The lands of Peru have been occupied for thousands of years — the country is one of the cradles of civilization. So while a far more complete list is far more comprehensive, here are 7 cool Peruvian icons to get you thinking about all the rest!

When you mention Peru to someone — anyone – they may conjure an image of Machu Picchu, the soaring Andes or the steaming Amazon Rainforest. But, of course, these images don’t capture the country’s diverse culture and rich (even ancient) history, or the great contributions Peru and Peruvians have made to the wider world.  Here are just seven of the many that have emerged from Peru worth taking a look at:

Admittedly, professional surfing is something of a world unto itself. But if you’re dialed into that universe — as an athlete or spectator — you may very well know of Sofía Mulánovich, who won her first ISA World Surfing Games Gold back in 2004, becoming the first surfer (male or female) from Latin America to win a world title.

Mulánovich didn’t accidentally fall into surfing stardom. Born in Lima in 1983, she learned to swim at the age of three, was bodyboarding by age five, and winning local contests against the boys by age 12. Little wonder that by 1998, she won the Pan-American Championships. She took on many of the world’s best surfers — and won.

All this winning and good sports(wo)manship earned her a place in the Surfers’ Hall of Fame in 2007. Incredibly, after first winning the ISA World Surfing Games Gold in 2004, she won it again 15 years later, in 2019! Her spirit and grit isn’t just an inspiration to girls and women around the world, but to all of us.

This Peruvian singer may have been born in the not-so-distant year of 2001, but she’s already having a lasting impact on her society, and beyond. Flores came to prominence on YouTube in 2014 when she posted a video of her singing “The Way You Make Me Feel” (by Michael Jackson) in Quechua. It blew up!

Her music is thoroughly modern, inspired by trap and rap music, yet grounded in many local Indigenous sounds and instrumentation. Of note is that she didn’t grow up speaking Quechua, the widest spoken Indigenous language in Peru (about 3.8 million speak it, which is 13 percent of Peru’s population).

In fact, she had to enlist the aid of her grandmother to translate the song into Quechua, and this has begun an open conversation about the perceptions of speaking Indigenous languages. Some parents have skipped speaking their native language at home for fear it would handicap children when trying to get ahead in the world.

But Flores has embraced it, and has continued to sing and learn Quechua (she composes in Spanish, then translates into Quechua with the assistance of linguists and her grandmas). As she inspires more musicians to sing in their mother tongue (and grandmothers’ tongue!), perhaps there will not only be new expressions of music and art, but also a resurgence in pride and a recognition of the intrinsic value of all languages spoken. Watch the video for her song, Tijeras, and check out her Facebook page here. Definitely someone to watch!

In the world of food, this guy is a real player, with restaurants in major cities around the globe, from Lima and New York to Barcelona and Doha – he’s become a de facto ambassador of Peruvian cuisine! 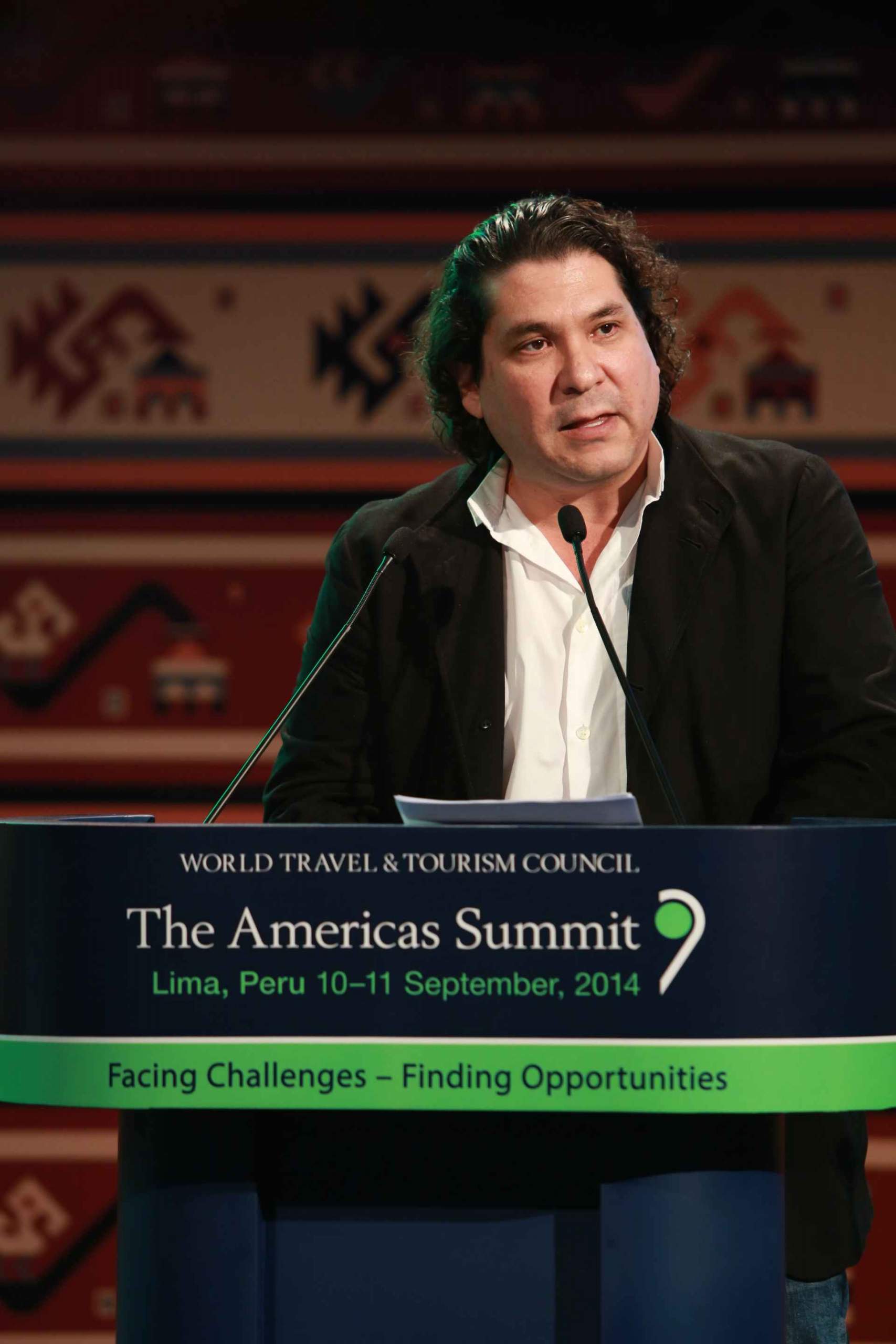 He may have studied cooking at the famed Le Cordon Bleu in Paris, but it was his move back to Peru in 1994 that elevated his food game. 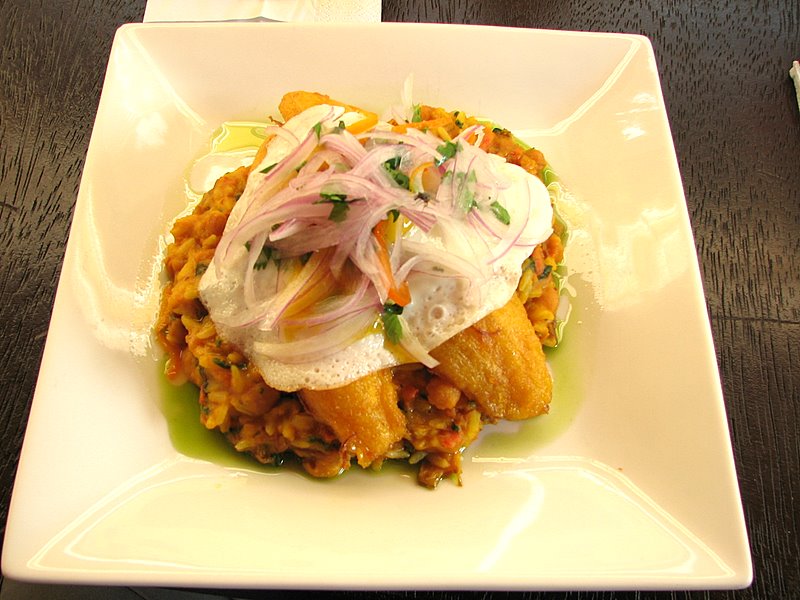 Along with other innovative chefs, Acurio developed what came to be known as the cocina novoandina, which fused contemporary techniques with the foundational food ingredients native to the region (from the Andes Mountains to the Pacific Ocean to the Amazon Rainforest). The movement has not only helped invigorate local agricultural producers and created a sense of regional pride, but it has expanded the palates of foodies all over the world.

It may not sing or talk, negotiate peace treaties, or surf big waves, but this Peruvian super-food has made its mark on the world.  The United Nations went so far as to say quinoa (pronounced keen-waa) was a key to food security, and declared 2013 to be “The International Year of Quinoa.” 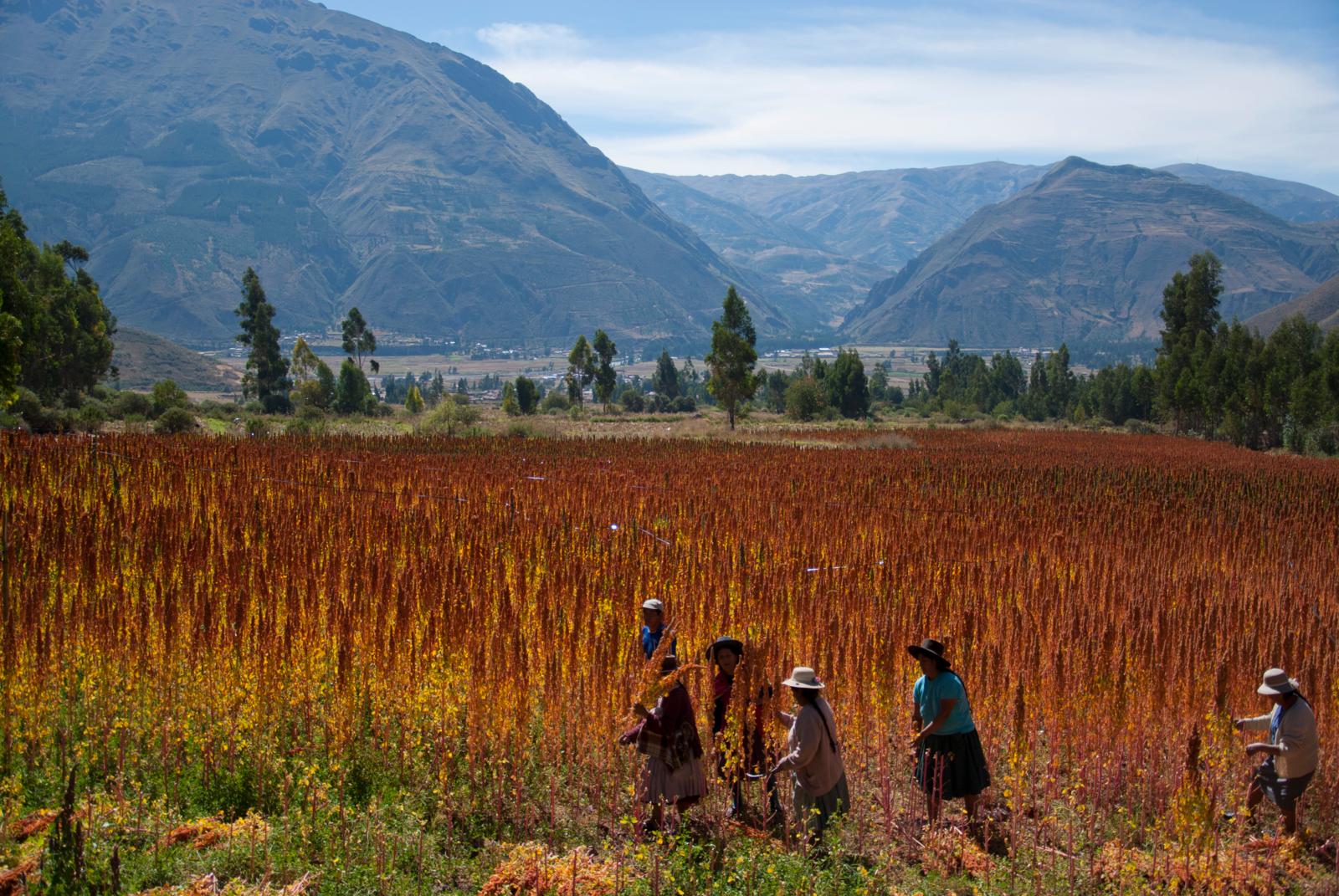 Quinoa: from field, to harvest to plate! (Flor Ruiz/PromPeru) 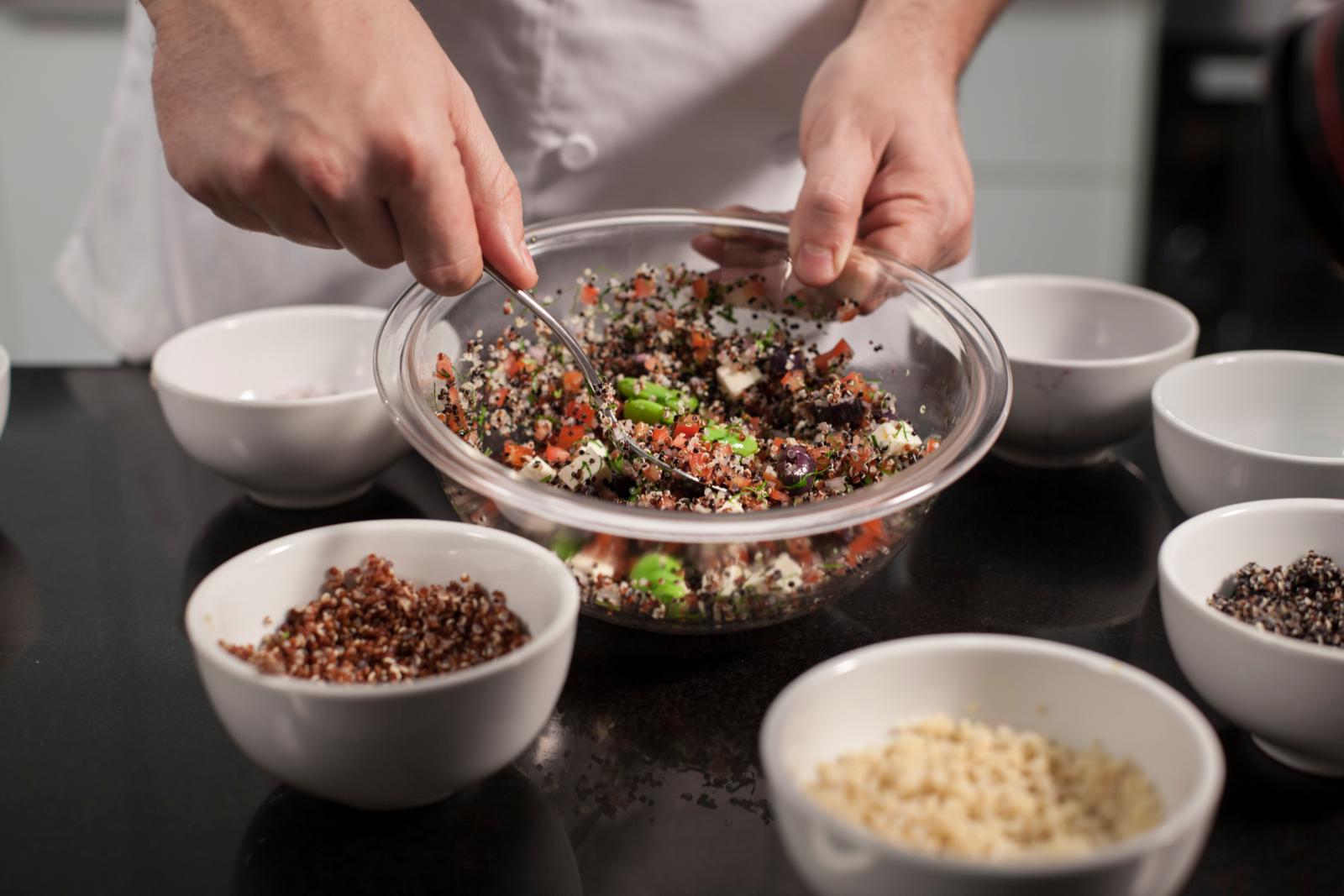 The nutritional profile of quinoa is impressive: it’s high in fiber, a good source of protein (twice that of rice), and high in magnesium, B vitamins, iron, potassium, calcium, phosphorus, vitamin E, and various antioxidants. From a culinary standpoint, it can be used as a side dish, added to soups and salads, made into pasta, and even fermented to make beer. And because it’s gluten-free, quinoa is suitable for those with gluten intolerance.

The quinoa plant originated in the Andes, and is thought to have been domesticated between 5,000 and 7,000 years ago (according to The Food and Agriculture Organization of the United Nations). Part of what makes quinoa such an important plant for the world is that it is very stress-tolerant and can be grown in fairly extreme conditions (read: climate change).

In more recent years, cultivation of the quinoa plant has spread to over 70 countries, including Canada, France, England, Sweden, Denmark, Kenya, and India (though Peru and Bolivia still account for 92% of production). Perhaps now is a good time to pay homage to the farmers of the Andes, who have kept their agricultural traditions alive and protected the mighty quinoa seeds for future generations.

The Potato | The Spud that Feeds the World 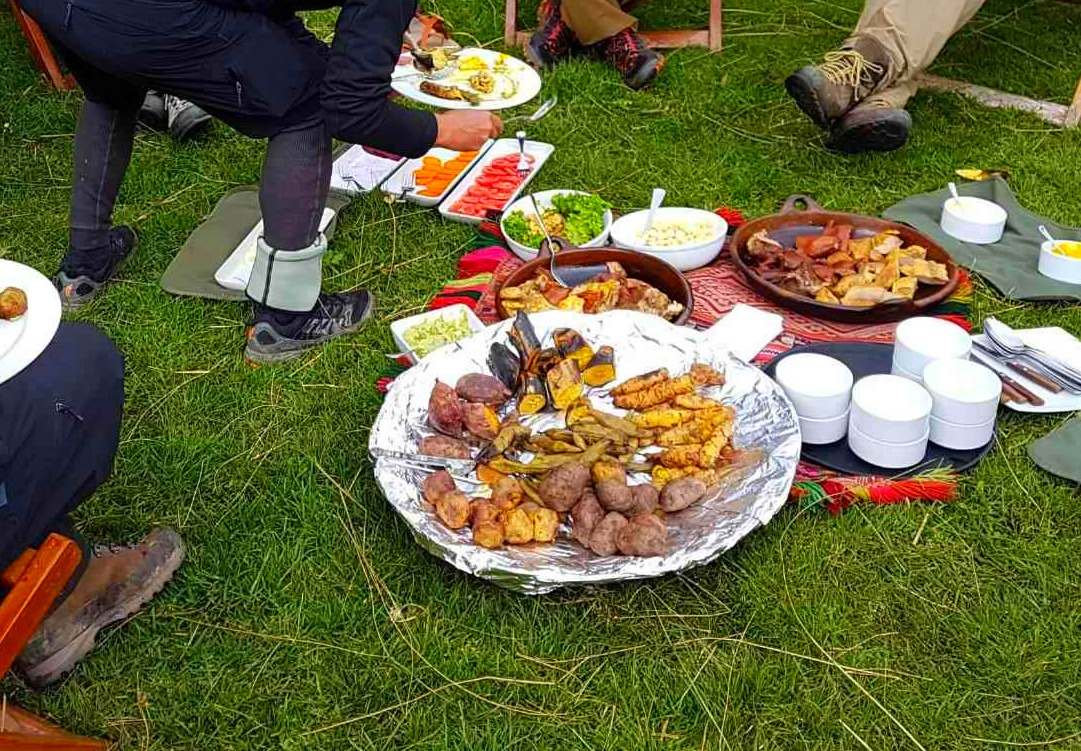 The potato is native to the lands of Peru, which is also known for its many varieties — the yellow tubers in this photo were especially divine! (Outpost)

I know. I keep coming back to food and plants. But let’s face it, food is life, and so much of exploring a culture or country is about exploring its culinary staples and talents! And incredibly, the humble potato, with its many varietals, all appear to have originated from a single source in the high Andes of southern Peru (and northwestern Bolivia).

Although domestication of the potato is thought to have occurred approximately 7,000 to 10,000 years ago, it was only in the 1500s that the potato went global, when the Spanish conquerors brought the potato back to Europe.

If you thought the potato would become an instant hit, you’d be wrong. Apparently, it took about 100 years for wary Europeans to embrace the hardy spud as a food staple. But when they did, they went all in. At present, potatoes are the world’s fourth-largest food crop after corn, rice and wheat. (Van Gogh even famously painted “about” the spud in his 1885 painting The Potato Eaters.)

In Peru, there are more than 3,800 varieties of potatoes, which all have their own unique taste and texture. It’s no wonder then, that the potato remains a central ingredient in so many dishes throughout Peru.

No one is ever going to shame you for not knowing who Pedro Paulet is. I certainly didn’t have a clue until I stumbled on his name. Born in 1874 outside of the city of Arequipa in southern Peru, Paulet began demonstrating a curiosity and a skill for scientific discovery very early in life, particularly as it related to flight.

At age 20 (in 1894), he was given a scholarship to study engineering and architecture at the Sorbonne in Paris, where he kept company with many great minds in chemistry and physics. Paulet’s obsession with flight and deep space led him to design and experiment with various propulsion systems, including a rocket engine running on liquid fuel rather than propelled by gunpowder, which was still the propulsion of choice at the time. 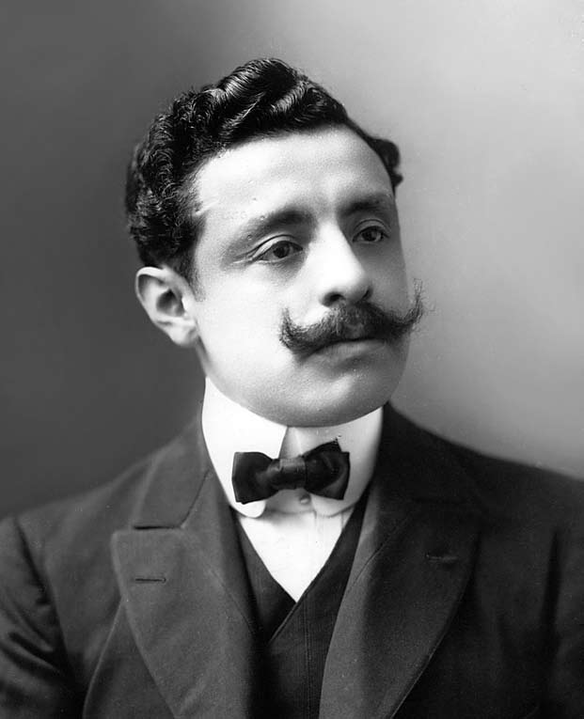 The historic global impact of this invention cannot be underestimated. However, there is still scepticism in some scientific circles about Paulet’s accomplishments, given there wasn’t concrete proof he invented the liquid fuel motor in 1895 or the modern rocket propulsion system in 1900, as he claimed.

Nonetheless, it is undeniable that Paulet was a person of incredible vision. Perhaps his great niece, Sara Madueño Paulet de Vásquez, said it best when she wrote in 21st Century Science and Technology Magazine: “In the National Air & Space Museum in Washington, D.C., we can see a small plaque honoring the memory of the Peruvian Pedro Paulet, as one of the fathers of aeronautics. But Paulet deserves more than a plaque in his honor.

He is a model for the present and future generations of the world, but especially for the so-called ‘Third World.’ He was one of many children born into a mestizo family living in one of the thousands of forgotten little villages in the Peruvian jungle, who demonstrated through his contribution to universal science that every person is capable of achieving the highest level of human creativity.” Here’s a more fascinating bio of him by Boris Miranda of BBC News | Mundo.

The hunt for Peru’s healing plants dates back well before clocks kept time. For thousands of years, in fact, the Indigenous people of the region experimented with a vast number of medicinal plants found in the Andes Mountains and the Amazon basin. Peru’s immense biodiversity literally possesses some of the most extraordinary compounds known (and unknown!) to science.

These native plants have been found to cure headaches, heal infections, even treat malaria, as in the case of quinine, an extract from the bark of the cinchona tree. Early European records describe how Indigenous communities used the extract as a muscle relaxant, as well as to combat chills and fever. In the 1600s, this herbal medicine was brought back to Europe by Spanish Jesuits and used to treat chills and eventually malaria

The cinchona bark became an incredibly valuable commodity in Europe. The region around Rome, for instance, suffered terrible epidemics of malaria, and some historians even argue that malaria contributed to the decline of the Roman Empire by literally sapping the strength of its military and workforce.

Medicinally, quinine is also used to treat night-time leg cramps, lupus, and arthritis. It’s also a key component in tonic water. For a fascinating read on the medicinal plants of Peru, check out Canadian ethno-botanist Wade Davis’s book One River, which recounts some amazing history, and the complex techniques innovated by Indigenous people to extract the medicinal essence of the plants. ♦

When You Lose Your Phone Abroad, Don’t Also Lose Your Mind

Akso.firget to mention DrAlcidez Carrion who sacrificed his live in order to find a cure for a sickness that was killing the population.

Why you didn’t mention Juan Diego Florez? He’s way more famous than Renata Flores (I don’t have any idea who she is)

Well, do your homework then. Or is it because she is indigenous? Typical.
Also the article says 7 icons to get you thinking. Not the ONLY 7 icons.