10 Top Virtual Museum Opportunities | What to See When You Can’t, Then Can

With more museums, and more content by museums, online than ever before, you can see masterpieces and learn about the world’s diverse cultures from your stay-at-home, helping-heal-the-world bubble.

Exactly a year ago, optimistic, non-fatigued versions of ourselves sang from balconies, learned to cook and believed in a two-week effort to “flatten the curve.” Back then, with many cancelled flights, missed vacations and closed institutions, we embraced the idea of visiting museums online — to experience something new and fight quarantine boredom.

While some things we can leave behind in 2020 (at-home haircuts, I’m looking at you), others could use a 2021 upgrade — providing the memory doesn’t trigger any early-pandemic flashbacks. As we inch closer to putting this chapter behind us and towards (hopefully) acquiring more freedom of movement (something, I think, we will never again take for granted!), it’s a good opportunity to revisit the idea of virtual museums, with new content available and a renewed outlook, and to help plan or inspire future travels.

To get you started, I’ve scoured Google Arts and Culture, a collection of over 1,200 museums and archives from around the world (which has more than doubled since last year).

The platform offers photos, descriptions, virtual tours (simply “tour” by moving your mobile device) and even augmented reality for some locations — the next best thing to visiting in person, really. To see any selected item in-situ, click the “view in street view” button on its page.

If you are starting with the virtual tour, click the box in the left corner to see an item’s description. Search by country and use your lockdown time wisely to map out your visit so you’re ready to hit the ground running when travel opens again. Here’s a round-up of my top picks, perhaps to fuel your post-pandemic inspirations:

This museum/art gallery, known as La Casa Azul (the Blue House), is located in Mexico City’s colonial Coyoacan neighbourhood. It contains Frida Kahlo’s most celebrated works, photographs and personal items, in the very house where she was born, grew up, painted, and passed away. When I visited in 2019, I recall her bright studio looking completely untouched — decorations, books and art supplies on display.

There is an easel set up for her wheelchair (Kahlo contracted polio as a child, and was gravely injured in bus accident when she was just 18), and mirror she used for her self-portraits on her desk. Her tropical garden is still thriving and contrasts with the house’s blue exterior. Visits to her garden and studio are available virtually, as well as her kitchen, which is full of folk trinkets, and a temporary exhibit on her wardrobe. 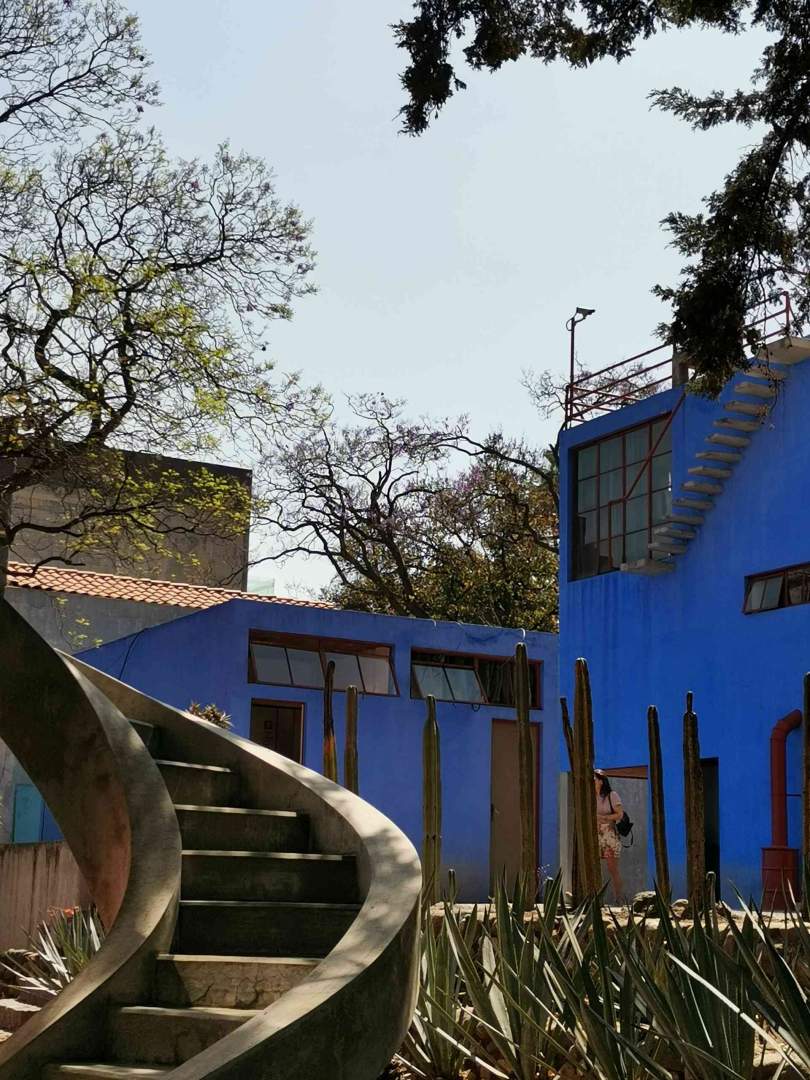 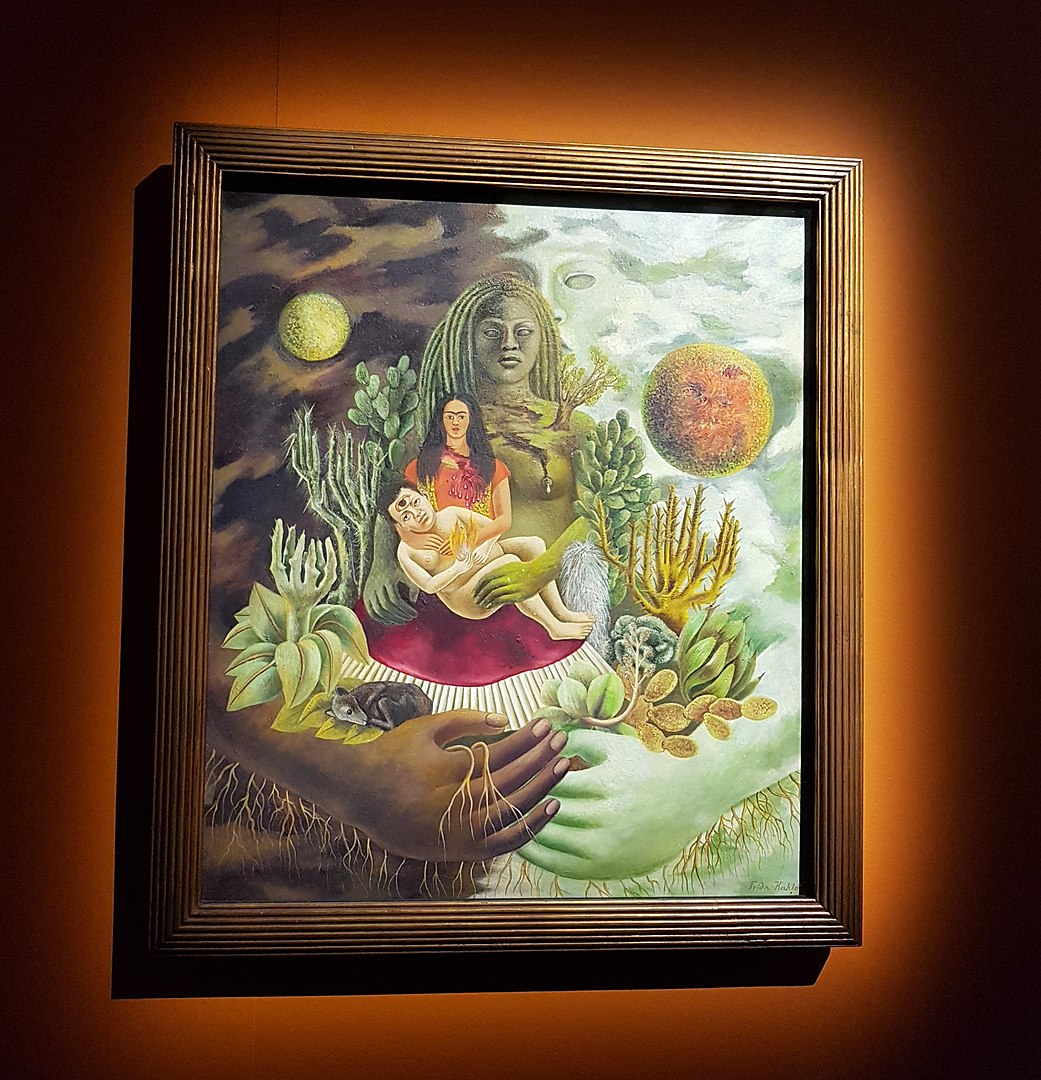 Frida Kahlo’s painting: “The Love Embrace of the Universe, the Earth, Myself, Diego and Senor Xolotl,1949. (Credit: Ambra75/Creative Commons)

Second only to the Louvre, The Hermitage owns one of the largest art collections in the world: three million pieces! Set in charming St. Petersburg, a European-influenced canalled city on the Baltic Coast of Russia, the complex is massive — it’s made up of six former palace buildings. It houses Egyptian and classical antiquities, prehistoric, Western European, Russian, and modern art, featuring works by Rembrandt, Picasso, and Gauguin — just to name a few. 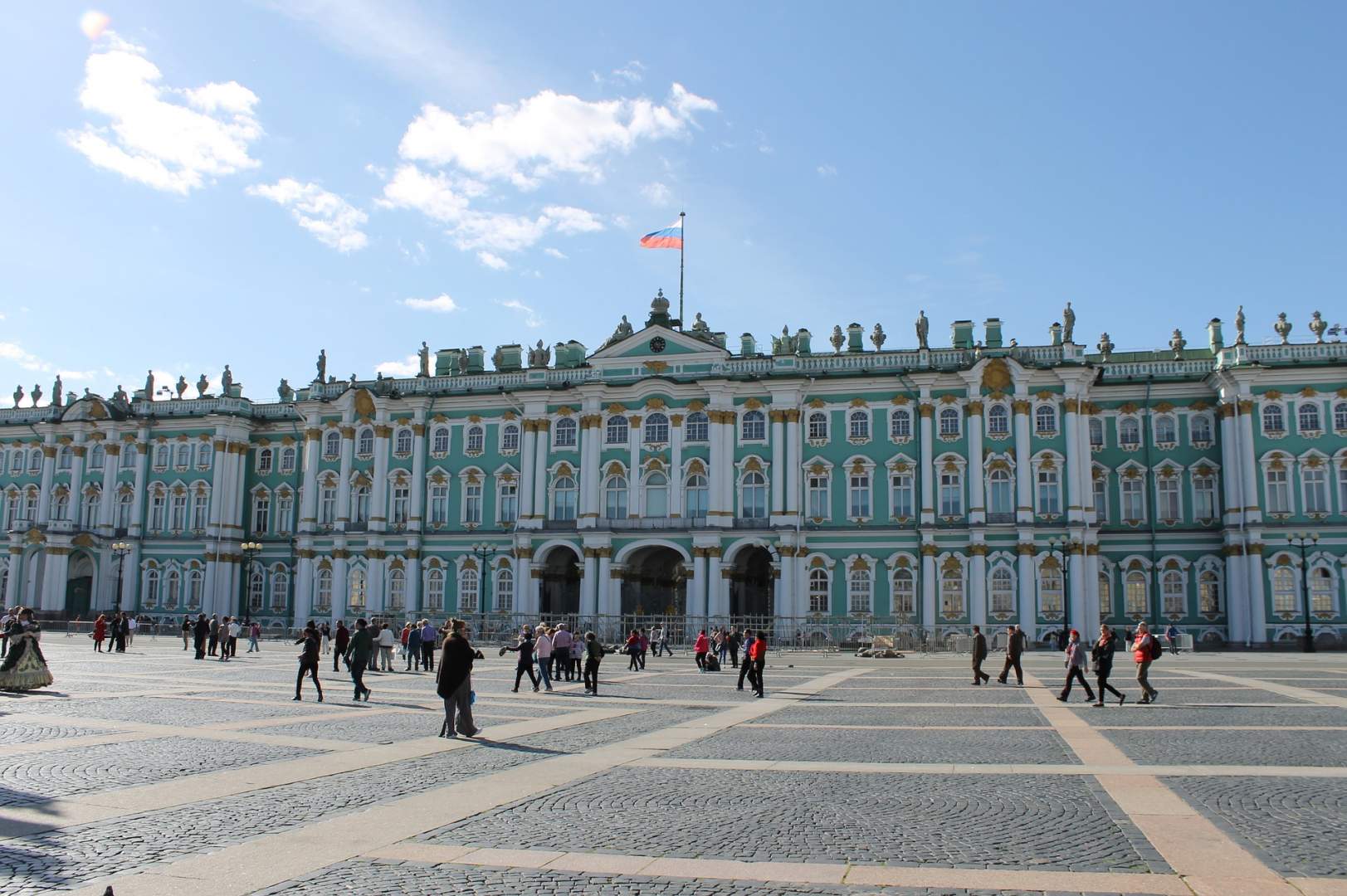 The Hermitage in St. Petersburg is actually a complex, which includes The Winter Palace, and is the second-biggest art museum in the world. (A. Grishin/Pixabay)

The place itself is art: chandeliers, mosaic floors, marble columns, intricate ceilings. Virtually, you can get up close and personal to paintings and artifacts. Years ago, I spent an entire day there in person, getting lost in the 360 rooms — and it simply wasn’t enough. So, if you’re planning a trip to this museum at some point in your future, a virtual visit is recommended to get your bearings.

Virtual must-see: “The Holy Family” by Rembrandt was copied throughout Europe, but this is the original (dated and signed by the artist).

India’s premier collection of cultural heritage, located in its capital city, spans three floors and 5,000 years of Indian art, Buddhist sculptures, and Central Asian antiquities — including relics from the Buddha. The virtual collection is vast, with 75 online exhibits and nine museum views. I used my virtual visit to learn about traditional miniature painting, which brought fables and folk stories to life in small scale (at times using brushes consisting of a single bristle!). Other notable artifacts include terracotta temple sculptures, bronze statues, and ivory carvings. Also check out its Museum at Home section which has some great videos. 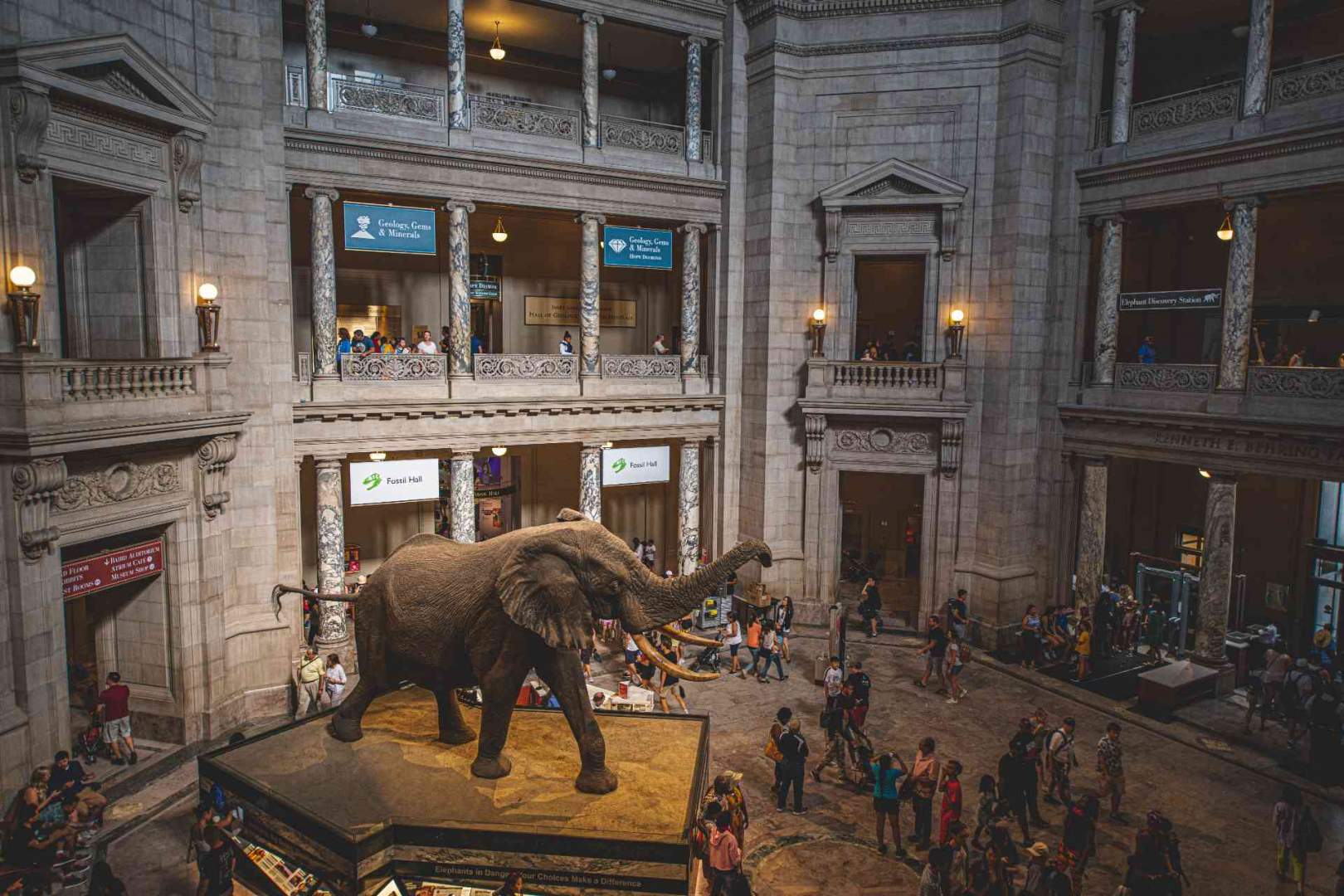 The Smithsonian Institute is the largest museum in the world. (Mana/Unsplash)

Located within the Smithsonian Institution, the largest natural history museum in the world lies on D.C.’s National Mall and fits into 18 football fields — or in this case, your smartphone or computer. An online exhibit called “Understanding the Natural World and Our Place in It,” is a comprehensive introduction to the museum’s 145 million artifacts, including butterfly specimens, Neanderthal fossils, mineral collections, and an elusive giant squid. During my virtual visit, I learned about the giant panda and how the species has developed a handy wrist thumb-like bone to hold onto plant stalks. Two panda thumbs up to learning new facts!

Virtual must-see: Take advantage of the augmented reality features for an immersive experience of specimens.

No visit to Amsterdam (online or offline) is complete without viewing the world’s largest collection of Van Gogh originals. The gallery, located in Museumplein — the museum quarter of the bike-friendly city — has 200 paintings, 500 drawings, and 750 letters to bring you inside the troubled mind of the Dutch artist, who famously cut off his left ear in a fit of rage. When I visited in person, a few years ago, I was struck by how his landscapes, flowers and self-portraits are brought to life by such vivid brushstrokes. The virtual version does his work justice — zoom in to see high-resolution details and paint textures. There are two online exhibits, on his favourite books and his love life, and five virtual museum views.

Virtual must-see: “The Bedroom” painting is complemented by a hand-written letter and a video outlining research on the painting. 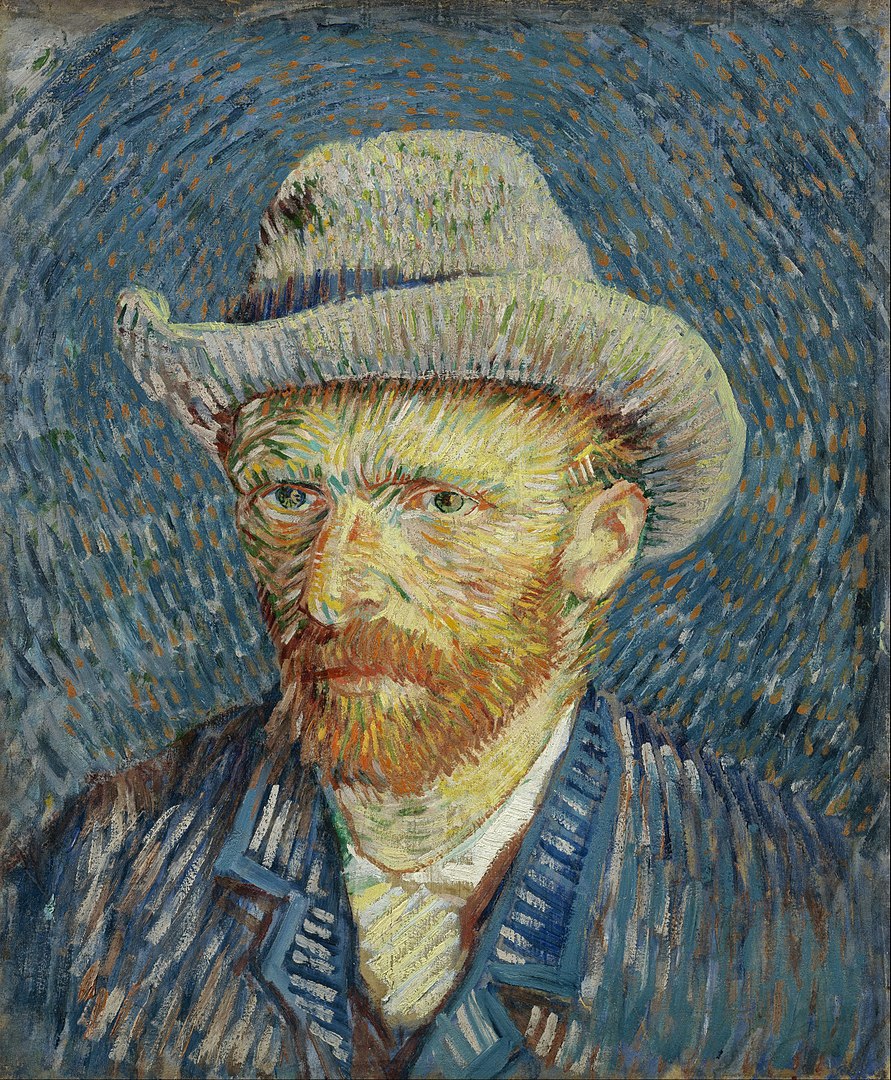 Vincent Van Gogh’s “Self Portrait in Grey Felt Hat” at the museum in Amsterdam.

The specially-constructed dome called the Shrine of the Book holds the oldest biblical manuscripts in existence, dating back 2,000 years: the Dead Sea Scrolls. They were found in ceramic jars in various caves on the West Bank between 1947-1956, and the original seven scrolls are on display here (on continuous rotation to limit light exposure). The museum, located on a hill in Jerusalem’s Givat Ram district also houses artifacts from the Holy Land, Jewish and international fine art, including works by Cezanne and Degas. Did you know that tassels (called tzitzit) on clothing are knotted symbolically as reminders of God’s laws? To learn more on dress code in the Holy Land, I recommend their online exhibit “Questions on Identity.”

Virtual must-see: View the Isaiah manuscript A, one of the oldest and most intact of Dead Sea Scrolls. 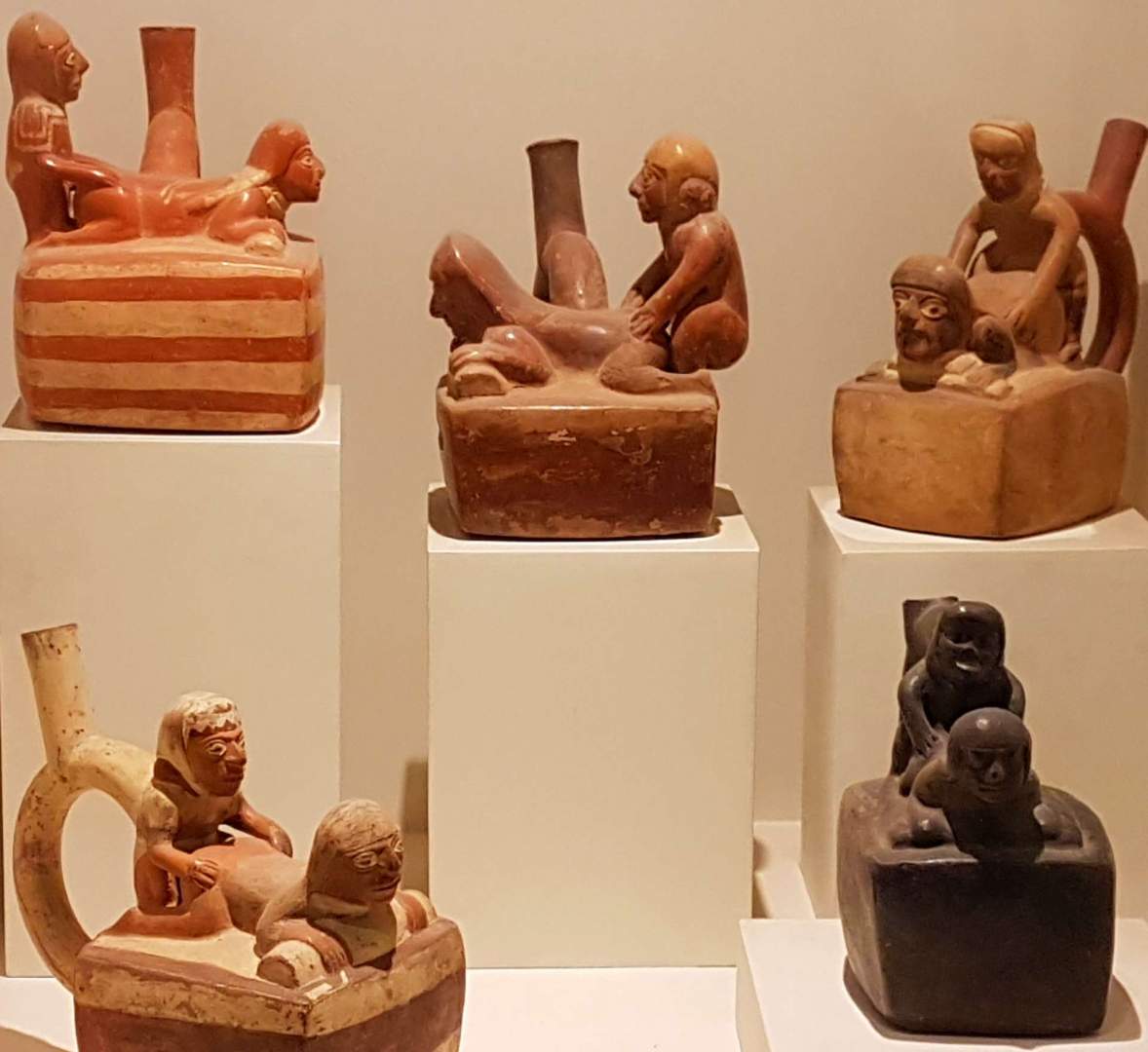 The virtual tour takes you on a walk through time, through Peru’s 5,000 years of Pre-Columbian and Pre-Inca eras, as well as when the Incas had their empire. One of my favourite pieces is this remarkable Incan quipu. Since the Incas had no written language, they communicated through a knot system, which contained information based on colour and distance between knots.

Virtual must-see: “Death in Ancient Peru,” an online exhibit on the symbolic depictions that show a deep reverence for the sacredness of the life-cycle.

This group of museums, monuments and sites, which includes the Nairobi National Museum and the Karen Blixen Museum (the author’s farmhouse depicted in “Out of Africa”), has the strongest online presence — with a whopping 84 museum views, 172 online exhibits, and 10,648 items! Online exhibits teach about the Butterfly People (the Samburu tribe) and African drumming, as just examples. The museum also has a room dedicated to teaching young people traditional techniques like beading, weaving, basketry, storytelling, and painting.

Virtual must-see: The virtual tour through the Nairobi National Museum is a thorough overview of instruments, clothing, jewellery, and artifacts from the rich cultures of this ancient part of the world.

The Palace Museum is located within the sprawling imperial city in Beijing that housed the emperor —better known as the Forbidden City because of its limited access to commoners. The palace complex-turned-museum (built from 1406-1420), consists of 980 buildings, extends over 180 acres, and contains more than 1.8 million pieces of art — ceramics, porcelain, bronze works, sculptures and more.

I recommend exploring The Hall of Supreme Harmony, the largest building in the compound. The golden dragon motifs, in the interior and exterior, are impressive, as is the dragon throne, where the emperor sat during important ceremonies. The 1,000 dragon waterspouts decorating the terrace put on a dramatic display when it rains.

Virtual must-see: “The Eternal Territorial Integrity” gold cup is one of its greatest treasures. It was used in the Qing dynasty to mark the lunar new year, during midnight festivities.

The Renaissance city of Tuscany is synonymous with the Medici family, fine art, and stunning architecture. Its prized jewel, the Uffizi Gallery, is truly majestic, with its statue-lined hallways, gold-domed interiors, and frescoed ceilings. 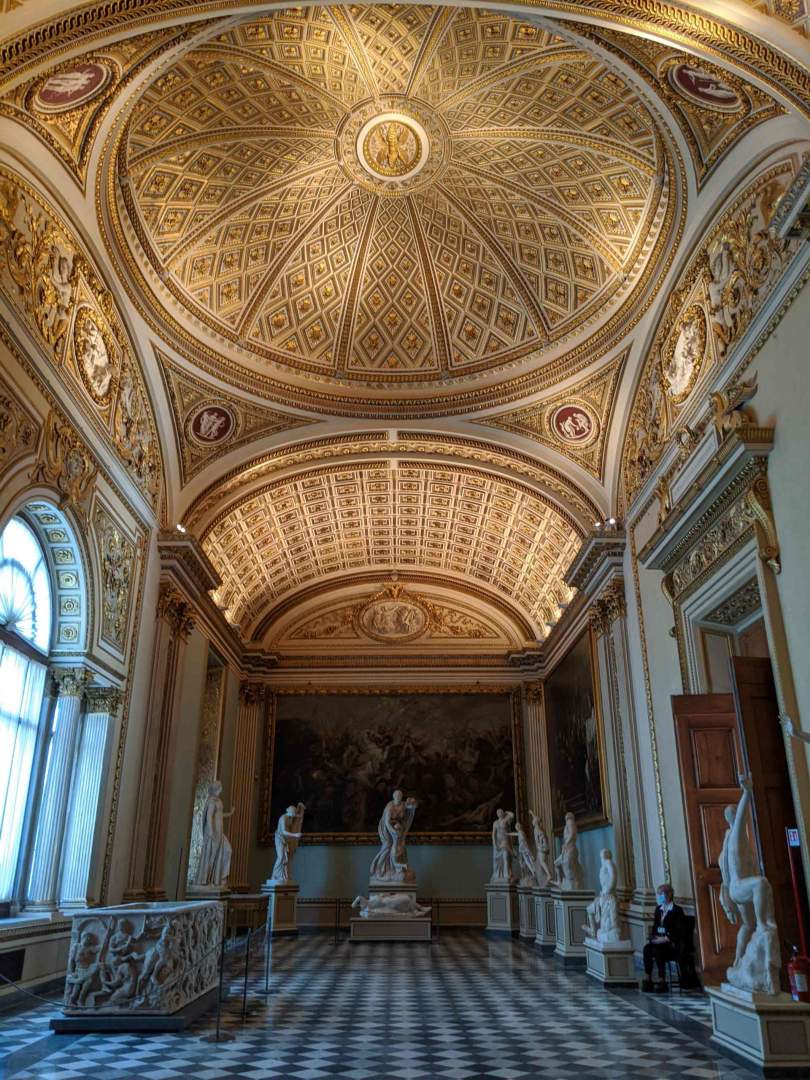 The Uffizi Gallery in Florence (Tzenik/Unsplash) 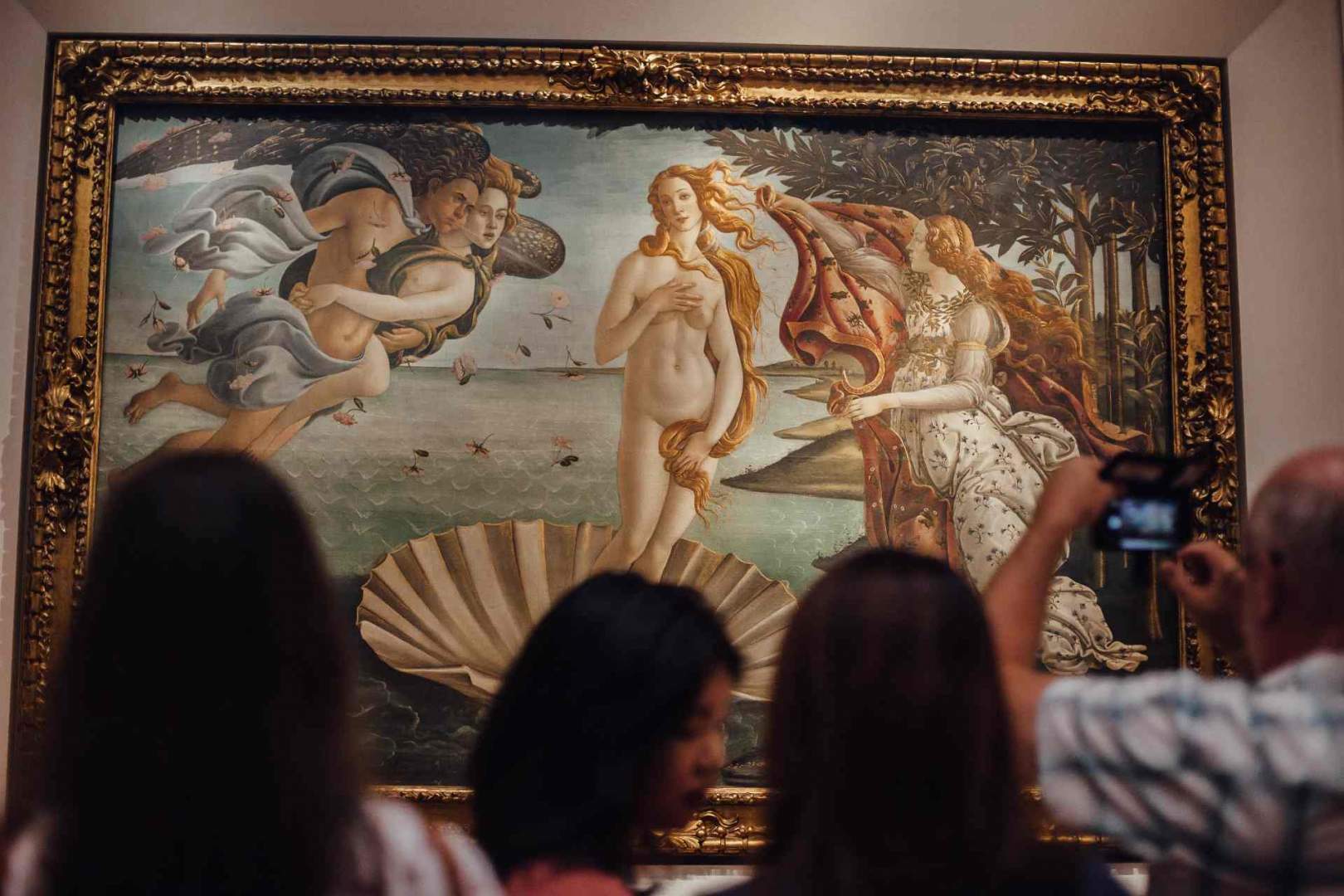 “The Creative Process Behind Federico Barocci’s Drawings” online exhibit gives a behind-the-scenes look into the anatomical studies that precede these masterpieces. The virtual tour takes you through a labyrinth of gallery rooms, revealing works by the greats — Leonardo Da Vinci, Caravaggio, and Michelangelo.

Virtual must-see: Hands-down, it is Botticelli’s “Birth of Venus” — painted on canvas using tempera, made of pigments and egg yolk, to create a unique transparency effect. I have yet to see it IRL, and was surprised with its larger-than-life size during my virtual visit (it measures nearly three metres!).