In 2010, I flew down to the landlocked nation of Bolivia in South America on assignment with the non-profit organization, Street Kids International. There were, of course, many heartbreaking stories of street youth, but I also came to learn the country possessed a great deal more. It was a land of profound geographical contrasts—from deep steaming jungles to the rarified air of the Andes. (I wrote about running around Lake Titicaca in Outpost issue 84.)

More than 17 percent of Bolivia’s territory is now protected through a patchwork of reserves and parks, including Toro Toro National Park, with its dinosaur fossils, and the mountainous Sajama National Park, which is home to its namesake volcano, the highest peak in the country (6,542 metres).

During my travels, I hopped a train to the high-altitude nature preserve of Salar de Uyuni, the world’s largest salt flat, a 10,490-square-kilometre expanse of blinding whiteness.

Given the immensity of the place, I decided to join a jeep tour, which is a practical way to cover a lot of ground. Being out on the vast open plains staggered the senses and forced me to recalibrate my place in the universe. I am but a grain of salt in a vast sea of salt! 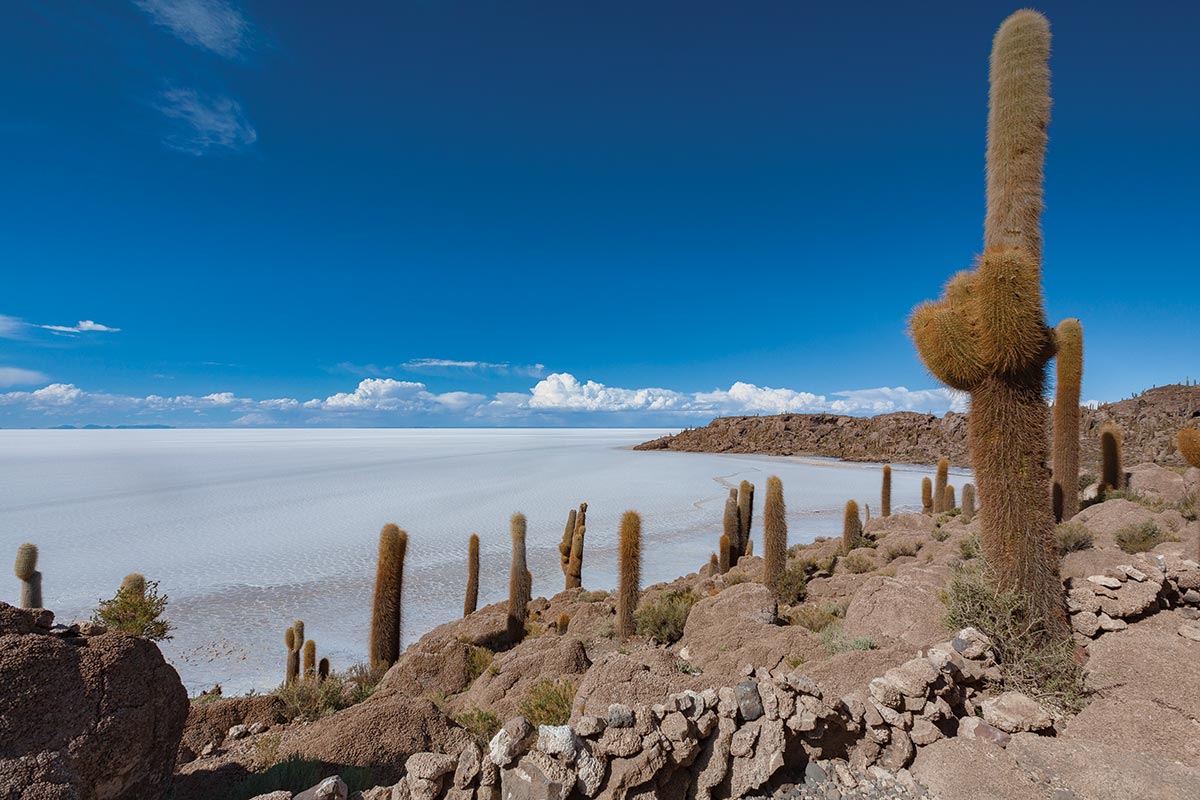 One of the unique features of the Salar is just how flat it is. Over the entire surface of the plateau, the elevation varies by only one metre! Its unique physical characteristics have spawned a whole subcategory of forced-perspective photography among travellers (think: tiny backpacker being squished by giant fingers). I chose a one-day tour, but there are also overnight excursions with backcountry camping, which would be next level awesome.

While in Bolivia, I heard a great deal about a place called “Las Yungas,” to the point it became almost mythical. It is, in fact, an ecoregion spanning the eastern slopes of the Andes, and encompasses both alpine zones and Amazon forests. The landscape is steep and lush and includes several national parks and reserves. This region draws international thrillseekers who venture down its legendary Death Road on mountain bikes (at their own peril)—a snaking 69-kilometre “highway” that begins about 4,700 metres up, surrounded by snowcapped peaks, and winds its way down 3,600 vertical metres to the monkey-loving jungle below. Did I mention the countless hairpin turns with thousand-metre cliffs awaiting you?

In the end, I didn’t get the chance to visit the mythical Yungas (or many of the other parks on offer). Hence, Bolivia remains high up on my travel list. So in 2018, consider spending time exploring a park or nature reserve. Wild spaces not only provide us with a true outdoor experience, they also remind us that once, not so long ago, the entire planet was one giant wildlife preserve.

Can I Immerse Myself Somewhere Without Speaking the Language?