Rob Brodey has ran marathons and ultra-marathons, logged thousands of kilometres on trails, and undertaken multiday alpine runs. He’d be the first to tell you he’s not the most experienced trail runner …but, he has learned a few things along the way! Here’s the next installment in his How-To-Do-It series: Gearing it Up.

Text and Photos by Robert Brodey

Like the elephant hobbled by a tiny thorn in its paw, so too can the mighty trail runner be felled from something as small as a blister on the foot or an agonizing chafing point on the body. I may not be an elephant or a mighty trail runner, but when I was doing a 5-day, 170-kilometre trail walk-run around the Mont Blanc massif in France, Switzerland, and Italy in 2014, I nearly had to bail for not being proactive managing a single blister.

It was the morning of day three, with 75 kilometres or so already behind me, when I felt rubbing on my heel. But I’d just missed a turn-off and was anxious to find my way back onto the route, so I ignored the alarm bell in my shoe. Most likely some grit had worked its way into the shoe and now was working my heel over like a skilled carpenter with sandpaper. 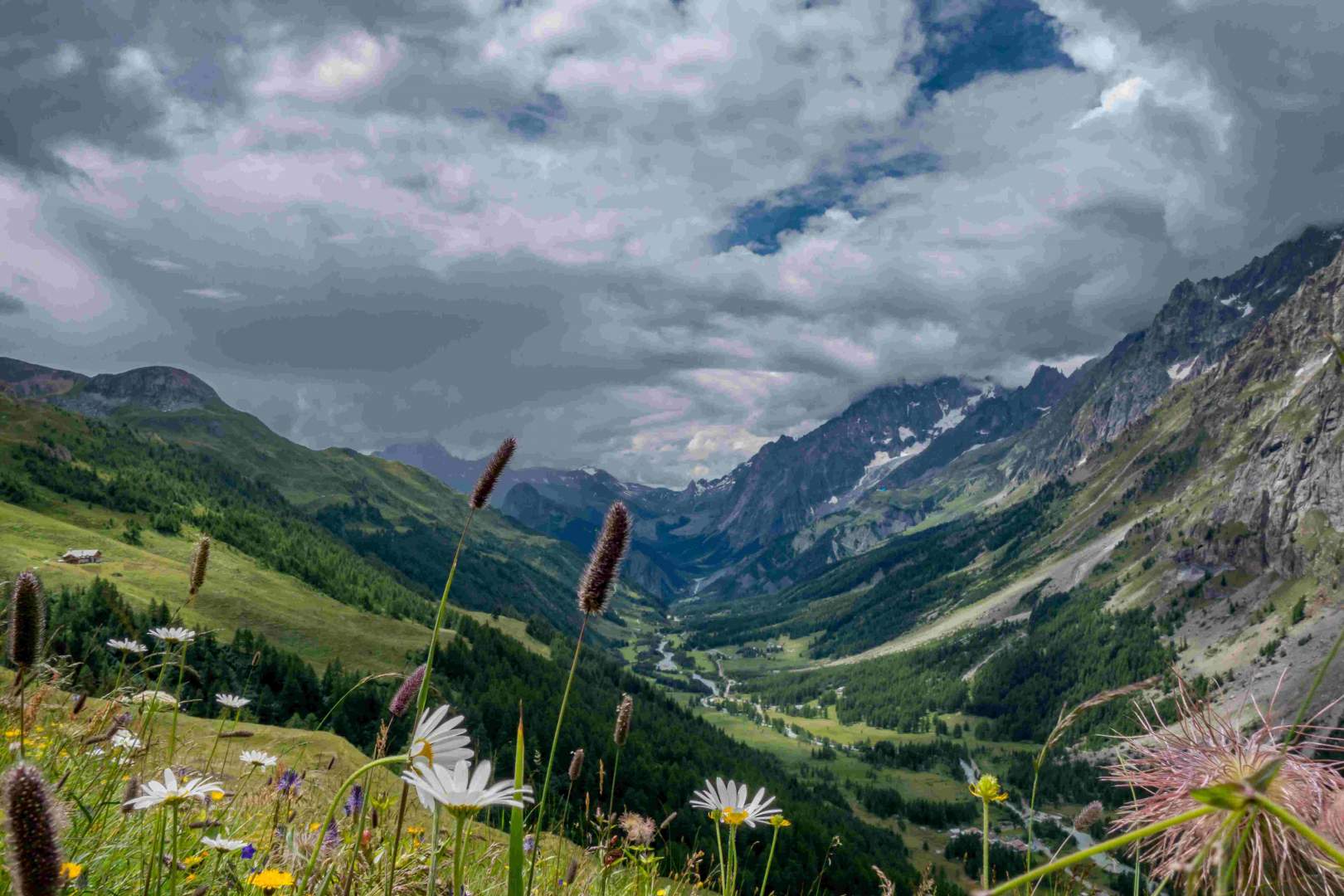 A reason to trail run: for the views, like this one the author took in doing the Tour de Mont Blanc.

When I finally did stop to address the issue, I was thinking about the long day ahead and didn’t take the time to properly clean and protect the heel. Big mistake. For the next 90 kilometres, I felt pain every step of the way.

Today is gear day, and I’m not going to blame the shoes for my blister debacle around Mont Blanc. That was on me. Still, while wearing the right gear may not make you, sporting the wrong gear could very well break you.

Although trail running continues to grow in popularity, trail running gear remains something of a niche market — and not an inexpensive one at that. In fact, when I decided to run my first ultra-marathon, I probably spent a few thousand dollars on specialized shoes, shorts, shirts, jackets, hydration systems, etc. 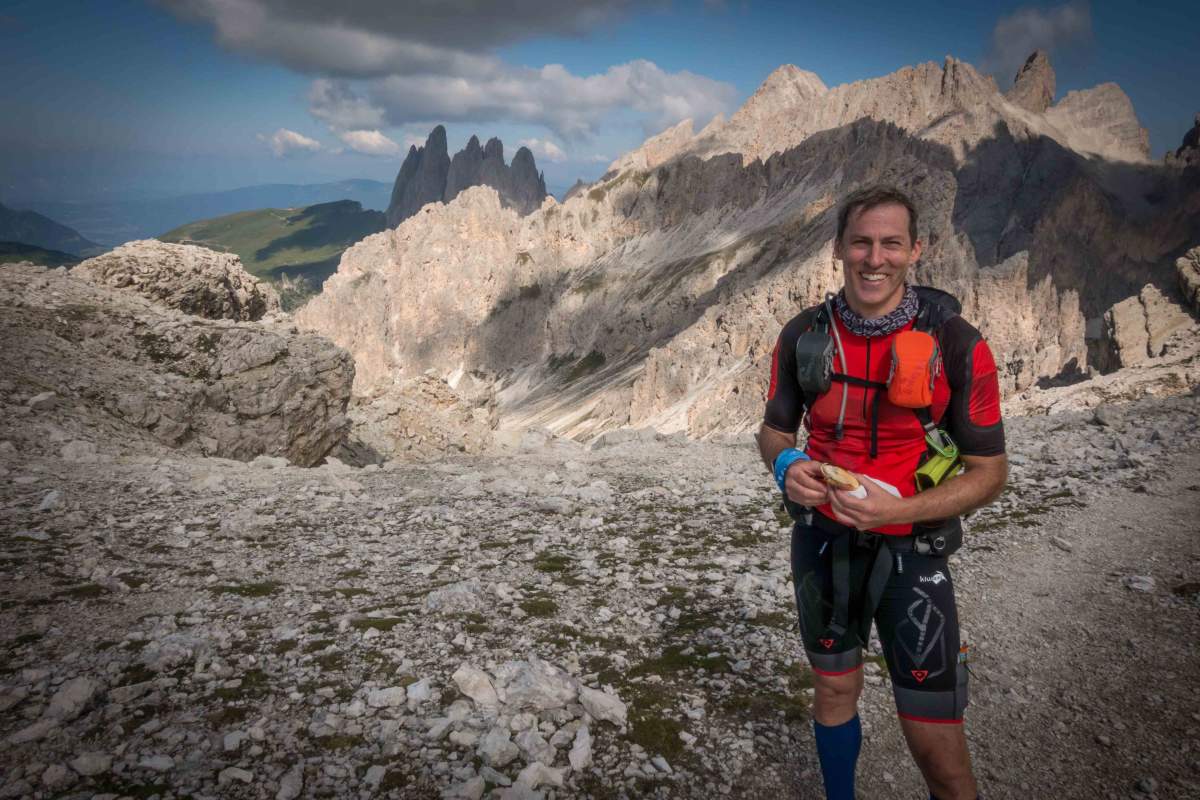 The author in the Dolomite Mountains: reusing gear that works for you.

It felt a tad excessive at the time, but the reality is I’m still using much of the same gear almost 10 years later (barring the shoes). So that’s a pretty good R.O.I. (Return on Investment).

So let’s start at the bottom: the feet.

In an earlier post I wrote about running form and landing on the heel vs. the forefoot. When you’re ready to invest in a pair of trail shoes, it’s important to understand where you land on your feet.  It will help you figure out the kind of shoe you need, particularly as it relates to “the drop” (a.k.a. “the offset”).

The drop is the height differential between the front and back of the shoe. If you’re a forefoot striker then you want less of an angle downward from tail-to-tip so that the foot naturally lands toward the front (somewhere between a 0 mm to 8 mm differential). 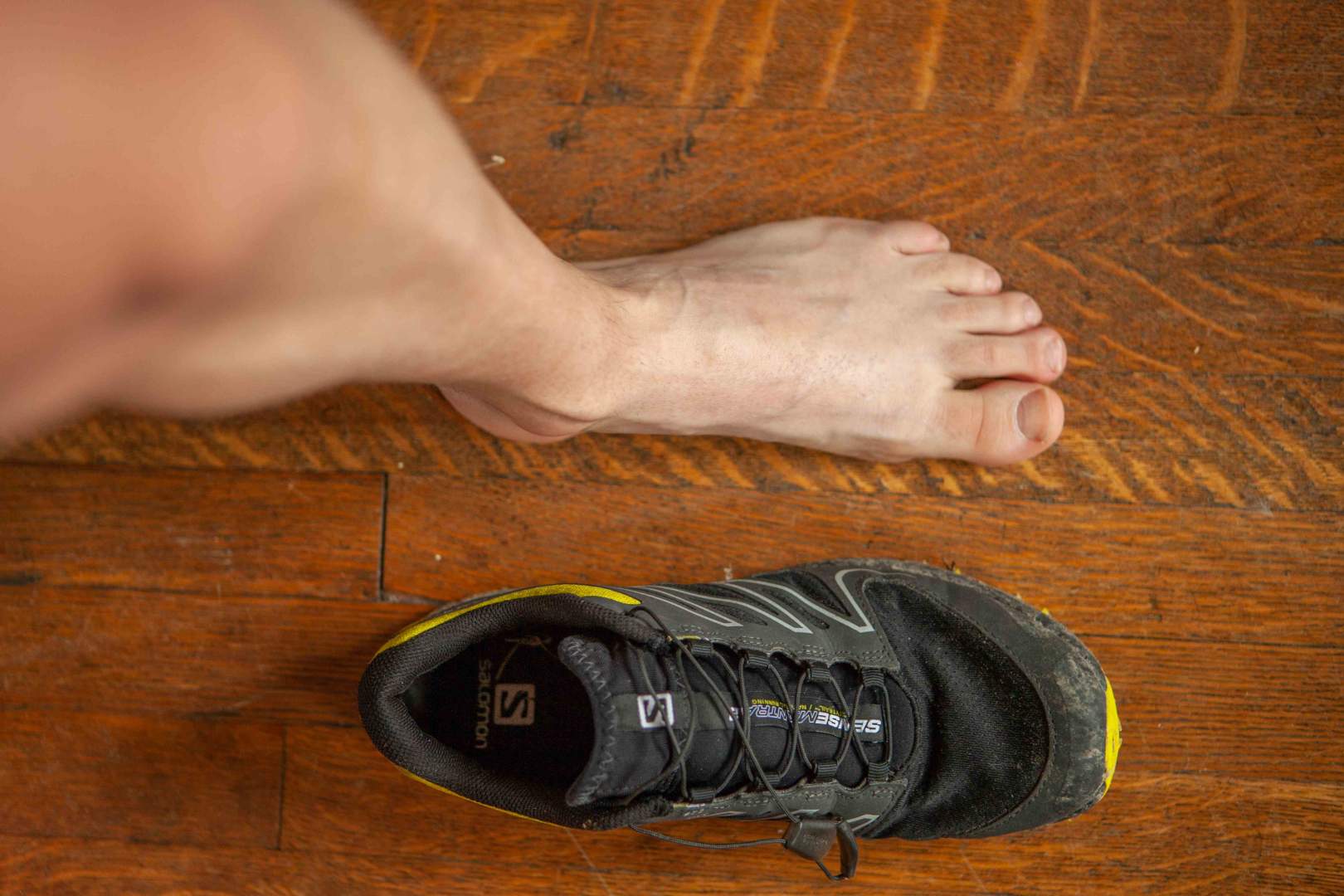 Getting the right fit for your foot is essential.

A heel striker, on the other hand, may go with a greater height differential (perhaps 10 mm+). They may also choose a higher “stack” — the amount of material between the foot and terra firma. This is typically anywhere between 19 mm and 45 mm from heel to ground for a heel striker, and 4 mm to 18 mm for a fore-footer.

Of course, the higher the stack, the less likely it is you can feel the ground.  What’s called proprioception. Arguably, being able to feel the ground becomes more important when you move from road to trail running. After all, no two footsteps are the same off-road. I’ve run in shoes that felt like having pillows strapped to my feet, cutting me off from crucial sensory information about my environment. Again, everyone has to decide for themselves what feels right for them. Often this takes some experimentation.

A few years back, while preparing to run in the Italian Dolomites, I discovered that my favourite trail shoes had been discontinued. I ended up buying five different pairs of shoes to test out before the trip. It was like a bad dating show on TV — but for shoes (and without all expenses paid), as I rejected pair after pair for various reasons.

I ended up running in the Salomon S-Lab Sense 6 (4 mm drop/18 mm stack). I loved them so much, I bought two more pairs. Soon thereafter Salomon discontinued them.  For nearly two years, I scoured the internet in search of them. Finally, thanks to a query I posted on an ultrarunning Facebook group, I found two more pairs for sale in Belgium. 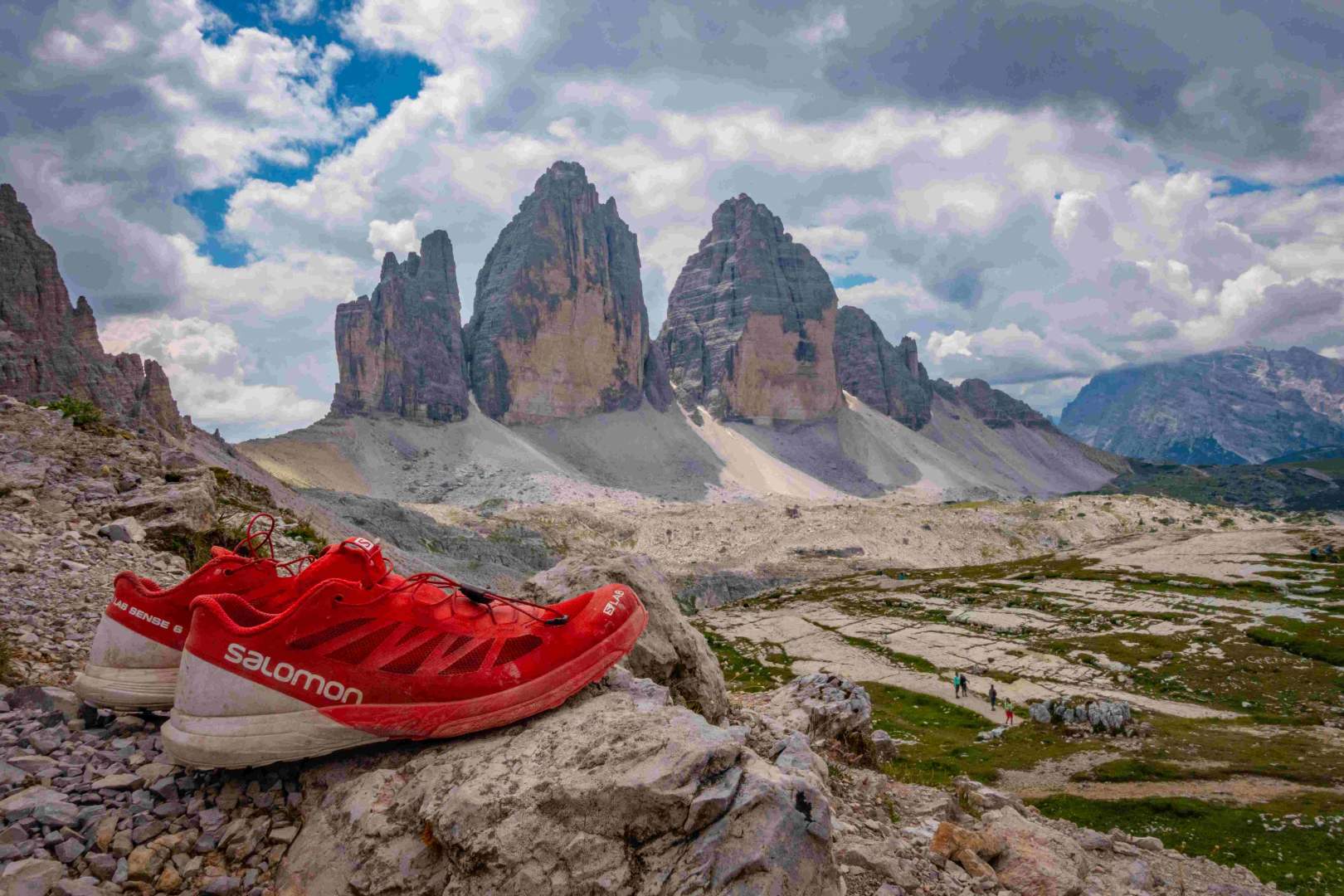 Unfortunately with trail shoes, it’s very difficult to know if the shoe is going to serve you well just by jogging back and forth across the store floor a few times. The real world is far more dynamic, and few shoe stores are prepared to take back a pair of dirty trail shoes.

Another thing to consider when buying trail shoes is determining what type of terrain you’ll most often be running in. The tread pattern and depth of the lugs for dirt are different than, say, for mud or alpine. I would also recommend getting a trail shoe that has some side and toe protection, as opposed to a full mesh wrap. Accidentally hoofing a rock unprotected isn’t a party. If you have wide feet like me, it’s also good to find a shoe with a relatively wide toe box, which allows yours toes to naturally splay (as opposed to being crammed together like sardines in a can).

Not so long ago, compression socks were mostly worn by those suffering from poor circulation or those standing all day who wanted to improve blood flow. Nowadays, many runners, including myself, sport compression socks, as well as shirts and shorts.

What’s the deal with that, you ask?  The industry has held out that compression gear can, among other things, reduce fatigue and muscle soreness, as well as prevent injury. The reality is there isn’t enough evidence to strongly support many of these claims, particularly on the performance side of things. 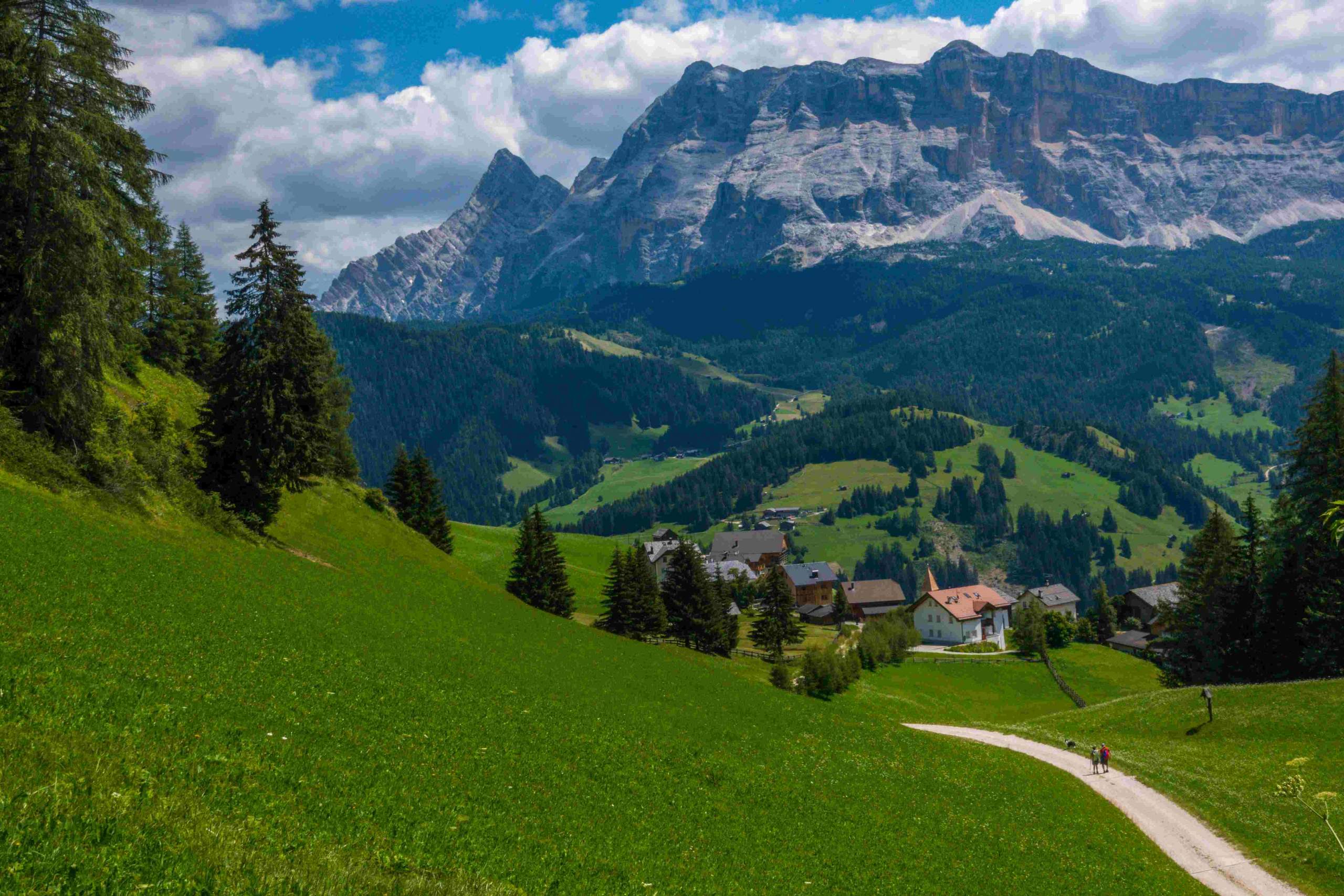 Views of the valleys of the Dolomite Mountains.

What is known is that compression socks worn after exercise have been shown to assist with recovery by lowering post-exercise blood lactate levels in the legs. (Health note: Compression gear isn’t recommended for everyone, including those with skin infections or excessive leg swelling. If in doubt, speak to a doctor.)

As far as clothing the rest of your body, there are lots of options for shorts, shirts, and overlayers — from compression garments to light-as-a-feather kit that will make you feel like you’re running naked through the woods. The key is to find gear that doesn’t chafe, bunch up, or create friction.

Of course, if you’re planning to run in the mountains or through all four seasons, then you’ll likely need to invest in a variety of garments that can deal with whatever weather gets thrown at you. It’s quite thrilling to be running in a snowstorm — but only if you’re properly outfitted.

If you’re heading into a more remote area to run, it’s best to pack accordingly, including extra warm layers, a mobile phone, a whistle, extra food and water, and an emergency blanket.

Alpine tip: In mountain environs, I tend to carry a pair of foldable trekking polls, which can help maintain balance going up and down steep slopes and can help reduce muscle effort in the legs. Apparently, the trade off is that the body requires more oxygen to power those active arms. However, one study in the European Journal of Applied Physiology found the perceived exertion was far lower with the use of poles and could delay fatigue effects (i.e. the perception of effort counts for something in endurance sports).

It’s also important to understand how various weather conditions impact your ability to retain or shed heat. Remember, the human body must maintain a temperature of between 35 and 42 degrees Celsius, which really isn’t a ton of wiggle room, given we humans live in all sorts of climates and take part in infinite hot and cold weather activities — from the 6-day, 251-kilometre Marathon des Sables in the searing Sahara Desert (Morocco), to the 690-kilometre The Montane Yukon Arctic Ultra, which takes place in the dead of winter.

Dr. Tim Noakes points out in his book The Lore of Running that when the outside temperature is higher than that of the skin, the body must sweat to cool itself down. However, as the air humidity increases, the ability to lose heat by sweating decreases. In other words, it’s easier to cool down in hot dry weather than hot humid weather. On the other end of the spectrum, in cooler weather, you will bleed precious heat much faster in wet conditions. The takeaway: dress accordingly, and, in some cases, adjust your activities and efforts based on prevailing conditions.

When I first began trail running, the standard hydration kit was a backpack with a one to two-litre water bladder and a tube to draw water from it. In more recent years, this system appears to be falling out of favour, in part, because you need to take the pack off to refill, and it’s also more difficult to gauge how much water you’re consuming and how much water is left in the bladder.

These days, a growing number of runners are choosing to hit the trails with a running pack/vest with large pockets in the shoulder straps that accept soft flasks and water bottles, which are easier to refill and monitor consumption.

Next up, the final installment of the series, which will focus on planning & running an ultra-marathon or a multi-day adventure. Until then, have fun exploring and stay safe out there.