The Lycian Way is a moderately challenging coastal walking trail, with numerous ascents and descents along its 510-kilometre route. During Turkey’s hot, dry summer season, the climate can be too extreme for rigorous hiking, with daily temperatures hitting around 34°C and higher during July and August. 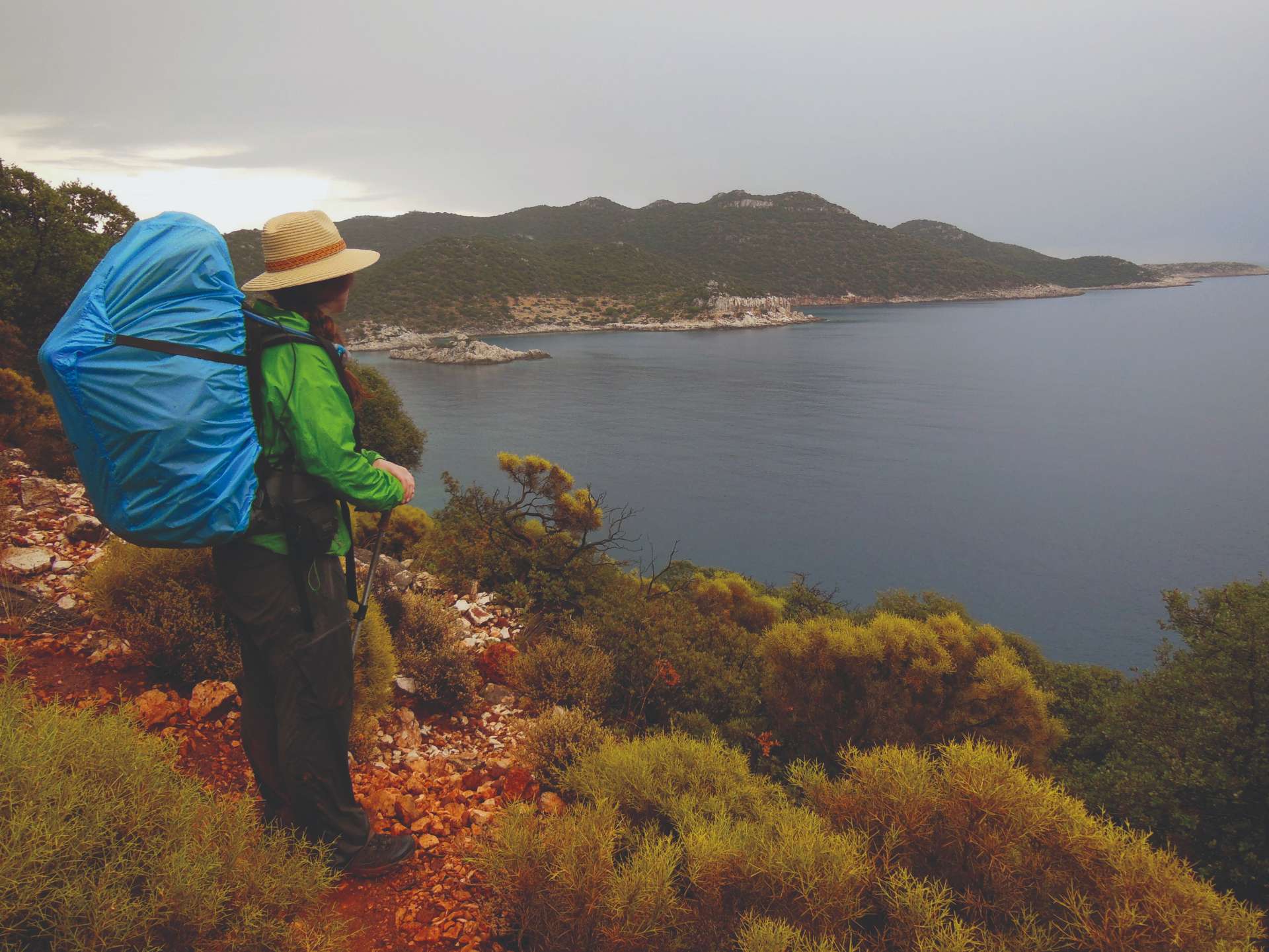 Snowfall in the winter can also make trekking more difficult, particularly at higher elevations. For the best conditions, plan your trip during the more temperate spring or autumn seasons, from March to May and September to mid-November. Note that rainstorms are common in late March and April, which can also be a hindrance to hikers, but surmountable.

The Lycian Way officially starts in Olu Deniz, a small Mediterranean resort near the southern Turkish city of Fethiye. It terminates in Hisarcandir, about 20 kilometres from Antalya. Trekkers generally travel from west to east, starting in Olu Deniz, where the hiking is the easiest, though in truth you can join the trail anywhere along route.

Fethiye and Antalya are both good jumping-off points to get to the Lycian Way, with frequent microbus service to Olu Deniz and Hisarcandir, though the latter runs only once a day. [Here’s a good Google Map that shows the entirety of the footpath.]

Operated by both large carriers and low-cost airlines, there are direct flights to the southern Turkish cities of Dalaman and Antalya from Istanbul, as well as from a number of major European cities like London and Berlin. Airports in each city serve the region, though Dalaman is somewhat closer to Fethiye. You can also take an overnight bus (about 14 hours) from Istanbul to Fethiye or Antalya. During the summer, there is a ferry service between Rhodes, Greece, and Fethiye, Turkey.

The Lycian Way is a footpath, but most trekkers only walk a portion of its 25-day route, starting their journey from different points along the trail. Buses run frequently between most Lycian Way towns, and there is express bus service between Antalya and Fethiye. On the trail itself, walking is the only way to get around; the loose and often uneven terrain is not suitable for mountain biking.

Located within the ancient geopolitical region of Lycia in southern Turkey (today the provinces of Antalya and Muğla), the Lycian Way passes through numerous small towns, tourist resorts and fascinating archaeological and cultural sights, many of which date back to the Bronze Age.

Once the capital of Lycia, the ancient city of Xanthos was built in the eighth century BC, the ruins of which feature pillar tombs and an ancient amphitheater. Just 10 kilometres south, Letoon was an important Lycian religious center, and the vestiges of three temples survive at the site today. Because of their notable beauty and remarkable heritage, Letoon and Xanthos have together been named a UNESCO World Heritage site. Nearby, the unique ruins outside Kekova are now submerged in the ocean and accessible by boat tour.

Heading west, one of the more unusual sights along the Lycian Way is Mount Chimaera—or Yanartaş, in Turkish—near the ancient city of Olympos. Here, natural gas leaks from crevices on the side of a rugged peak, creating a series of “eternal flames”—natural blazes that seem to leap magically from the rock. It is particularly impressive after sunset. A few days’ walk to the west, the ruins of ancient Phaselis are located in a national park and set against three protected coves on the Mediterranean coast; the aqueduct and theatre are two of the highlights at this site.

There are many other sights to see, of course, including the region of Kekova and Simena, Aperlai, Apollonia, Sidyma and Pinara, to name a few.

One of the chief attractions of hiking the Lycian Way is the variety of activities and destinations available to trekkers along the trail. In addition to touring ruins, travellers can swim and sunbathe on the many gorgeous beaches along Turkey’s famed “Turquoise Coast.”

In larger Mediterranean resorts like Cirali, Kas and Kalkan, summer sports are popular, including paragliding, boating and kayaking. There is also a reputable dive school in Kalkan, and more than 50 dive sites off the coast of Kas. Visiting smaller towns along the trail (some of which are only accessible on foot) is also highly rewarding, offering the opportunity to experience rural life in Turkey on a firsthand basis.

For outdoor enthusiasts, the Lycian Way offers a number of appealing options beyond trekking. It’s a challenging but worthwhile climb to the top of Tahtali Dagu, also known as Mount Olympos, a 2,366-metre peak accessible from the trail.

Not far from Olu Deniz, on the western stretch of the Lycian Way, the Butterfly Valley is a limestone gorge with beautiful views, waterfalls and a protected beach, which requires a rather harrowing descent to access from the trail.

The linked Google map doesn’t cover the whole route, seems to be just the western part.