Dig into the Adventure that is Eating an Insect

One of our first missions in Bangkok was to sample as much street food as we could. We skipped any sort of formal, guided tour, instead opting to follow our noses … for better or for worse.

The more mysterious and less identifiable the food, the better. We gobbled down everything from thick, pasty, weighty pancakes lined with peanuts and sesame, to spicy squid on a stick, to gooey, stinky durian fruit.

Perhaps I should have perceived Sue’s eagerness to try anything and everything as foreshadowing. Fast-forward to later that night, just after Sue remarked that the scorpion tasted like hay, just before she almost passed out on the Khao San. While I did tell Sue I’d hold her dreads back if I had to should she succumb to food poisoning at any point in our trip, I didn’t realize I might actually have to.

While alike in many ways, Sue and I have very different perceptions of the word “adventurous”—and, apparently, an inflated sense of each other’s’ versions of “daring.” I see our respective interpretations of exploration as a case of tomato, tohmato. Sue thinks I’m insane for my proclivity to choose sweaty hikes over a boozy brunch, while Sue’s undertaken her own set of adventures that I would be, to put it softly, “reluctant” to try.

Example 1: Sue participated in an ayahuasca ceremony. Call me square, because I am, but psychedelics scare the heck out of me. And yet, there’s Sue, exploring all the crevasses of her mind, skipping down the slopes of consciousness I’d never dare after drinking and subsequently purging a mystical, earthy magic potion.

Example 2: Sue has words carved into her skin. I certainly have dabbled in the physical and psychological pain that comes along with intense training: hauling 50+ pounds on my back for hours at a time up a mountain trail ain’t no piece of cake. But the mere thought of enduring scarification, as Sue has, makes me lightheaded. For heaven’s sake, even the way she described getting her dreads tightened made me nauseous. 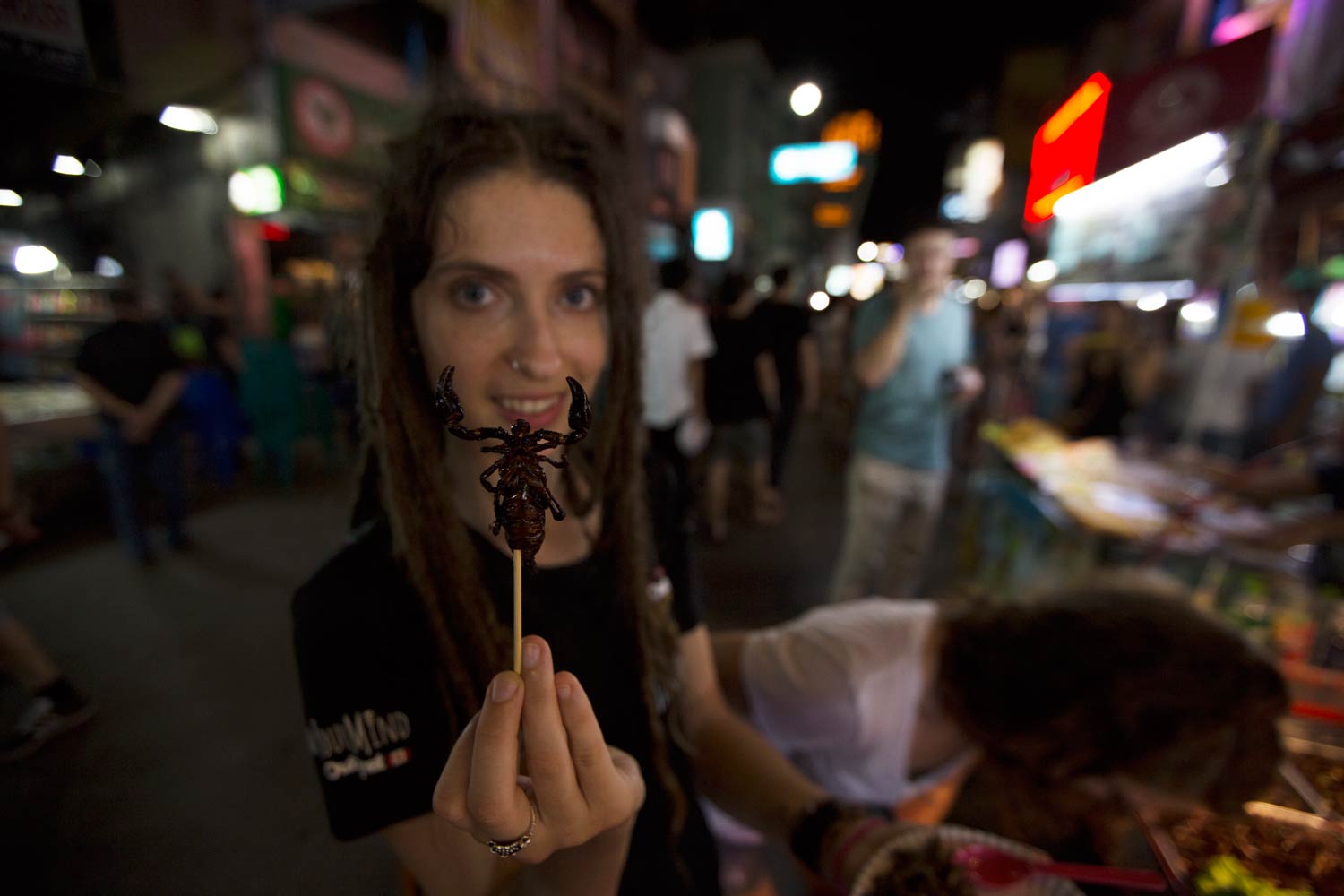 Example 3: Here in Thailand, Sue has proven she will eat anything, scorpions included. There we were, having our throwback on Khao San Road, when Sue had just gotten her Thai tattoo, and we’d decided to take a nostalgic stroll down the strip. We passed all the familiar sights that made me feel like I’d gone back in time: “Lads on tour” drinking beer towers on picnic tables, cooing frogs ‘round every stall.

But then we passed the dreaded dried-bug vendor. This was an activity I’d happily forgone on trips previous, but Sue just had her foot sliced about 1,000 times by a bamboo spear dripped in ink, so she had a bit of an adrenaline high. She didn’t hesitate, immediately picking her crawly choice—which, in my dramatic mind, was the size of her face. Foregoing the scorpion, I chose to try a plate of crickets that one expat described as “just like corn nuts.”

I reluctantly popped one of the winged buggers into my trap and found the expat was right: they tasted exactly like corn nuts. And looking at the whole plate of crunchy arthropods, I confirmed silently that one was enough for me. 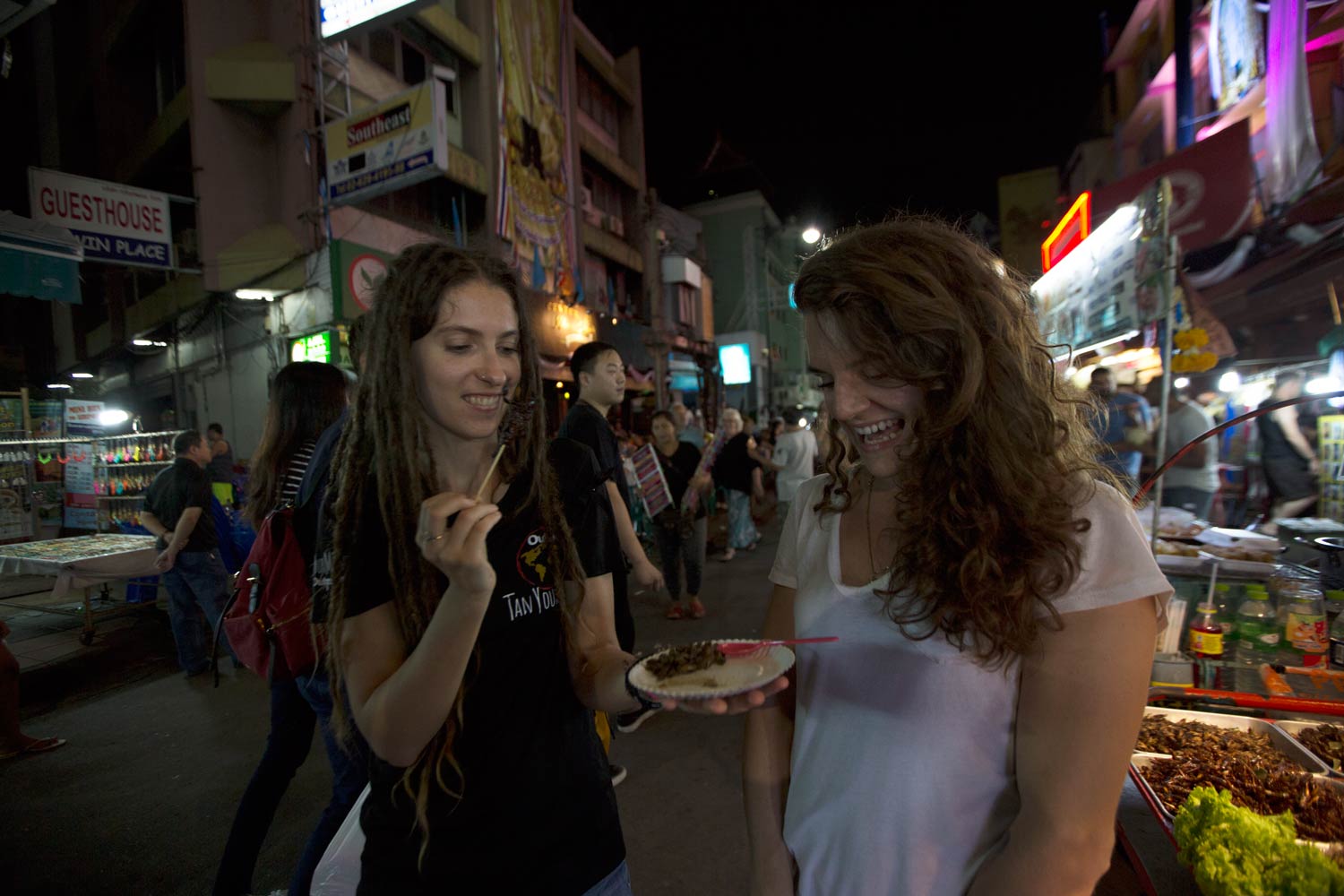 Sue, on the other hand, dusted the dirt off her shoulder with one hand, and yielded her scorpion sword in the other. Preparing for her mic drop, she shoved the scorpion in her mouth claw-first with a quick guillotine-like drop of her teeth. Chewing as if her mouth was full of too-hot tom yum soup, I seem to remember her rationalizing the experience to herself. “Tastes like hay. It’s not too bad. It’s okay. I’m okay.” Until, perhaps, the thought of scorpion brains oozing between her teeth got too much. Mid-sentence, she tipped forward like a drinking bird toy, before returning to an erect position and dipping forward again.

About 20 minutes after we finally left the backpackers’ city, she said to us, “I don’t feel well.” I patted her back, not regretting my choice to forego the scorpion, but somehow wishing that I too indulged in a bamboo tattoo. While our perceptions of adventure may differ, somehow, together as travel buddies, it works.

This Week in Travel News: A Golden Age of Loyalty Rewards as Air Canada Ditches Aeroplan