Known as the capital of Peru’s Amazon, Iquitos is a funky little city well worth exploring on your way to a jungle adventure.

Iquitos is a special kind of hot. It’s a smothering, deodorant-defying heat that makes you feel like a bear in a sauna. Wearing a down jacket. Visiting in the winter won’t help either, because there isn’t one. It’s close to the equator and in the heart of the Amazon, so the temperature is around 31°C with 98 percent humidity — 365 days a year.

And while Iquitos may not be every traveller’s cup of very hot tea, the “capital of the Peruvian Amazon” is a funky, sweaty city well worth exploring on your way to a jungle adventure. Getting there isn’t as hard as finding the lost cities of jungle lore, but it’s not as easy as hopping on a bus either.

There are only two ways in and out — boat or plane. With a population of a half million, Iquitos is the world’s largest city not accessible by road, mostly because, well, where would you be driving from? Look at a map. You’re surrounded by jungle for hundreds of miles. 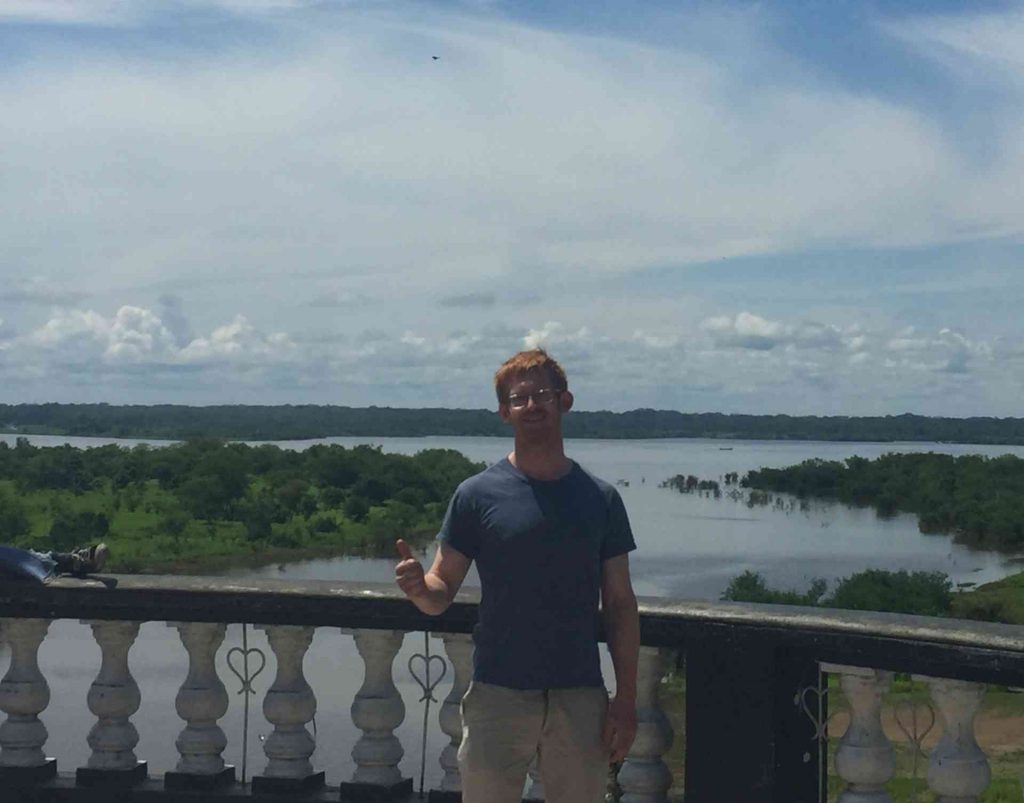 The author in Iquitos, with the breadth of the Amazon Basin behind. (Colin Quinn)

But then again, why would you need a highway when you have the world’s most powerful waterway at your disposal? Almost everything in Iquitos comes from the Amazon River — the economy, culture, cuisine, and of course, the history, which is intertwined with the singular ecosystem the river affords. 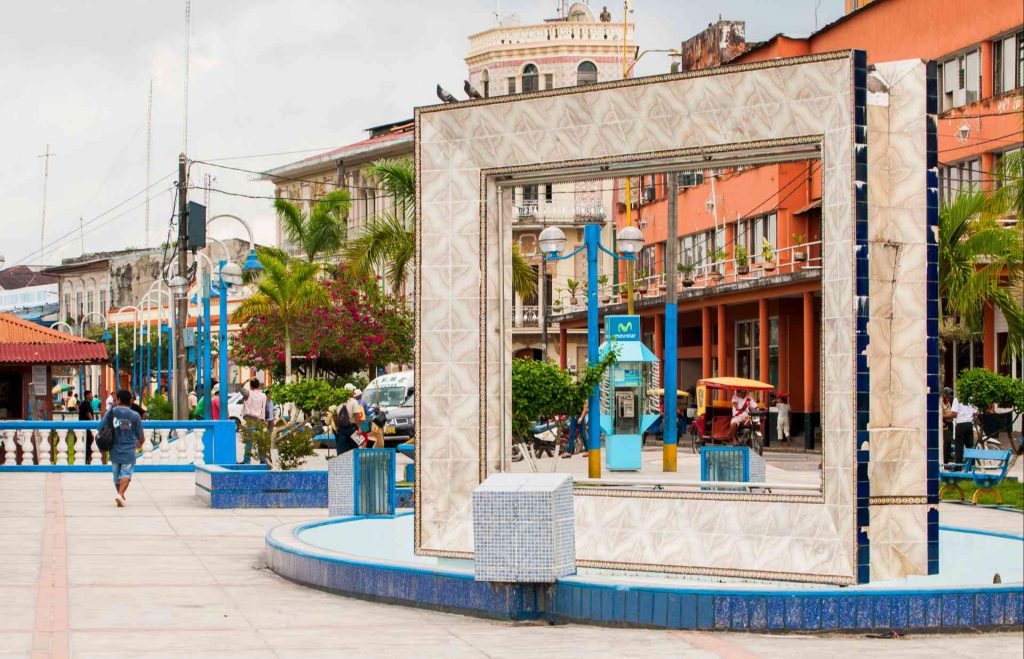 While we were en route to a jungle survival trek downriver, my guide explained the history of Iquitos in three colours: white, red and black. The “white” represented rubber — the discovery of which transformed Iquitos from a small Jesuit mission into a wealthy city in the 1870s. Of course, the people who harvested the rubber didn’t get rich. Historically, those who do the real work never do. The boom ended when rubber-tree seeds were smuggled out of the Amazon, but the boom town held on.

Mahogany — or “red” — became the region’s chief export, until oil (“black”) was discovered in the 1960s, which helped modernize this jungle island. Today, tourists use the city as a convenient gateway to the wonders of the Amazon — which are never far away. Left untended, the rainforest would soon swallow the city whole.

I stayed near the Plaza de Armas, a large central square dotted with palm trees, sculptures and benches, surrounded by colourful buildings and a sizable church. Here you’ll find most of the hotels, restaurants and nightlife popular with tourists, as well as ATMs, pharmacies, a casino or two, and plenty of licensed (and unlicensed) tour operators. 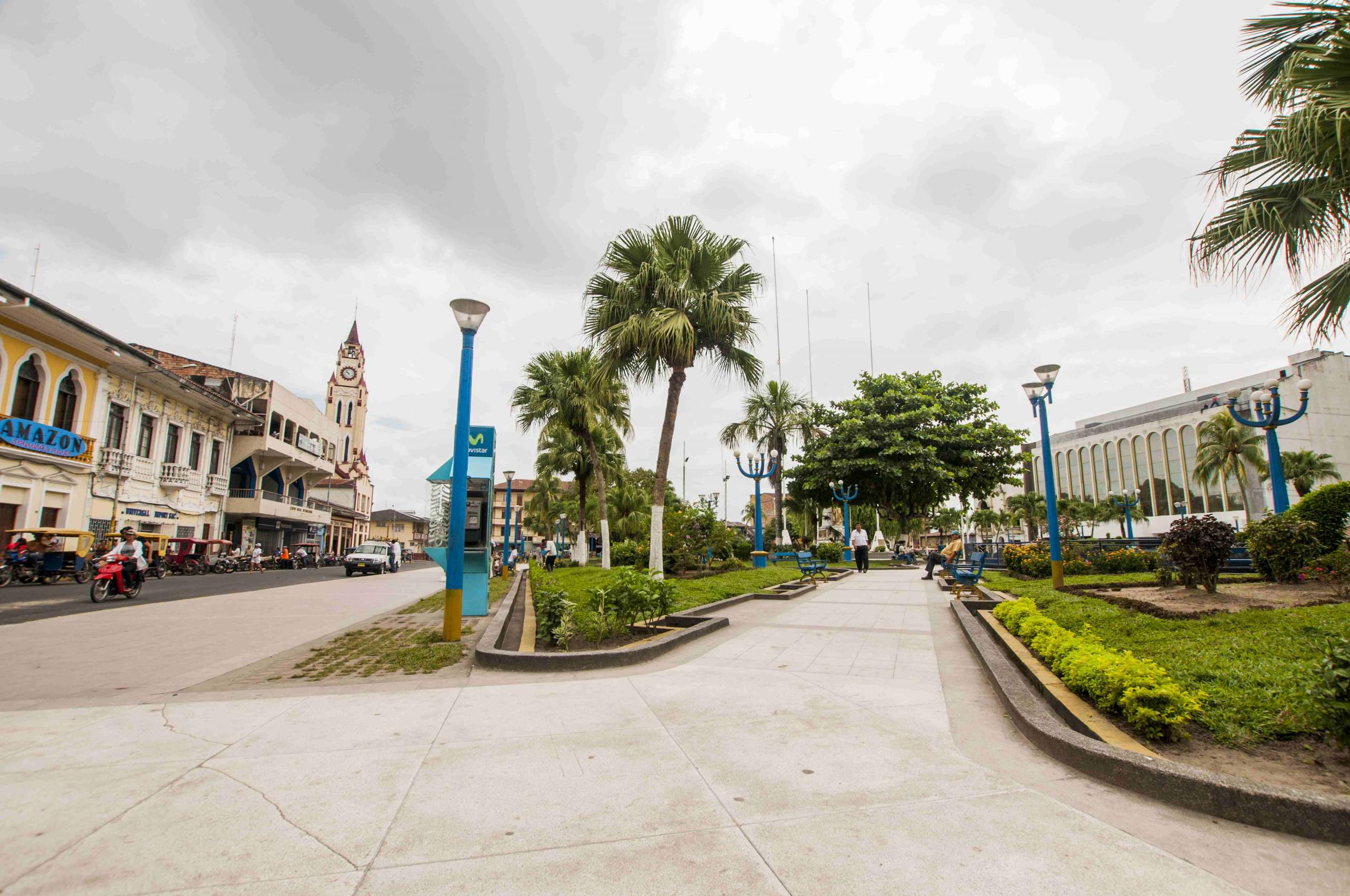 Iquitos is a lively, culturally-rich city and community worth exploring. (Alvaro Garcia/PromPeru) 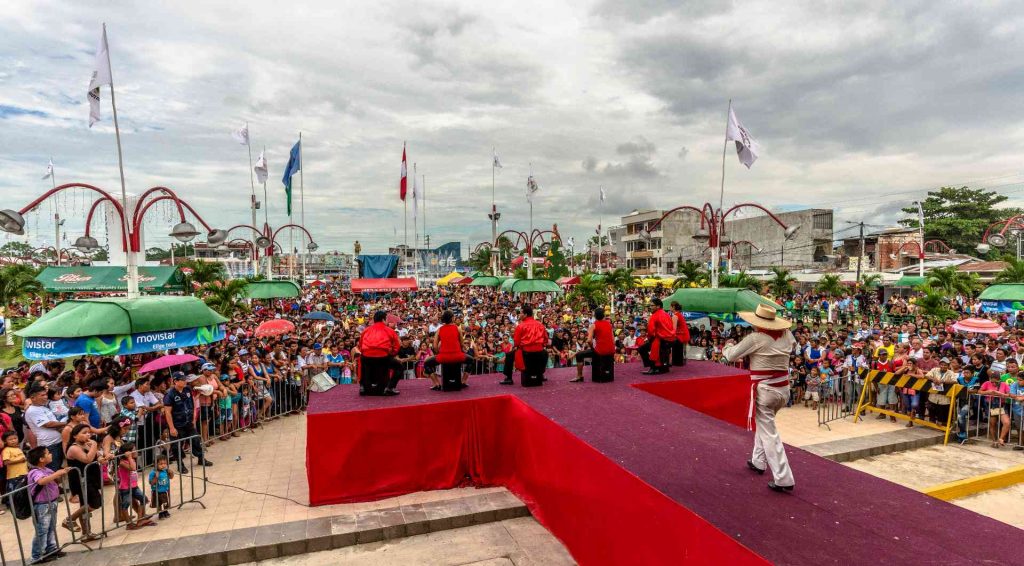 The licensed operators have storefronts which advertise a variety of Amazonian trips — hikes, lodges, fishing excursions and cruises to spot the popular pink freshwater dolphins. The unlicensed guides approach you on the street and offer to take you to popular tourist spots, such as the floating market of Belen. These guys can be persistent (and more than a few offered me drugs). And hey, I get it, everyone’s got a hustle, but their constant sales pitches made it tough to slow down and take in the sights. 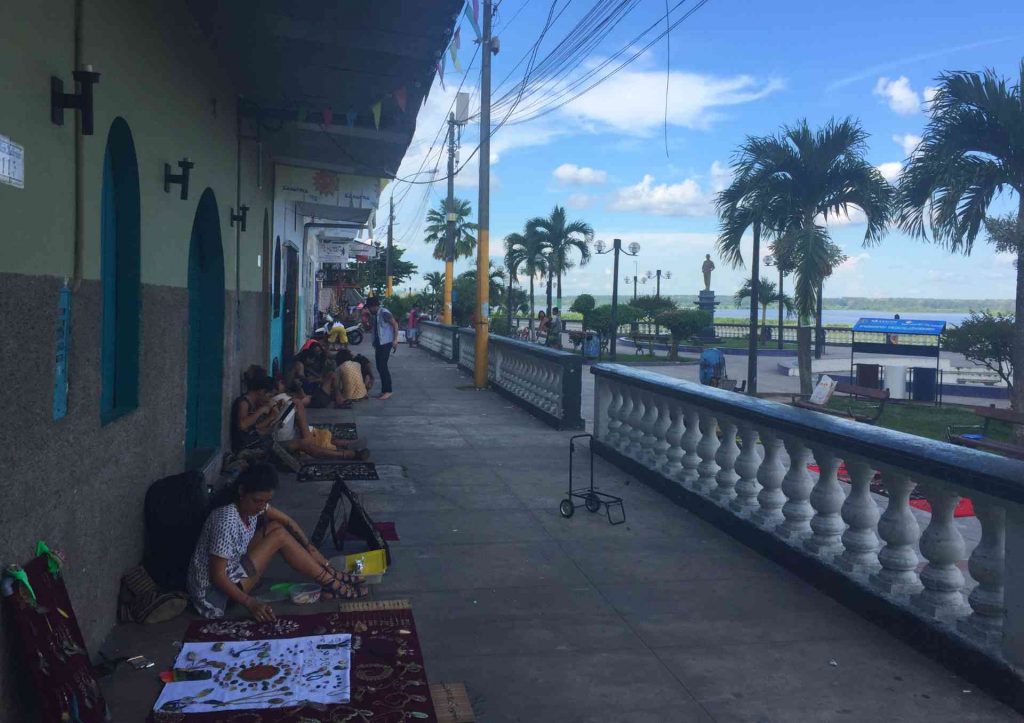 Iquitos is the gateway for a Peruvian Amazon adventure. (Colin Quinn)

Speaking of which, just a couple of blocks east of the central plaza is the Boulevard Joaquin Abensur, a bright promenade offering dramatic vistas of the Itaya River, an Amazon tributary. There are a few cafes as well, where you can sip a latte (drinking hot coffee in this heat is next-level coffee dedication) or a fruit shake. I typically ordered whichever fruits I didn’t recognize, which was pretty much all of them. At night, the boulevard rocks with music, dancing and vaudevillian performers.

One of Iquitos’s most famous sites is the floating market of Belen, a short moto-taxi ride from the Plaza de Armas. Some of the shops are on solid ground, but the term “floating” very much applies. It’s literally on the river and exudes a serious Mad Max vibe — the wares for sale very much reflect the diversity of the jungle itself. 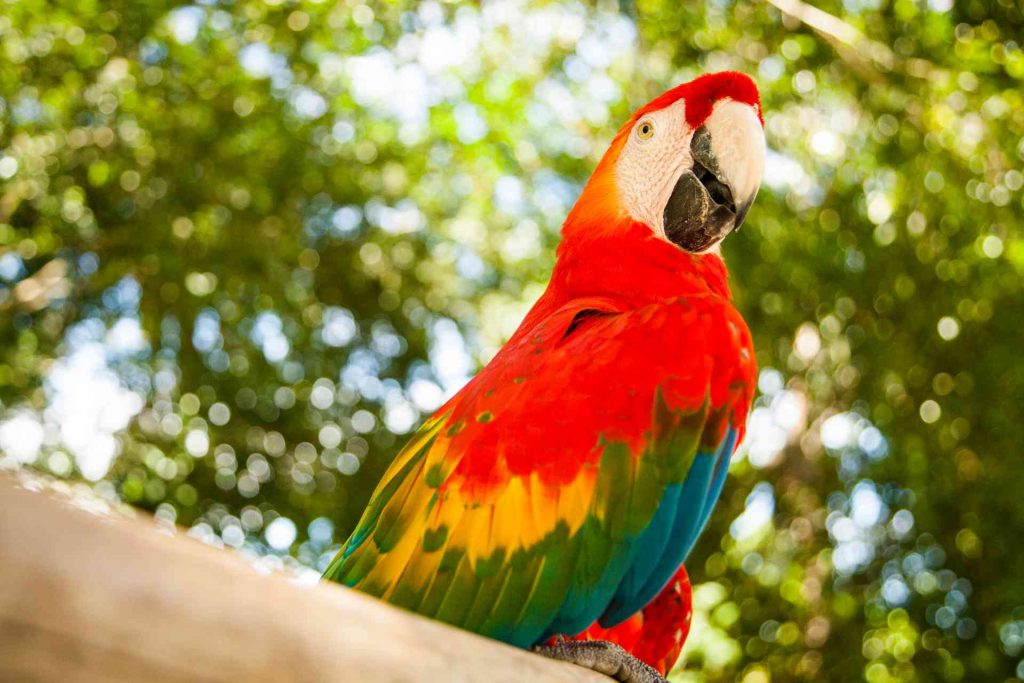 The Amazon of Iquitos full of wildlife. (Alfonso Zavala/PromPeru)

If you’re looking for grains, tools, bones, elixirs, backpacks, camu camu fruit, 400-pound fish or a magic amulet, this is your place. Keep in mind, not everywhere in the market is tourist friendly; you might want to hire a guide. I also checked out the Indigenous Culture Museum Amazonicas, just off the main riverside boulevard.

It tells the history of the region’s Indigenous peoples, and houses an impressive array of tools, headgear and weapons. It’s no secret many of these groups have been attacked, enslaved and persecuted throughout history, and the museum doesn’t gloss over these realities. It’s well worth a visit.

For dinner, a few places offer the typical tourist-facing food—pizza and other comforts of home. But what’s the point? One of the better-known restaurants is called “Al Frio y Al Fuego” (The Cold and the Fire), which sits on a floating platform in the middle of the Itaya. To get there, you take a short ride on one of the restaurant’s motorized taxi boats — imagine a luxury canoe helmed by a man with a shotgun. 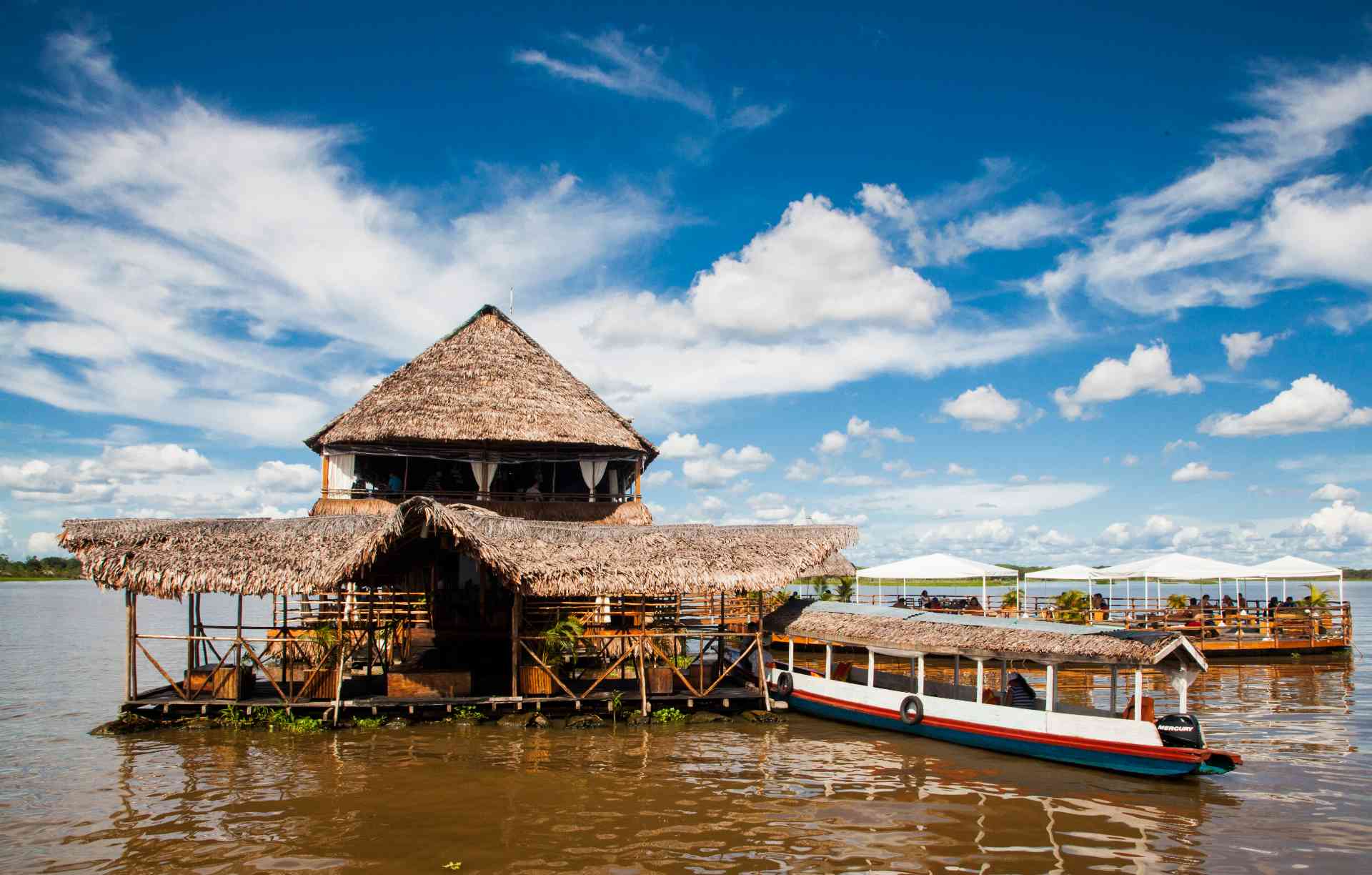 Al Frio y Al Fuego is a two-story floating cabana, built around a central swimming pool. Basically it’s an Amazon party barge, and yes, you are lounging in a pool in the Amazon River. On the canoe taxi ride, I met a group of university students and their professor, who were visiting for an academic conference. They let me join them for dinner and charades, and trust me, you haven’t lived until you’ve played charades in another language. The food was expensive, but really you’re paying to hang out in a pool in the Amazon. Worth it. 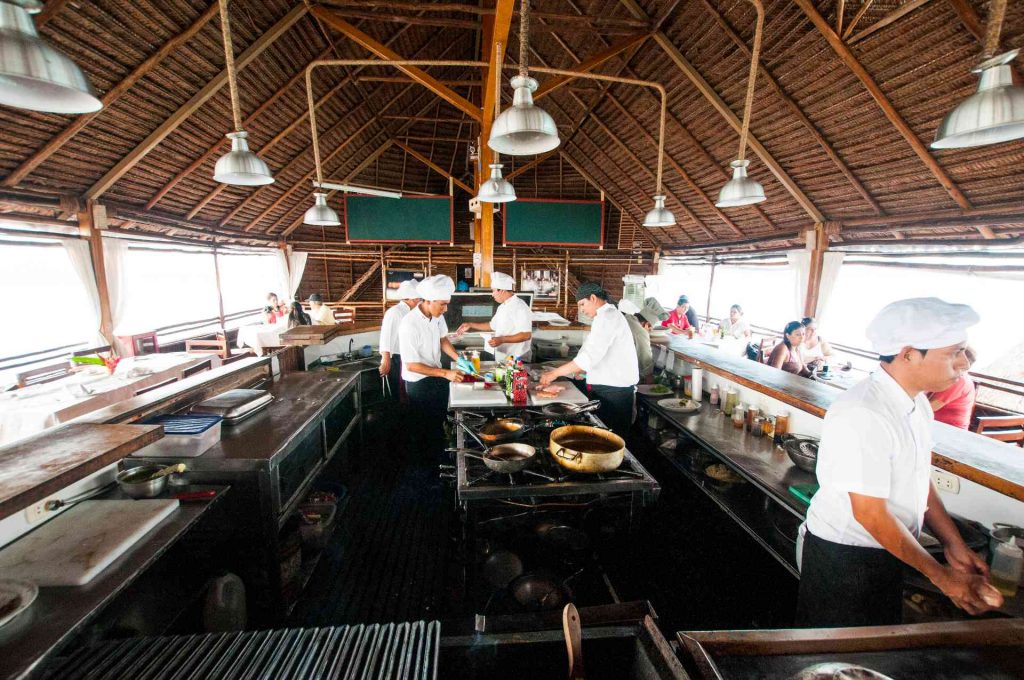 Of course, the main draw of Iquitos will always be the Amazon that surrounds it. The spectacular mysteries of its tangled, stinging marrow will always seduce a very specific kind of traveller. Though the sad reality is that’s under attack from all sides. But by spending time and money in the region, with responsible tour operators, you can help preserve our planet’s most exquisite natural resource. And if you do, I’d highly recommend staying a couple of days in Iquitos. There’s plenty for you to soak in — quite literally.**

The Tea Sessions with Jeff Fuchs | Mei’s Alchemy: The Teashop Around the Corner