From Wildlife to Wilderness to Whitewater, India Entices with Every Possible Thrill

From the High Himalayas to its lush tropical shores, India is so diverse it had to be called a subcontinent — and that’s just one of the reasons it offers every possible thrill.

By Simon Vaughan and Sarah Stone, with files from Outpost staff

Whether on snow-capped mountains or whitewater rivers, in jungles or deserts, soaring above it or exploring beneath it, India offers incredible adventure options and landscapes to satisfy any level of adrenaline junkie. Here are some of India’s adventure highlights:

You’re forgiven if Africa first comes to mind when you think of lion, leopard, rhino and elephant—but India is safari central, and can give any destination a run for its money. The Indian peninsula is one of the most bio-diverse regions on Earth, with more than 350 species of mammals, 1,200 species of birds, and more than 45,000 varieties of flora.

Pressed in by a steadily growing population and well organized poachers, the Indian government is committed to not only protecting its threatened wildlife but actively ensuring it survives. 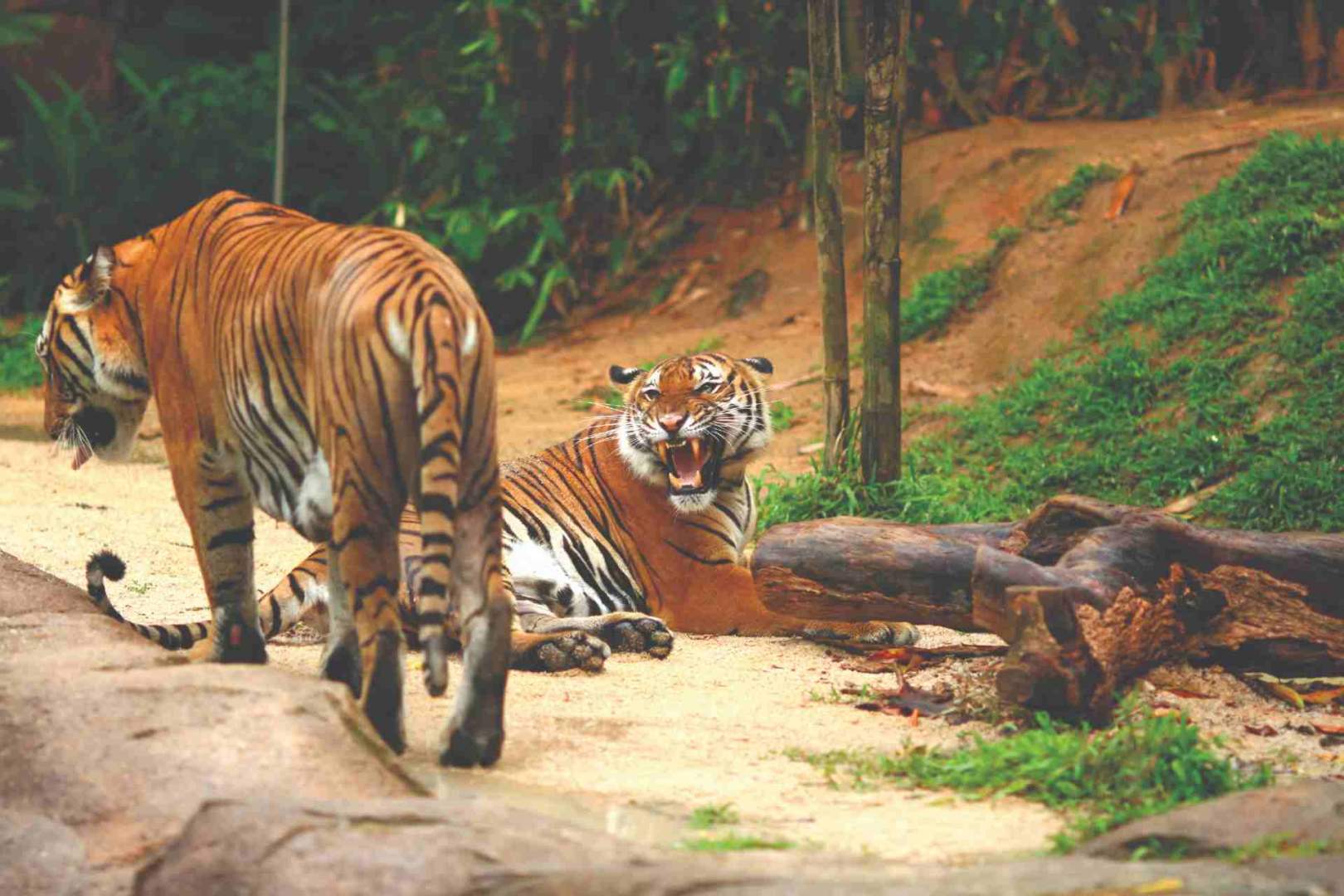 India has 441 wildlife sanctuaries as well as 80 national parks. Of these, about 48 are tiger reserves, in large part due to Project Tiger, the government’s program to repopulate the species. Once numbering over 40,000, India’s famed Bengal tiger population now runs in just the few thousands—though that number is actually on the increase every year due to conservation efforts. The government does a tiger census every four years—with the most current due this year.

Tiger safaris/tours are typically undertaken via four-wheel drive (elephant riding by travellers is now highly discouraged by the tourism industry). Where safe and permitted, rangers and qualified guides lead walking safaris, which allow low-impact experiences, and the opportunity to get up-close and personal with the abundant birdlife and flora. While there’s never a guarantee of seeing the biggest and some say most magnificent of cats, anyone who does spy one is assured the memory of a lifetime!

Tigers aside, India is also home to 80 percent of the world’s one-horned rhinos, half of the Asian elephants, most of the Indian leopards, and is the only place to find the majestic Asiatic lion.

All of the parks and reserves offer accommodation within their boundaries, or just outside them, and cater to travellers of all budgets—from hostels and campsites to the opulent former hunting lodges of the Rajahs. Not all reserves are created equal, so before travelling do your research.

Decide what style of travel and accommodation you want, as well as what you most want to see. If it’s something elusive, like the tiger, rhino or lion, budget for qualified guides and enough time for the greatest number of game drives or walks possible, to better maximize your chance of success.

The Spectacular Desert Sands of India

India’s desert region spreads over the four states of Punjab, Haryana, Rajasthan and Gujarat. This vast region is generally split into two sections—the Great Desert (also known as the Thar Desert) and the Little Desert (known as Rann of Kutch)—between which lies an uninhabitable wilderness.

Though the desert can be explored on foot or by vehicle, one of the most unforgettable experiences is via camel safari. An excursion that lasts several days can include travel by camel train, the carrying of camping and cooking equipment, and being accompanied by knowledgeable local guides. By day, you can explore villages and outstanding landscapes, before sitting around a blazing campfire, gazing at stars overhead, all while being titillated by the Rajasthani aromas coming from the pots and pans.

The Pushkar Camel Fair is an annual five-day event that attracts thousands of camel breeders and buyers, local merchants, entertainers, travellers from around the world—and includes 50,000 camels! (See our story on it here). A pre-dawn balloon flight over the encampments will make you feel you’ve slipped back in time, as clusters of breeders and their camels are silhouetted against the glow of their fires, fending off the chill of night, and preparing for market in timeless fashion.

If you’re thinking of visiting the fair, make sure you book well ahead—the limited accommodation and facilities sell out months in advance, and you may find yourself enduring a long and dusty daily commute from a neighbouring town. While in Rajasthan, be sure to hit the cities of Jaisalmer, Bikaner and Jodhpur, resplendent with their white palaces, ancient architecture, pillared temples and formidable forts.

For the intrepid whitewater rafter, few places are more exciting than India. As if the blood-rushing adrenaline of running some of the finest unspoiled whitewater wasn’t enough, it’s all against the backdrop of some of the most spectacular scenery and mountain ranges in the world! During down-time between rapids, rafters can chill as the beauty of remote rural India drifts by, untarnished by mass commercialization.

There are multiple classes of river in India to suit every skill level—from just a good day out to churning Class V trailblazing. No matter what time of year you travel, with so many rivers, there’s always whitewater you can tackle somewhere in India. Here are three rafting options to get you started:

Rishikesh, Uttarakhand: Feel the power of the Ganges River! Rishikesh has rapids ranging from Classes 1 to 5. The best time to raft is September to November, and March to late April.

Ladakh, Jammu & Kashmir (northern India): There are fantastic guided rides on the Indus and Zanskar rivers, between Spituk and Saspol. The river becomes rough past Saspol, so ensure you’re experienced and accompanied by a skilled guide.

Dandeli, Karnataka: If further south, Dandeli offers some solid rafting opportunities. Although tamer than the previous options, it still provides a fast thrill.

It’s not surprising the country that’s home to the third-highest peak in the world, Kanchenjunga, also offers great rock climbing. Thankfully, most of it is more down to earth than the average 8,000-metre peak! Rock climbing debuted in India in the south in the 1960s, on the granite hills and outcrops of Ramanagaram, near Bangalore. And the region remains the capital of the sport in India today. Within a 60-kilometre radius of the city centre rise some of the best climbing rocks in the country, including the red sandstone cliffs of Badami and its more than 150 bolted climbs.

Not only does Hampi offer some of India’s best rock climbing, but if bouldering is more your cup of chai, you likely already know it boasts some of that sport’s best “problems” (the term for the route of a climb) in the world. For a more remote and unique setting try northern Himalayan India, in the Zanskar area of Ladakh, where your only company will likely be local shepherds.

With sites dotted throughout the country, the best time for rock climbing and bouldering varies from region to region. The Himalayas’ peak season is April to June, while in Delhi—your base for the Aravalli hills—it’s best to avoid the monsoons (July to September). Near tropical Bangalore, it’s possible to climb year-round.

For a different view of India, how about paragliding? Each year, Vagamon on India’s southwestern coast, hosts the International Paragliding festival. Known as the Scotland of Asia for its rolling green hills, Vagamon’s skies come to life as multi-coloured canopies wheel and soar in the cool Kerala air.

Attracting participants from across India and around the world, Vagamon is fast becoming an international centre both for its festival and its paragliding schools.

Kamshet, in the state of Maharashtra, hosted the Paragliding Association of India’s first festival in 2011—and followed that with another a few years later. They’ve helped turn Kamshet into a paragliding hotspot, with training programs and instructors readily available, and travellers flocking to the area just to paraglide. Other hotspots include Bir in Himachal Pradesh and Intkali in the Pabbar Valley.

To Ski or Heli-Ski?

Where there’s snow there’s skiing, and India’s mountain ranges are no exception. For years regarded as an exotic destination for only the most intrepid of ski enthusiasts, India’s slopes are gaining fans, and the country is fast becoming the place for anyone seeking the cutting edge of powder.

What the Himalayan lodges of Kashmir and Jammu may lack in luxury, they more than make up for in excitement, with kilometres of virgin snow and an absence of long queues. In Uttarakhand, the resort of Auli offers a three-kilometre-long slope. Dayara Bugyal has a ski-lift and more than 28 kilometres of slopes, all in excess of 3,000 metres above sea level.

If heli-skiing is more your thing, operations have opened in Manali, and at the nearby peaks of Hanuman Tibba, Deo Tibba, Chandrakhani Pass, and Rohtang Pass. ♦