Air Transat has stopped offering gluten-intolerant, halal and other special meals on their transatlantic flights. Here’s how the trend began in the first place, and where airlines might go from here.

Montreal-based airline Air Transat was recently in the news after announcing that their transatlantic flights would no longer have options for travellers with certain special dietary or religious requirements, including anyone gluten-intolerant or seeking halal meals.

As a consolation, the airline suggested that anyone seeking something no longer available in economy class could either buy a (considerably more expensive) seat in the airline’s more gastronomically pampered Club Class—or just bring their own food.

Needless to say, the announcement—and the suggestions—didn’t go down well with some of their customers and other travellers. 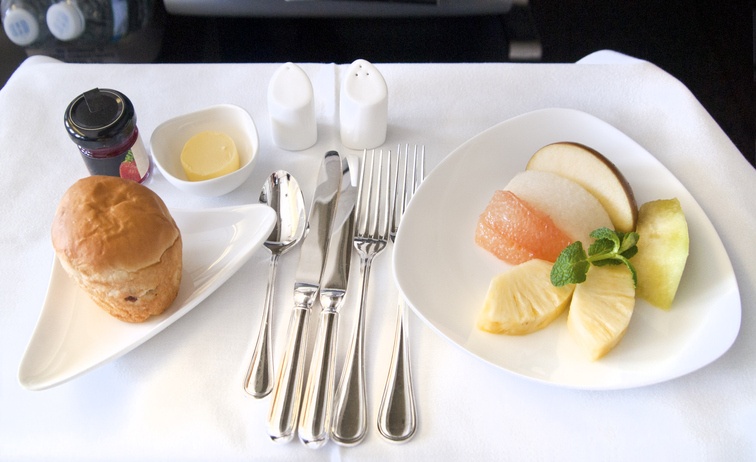 A Brief History of Airline Food: Once the Best, Then the Worst

Airline food has long been the butt of many a joke. Years ago, one British sitcom had a skit in which the supposed survivors of a plane crash ashamedly admitted to having eaten the airline food while awaiting rescue—only because, they stressed to their appalled interviewer, they’d already eaten all their fellow passengers.

But really tho, what’s the deal with airline food?

A: What’s the deal with Airline Food?

B: Idk, he’s been testy ever since we started calling him that.

In the early days of airline travel, when flyers were expected to dress as if heading out for an evening at the theatre, in-flight meals were often given full white-glove service; produce was fresh and tasty, and the booze flowed freely and free of charge. As fuel and general operating costs increased over time, airline meals suffered greatly and soon developed a reputation akin to hospital food, school dinners or prison chow.

The change in menu was just one of many cost-cutting measures introduced at a time when the airline industry struggled to remain solvent amid a sea of bankruptcies and mergers. Other changes included the elimination of blankets and pillows, fees for checked-baggage and the end of free headsets.

The cutbacks and changes were greeted differently by different travellers.

Some were happy to have little more than a seat if it meant saving a few dollars on their next trip, while others suggested they’d happily pay more for more services. In an effort to make everyone happy and still make ends meet, many airlines began offering multiple classes of service on the same aircraft such as first class, business, premium economy and economy.

The more you pay, the more you get, from restaurant-quality food and premium liquor at the front, to the ubiquitous foil-wrapped mystery snack at the back—if you’re lucky.

In the grand scheme of things, Air Transat’s transatlantic menu change isn’t earth-shattering. They’ve added a new range of food, including a complimentary choice of hot sandwiches ranging from pulled beef or ham and brie, to smoked meat or grilled vegetables, to a chicken wrap or a vegetable maki.

No, instead the airline’s problem came once they announced they were eliminating or drastically reducing most special meals.

@airtransat Read about ur dropping gluten free meal options on transatlantic flights. Not only have u no doubt lost my daughter’s business,,

#Air Transat. Hey I can make a crappy gluten free sandwich on board that will be better than the first class sandwich. Do I get a discount?

Many airlines have a long list of such meals available. There’s generally no additional fee for special meals, but they must be ordered in advance. Air Canada’s website lists no fewer than 17 variations, including Hindu, kosher, halal, diabetic, lactose-free, low salt, low fat, gluten intolerant and even one called “bland meal.”

Air Transat’s decision means many travellers seeking special meals will now either have to do without food, upgrade to a higher class, take their business elsewhere or bring their own sustenance.

Unfortunately, the last option isn’t a particularly great one either, as any food brought on board must comply with airport security rules and by necessity not need refrigeration or reheating.

While this new policy may apply to Air Transat for now, history has proven that any cost-cutting measure taken by one airline is soon often followed by others, so travellers shouldn’t be surprised if other lower-cost airlines take a similar path.

And while Air Transat’s food options may be inconvenient for those in need of special meals, the airline is still offering more than one of its main rivals, WestJet. This past summer, the Calgary-based carrier inaugurated a low-cost run from Vancouver to London, England.

While food is available on the nine-and-a-half-hour flight, it is not free and the airline recommends that customers pre-purchase their $8.99 beef Dijonnaise, shepherd’s pie or butternut squash ravioli at least 48 hours beforehand.

How to Feed Your Adventure—Literally