In Andalusia, in southern Spain, from Granada to Seville to Cordoba, time just seems to stand still.

Not even a cloud in sight in any direction. A dazzling light wraps up everything. It’s 3 pm and there it is 35° C. It could be worse. I am in Granada, south Spain, with my friend Lorenzo.

We wait for the midday heat to pass before venturing to the city center. The paved streets and squares are lined with fine buildings, bars, restaurants and shops that grow more and more lively as the sun goes down. 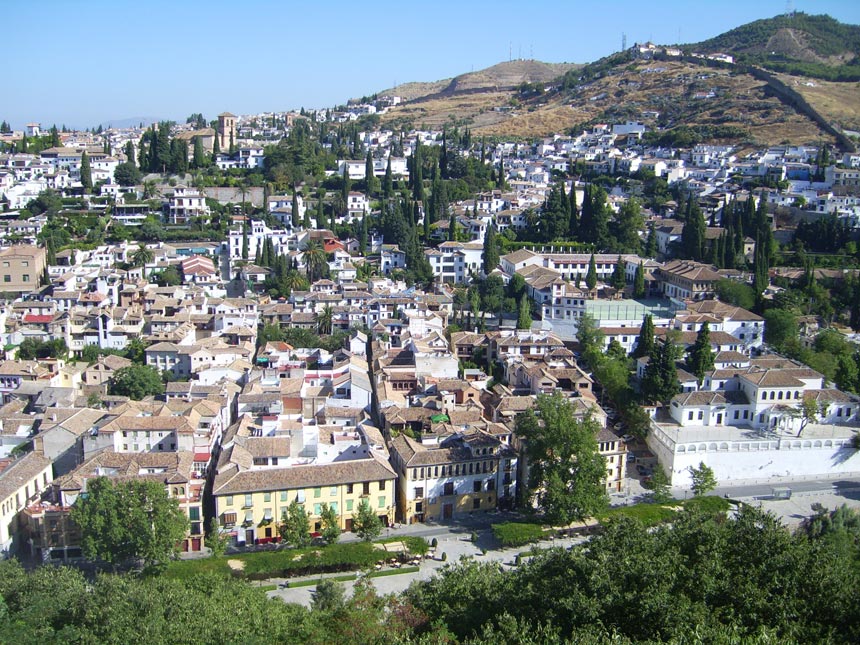 Looking down upon Granada, Spain. 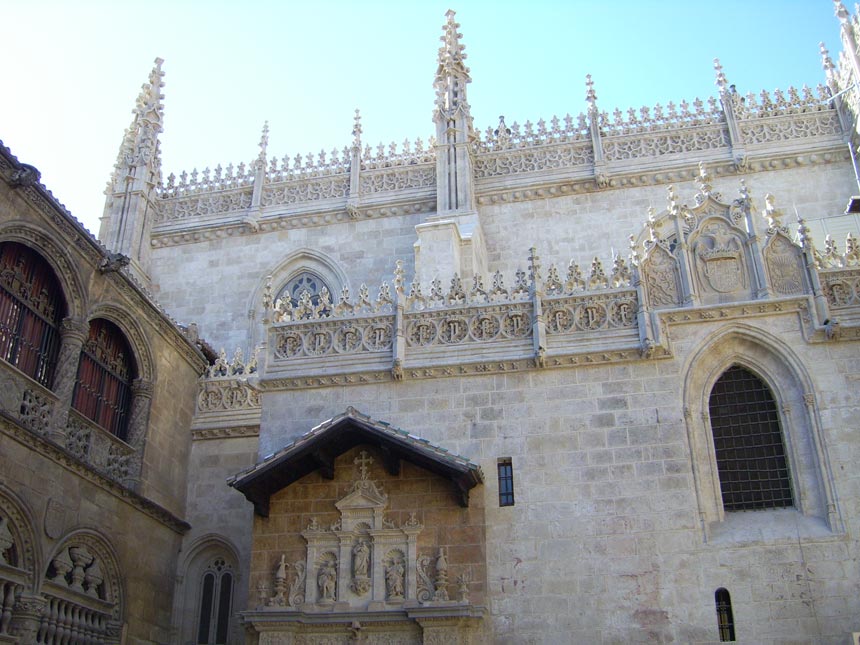 Given its huge size, it’s impossible to miss the majestic cathedral and the adjacent Capilla Real, burial place of Ferdinando II and Isabel I, the Catholic monarchs who took Granada from the Moors in 1492. The history of the Iberian Peninsula has been profoundly marked by Islamic rule, which, in the case of Granada, lasted seven centuries. Moorish elements can be traced in every cultural aspect: language, music, traditions, food, and of course, arts.

Architectural marvels like the Alhambra—a medieval complex beautifully located on a hilltop overlooking the city—testify to the grandeur achieved by the Moors of Al-Andalus.

It takes us more than five hours to visit it all. Its immense area comprises massive fortifications, lush gardens and courts with fountains and pools, lavish Moorish and Renaissance palaces and rooms embellished with the most elaborate decorations. 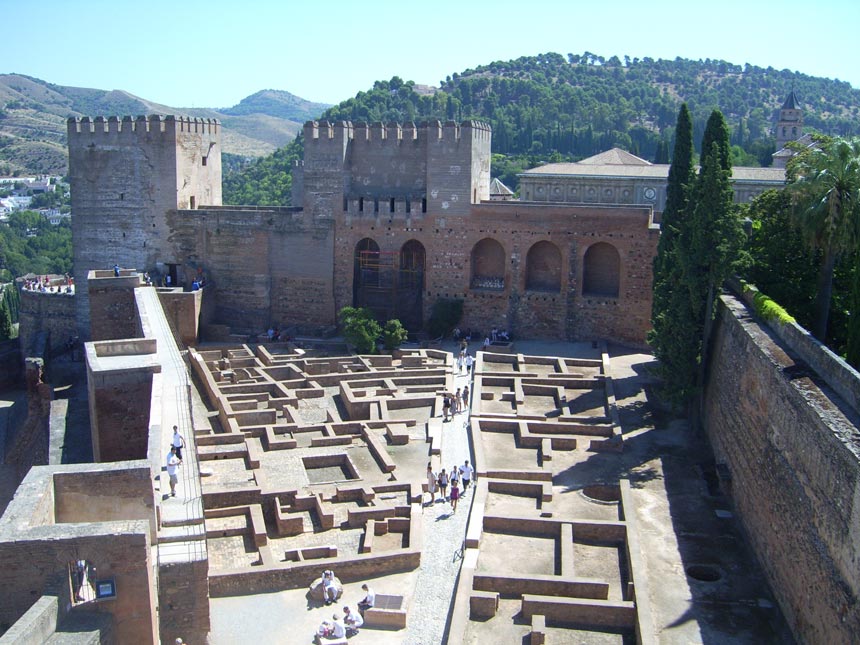 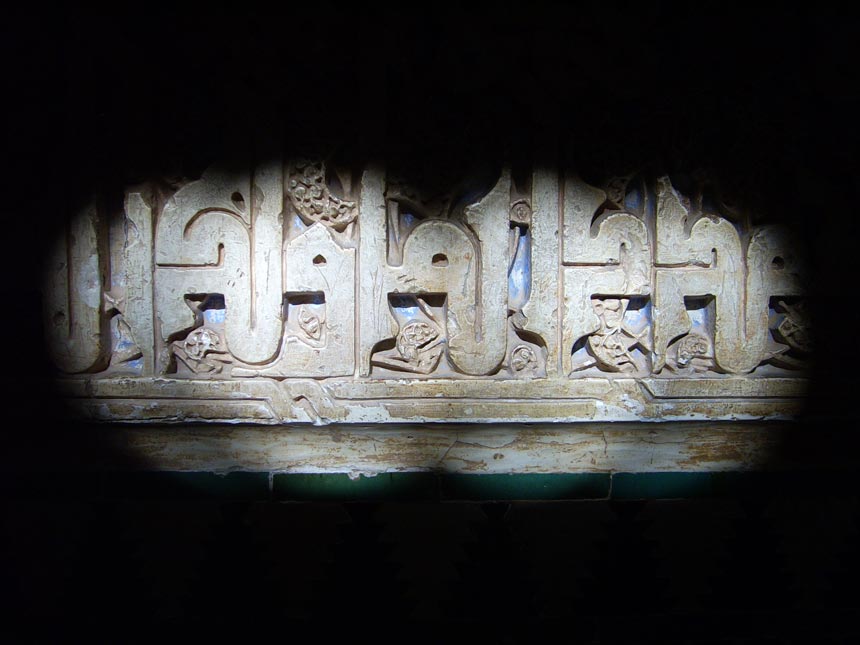 If the view from the ramparts of the Alhambra is fantastic, even more fantastic is the one we enjoy from the opposite side, across the Darro Valley, in the Albayzín quarter. This is an old Islamic neighborhood made up of pretty whitewashed buildings, scattered in a maze of alleys and small squares. 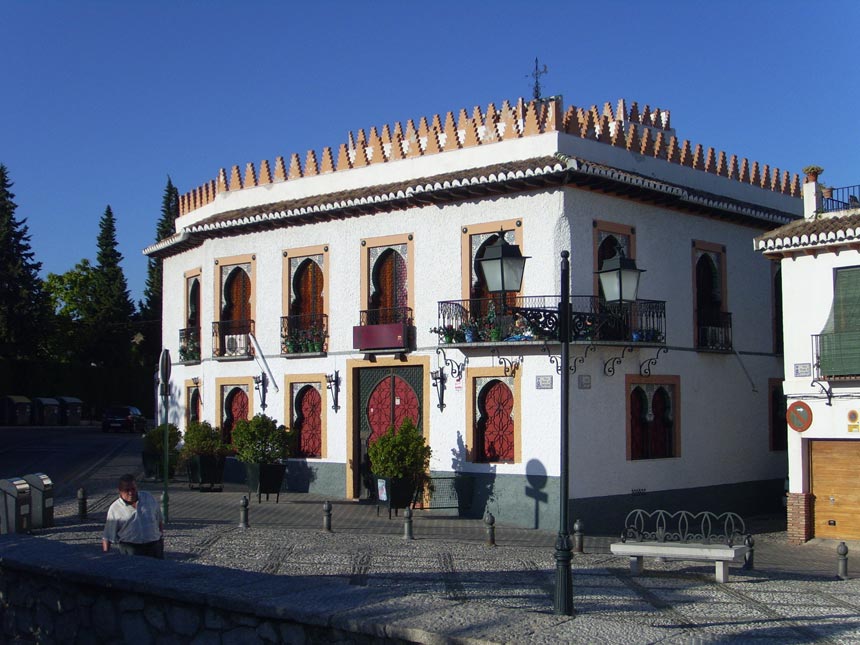 Architecture of the Albayzín quarter

A small crowd of tourists and locals alike gathers on the terrace of St. Nicholas’ Church to admire the superb panorama: the old city and the valley lie below while the magnificent walls of the Alhambra and the summits of the Sierra Nevada in the background shimmer in the sunshine. A winding path along the ravine takes us from the Albayzín to Sacromonte, a traditional Romani quarter perched on the hillside. Sacromonte is well known for its caves that were dwelled in for centuries by Romani peoples.

Today, most caves have been turned into hotels, bars, museums and tablao, that is, venues for flamenco performances.

After an undefined number of tapas, we finish our long stroll at the Ermita de San Miguel Alto to reward ourselves with another great view and another cold beer.

As soon as we got off the bus in Cordoba, we realize Granada’s heat was nothing compared to what awaits us here. A pharmacy sign indicates 42° C. Lorenzo looks at me, shocked. Traveling in Andalusia in August was not a brilliant idea maybe. Well, at least, growing up on the shore of the Mediterranean in Southern Italy has made us quite resistant to heat. 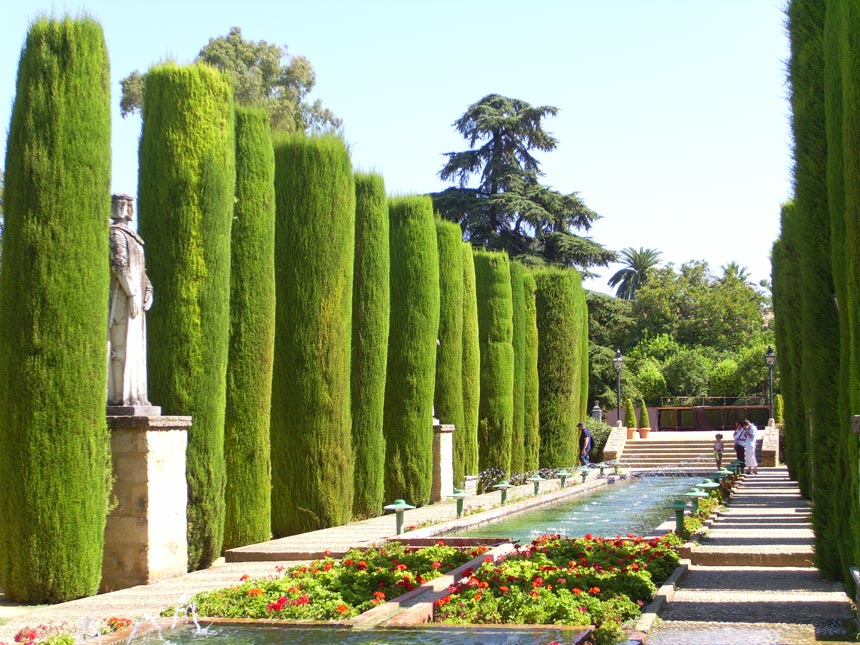 Despite the arid climate, Cordoba doesn’t fail to fascinate us with its hundreds of churches, the old gates and city walls, white houses with flowered balconies giving way to pebbled alleys. The old Jewish ghetto, La Juderia, is probably Cordoba’s most atmospheric neighbor, a place in which time seems to have stopped.

Three synagogues, some Hebrew inscriptions, memorial plates and statues are what remains of the flourishing Jewish community that lived here. Vivid testimony of the city’s glorious past are the Roman bridge, the Torre de la Calahorra and the Alcázar de los Reyes Cristianos. Cordoba’s worldwide fame, however, is linked to the Mosque-Cathedral.

It doesn’t take an arts expert to understand this is one of the most marvelous structures ever built.

The mosque dates back to the 10th century, the apex of the Cordoba caliphate. When the Christian conquerors captured the city, stricken by the majesty of the temple, they did not raise it to the ground; instead they erected a whole cathedral right in the middle of the mosque. 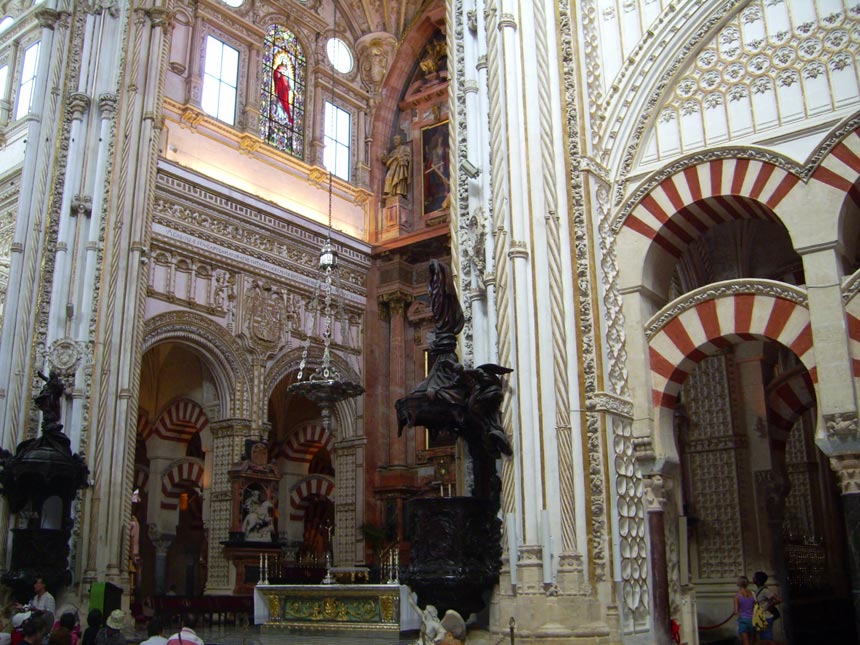 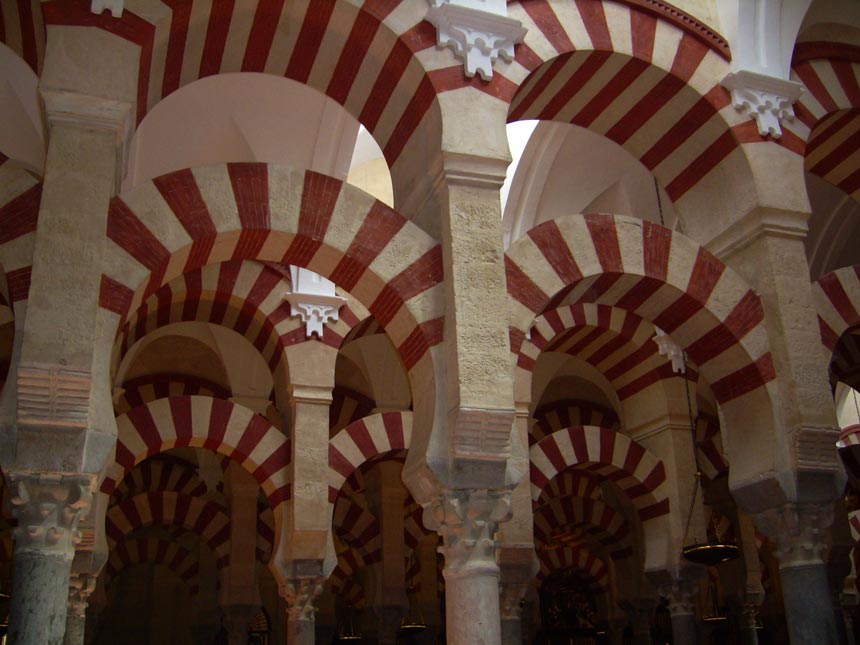 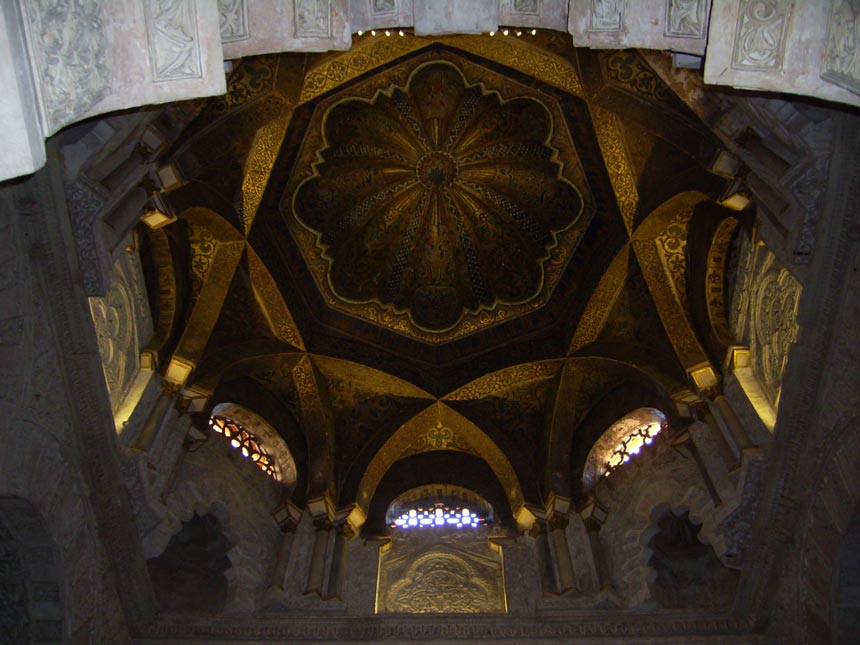 The final stop of our trip is Seville, which along with Granada and Cordoba forms Andalusia’s Golden Triangle. Seville is the most populous city as well as the most buzzing city in southern Spain. It’s not our first time in Seville, hence sightseeing is not our priority. On a self-run tour de tapas we hit some of our favorite spots in town. 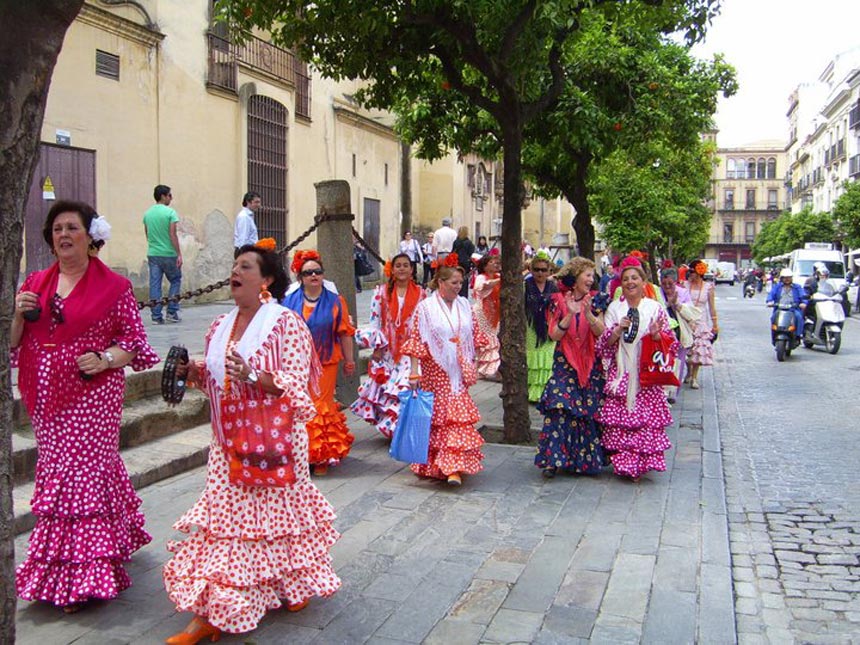 First on our list is Casa Manolo, a simple restaurant serving fish and meat delicacies located in the working-class district of Triana. We love Triana because is the most authentic and possibly liveliest part of Seville. Not many tourists make it to this shore of the Guadalquivir and everything, from the houses, to the shops, the restaurants and the tablaos flamencos feels more real.

Triana’s riverfront restaurants and bars make a great setting for a night out. Once our appetite is sated, we allow ourselves a stroll around the charming old city, dominated by the gigantic Cathedral and its bell-tower, la Giralda.

Built on the ashes of an ancient mosque, the Cathedral of Seville is one of the largest religious buildings in the world.

Within lie the mortal remains of Christopher Columbus. The golden age of Seville is indissolubly bond to the discovery of the American continent. At that time fleets of galleons loaded with immeasurable riches would cross the Guadalquivir passing by the iconic watchtower of Torre del Oro. Wisely, we spend the hottest hours of the day in shady places like the Alcázar, a Moorish fort converted by the Spanish kings in a fabulous palace surrounded by gardens. 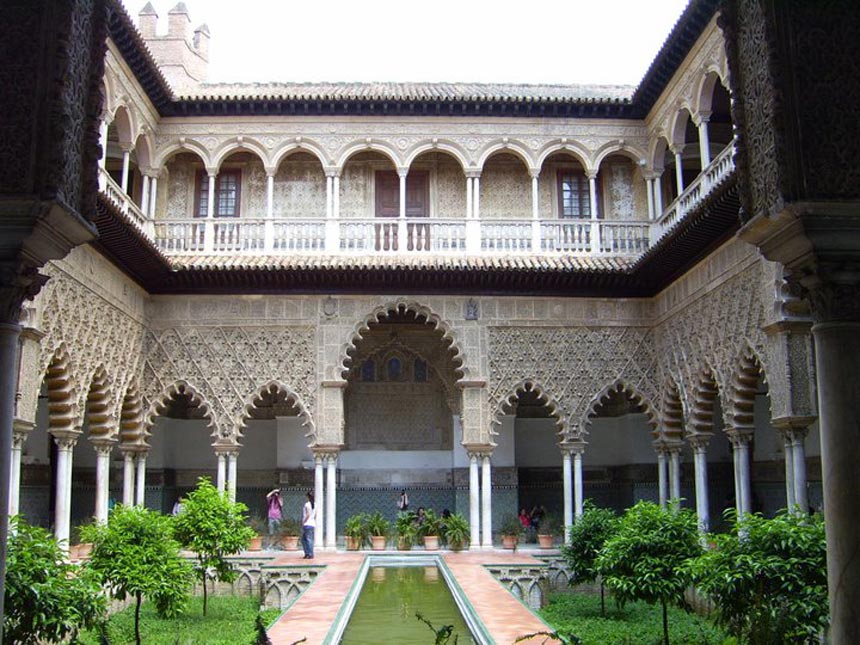 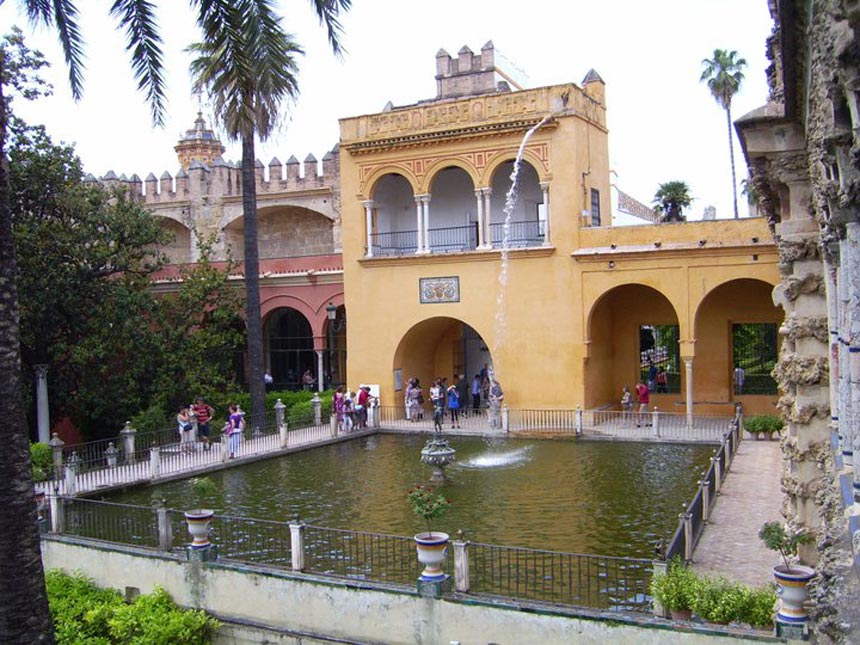 After the sun starts to go down, we meander around Santa Cruz quarter, featuring typical Andalusian scenes: cramped alleys, bright-colored doors, balconies decked out with flowers, hidden patios and orange trees. Another famous landmark of Seville is Plaza de España, an immense oval square enclosed by a beautiful building with towers and tiled alcoves representing all the provinces of Spain. Charming by day, seductive by night. It’s only after sunset that Seville gets really alive, when the sevillanos—famed for their wit and festive character—pour out in the streets and throng the bars to party till sunrise.

The most important events in Seville are the Holy Week and the Feria de Abril.

Having attended the Feria I must say that it’s something unique: carriages and horses parades, corridas, illuminations, games, colorful casetas (bars) filled with food and alcohol, people dressed up in traditional clothes dancing the local sevillana dance. 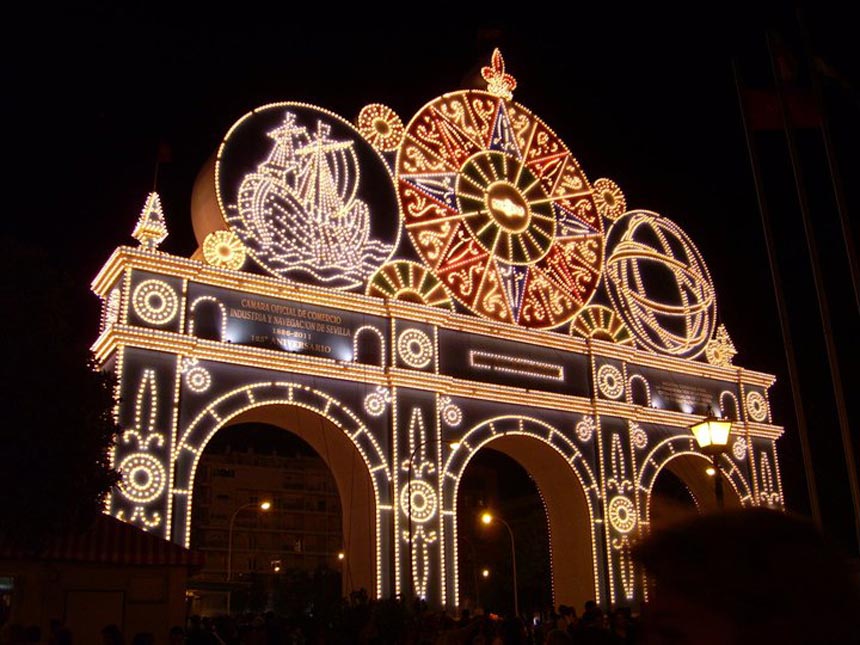 At first sight the Feria might seem a triumph of clichés, a showy party aimed at attracting tourists. Quite the contrary, there is nothing more authentic and heart-felt by the Sevillians than their beloved Feria. ♦

What To Do When You Lose Your Passport Overseas