Apocalypse When, Exactly? | Deconstructing the Myths of Chichen Itza

Back in 2012, curious about the looming Mayan apocalypse, our senior editor travelled to Mexico in search of end-of-the-world answers. Here’s what he found.

I dodged the blocks, pyramids and letter openers of glistening obsidian, and sidestepped the gold and silver necklaces spelling my name in Mayan characters and headed straight for the calendars.

I didn’t go for the engraved copper, carved stone or plaster-cast replicas of the original Mayan calendar wheel, but rather chose the colourful 12-month versions featuring photographs of the great Mayan ruins.

Finding one, I quickly turned to December 2012, fully expecting the grid of squares to end with 21 and then nothing—except perhaps the sort of terrifying sea monsters that lurked on the uncharted territories of old maps.

Instead, this calendar continued to December 31, like any other regular calendar.

“Is everything OK, señor?” the sales assistant asked, seeing my concern. “We have 18-month calendars if you prefer,” he added, only further deepening my confusion.

For years I had heard that December 21, 2012, would be the End of Days—countless books and documentaries citing a Mayan prophecy couldn’t possibly be wrong. But would a Mayan gift shop just a few miles from the greatest of all Mayan cities really print and sell faulty calendars?

In 2007, Chichen Itza was declared one of the New Seven Wonders of the World. Located within easy day-tripping distance of the Mexican tourist hot spots of Cancun, Cozumel and Playa del Carmen, it’s also one of the most visited of Mayan ruins.

Construction of the city is believed to have begun in AD 750, and by the 10th century it was one of the most important sites in the Mayan world. Several hundred years later it was in decline, and by the late 19th century it had been privately purchased by an American who engaged in enthusiastic amateur archaeology while also serving as the U.S. Consul to the Yucatan. Later sold to a wealthy Mexican, it was only recently reacquired by the government.

To reach the temples we first had to run dozens of souvenir sellers who lined the winding path that stretched from the entrance up to the heart of the site. Vendors offered chess sets, fridge magnets, lurid T-shirts and clay flutes that imitate the rasping roar of a jaguar.

“The sellers have been admitted by the land owner,” our guide Hector, explained. “He’s still in dispute with the government over the financial arrangement so he started selling permits to souvenir vendors.” 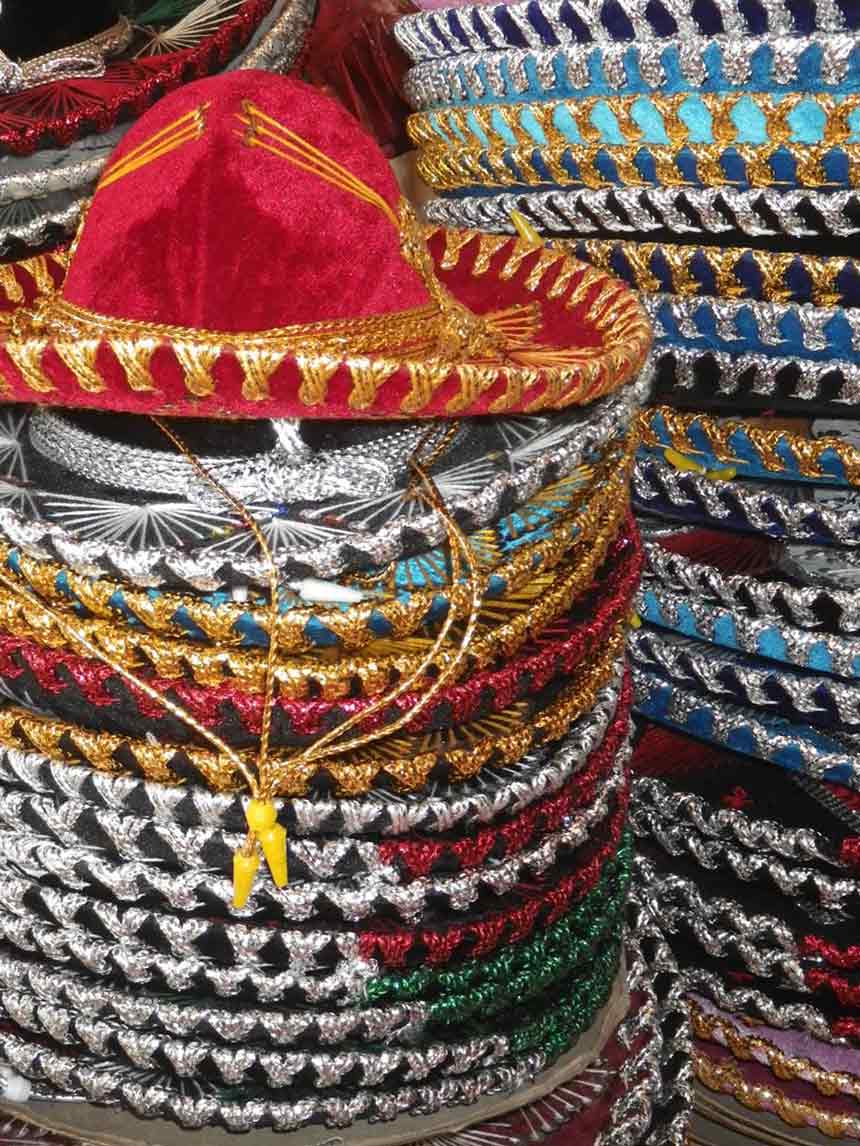 “It’s not normally like this,” he added, as someone tried to tempt me with a T-shirt from the End is Nigh collection.

“And what about that?” I asked, gesturing to the apocalyptic reference.

“I will get to that once we’re inside,” Hector answered cryptically.

As we emerged from kitsch alley, the view opened up and there, towering above the immaculate lawns, was the mighty Temple of Kukulkan, the classic Mayan image that graces every postcard, calendar and travel poster of Mexico—and the reason Chichen Itza is a new world wonder. The five-square-kilometre complex of temples, ball courts and monuments that comprise the ancient city stretched as far as the eye could see, dominated by that main pyramid (the temple) soaring 30 metres into the cloud-smudged sky.

As Hector provided a snapshot history of the city and its construction, I watched solitary visitors in flowing white robes stride around Kukulkan, holding aloft large crystals and chanting under their breath. Children raced screaming across the lawns, weaving around groups that sat in tight circles holding hands and incanting, while miniature Mayan women in traditional huipils dress shyly offered embroidered handkerchiefs.

Hector led us to a spot where a clap of the hands is answered with a bird-like chirp echoing back from the top of the temple. He explained how, twice a year on the equinox, as the sun begins to dip, a snake-like shadow writhes its way down the pyramid in a display that mesmerizes visitors today just as completely as it enthralled the ancient Maya…although perhaps with less fear! 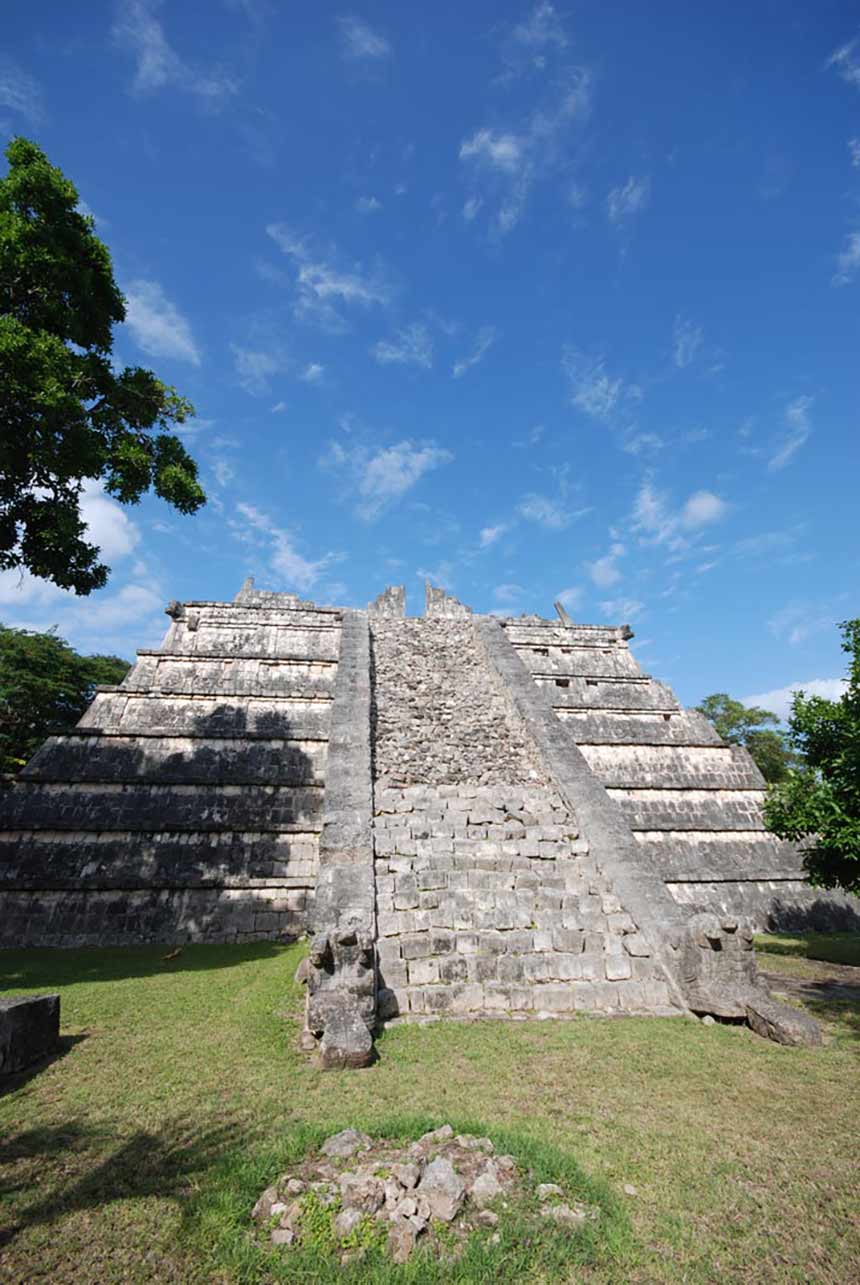 The step pyramid was designed so that a snake-like shadow slithers down during the equinox.

We learned of the human sacrifices and the epic contests in the Great Ball Court. We heard about the Mayans’ surgical prowess, the rise and fall of their empire, their astronomical skills and Elton John’s 2010 concert there.

“Paul McCartney may be performing here next year,” he added.

“So there is going to be a ‘next year’?” I prompted. Hector turned and led us to the Tzompantli, or Skull Platform.

“Explore the site at your leisure,” he said. “But be back at the main gate in an hour.” With that Hector disappeared through a cluster of Russians, taking with him the secret of the End of Days.

Etiquette experts declare that it is unacceptable to wear white after Labour Day, but no one advises what should be worn to mark the end of the world. Should it be black-tie in keeping with the sobriety of the event; or perhaps a purple boa to go out with a bang? With my apocalyptic questions unanswered, I decided to seek out another Mayan ruin.

Some claim that there may be more than 4,000 Mayan ruins spread throughout Central America. Some, like Chichen Itza, Guatemala’s Tikal—which was featured in Star Wars—or the beachfront Tulum just south of Playa del Carmen, attract hundreds of thousands of visitors each year, while many others remain undiscovered or unclaimed from the jungle.

Unlike the Aztecs, the Maya never died out. In fact, there are seven million Maya scattered throughout Central America today. Although fully integrated into modern society, many have retained their traditional language and customs, and are often identifiable by their diminutive build.

“A few years ago, the state government built basketball courts in the centre of many of the towns throughout the Yucatan,” Hector explained. “But they weren’t a big hit. Mayans don’t play basketball!”

For my second Mayan ruin I decided to visit Cobá, an overlooked gem visited by fewer travellers, still largely overgrown, and the only pyramid in Mexico that visitors can climb. 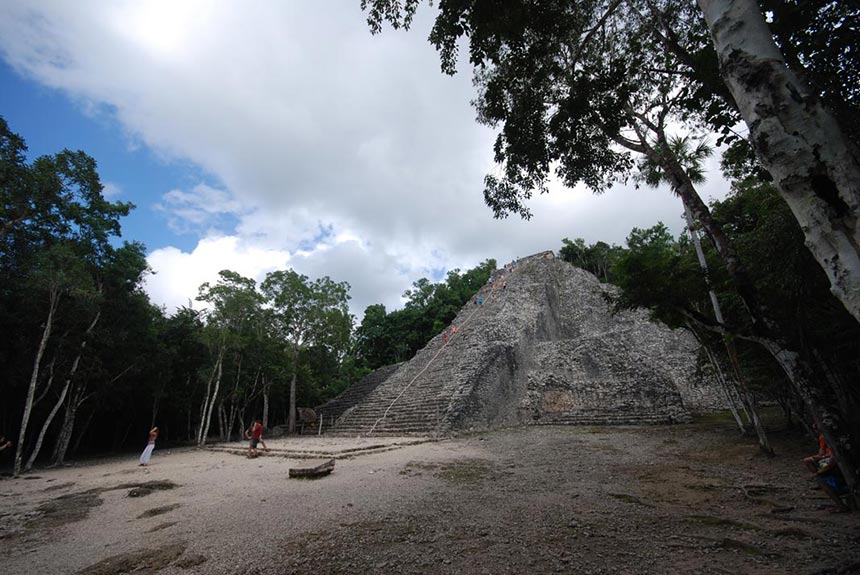 The site’s main pyramid, Nohoch Mul, is part of the 5 percent reclaimed from the jungle.

Cobá was one of the most powerful centres in the northern Yucatan, and home to at least 50,000 Maya. It was only rediscovered in the 1920s, and efforts at recovering it only began in the 1970s.

“It’s not that it was ever lost,” our Mayan guide Carlos explained, as we followed a winding trail through thick jungle. “The Maya knew where it was, it was only the archaeologists who rediscovered it.”

Our tree-shaded path followed the contour of a jungle-clad hill, which, on closer inspection, was not a hill at all, but the enormous stones of a barely discernible and completely overgrown wall. There were no vendors and relatively few visitors, just tiny frogs no larger than a fingernail, and lizards which scampered noisily through the dry forest floor.

We crossed the remnants of one of the ancient roads, or sacbes, which radiate from Cobá, and after a 15-minute trek, emerged before the site’s main pyramid, Nohoch Mul, the tallest pyramid in the Yucatan. Looming 42 metres, with the jungle still claiming its back and lower reaches, a guide rope stretched up the centre toward the summit. 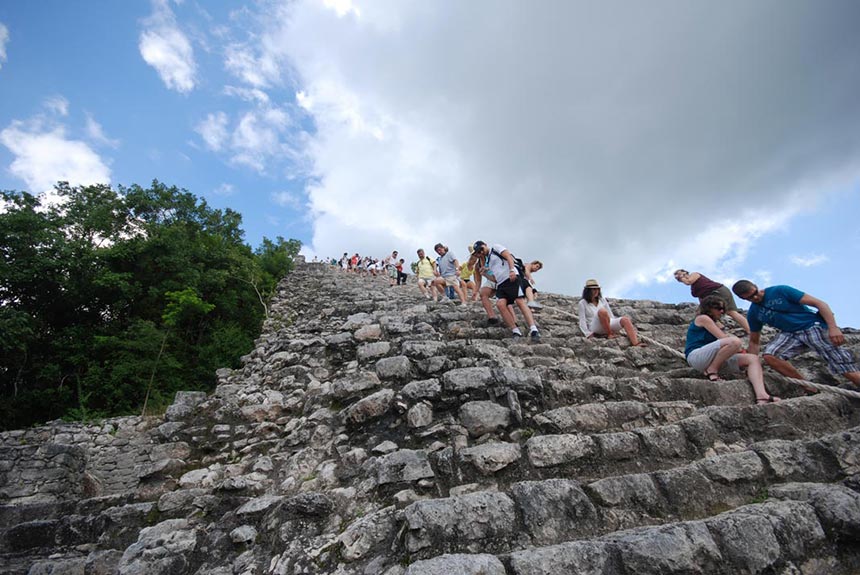 Only 120 enormous steps to the top!

“Only about five percent of Cobá has been reclaimed from the jungle,” Carlos explained. “So, unlike other ruins, the government allows visitors to climb this one so that the revenue can be used to fund further archaeological studies.”

The stones were very tall and each of the 120 enormous crumbling steps was an effort. It was only when stopping halfway up and turning around to survey the view that I realized just how steep it was. This was The End of Days itself for anyone suffering from vertigo, but the reward of viewing the seemingly untouched jungle, stretching in every direction, made the exertion very worthwhile. 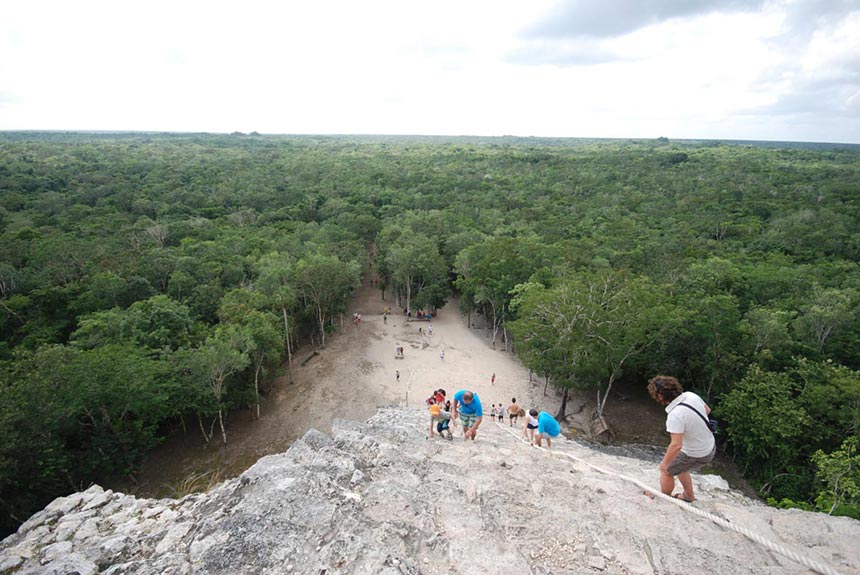 The view from the top of Nohoch Mul is worth the climb.

More people die descending Mount Everest than climbing up it. As I peered over the first precarious, precipitous step on my way down, I could understand why. I felt guilty for my earlier contempt of those I had passed on the way up who were descending Nohoch Mul on their bottoms, with the guide rope feverishly gripped between white knuckles. Indiana Jones would never explore in such an ignominious posture, I had scoffed. But now, faced with the possibility of cartwheeling down, I quietly asked for forgiveness from the Mayan gods.

We continued our exploration of Cobá by visiting the ball court and observatory. The walls were covered with verdant moss, while narrow passageways inside offered a luxuriant and ancient cold that was so at odds with the oppressive heat that it felt as though we were drinking in the past.

We stopped at a great stone stela sheltered by a wooden roof and protected by a wire fence.

“So what’s this about the world ending on December 21?” I asked, using the site as the perfect opportunity to address the elephant in the temple.

Carlos looked at me nonchalantly. 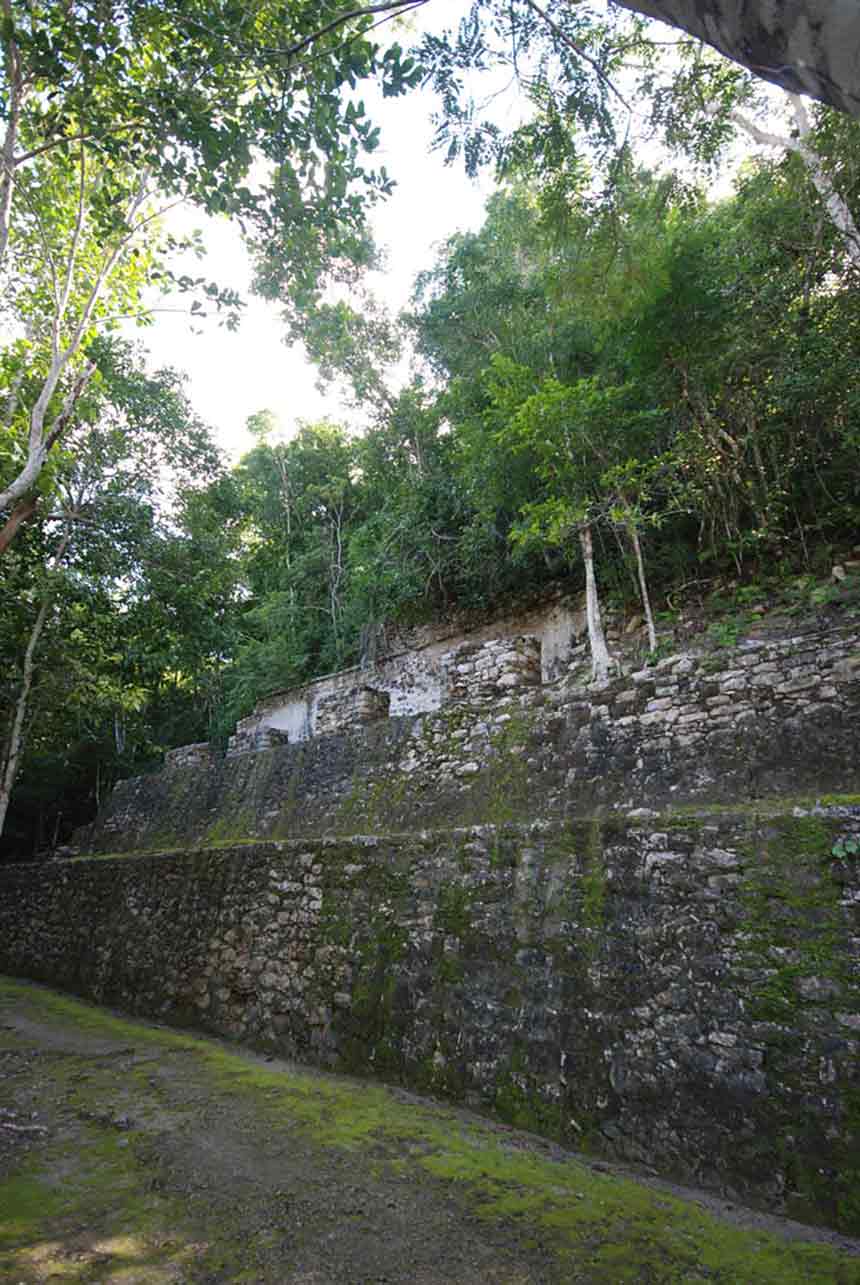 Many ruins remain hidden or undiscovered.

“Si,” he answered. “The new era may bring change. Some Maya believed that Balun-Yokte—one of the gods of the underworld—will appear, but others simply believe that it will be a time for celebration. But no Maya believe the world will end.”

“Not even the guys selling the T-shirts at Chichen Itza?” I ask.

“Especially not them,” he laughed. “They’d lose money if the world ended in December!”

The 10 Worst Things About Expat Life

Alone Together: How to Travel and Stay Sane with a Friend