There is, perhaps, one literary drink more legendary than any other, and it takes a bit of spycraft to find its place of birth.

Standing on one of Venice’s famous bridges, clutching a postcard reproduction of a Canaletto masterpiece and gazing at the identical view before me, sent shivers down my spine. The great Venetian artist and I were separated by several centuries, but I could almost feel his easel propped beside me.

One of my great travel pleasures comes from following in the footsteps of my favourite artists, authors, leaders and explorers. In Zanzibar, I visited the British Consulate where Burton and Speke began their African explorations, and where Dr. Livingstone’s body lay in rest before his final journey home. And just down its narrow, labyrinthine streets, I stood by the house in which Farrokh Bulsara—known to the world as Queen’s Freddie Mercury—was born. In the hills outside Ocho Rios, Jamaica, I climbed the steep, winding roads strolled by a young Bob Marley.

If I don’t have time for a full pilgrimage, there are always the places in which my favourites would eat or drink; the spots where they gained sustenance or refreshment, where they observed the regulars and perhaps sketched characters for later works. Many have long since disappeared, or been renovated beyond recognition, but some still provide a tangible glimpse into the real worlds of some of my legends.

When in Haiti, English author Graham Greene enjoyed an afternoon tipple at Port-au-Prince’s Hotel Oloffson—later immortalized in his novel The Comedians as the Hotel Trianon. In the sleepy Welsh fishing village of Laugharne, Dylan Thomas spent many a smoke fogged evening at a corner table of Brown’s Hotel. While in London, Sir Arthur Conan Doyle and Charles Dickens both frequented the infamous Ye Olde Cheshire Cheese. 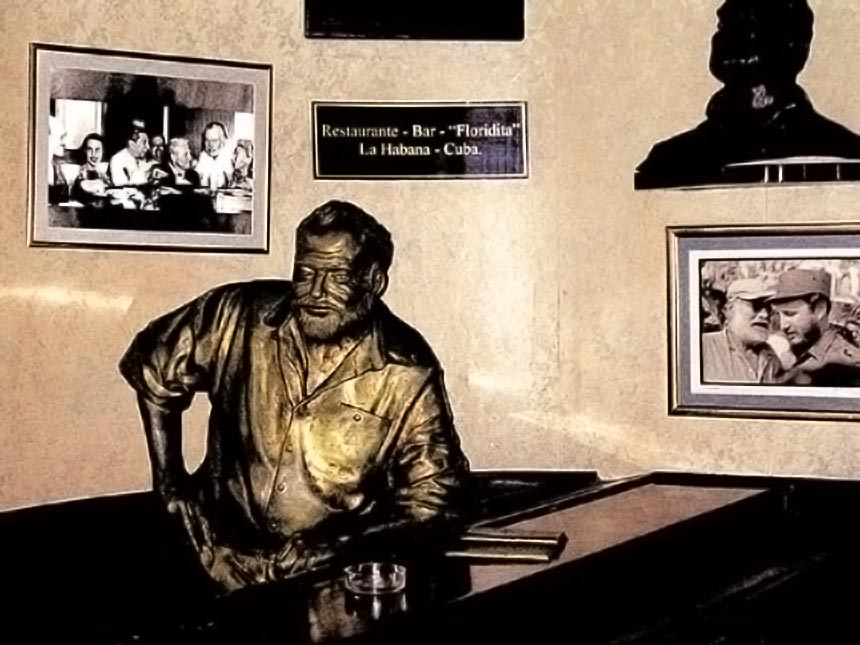 A sculpture of Hemingway lounging at one of his favourite haunts in Havana, Cuba.

Of all the great literary tipplers, there’s likely none as easy to track as Ernest Hemingway. Whether drinking Bellinis in Venice’s Harry’s Bar, or Singapore slings in Singapore at the famed Long Bar in Raffle’s, Papa had his favourite haunts and brews all over the world. But only one drink attained literary legend: the daiquiri in Havana’s Bar Floridita.

Such is the Floridita’s fondness for Hemingway that he still props up the bar today (albeit in life-sized bronze!), while his poison of choice lives forever in his novel Islands in the Stream, where it‘s described as a drink that “could not be improved, or even come close, in any other part of the world.”

But there is perhaps one literary drink more legendary than any other, and it takes a bit of spycraft to find its place of birth.

Surrounded by yacht brokers and palaces, the cozy Dukes Hotel in London has long been the refuge of the wealthy, powerful and connected. The Queen Mum used to quaff here; while Diana, the Princess of Wales, was known to escape the prying eyes of the paparazzi for an afternoon chat with friends. But it was another famous person who left his mark most prominently: James Bond creator, Ian Fleming. 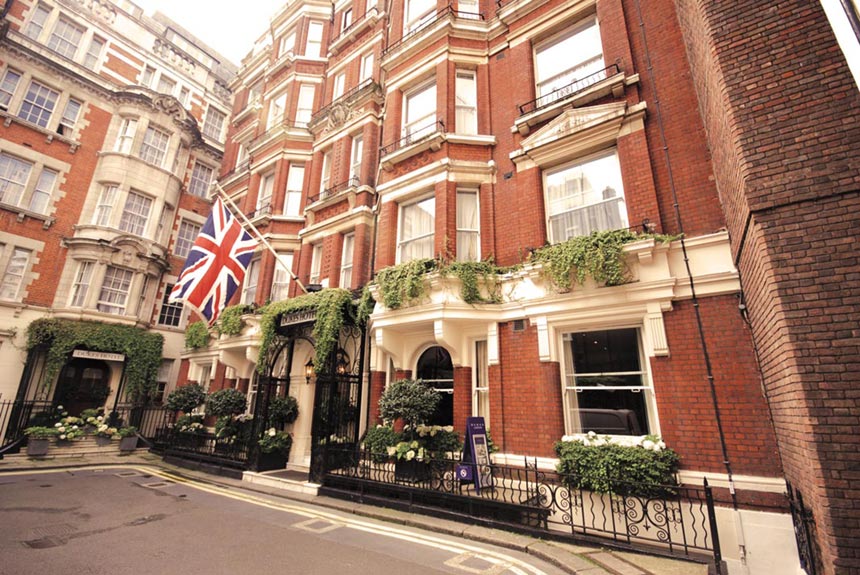 The only thing identifying Dukes is a Union Jack hanging limply in the London rain, and a smartly attired concierge proffering an umbrella. Off the lobby is Dukes bar, a comfortable nook of velvet chairs and crackled oil paintings, where genteelly-folded newspapers await regulars at their usual tables. Perhaps not the ideal place to order grits and watch the latest Lady Gaga video, but an ideal spot for a martini…shaken, not stirred.

Although Fleming moved several times, he always lived within graceful wobbling distance of the secluded Dukes. It was the ideal spot to unwind from Naval Intelligence, or his Fleet Street newspaper office, and it was here that he first encountered a martini so good that it made its way into legend in the Bond books and movies that followed.

“Mr. Fleming was a regular here,” acknowledges Alessandro Palazzi, Dukes’ legendary bartender, who is regarded by many as the finest martini maestro in all of London. Resplendent in crisp white jacket, Alessandro wheels out a carefully prepared martini wagon and places it beside my table. His voice is charming, and his confident actions those of a master craftsman. 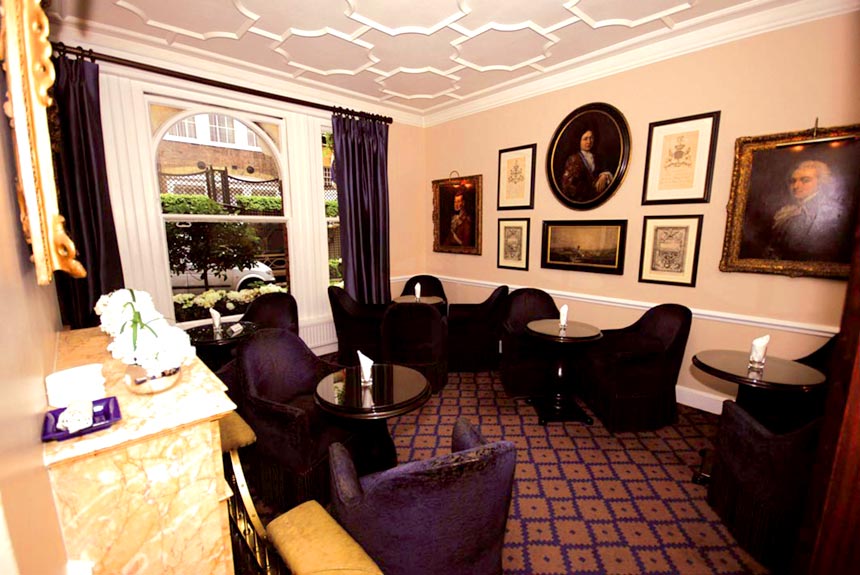 In a case of life imitating art, Dukes’ martini menu is filled with references to Bond: The Moneypenny, The Strangways, and my personal choice, The Classic Vesper.

“The martini Mr. Fleming described in his first novel Casino Royale and in which he named The Vesper, was the one he drank here,” Declan Murphy, the hotel’s sales and marketing director, explains, as Alessandro places a small, ice-frosted martini glass on the wagon.

Like most authors, Fleming drew heavily on real life for the places, characters and events in his books. The villainous Goldfinger was reputedly named for architect Erno Goldfinger, whose post-modern cement edifices Fleming regarded with particular disdain. James Bond himself was named after an American ornithologist of the same name, whose Birds of the West Indies was a well-thumbed mainstay of Fleming’s Jamaican home.

As a journalist, Fleming also called on his world travels to destinations unimaginably exotic to the average reader in 1950s Britain, and which he later described in his two travel books about the great cities of the world. But Britain, and particularly Fleming’s preferred London haunts, always featured in his best-selling novels.

“Some of the ingredients have changed since Mr. Fleming’s day,” Alessandro explains, as he coaxes an ice-cold, viscous Polish vodka into the glass. “They are either no longer available, or the distiller has changed the formula, so we have modified it to best replicate the original flavour that he liked.”

“Kina Lillet is an example,” he adds, as he finishes oozing a locally-distilled gin into the glass.

“They stopped making it some time ago, so we use Lillet Blanc with a dash of Angostura bitters to offset today’s sweetness.” He finishes with a twist of orange peel with which he caresses the rim of the glass. “Mr. Fleming had a twist of lemon, but you must excuse me as I think the orange works better. There!” he says, delicately placing the diminutive glass before me. 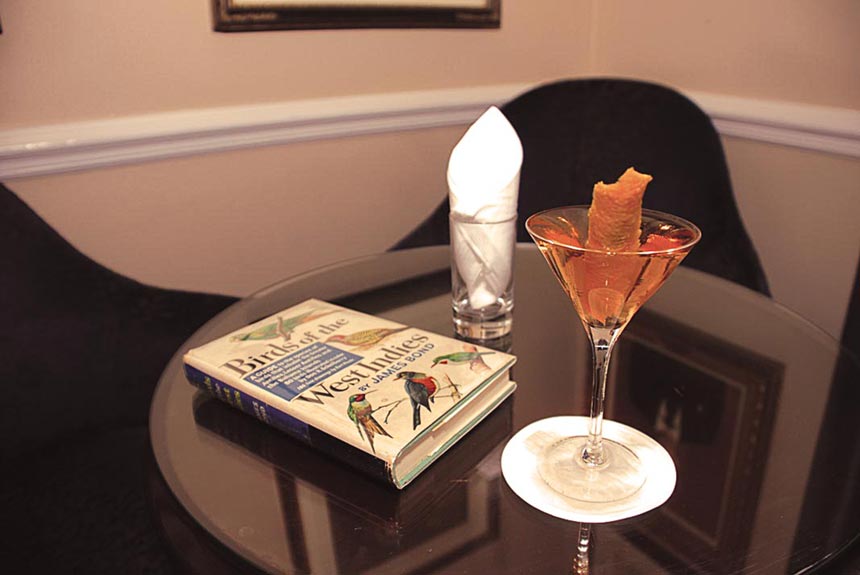 The Vesper sits with a copy of “Birds of the West Indies” by a real life James bond, whose name inspired Fleming’s character

“Not shaken? Not stirred?” I enquire, trying to hide my disappointment.

Alessandro tilts his head to one side patiently. “No, it’s not necessary. You shake or stir to make the drink cold, but we keep the vodka and the gin very, very cold. So, not shaken… or stirred. I’m sorry.”

It may only be a small glass, but this concoction of 100 percent pure and potent alcohol gleams in the light like a saw blade coursing towards Bond’s nether regions. I nervously raise the glass to my face, a bead of sweat forming at my brow, and stare at the chilled liquid with its spiral of peel bobbing drunkenly. The hushed conversation around me seems to go silent. My lips pause at the edge of the glass, suddenly aware that Declan and Alessandro are surveying me intently.

“Delicious,” I state—honestly—and with some degree of surprise.

I like a tipple every now and then, but rarely engage in martinis. “Really nice.”

“Thank you, sir,” Alessandro says, nodding modestly, as he wheels the cart away. I gently sip from the glass before grabbing a handful of nuts from the bowl on my table, in the vain hope they will line my stomach.

“And he used to have these at lunch?” I ask somewhat incredulously, using a small napkin to dab my watering eyes. “Strong?” asks Declan, with an all-knowing smile. “We once had a guest who after his martinis insisted that the cupboard was his room. The glasses may be small, but we actually have a limit of two per person.”

“Well, if the limit is two, it would be rude not to have another, wouldn’t it?” I declare, with false bravado. “After all, You Only Live Twice, Live and Let Die …and all that,” I say, enthusiastically.

Declan rolls his eyes politely, and beckons Alessandro back to the table, while I take another handful of nuts. **

Try it Yourself: The Best Martini Recipes

Fleming didn’t stipulate which brand of vodka Bond preferred—only that it should be made from grain rather than potato.

Modelled on Fleming’s favourite Dukes’ tipple of the 1950s and ’60s, with a few alterations due to the reformulation or discontinuation of the original spirits.

This Week in Travel News: An Entire Country is Now Free on Airbnb