(Leave your question for Brandon here!)

Dear Savvy Traveller: How do I refrain from accidentally offending people of different cultures because I’m not used to their cultural norms?

Customs vary dramatically around the globe, and many things that are considered polite and necessary in one place are rude and offensive in others, so it’s easy to offend strangers anywhere because you’ll simply never know every cultural norm, everywhere you’re traveling. The good news is that we can get a quick sense of basic cultural practices by taking ten minutes to Google a destination in advance. Most incidents of accidental cultural offense will originate with your body, and these are the most likely culprits:

Hands. From a simple thumbs up to the “okay” symbol, what may be positive and encouraging where you are from could be terribly insulting elsewhere. This will be harder for those who are particularly demonstrative when speaking, but try your hardest to speak with your words, not your hands when traveling. Remember that gestures are colloquial, not universal, so consider them to be slang. You wouldn’t use slang with someone visiting your country for the first time because it won’t have the same meaning, so don’t use gestures either. But don’t stuff your hands in your pockets to avoid using them, either, because that’s also offensive to some! Get a feel for proper hand etiquette in your destination.

Eyes. Eye contact silently speaks volumes in every culture, but what it says ranges from respect to flirtation to downright rudeness depending where you are. It’s a strangely personal interaction, even between strangers, so you want to make sure you’re using it correctly, which in some places means not using it at all. Look into how to use those peepers in advance.

Feet. This is more about your shoes than anything else, but it’s a good thing to look up before heading out. Whether or not you can wear shoes inside homes or place of worship is of major importance to many cultures, and in some places, showing the bottoms of your shoes to others is an insult, too. You don’t want to step into any offensive situations here, so know before you go. 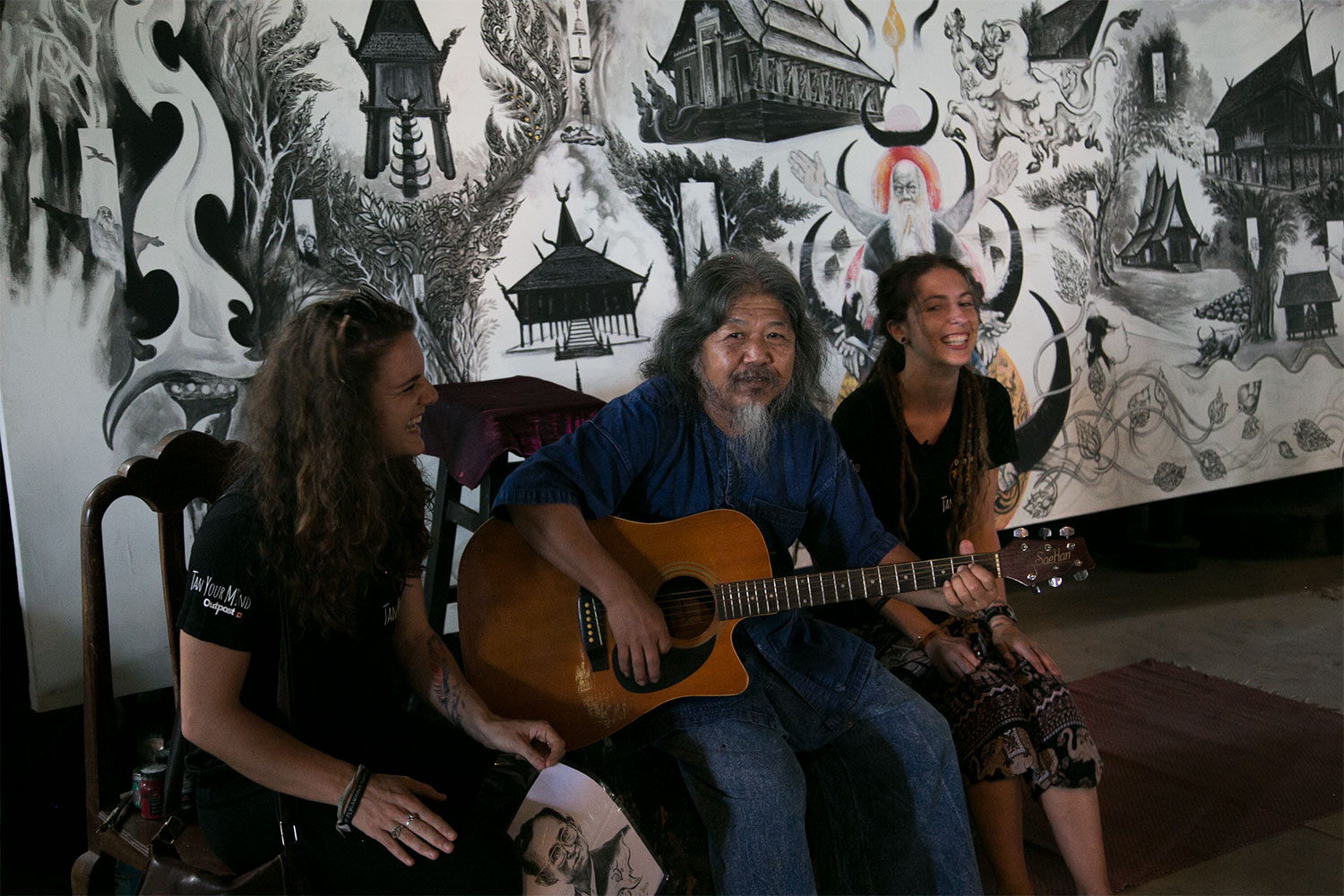 Taking a genuine interest in the Thai people. (Outpost-John Price)

Mouth. Speech is an obvious way to offend, but culturally appropriate verbal communication is not easy to ascertain with a quick web search, so I’m reserving that aspect for later. For now, let’s talk about the other thing we do most often with our mouths: eating. Food is social, ritual, sometimes religious, and sometimes political. What we do with and around it can convey many messages. Should you eat silently or loudly? Ask for seconds, or leave some food on your plate? Does the placement of your utensils, or the order in which you eat your food matter? Some of this is beyond the need of a leisure traveller, more likely to be encountered during business meals, but getting a general taste for food etiquette is a wise idea.

Now let’s talk about that other thing we do with our mouths: speaking. The reason this is much more difficult to grasp than body language is because the way we use our language is less taught than absorbed. In other words, we tell our children which table manners to use, when to take of their shoes, and how strong of a handshake to make, and while we do teach some basic speech practices, most of the cultural inferences we employ and interpret from language are subtle and learned through experience, not lessons. This means that you’re not going to understand them, or even have a method for discovering most of them online or in a book. And this is how you’ll most likely offend someone with speech. So what can you do?

You can still do some research in advance and become acquainted with a few good verbal habits, but it’s important to accept that you’re not going to intuit the majority of customs that aren’t taught, so your best tool is deference. Understanding that you’re not aware of the best practices in this location and acting accordingly will go a much longer than trying to blend in and jumping into every situation as though you were an expert. That will almost always read as arrogant, as you unwittingly offend and don’t seem to care. By all means interact with as many locals as possible, but don’t bulldoze your way into any situation. And, as I sense that you’re a polite person who cares about other people’s feelings and impression of you, understand that they will know you’re an outsider, and will make allowances for your ignorance of their customs. That is, as long as you’re demonstrating that deference and not acting brash.

The bottom line is simple enough, Mercy: Take a few minutes to Google those items listed above, and use your words to show friendship and respect, not entitlement or arrogance. You’ll still unintentionally create some offenses, but most of the people you encounter will be less likely to take offense than to chuckle at your faux pax, as long as they can sense it was unintentional.

Are Europe’s Budget Airlines the Real Deal… or...

Should I Save Visiting Romantic Places Till I...

Do you experience post-travel blues after any trip?...

Can I Hide in Your Suitcase?

The Joy of Solo Travel? Meeting Your Most...

Yes, there are redback coffee snakes in the...

Could this pass for carry-on? The Savvy Traveller...