In the fifth and final installment of his special dirty gravel bike series for Outpost, where he explores the rail trails of southern Ontario, Rob Brodey stays closer to home, and even wonders why he ever leaves.

I’ll admit, as I started out on my gravel bike adventures along Ontario’s rail trails, I still felt a bit “trapped” having to stay in my home province because of the pandemic. But I was trying to make lemonade with the lemons thrown at us by Covid-19. These micro-journeys, however, have turned out to be far sweeter than lemonade!

Cycling these trails has not only been liberating, but it has been humbling, too.  Why have I always been in such a rush to leave Ontario when there are so many corners I haven’t yet explored? But perhaps more profoundly, writing about the trails has given me the opportunity to take a closer look at our collective history — the beautiful, the tragic, and everything in between, particularly as it relates to Indigenous and European relations.

Of course, how we treat this crucial aspect of our history has a profound impact on our present and future, as well.

As much as the rail trails have been my solo getaway this year, they also provide an amazing experience for the entire family, particularly because these car-free paths don’t tend to be too technical and have many entry points to customize the length of the journey. During my outings, I’ve seen many families riding together. It’s downright inspiring to see another generation being raised to embrace the simple pleasure of human-powered adventures.

The reality is that I’ve only scratched the surface of Ontario’s plentiful rail trails. There’s still so much more to explore — both by bike and by diving into the history of the area. My bucket-list continues to grow, including a series of rail trails around Lindsey, Ontario (Omemee Rail Trail and Victoria South Rail Trail), as well as the Ottawa Valley Rail Trail and the Escarpment Rail Trail (Hamilton area).

If I can’t get to them all this year, then I will most definitely continue my exploration in the coming years (hopefully with my wife and son!). Without further ado, here are two more rail trails worth riding in southern Ontario.

It doesn’t get much more urban than this: Toronto’s Beltline Trail built along a section of a commuter rail line developed in the late 1800s to bring together the city’s core with its planned suburbs. Unfortunately for investors at the time, the steam trains ran for only two years before, yes, running out of steam and money. Looking at the archival map of the route, it’s clear the developers were decades ahead of their time, as the original Beltline loop sits very comfortably inside the current city limits.

A quick web search nets me a GPS map of the Beltline rail trail set down by the Toronto Bicycling Network. The route incorporates other ravine systems to form a leisurely 20-kilometre loop (“Balfour & Beltline Loop”).

I decide to cycle the route on a weekday morning, as weekends can get a bit hectic on the trail, with increased human traffic (and their pets). The non-Beltline section of my loop passes near Casa Loma, an imposing early 20th-century mansion with a superb view out over the city. After a quick one-kilometre traverse through residential neighbourhoods, I leave the road traffic behind and dive into David A. Balfour Park, a steep ravine system that cuts through the city following the winding Yellow Creek. 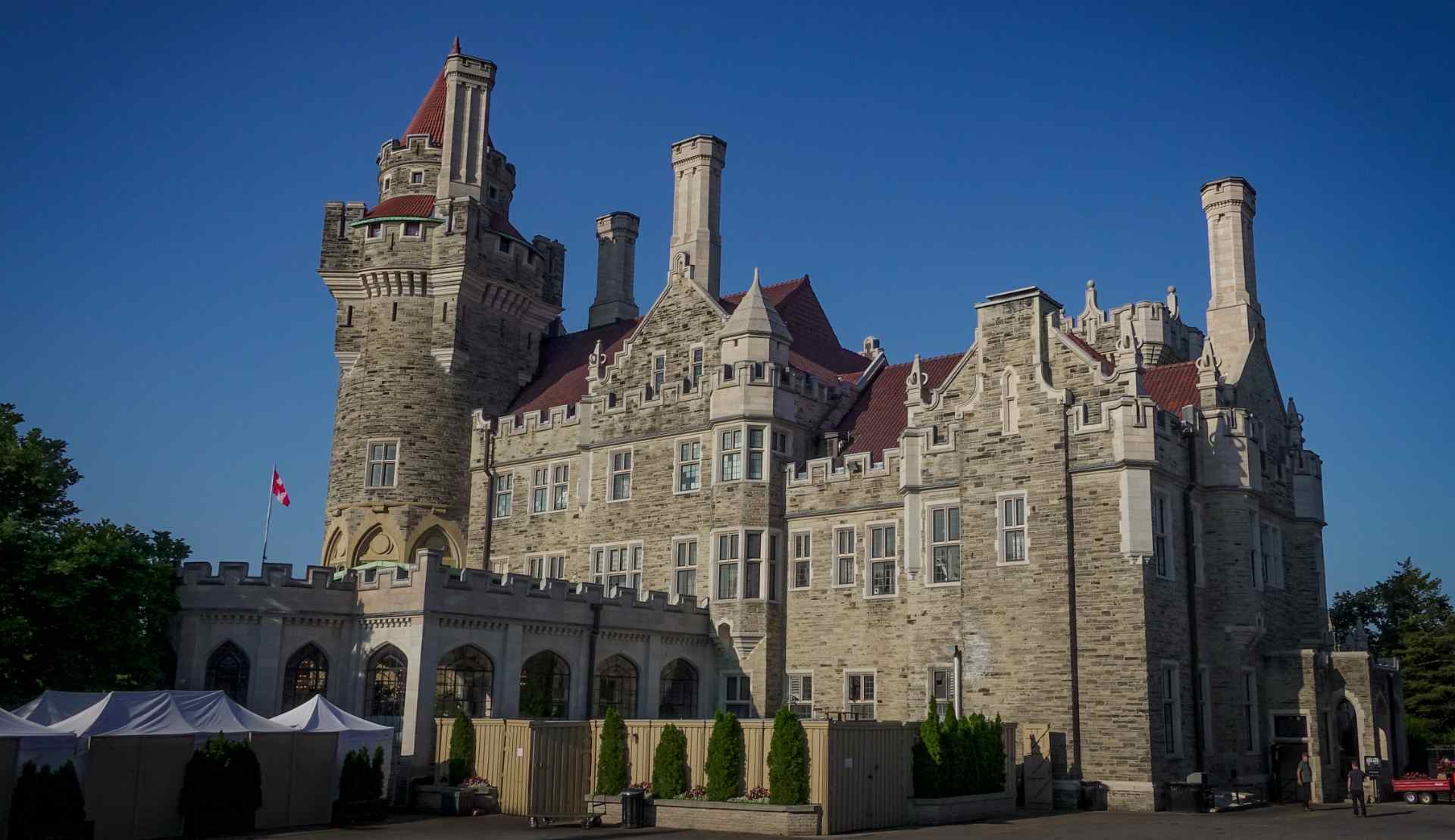 Though not really part of the Beltline trail, Rob cycles passes iconic Casa Loma in Toronto.

A little further on, I arrive at the official start of the Beltline Trail close to the Evergreen Brick Works, an amazing community and nature hub built around a former quarry and brick factory, which, interestingly enough, provided the building blocks for Casa Loma. During previous runs through this park, I’ve seen snakes, owls, foxes, and deer. 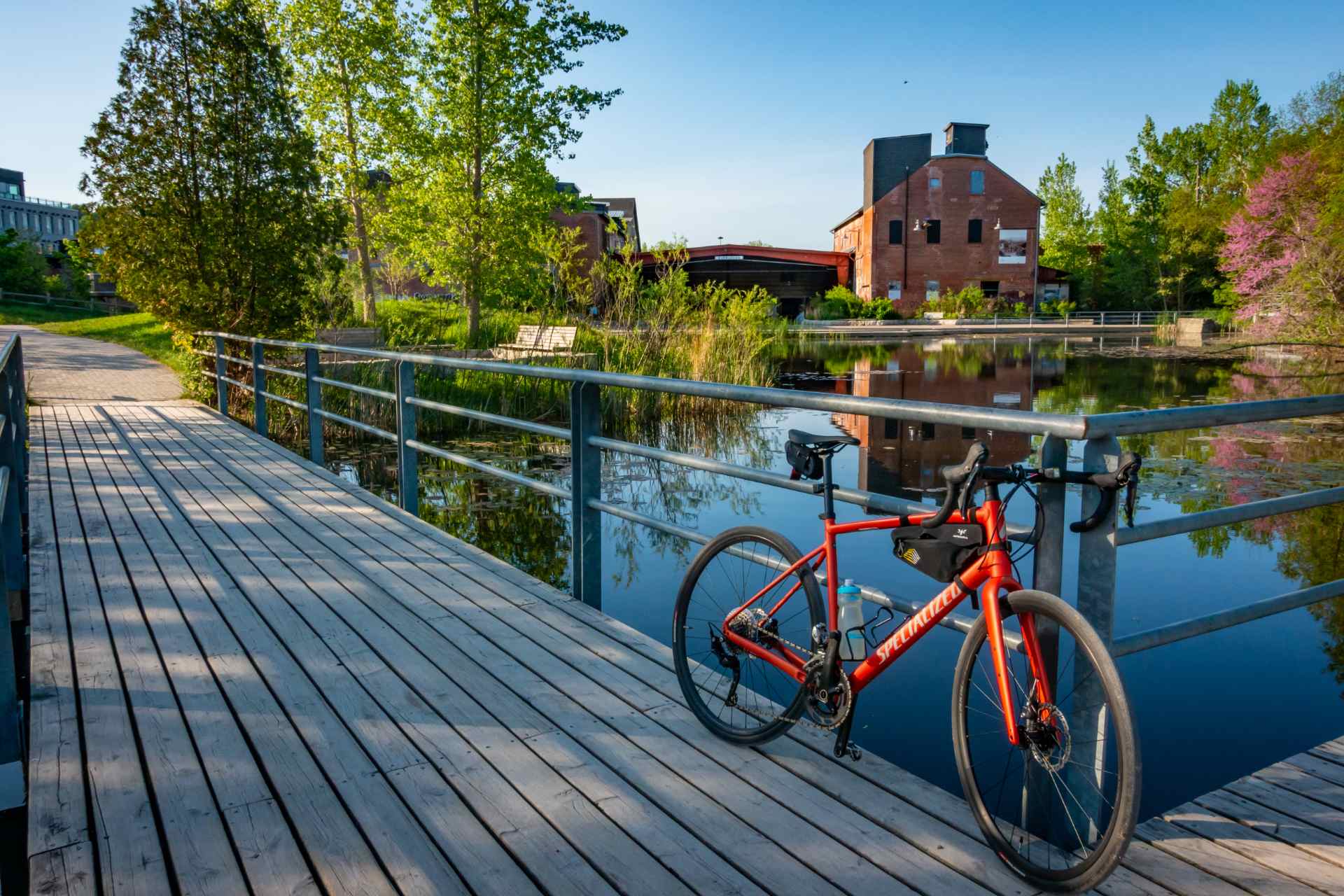 Not too far into the day’s ride, Rob arrives at the official start of the Beltline Trail near Evergreen Brick Works. 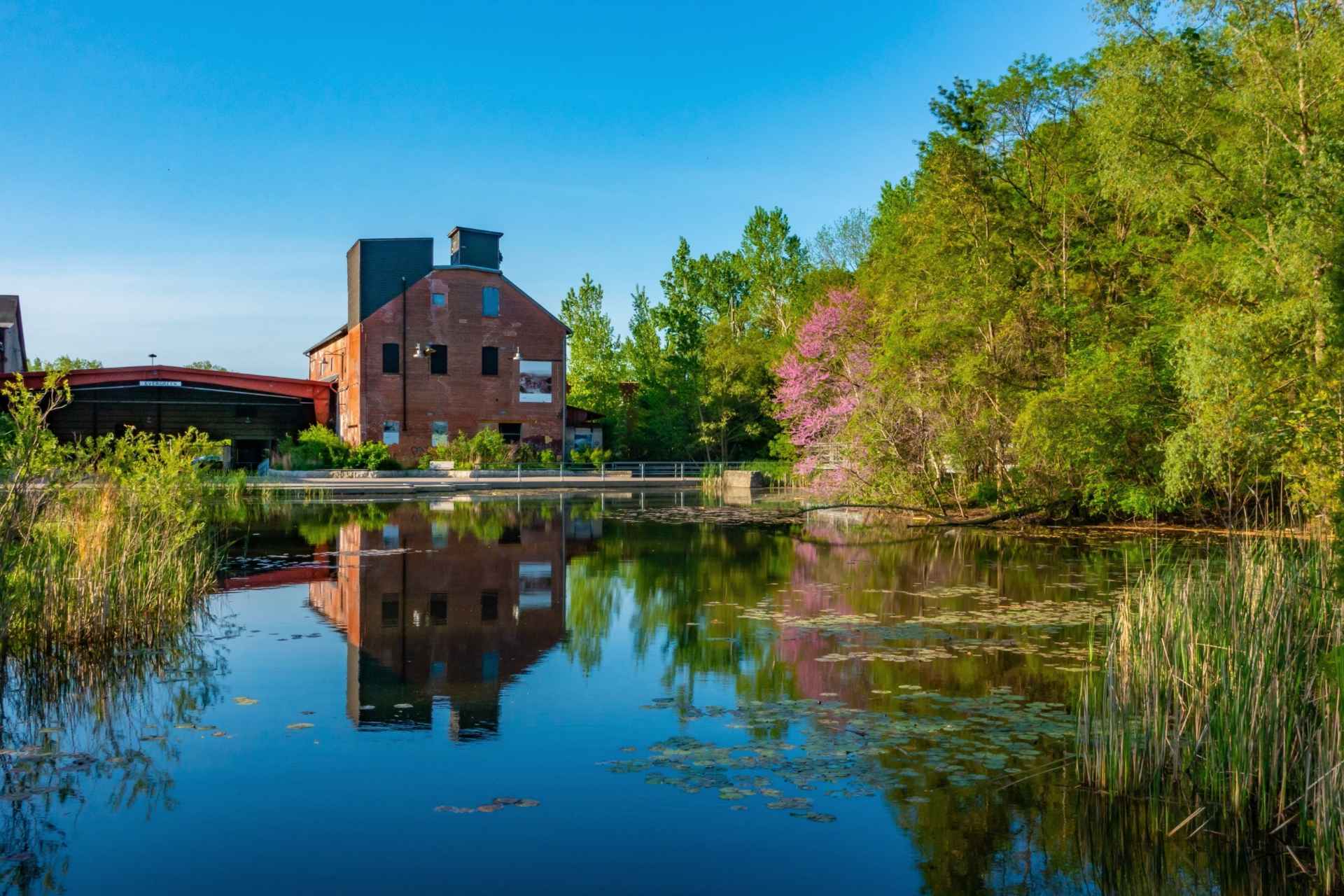 I cycle north along a wide dirt path through Moore Park Ravine, and then onward through the vast greenery of Mt. Pleasant Cemetery. The route leads me right past my father’s final resting place (I pay his stone a visit before pedalling on).

Soon enough, the Beltline Trail takes me over Yonge Street via a picturesque iron railway bridge and past the expansive railyards of Toronto’s present-day electric commuter trains (a.k.a. the Toronto Transit Commission/TTC). The final leg of the trail travels through some upscale neighbourhoods shaded by a voluminous forest canopy (beware: there are several busy street crossings without traffic lights in this section). 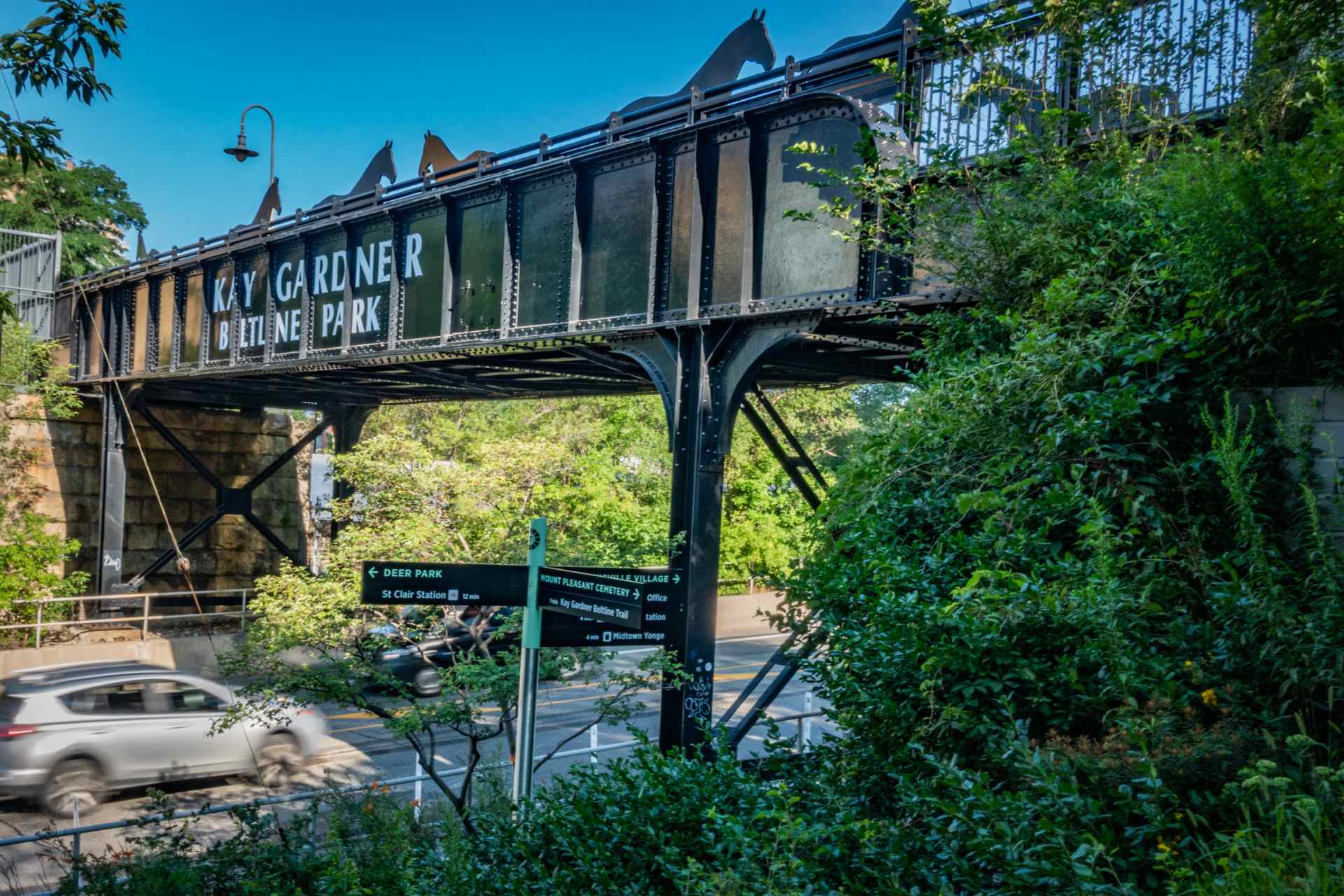 Scenes from the trail: sections of the Beltline in Toronto, past iron bridges, Yonge Street, the rail-yards, and marshland. 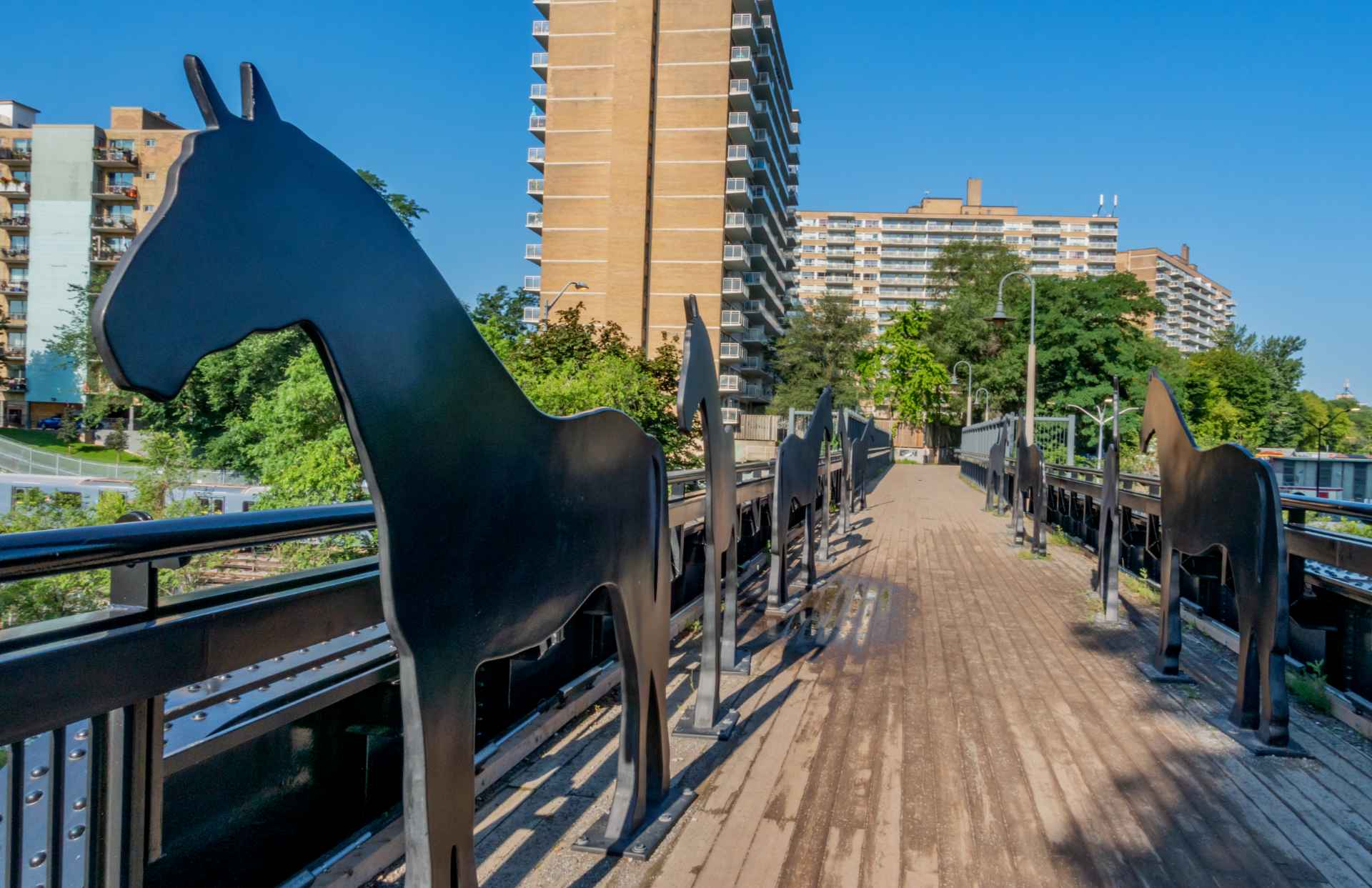 Although the main section of the Beltline Trail ends abruptly at a concrete wall by Allen Road, my journey doesn’t end there. I enter another superb urban ravine system, Cedarvale Park. Incredibly, this park was on the chopping block in the 1960s with plans to pave it over for a highway. Thankfully, visionaries like Jane Jacobs and former Toronto mayor John Sewall fought the good fight to ensure the highway was never built, and the forests and marshlands had a permanent home in the city.

At the beginning of my rail-trail adventures in May, I had parked in Waubaushene on the southern shores of Georgian Bay to ride south along the Uhthoff Trail (Post I). This same parking lot on Coldwater Road also serves the northbound Tay Shore Trail.

I had heard great things about the Tay, but I regrettably didn’t have time to ride it, first time around. So I made a plan to return later in the summer to ride this 17-kilometre trail back and forth, so I could experience it for myself (a comfortable 34-km ride).

The Tay is part of the 160-kilometre Simcoe County Loop Trail, which is, coincidently, shaped like a lopsided human heart and carves its way through the countryside between Barrie, Midland, and Orillia and touches the shores of Georgian Bay, Lake Couchiching, and Lake Simcoe (it’s also part of the mammoth Trans-Canada Trail system).

Arriving back at the parking lot in Waubaushene feels like returning to the beginning of my love affair with gravel biking on the rail trails. I set off along the Tay Shore Trail, which is fully paved and is, by far, the most family-friendly rail trail I’ve ridden to date, with its inviting benches, picnic tables, and a few bathrooms along the way.

BTW: a road bike is perfectly suitable for this journey. Of course, for some hardcore mountain bikers, this and other rail trails may seem too tame to contemplate. But for the vast majority of us, trails like Tay offer an opportunity to cycle, hike, and run for kilometres surrounded by nature’s splendour. 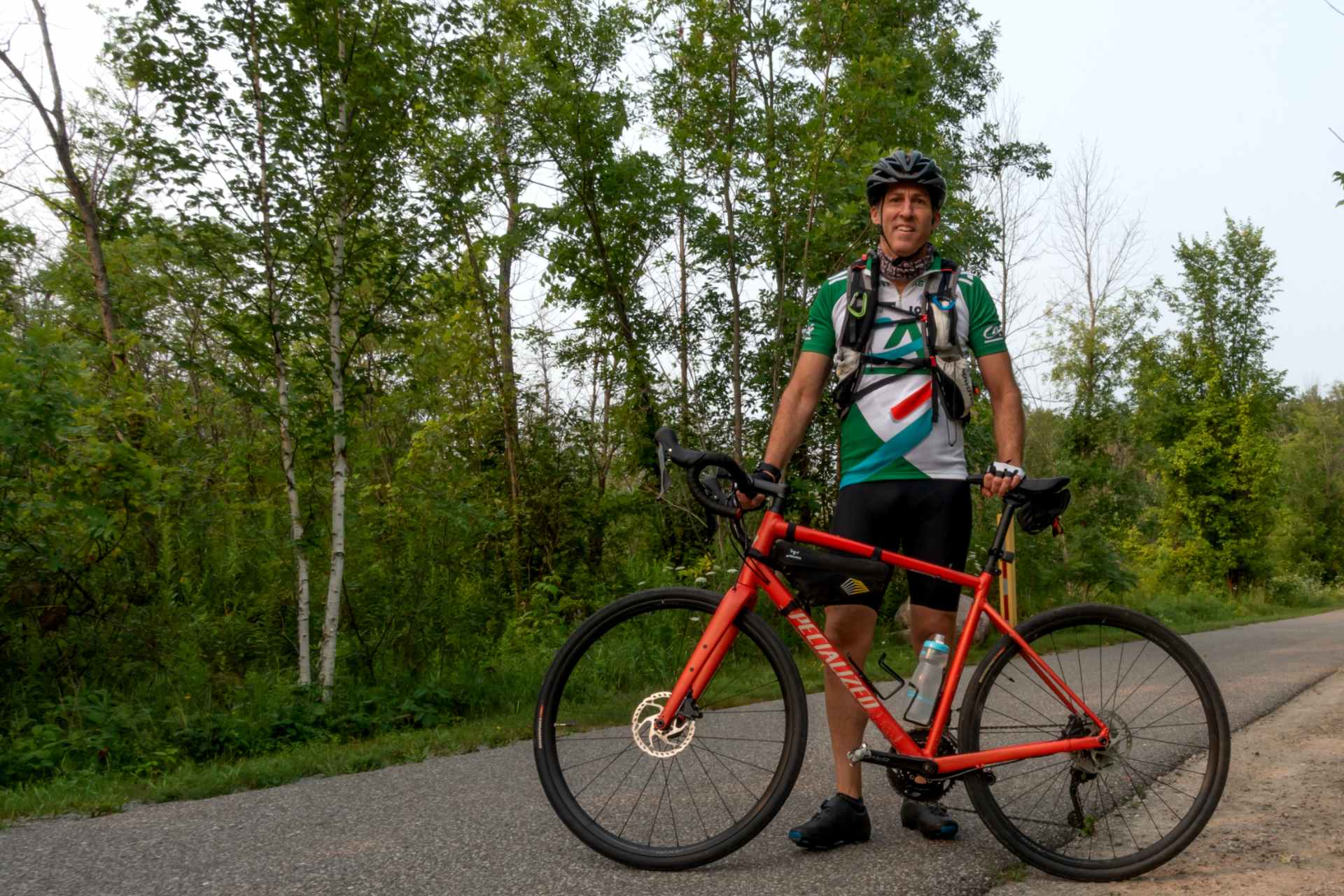 Bucolic scenes along the Tay Shore Trail, where according to our author, a road bike is perfectly suitable! 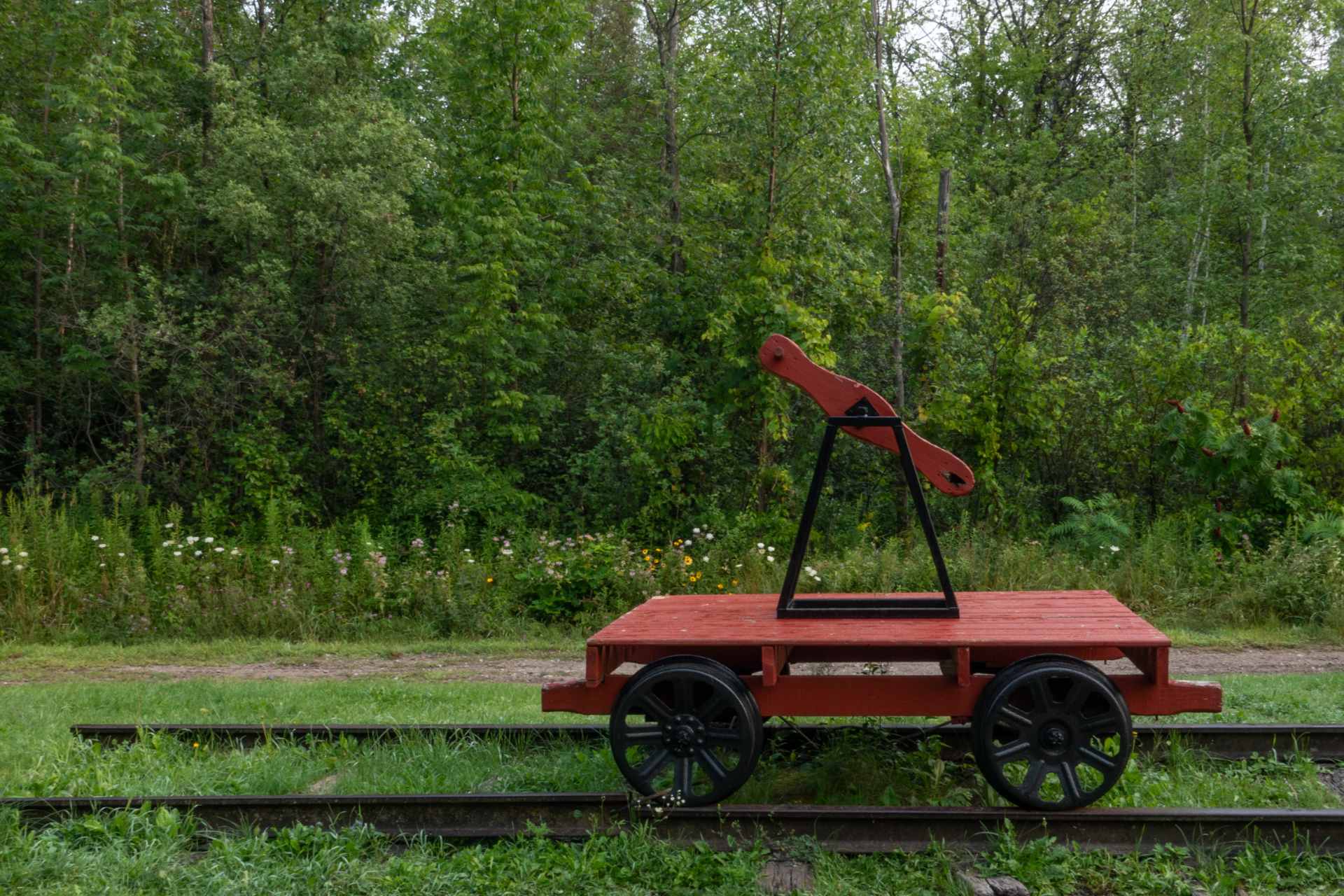 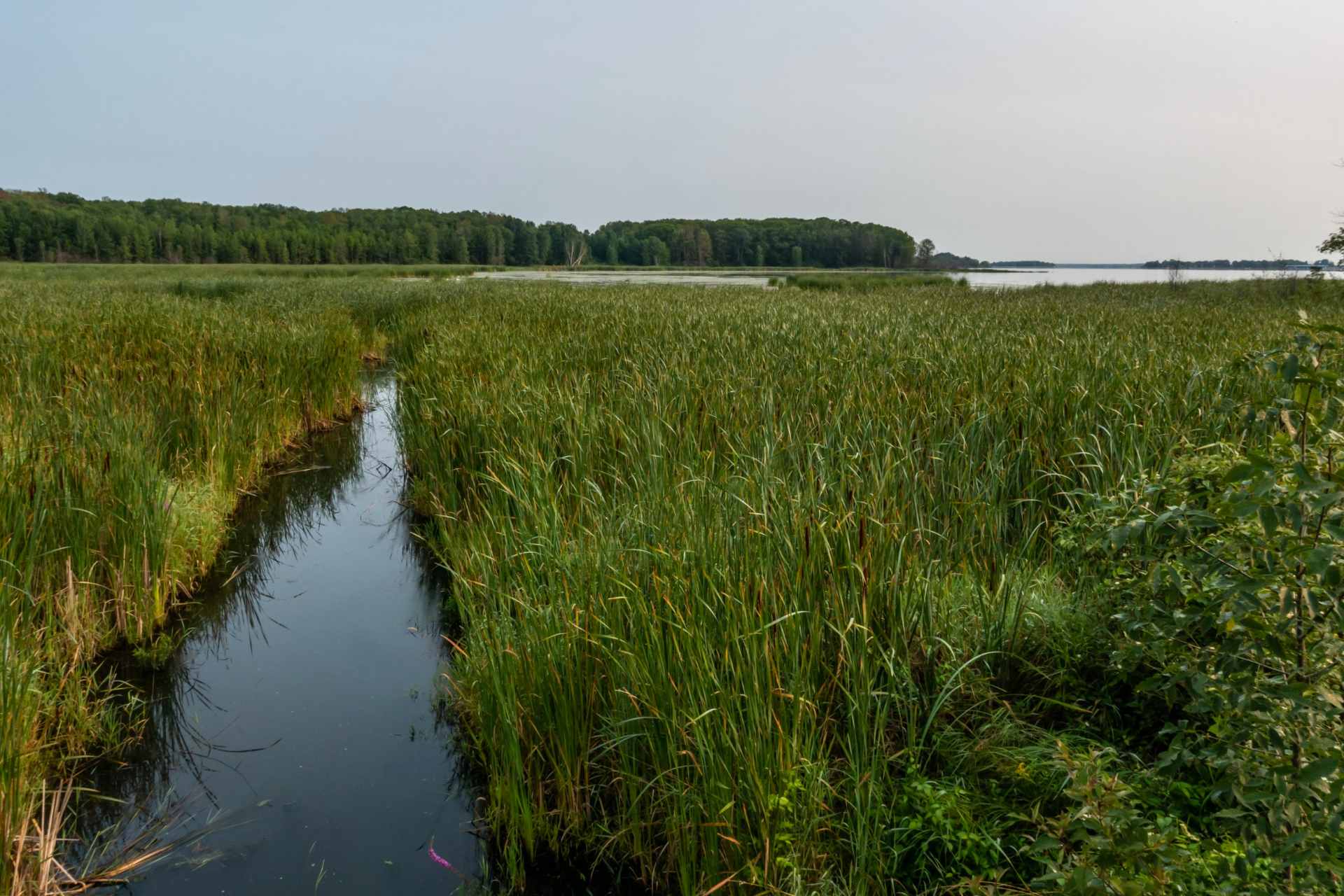 The trail meanders through Waubaushene, which is home to hundreds of residents and many more cottagers. It’s superbly located near the Severn River and Matchedash Bay, which historically made the area prime territory for living, exploring, and trade. The region was home to the Huron-Wendat for countless centuries who farmed and trapped in the region.

With the arrival of the Europeans in the 1600s came the booming business of the fur trade, particularly the beaver pelt. We really can’t underestimate the importance of the fur trade in the development of Canada, as the industry continuously expanded its reach to satiate the endless appetite for fur goods in Europe. But we also can’t forget that the beaver wasn’t just a commodity. They have always played a key role in the health of local ecologies by modifying landscapes and creating wetlands that benefitted countless species, large and small.

I pedal alongside open breezy wetlands (thanks beavers!) and play dodge-the-rabbit, as those darting furballs cut on and off the trail countless times. The path also travels through corridors of young forests. The youthful age of those trees shouldn’t surprise me given this trail follows the 19th-century rail line that was built to serve, among other things, several bustling lumber mills.

The cool thing about the Tay Shore Trail is that there are lots of side trails, which is really an invitation to explore beyond the main path — to visit communities, beaches, and marinas. The exploration also comes in the form of ample signage detailing local ecology and history. Along the way, I see handwritten signs (likely not officially sanctioned) with descriptions of the original rail line, and even include archival black and white photos of the old steam trains.

After a leisurely hour of riding, I cycle across a long wooden bridge over the Wye River in view of the recreation of the 17th-century village of Sainte-Marie among the Hurons established by Roman Catholic missionaries. According to the historic site’s website, Sainte-Marie among the Hurons was Ontario’s first European community (it was also apparently the first inland French settlement in North America). 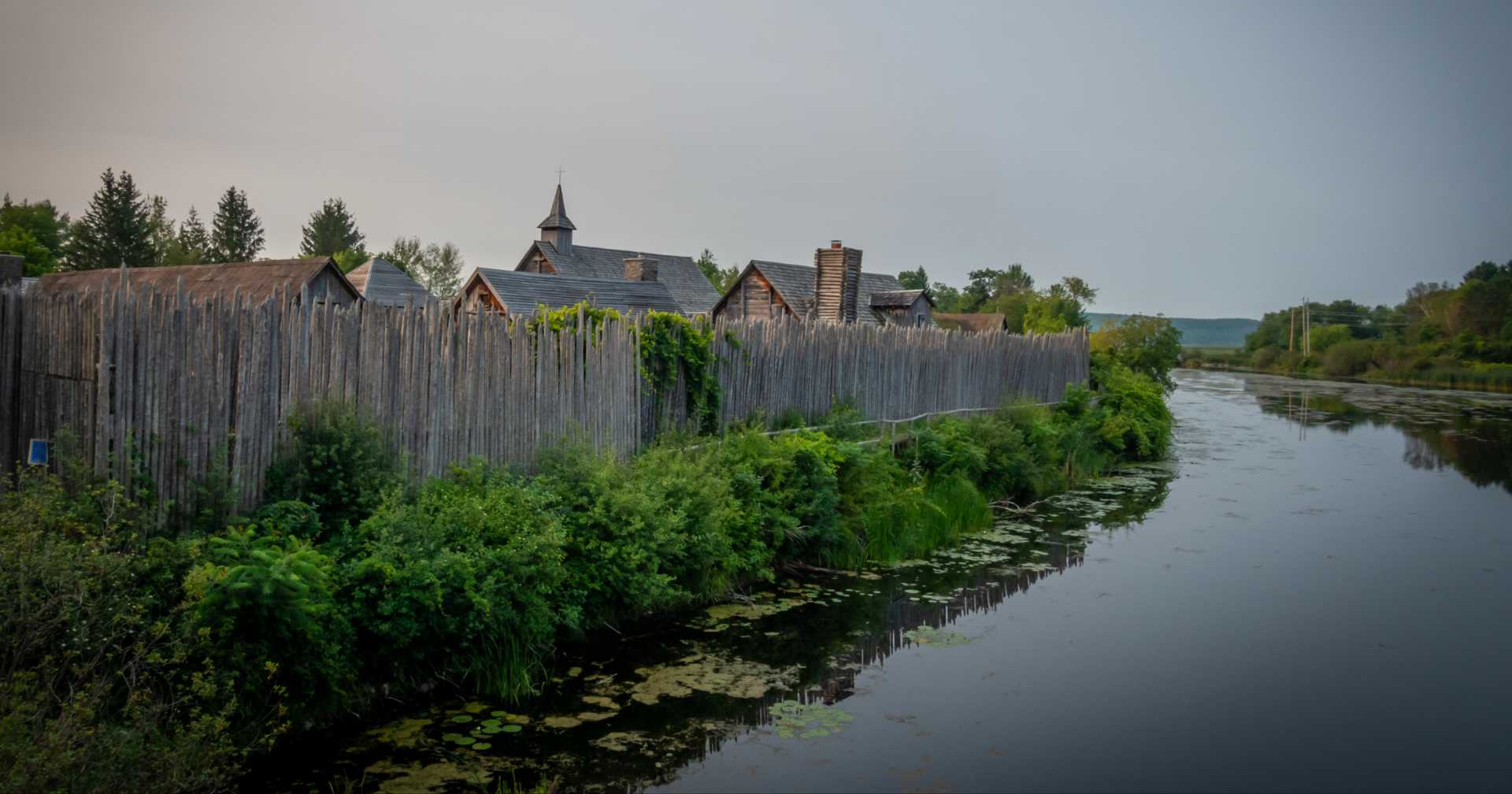 Along the Tay Trail of southern Ontario is the Sainte-Marie among the Hurons village.

Just beyond the bridge, the Tay Shore Trail officially ends, though the path continues on through Midland as part of the Simcoe County Loop. I turn around and begin the ride home, knowing that these rail trails are not just a pandemic love affair — that I will continue to explore them in the coming months and years.

And I have to imagine that as more local governments and community organizations see the inherent value of these rail trails, more will be built and maintained, and more people will come. And perhaps, too, more people will grow to appreciate the multi-layered history and beauty of these places.

For me, the rail trails have been an important reminder that I don’t need to travel thousands of kilometres to have a meaningful experience, to learn something new, or to fire off my orienting reflex (see my Post II for more on the orienting reflex). After all, adventure is a state of mind, and only requires a willingness to explore — even in your own backyard. ♦