Best Destinations for Newbie Indie Travellers? One Expert Newbie Has the Answer

New to indie travel and wondering where to go? Here are some breezy destinations to tick off from the get-go.

You know the type: their skin is not so much tanned as it is stained by the sun, and their hair is weather-beaten: wind-tousled, sun-bleached, seawater-soaked. They are clothed in soft, billowy fabrics—wearable blankets conducive to opportunistic napping—and their tarnished jewelry includes at least one item bearing the Sanskrit mantra om mani padme hum.

Their body, svelte from trekking and diving, is akin to that of an individual in their late twenties or early thirties. But sun-induced wrinkles muddy any clues to their actual age, and their languid confidence and humble wisdom are of someone in their autumn years. When asked how many countries they’ve visited, they rattle off two guesstimates that are 15 digits apart.

This is the seasoned wanderer who, when pressed, will regale their awed dorm-mates with tales of hitchhiking through the Middle East, attending sky burial ceremonies on the Tibetan plateau and partaking in spiritual quests in the Amazon basin. Their life is less on the road than of the road, and there seems to be no adventure they cannot tackle with aptitude and grace.

Yet even these nomads were once green with wide eyes and an overstuffed backpack (for an idea of what to bring on your first trip, check out Travelling RTW: How to Pack). So where is a newbie indie traveller to start?

These are terrific destinations for first-timers. Less expensive than Western Europe, they offer a multitude of nature- and adrenaline-based adventures, and they speak English.

The Kiwi Experience is a legendary New Zealand hop-on, hop-off bus tour that makes for an easy way to hit the highlights while meeting other backpackers. The Oz Experience is the Australian equivalent, although many travellers opt for Greyhound buses instead as distances are greater in Australia than in New Zealand, and people therefore spend longer in each spot.

Australia and New Zealand are also excellent places for those interested in year-long Working Holiday Visas (remember, you have to obtain your visa before you leave home).

For history and culture buffs who are more interested in the architecture of a bridge than in bungee jumping off of it, Western Europe is an ideal destination. It offers a near-overabundance of towering castles, breathtaking cathedrals, Roman ruins, exquisite museums and WW2 landmarks—as well as modern galleries, boutique shops and trendy cafes. English is ubiquitous and there is a strong tourist infrastructure.

As there is so much to see and do, and as the euros and pounds add up quickly, extensive planning is essential to making the most of your time. Additionally, it is crucial to research the background of the famed sights you intend to visit so you appreciate the significance of what you encounter. Eurail passes are an excellent way to get around and tip-based walking tours are the best bang for your buck when it comes to seeing the cities.

Don’t Miss: Edinburgh, Scotland, which is allegedly the most haunted city in the world.

Thailand and the Banana Pancake Loop

Thailand is criticized by some backpackers for having “lost its authenticity” by catering to cocktail bucket-toting, Chang singlet-wearing flashpackers and bropackers who have come solely to test their flaming skipping rope skills during Koh Phangan’s notorious Full Moon Party. Yet while some snub their noses at the hedonistic atmosphere of Khao San Road, others fall sunglasses over flip-flop in love with it. 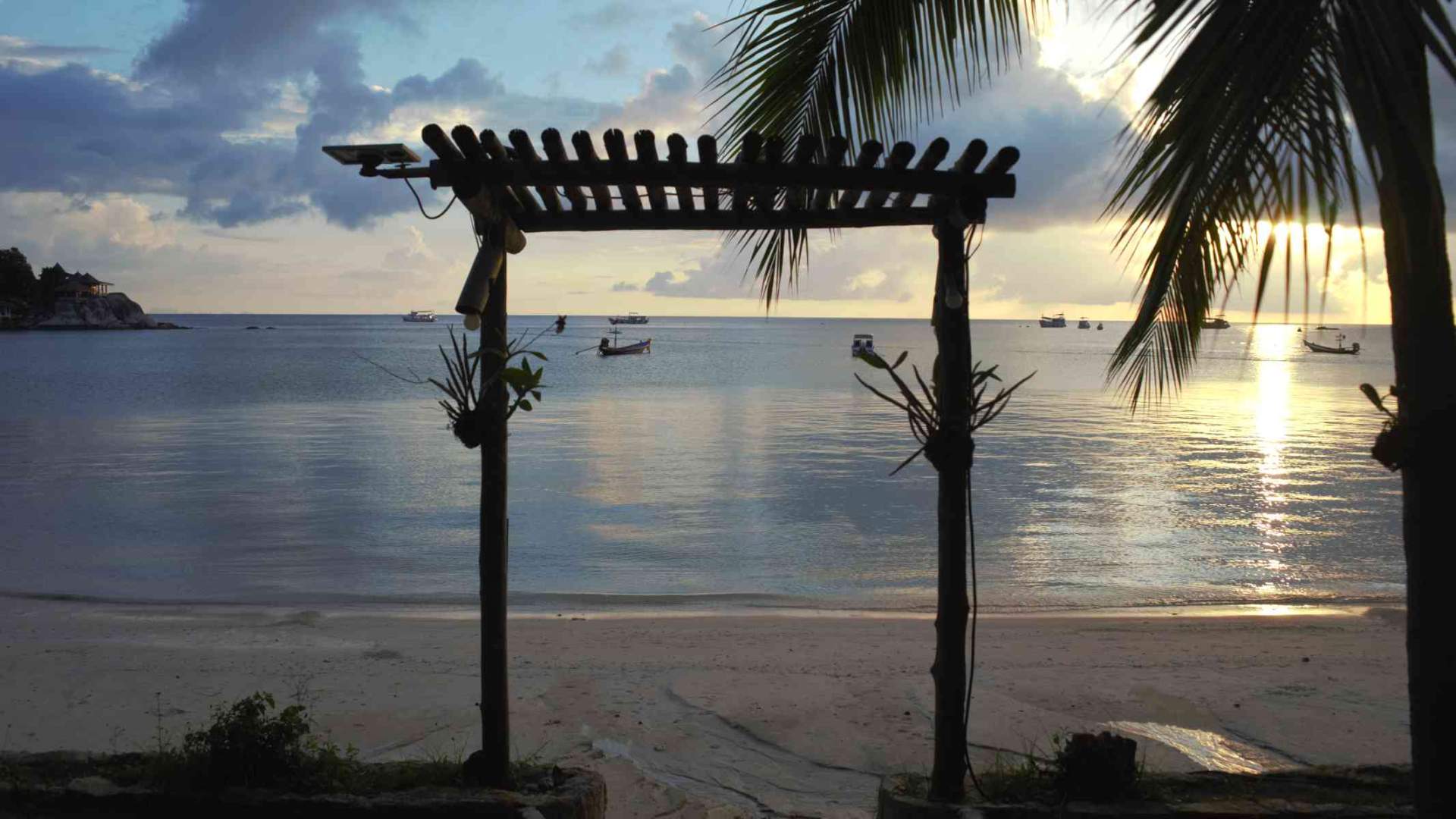 The sun setting magnificently on the Gulf of Thailand, view from a Ko Tao beach. (Outpost/Michael Fraiman)

Even if you’re not one for partying until sunrise, Thailand boasts a plethora of cultural and natural wonders at which to marvel. Also, it’s quite affordable for Westerners.

Thailand’s backpacker infrastructure rivals that of Europe and it is extremely simple to book buses and find guesthouses (although you are more likely to get ripped off so don’t be afraid to shop around). While English is not as widespread as in Europe, those working in the tourist industry have at least a transactional knowledge of the language—and hey, here is your chance to learn a couple of key phrases!

From Thailand, it is easy to cross into neighbouring Cambodia, Laos and Vietnam, thus following the “banana pancake route” (named as such for the ubiquitous breakfast offered by most restaurants and cafes).

Don’t Miss: the Grand Palace in Bangkok. (But note: there is a popular scam wherein individuals with official-looking badges lurk outside of the Grand Palace and tell tourists it’s closed, then offer to take them to a faraway sight for a high price.)

Keep in mind these destinations are merely suggestions. Even if you’ve never ventured beyond your home province or territory, if there is somewhere that you’ve always dreamed of going, then do your research and go. All backpackers experience a learning curve, the steepness of which is determined by how different that place is from home. No matter where you go, you’ll be faced with challenges, both anticipated and not—and you’ll inevitably figure it out on the fly.

Before you know it, you too will be a sage nomad, fondly remembering your days as a newbie indie traveller.

The Iron Road | Scaling the Dolomites via Via Ferratas

Adrift on the Continent in Berlin | Europe’s Capital of Cool

Best Destinations for Newbie Indie Travelers
One nearly perfect destination for newbie indie travelers is Cathar Castle Country in south-eastern France. There are several dozen high-on-top-of-hills medieval fortifications all within the relatively small triangle formed by Perpignan, Carcassonne (la Cité), and Andorra. Many of these historic military gems are in excellent condition and all are fun to explore. Some of them have been fortified since Roman times (e.g. Quéribus). The locals are friendly, the food and wine are excellent, and the region is much less expensive to visit than Paris or Provence. Here’s a link to get you started.
http://www.catharcastles.info/