Tokyo is one of the world’s great culinary destinations, but travellers need to go beyond the obvious to really taste its spark.

Tokyo is one of the world’s great food cities, but visitors who don’t look beyond the obvious are only scratching the surface. Tourists tend to focus on what they think of as traditional Japanese cuisine, from multi-course kaiseki ryori feasts to revolving sushi. But there’s so much more to dining out in this exciting city — and eating well is surprisingly affordable.

When it comes to food, the concept of tradition has hazy boundaries. As with technology and culture, Japan has also assimilated dishes from the West and transformed them into something new. The name for this broad category is yoshoku.

Developed in the Meiji period as the country opened up to the world, yoshoku encompasses Japanese interpretations of typical Western cuisine, including daily staples like curry rice, hayashi rice (a rich saucy dish made with hashed beef), and every child’s favourite, omuraisu (“omelette rice,” a fluffy omelette served draped over ketchup-flavoured rice). 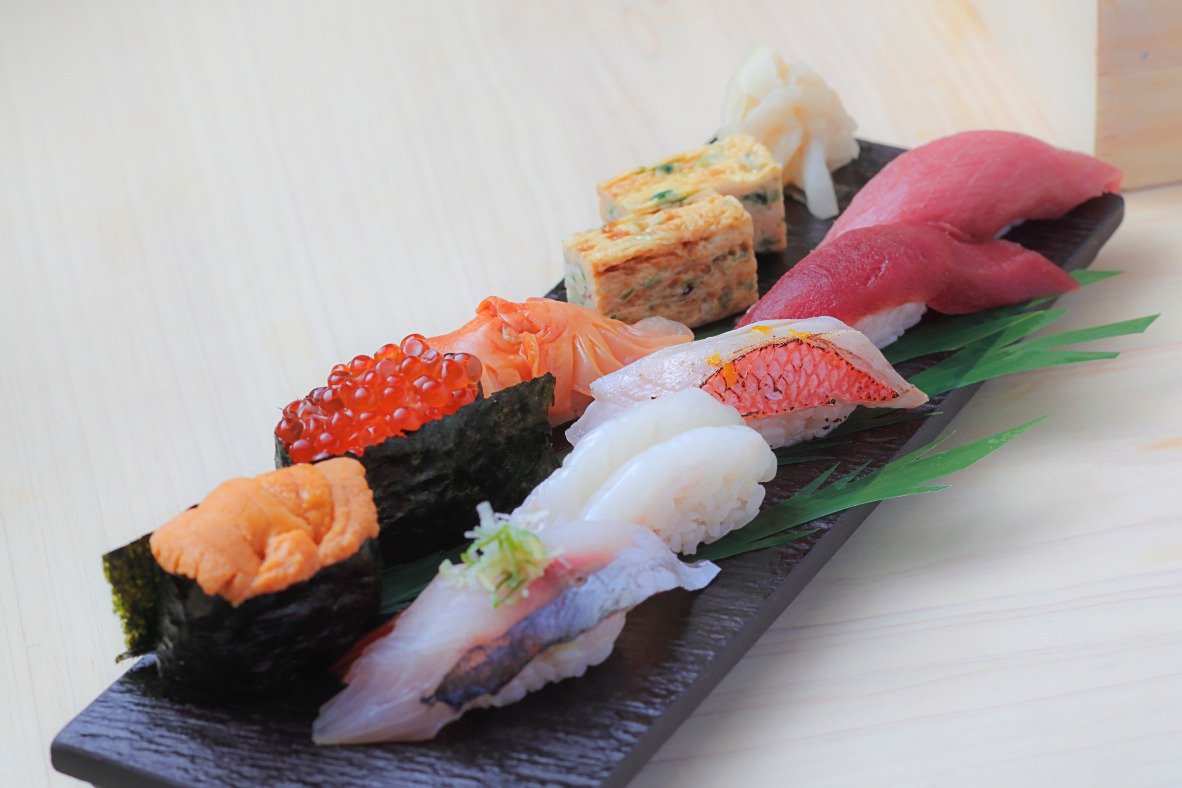 Is Tokyo is the best place in the world to eat sushi? (©TCVB)

But don’t let the term “curry” give you too many preconceptions. Japanese curry is a genre all its own. Not spicy like a mouth-burning Indian curry, or coconut-based like Thai curries, the umami-packed Japanese version can be had on a budget, or in interesting variations, such as Meiji-style curry rice prepared the way it was enjoyed in the late 1900s. It’s the perfect cool weather comfort food.

You’ll also encounter Japanese interpretations of Italian staples like pizza and pasta. If the idea of eating Scallop Butter Soy Sauce Pizza gets your mouth watering, then you’re in the right place.

Or why not order two and share with a friend? You can’t go wrong with Chashu Pork Pizza (topped with that same chunky barbecue pork you find in a bowl of ramen), and Squid Ink Pizza. 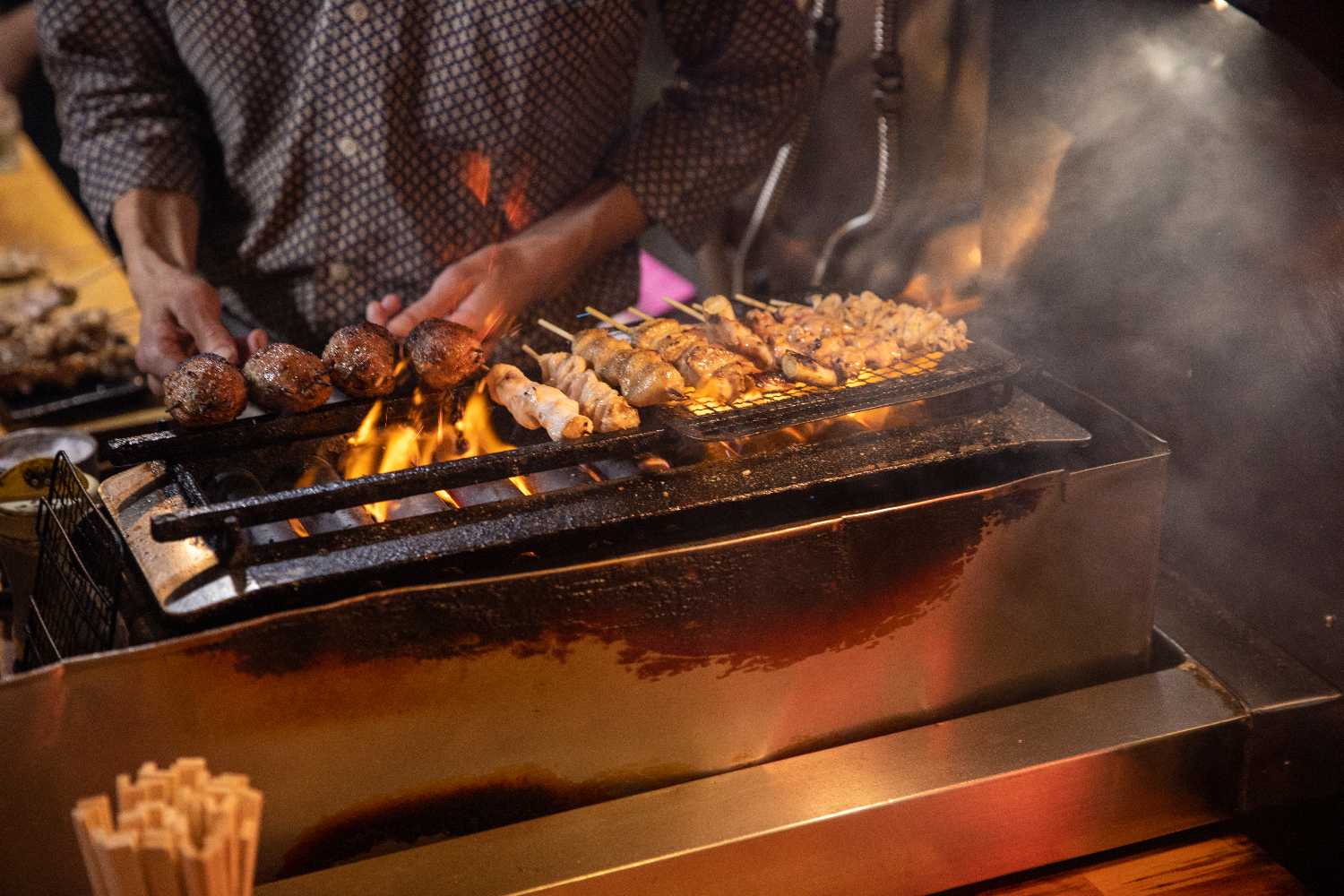 When it comes to pasta, Japanese chefs are equally inventive. Expect lots of seafood variations featuring ingredients like mentaiko ((marinated cod roe), uni (sea urchin), and hijiki (a type of seaweed). I’ll never forget the first time I ate pasta in Japan. I was living in Tachikawa, in Tokyo’s western suburbs. We wandered into the food floor of Takashimaya (a large department store) late one Saturday night in search of something different to eat — and different is exactly what I got.

I ordered the spaghetti with octopus, which, given my love of all things tentacled, is always a safe choice. I was expecting delicious slices of seafood tossed with my pasta in a light sauce, and I wasn’t wrong about that — but there was also an entire small octopus sitting upright on top.

If you’re craving something more typically traditional but want to stick to noodles, don’t worry, that’s an entire world of its own. There’s a type of noodle for every occasion. A steaming bowl of udon will warm your winter-chilled bones in January, while soba (buckwheat noodles) served cold and dipped in tsuyu (a soy-based sauce) will provide relief from intense August heat. And if you’re recovering from a late night on the town, a nice salty bowl of ramen is the perfect hangover cure.

If you’d like to try typical comfort foods beloved of Japanese people, look for a teishoku restaurant. These “set meal” places serve cheap, homecooked-style dishes. A typical set includes miso soup, a bowl of steamed white rice, pickled vegetables, and a grilled or broiled fish. It’s cheap and healthy, and it’s the sort of everyday food you’d expect to see in a Tokyo resident’s home. 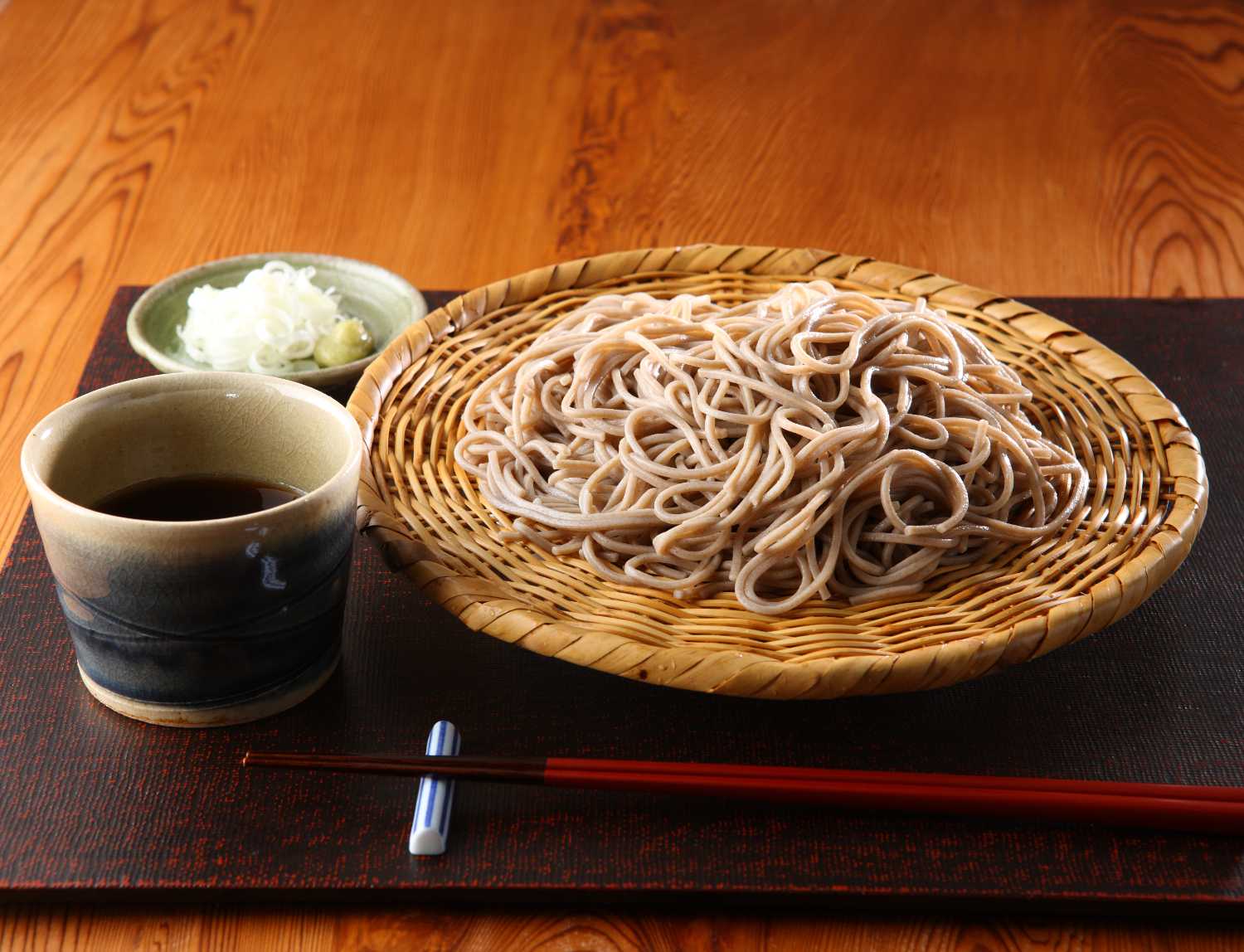 Speaking of residents, don’t overlook other Asian cuisines while you’re there. Tokyo has a strong expat community, and you’ll find restaurants with regional cuisine as good as anything you can get by travelling to those countries. Start with a visit to Tokyo’s “Korea town” at Shin-Okubo.

The neighbourhood is a mecca for K-Pop fans, and you’ll find shops selling posters, stickers and other memorabilia of the latest Korean idols. You might even see new up and coming bands posing for photos. Last time I was there, we watched a Korean boy band walking up and down the street as phone cameras flashed and a trail of excited young girls followed cheering behind them.

If chasing carefully made up young men with elaborate hairstyles isn’t your thing, don’t worry, there are plenty of other distractions to enjoy in Okubo. I was standing off to the side chewing on deep-fried cheese strings (“cheese hotdog” in Japanese), one of the typical Korean street-food delicacies you’ll find in this colourful neighbourhood.

When you’re finished feasting on spicy Korean bibimbap and yakiniku grilled right at your table, walk off your meal with a stroll through the backstreets. Your wanderings may take you a couple blocks off the main strip of Okubo-dori, where a small park surrounded by two-storey houses commemorates the Greek-Irish writer who did so much to bring Japanese customs to a wider world. 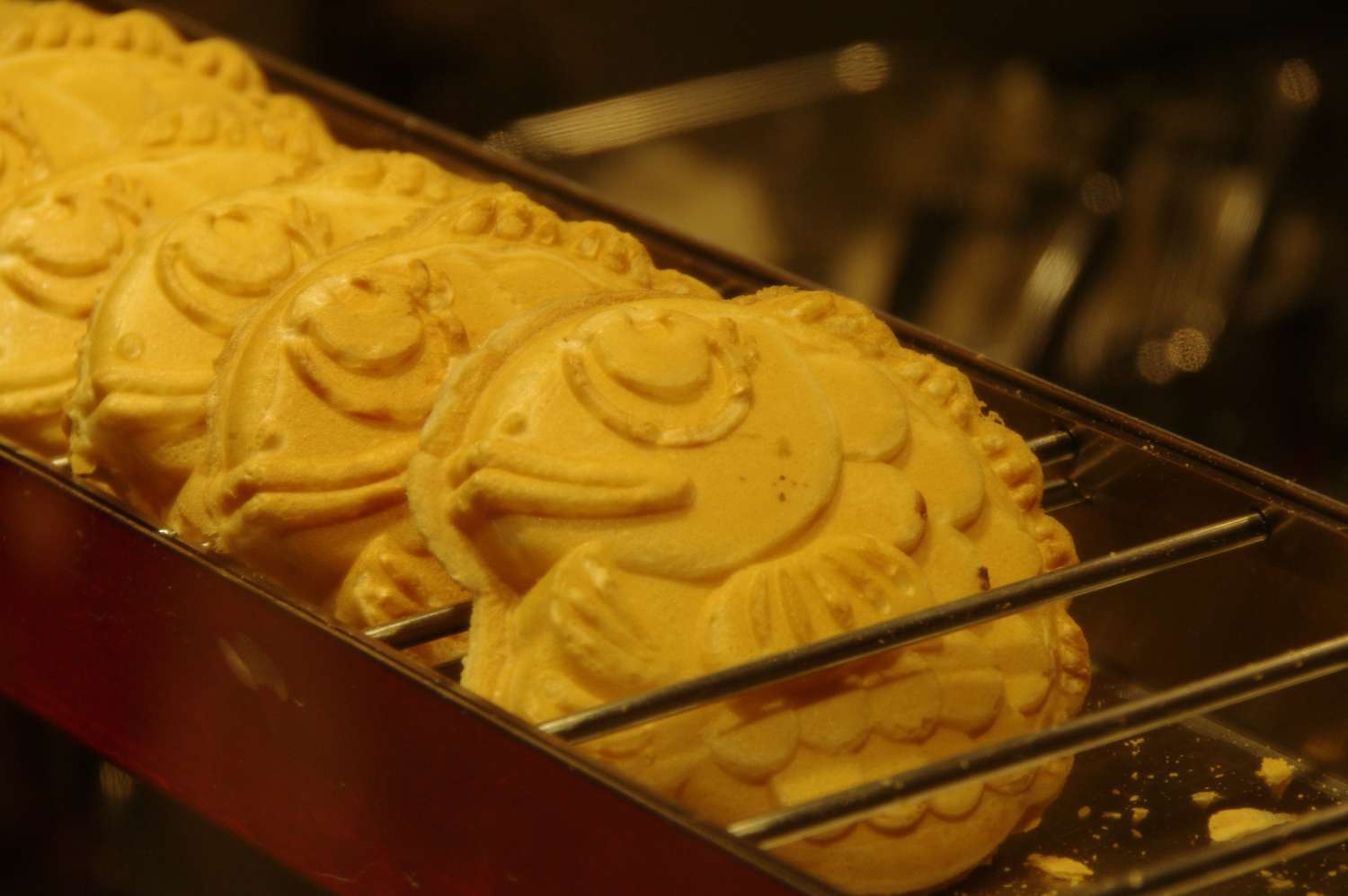 Best eaten off the grill, taiyaki are tiny cakes filled with a red-bean paste. (©Yasufumi Nishi/©JNTO)

Lafcadio Hearn — or Koizumi Yakumo, as he was known in Japanese — moved to Tokyo at the end of the 19th century and wrote more than a dozen books on the country, often about folktales and traditional ghost stories. He held his last teaching post at nearby Waseda University, and died in a house near this little park.

Finally, be sure to try a few typical Japanese sweets. They aren’t loaded with sugar or chocolate, like the typical Western cake or pie.

Instead, they use ingredients like azuki beans and mochi (glutinous rice cake) to create subtle flavours and textures that are totally addictive. I recommend starting with taiyaki, a crisp baked fish-shaped cake filled with sweet red-bean paste. If you’re near the neighbourhood of Azabu-Juban, pop by Naniwa (est. 1909). It’s said to be the original maker of these traditional treats, and you can get them hot off the grill.

My other favourite Japanese sweet is yatsuhashi: thin, triangle-shaped soft mochi wrappers filled with pureed red-bean paste. They’re a popular souvenir from Kyoto, but you can also find them in Tokyo.

You can eat exceptionally well anywhere in Tokyo, but if you’re looking for somewhere to start, why not try Shimbashi? It’s the perfect place to immerse yourself in the everyday rhythms of the city. This is my favourite neighbourhood for no-frills after-work eats. You’ll find people leaning against stand-up bars (tachinomi) below the railway line after work, and eating at tiny ramen stalls and yakiniku (grilled-meat skewers) stands.

The maze of streets between Shimbashi and Yurakocho stations are filled with restaurant possibilities, from busy sushi spots to typical izakaya (casual drinking establishments with private booths, where draft beer is served along with a vast assortment of small dishes). 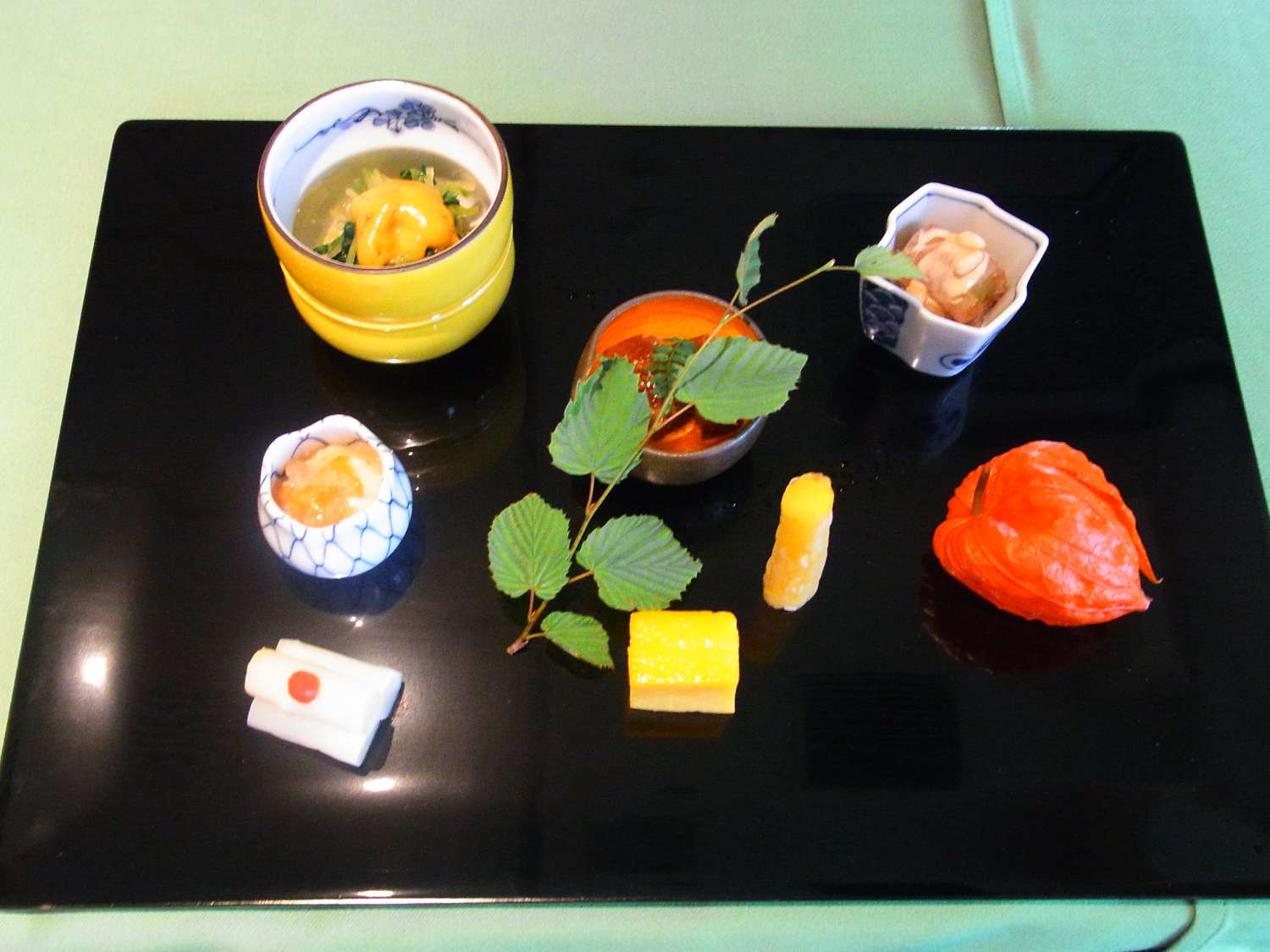 If a day of exploring has left you desperate for food but the after-work office crowd isn’t your scene, check out the restaurant floor of most department stores. You’ll find a good selection of casual restaurants, from Japanese to international cuisine. Look for the floor guide in the lobby, it’ll give you a list of all the restaurants you’ll find up above.

Finally, if you’re traveling on a budget, don’t turn up your nose at the humble depachika — the department store’s basement floor. They sell a wide range of prepared foods in small containers. It’s the perfect place to grab good healthy food to take home if you’re staying in a rental flat. You’ll find main dishes like grilled fish or meat, different types of rice (white rice, genmai, or rice with red beans), and lots of vegetables from pickled daikon and seaweed to veggie tempura. The food is always fresh, and if you go near closing time, it’s also very cheap. ♦