Breaking Down the History of Budapest | Hungary’s Stunning Capital

When heading home to Italy from where you live in Istanbul by way of Budapest is the cheapest way to go, you have to count your blessings.

It’s only a few days til Christmas and I’m going to Italy to spend the holidays with my family. The cheapest flight from Istanbul to Bari, my hometown, was via Budapest.

So here I am, in Hungary’s capital, a city that I longed to visit. Besides, an old friend of mine, Giuliano, lives here and I can’t wait to meet him again after so many years.

Giuliano’s apartment is in Pest, which is widely considered to be the centre and the modern part of the city. In times past Buda and Pest used to be two different cities divided by the Danube: in Buda, on the western shore, it served as the residence of the Hungarian monarchy; whereas Pest, on the opposite shore was an important trade post. Only in recent times (1873), following the construction of the Chain Bridge (1849), the towns of Buda, Pest and Óbuda came together forming a single entity. 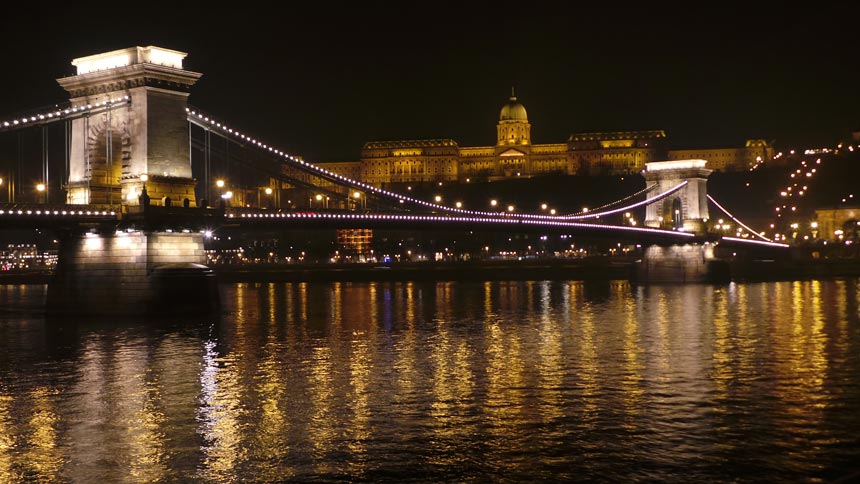 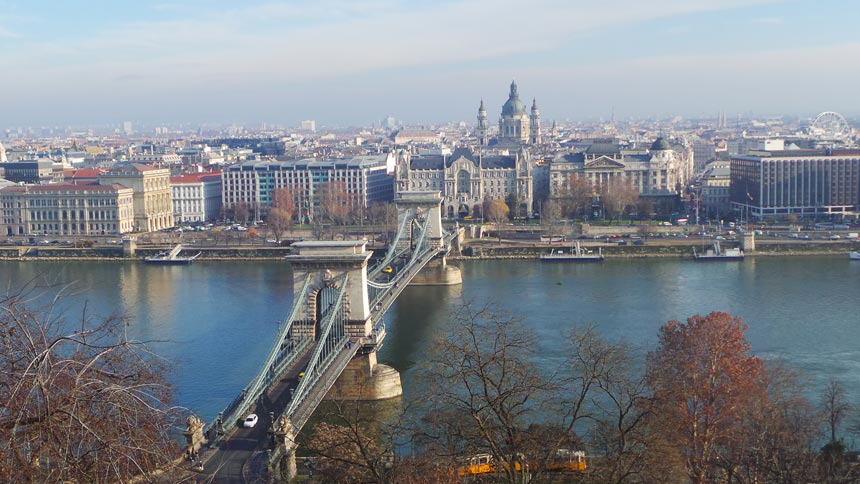 The view across the river.

After giving me a warm welcome, Giuliano gives me an introduction to the city, pointing out on the map, districts, streets and attractions. Unfortunately he’s a bit sick and he’ll be working during the next two days, so I’ll have to explore the city on my own. Me and Budapest alone, a romantic date. It doesn’t take long before I’m completely seduced.

For an architecture lover this city, with all its extraordinary examples of architectural styles (Baroque, Art-Nouveau, Eclectic, Gothic, Neo-classical), is a true paradise. I can’t help but walk around with my chin up, admiring the beautiful buildings that line the wide boulevards. Just a few minutes after I’ve left, I come across a huge building with two onion-domed towers. It’s the Great Synagogue, the largest in Europe, built in Moorish style in 1859 for the once prosperous Jewish community. 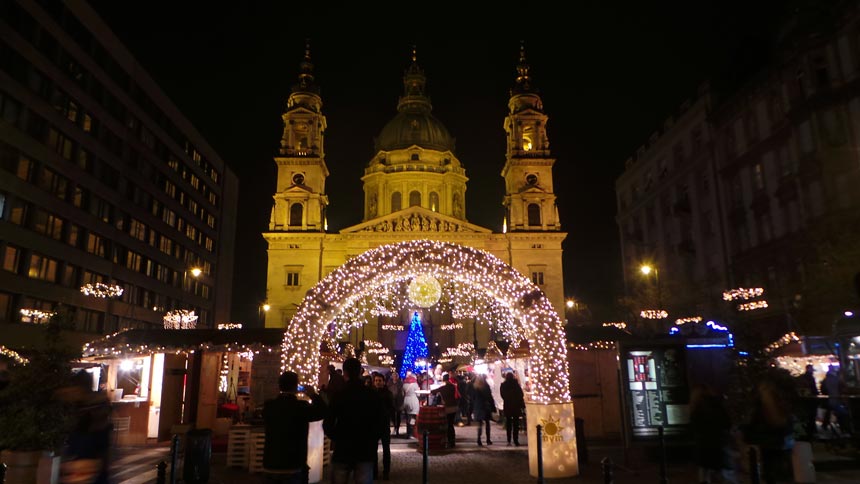 In this period of the year, the streets and the squares of the center are lit by illuminations and host several Christmas markets, like those I find in Vörösmarty Square and next to the St. Stephen’s Basilica. Locals and tourists flock the stands where the staff, dressed in traditional clothes sell souvenirs, sweets, handicrafts and any kind of traditional food and products. Living in Istanbul, I’d really missed the Christmas atmosphere. I can’t miss the chance to taste some Mangalica meat (a breed of pigs native to Hungary), some goulash of course, followed by a glass of mulled wine to warm me up. A 3D light show is being projected on the majestic neoclassical facade of the Basilica, Budapest’s most imposing church.

In a few minutes I reach the riverfront. The crowds of the Christmas market have vanished and I can enjoy the view of the Danube in splendid solitude, enraptured by the tremulous lights reflected in the dark water. For an instant, the white lights of the Chain Bridge seem to me like the sparkling necklace of a queen, and the Buda Castle sat atop the hill her crown. While crossing the imposing bridge, I’m faced with stunning glimpses of the Danube, the castle and the magnificent neo-Gothic Parliament. I wished to continue my stroll but it’s quite late. Anyway, the first date was a complete success. 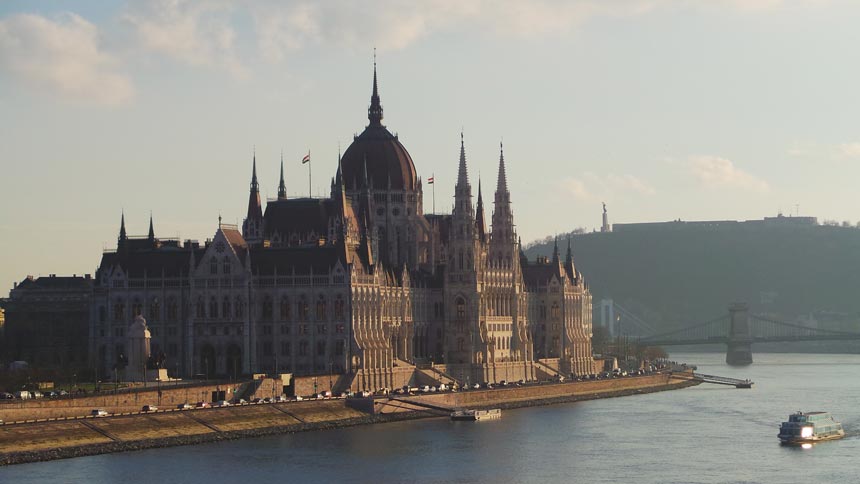 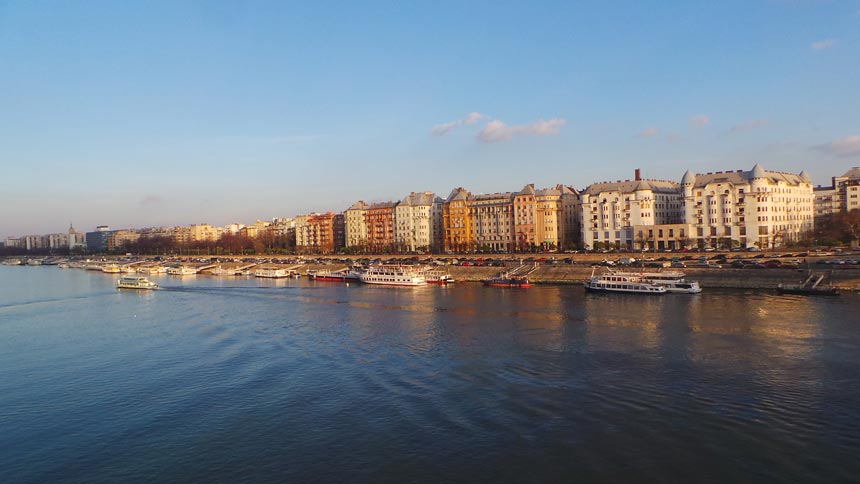 The next morning Giuliano has to leave early, and I do the same so that I have the whole day to wander around. After a quick breakfast with kürtöskalács, a spiral-shaped pastry, I set out for Buda Hill. The old city of Buda developed around the castle, also referred to as the Royal Palace. This huge 800 year-old complex—founded in the 13th century and rebuilt in neo-baroque style in the 18th century—houses the National Gallery and the History Museum. I don’t have time to visit the museums, but at least I can enjoy the fantastic view over the Chain Bridge, the Danube and Pest. 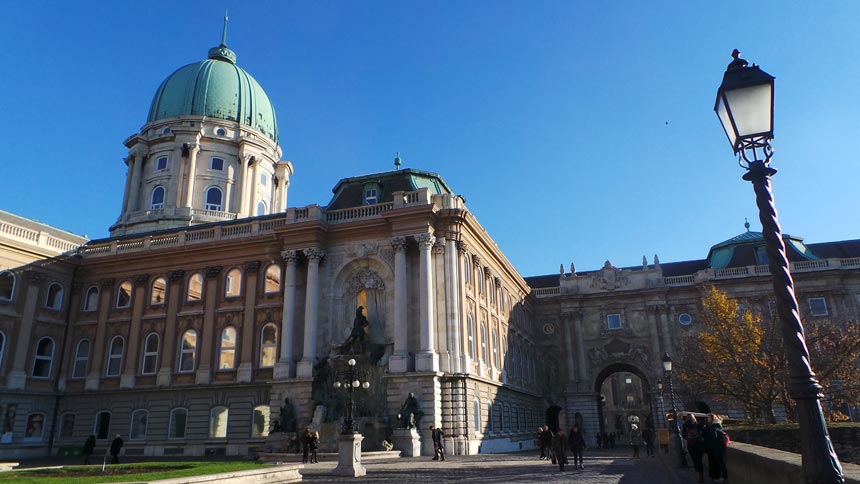 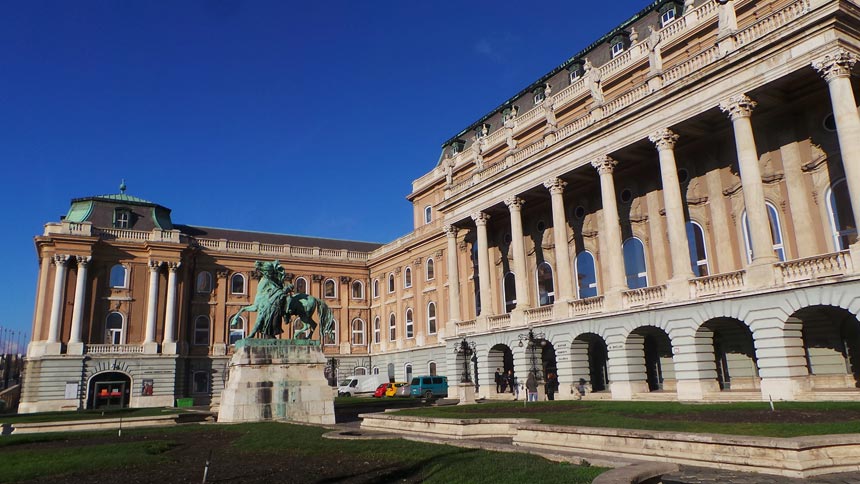 The other main attractions of Buda Hill are Sandor Palace (the residence of the Hungarian president) and above all Fishermen’s Bastion and Matthias Church, both located in Holy Trinity Square. Rather than a real fortress, the former is a beautiful terrace with towers and balconies, offering yet another lookout point; while the nearby Matthias Church is a splendid neo-gothic building featuring fine stained glass windows and medieval interiors. A bit further from Buda Hill is the Citadel of Gellért Hill, a fortress with commanding views of the city. 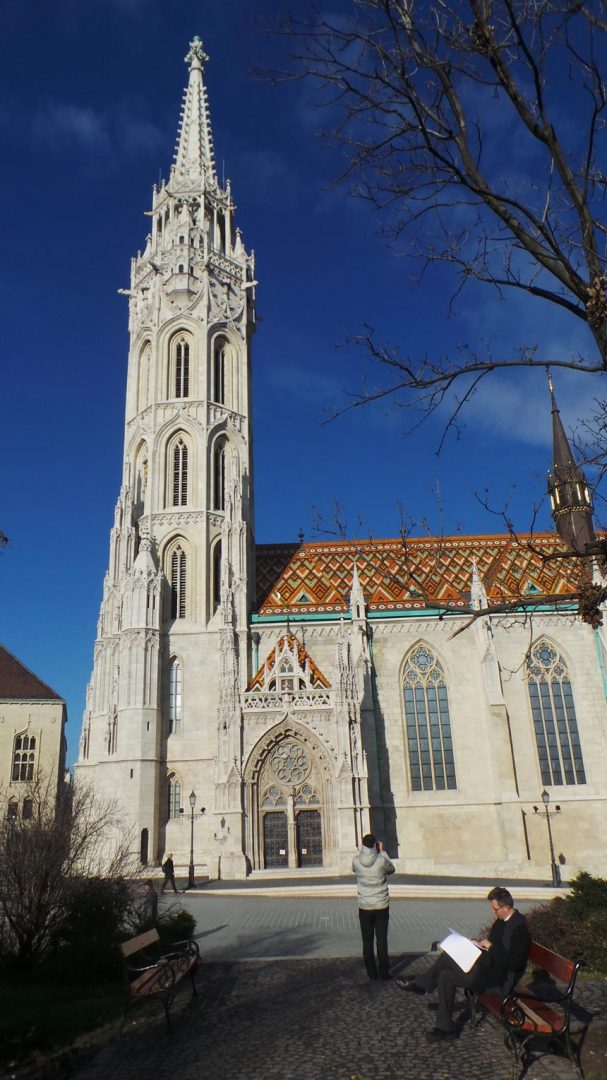 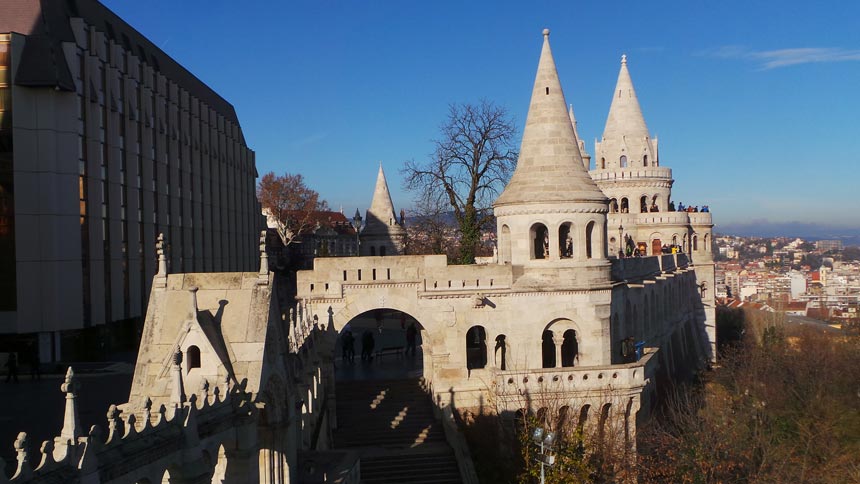 Once back to Pest, following Giuliano’s advice, I have lunch at the Central Market, a gigantic covered market, dating back to the 19th century. After lunch, I still have some energy left to walk a stretch of Andrássy Avenue—the Hungarian version of Paris’ Champs-Elysees—along which are found some of the best shops and finest buildings of Budapest, such as the Hungarian State Opera House. In the evening, before getting back home and collapsing on the sofa, I decide to venture in the back-alleys of the Grand Synagogue, in the Jewish district, willing to check out some ruin pubs I have read about in the travel guide. Ruin pubs are basically pubs furnished and decorated using recycled material in a creative, artistic way. The outcome is a hybrid between an antique store, an art gallery and a German beer garden. 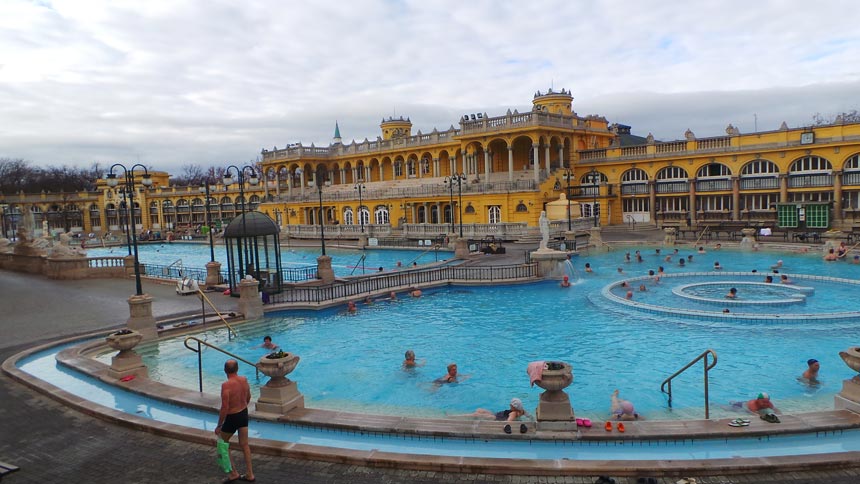 My last 12 hours in Budapest. On my list are still a lot of to-do-things. At 8 a.m. I am already in front of the Parliament Building. In order to visit it, you have to make a reservation online, but the entrance is free for EU citizens. With its countless spires reaching out for the sky and its huge dome, it resembles a Gothic Cathedral. Marvelous from outside, the parliament is equally as impressive inside. Hundreds of rooms decorated in the most lavish way: frescoes, paintings, carpets, pieces of furniture, statues, staircases and well over 40 kg of gold covering the walls! These premises are also home to the Holy Crown of Hungary, used for centuries by the kings of Hungary. 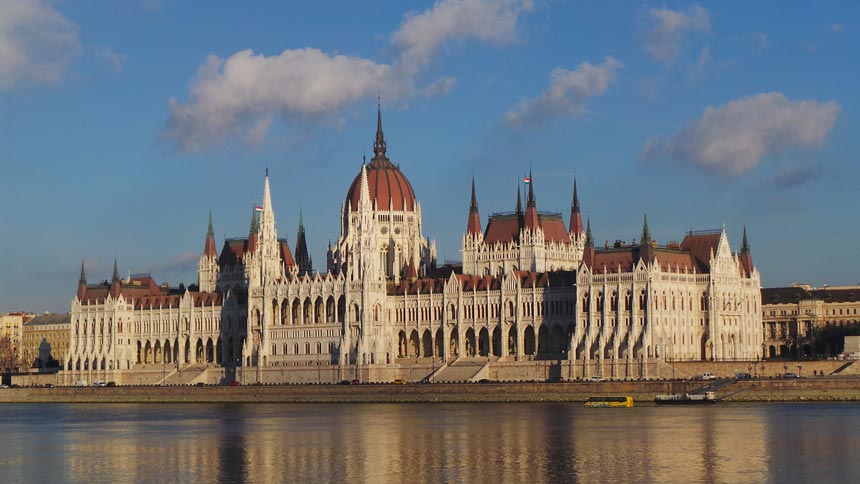 By taking the metro (the second oldest in the world), in a mere 15 minutes I’m at Heroes’ Square, a vast open space dominated by a monument representing the Archangel Gabriel and the seven chieftains of the Magyars who settled in the current territory of Hungary. Behind the square lies the City Park, a huge green area comprising gardens, a zoo, an ice-skating ring, an amusement park and even a castle. 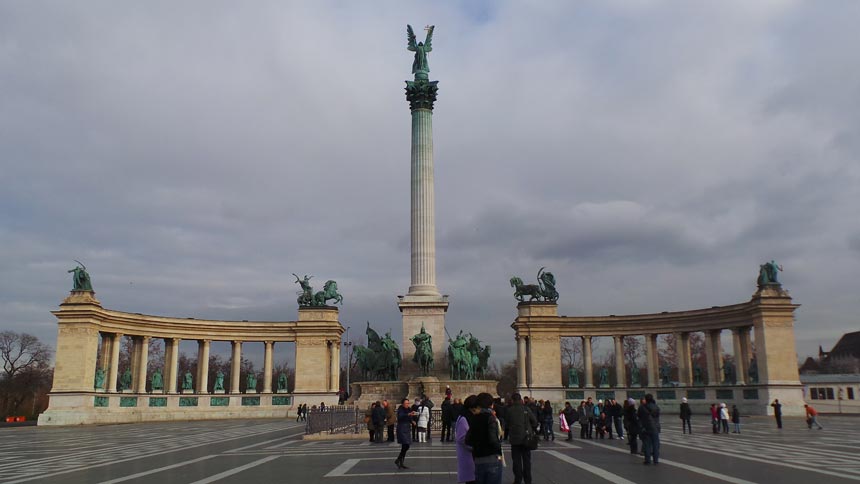 Actually Vajdahunyad Castle is not one but three castles rolled into one. It was built in 1896 as a replica to synthetize the three main styles of Hungarian architecture: Gothic, Romanesque and Baroque. The area of the City Park hosts also the Szechenyi Baths, the oldest and arguably the most beautiful among Budapest’s thermal baths. Relaxing in the warm water in the outdoor pools, surrounded by statues, fountains and neo-baroque architecture, while local gentlemen play chess, is an experience not to be missed. Surely the best way to bid farewell to Budapest, a gem of a city in the heart of Mitteleuropa. 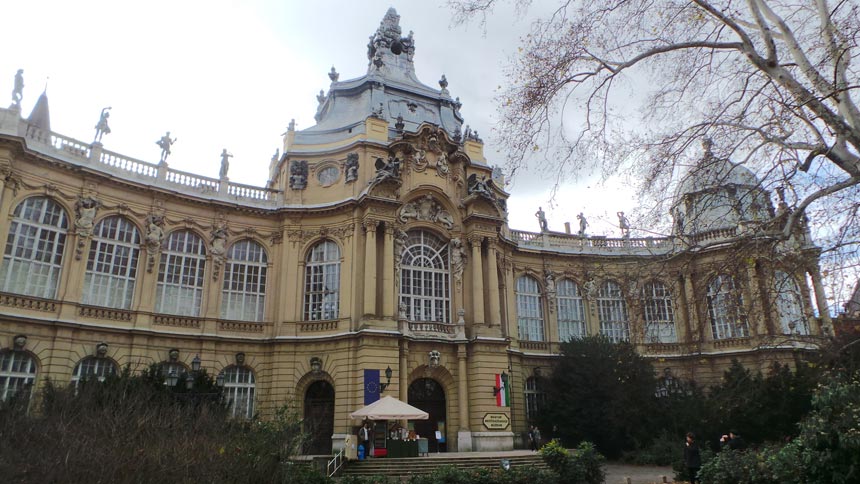 Creepiest Places in the World | Part 1