So let’s get to it. But what about registering for residency? This is where things can get complicated. But I’ll give you sense of how it worked for me.

In my last article we talked about the physical process of moving abroad. And we looked at the “how to” of finding apartments and shipping your belongings.

I promised to talk about bureaucracy in this article—specifically the dreaded government paperwork. So let’s get to it. Physically relocating is simple enough. But what about registering for residency?

This is where things can get complicated. You’ll have to check the regulations of the country where you want to relocate. But I’ll give you a sense of how it worked—or barely worked—for me.

I’m a European Union citizen, and so I’m able to live anywhere in the EU. My wife can also accompany me as a non-EU dependent. And if we had kids, they’d be eligible too. 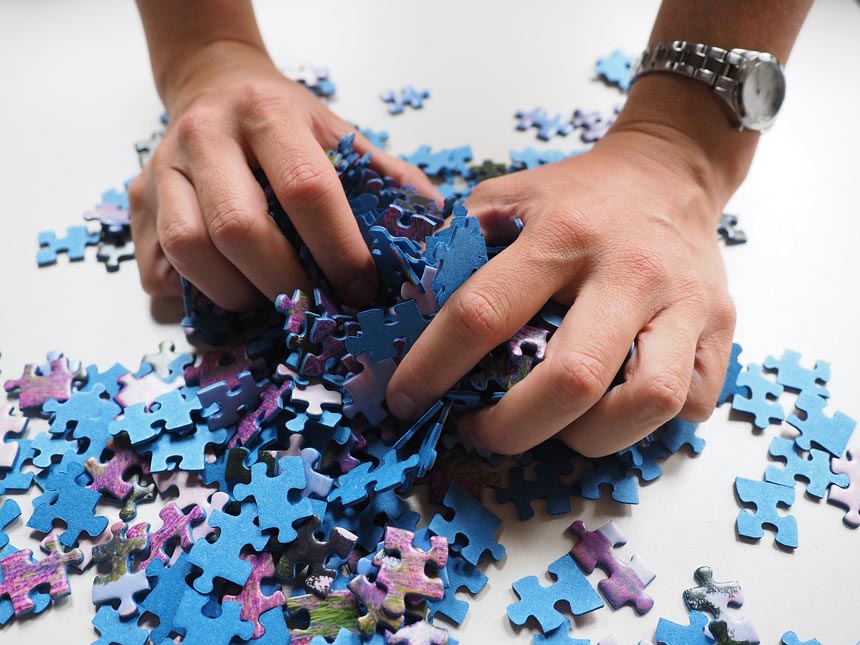 Getting expat residency: like putting together pieces of puzzle! (Hans Braxmeier-Pixabay)

If this also applies to you, you can get all the details from the European Union’s Freedom of Movement guide.

In order to set that process in motion, I simply had to enter Malta as a tourist, and then report to the foreigner office within 3 months to apply for a Residency Permit.

There are many categories of residency to choose from, whether you’re working locally, opening a company, self-employed, or independently wealthy. I’ve got residency status as a “self-sufficient person”. This means I don’t work locally, and I have enough money to support myself without collecting assistance.

EU folks who are moving from another EU country—like British retirees here in Malta, for example—are able to use the Maltese national healthcare system because they paid into their own national system in the UK. I’m pretty sure all EU countries have those reciprocal health care agreements. That’s something you’ll need to look into for your country.

But if you’re coming from a non-EU country like we did, you will likely need private health insurance. This is very easy to arrange locally. We use a company called Atlas, and it costs around €900/year for two of us.

All this stuff sounds very straightforward on paper, and there really aren’t that many documents to collect. But in Malta you always have to allow for the Mediterranean Factor…

I did a lot of advanced research by reading threads on British expat forums. I heard that the foreigner’s office in Valletta is chaotic, and the lines are long. And so we got up very early one morning and fought rush hour traffic to be the first in the door.

Apart from the unbelievable amount of time it took to drive a few traffic choked kilometres, all seemed to be going quite well, until we approached the building in question.

“That doesn’t look good…” I said to my wife, nodding my head at the door.

“There’s a man standing next to the entryway shrugging.”

“Is this the foreigner office?” I asked him when we approached.

I was confused. “But it says on your website that you’re open from 8:30 to noon, Monday to Thursday.”

“Yes, but we had a backlog of work, so we decided to close on Wednesdays.”

I had to let that sink in for a moment.

“Let me get this straight…” I said. “You have too much work to do, and so you decided to take an extra day off…”

“Yes!” he said, shrugging again, as though it were all so obvious. “Come back tomorrow.”

“But we’ve driven all the way here from the south…” I said.

“I took time away from my work…”

They crept higher still. By this time they were up around his ears, and his face wore a pained expression, as though that miserable hour I spent in traffic had hurt him as much as it frustrated me.

“Come back tomorrow…” he said again. And then he shrugged once more and vanished through the doorway.

To cut a very long story short, we did go back again the next day. And we got in the building and up to the right floor. But I still wasn’t prepared for the scene that awaited us.

It looked like a refugee camp after an earthquake. There were people crammed into every corner of the hallway, either dropping off applications or picking up residency permits. There were no signs on the doors, and absolutely no indication of what we were supposed to do. People just barged into random rooms and shouted.

The Shrugging Man was there again too, looking even more pained and apologetic than he did the day before. In watching him, I realized that this man was a specialist, a highly trained empath who was likely hired on the spot when he demonstrated his gift for making people believe he felt sorry for them—all while actually feeling nothing at all.

I eventually figured out a bit of a flow to this chaos, and parked myself next to one of the more active doorways. When someone opened it, I slipped inside and sat down.

And we did eventually receive residence permits, but it took 3 months and a call to someone in a corner office whose name I insisted on getting when we first applied. But that’s another story, and we don’t have time for it now.

Suffice it to say that the paperwork part is pretty easy, but you do need to develop important skills in navigating the Mediterranean, such as Cutting Lines, Stubborn Badgering, and Knowing Who to Push.

It doesn’t hurt to have an inside track with The Shrugging Man, either.

Get Your Australian Working Holiday Visa Before These Tax Changes