How to Buy Black-Market Petrol in Uzbekistan

Rugged travellers may be drawn to drive across the fringes of Uzbekistan, but be warned: don’t do it in a Ford Fiesta.

The streets of Bukhara weave around ancient mosques and crumbling walls of brown clay. You can imagine camels once happily clopping by, pausing for a hearty spit into the gutter, their humps laden with spices en route to the distant west.

But today the camels are gone, the streets are packed with honking cars, your car’s about to run out of gas and there’s not a single working petrol station in the entire country.

That was the situation I found myself in this past August, when a group of Kiwi friends and I attempted to drive two clapped-out old cars from England to Mongolia as part of the Mongol Rally, one of the wildest annual races anywhere in the world. 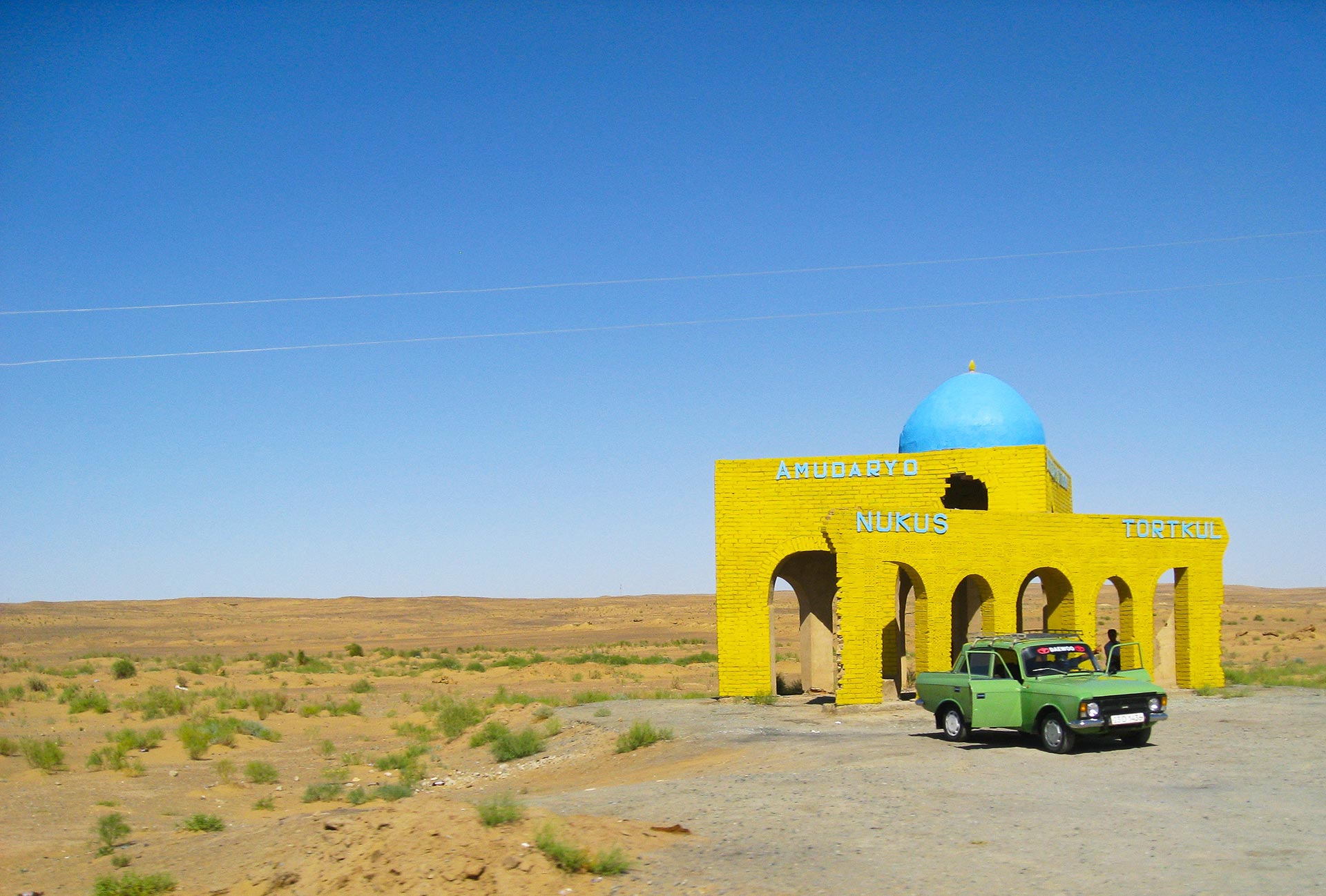 Uzbekistan imports meagre amounts of petrol, the majority of which is channelled into the agriculture industry for their annual cotton harvest. Local cars pretty much all run on propane. But our car wasn’t local. It was a goddam Ford Fiesta, and it ran on good old-fashioned petroleum.

As other Rally participants will tell you, petrol is impossibly cheap throughout most of the Middle East and Central Asia. In Azerbaijan, 17 immaculately dressed attendants will polish every inch of your car as they top you up, practically paying you for the privilege. Iran is even cheaper—just be prepared to set aside an hour for selfies with any local dudes hanging around. But in Uzbekistan, buying petrol is a Homeric endeavor involving, in my case, endless conversations in broken Russian, black plastic bags full of illegally exchanged cash and an impromptu rugby match with a gang of curious kids.

Roads in Turkmenistan suck. Our tires collided with potholes and exploded. Our muffler fell off and was promptly nicked by a local motorcyclist. We ran out of a water, and a translation error (entirely my fault) had us storming out of the only convenience store for miles around.

When we finally crossed into Uzbekistan we were thirsty, and so were the cars. We’d read that buying petrol in Uzbekistan wasn’t easy, and our first few feeble attempts at gas stations confirmed this. It was LPG or nothing. We had to step up our game, which would push my Duolingo Russian to the limit. 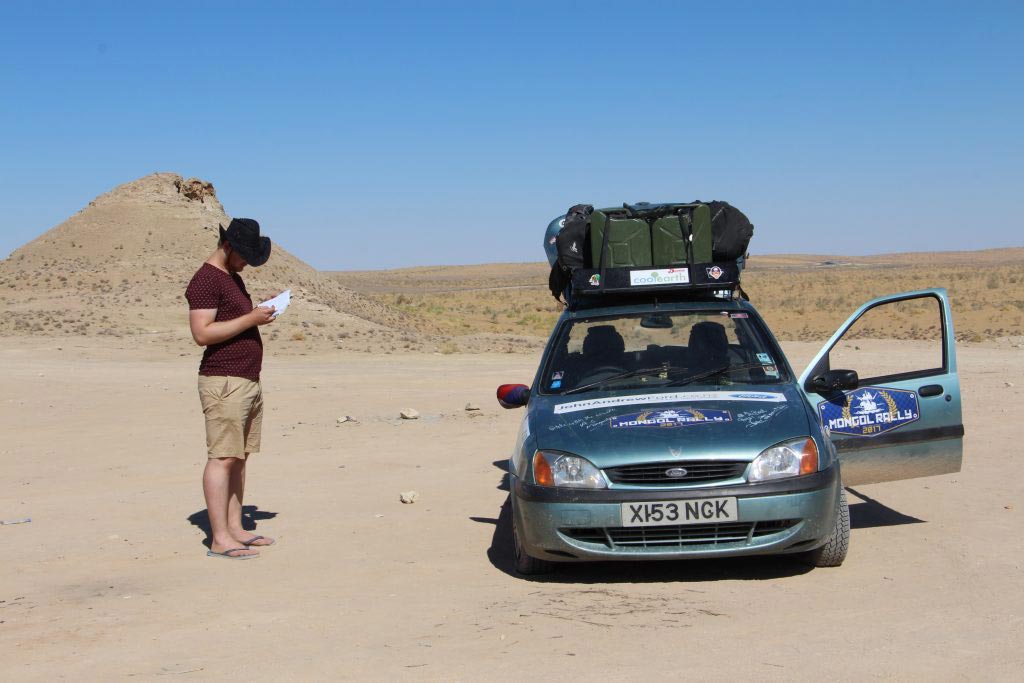 The author with his favourite new car.

At a small convenience store on a side street near the border town of Nukus I asked the cashier, “Do you know where to buy petrol?” At least, I thought that’s what I said—the young man looked slightly scared and shook his head. So instead I asked to change money. Another blank stare. I repeated the memorized Russian phrase, enunciating carefully. He finally seemed to understand.

We changed about $50, and were handed a fist-sized wad of Uzbek som. Walking out the store, the man shouted, “Hey—you need petrol?” I made him repeat it about 11 times before I understood the Russian sentence, but when I got it I responded with an ecstatic yes. “Drive two kilometres up the road, and it’s on the right.”

We were in business.

After two kilometres we found a dodgy looking building. Decrepit mechanic equipment strewn over the ground. Old men smoking idly by the pavement. Impressively clapped-out cars whipped by, belching foul smoke. We knocked on the door. No answer.

I approached the old men and repeated my now well-practiced mantra: “Where can I buy petrol?” Only three repetitions needed this time.

Our cars barely held up the next two kilometres, but we had no choice. This time, instead of old men smoking by the side of the road, young men were industriously puffing away while they lugged bits of scrap iron about a muddy driveway.

“Do you have petrol?” I asked. 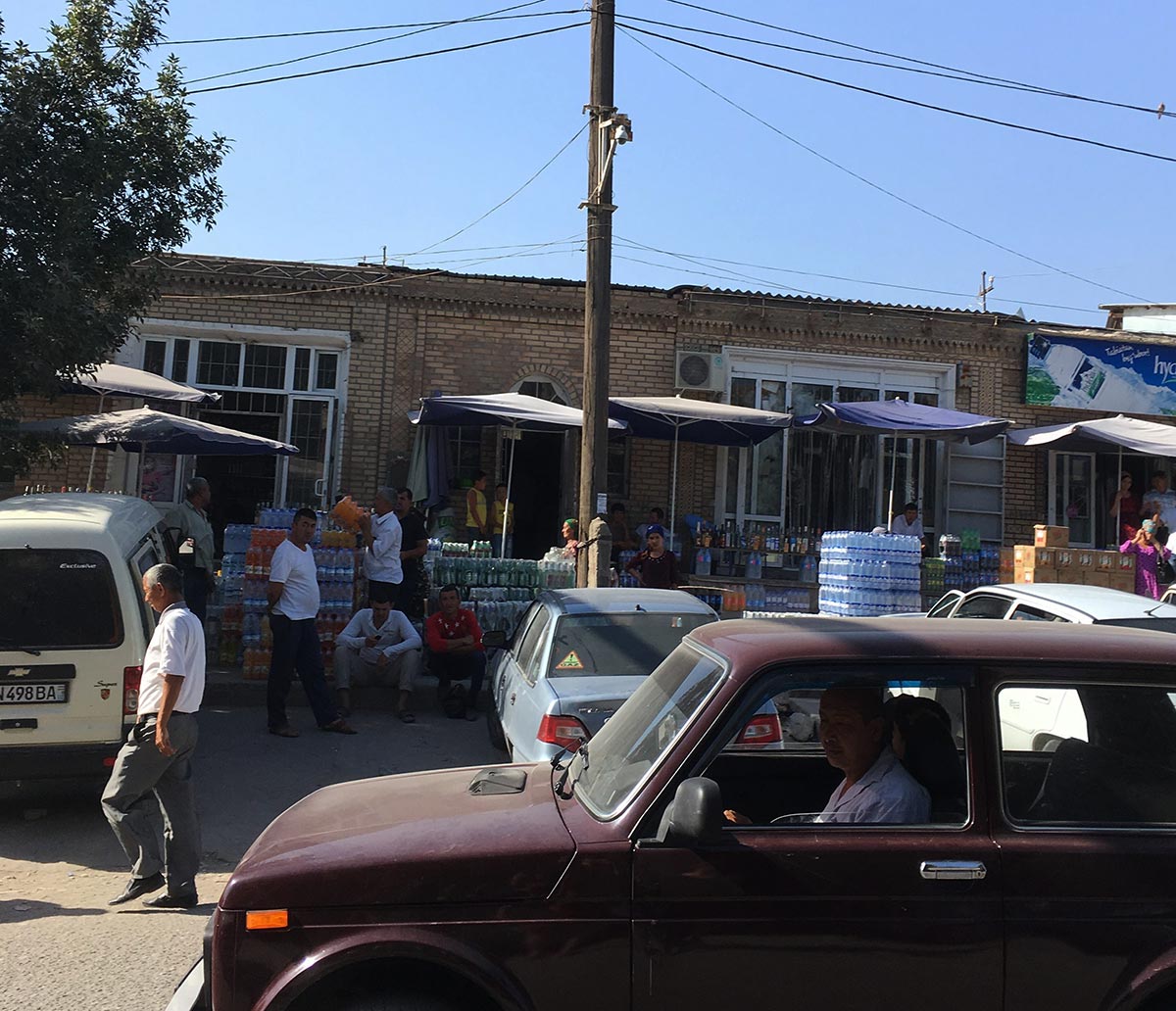 “How much do you need?” one of the men replied.

I told him 50 litres, and he asked us to wait and walked inside. I overheard furious chatter in Uzbek from within the house. He returned and scribbled a figure in the dust on our rear windscreen. It worked out to about 70 cents a litre. Done.

An ancient, battered, rusty canister appeared, and our cars greedily gobbled up the sulphur-reeking liquid. This would get us to Bukhara, a major tourist city where, we assumed, sourcing petrol would be somewhat easier. Turns out we were wrong.

The religious and spiritual capital of Uzbekistan boasts 5,000 years of human history. The imposing, 46.5-metre-high minaret of the Grand Mosque was laid siege to by Genghis Khan. Criminals would be hurled to death from its peak, the splatters of their bodies interrupting the business of this busy silk-road hub. It became known as the Tower of Death.

It would have been nice to visit the monument, and indeed we did—for all of five minutes. We spent the rest of our time in Bukhara trying to fill up our gas tanks.

Our shared room overlooked a leafy courtyard in the guesthouse near the historic centre. Abdulaziz ran the business with his son, Akmal, and his grandson, Akbar, who was almost 11. Abdulaziz wore a large white beard and little else. He turned out to offer a decent exchange rate, so I changed money with our shirtless host; he later overheard that we needed petrol and could help with that too. Akmal and Akbar were summoned, and we were promised an easy petrol score.

Akmal and Akbar hopped in the back of our Ford Fiesta and guided us through the narrow, sclerotic streets. The two looked strikingly similar: short, round-faced, with a certain squint which stopped short of making them seem malicious. We stopped at a park outside the centre, surrounded by monolithic Stalinist apartment blocks. A dog defecated in the scraggy grass, and families ambled through, shooting curious glances at our white faces in this battered, eccentric car.

Leaving his son with us and relieving us of a couple of hundred U.S. dollars in crisp, unfolded notes, Akmal hopped out of the car and strode purposefully into one of the apartments opposite. About 10 minutes later—Akbar sullenly, silently staring all the while—Akmal returned brandishing a black plastic bag filled with freshly exchanged Uzbek currency. (Now I know why they call it the black market…)

Freshly cashed up, it was back on the honking streets, dodging hooligans on motorbikes and madmen in motorcars. We were getting farther out of town. The roads were widening, but we were still turning left and right with mind-spinning frequency: if Akmal were to leave us on the side of the road, we weren’t getting back to our hostel. 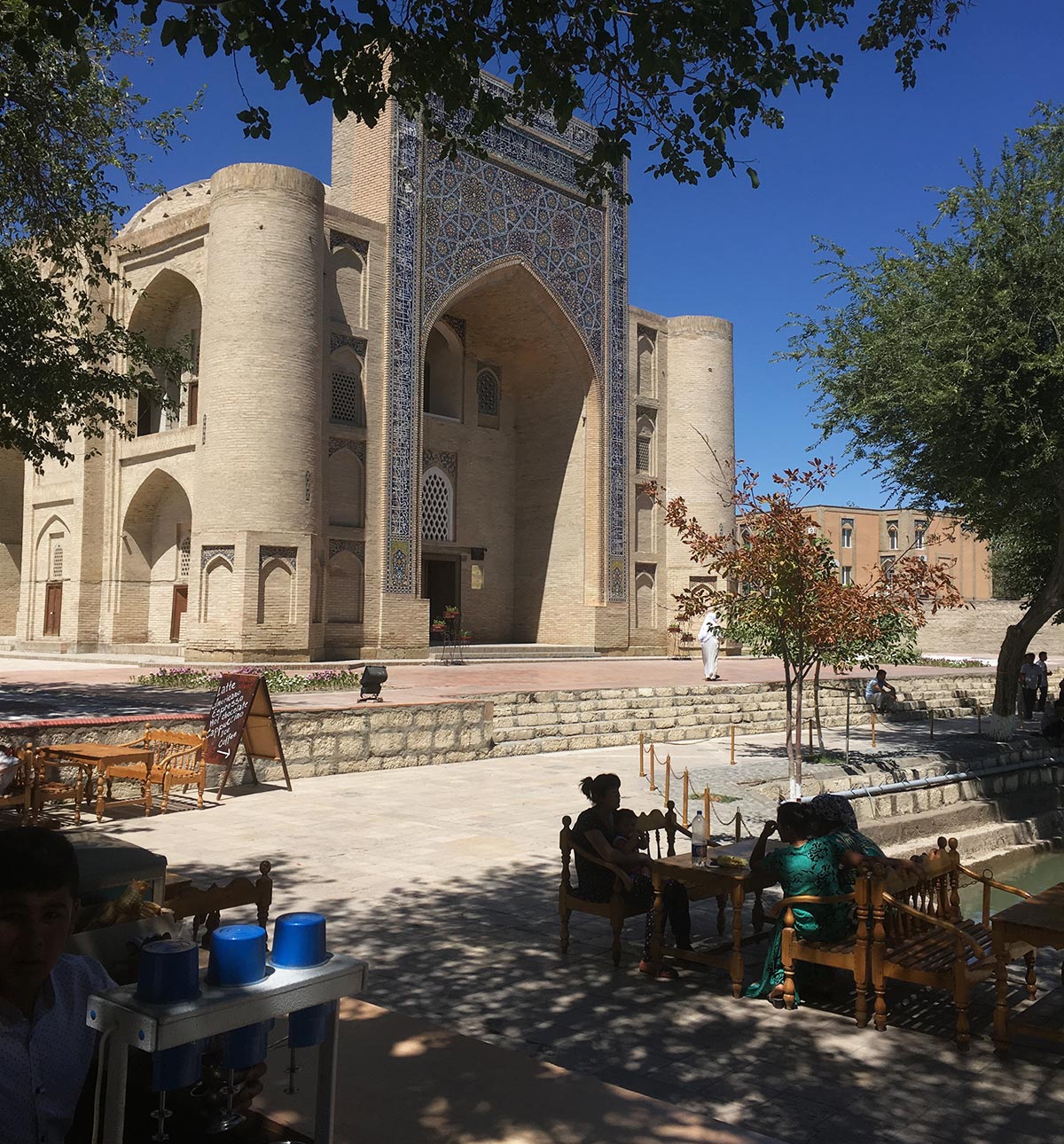 Finally, we swerved down a long driveway toward another identical cluster of Stalinist apartment blocks. Seeing a clearly foreign car with clearly foreign people turning off towards his home, an old man interrupted his busy day of smoking by the side of the road to come and head us off.

The old man strode towards us sternly, but when he saw Akmal, he looked shocked and laughed. A rapid exchange of Uzbek followed before he waved us on.

We parked our thirsty car under a small shelter. Once again Akbar was left with us, while Akmal went up to a house, knocked and entered. He emerged on the porch with a middle-aged man who peered grumpily at our cars. They appeared to be talking intensely.

Akmal came back to us, and confirmed how much fuel we needed: 100 liters. They only had 50, at a sharply higher price than we’d found earlier. Nevertheless, we needed it. Akmal and his friend disappeared inside while we waited by the cars, Akbar twirling our fuel cap around in his hands.

But we still needed 50 litres to safely reach Tajikistan, our next destination, so we regrouped at Akmal’s house. Like our hostel, it was a series of small buildings surrounding by a central courtyard. The main house appeared not to have a roof. There was a chicken coop in the courtyard, and what looked like the remains of a vegetable garden. Akbar quickly disappeared inside. Curious locals spotted the two Westerners from the street, leaned their heads around the door and stared.

It took an hour for our friend to return, drenched in sweat. The first house had 60 liters of fuel—10 greater than our capacity—and refused to sell us anything less. They’d battled through the angry streets to yet another “petrol station” where they were, mercifully, able to acquire the correct amount.

Back at the hostel, Akbar disappeared while we packed the cars and bade farewell to our new friends. Except we didn’t leave yet: we heard chatter from outside the hostel door, and opened it to see young Akbar, standing proudly among a chirping gang of local kids. We had a rugby ball handy, and someone had the presence of mind to toss it to the young lads. A furious game ensued, with these barely three-foot-tall kids giving us fully grown Kiwis a serious run for our money.

When the game ended, we beeped and blared our way through the narrow streets, finally back on the long highway to Mongolia. We had two full tanks of petrol and four heavy, sloshing canisters on the roof. Next stop, Tajikistan. **

Nathan began traveling alone at 17, when he bought a Greyhound ticket for 20,000 kilometres in Australia. In 2014 he moved to China, and was just about to take a job teaching English when he landed his first writing gig. Since then he's driven a Ford Fiesta from the United Kingdom to Kazakhstan and landed in Poland.

Sin City Seoul: Welcome to the New Side of South Korea