Canada Has a New Air Passenger Bill of Rights, but it Avoids One Major Problem. Canadians will soon be entitled to financial compensation if they get bumped or delayed. But what happens when flights get overbooked?

On May 15, 2017, Canada’s minister of transport, Marc Garneau, introduced long-awaited legislation to strengthen the rights of Canadian air passengers.

Often referred to as an “airline passenger bill of rights,” coming hard on the heels of recent stories of airline mistreatment of passengers—from draggings and leggings to misplaced children and dead bunnies—Garneau’s announcement couldn’t have come at a better time.

But while the bill is being generally welcomed by travellers everywhere, the fact that nothing will actually take effect until at least 2018 was only one aspect of the announcement that has left some already feeling underwhelmed.

For years, Canadians have been demanding some sort of legal protection from an industry that has largely been left to its own devices when it comes to customer service. Without any universal legal framework in place, Canadian travellers have been forced to read through each airline’s “Contract of Carriage” (most people aren’t even aware of a Contract of Carriage!) to see what—if anything—they are entitled to in the event of a flight cancellation, substantial delay, or other problem.

While Canada may lead the world in many human-rights issues, we are sadly lacking when it comes to passenger rights.

The European Commission passed Regulation (EC) No 261/2004 overseeing travel rights 13 years ago, while the US passed their own bill 12 years ago—although the recent spate of high-profile bumpings by several US airlines may see that law tightened even further.

What Do Canadians Get in this Bill of Rights?

Garneau didn’t provide many details, except to say the legislation would mandate the Canadian Transportation Agency to introduce new regulations to address the treatment of passengers, and ensure financial compensation for passengers who fall into the following circumstances:

The legislation will also ensure children are sat near a parent or guardian at no extra charge, and will ensure carriers “develop clear standards for transporting musical instruments.” (So Air Canada won’t break guitars, we hope.)

Despite the recent outrage over bumpings due to airline overbookings, there is nothing to suggest the new bill will outlaw that common practice—and that has upset some travellers and passenger advocates.

This contrasts Tuesday’s announcement, which also stated the legislation will ensure “fair compensation standards” for anyone who gives up their seats voluntarily, and would ensure “no one is involuntarily removed from an airplane due to overbooking.”

How the Canadian Transportation Agency will allow airlines to overbook flights, yet not permit airlines to involuntarily bump the occasional passenger, will certainly be a challenge for those who draw up the new rules.

“If somebody has bought a ticket for a particular flight, that person cannot be removed from that flight,” Garneau was quoted by the BBC as saying. “This is non-negotiable.” 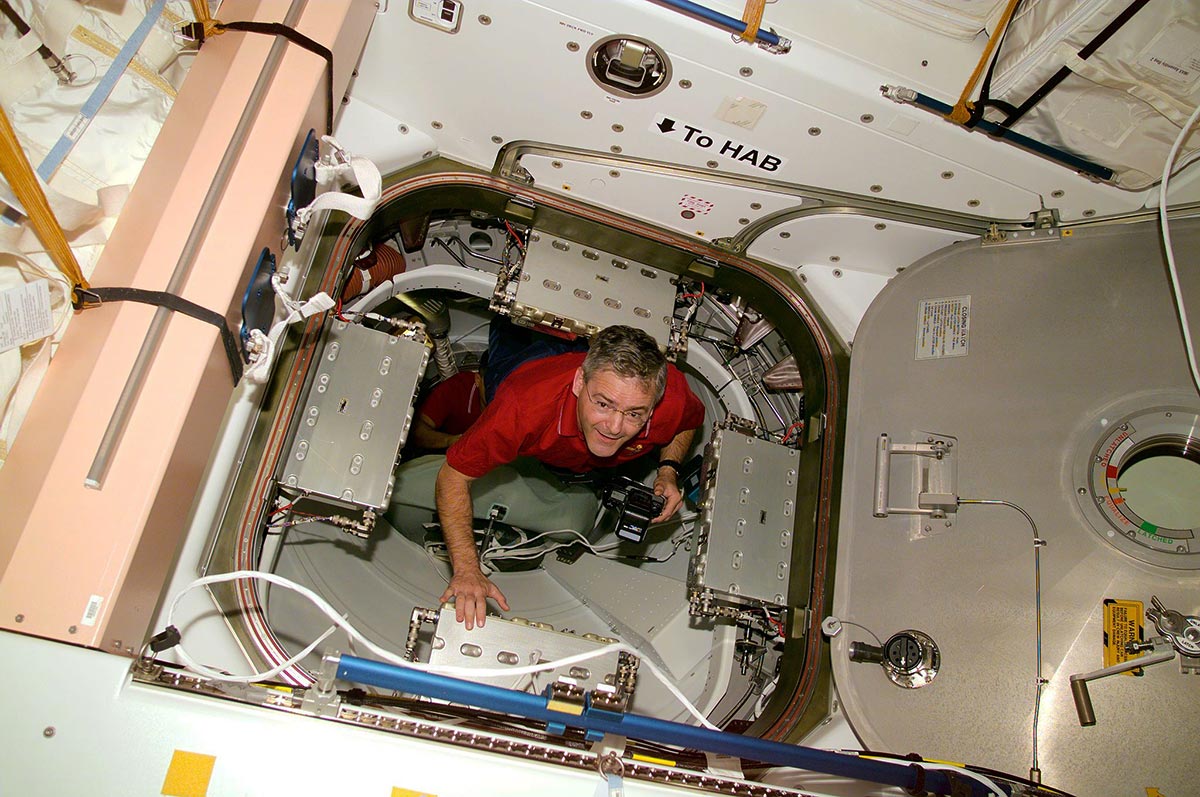 Marc Garneau probably never got bumped from the space ship back when he was an astronaut. (NASA/Wikimedia Commons)

Assuming Garneau includes “denied boarding” in the same category as “removal”—as airlines generally do—then as long as airlines can continue overbooking, sooner or later, a ticket-buyer will be forcibly removed.

If an airline sells 220 tickets for a 200-seat aircraft and 210 passengers turn up at the airport and only eight are willing to accept an ever-increasing cash offer to switch to a later flight, there will be two passengers with tickets for that particular flight who won’t fly.

What does an airline do then? A game of musical chairs in the departure lounge? Delay the flight for six hours until they can bring in a larger aircraft to carry everyone?

Airline overbooking is a complicated issue. Airlines know from experience that, for one reason or another, a certain number of passengers will almost certainly not turn up for their flights. “No-shows” are most often found among those passengers whose tickets allow changes, or cancellations that are either free or done for a nominal fee.

However, there are also those travellers who miss their flights through illness or for other reasons, and it is because of these situations that airlines overbook flights.

Although being bumped or denied boarding because of overbooking is never a fun experience (unless you have the freedom to delay your travel by a day and can grab the wad of cash the airline is waving in front of your face, of course), I do support the practice.

If airlines were prevented from overbooking, there is no question we would all be paying higher fares for our flights, as the airlines do their best to mitigate against last-minute, fully refundable cancellations.

However, rather than simply telling airlines that they can overbook but can’t remove anyone involuntarily from overbooked flights, critics have to ask: What about the new regulation makes it firmly in the airlines’ best interest to avoid a situation in which anyone has to be denied their rightful flight?

Perhaps if there was a mandatory cash payment of $10,000 to anyone involuntarily removed (and their travelling companion), plus overnight accommodation, transfers and food (where applicable), and a guaranteed business or first-class seat on the next direct flight, airlines would take overbooking very seriously indeed.

Such a policy would not prevent airlines from overbooking,  so should not have a considerable impact on fares, but it would certainly encourage all carriers to tread responsibly when calculating how many seats they’ll oversell.

In the meantime, I commend Garneau for introducing the legislation, and I not only wish the Canadian Transportation Agency every luck in drawing up the fine print, but I also encourage them to have proper and open consultations with airlines, tour operators, travel agents and, perhaps most importantly of all, regular travellers, before setting anything down in stone.

If nothing else, it’s a great start.

This Week in Travel News: Soon You’ll Be Able to Bike More Easily Around Jordan, Thanks to Charity