The Arctic is a Difficult Place to Travel, and That’s a Good Thing

My entire life, I’ve loved stories about the Arctic. The house I grew up in was littered with mementoes from my parents’ time living in the Canadian North. A tiny model of a seal-skin kayak, soapstone carvings, Ted Harrison paintings, whale baleen and the works of Farley Mowat and Robert Frost remain etched in my psyche.

In some ways, I think this mythologizing of the Arctic pushed me toward climate activism. It’s certainly why, this past June, I loaded up my van and drove six straight days from Vancouver to Deadhorse, Alaska, a bleak oil camp at the end of the Dempster Highway. There, I boarded a tiny plane, into the Arctic National Wildlife Refuge for a five-week expedition.

The plan, which I hatched with my friend Malcolm, was to kayak along the northern coast of North America, from the Inuit village of Kaktovik to a bay near the Alaska-Yukon border. Like so many well-laid plans, it went sideways the moment we hit the ground. 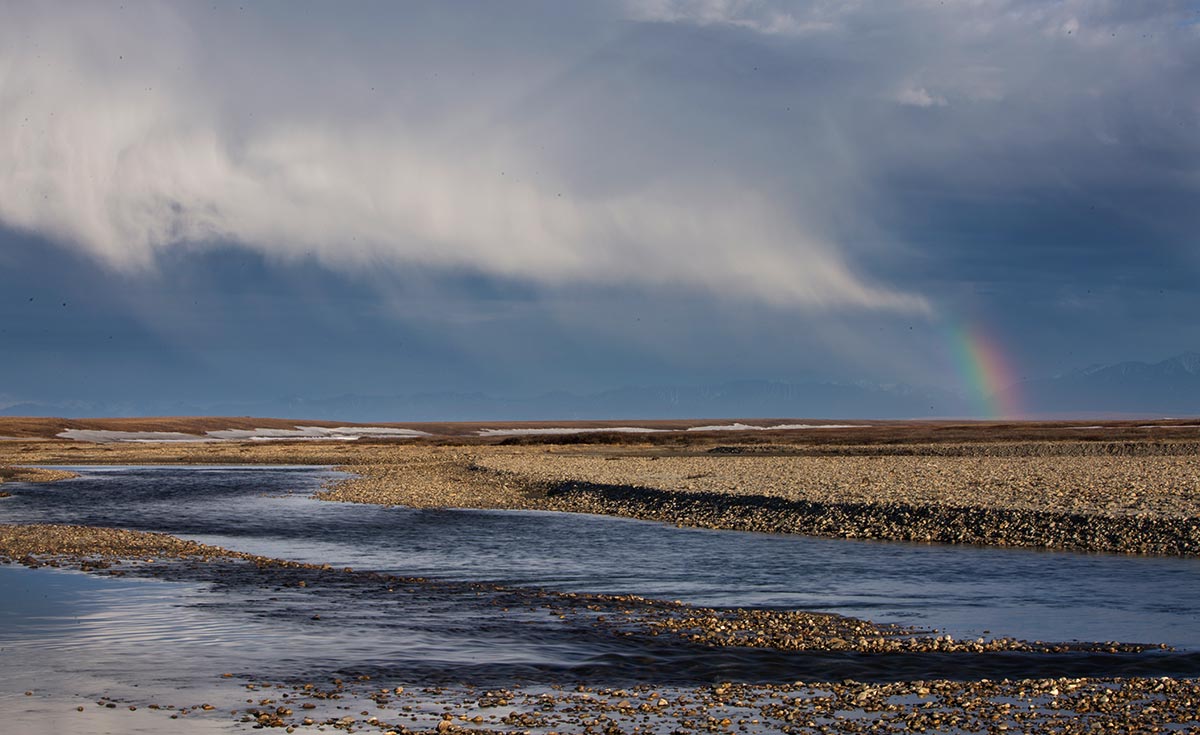 The first problem was, I was told, “nanuk.” According to the young woman helping us unload the tiny twin-engine plane that had flown us up to Kaktovik—the only town in the Arctic National Wildlife Refuge—nanuk had been in town last night. I knew the word, but couldn’t place from where.

When the pilot asked if the town still had bear patrol out, it jogged my memory. Nanuk is the Inuit word for polar bear; I’d read it in one of those books from the Arctic while I was a child.

But while polar bears were a majestic thing to childhood me, there were a terrifying thing to adult me.

You see, we had travelled to the Arctic for a five-week kayak expedition, and our collapsible kayak needed open water to paddle. It couldn’t handle serious ice. If polar bears were still around, it meant the sea ice hadn’t broken up yet—something I confirmed on the short ride from the airstrip to the town as I stared out at a horizon of white.

That was only part of the problem. The other was that, in expecting the ice to have broken, we assumed polar bears would have headed back out to the pack ice for the summer. We hadn’t prepared to camp with them nearby. 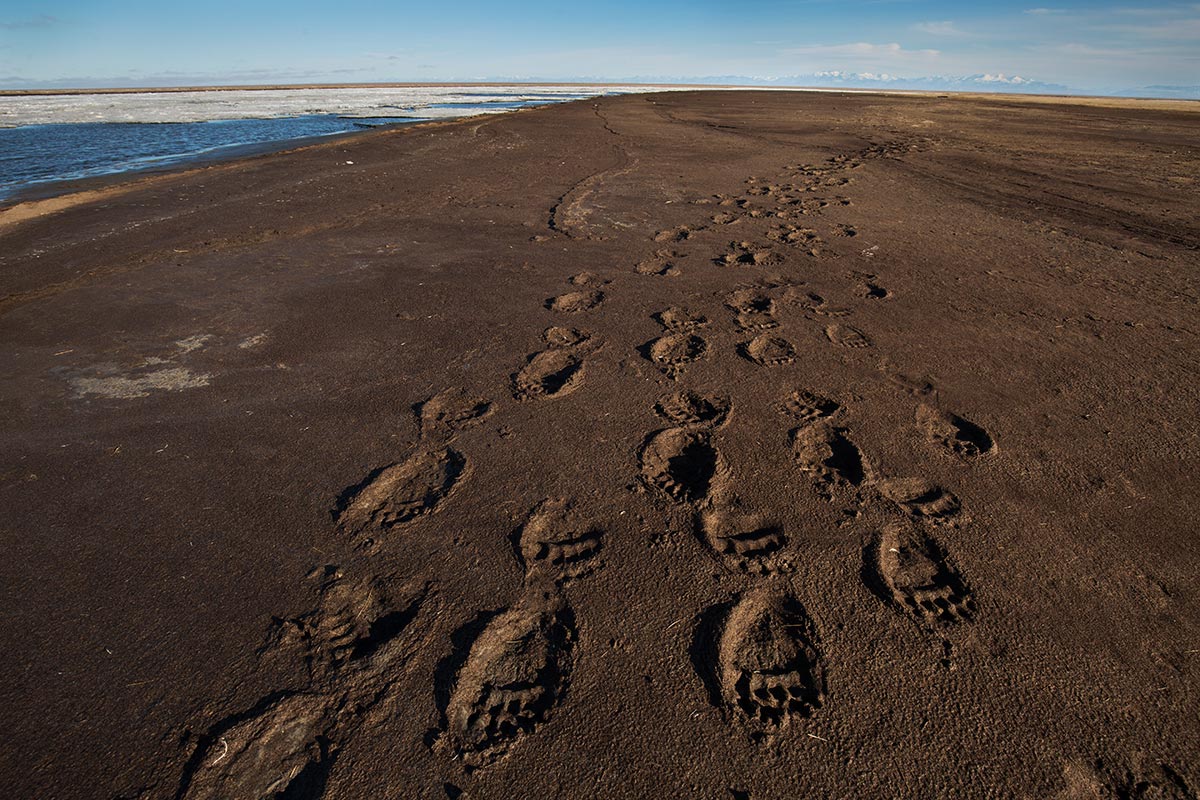 Our plan to spend five weeks wound up lasting less than two. We spent some of it searching for a way to get our kayak to open water, and some hiking out into the Arctic Refuge and camping among the thousands-strong Porcupine Caribou herd who descend to Alaska’s North Slope every summer to calve.

Most of it, though, was spent lugging hundreds of pounds of gear across frozen tundra or waiting around and hoping for the ice to break up.

Sitting in my tent one morning, I started laughing. There was something ironic about Malcolm and I, two people who had met and forged a friendship as climate activists, travelling to a part of the world that was melting (Arctic sea ice still hit record low winter extensions in 2017), and being thwarted by abundant ice.

As I sat there, laughing to myself like a deranged Arctic explorer and staring at the orange walls of my packable nylon home, I started thinking about cruise ships. You see, before I had left for the Arctic Refuge, I had been reading about something called the Crystal Serenity, and how climate change was ushering in a new era in Arctic tourism and travel.

The story starts in 2007 when sea ice in the Northwest Passage melted out. For the first time in recorded history, that fabled channel, a direct sea lane between Europe and Asia, across the roof of North America, opened.

Now passable, shipping companies, explorers and travel agencies all set their sights on the passage. Then, in 2016, the Crystal Serenity, a hulking behemoth cruise ship 13 stories tall and nearly the length of three football fields, set sail on a trip from Alaska to New York. It wasn’t the first ship to make the trip, but it was the largest.

The cruise was advertised as a way to see the threatened wildlife and communities in the Arctic. It sold out, with nearly 1,000 passengers paying tens of thousands of dollars for a spot. According to media reports and blogs from the voyage, they saw polar bears and icebergs, and visited tiny Arctic communities, some so small that the passengers could only visit in waves as not to overwhelm the communities.

They no doubt brought much-needed tourist dollars to these communities, and opened many eyes to the sheer majesty of the Arctic—but they also brought pollution, and the risk of an environmental catastrophe.

Sitting in Kaktovik during my trip this summer, I imagined a cruise ship on horizon. There was something appealing about trading my cold tent and soaked boots for a warm stateroom. The prospect of a hot tub and a chilled beer were intoxicating while I sipped rapidly cooling tea and ate dehydrated rice and beans.

At the same time, something just feels wrong about a cruise ship on that horizon, something perverse about being able to fork over tens of thousands of dollars to pass through these lands and waters without struggle or danger, all while making the threat of climate change even worse.

I’m no expert in Arctic travel. My expedition this past summer was a pretty epic failure. But maybe that’s how it should be. We need places on our maps where comfortable travel isn’t guaranteed, places that are hard to reach and harder to move through. Climate change shouldn’t be an opportunity for us to travel more easily in wild and remote places, but a harsh wake-up call to protect them.

In Photos | The Last Head-hunters of Nagaland