UPDATE: Europe’s decision on whether Canadian passport holders will be required to obtain visas to enter the Schengen Area has been deferred beyond July 12, the original date of decision. The European Union has announced that no decision will be made before the EU-Canada Summit, to be held on October 27–28, 2016. In the meantime, it’s business as usual for Canadians travelling to Europe this summer and fall. And that’s a good thing!

Below is the original article, published spring 2016.

Canadians may soon be required to obtain visas in order to enter the 26-nation Schengen Area of Europe, a zone that includes perennially popular Canadian travel destinations such as France, Italy and Spain.

For anyone planning on doing their summer walkabout on the Continent this year, that new requirement could add anything from time and aggravation to costlier travel planning. 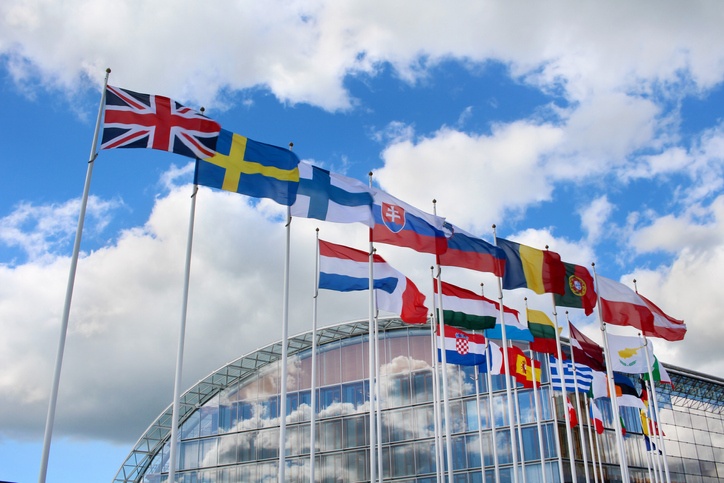 Flags of the member states of the European Union. (Ziss-iStock)

The potential change comes as a result of an ongoing dispute between Canada and the European Union.

They’ve responded by declaring that if Canada does not lift that requirement by July 12 (editor’s note: see update, above), they may require Canadians to have a visa in order to enter any country within Europe’s Schengen Area.

So what’s the EU’s problem with Canada?

The Canadian requirement for Bulgarian and Romanian passport holders to obtain visas in order to travel to Canada predates their countries’ admission to the EU. It hasn’t been lifted by the Canadian Government out of concerns that the two nations haven’t met Canada’s stringent visa-exemption requirements.

To be fair to Canada, the EU hasn’t exactly swung open their own doors to those two nations either, over similar concerns. Although both were admitted to the union in 2007, neither has been admitted to the Schengen Area. Ironically, despite that, the EU still wants Canada to allow visa-free access for the citizens of both countries.

Visa-free access not only saves time applying at embassies or consulates before travelling or having to obtain a visa on the spot at an airport or border crossing, it can also save considerable expense with visa fees. Each year, residence and citizenship planning company Henley & Partners issues an annual Visa Restrictions Index, and, according to its 2016 list, a Canadian passport ranks joint-sixth providing visa-free access to 172 countries around the world.

If the EU makes good on its threat, Canada would likely drop considerably on the table—although not quite as far as Afghanistan, which currently sits in last place and whose citizens have visa-free access to a mere 25 countries, according to the index.

There are a number of reasons why countries require visas. Some are to pre-screen visitors for reasons of national security, or are an attempt to prevent travellers from arriving and never leaving. Some are purely political and are down to a lack of good relations with other governments, or are a tit-for-tat response to the other country’s requirement of a visa for its own citizens.

Some countries, such as Bhutan, limit the number of visitors admitted each year just to help preserve the nation’s culture; others appear to the cynical to be little more than a cash-grab designed to help add some valuable hard currency to the government’s coffers.

Is there good news for Canadian travellers?

Yep. One bit of good news is that the UK and Ireland are not members of the Schengen zone. Regardless of the EU’s ultimate decision, nothing will change for Canadians seeking entry to these two countries.

The other good news is that Canada is not alone in this fight, as the U.S. also requires Bulgarians and Romanians to have a visa to enter that country, and they have likewise been fingered by the EU. Alienating Canadians and Americans could potentially cost European countries an awful lot of lost tourist dollars if North American travellers give continental Europe a pass because of a visa hassle.

Should the EU dig in their heels and act on their threats, it is highly unlikely Canadians would have to obtain separate visas for each European country visited. (As Schengen is a borderless zone, once you are in, there are currently no border checks, for example, when driving from Italy to Austria or from France to Belgium.) How much that Schengen visa would cost, or how a Canadian passport holder might go about obtaining one, is another question altogether. It could be a simple online procedure that takes a few minutes and costs nothing; or, if the EU decides to become rather recalcitrant, it could be a lengthy process that involves physically sending your passport to an embassy and paying a significant fee. Unlikely, but certainly not impossible.

Should a Canadian already be in Europe on July 12—or any day that the visa requirement took effect—it’s also unlikely they would be required to get up that morning and dash to the nearest immigration office for a visa. Although, in theory, that could also happen!

Should Canadian travellers freak out?

Regardless of the decision that the EU reaches, removing Canada from its visa-free lists would be a nuisance for Canadian travellers, though I suspect it won’t come to that.

I also suspect that Ottawa will not want to upset Europe and inconvenience its own citizens, and/or that Europe will not want to sour relations with Canada and the United States. Nor, I imagine, damage its own tourism industry, already hit by terrorism threats and attacks. I am assuming some sort of face-saving arrangement will be reached before the final deadline.

However, if you are heading to Europe this summer, I advise keeping a close eye on the news—the last thing you want is to be denied entry because of a missing piece of paper or e-document.

Of Myths and Legends in the Great Bear Rainforest | British Columbia

How long can a Canadian stay in continental Europe without a visa?

If a European passport holder (Belgium ) is traveling to Canada
And wants to travel to the USA Do they need a visa to do so,
Since they are traveling from Canada into the US and not directly
From Belgium to the US ?

No, Juergen, you should be fine. Just your passport will work. Enjoy North America!

Not true, he will need an eTA to travel to Canada and an ESTA for the United States. ETIAS visa will be required for both Canadians and Americans soon. Fortunately, it is similar to them having to fill out the electronic visa to come to North America so its not a big deal.