Iceland feels like a mystical land of stunning beauty. And it is. Yet for one lifelong chess player, it was here where Bobby Fischer defeated Boris Spassky in now-legendary 1972 World Chess Championships.

Story and Photos by Bill Schroeder

For our 25th wedding anniversary, my wife and I wanted to travel somewhere completely different, and so picked Iceland. It was wonderful: waterfalls, glaciers, hot springs, waterfalls, unusual geological formations, geysers, volcanoes, icebergs and more waterfalls—a stunning panoply of natural wonders that is impossible to adequately describe in words, as a quick browse on Google images will reveal.

Our travel pattern has been established over the years; I’m an early riser and she is not, so that is when I typically slip out of our hotel room to explore sites I know she will not be interested in. Staying in the capital of Reykjavik on our last day in the country, I took the chance of going to find Laugardalshollin, the venue for the most famous chess match in history, and a place I had been hoping to visit for more than 40 years.

It was here that Bobby Fischer, the enigmatic American chess prodigy, defeated Boris Spassky, the latest in a long line of world champions churned out by the Soviet chess juggernaut. The match was widely covered internationally, front page news on the covers of the glossy magazines, the first time the sport had, however briefly, leapt from its niche obscurity to be noticed by the wider public.

Occurring as it did during the height of the Cold War, this was aided greatly by thoroughly epic overtones that could be emphasized: good versus evil, David and Goliath, Western democratic individualism versus soul-destroying communist collectivism. 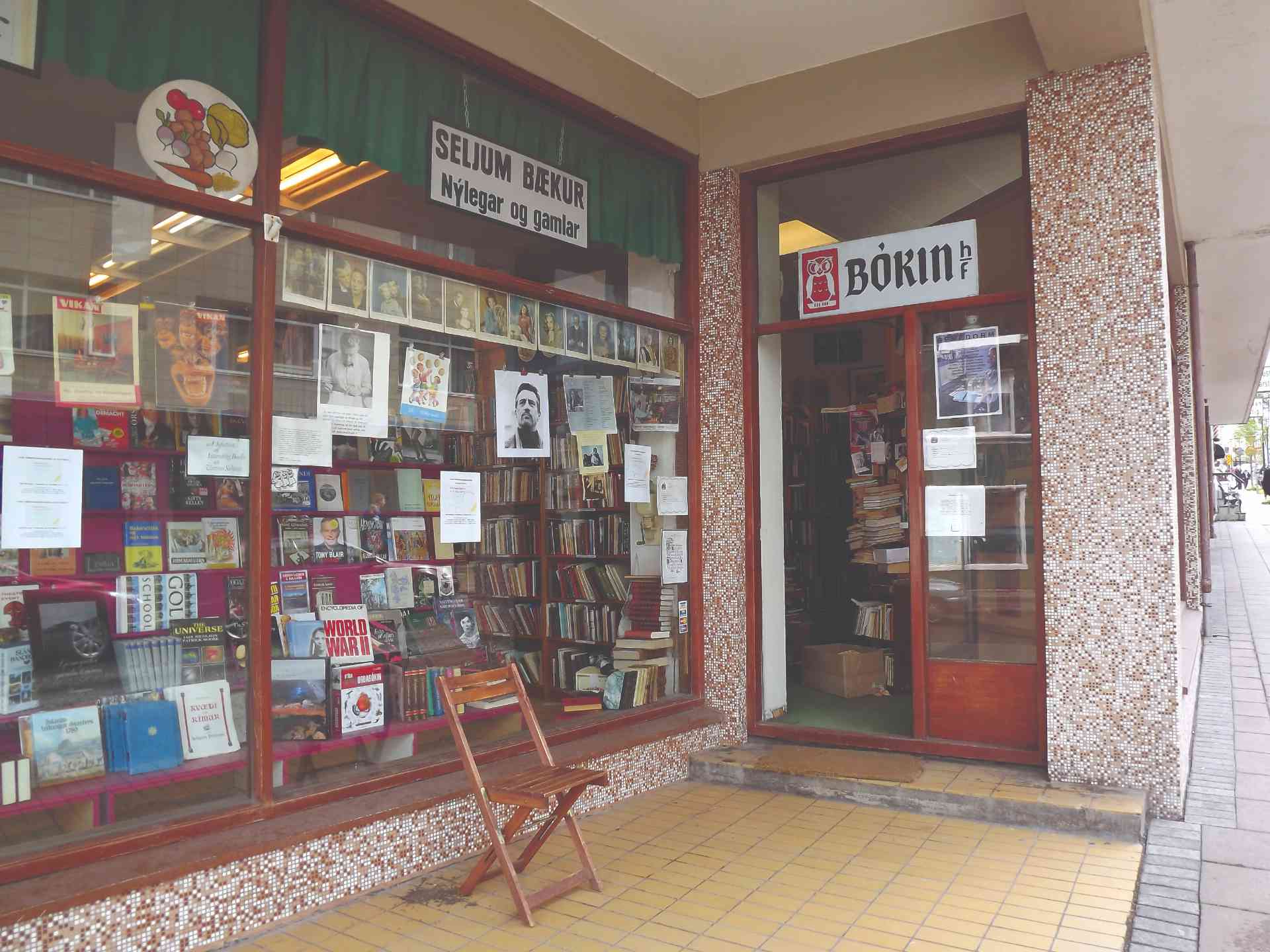 To a 16 year old, 1972 seemed like a pivotal year in world history. The Vietnam War was not going well. Americans had won the race to the Moon, although that triumph was somewhat tarnished by the subsequent Apollo 13 fiasco. Everywhere it seemed that the USSR was on the ascendant.

And while socialism may have had some intellectual appeal to an impressionable teenager—the sharing, we’re-all-in-this-together philosophy sounded good in theory—it’s manifestation in the USSR was stultifyingly boring. Blue jeans had to be smuggled into Russia. Spies lurked everywhere. Rock and roll was banned. Who would want to live there? 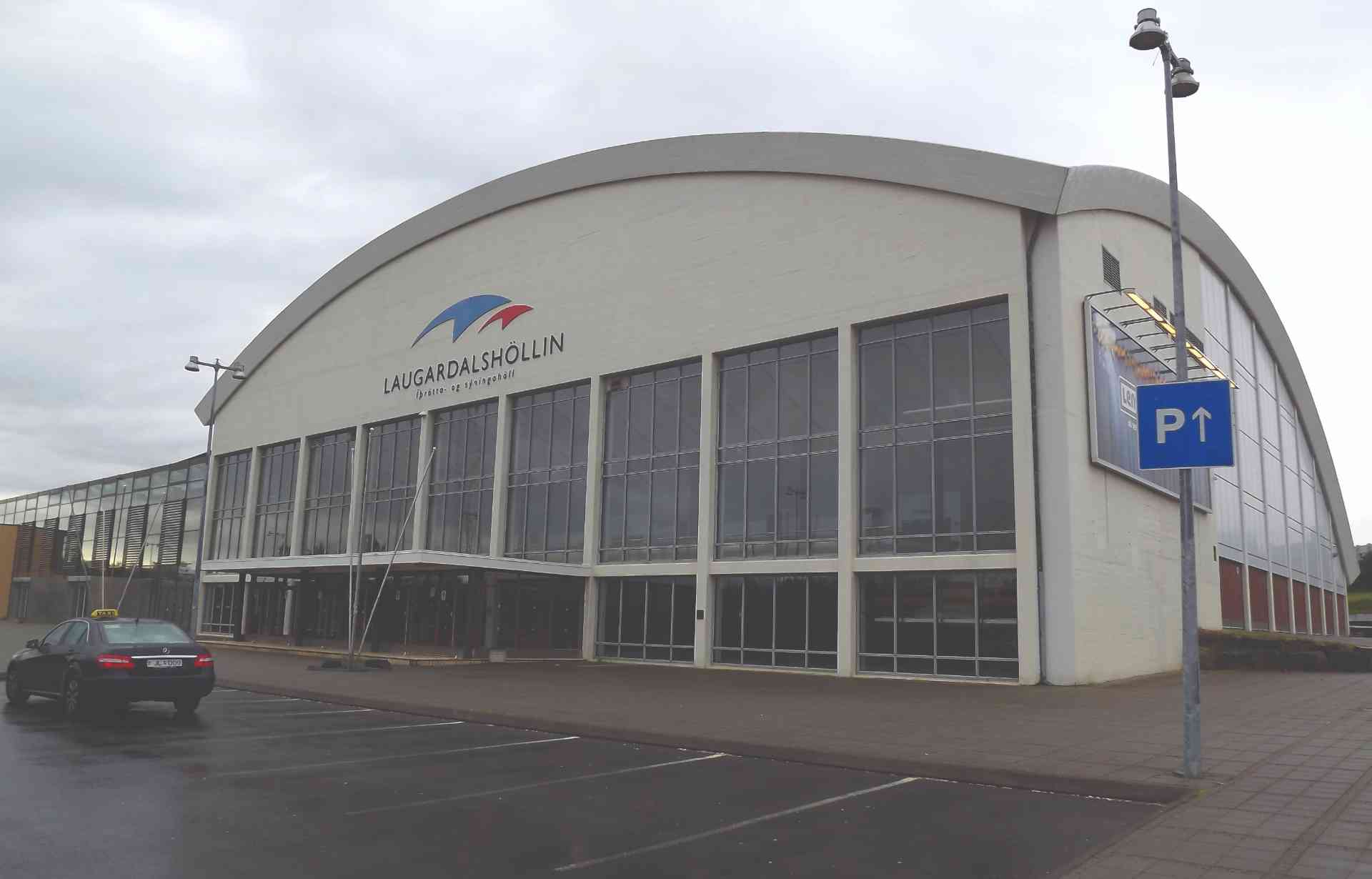 And then came the glorious fall of 1972, when two seminal events—the original Canada-Russia hockey series, and the Fischer-Spassky chess match—served notice that freedom-loving Western democracies could prevail in contests of skill and athleticism against the rigid Big Brother Soviet machine.

The post-1972 career of Bobby Fischer is much less edifying. Always eccentric to the point of paranoia, Fischer had, even during the match, made a number of bizarre demands and threatened to leave if they were not satisfied.

Following his victory, Fischer promptly disappeared from public view, and he forfeited his title rather than defend it as scheduled. He did not play another competitive match until 1992, when he agreed to an unsanctioned rematch with Spassky, well-funded by generous sponsors, to be held in then-Yugoslavia. 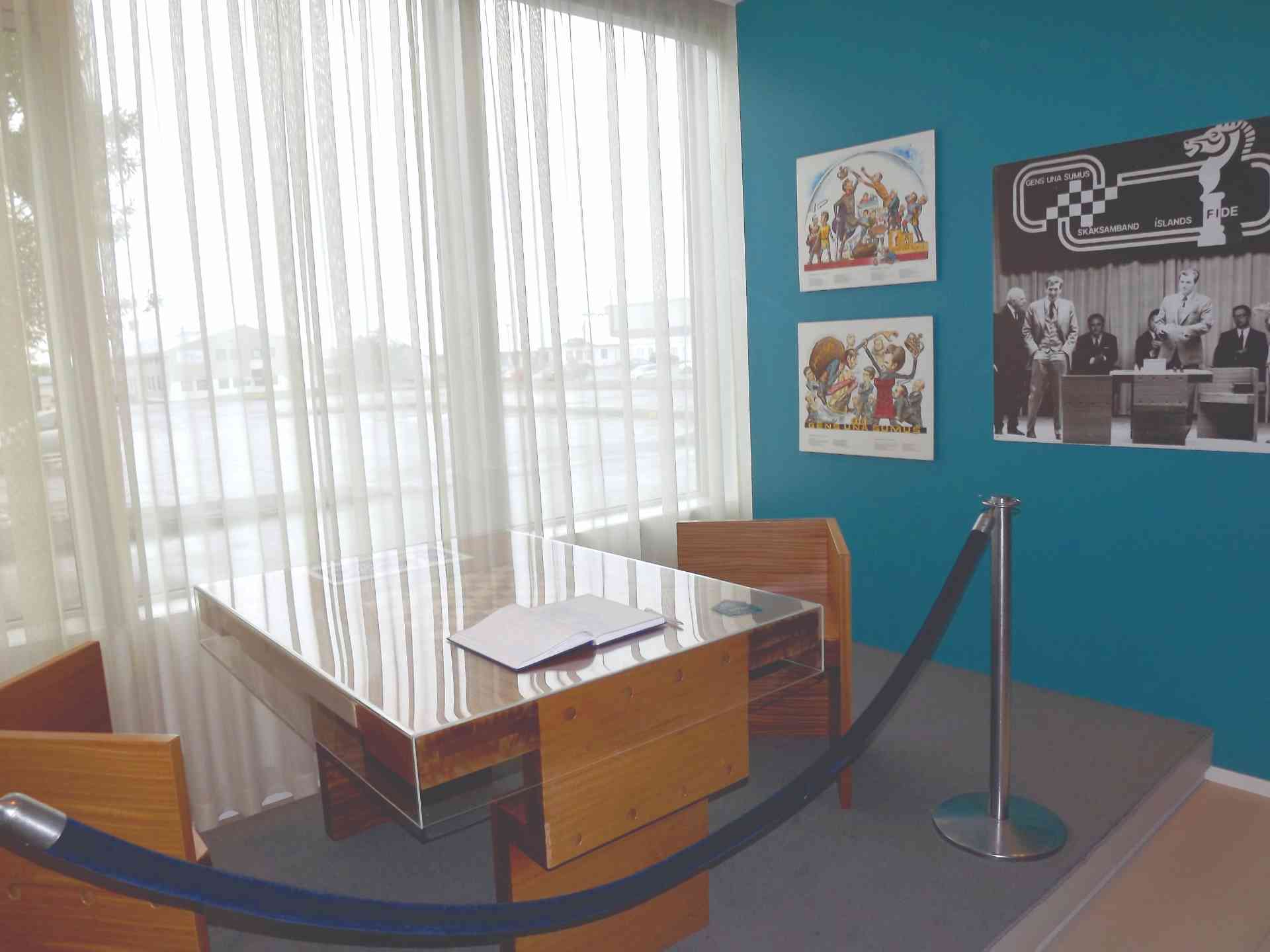 The famed chess table where Bobby Fischer and Boris Spassky squared off.

Unfortunately, U.S. citizens were barred from visiting that country for political reasons, and Fischer provoked the ire of the American government by defying the boycott and participating anyway.

A warrant was issued for his arrest; Fischer lived incognito in Japan for an extended period, where he met and lived with a Japanese woman, apparently marrying her when he was discovered and detained. Just when it seemed like he would be deported to the U.S. to face charges, the Icelandic government intervened and granted him citizenship. Fischer was spirited to Iceland in a private jet and spent his remaining years there, a reclusive hero in his adopted home. He died in 2008, and is buried in a small rural cemetery near Selfoss, about 50 kilometres from the capital.

Laugardalshollin is not the easiest place to get to at 7:30 on a Sunday morning. My tourist map highlighted 48 places of interest in Reykjavik, but Laugardalshollin was not one of them. I knew that Bus#14 would take me there, but standing in the rain on a windswept downtown street, devoid of all pedestrians save for a few stragglers from the all-night Reykjavik party scene, the posted schedule noted that the first bus would not pass by for another two hours. I quickly shifted to Plan B: find a taxi driver who looked old enough to remember 1972.

Gunnlaugur proved to be an inspired choice. He remembered it well, and regaled me with tales of his grade school days when all his friends followed the match closely, excited to have such an important world event occurring in their remote homeland. 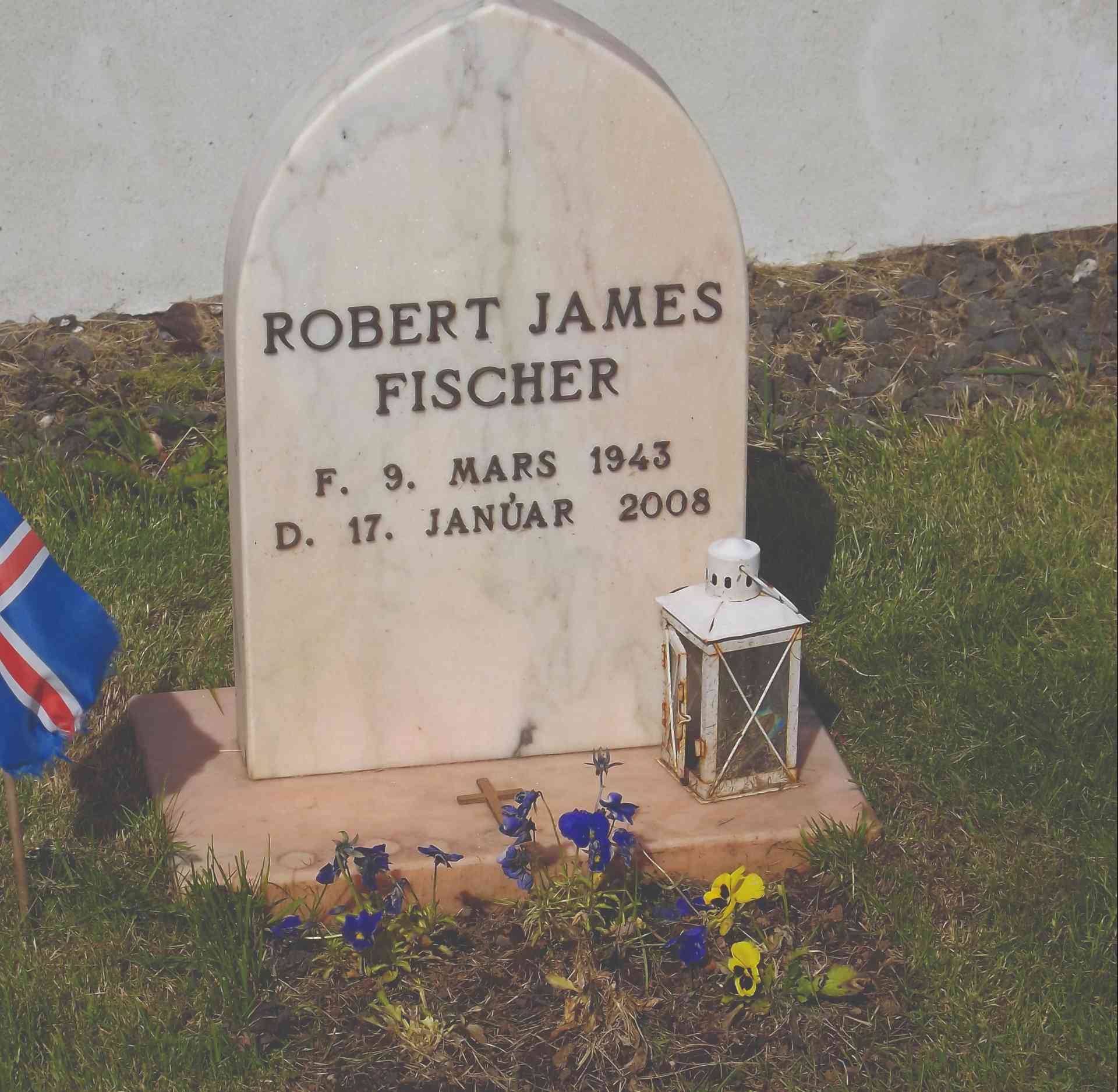 Bobby Fischer’s final resting place in Reykjavik, Iceland, where he died in 2008.

“It’s the first time the rest of the world noticed us,” is how he summed up the attitude of Icelanders at the time.

Well versed in Fischer lore, Gunnlaugur took me on several detours en route. We drove by Bokin, a second-hand bookstore frequented by Bobby Fischer in his later years, and the Hotel Natura, where the table and one of the chessboards used in the event had ended up some time ago, discarded by the venue when it was being reconfigured for other purposes.

Arriving at Laugardalshollin was the epitome of an anticlimactic experience. Functional but uninspiring, the hall now serves as a venue for concerts and is the home of the Icelandic handball team, one of the biggest sports in the country. Who knew? The doors were all locked, and there was no one about. In any case, as Gunnlaugur had made clear, there was nothing chess-related to see inside anymore.

We drove around to the back door, cordoned off in 1972, where Gunnlaugur and his friends had watched the players enter the building. Standing in the fog and drizzle, the empty asphalt parking lot evoked feelings of sombre solitude, not dissimilar to what is felt when crossing the vast and barren lava fields elsewhere in the country. And that is where my bucket-list quest concluded, soggy but satisfied, on the steps of the service entrance to a nondescript Icelandic conference centre. Been there. Done that. **

The Outpost Mini Guide to Travel in Wales | U.K.

I Say Potato, You Say Putin-oh! | The Risk of Speaking a Little Russian When That’s About all You Know