This is a guest post from Tan Your Mind, Outpost’s web series in Thailand. To learn about Season 2, click here!

It was our last night in Chiang Mai. We had done so much, seen so much, met so many profoundly impacting people—we had to go out with a bang.

I walked up to the travel desk at our hostel and, for a moment, forgot I was in Thailand: the agent looked like he’d never seen a day in the Thai sun, wore a plaid shirt and stuck his nose in his computer screen. I stood there a moment and coughed into my hand before he dragged his eyes up from blue-hued glow.

“Hi. Hi—sorry. Um, sorry. I have a question for you. If you could choose one thing for us to do on our last night, what would it be? Muai Thai boxing? Or… I did see some advertisement of a guy sticking his head in a crocodile’s mouth…?”

“No, no, forget Muai Thai. Muai Thai, shmuai Thai. You’ll never forget this! Here, let me just message them on Facebook and see if I can get you a spot.”

“We have video cameras. Is that ok?”

“Are you kidding? They’ll love it!”

And so to the Cabaret we went. 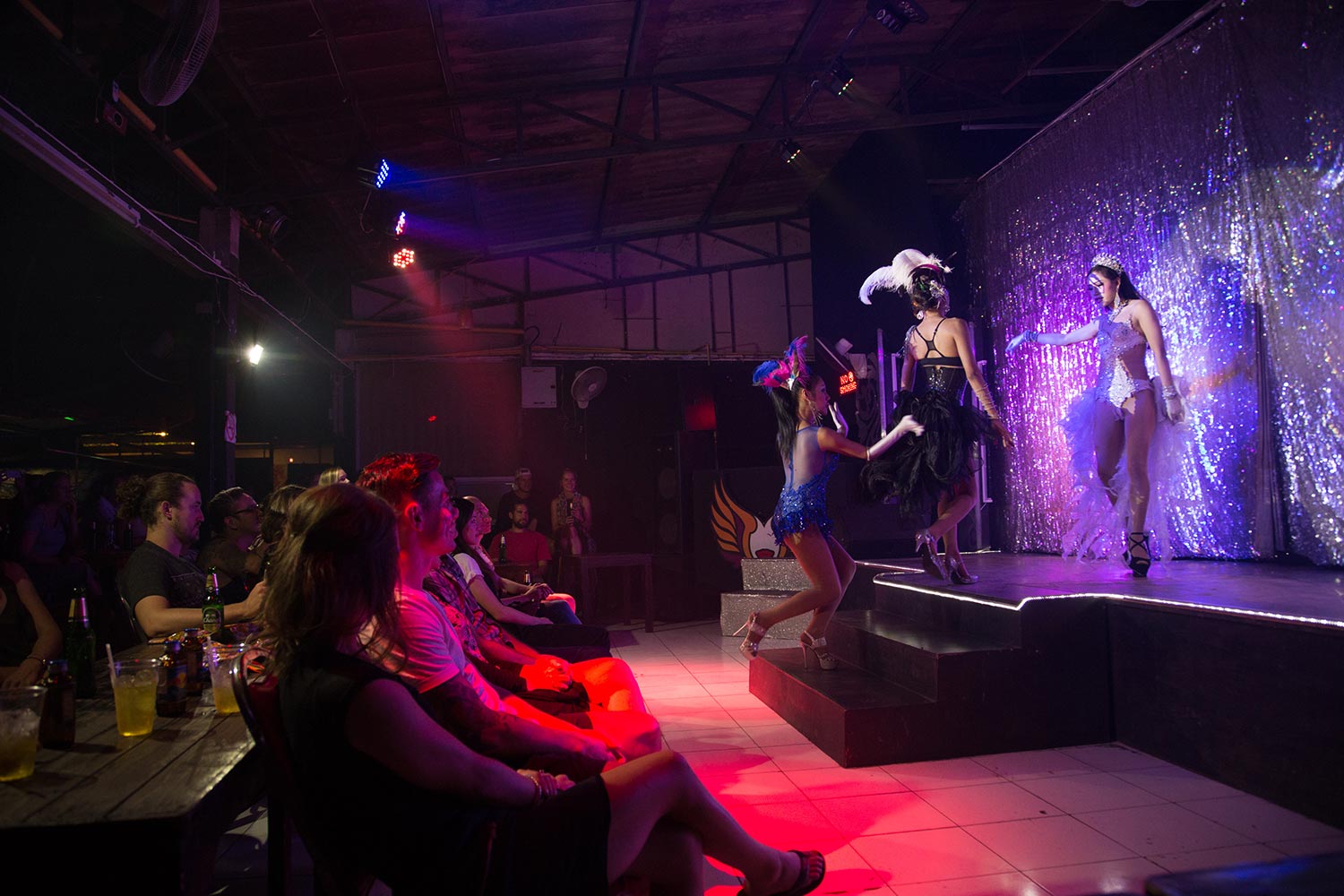 All the way back in Bangkok, we had asked our friend about Thailand’s gender culture. He’d told us that he feels the country is progressive than the rest of the world in that respect—he noticed a general acceptance of humans for the human beings that they are, regardless of the gender or sexuality they identify with.

I researched this more online after the fact, and learned that kathoeys—the formal Thai term for males who adopt female identities, which isn’t always a term used kindly—do face discrimination, both institutional and otherwise, as well as some of the everyday challenges that transgender and gay people face in North America. Nothing kills a utopia like a closer look. 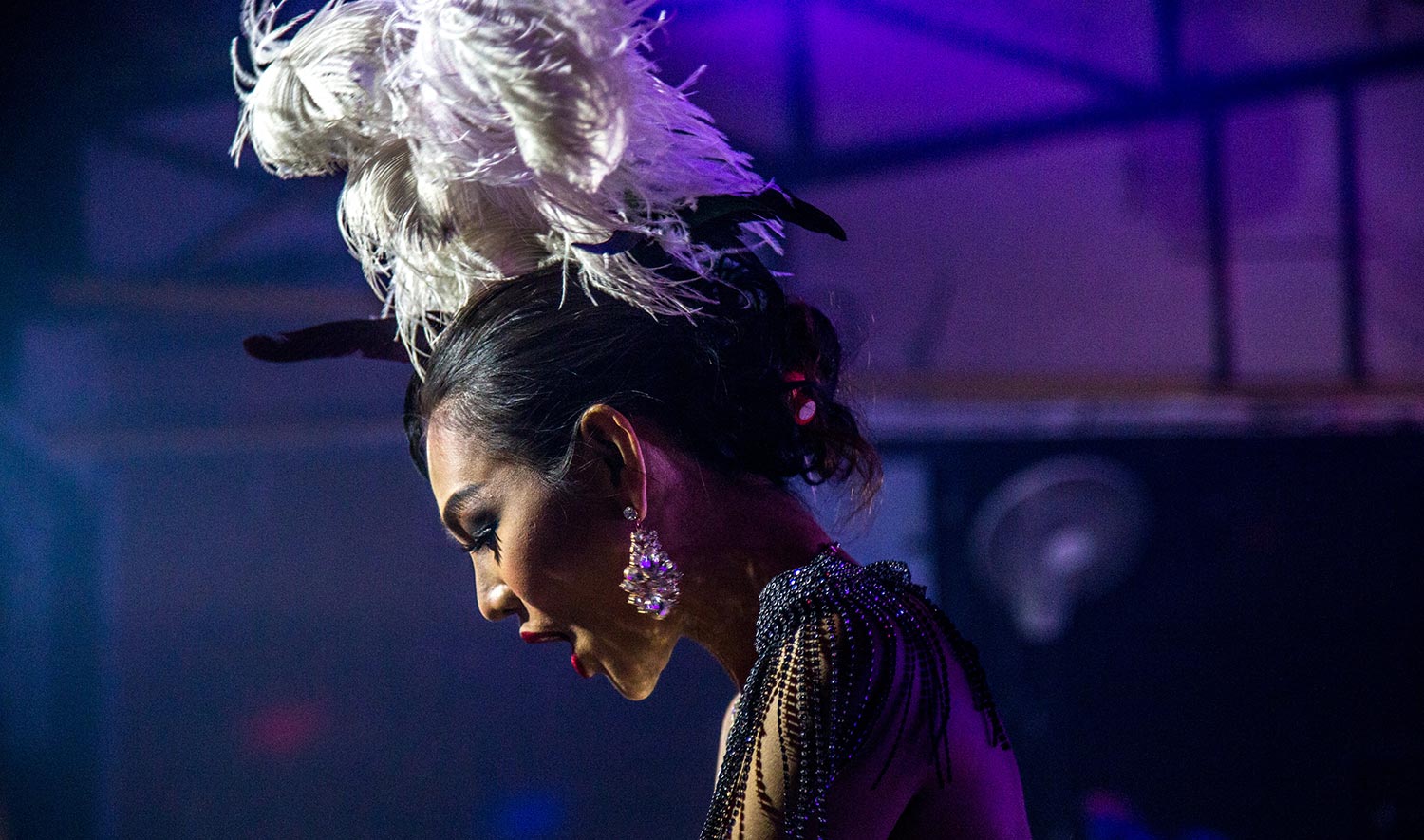 This is one of the best shows on earth.

Nevertheless, our tuk-tuk driver dropped us off at one of the central market’s many mouths. Somewhere past the Thai fisherman pants, artisan soap and trinket vendors, I imagined an MGM Grand of sorts awaited.

While the venue itself wasn’t nearly as grandiose, we didn’t have to look hard to find the show. Three performers stood at the helm of the outlet where the theatre was. More sequins than a disco ball, donning heels up to my shins and eyelashes that fluttered like butterflies, one hand on a hip, with the other three performers beckoning us in. 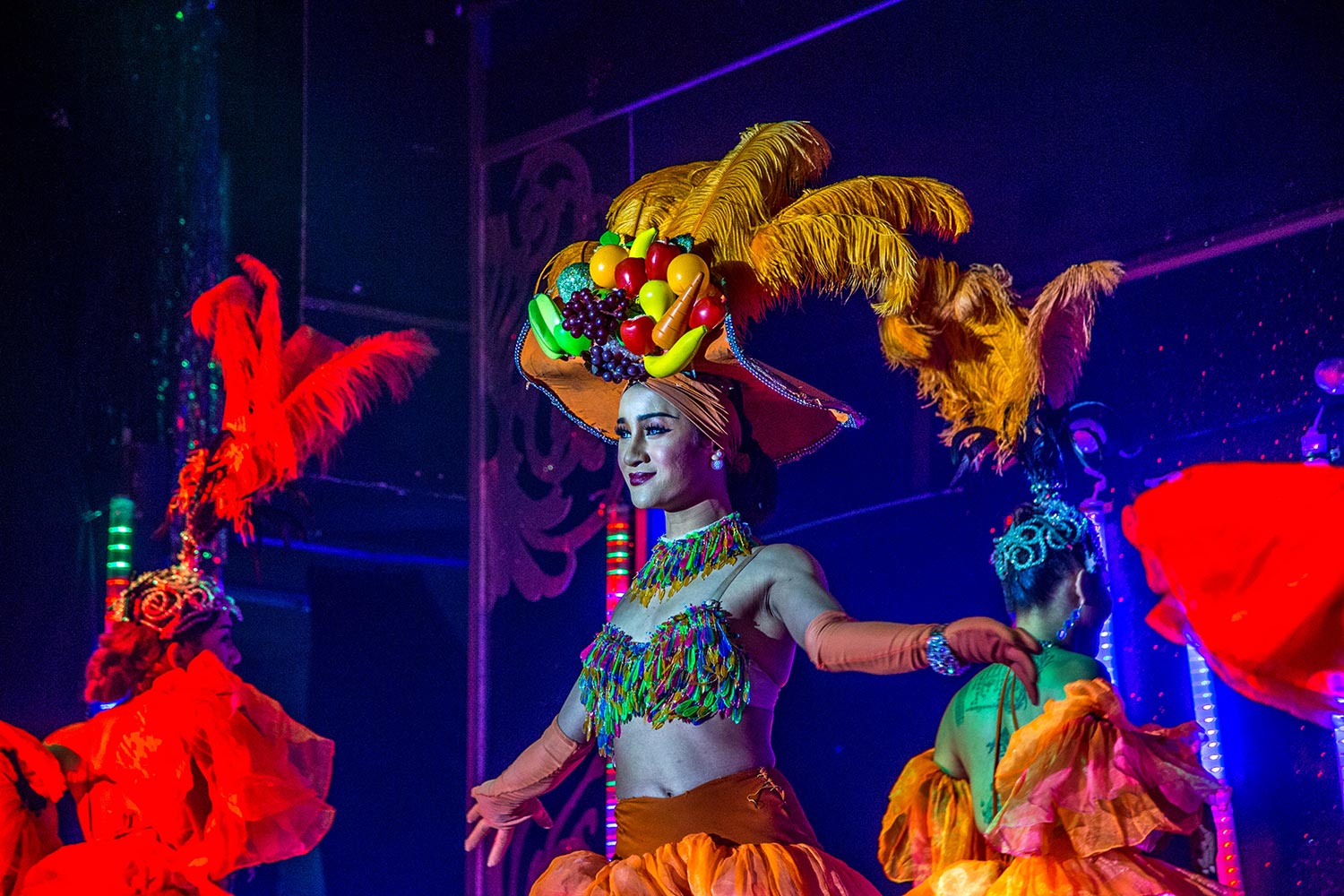 We asked again, confirming that indeed we could film. They didn’t waver. They brought us to the front row. While we were early, it didn’t take long for the theatre to fill up.

The lights dimmed, the crowd simmered and the show began, and it again felt like I’d disappeared from from Thailand. Was this the Moulin Rouge?

Long ruffled skirts spun like cupcake tops as the performers twirled. Long legs escaped the fabrics and delicate arms led to soft hands donning colours as bright as a bird of paradise’s wings. Long, furtive glances were shot from the performers to the guests, eyelashes flapping, as one handsome patron in the front row became the favourite. 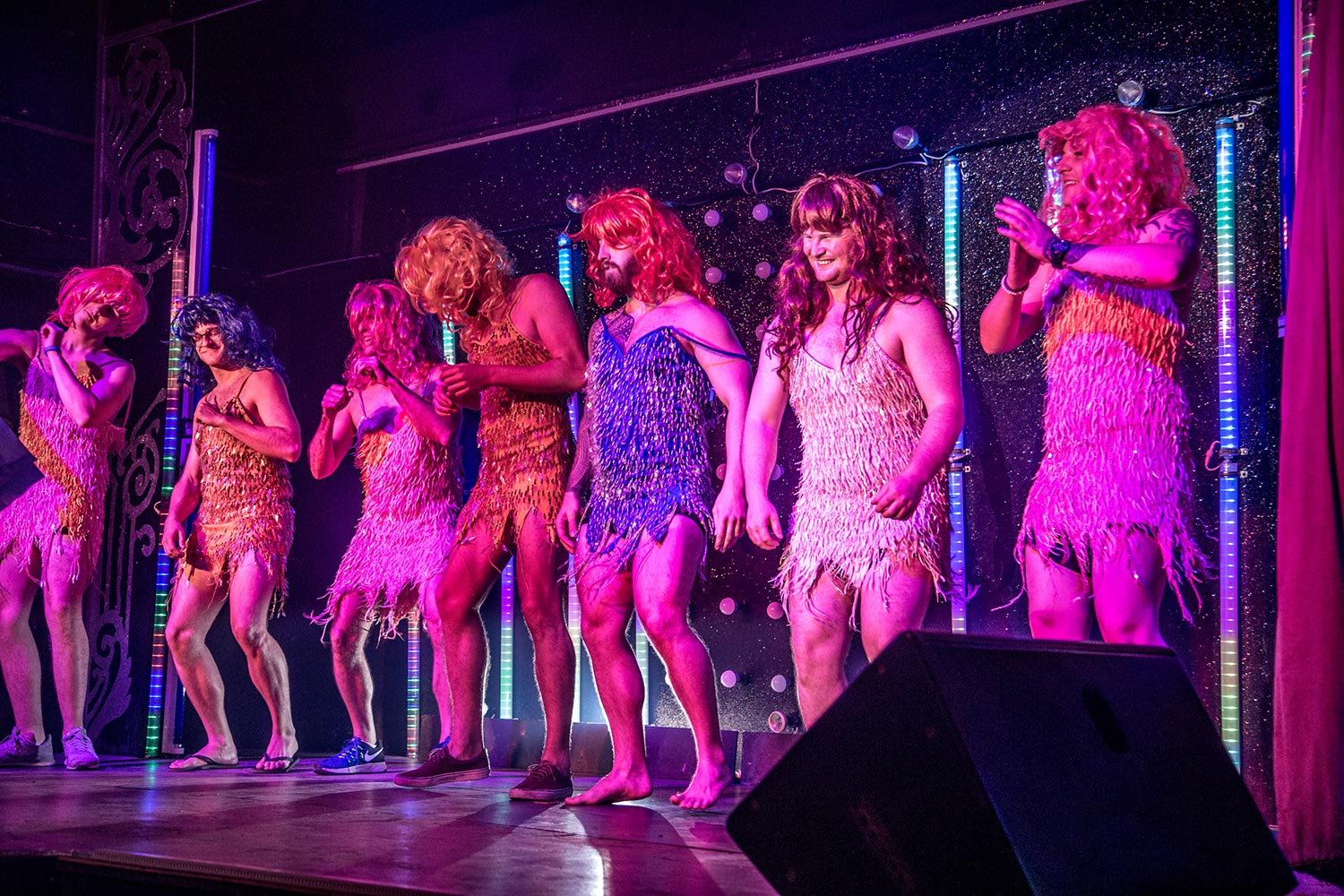 Unbeknownst to this stoic audience member, the performers would choose him over and over again to steal a seat on his lap, or a kisses on the cheek and even steal one through trickery on the lips. A good sport, he played along, as his parents and girlfriend laughed on; the entire crowd’s reactions ranged from hoops and hollers to belly laughs and silence, entirely mesmerized.

Beside Sue and I, our video crew captured the highlights on film—not that finding good moments was hard. Every time a performer passed by, they’d sing directly to the guys. Whether they were hamming it up for the camera or the boys, we were never quite sure. 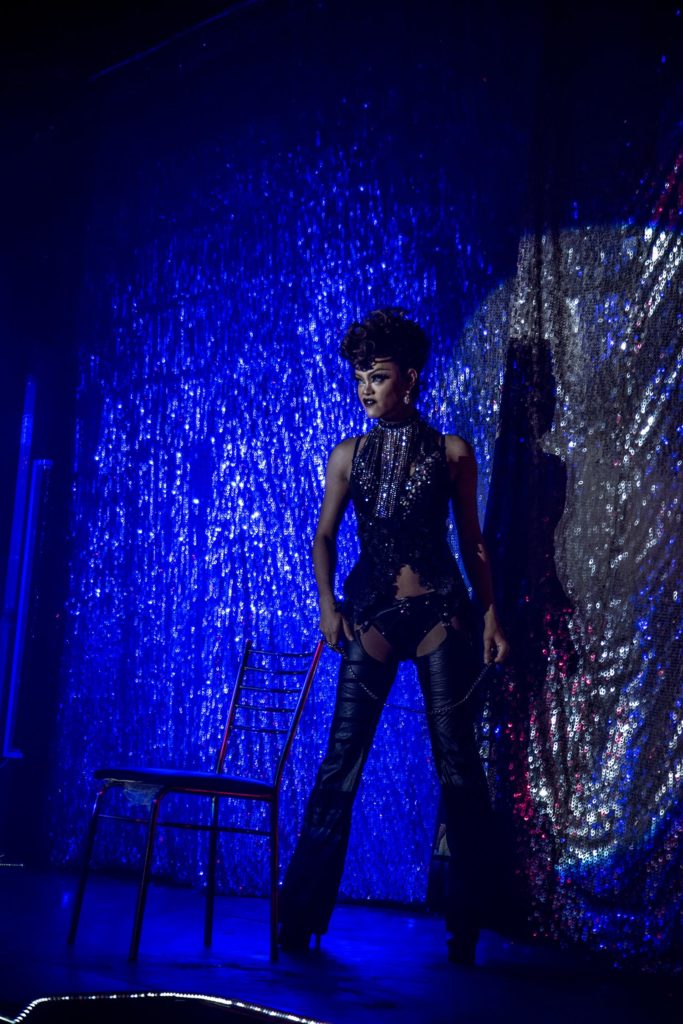 As for those “highlights”—I don’t think they ever stopped. Rihanna made a guest appearance, derobing one audience member on stage; more Western male audiences members were dressed and wigged, made pretty, shaking their hips under the spotlights; an emotional performance of “My Way,” where the performer was stripped of all female accoutrements and changed back into male clothing.

The energy was near nuclear. The performers were undeniably beautiful. The performance was flawless. The costumes, ornate. I danced for 18 years, and I don’t think I ever put on a show that entertaining.

As the curtains fell, the crowd rose to their feet, clapping and laughing and hooting and hollering. The lights dimmed and the performers flooded back into the crowd.