Revisiting Christmas around the world | In Peru, like other parts of South America, the holiday is celebrated with a big bang, as two expats surprisingly found out.

One of the first things we noticed after moving to Arequipa were repeated explosions off in the distance, every day, often multiple times a day, from the afternoon well into the evening.

I once asked an expat friend what they were. Mineral mines? Gunshots? Military tests? No, no and no; they were fireworks, explosions set off by locals, celebrating the country’s numerous festivals, saints and festivities.

In Peru, homemade fireworks are rampant, awesome and lethal—pick up a newspaper on any given day and you’ll read about hospitalizations after some horrible misfires. Just this past November, Peruvian authorities confiscated roughly 21 tonnes of illegal fireworks, exploding them all like confetti in the desert.

It was one of those quirks I loved about Arequipa, the intellectual city of a million people to which my girlfriend and I had moved to escape the Canadian winter. We were happy with our decision: Lima seemed too busy; Iquitos, too far; Cusco, too touristy; Trujillo, too dangerous. 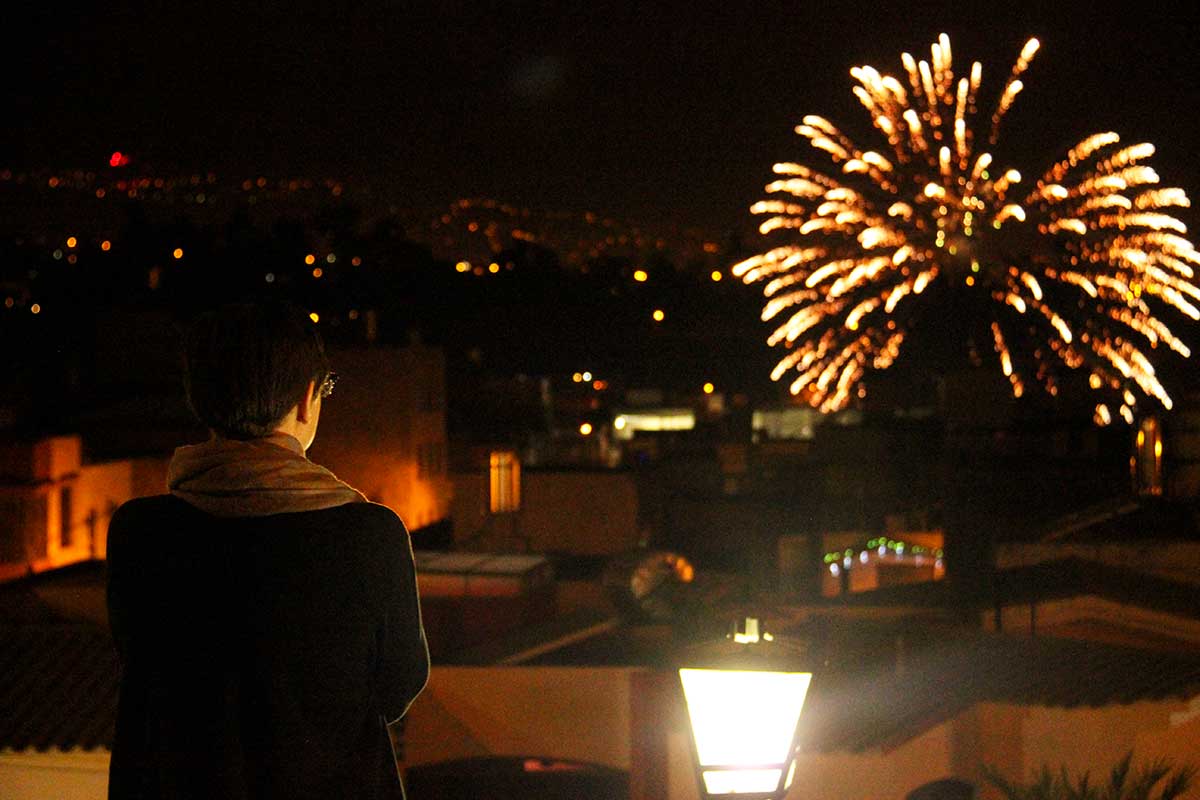 The author watches the fireworks in Arequipa, southern Peru.

Colonial Arequipa was perfect. We found a three-story attached house for rent (with free laundry and WiFi, fully furnished with a brand-new new stove, fridge and bed, for $590 a month; a kick to the groin of big-city Canadian real estate if ever there was one); it was just a block from the Plaza de Yanahuara, a major tourist spot on a gentle slope overlooking the brown, rugged Rio Chili, which flowed down from the defining El Misti mountain.

The trade-off to all this is that Arequipa is a sleepy city, its UNESCO-protected streets safe to the point of boredom, with many shops and restaurants shuttered by 10 p.m. We spent a lot of time in our living room watching Peruvian Netflix—which, by the way, still offers far more English-language options that its Canadian counterpart.

By Christmas Eve, we were both feeling a little homesick. We hadn’t yet met a core group of friends in Arequipa, and we’d found our jobs abroad more isolating than liberating. So after dinner, at around 10 o’clock, we strolled down to the Plaza de Yanahuara to see the lights lit up in all their splendor. Like the rest of Arqeuipa, the plaza was decorated for Christmas since November, with a straw nativity scene and two-dimensional fiberglass Christmas characters from which tinny 16-bit holiday jingles played repeatedly, day and night.

As a Jew, it felt weird. To my goyish girlfriend, it was a wonderland.

An older man approached us in the plaza. “Are you waiting for the fireworks?” he asked. “This is the best view in the city. I come here every year. The best view. Just wait until midnight.

I went home to grab my flimsy travel tripod and SLR and began playing with the bokeh cast by the myriad fairy lights. The older man sat on a bench next to a younger man; they chatted intermittently, as strangers in waiting do. We passed two hours like this.

The first one went off while I was snapping photos in the garden. It was 11:50. I looked at my girlfriend: “Already?”

After that initial burst, there was a moment of silence, broken by absolute mayhem—a rapid-fire blitz of fireworks coming from every direction, every angle; corkscrews, flurries, balls, stars, crescents; different colours, heights, distances. One went off 50 feet in front of us; dozens more were shooting off 500 feet away. All across Peru, we knew, literally millions of families were standing on their roofs, blasting tiny rockets into the sky, creating ephemeral galaxies that quickly evaporated into dust and blew away.

We rushed back to the lookout and stood there for 10 minutes, scanning the skyline, from the cathedral to El Misti, watching the explosive cascade rise up from the sleepy city. A million people firing a million fireworks. Newspaper headlines be damned. Suddenly, we weren’t homesick. We were too mesmerized to think about home. *

Wading Through the World’s Biggest Vinyl Market in Utrecht