Close, But No Toboggan | When It’s All Downhill in Camden, Maine

That time, years ago, when Outpost sent a team of expert sledders (otherwise known as Canadians) to compete in the annual U.S. Toboggan Championships in Camden, Maine. Costumes were optional.

An active human being can take only so many days of indoor confinement, [we all know what that felt like this year], before they are drawn outside to do something—anything!—and it was in this spirit of combating the domestic ennui of winter that my buddies Paul Aquilina [of Wellington Brewery], Chris Higgins and I found ourselves packed into a two-person pickup for the 1,000-kilometre ride from Toronto to the U.S. National Toboggan Championships in Camden, Maine, along the northeastern rocky shores of the United States. 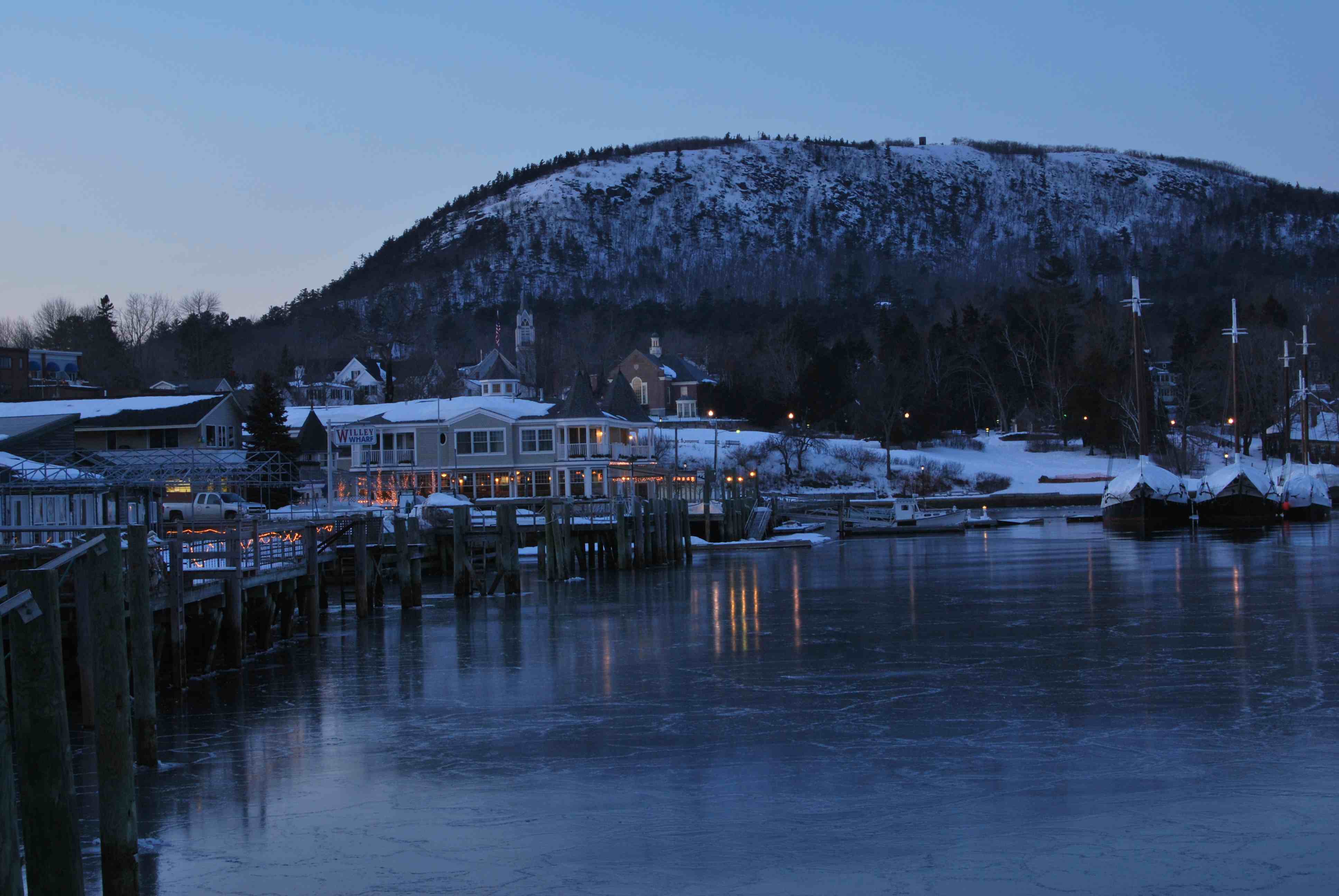 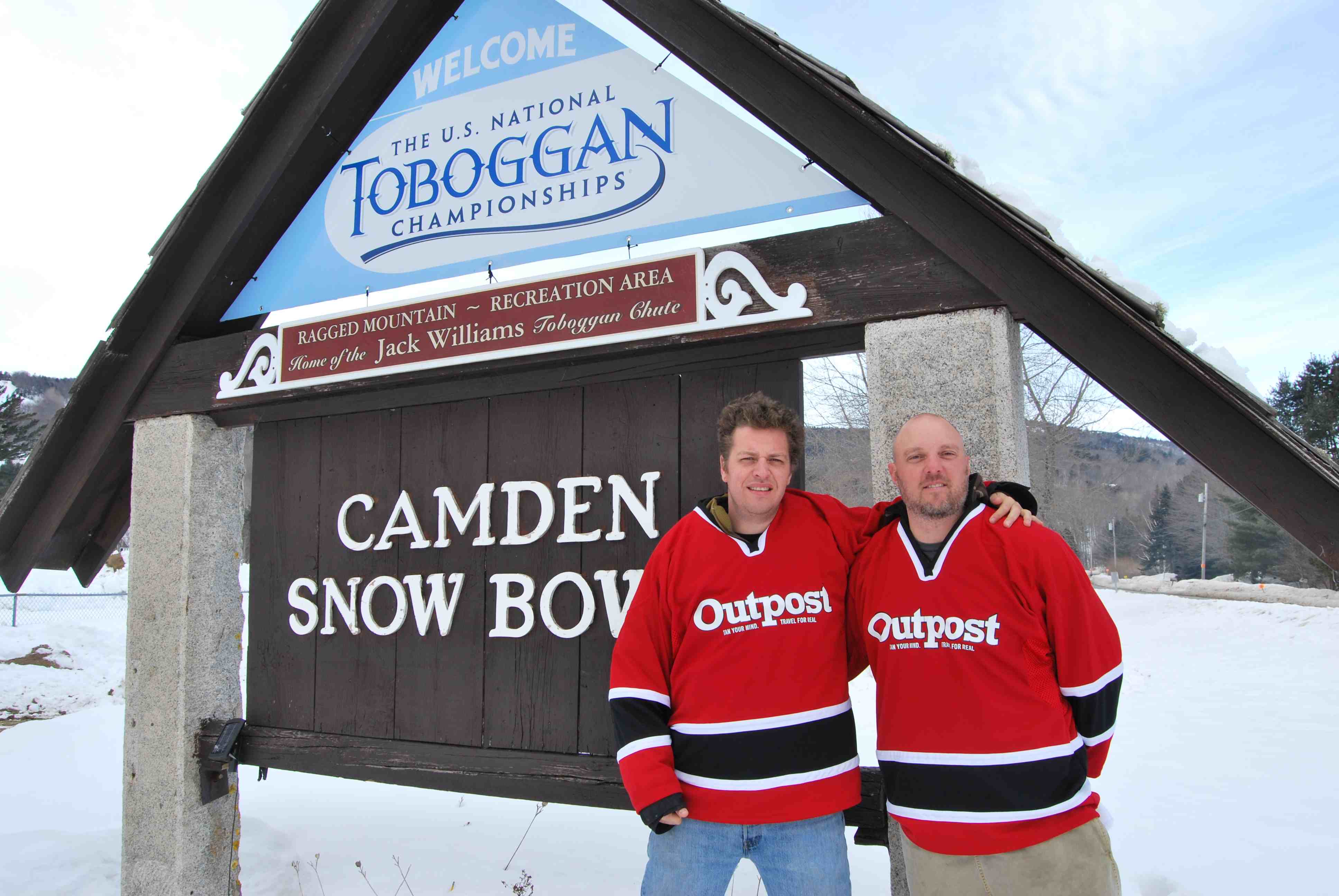 The author, and teammate Paul Aquilina, of Wellington Brewery in Guelph, Ontario. 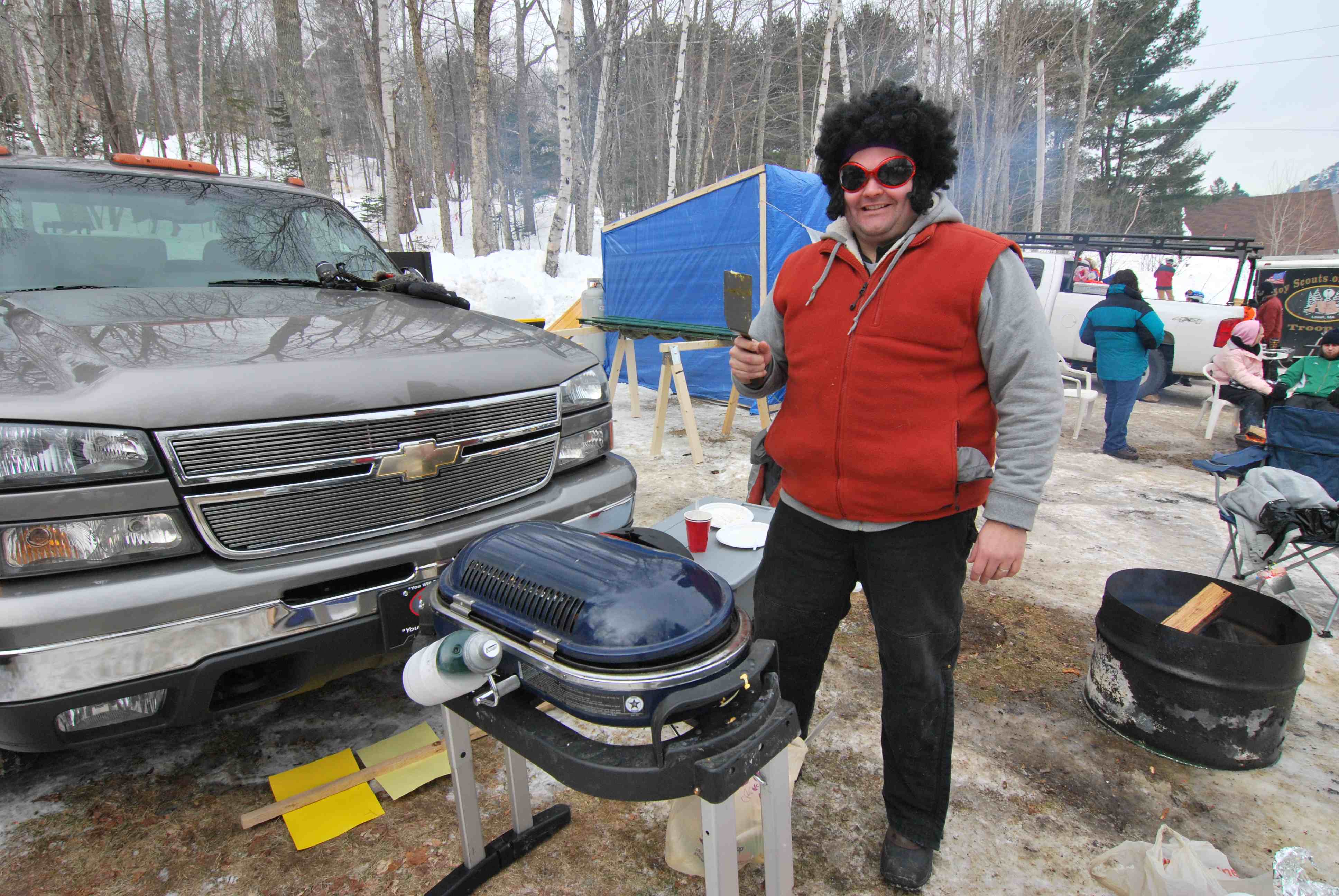 The championships rev up the region in the dead of winter, and bring in revenue for the local economy,

To many, a journey like this in early February would be met with aversion. But when Paulie asked about the prospect of tailgating with 8,000 strangers on a frozen pond while taking turns launching ourselves down a 45-degree plywood ice-trough, just for the possibility of being called “National Champion” at the bottom, I was in. 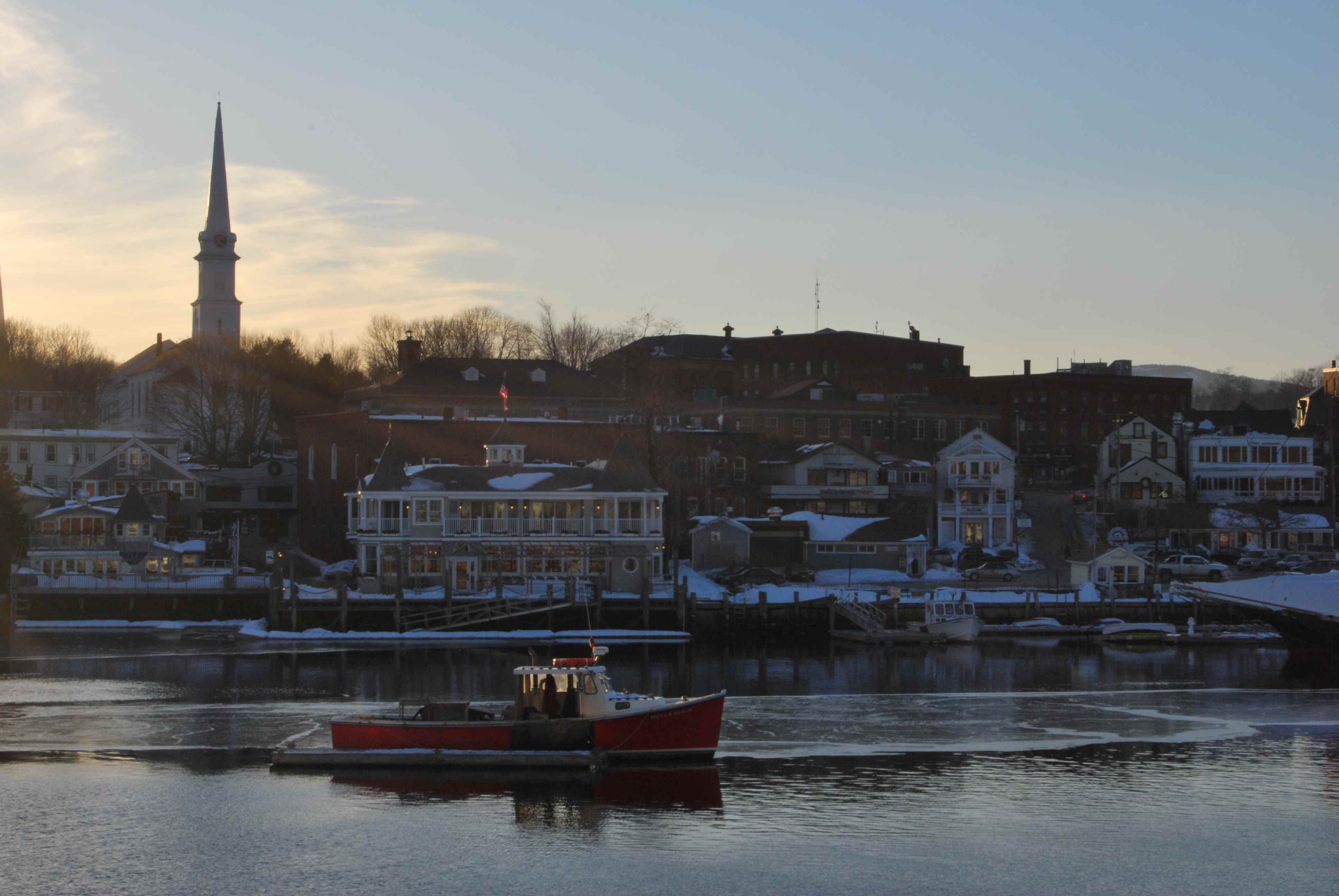 It’s worth the trip just to see bucolic Camden in the winter.

That our training need only consist of a few weeks accumulating as much body mass (fat!) as possible—employing the principle that mass equals speed equals championship (our eventual 141st placement is sad proof it does not!)—only made it easier to commit. Add to that the possibility of fraternizing with people who felt compelled to join teams named The Soggy Bottom Boggins, Fat Bloated Idiots, and Star Wars: Return of the Sledi, and our efforts were redoubled.

For anybody who’s ever lived in a northern climate (home, as we call it in Canada), the traditional wood toboggan is a symbol of our youthful defiance toward the worst winter throws our way. The more snow and ice deposits outside our door, the more likely we are to find ourselves strapped to anything anybody could ever use to slide down the steepest incline available. 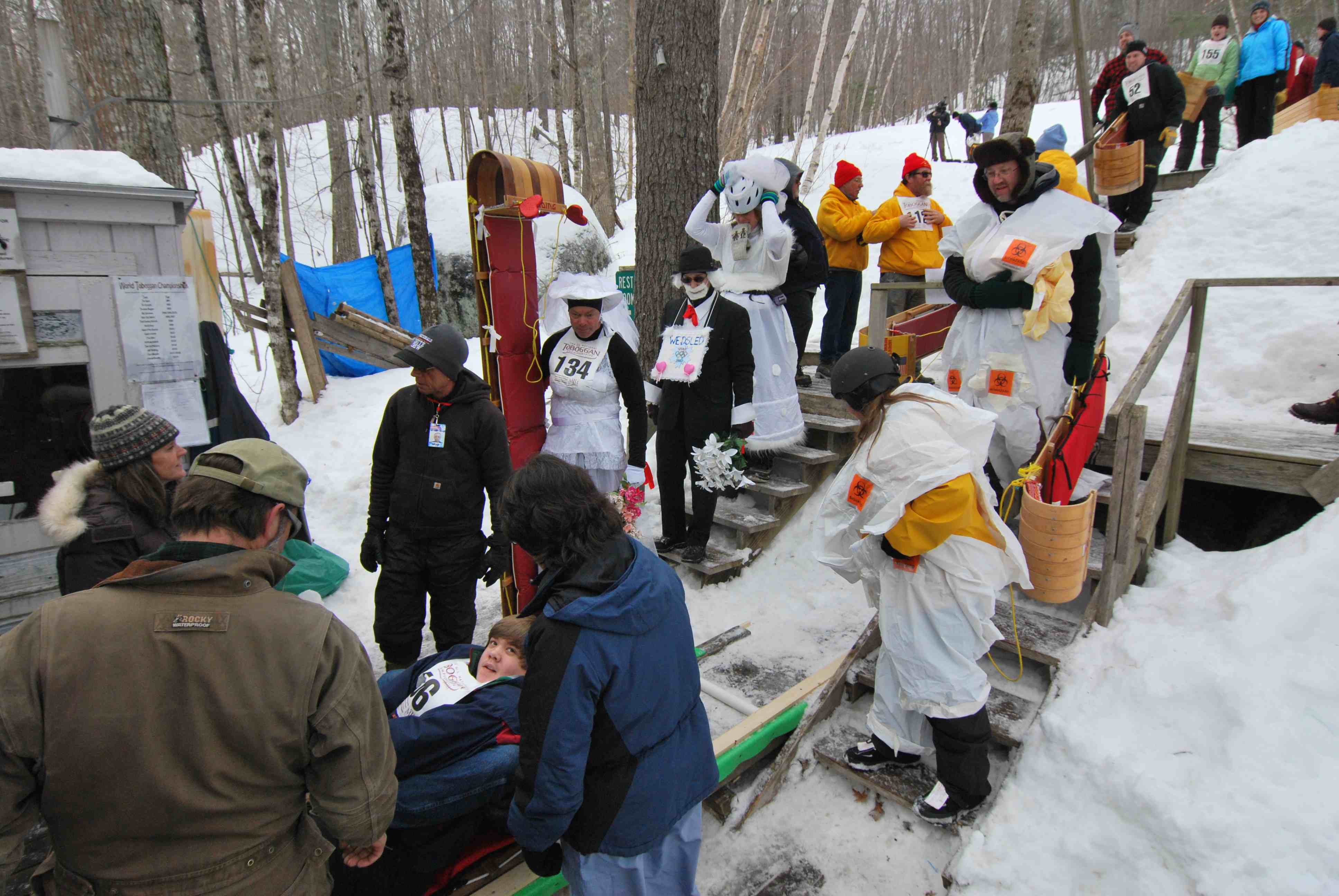 Competitors lining up for their turn.

It was in this spirit that the U.S. National Toboggan Championships was conceived in 1989 as a solution to the economic challenges faced by the municipally-owned and operated Camden Snow Bowl, a local ski and recreation area. While Camden has no problems attracting visitors to its spectacular ocean-scapes and cozy harbour streets in summer months (more than two million when the grass is green), it has struggled to attract winter travellers, who gravitate instead to the bigger mountains in the neighbouring Appalachian parks. 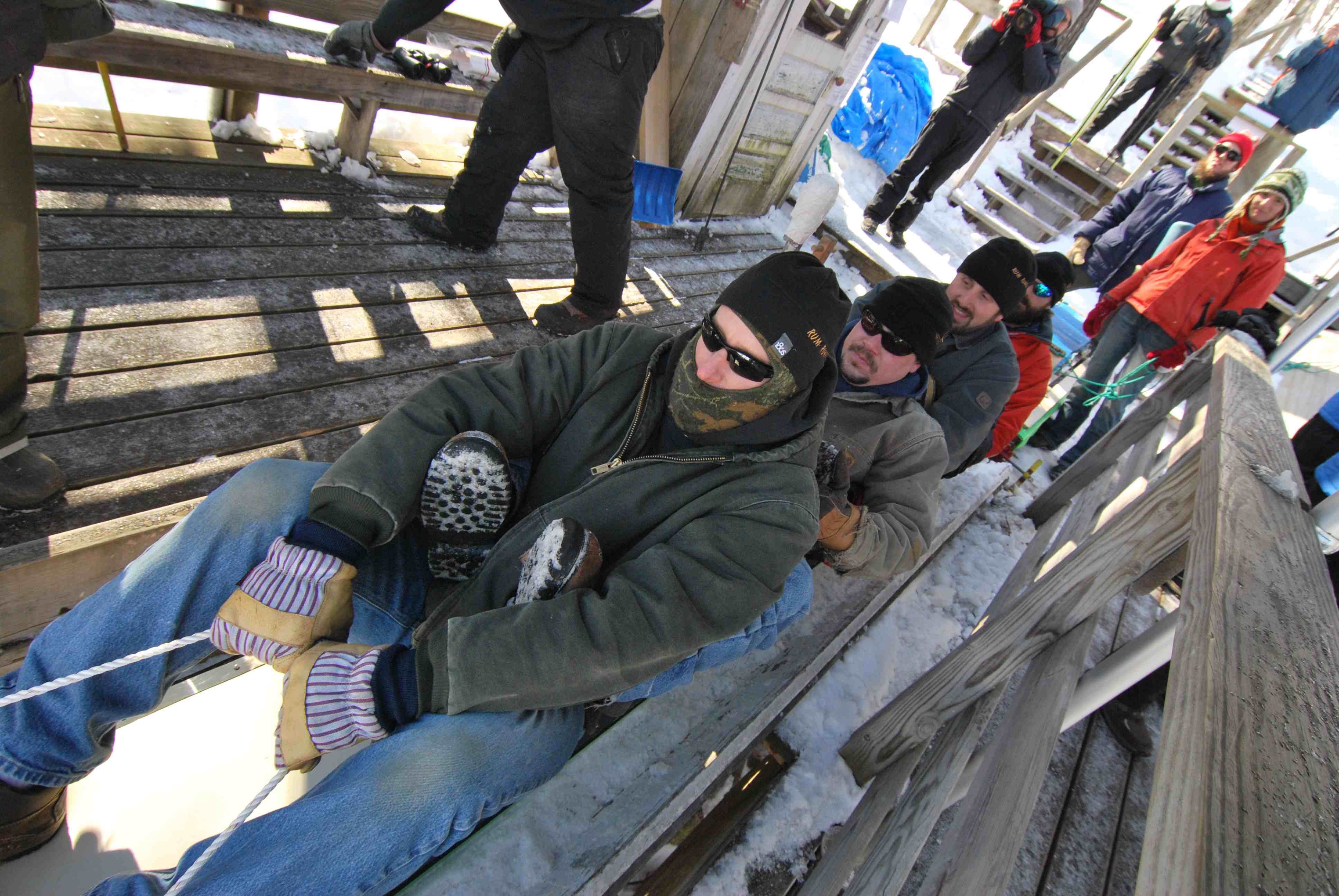 A team ready to launch; it’s all about the weight of the haul!

Utilizing the fallen carcass of a 1936 toboggan chute—a once-big attraction that became obsolete with the rise of alpine skiing in the 1950s—local Jack Williams built an entirely new chute as a way to attract more people to the hill. To further increase ridership, Jack, along with friend Ken Bailey, decided to create an annual tournament they designated the U.S. National Toboggan Championships, and in 1991 the inaugural event was held. 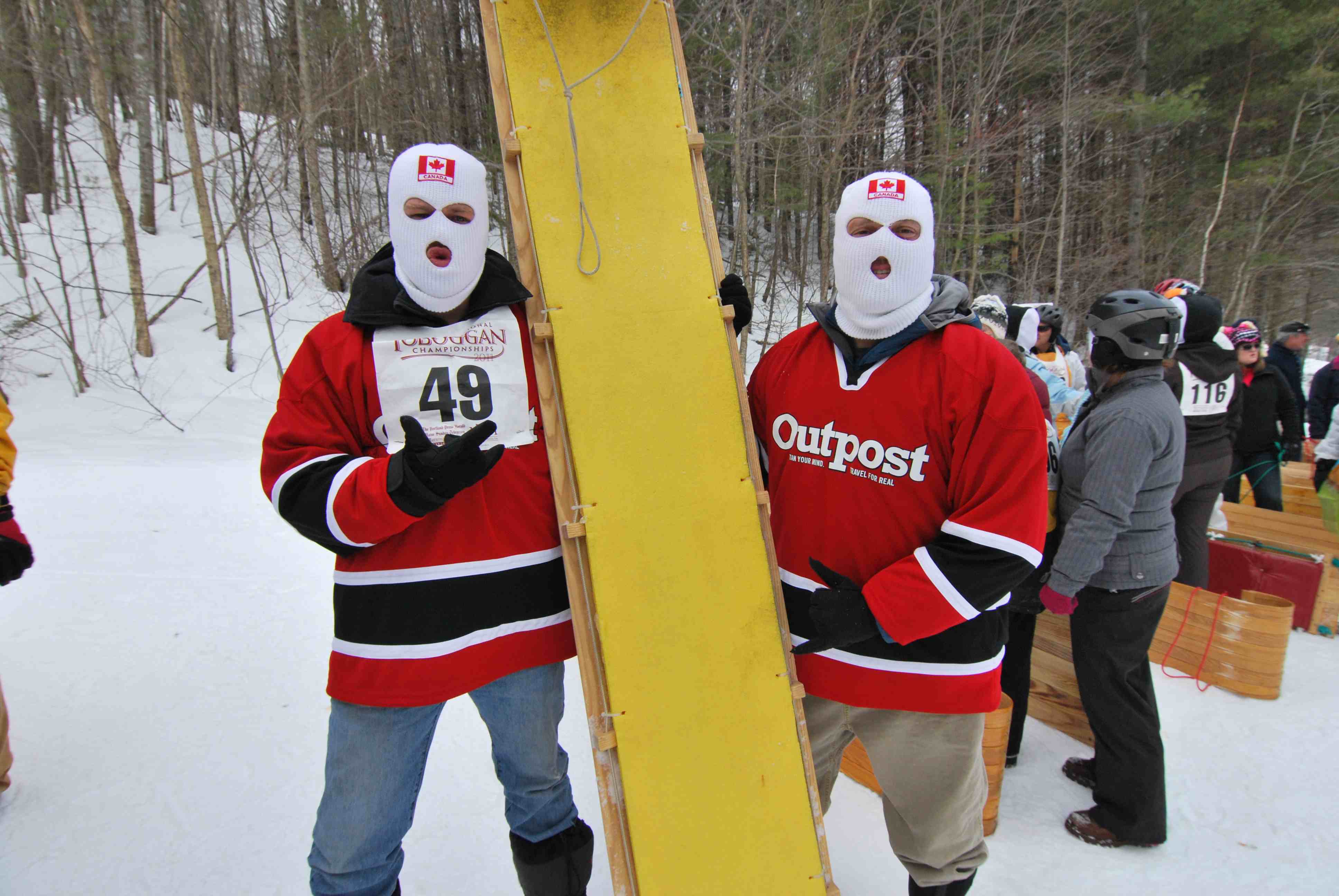 When I asked Ken how they earned the distinction of hosting the national championships, he replied, “To be honest, we just decided to call it that without checking with anybody. We’ve kind of been holding our breath ever since that nobody calls to tell us there’s already one.”

Probably not how the Olympics got started, but for a competition involving toboggans and tailgating, it sounds about right. Make no mistake, this event is a big deal for a number of people, and a hell of a lot of fun for the huge number of everybody else who makes the frosty pilgrimage to sled, eat, drink and wait to sled again.

Among the big-deal folk are the reigning Royal Dutch Toboggan Champions (also known as the only competitive team in the Netherlands), who made the trek from Holland to compete, while each was dressed like the Heat Miser from the 1970s claymation movie The Year Without a Santa Claus (go ahead, Google it!). 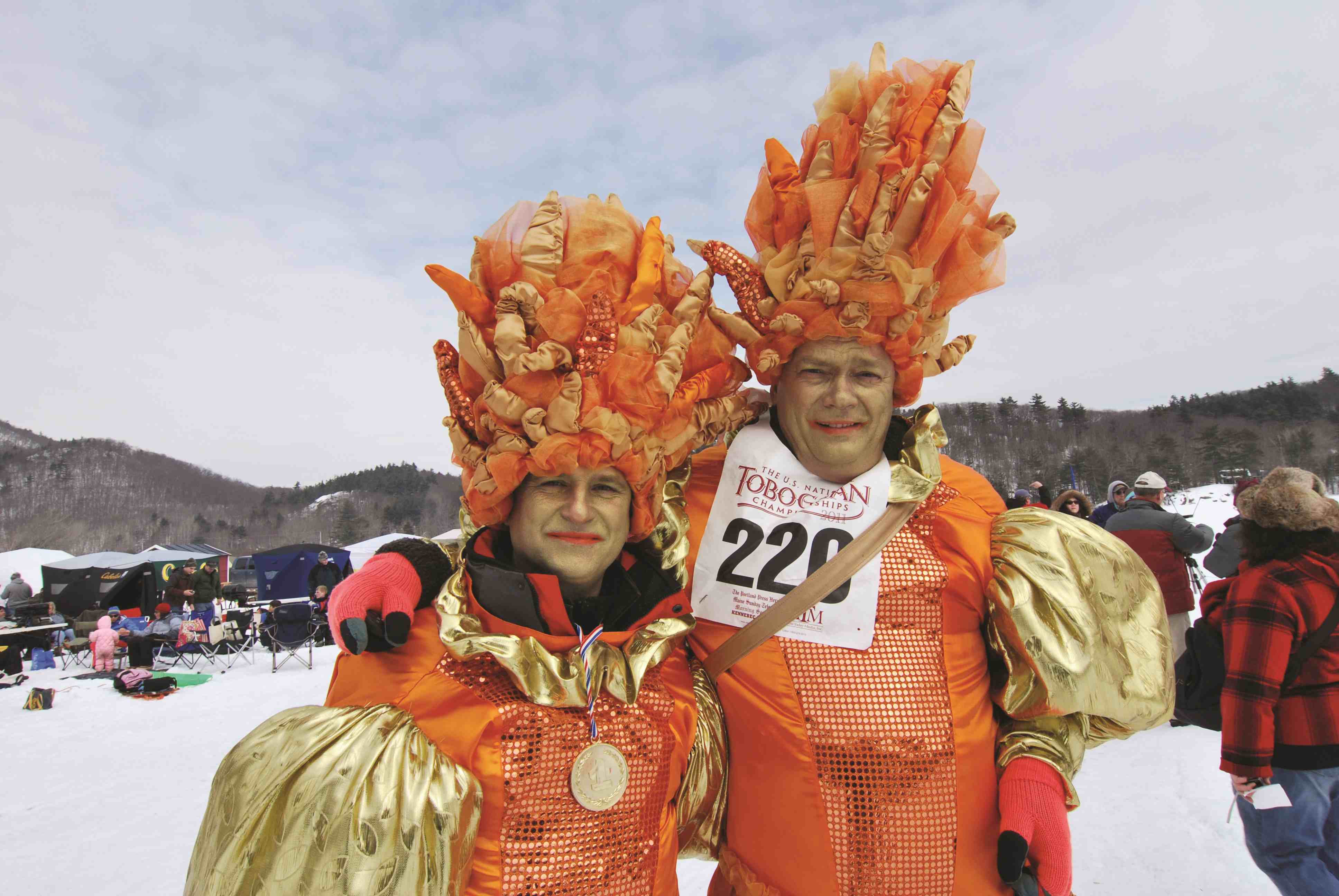 The Heat Misers, from the Netherlands, take the crown for best costume.

But the big prize for them, and I assume others—like the aforementioned Sledis, dressed as C-3PO, Luke, Leia and Darth—was the trophy for most outstanding costume, increasingly the most coveted title of the weekend. The Dutch took it for the second year in a row. 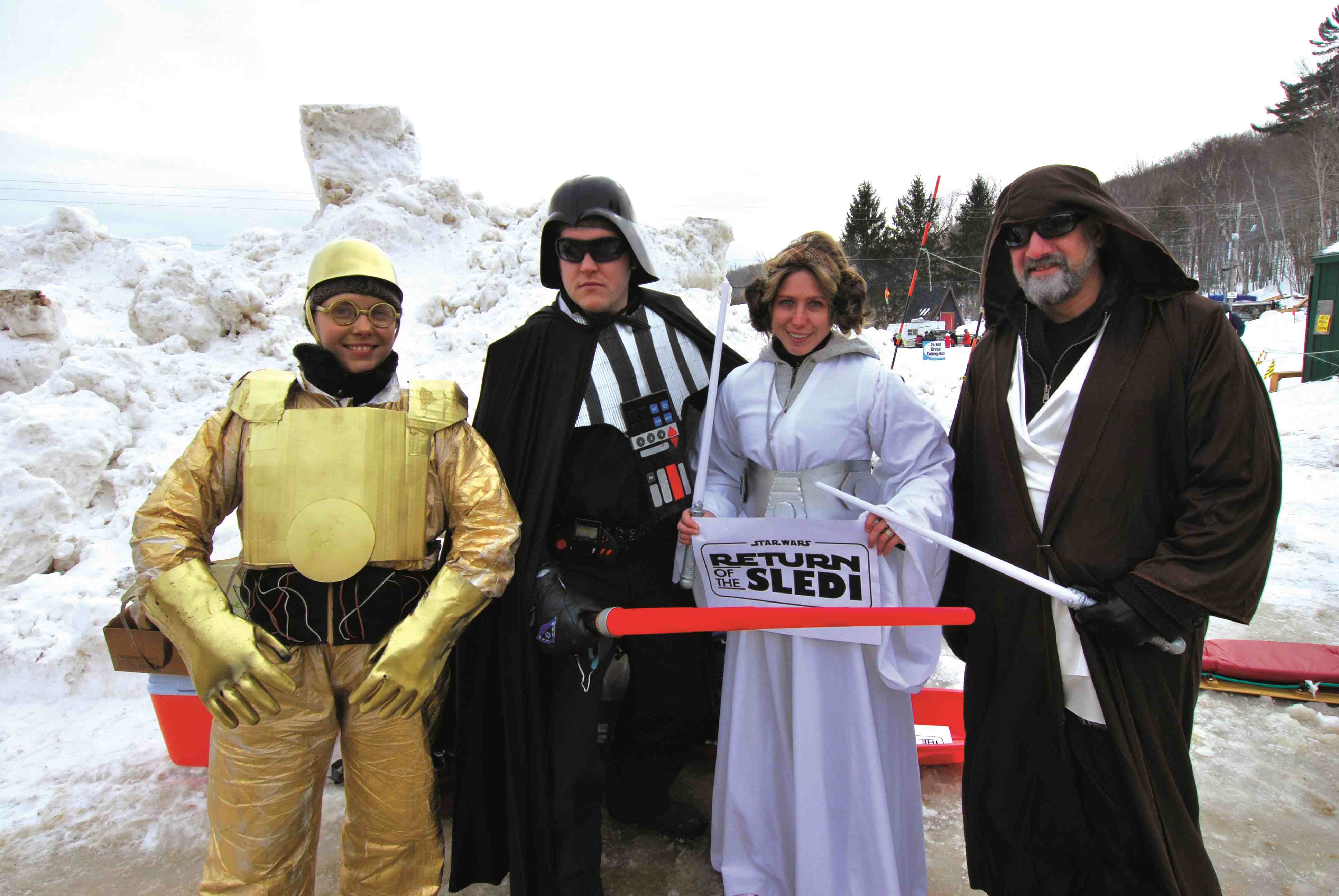 After a preliminary day of practice runs and technical design inspections (our first clue we might not be podium bound), we arrived on a below-freezing overcast Saturday for our qualifying runs in the two-man category. The technique is pretty simple—the one in front grabs onto the rope, while the person behind frog-wraps their legs on the one in the front and lays back, prone, along the end of the board.

The toboggan is then dipped from above into the frosty chute via a five-metre teeter-totter in the same disturbingly elegant fashion they once dunked accused witches around these parts. 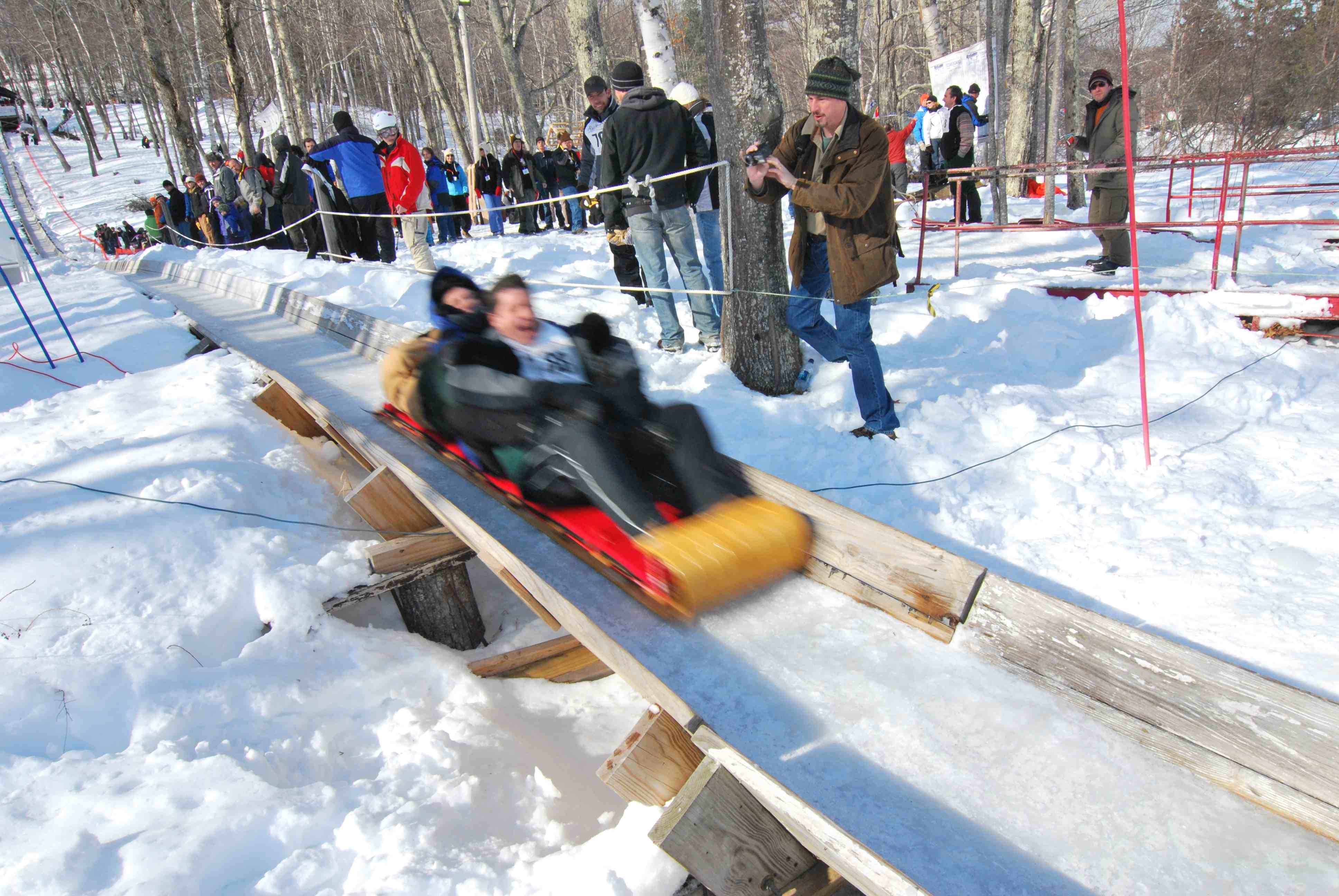 A team heads down the track with hopes of glory ahead.

After that, it’s pretty much hold on (for me, in the back) and try not to go into traction while your back hammers every bump and imperfection at 65 kilometres an hour (for Paul, in front), until you’re ejected at the bottom and skid wildly atop a glassy pond while an announcer cracks one-liners all the way down. Then it’s get up, grab your sled and back to the top for another go. 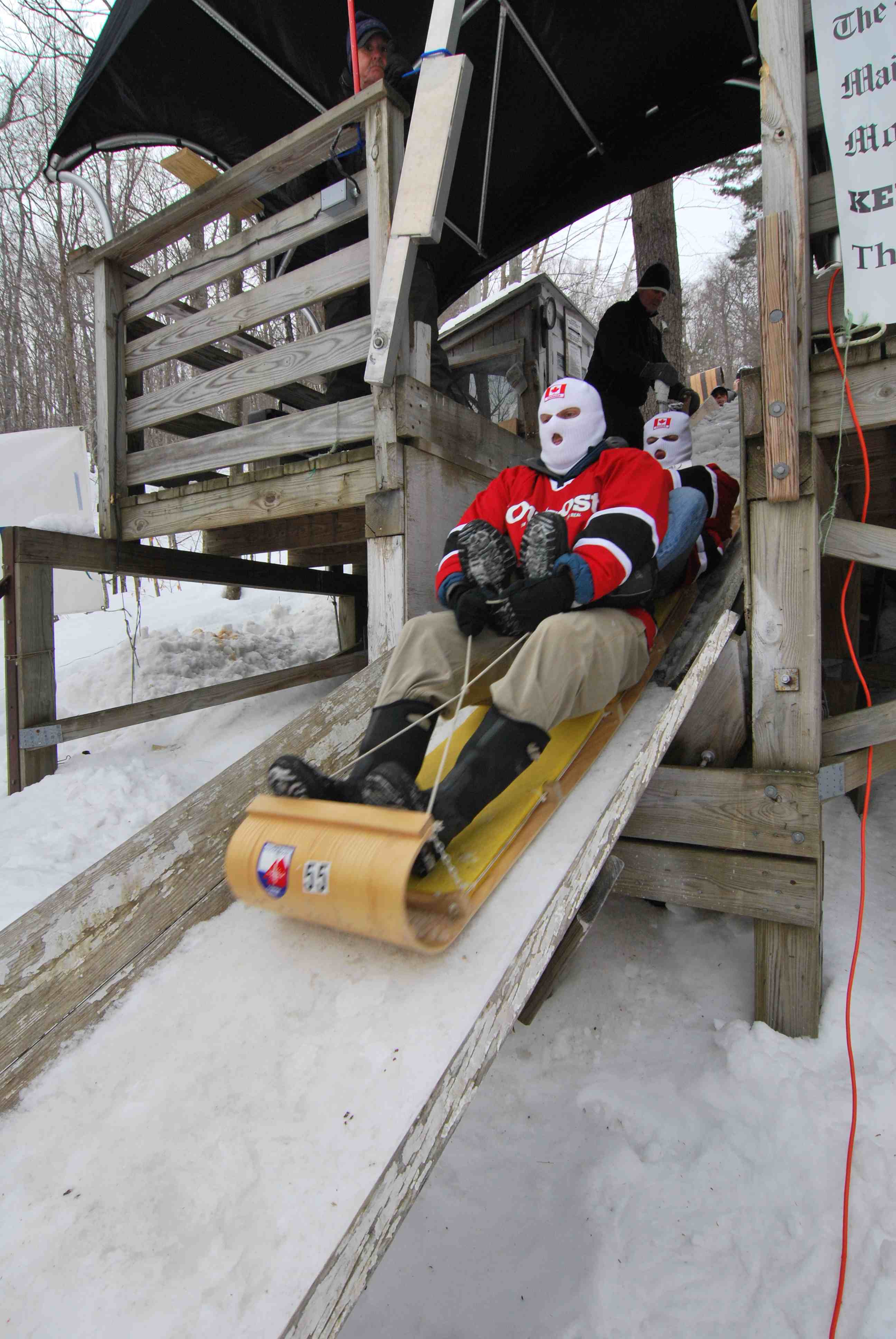 Team Outpost at the top of the chute: Paulie in front, Steve in the back!

The event, as it exists today, has moved well beyond what even Jack could have wished for. With teams coming from as far as the United Kingdom and sunny Arizona (whose members were inundated all weekend with the simple question “Why?”), the event brings in large support not only for the Snow Bowl but also Camden itself. More than a hundred volunteers participate, along with a number of local businesses who set up stalls to hock everything from maple syrup to chili to log homes.

[Editor’s Note: According to Camden Snow Bowl, as of 2020, the annual event has grown to become a significant economic driver for the region, ”with thousands of racers and spectators trekking to town during the shoulder season,“ and revenues from the event topping “as much as $90,000” annually in recent years.] 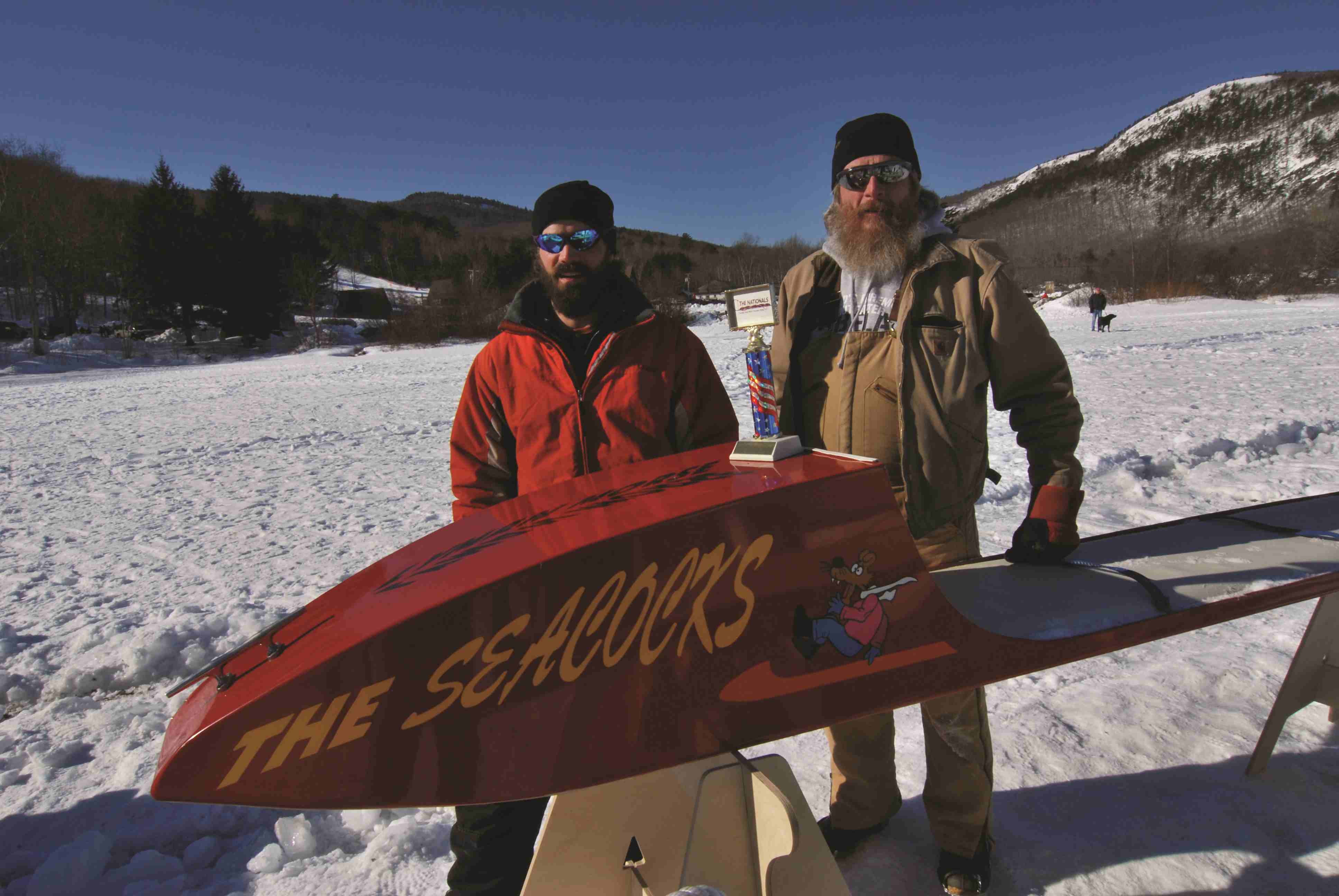 The championships definitely attract hardcore fans intent on winning in the two-, three- and four-person team categories, most of whom bring an arsenal of colourful, hand-built sleds that are displayed in complexly erected “headquarters” to better broadcast their commitment. Many had backgrounds in shipbuilding and engineering, and almost all in this calibre had crafted their own sleds, some waiting until the day of qualifying to assemble them. 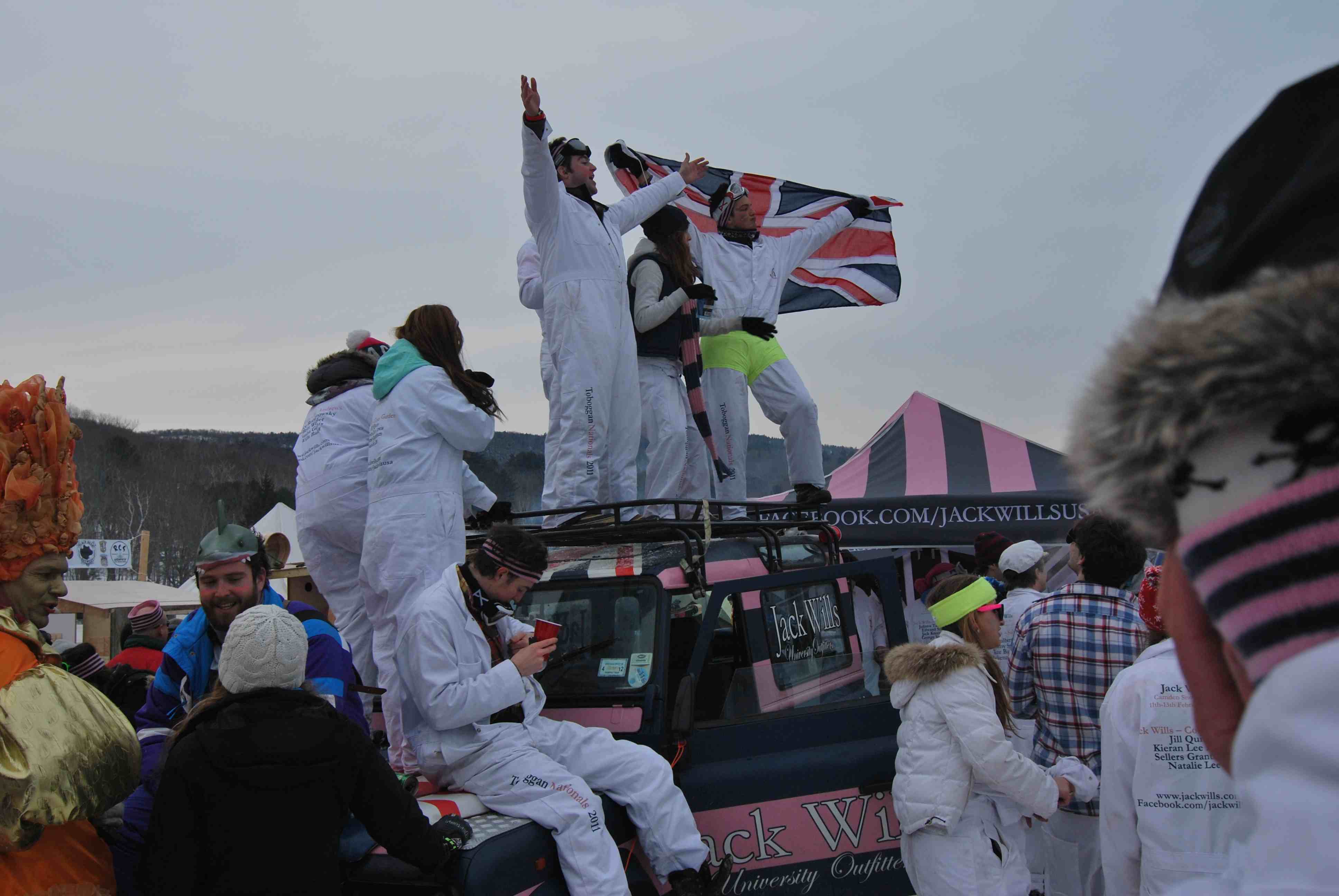 It’s hard to describe the enthusiasm generated by the event in the dead of a cold, Maine winter.

But, by our guess, most in attendance were there for the camaraderie, the tailgating, the fun people have tossing themselves down a frozen excuse to get outdoors and enjoy our planet at its glacial best. ♦

T’is the Season to Give the Gift of Travel | From Tours to Tickets, Vouchers to I.O.U.s

7 Questions for Intrepid Travel | Does a Year of Lockdowns Make Future Travel the Ideal Gift?