This is a guest post from Tan Your Mind, Outpost’s web series in Thailand. Click here to see more.

“Travelling is the antidote to ignorance… It changes your mind. Your perspective. How you believe. What you believe. And one of the greatest things you can do when you travel is travelling to a country where they don’t speak your language—that’s probably my favourite thing. Going to a place where they don’t speak English just so you can realize how insignificant you really are. You’re not the centre of the universe.” – Trevor Noah, Are You Afraid of the Dark

The year was 2010. I had just left my mum behind at Toronto’s Pearson airport. Teary eyed but bushy tailed, I was taking my first steps into the unknown on my first-ever trip away from home, my parents, my illusion of safety.

I arrived in the pre-clearance and handed my passport over to the border security for inspection.

“Vietnam.” He paused, looking up from my passport, regarding my flippantly.

“You’re going to get kidnapped in Vietnam.”

And with that, he passed me back my passport and shuffled me through, as I struggled to pick my jaw up off the floor.

I get where his warning came from: we fear what is different. We fear the unknown. We fear what we’re taught to fear: strangers, the dark, holes in the floor, clowns on stilts.

Fast-forward eight years and 20-odd countries, and while I’ve been happily ripped off hundreds of times, I’ve yet to be pick-pocketed, let alone kidnapped. In fact, any time I’ve felt an ounce of fear while travelling, it turned out to have been misguided.

For example, the time we missed our train to Kanchanaburi.

On a very basic level, what I felt in that moment was fear: fear that we were going to pay an exorbitant amount for a taxi, fear that something would happen to the thousands of dollars of camera equipment we were carrying and, of course, fear that we would miss capturing a pertinent part of the story—in other words, fear of missing out.

And yet, in reality, our taxi driver was a jovial man who sang to us for much of the journey, charged us fairly and, in fact, did more than his due diligence when it came to keeping us and our belongings safe. Our lenses were as snug as a bug in the trunk, placed gently next to exposed car innards, secured by a series of makeshift vinyl bungee cords. (He did his best!)

Again I felt fear as we shredded cement in our truk-truk, pulling death-defying overtakes around mountain switchbacks at 150 kilometres per hour. Clutching my seat and the rod above my head for dear life, I thought: “This is gonna be the drive that kills me.” 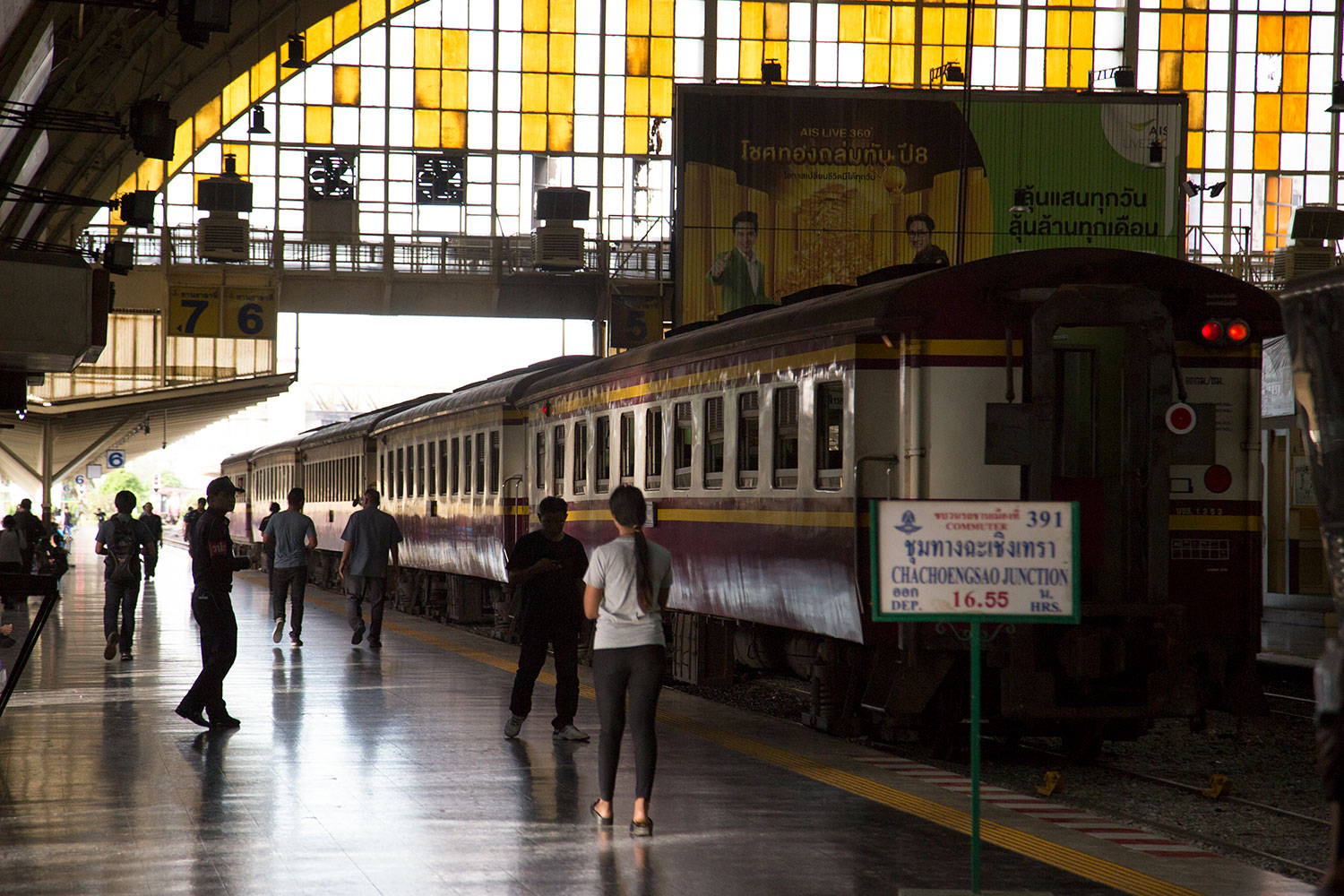 And yet, in reality, when we expressed our fear to our driver, he turned out apologetic. He then waited until we were finished visiting Chalermprakiat (three hours!) and drove us back down the mountain, and bought us strawberry-flavoured soda, strawberry candies and a container full of strawberries (it’s a popular food, I guess), all ostensibly to apologize for his precarious driving. I should note that we paid him in full, so I don’t think his kindness was financially motivated. I think he genuinely cared.

Learning to read the Thai around our bracelets with Grandma Poon, how to cook with Win, how to craft leather with Sung—all these stories that we’ve shared so far, they’re examples of people who went out of their way to get to know us and share their culture with us. Win even took a day off from his restaurant. Think about that: he took a day off work to show people he’d never met before a piece of his country because he wanted us to see “his Lampang.”

Perhaps it is just luck or smarts or both, but anytime I’ve been in a land where English isn’t the first language, I’ve always been afforded this courtesy and found a way to connect that transcends language barriers. My grandfather passed away when I was in Bali, and I was consoled, empathized with and felt for like a family member by the locals I’d met. When I was rendered immobile by mosquito virus in Nicaragua, I was cared for and brought back to health by two women who lived near by. These experiences have led me to believe that the world is not as scary a place as you might think it is, that the human default is kindness.

Of course, when you’re travelling, be careful. Don’t carry large sums of money. Give it up if you have to. Make good decisions. Let someone know where you are. Be wary. Don’t trust blindly. But know that people are inherently good. 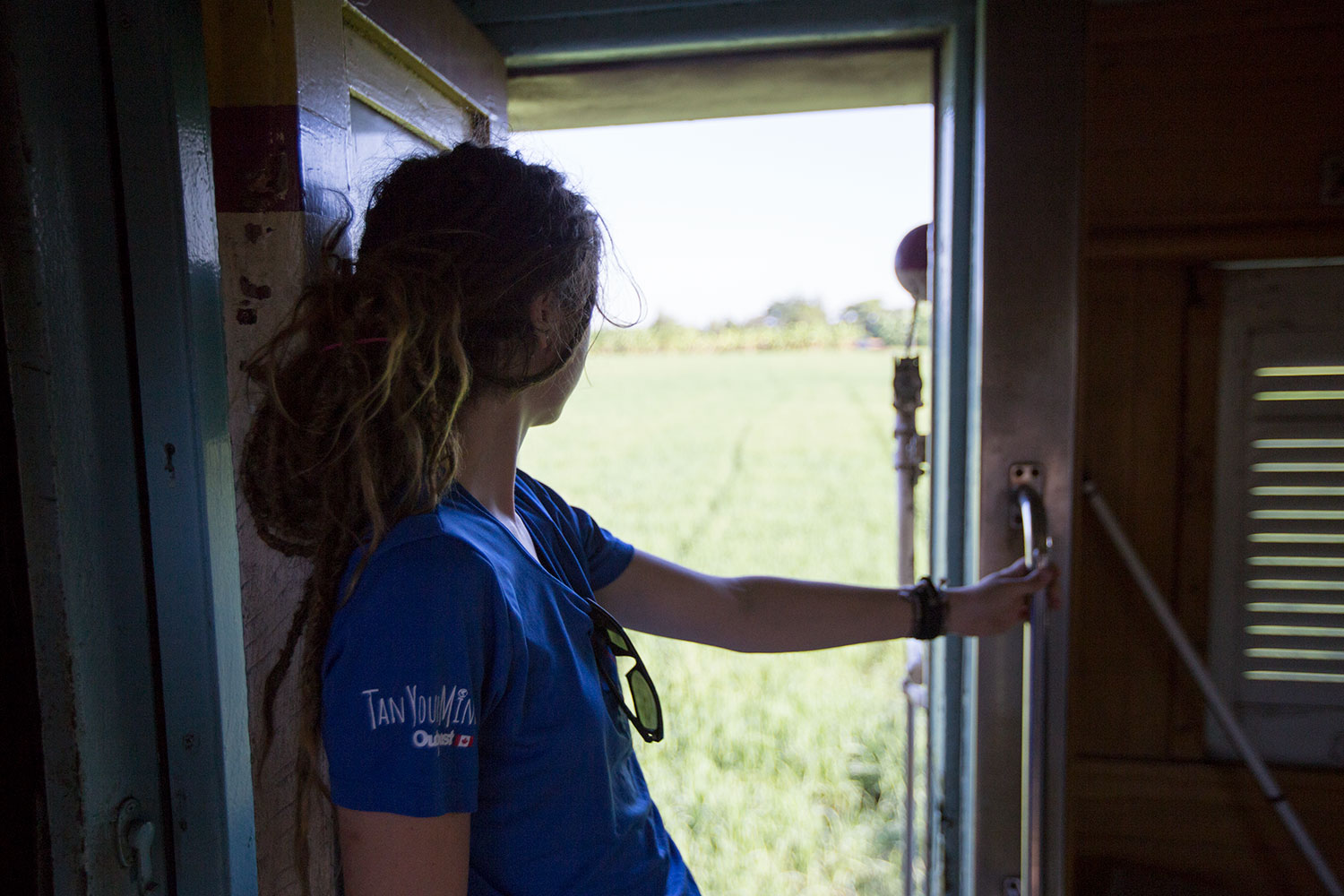 Perhaps that misguided border guard had never left the country, or had a bad experience, or a family member in the Vietnam War. But in a time of immigration bans, fear politics and “us versus them” rhetoric, travel is one of the most important things you can do. It has the habit of doing away with stark definitions of “otherness” based on passports, skin colour, language and religion. It forces you to feel fear based on unfamiliarity, because it forces you to trust in the goodness of strangers, to find commonalities that go deeper than the immediately obvious.

While fear is a natural impulse, so is love. So I say travel more, fear less and get curious about people and customs and cultures that are different.

Unless you see a clown on stilts. In that case—run.

Lena is professionally, personally, and sometimes even while sleeping a digital storyteller. Outpost has sent her to hike Canmore, cycle Quebec and explore the best of Thailand in its new Tan Your Mind web series.

This Week in Travel News: An Entire Country is Now Free on Airbnb