Crazy Buzzing Capital—Is There Any Other Way to Describe Modern Lima?!

Pre- and post-Columbian history, museums and adventure sports, a solid gastronomical scene and crazy-amazing vibe. There’s all that and more in Peru’s modern capital!

While Lima’s rich colonial past is evidenced by baroque architecture hidden among skyscrapers throughout the city, its lavish buildings and extravagant balconies are most notably concentrated in the UNESCO-protected historical centre. The Plaza de Mayor—also called the Plaza de Armas, which literally translates to weapons plaza—served as a gathering place as well as a place of refuge and defense in the event of an attack. I guess it didn’t hurt to be prepared!

Modern Lima was “founded” (to use the now-questioned colonial term) in 1535 as the City of Kings, or Ciudad de los Reyes, in honour of the Christian holiday of Epiphany by Spanish conquistador Francisco Pizarro. Its proximity to the Pacific Ocean and year-round temperate weather beat out the original inland and less popular choice for a capital of Jauja. 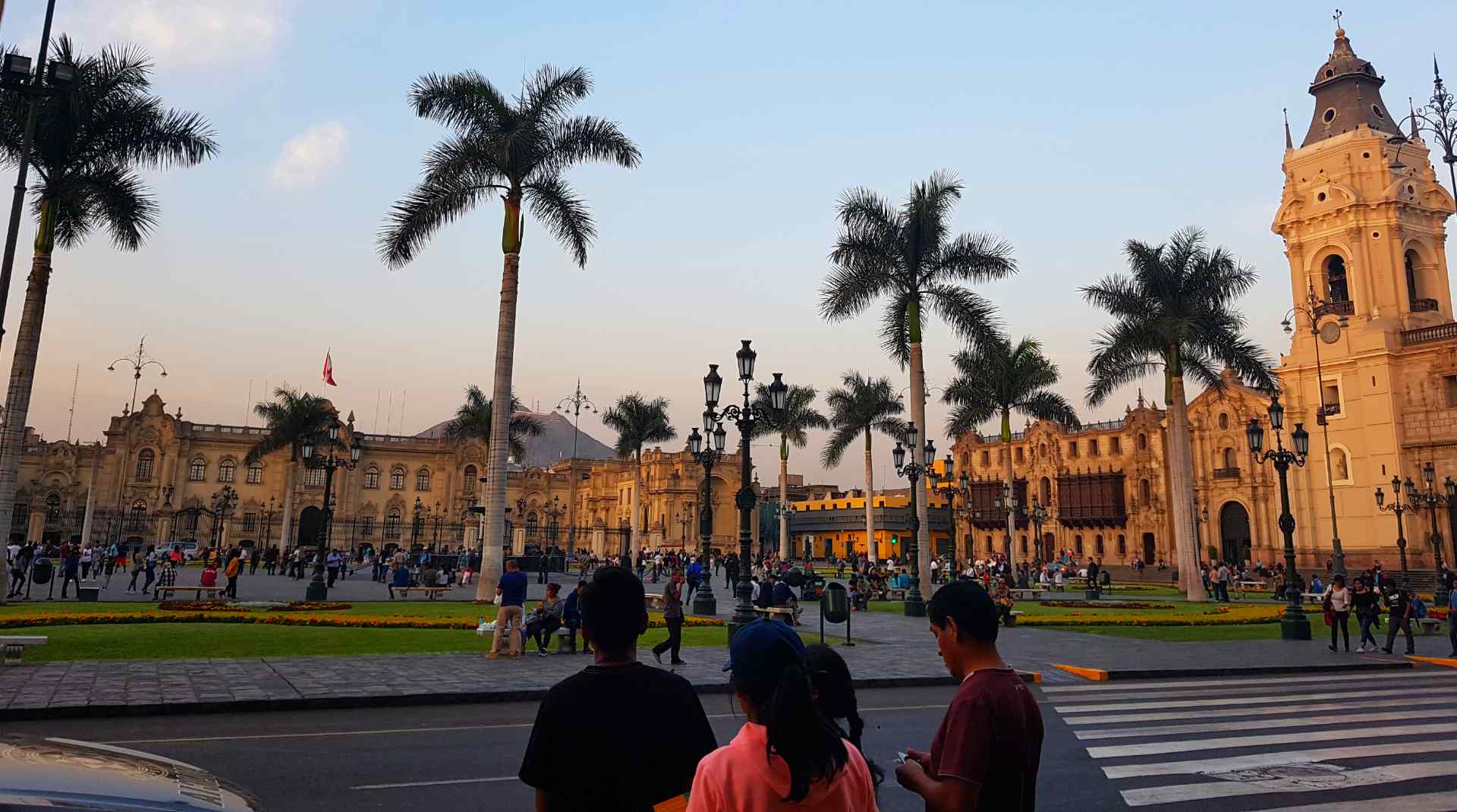 Lima’s weather, in fact, is fantastic: located on a strip of desert plain between the Pacific Ocean and the Andes, and affected by the cool Pacific Humboldt Current, rainfall is slight throughout the year and temperatures typically range between 12-15 degrees Celsius at its lowest to 24-28 C at its highest. Very, very nice.

I distinguish between modern and ancient Lima because in fact, a pre-Columbian people and civilization occupied the area for what historians believe were thousands of years before the Spanish arrived. And as the Spanish conquerors were wont to do, they built Christian churches and colonial monuments on top of existing structures as a symbol of domination. 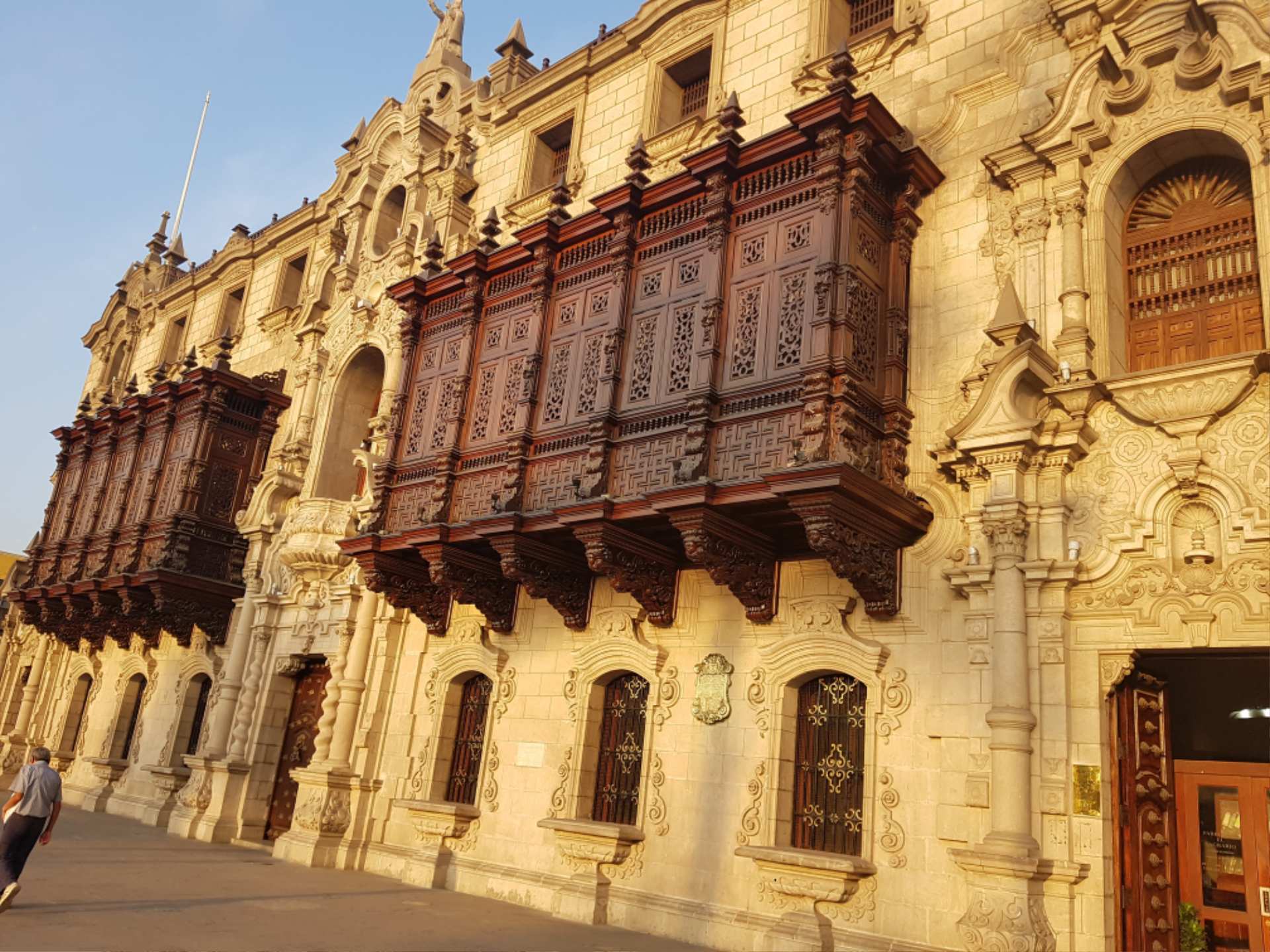 Don’t miss the baroque details, especially the balconies around the plaza.

The city was once very richly adorned, housing several Andean-silver funded mansions, churches and roads. During the years of Spanish colonial rule, as the capital of the Spanish vice-royalty in the Americas (a territory that spanned Peru, Ecuador, Chile and Bolivia), Lima survived (the usual) pirate threats and earthquakes (it’s located on the Pacific’s infamous Ring of Fire), and flourished economically, becoming an important trading center for Europe (silver was a primary export).

Eventually, Lima became the capital of the newly formed republic of Peru in 1821, and its independence was proclaimed in the main plaza. Viva el Peru! 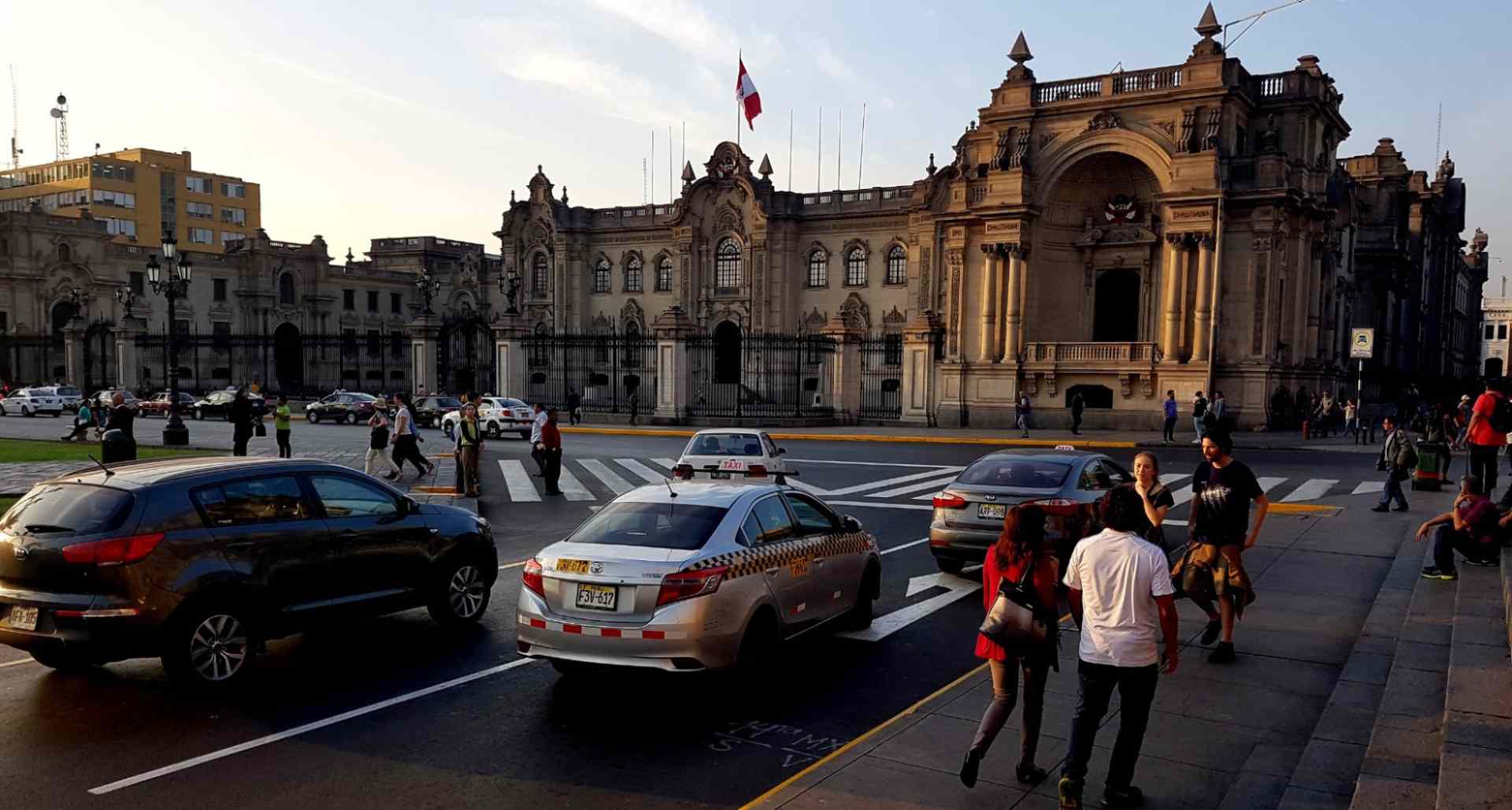 Similar to other Latin American examples, Lima’s central plaza is surrounded by important buildings: the Archbishop’s Palace, Municipal Palace and Government Palace, where Pizarro himself once lived. Pizarro’s old home is known today as the Presidential Palace because it’s the official residence of the current Peruvian president.

The Presidential Palace was built atop pre-Columbian ruins that likely date back 2,000 years. From the center, wealthy Spanish conquistadors built mansions on the prime real estate radiating from the plaza, many of which are preserved. Centuries ago, Lima was a walled city—but the wall was torn down when the city began expanding. 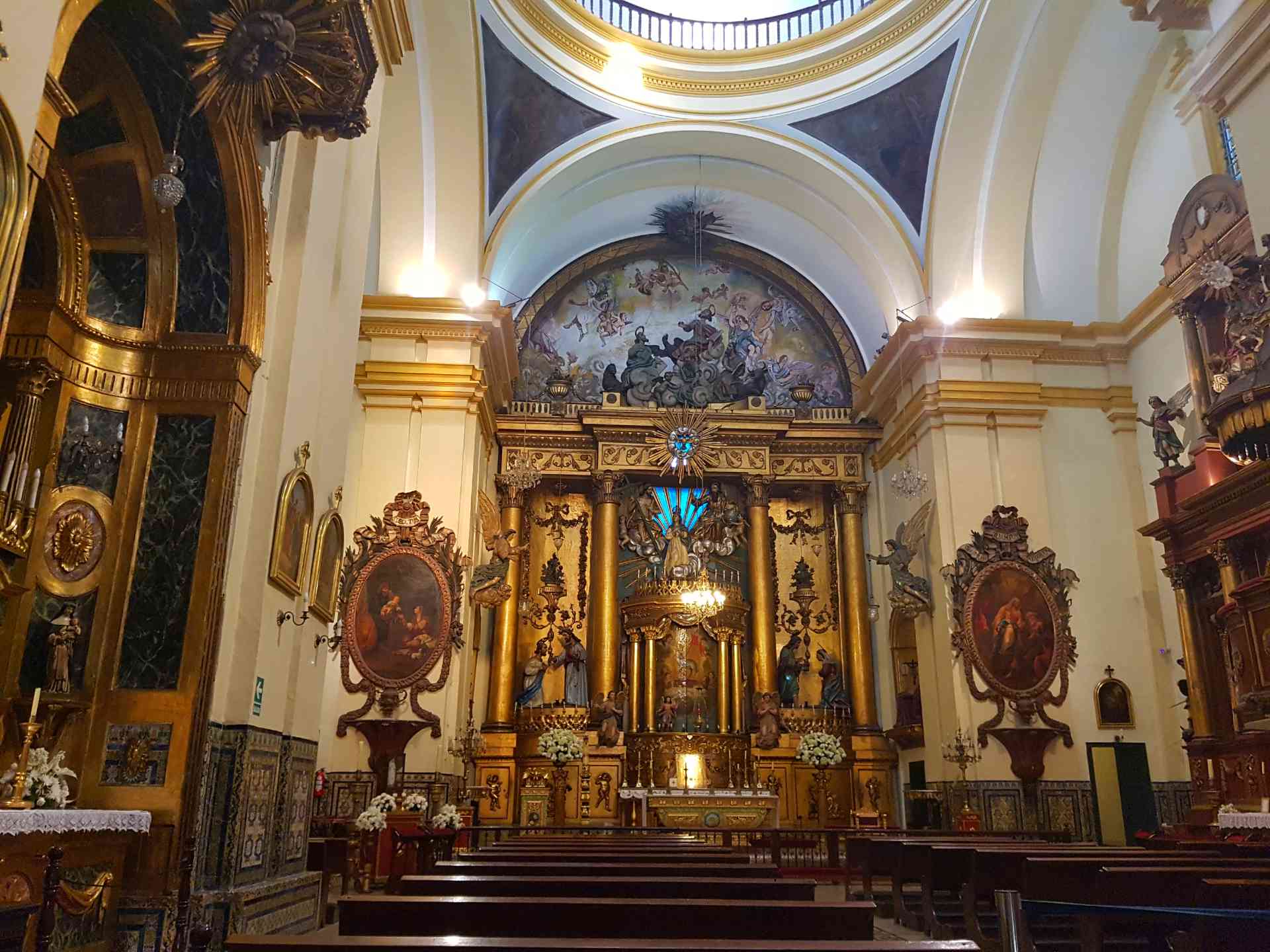 Spanish colonial architecture of the Historic Centre of Lima.

Walking distance from the city center you’ll find Muralla Park, with a bronze statue of Pizarro (the conquest is a complicated topic, though the man most associated with it gets his own statue). The park is on the outskirts of the city’s center and remarkably, ongoing excavations are revealing part of the old city walls.

Further along, you’ll hit the central market, lined with maze-like galleries and merchants selling everything from fresh fruit to knock-offs to fine handcrafted silver jewellery. Within the city limits you’ll find Chinatown—known as Calle Capon, or Barrio Chino. (Lima has the largest Chinese population in South America.)

Chinese immigrants began flocking to the city in the 1850s and the area grew substantially when import companies began basing themselves there. Here you can indulge in a chifa, a sort of Peruvian-Chinese fusion food buffet, enjoy a Chinese traditional festival, temple visit or shopping spree, all with a Peruvian twist. 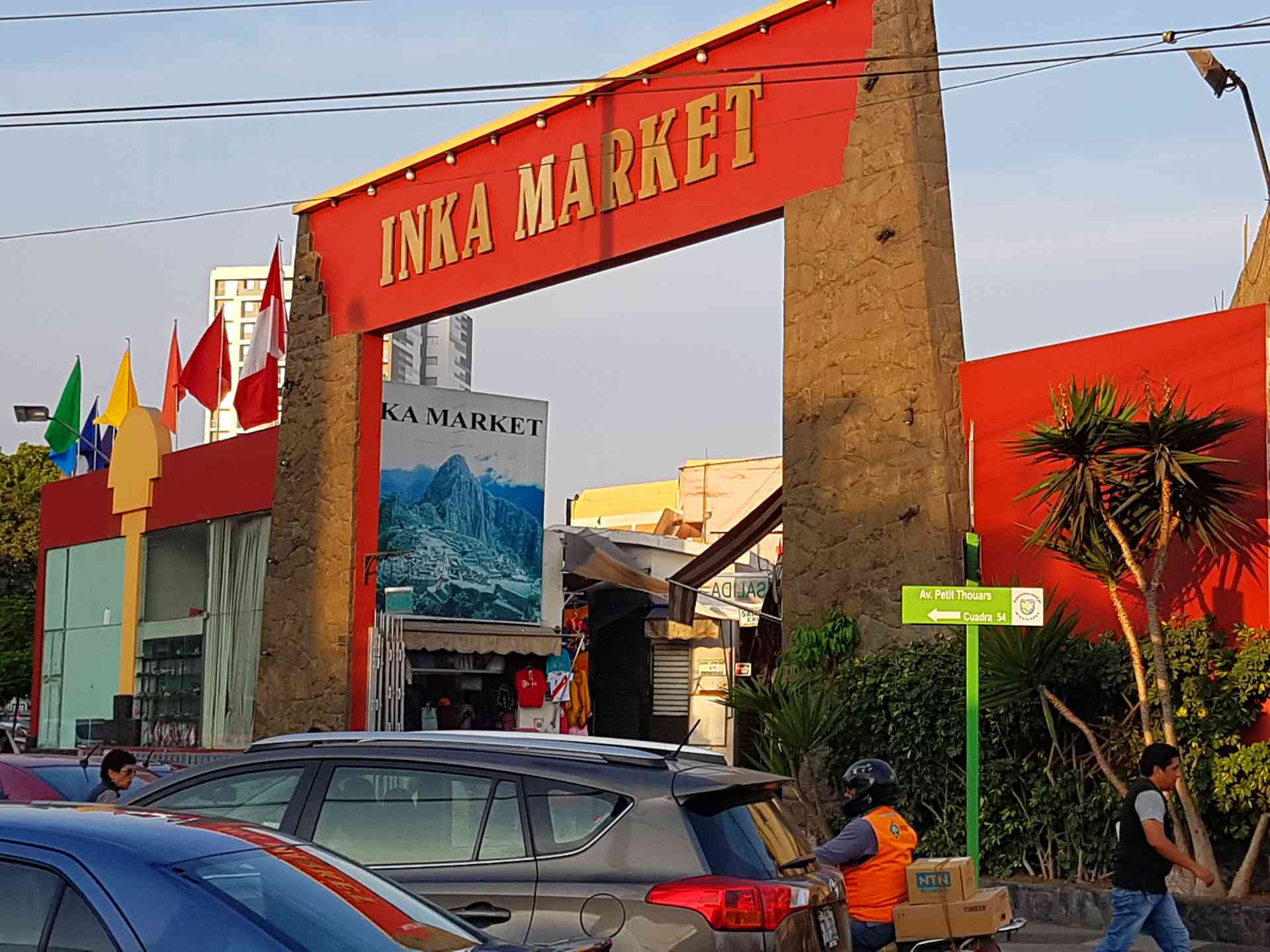 The Inka Market in central Lima. 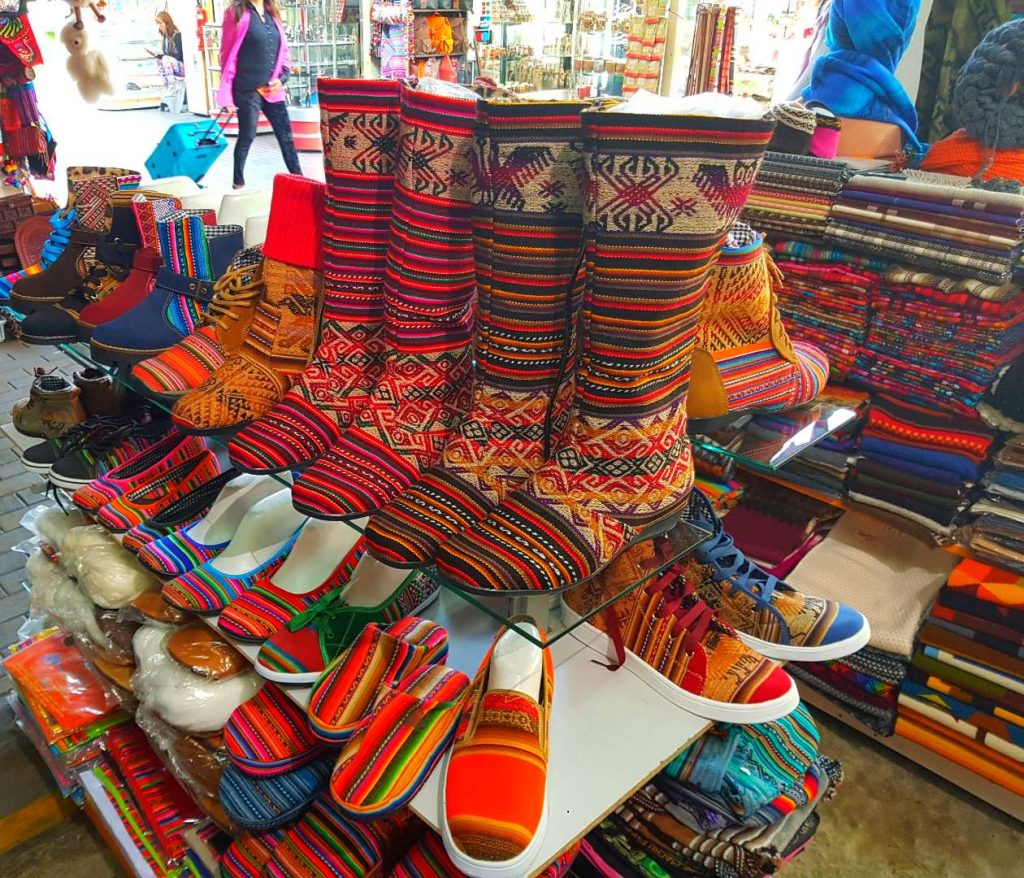 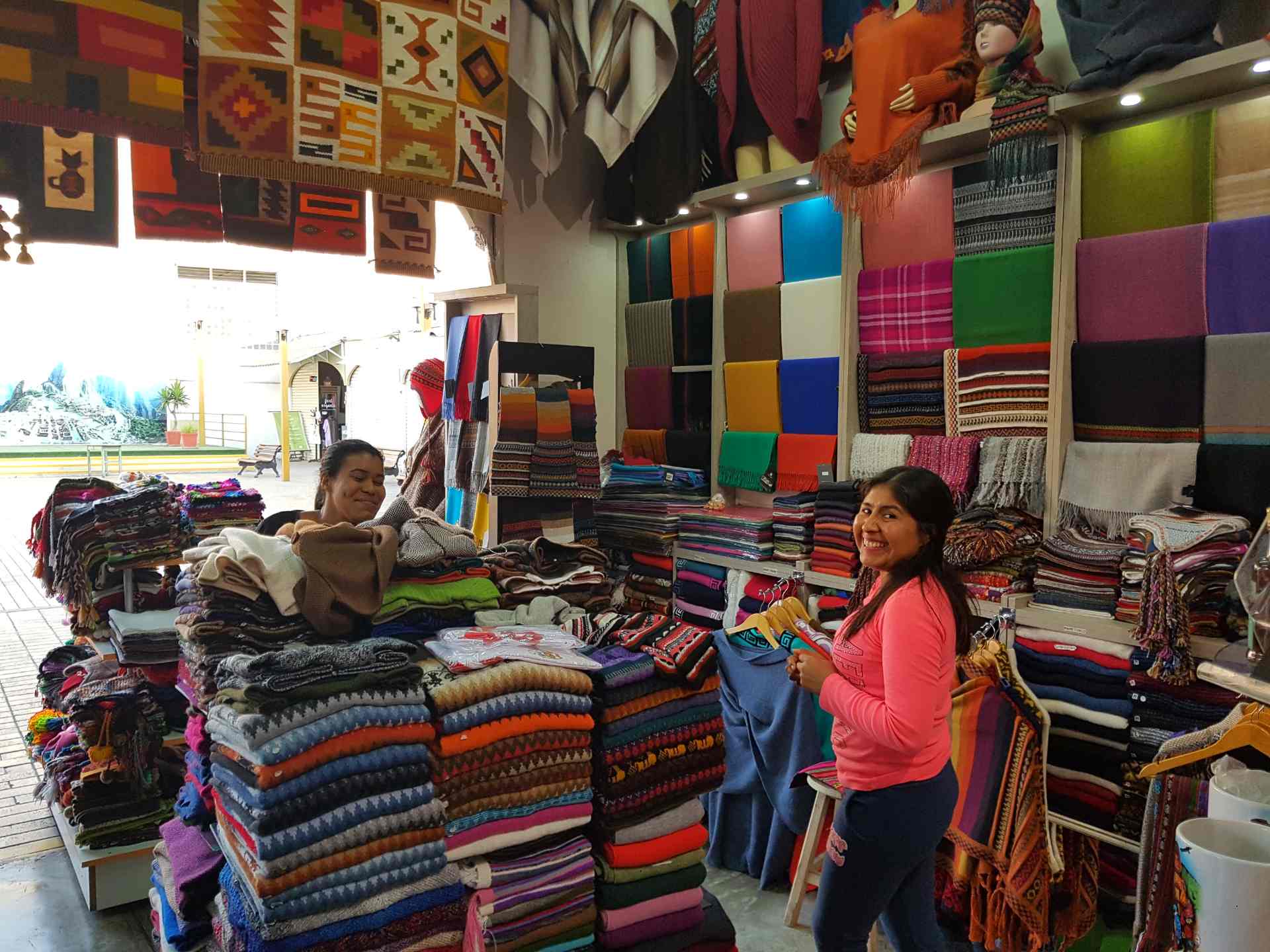 Textiles from rugs to shawls, ponchos, hats and sweaters on sale. 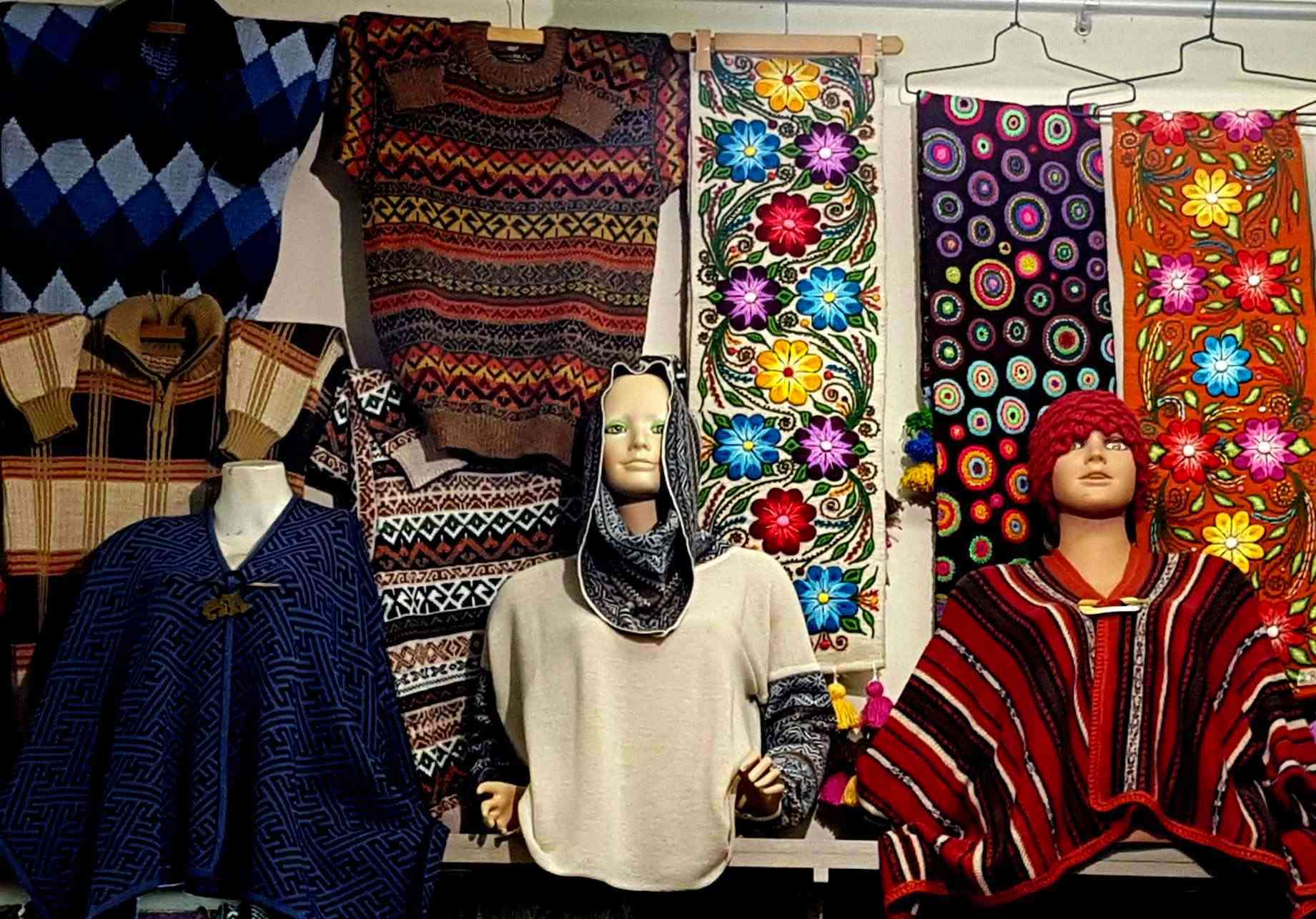 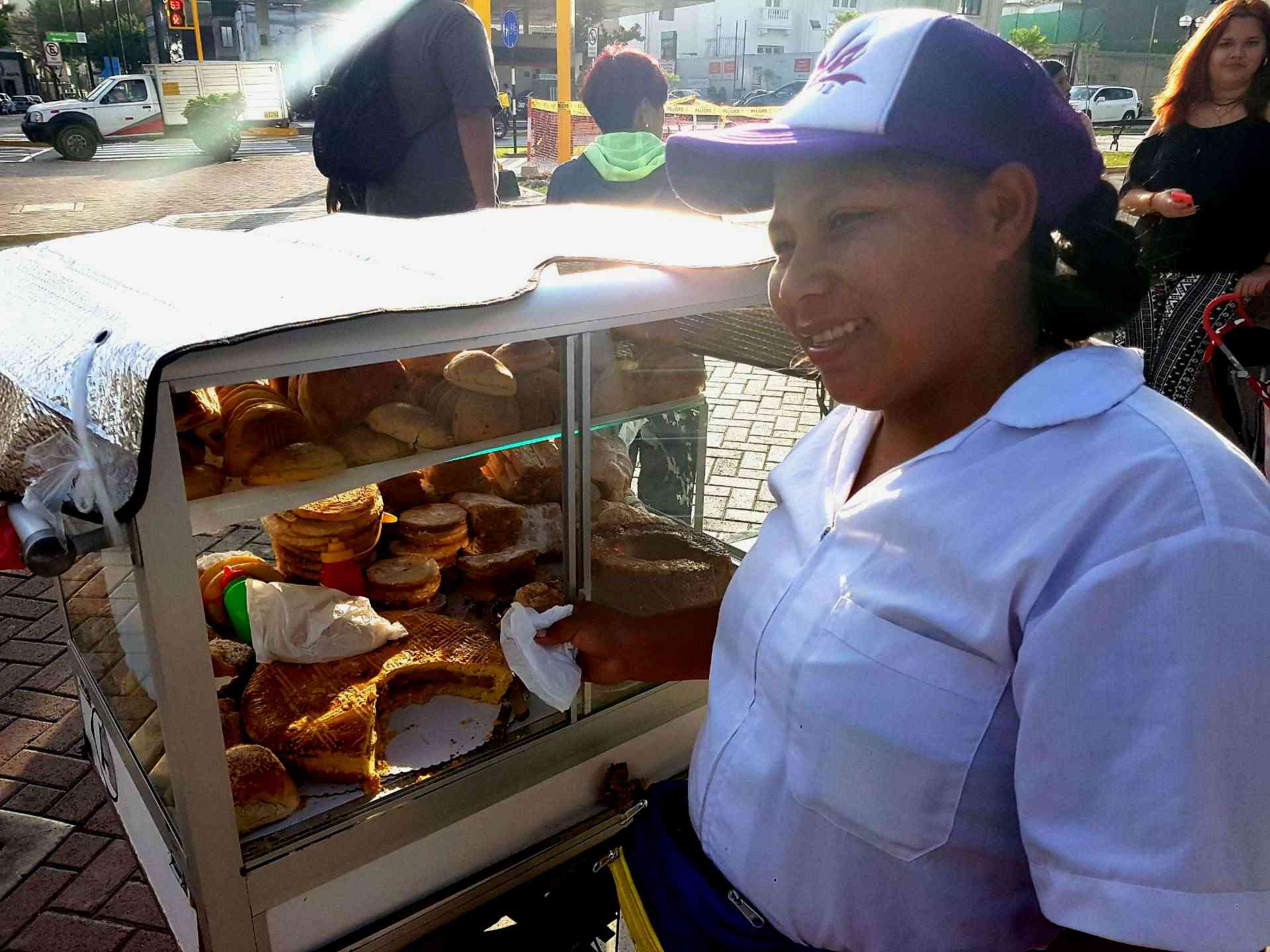 Pastry street vendors in the center of Lima! 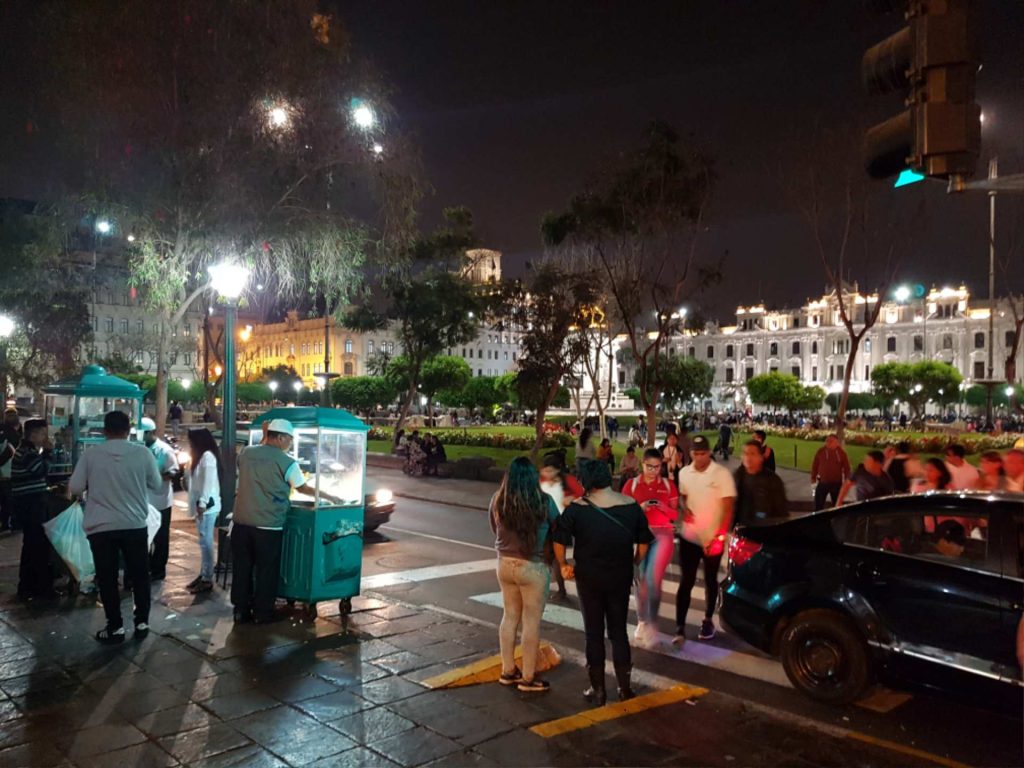 Buzzing night life in the historic district of Lima. 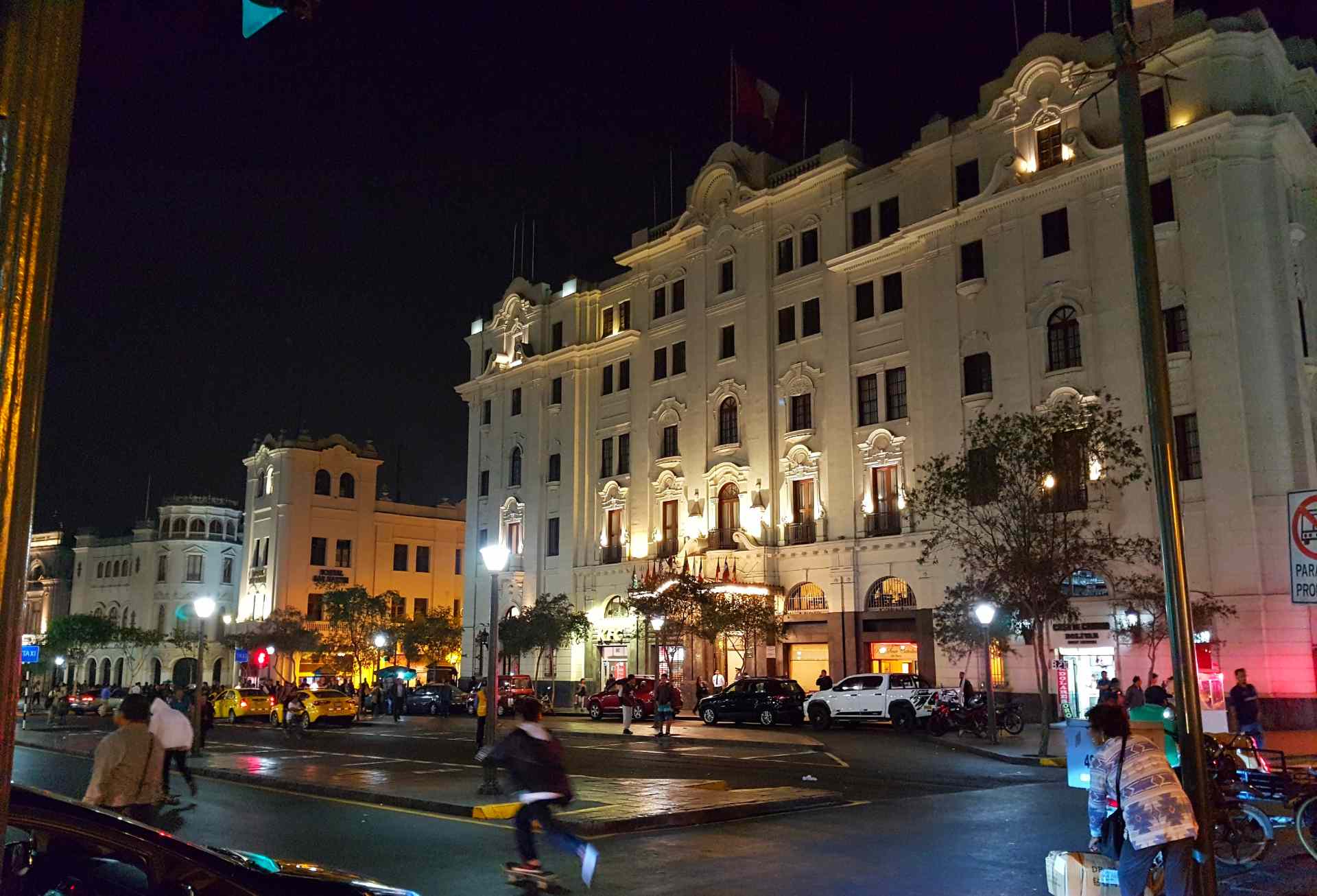 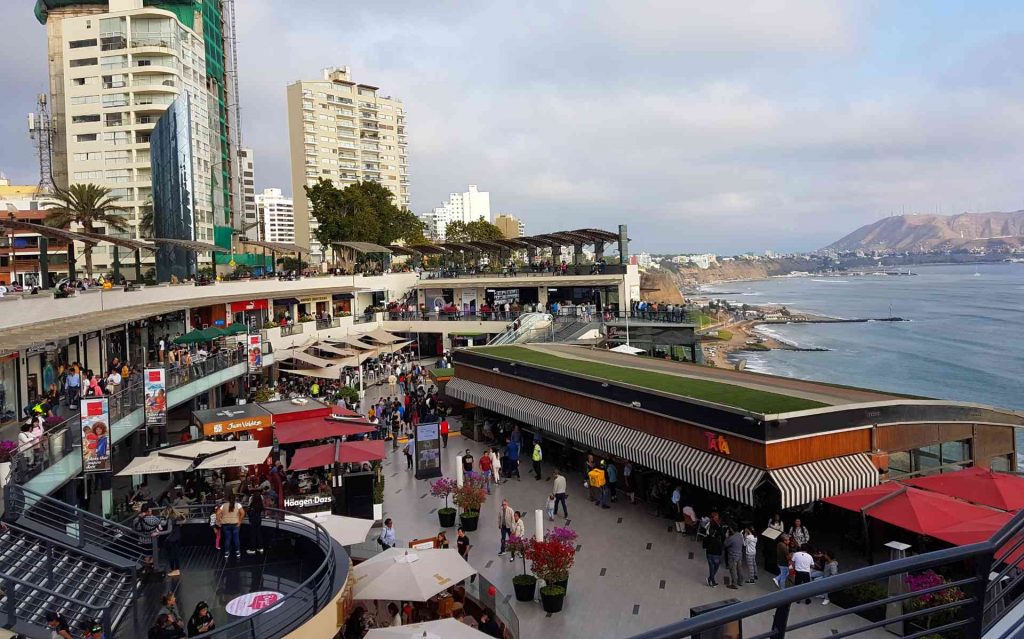 The conquest introduced Christianity to Latin America. It also spawned some of modern Lima’s iconic sites, such as the countless adorned churches and mosaic-lined chapels of the Basilica/Cathedral of Lima in the main square. 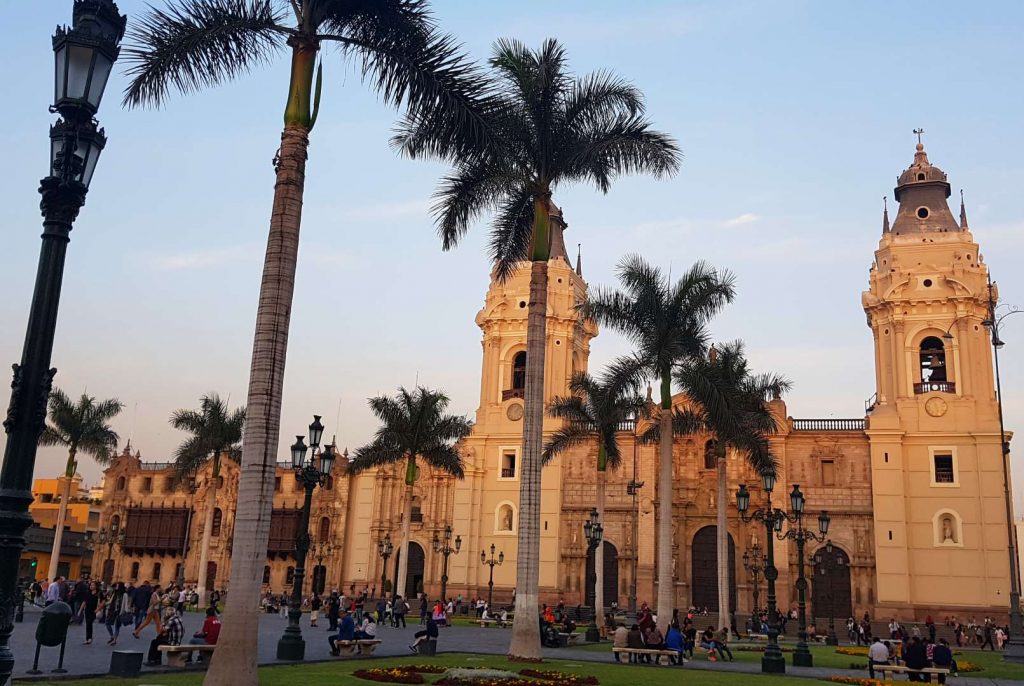 The Spanish colonial Basilica/Cathedral of Lima, where Pizarro laid the first stone in 1535.

The cathedral also holds the tomb of the person who brought it to life: Francisco Pizarro, who laid its first stone in 1535. Or so it was thought. Turns out the wrong mummified remains were on display for centuries (to the 1970s) until workers stumbled upon the conquistador’s actual bones in the church’s crypts, which were confirmed via forensic testing.

The Santo Domingo Church and its breathtaking convent hosts silver urns with the remains and glass-encased skulls of the city’s most famous saints, St. Rose of Lima and St. Martin de Porres (who became the first black saint of the Americas). The convent has stunning Spanish tiles and leisurely courtyards. 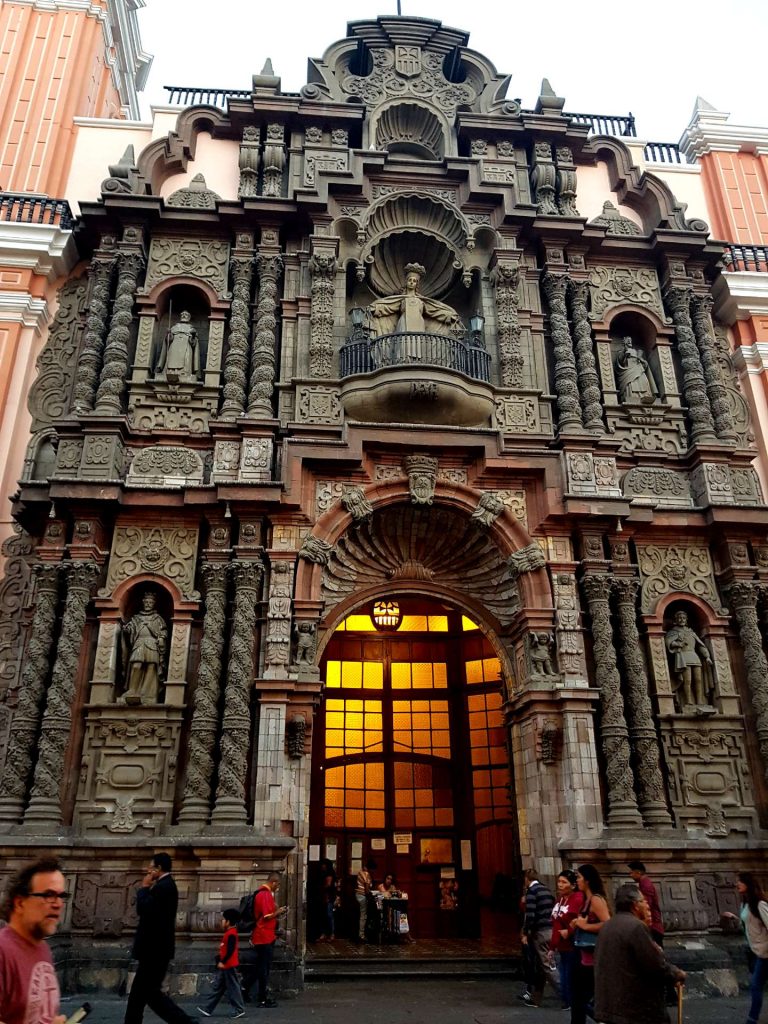 You won’t want to miss the Moorish-and-Spanish-designed and mural-adorned St. Francis of Assisi Basilica and Monastery; its world-renowned historical library hosts 25,000 ancient texts, some predating the 16th-century conquest, many extremely rare editions. It’s one of the oldest libraries in the Americas. Inside the monastery, one of the highlights is a painting of The Last Supper with Jesus and The Apostles dining on typical Peruvian fare, including potatoes and guinea pigs, two of the country’s culinary classics. 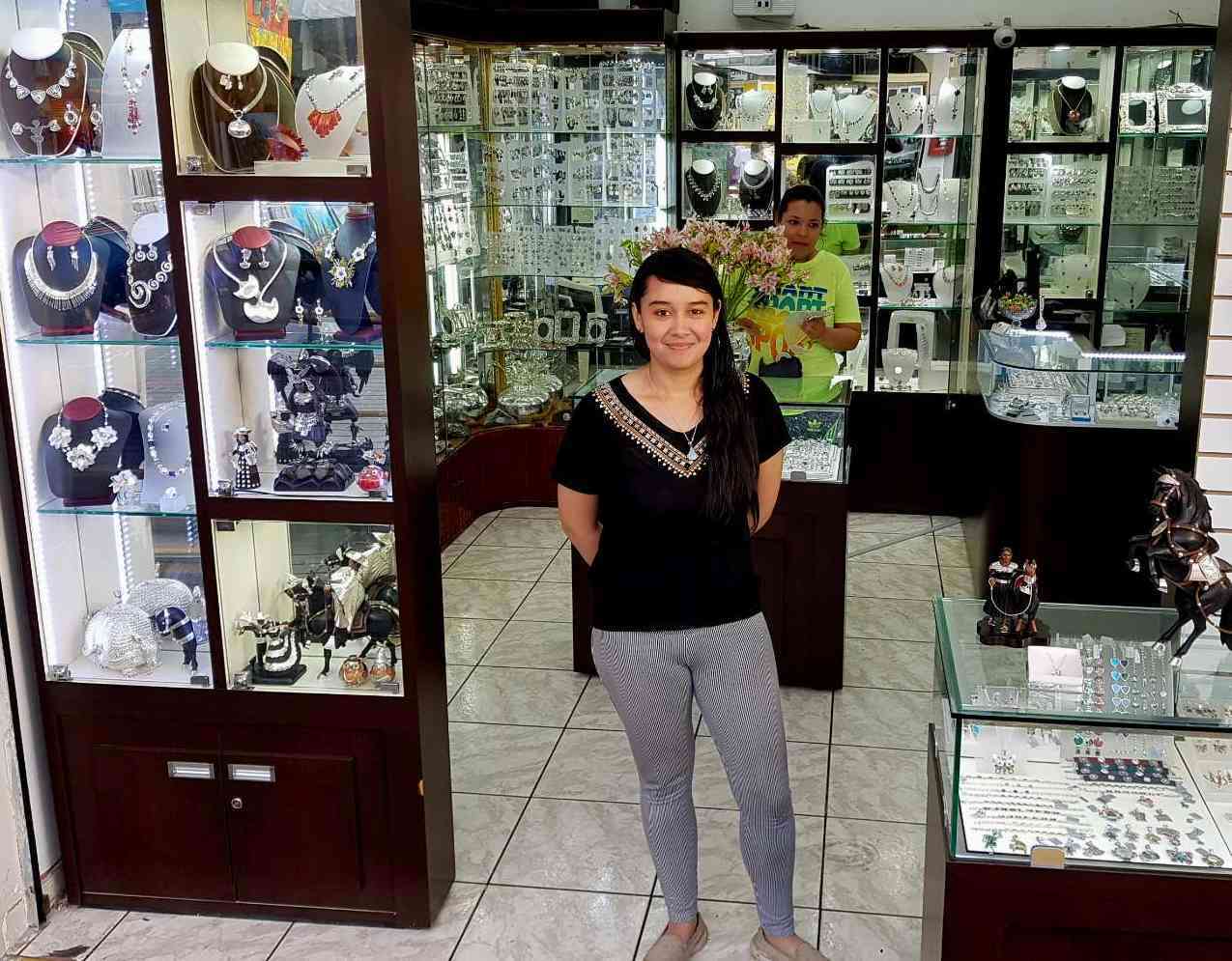 Silver on sale at the Inka Market in central Lima.

The church’s catacombs or burial crypts hold meticulously arranged skulls and bones of thousands of the dearly departed. Discovered in 1943, it was once the growing city’s final resting place before the first modern cemetery was built. It’s said there are secret passageways connecting to the Cathedral of Lima, and at the time, the Tribunal of the Spanish Inquisition. For centuries, the Inquisition tried and grotesquely tortured people (indigenous and non-indigenous) accused of deviating from Catholicism through witchcraft, sorcery and other outlawed practices. You can visit the Museum of Congress and the Inquisition in Lima to get some realistic (and quite disturbing!) insight. 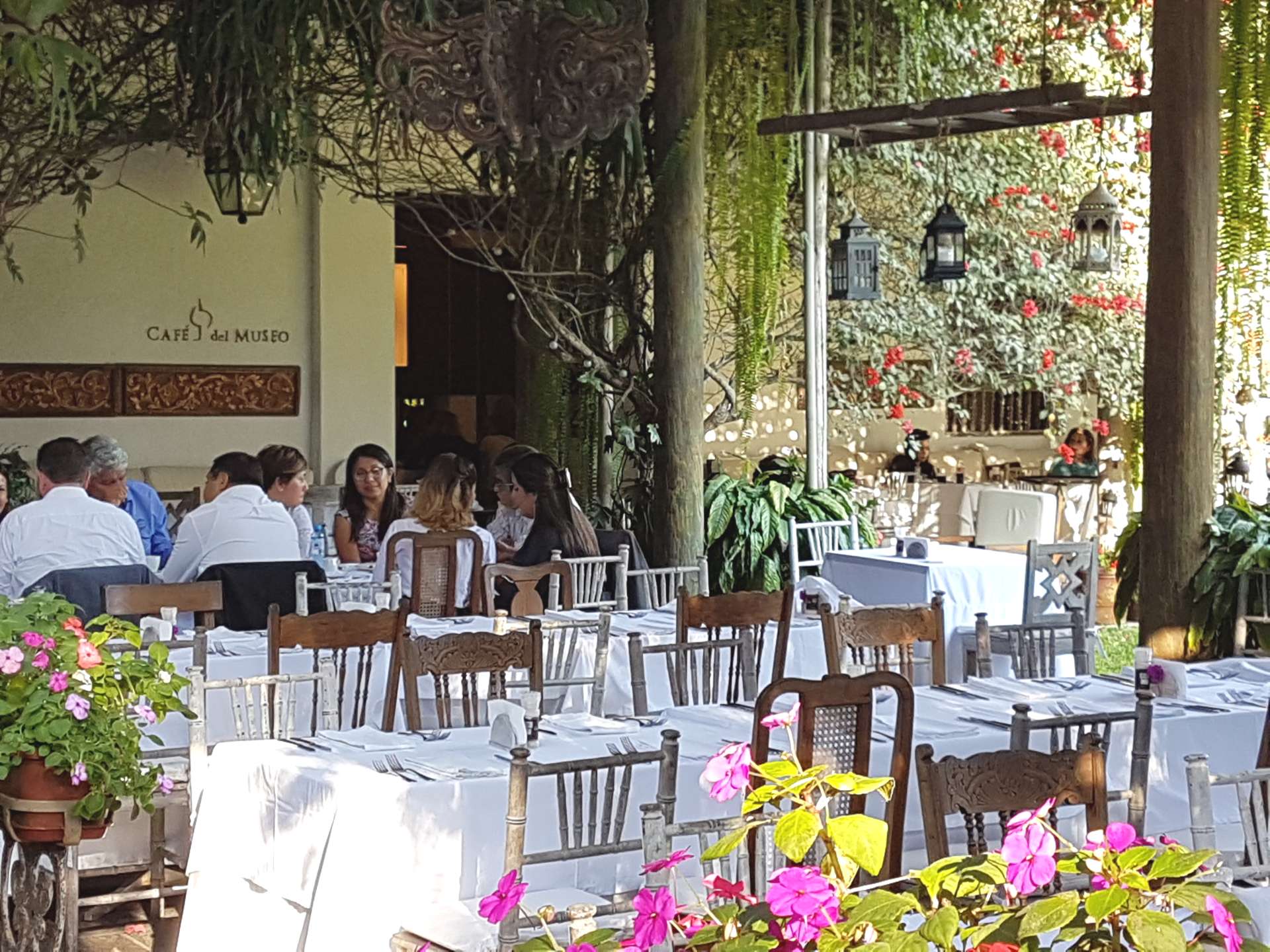 Drop by the Larco’s outdoor restaurant after visiting the museum.

Don’t skip the Museo Larco in Lima if you want a fantastic lesson in pre-Columbian history—it’s collection of very graphic ceramics and gold and silver handicrafts tell great stories. Or one of Lima’s most unusual sites, Huaca Pucllana, a pre-Columbian adobe temple that is an archaeological wonder. But Lima is overflowing with historically and culturally-rich museums: for example, the MALI (Art Museum of Lima) holds contemporary art exhibitions, as does the MATE (Mario Testino Museum), with portraits of Andean highlanders, alongside the photographer’s high fashion and British Royal Family prints. 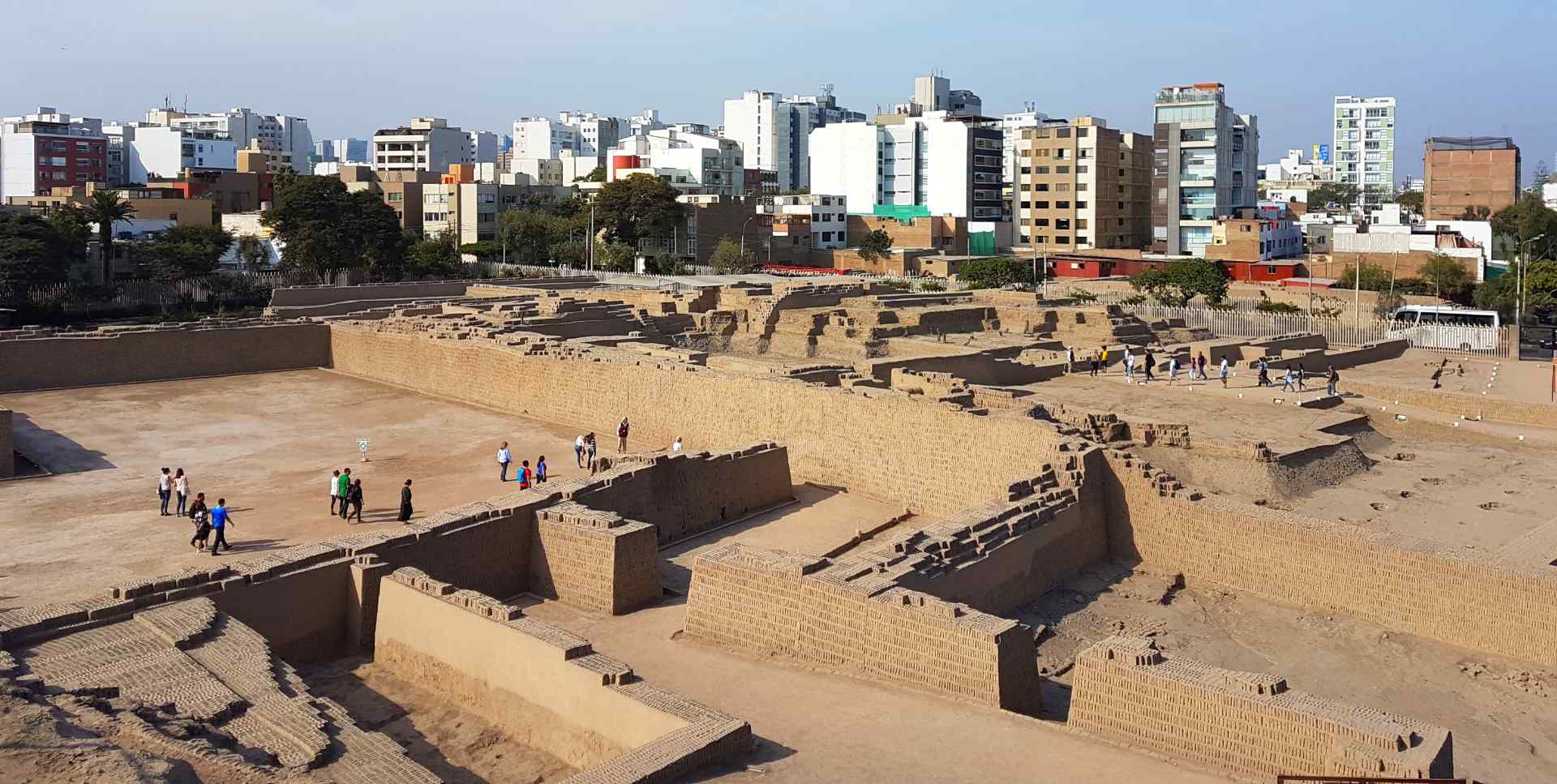 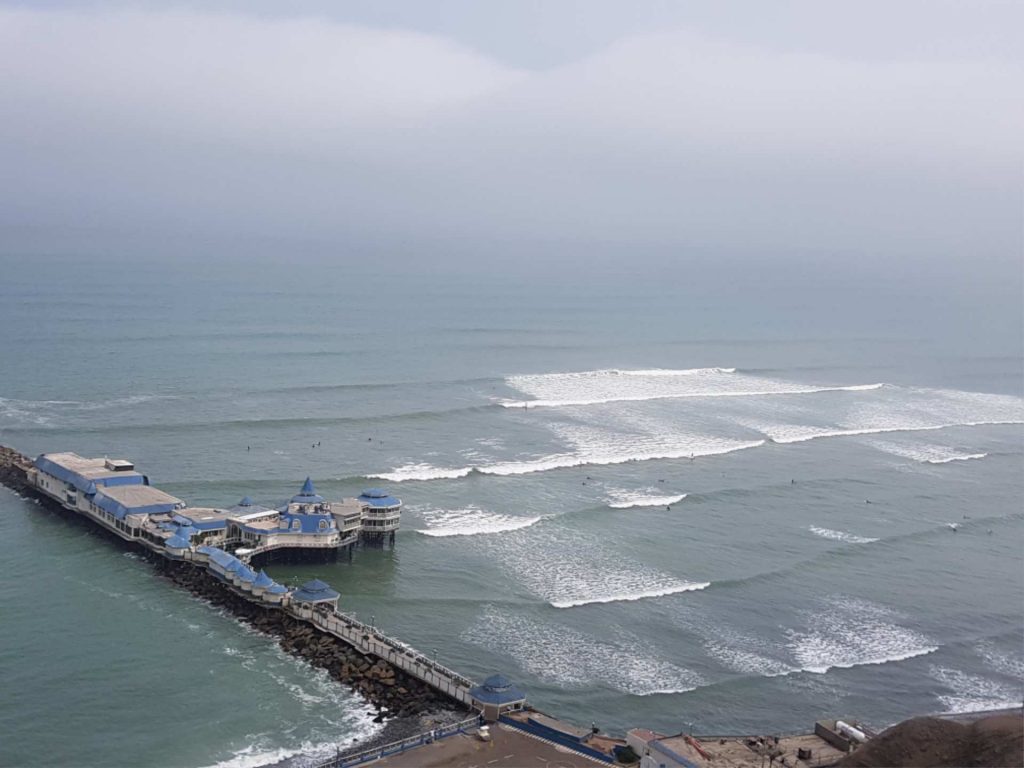 Lima is bordered by the Pacific Ocean, so surfing is both highly popular and accessible.

The bohemian neighbourhood of Barranco, where the museum is located, has eclectic galleries, crafts and local breweries, vibrant coffee shops and organic eateries. These days, the city itself breathes adventure, and there are plenty of thrills within its limits. In the districts and neighbourhoods of Miraflores and Barranco, Lima is home to world-class wind currents for paragliding and waves for surfing. 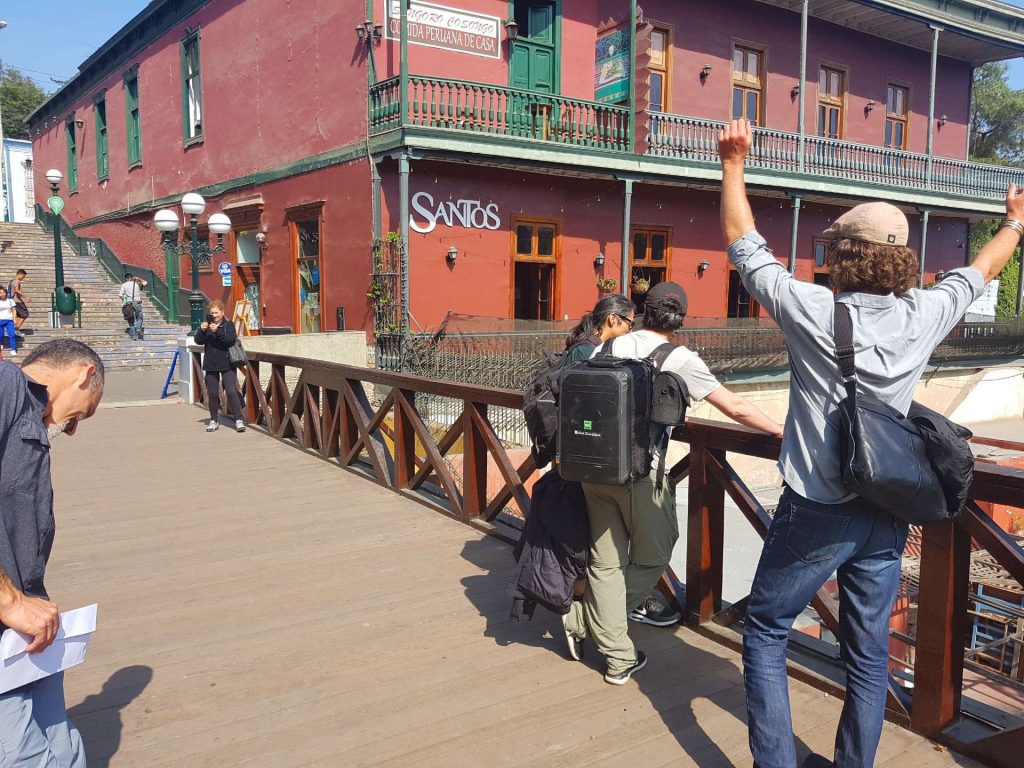 Be sure to cross the Bridge of Sighs in Barranco. 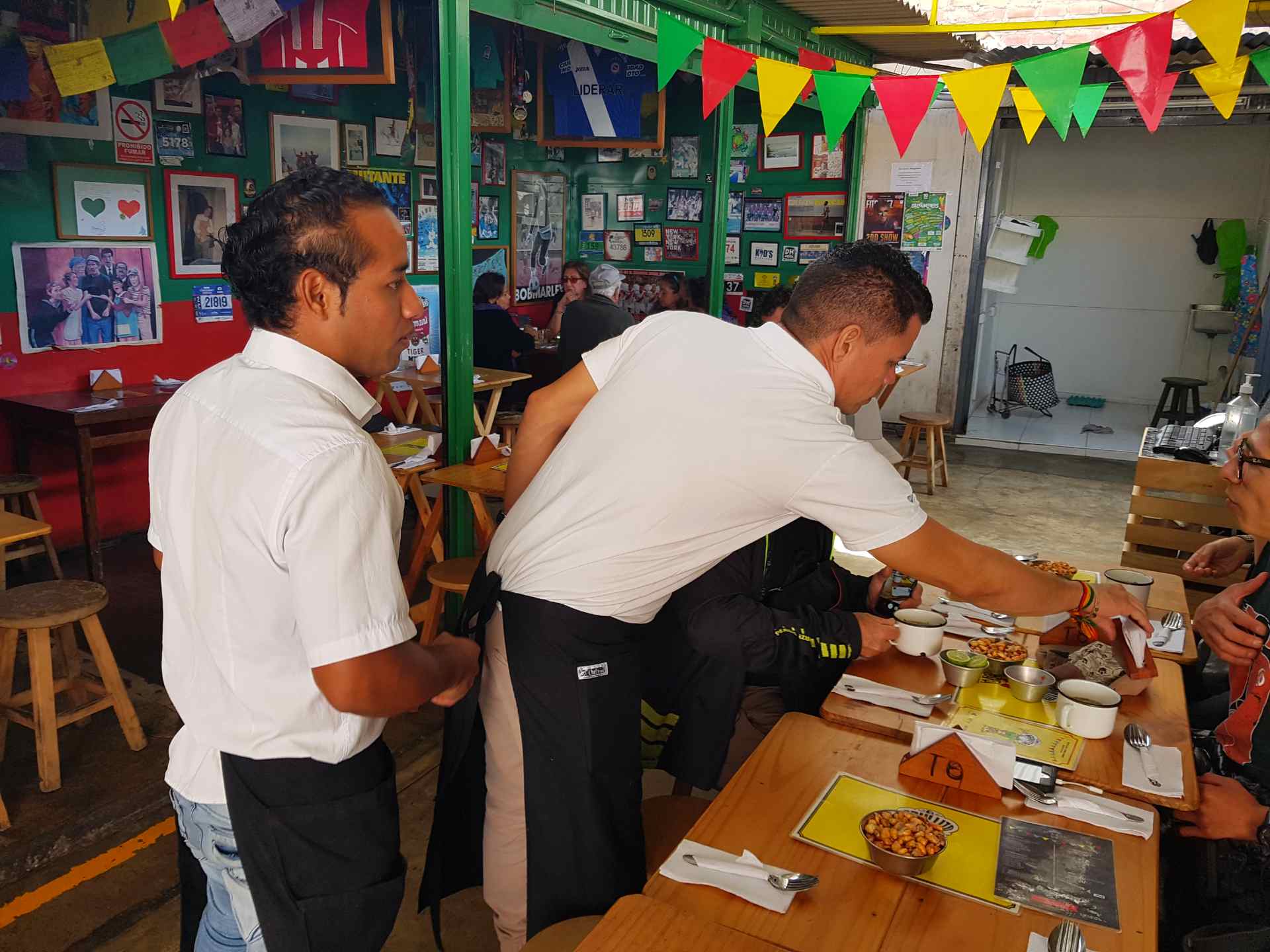 A bistro in the funky Barranco district of LIma. 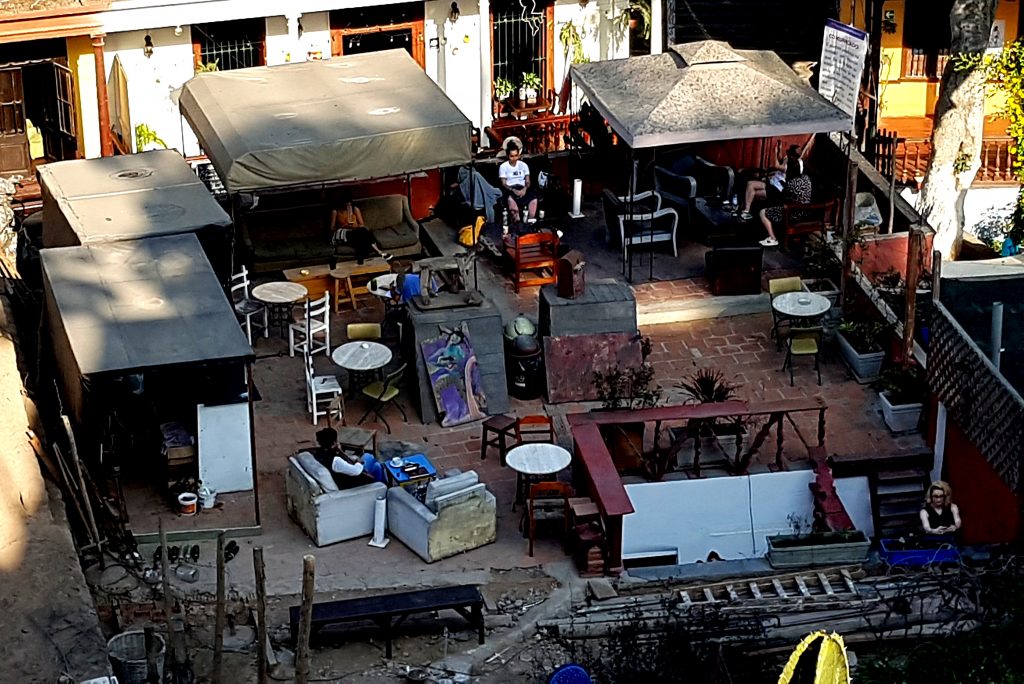 Just hanging in a hostel in hip Barranco.

Connecting Miraflores to Barranco—Lima’s hipster hood, with hostels, B&Bs, museums and cool restaurants to try—there’s a path that’s easily cycled or walked. You start at John F. Kennedy Park in Miraflores, the bustling district at the west end of Lima right on the Pacific shoreline (known as Cat Park, as it’s home to hundreds of feral cats that the city, by ordinance, protects!). You will pass through the neighbourhood San Isidro and end in the bohemian district of Barranco. 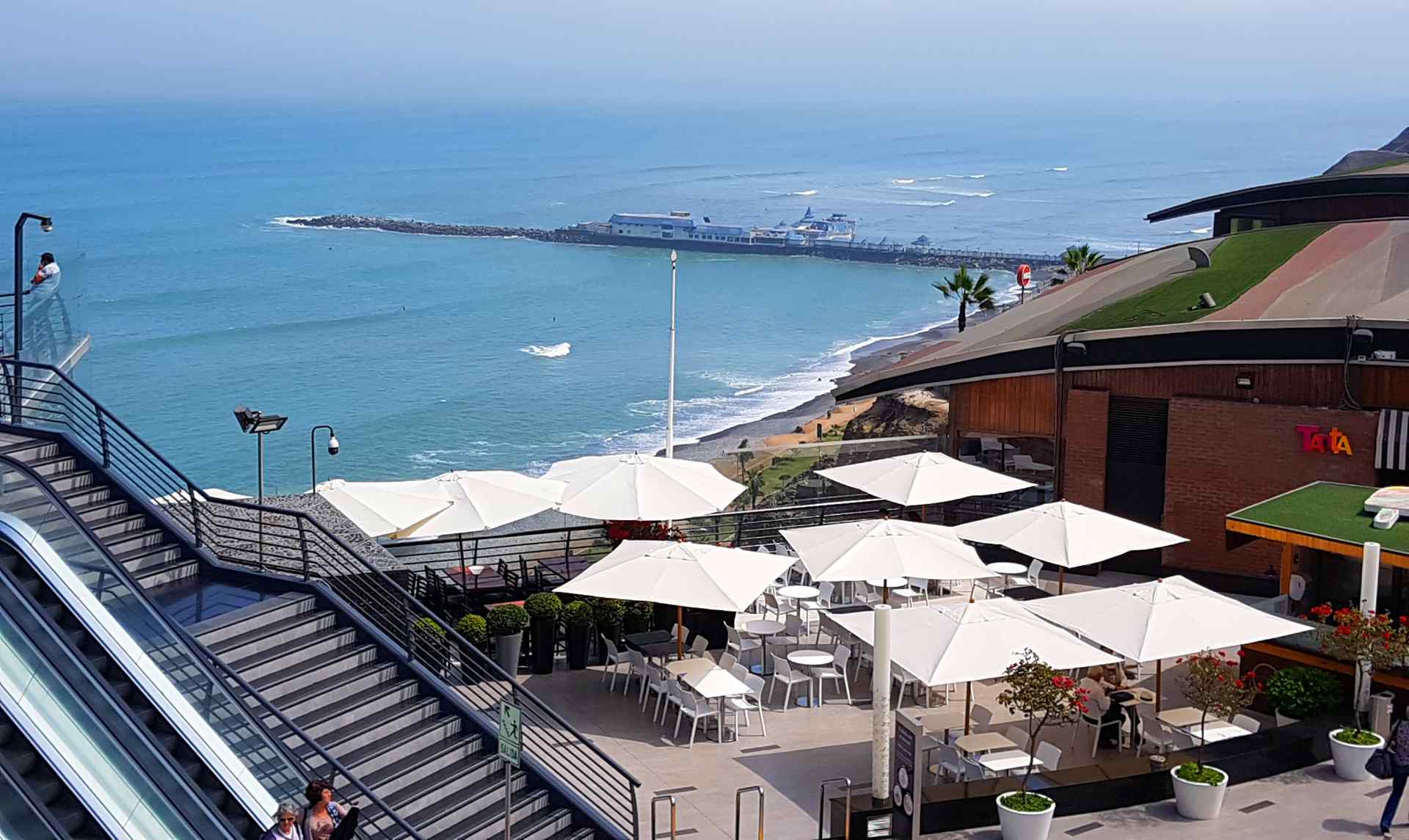 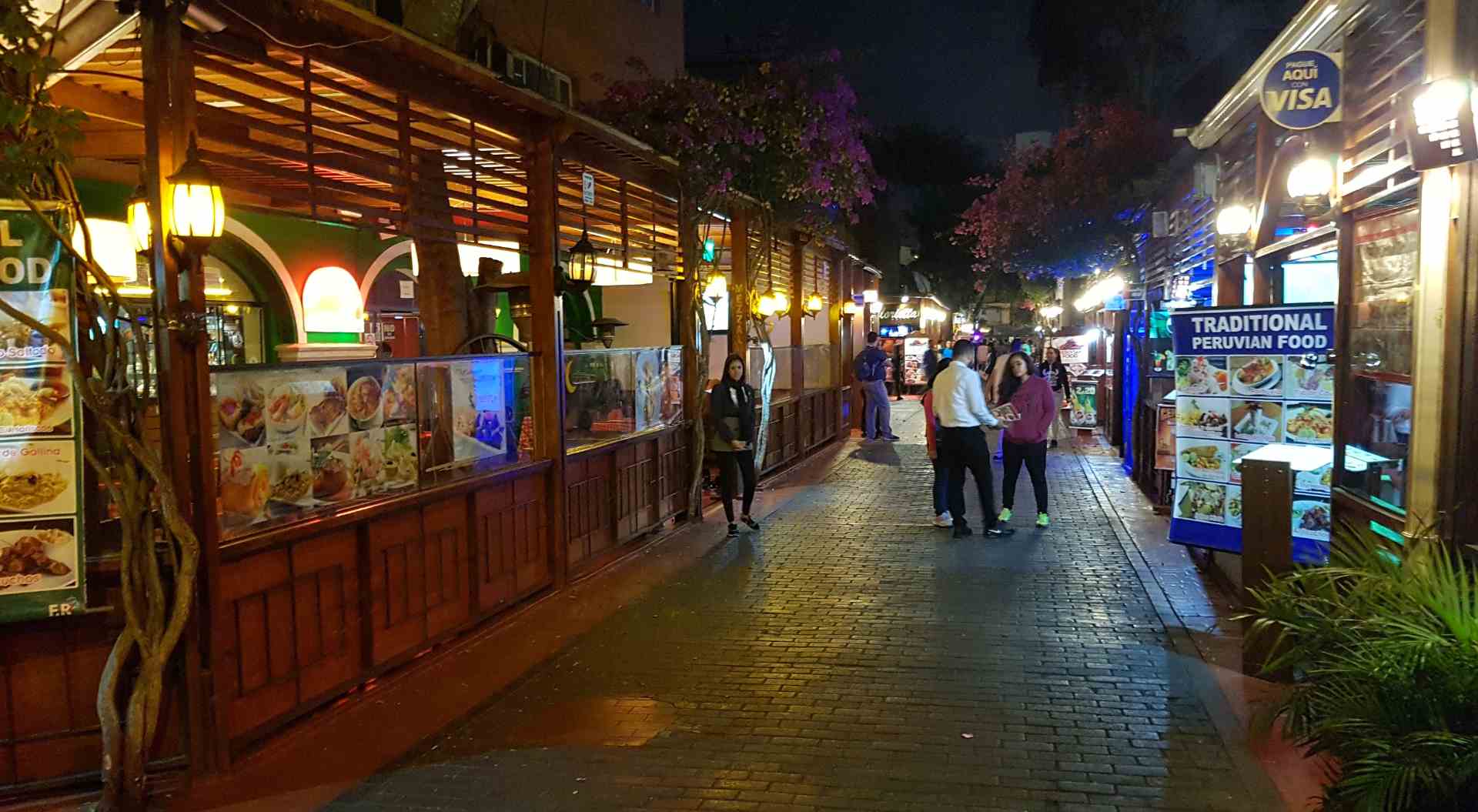 A food alley in the buzzing Miraflores district of Lima.

Almost entirely a stand-alone, the path offers a safe space from the city’s streets. You can also walk hand-in-hand as you pass through Love Park, which is littered with canoodling couples soaking in the coastal view. Those after serious views will be happy to hear Lima’s coastal desert paradise has naturally-formed rock walls to challenge beginner and expert climbers alike. 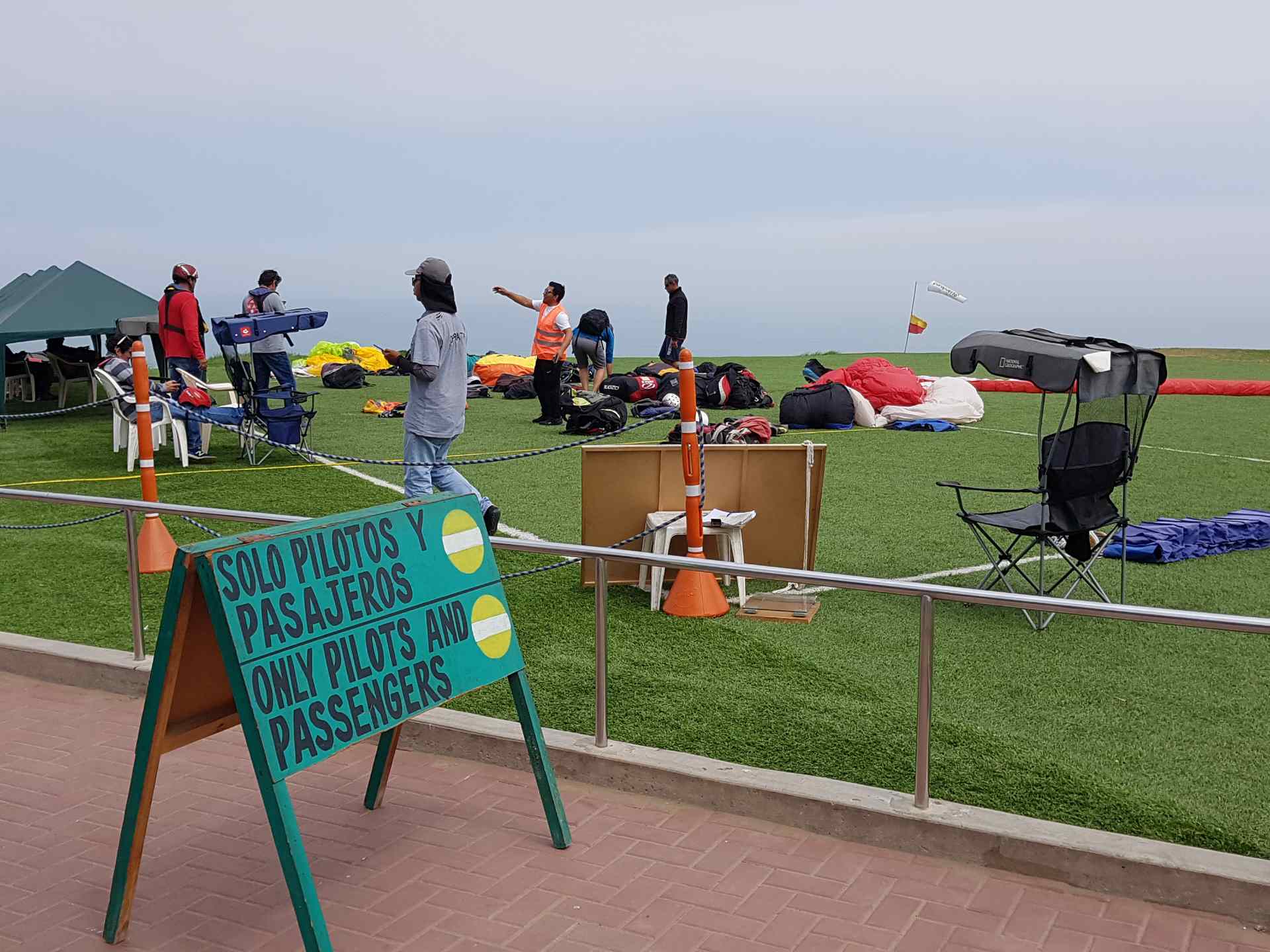 Paragliding is also popular cliff-side in the Miraflores district in Lima.

A couple of hours inland from Lima, you’ll find Lunahuaná, a small town which happens to be a great spot for adventure sports. It’s picking up steam as a playground for rafting, ziplining and mountain-bike enthusiasts. But so is Lima, which is no longer just a launching point for regional adventure. 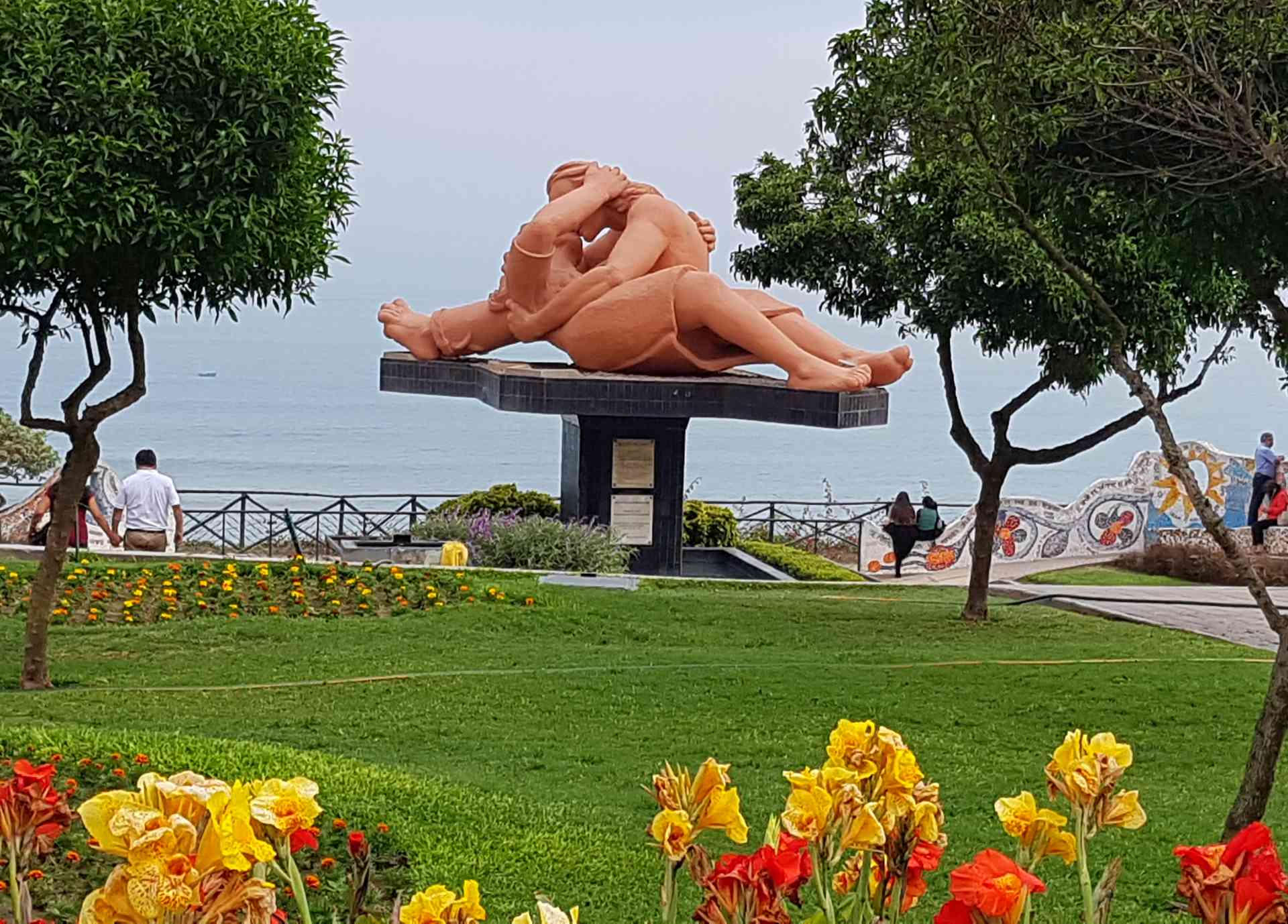 The infamous “Kiss” in Love Park has a long pathway that wraps around Lima’s shoreline.

Whatever you do in Lima, don’t leave without sampling Peruvian classics like ceviche (a raw seafood dish) and lomo saltado (a stir fry of sirloin, veggies and rice). You can’t go wrong. ♦