The first installment in Outpost’s two-part series on the world’s spookiest travel destinations.

Whether you’re seeking out the creepiest places in the world, an adventure to share at the next meeting of The Midnight Society or (for those of you who didn’t grow up with Are You Afraid of the Dark?) genuinely pursuing a connection with the “other side,” there are innumerable creepy places in the world in which to hone your phantom-divining skills.

Every culture has folklore regarding tragic or malevolent spirits and many regions offer supernatural experiences that’ll scare the brightly coloured Thai fisherman pants off of even the most seemingly stoic backpacker. If you indeed “ain’t afraid of no ghost” then be sure to check out some of these creepiest places in the world:

Guanajuato is a vibrant and creative city with cobblestone alleyways, living statues and colonial architecture in various cupcake colours. You would therefore never expect that beneath the floral bouquets and mottled shade of the tranquil cemetery dwells a colony of leather-skinned, twisted-limbed mummies whose expressions are almost as slack-jawed as those of the tourists that gape at them from beyond the glass.

In 1833, Guanajuato suffered a cholera outbreak so extreme that grave space was in short supply. The government thus imposed an annual taxation that, if not paid, would result in the deceased being exhumed and their plot being reallocated to individuals with more fiscally reliable relatives. But when city workers began digging up the bodies they discovered that approximately two per cent had naturally mummified due to extremely arid soil conditions. Although exhumation was banned in 1958, 119 mummies remain on display in El Museo de las Momias—including those of children, infants and even a fetus.

The mummies’ horrific facial expressions convince many tourists they died excruciating deaths (though I think they look less like they’re screaming in anguished torment and more like they’re reacting to sports bloopers) but in actuality the distortions occurred post-mortem as the bodies dried up. That said, there are a few mummies whose bodies imply dubious demises, and at least one person really was buried alive. 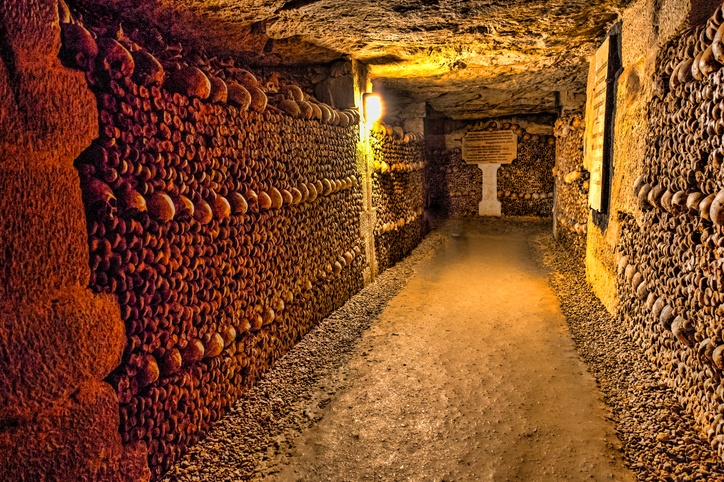 The Realm of the Dead, the Catacombs of Paris are underground ossuaries in Paris. (Dirk94025-iStock).

With fog that snags on turrets like an ethereal kite and shadows that play in nooks like mischievous children, it isn’t hard to understand why one of Europe’s most architecturally spectacular cities is often considered to be its most haunted. Even those who generally scoff at the notion of the paranormal may experience something they cannot explain and must mentally file under Stuff Not to Think About on Dark and Stormy Nights. People like me, for instance.

Edinburgh’s South Bridge was built in the 1780s and includes a series of chambers within its arches. While commerce flourished on the surface, the vaults below were reserved for workshops and living quarters. The most impoverished individuals resided on the lowest levels as fractures in the bridge’s viaducts allowed rainwater and waste (and thus disease) to flow into these poorly ventilated cavities.

When the Potato Famine hit Ireland in the 1840s, migrants sought refuge in the belly of the South Bridge and lived up to 10 people in one room. The vaults soon became the red light district, known for black market activities and prostitution as well as crime, rape and murder. The government ordered them closed off in the late nineteenth century and they remained forgotten until their rediscovery in the 1980s.

Nowadays, various tour companies offer vault walking excursions and participants frequently sense the presence of unseen persons or even the touch of a child’s hand. My own experience was apparently common but nevertheless chilling: at one point during the tour, I became suddenly and overwhelmingly nauseous, lightheaded and clammy. As I swayed on trembling legs and wondered where the nearest emergency exit was, I heard the guide say, “If you start to feel sick for no reason, then you’ve walked into what we call a ‘cold spot.’ Take a step to the side and you’ll immediately feel better.”

With one eyebrow skeptically cocked, I followed her instructions; the transformation was instantaneous. But though my corporeal self was reinvigorated and zesty, my psychological self was shaken and bruised. Because if there’s no such thing as ghosts, then what the heck was that?

Nestled in a shrieking jungle and accessible only via an icy plunge in a deep pool, the A.T.M. Cave is creepy even before you reach the bones. Stalactites and stalagmites mimic teeth and claws while oozing rock formations resemble waxy reptilian skin. Tight squeezes, hushing silences and absolute darkness fluctuate between humbling and terrifying for the travelers apprehensively sloshing through the subterranean river.

The A.T.M. Cave was a sacred place to the ancient Maya with both objects and people being sacrificed within its chambers. Pottery faces upwards, downwards or sideways depending whether the offering was intended for the celestial, the telluric or the netherworld. Most have kill holes, which were believed to release the pot’s spirit.

Human skulls strewn throughout the cavern also bear kill holes and some show evidence of having been manipulated to look like revered animals. “Jaguar” babies had their teeth sharpened and skulls flattened between two boards; a dangling bead between their eyes encouraged a crossed gaze. Arguably the most staggering remains in the A.T.M. Cave is that of the Crystal Maiden (which was in fact recently identified as an adolescent male). The splayed skeleton, whose snapped spine infers an excruciating cause of death, has been calcified to the ground by mineral-enriched water dripping from above and glitters disconcertingly beneath the glow of the headlamps.

Breaking Down the History of Budapest | Hungary’s Stunning Capital

How to Buy Groceries in the Mediterranean