The Disappearance of Yukon’s Slims River Should Worry You

National parks are national treasures. But because of our warming climate, many are changing irreparably—especially in Canada.

I love national parks. Whether it was hiking and skiing across the Rocky Mountains in Banff and Jasper, exploring tide pools in Pacific Rim on Vancouver Island’s western shores, watching the tides rise on the Bay of Fundy, or losing my young self in the storied shipwrecks that lay beneath the crystal waters off Ontario’s Bruce Peninsula, some of my fondest childhood memories were made in Canada’s national parks.

As an adult, that love has gone global. I’ve hiked with baboons in South Africa, paddled the Amazon in Brazil, wandered through jungle-draped ruins in Peru and Mexico, slept under endless Arctic daylight in Norway and Alaska and skied off volcanoes—all within the boundaries of national parks or protected areas.

Of course, parks vary around the globe—and are not without their flaws and challenges—but they’re still among the modern world’s best ideas. And that’s one of the reasons climate change terrifies me so much, because it has the potential to ravage these places, and make moot the painstaking efforts to preserve them.

Earlier this summer, on my way home from two months in Alaska, I was driving along the shores of Kluane Lake in the Yukon. To my left, the massive, icy lake; to my right, the towering front range of the Saint Elias Mountains, the edge of Kluane National Park and Preserve.

Easily one of Canada’s most stunning parks, Kluane is home to Mount Logan (Canada’s highest peak), incredibly scenic hiking and mountaineering, breathtaking wildlife and, as of 2017, river piracy. 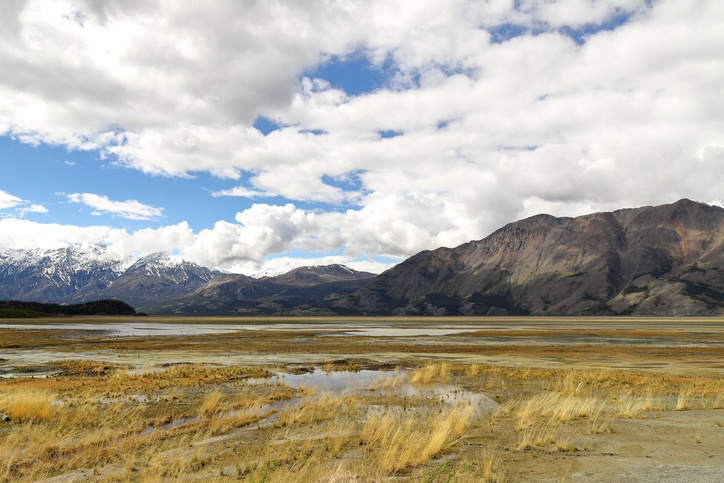 This photo and above: The beauty of Slims River Valley, Yukon, Canada. (Credit: iStock-Reinhard)

River piracy, in this case, isn’t a roving canoe-bound band of scallywags, but geological shorthand for when one river stops flowing in its usual drainage and diverts most, or all, of its flow into another. In this instance, the victim was the Slims River, a once flush torrent that flowed from the Kaskawulsh Glacier into Kluane Lake.

Driving over the Slims this summer, clouds billowed out of the now-desert-dry valley, enveloping my van in a smoky cloud of fine, brown dust. Crossing the river, the bridge felt like a strange monument to what once was—a long stretch of steel and concrete over a mere trickling brook.

As global temperatures have steadily risen, the Kaskawulsh Glacier has been retreating. Then, last spring, the glacier that had previously fed both the Kaskawulsh and Slims Rivers crossed some kind of Rubicon, retreating so far that meltwater no longer made its way into the Slims. While the whole process took years, it took only four days for the Slims to weaken to a trickle.

That’s only one example. The Athabasca Glacier in Jasper National Park, the world’s most-visited glacier, is losing more than five metres of ice each year. In Ontario’s Point Pelee National Park, iconic and important wetland bird habitat is drying out while the water levels of the Great Lakes are dropping precipitously in places. Coastal erosion and sea level rise threaten national parks on both the Pacific and Atlantic coasts, while wildfires are threatening parks across the country—this is why officials forced an evacuation of Waterton Lakes National Park, near the Alberta–Montana border, just a few weeks ago.

South of the border, scientists in the United States have linked massive rockfalls on the iconic rock faces of the Yosemite Valley to climate change. More have warned that rising temperatures and extreme weather could wipe out the Everglades in Florida and, according to a May 2017 report, Glacier National Park in Montana could be glacier-less in a matter of decades. Even the Statue of Liberty, a national monument operated by the United States Park Service, is in danger, considered a to be at “high exposure” to climate impacts by the United Nations.

Outside North America, things aren’t much better. In South Africa’s Kruger National Park, rising temperatures could wipe out two-thirds of the park’s species; areas protecting the world’s largest mangrove forest in South Asia are already being lost to rising seas; Mount Kilimanjaro’s glaciers could disappear by 2020; and Australia’s persistent droughts are loading the dice for severe wildfires, threatening a repeat of that day in January 2003 when more than 140 fires ignited across national parks across the country.

I could keep going, but you probably get the idea.

Back in the Yukon, in the summer of 2012, I hiked up along a still-flowing Slims River to traverse a ridge of Thachäl Dhäl (a.k.a. Sheep Mountain), an unmarked, off-trail hiking route in the Kluane. It remains one of the greatest hikes I have ever been on, climbing up from the valley to an open alpine ridge dotted with Dall sheep. I remember sitting down to eat an energy bar and take it all in and seeing golden eagles circling the skies above me, eyes scanning the slopes below for a chance to dive and snag a newborn sheep for their next meal.

It was among the wildest places I had ever been, an ecosystem preserved not just by political regulations, but by the Slims River itself. The area’s Dall sheep couldn’t cross the mighty Slims, which kept them within the park’s boundaries, where they flourished—particularly because of their distance from hunters.

Now, park officials and conservationists are worried. With the Slims River disappearing, the Dall sheep can leave the park, wandering into the gun sights of hunters looking for a trophy. A boundary that used to all but ensure the continuation of unique ecosystem has fallen—not because of a clear cut, road or mine, but because climate change slowly winnowed away at a glacier until it shut down an entire river.

According to the International Union for Conservation of Nature, a non-profit, there are more than 6,500 protected areas around the globe considered to be national parks. On top of this, there are tens of thousands more state and provincial parks, national monuments, wilderness reserves and other types of protected areas, all developed with some sense of protection and preservation—and I’m willing to bet that more of them are threatened by climate change than not.

Like I said, I love national parks. They’re some of the greatest places to visit in any part of the world. This past year, thanks to Canada 150, more people than ever before visited our national parks; last year, on the 100th anniversary of the United States’ National Park Service, the US broke their own visitation records. These are, without a doubt, some of our planet’s most valuable treasures. But with their wilderness and wildlife, they’re also some of the most vulnerable.

Between Monarch and Ryanair, a Million Holidays Just Got Ruined