Dubrovnik, Glittering Pearl of the Adriatic

Dubrovnik, Croatia, is a stunning, ancient capital that has one of the best preserved medieval citadels in the world. Here’s Outpost contributor Dario De Santis in another installment of his tour of Central Europe.

The black Mercedes darts along the coastal national road. On our right are cliffs and mountains, on our left, the blue expanse of the Adriatic Sea. On board with me are my girlfriend Angeliki and my old friend Lorenzo. After the umpteenth turn we catch sight of Dubrovnik, the pearl of the Adriatic, with its unmistakable contour marked by massive, bright grey walls.

The taxi driver was right, it took us less than one hour to get here from Herceg Novi, Montenegro. The crossing of the border was quick and painless, a glimpse at our documents and off we went. After all, a bit more than twenty years ago it was Yugoslavia on both sides of the barrier. 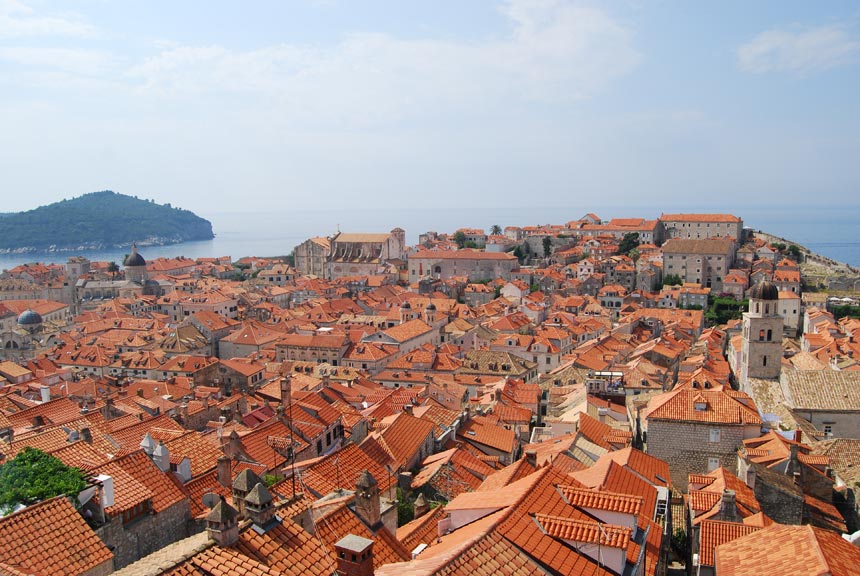 Our first glimpse of the old city—one of the best preserved medieval citadels in the world—is shocking. The temperature is well over 40 degrees Celsius, not to mention the humidity, but what really strikes us is the flood of tourists pouring into the walled city.

Hundreds of people swarm the restaurants and bars, gather around the stands advertising a variety of tours and activities: kayaking tour, walking tour, night tour, Game of Thrones tour (Dubrovnik served as setting for many scenes of this popular series)… meanwhile tour buses keep arriving and unloading more and more people.

To enter the old city we walk across a stone bridge and through the imposing Pile Gate, surmounted by a blessing statue of St. Blaise, Dubrovnik’s patron saint. As we cross the gate, we are catapulted into another dimension, centuries back in time. 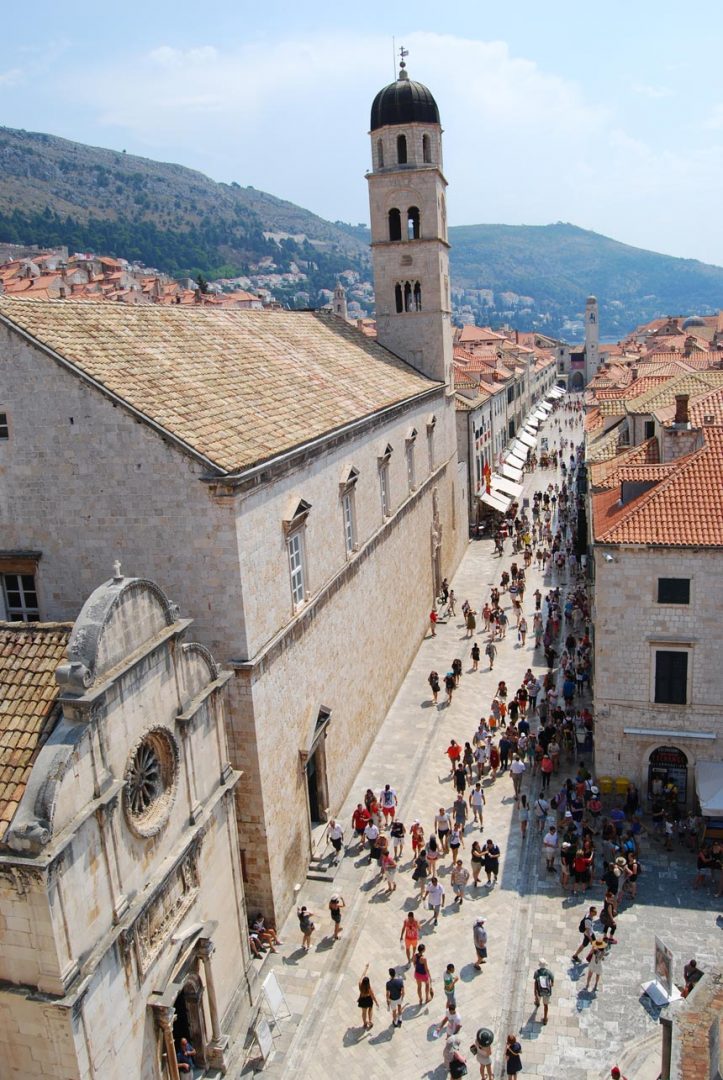 I wonder how all this has survived through the centuries of siege and wars. The city was bombed only 24 years ago and few of the material traces of that dark page of history remain—or perhaps they have been well concealed.

The open space after the Pile Gate is occupied by the old Onofrio’s fountain, at whose taps, shaped as theatrical masks, scores of people drink and refill their bottles.

On our left there is a beautiful church and next to it a large Franciscan monastery, which hosts a splendid Romanesque cloister and one of the oldest still functioning pharmacies in the world. 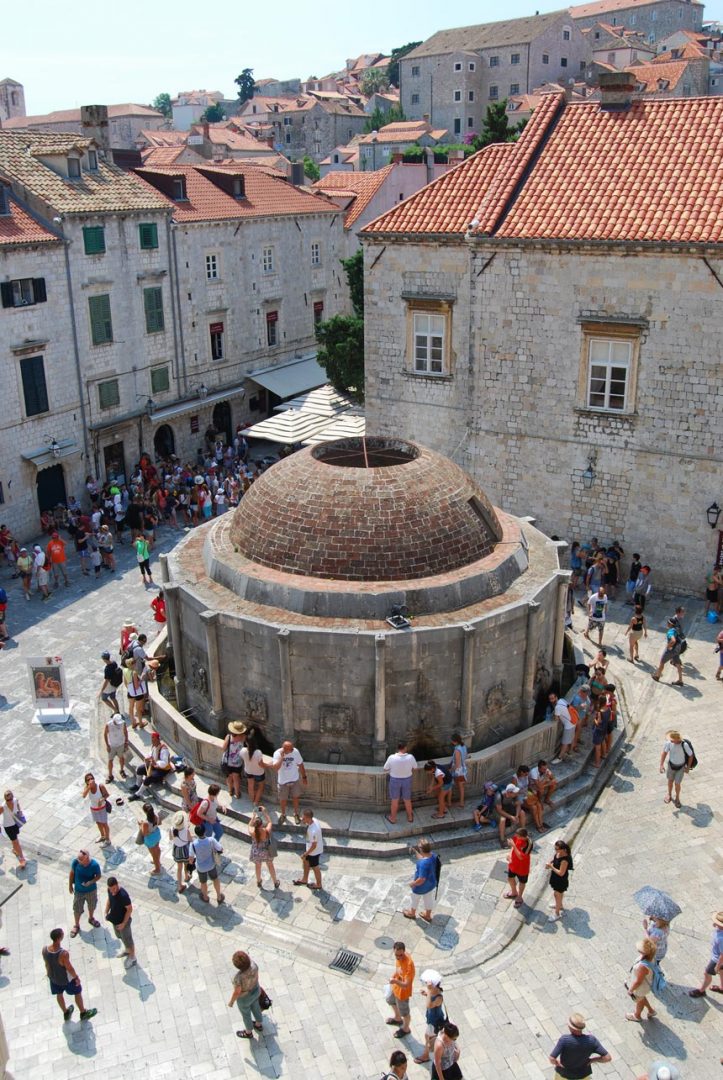 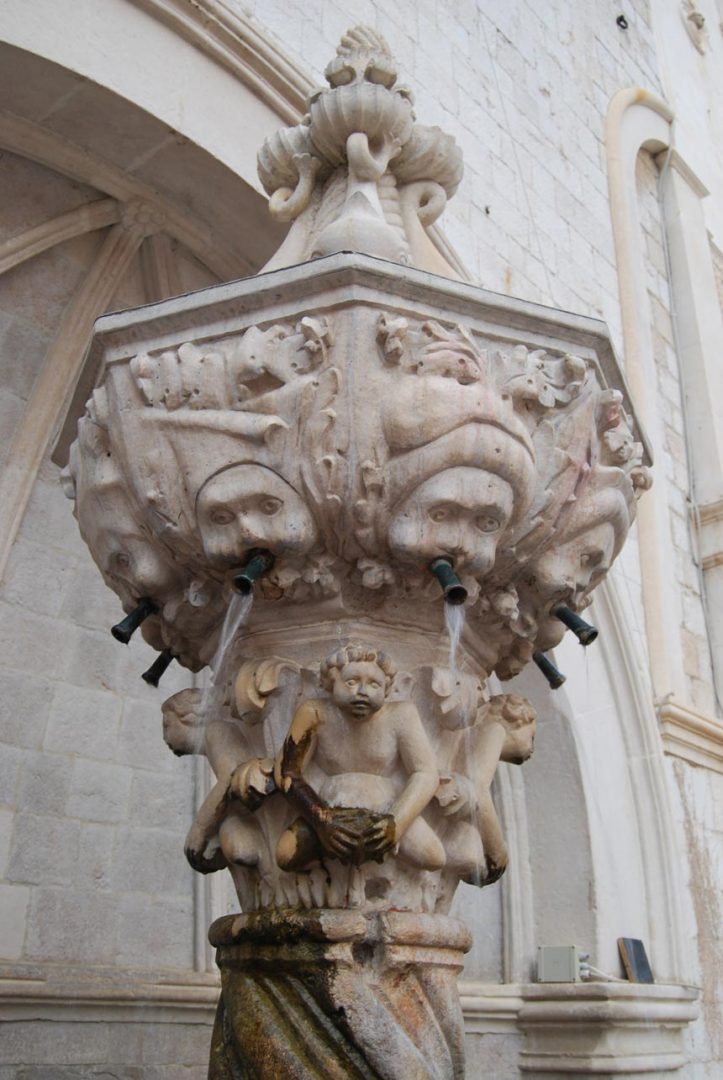 The two extremities of the old city are connected by a long street called Stradun, a Venetian word meaning big road. The limestone slabs of Stradun are as smooth and shiny as ice due to the continuous foot traffic. Every day thousands of people walk this street, lined with historical buildings that long ago used to host institutions or aristocratic families that today have been converted into shops, cafes and restaurants.

We are shocked when we notice the high prices of menu items, especially when compared to those in Montenegro and Kosovo, where we were a few days before. 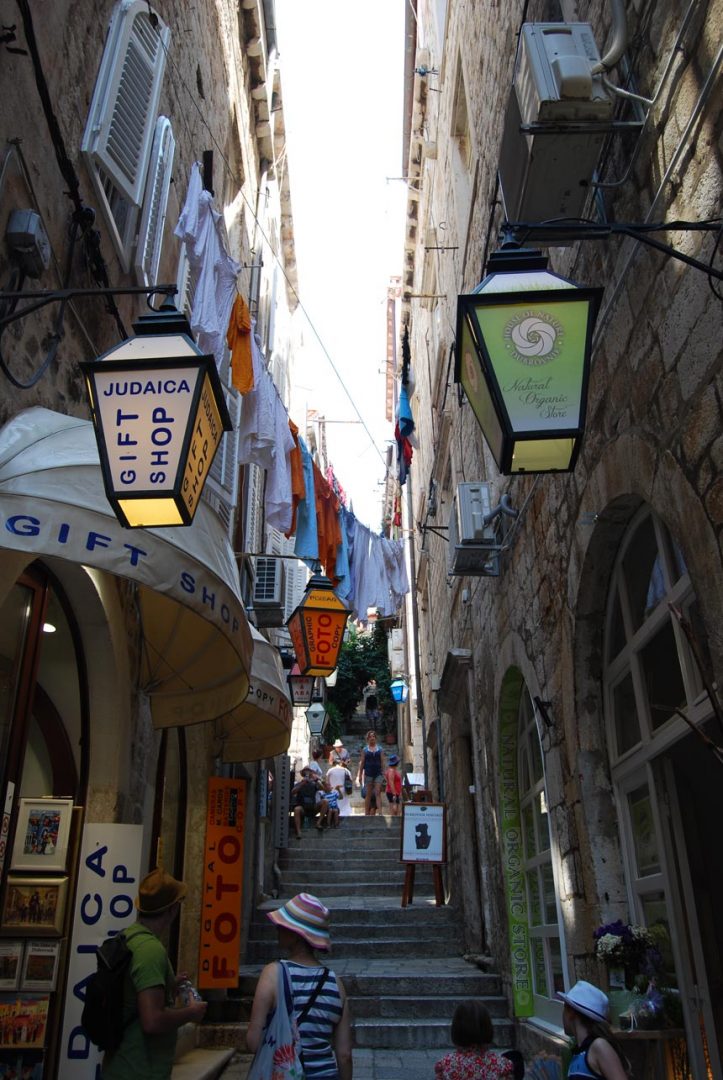 Walking through the streets of Dubrovnik

At its end the Stradun flows into Luza Square, surely one of the most evocative places of the city. When we pass from here next to the Orlando’s Column—a statue of a medieval warrior which is one of Dubrovnik’s landmarks—there are some stands selling traditional products.

Of course we stop by and taste everything we can: cheeses, jams, wines, liquors and arancini, that is, candied orange peel. Facing Luza Square are many tourist attractions, such as the elegant Sponza Palace, St. Blaise’s Church, the Cathedral, the Rector’s Palace and the slender clock-tower. 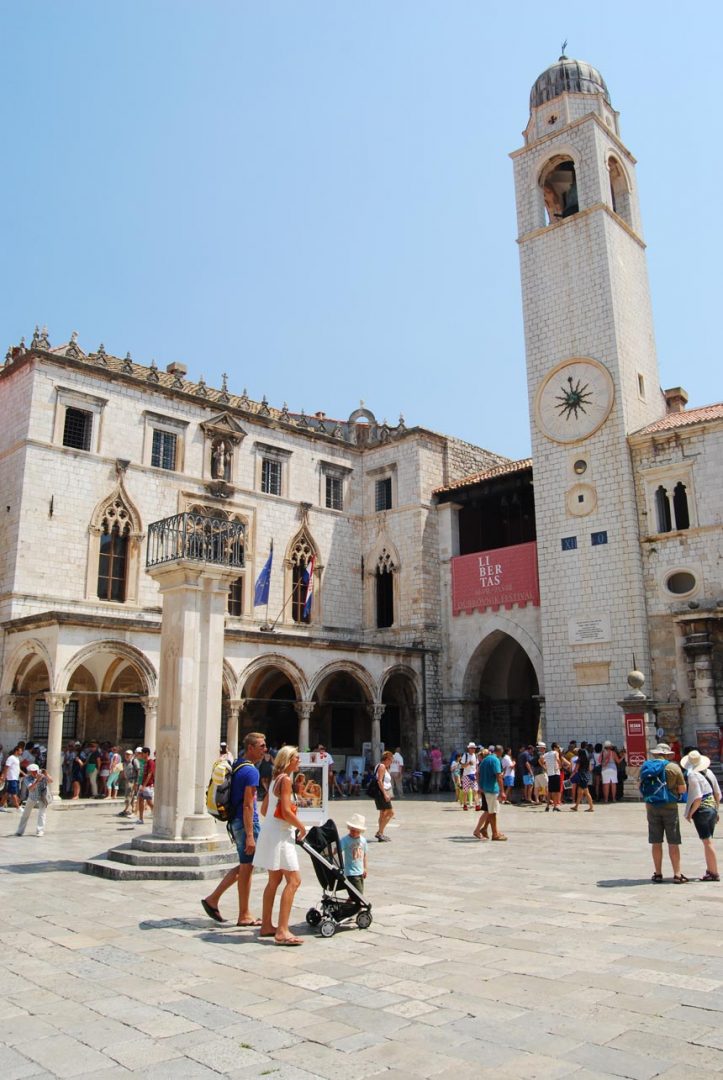 There are a lot of museums to visit, but due to lack of time, we manage to visit only the Rector’s Palace. This fine building used to be the seat of the Rector and the Minor Council, the institutions that governed the city between the 14th and 18th centuries, when Dubrovnik was an independent state, back then known as the Republic of Ragusa. The exhibits of the museum take us through the different stages of the city’s history and some of the rooms inside are even furnished and decorated to illustrate the refined lifestyle of times long passed.

The most emotional section, however, was a photographic exhibition of the 1991 siege of Dubrovnik.

Looking at the very same places we have just visited ravaged by explosions leaves us speechless. We find it hard to believe that we are in the same city as the one in those horrible photos. Dubrovnik’s recovery from the war is simply extraordinary. 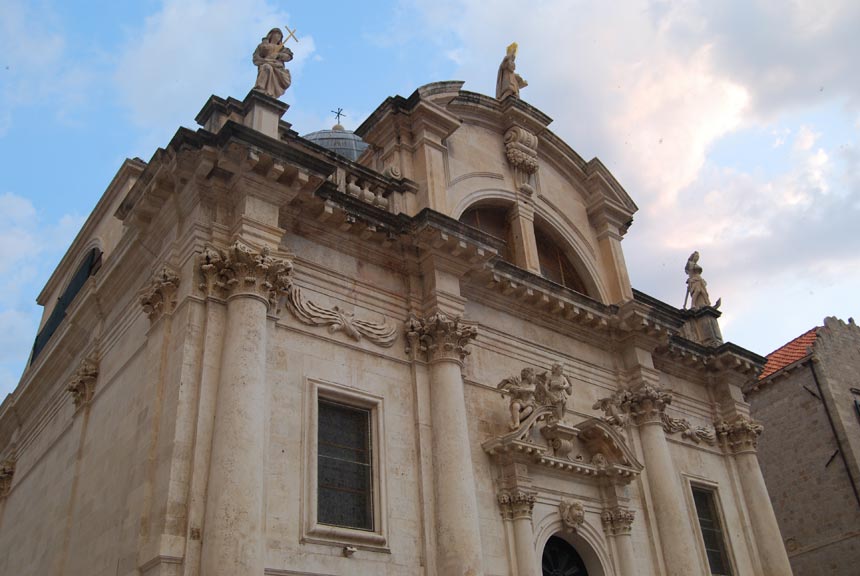 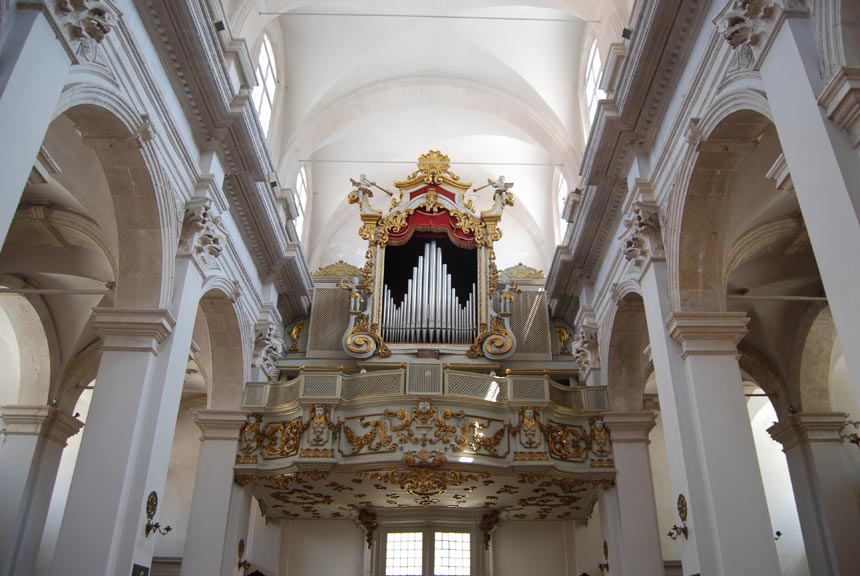 Interior of the Cathedral

After this cultural break, we decide to put aside the guide and the map and let our instinct lead us. Walking through an arched passageway we find ourselves in the little but graceful old port, protected by breakwaters and the massive fortresses of St. John and Revelin.

The size of these fortifications is justified by the fact that Dubrovnik owed most of its wealth to maritime trade. Back then the Republic of Ragusa was one of the naval powers of the Mediterranean, capable of rivaling Venice and the great neighboring empires. 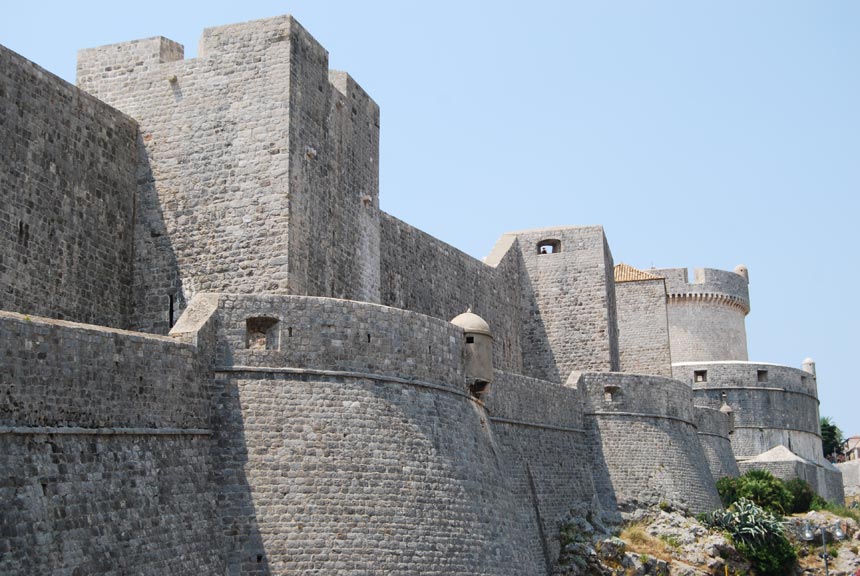 The city walls ending with the Minceta Tower 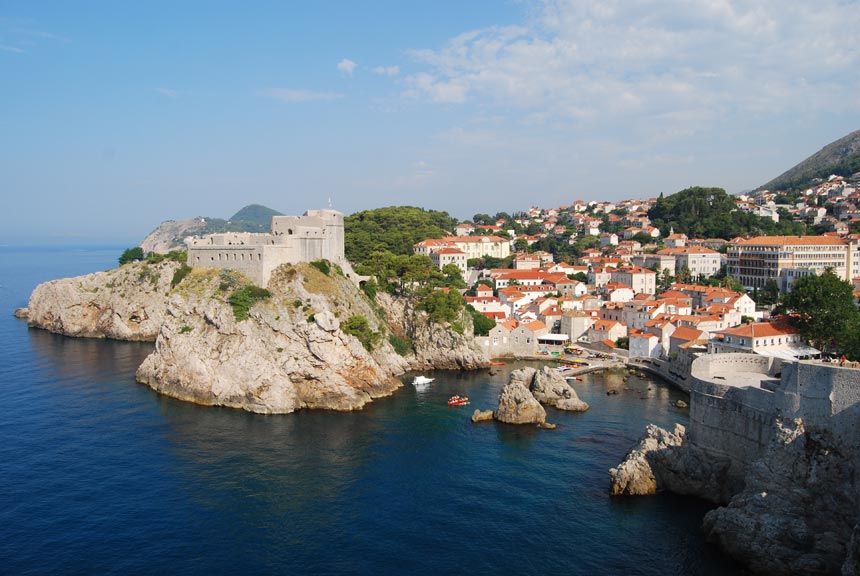 As we walk along the waterfront we are caught in a sudden downpour, one of those summer rains that last just long enough to refresh the air and quench the thirsty soil. At dusk, when the lampposts light up, the old city gets even more romantic. We can’t get enough of wandering around the maze of alleys, going up and down the long stairs, unraveling from the flat center towards the city walls.

Laundry hung to dry, flowered balconies and windows, lampposts, hidden little churches, atmospheric restaurants and art galleries… every detail is a verse in this living poem

Unwittingly, we come across other monuments, one of the oldest synagogues in Europe and the Baroque Jesuit Church of St. Ignatius, set atop a flight of stairs reminiscent of Rome’s Spanish steps.

The Walk on the City Walls

On our last day we defy the summer heat and decide to walk the city walls. To me and my travel mates this is the highlight of our trip to Dubrovnik. These impenetrable walls are what truly makes this city unique. No city in the world boasts such an impressive, well preserved system of fortifications.

The approximately two kilometers ramparts seem much longer as we walk under the fierce August sun, seeking shelter in every shady corner. From here we enjoy a totally different perspective of the city: narrow alleys, secluded courts, great palaces, churches’ belfries, huge towers, secluded coves, the azure waters and the red carpet of terracotta roofs covering the old town. 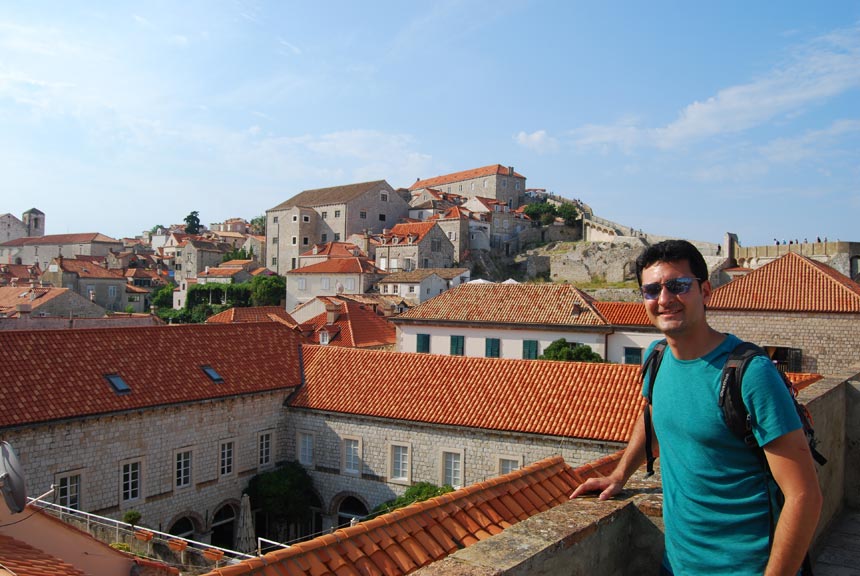 These photos: “We can’t help but linger to soak up the vistas.” 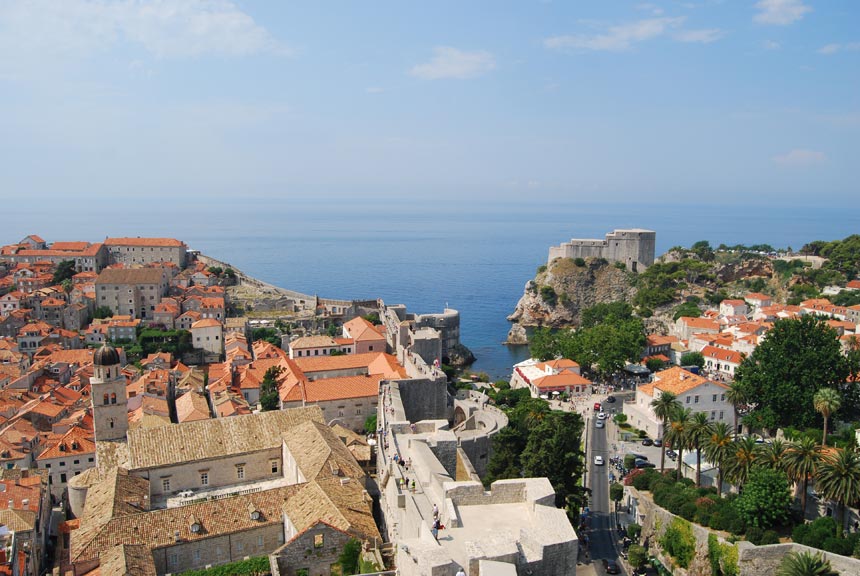 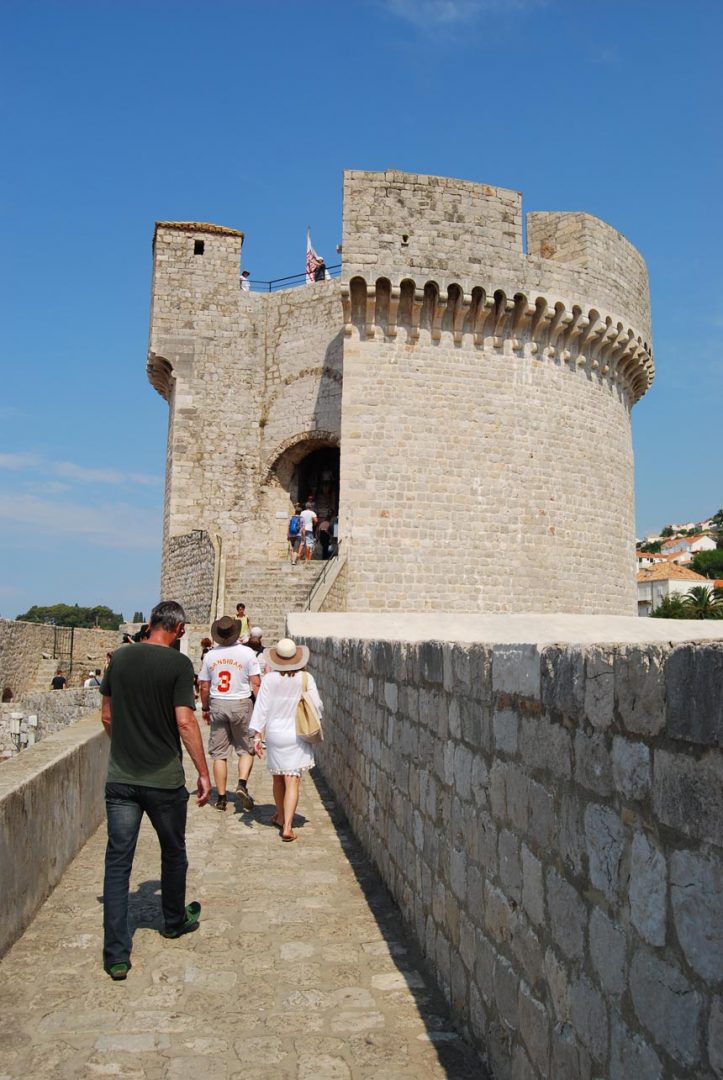 Every ten meters we are faced with another stunning glimpse and I persist in taking pictures although I am fully aware that there is no way to trap so much beauty in a frame. The city walls tour ends at the round Minceta Tower, the most prominent structure of the fortifications and also prominently featured in Game of Thrones.

The best way to kiss Dubrovnik goodbye is to take the cable-car that climbs up the hill Srdj, overlooking the city from its 400 meters.

It doesn’t matter if the tables of the café are all reserved, we don’t mind sitting on the ground to admire this marvelous panorama, stretching from the mountains to the sea, dotted by lush islands. Below us, the pearl grey walls of the city reflect the sunrays and for a moment Dubrovnik really looks like a pearl glittering on the shore of the blue Adriatic Sea. 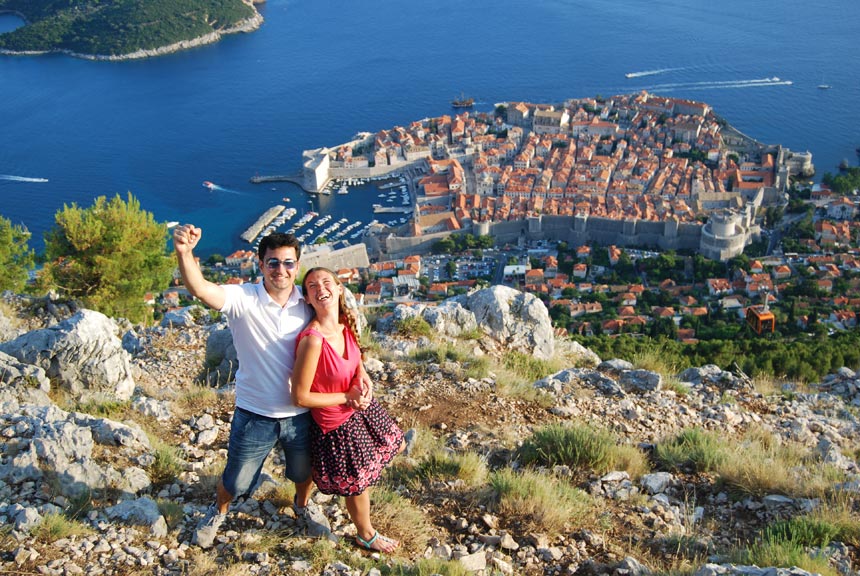 Dario and Angeliki, view from the hill!

In My Mother’s Eyes: In the Maliau Basin of Borneo | an Outpost Expedition