From its beginnings, eggplant soon gained popularity through Asia and the Near East. It’s no surprise, since eggplant boasts an appealingly mild flavour and spongy texture and is an ideal partner for sauces, spicy or otherwise. 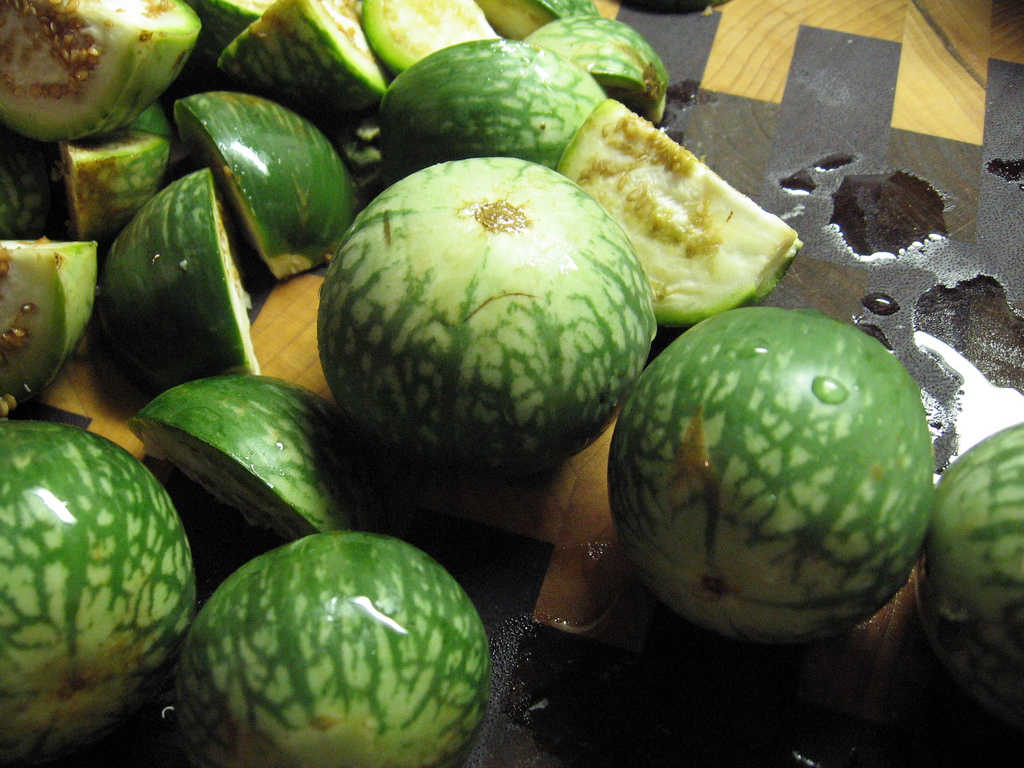 Eggplant arrived in Europe through the invasion of Spain by the Moors and via Italian trade with the Arabs, which had become significant in the 13th century. The first types to reach Europe featured an egg shape (hence the name ‘eggplant’) and included purple, yellow and off-white varieties.

Interestingly, Europeans, for a long time, considered the eggplant inedible, even giving it insulting names and growing it as a purely ornamental plant! But all that changed in the 15th century, when the abused veg started to slowly win over Europeans. By 1500, this now-globetrotting food was well enough known for the early Spanish and Portuguese colonists to bring it to America, where it became popular.

‘Eggplant,’ is not an apt name for the varieties sold in the west, since most of those types resemble purple truncheons or a bulbous pear-like shape. In Asia, varieties resemble smaller fruits, including pale green and white types which may be round or egg-shaped. In Southeast Asia, as well as China, India, Iran and Afghanistan, smaller, spherical varieties, including some no bigger than a grape, are the types often in markets.

Eggplant is a staple of the Thai diet, and, cooked fast and hot in a wok or skillet, lends itself beautifully to spicy treatments. The accompanying recipe originated in a Buddhist monastery in the countryside outside Bangkok. There, vegetarian monks regularly prepare eggplant with fresh basil and chile peppers.

Of course, the Thais don’t own a monopoly on the eggplant, which has been firmly established in regional cuisines—Greek moussaka (a layered casserole of eggplant, ground lamb, potatoes and bechamel sauce); babaganouj (grilled, pureed eggplant with garlic, lemon juice and parsley), and eggplant parmigiana (topped with melted grana cheese), in Italy; French Provençal ratatouille (tomatoes, onions and sweet red pepper);and the stuffed eggplants common to the Near East.

But the most colourfully named eggplant dish is Arab imam bayildi, which translates as ‘the priest fainted.’ The dish consists of eggplant stuffed with onions or tomatoes and cooked with olive oil. As for its name, one story holds that the priest fainted because the dish was so delicious; the other says he fainted when he heard how much oil had been used. We think the priest would have heartily approved of our recipe for spicy Thai eggplant with basil and chile pepper.

Thai Eggplant with Basil and Chiles

Fragrant with garlic and fresh basil, and sparked with chile pepper, this scrumptious eggplant dish could work as a vegetarian meal for one or as a side dish for two to three people. If more heat is desired, increase the amount of chile.

A Walk Through Medieval Prague | in the Czech Republic

Four Oceans, No Planes | The Lao-Chinese Bus Ride From Hell