A Jungle Trek to El Mirador, the Ancient Lost City of the Maya

Nothing makes a person feel more Lara Croft (or Indiana Jones) than trekking through jungle to an ancient Mayan city.

Story and Photos by Sue Bedford

My friend Pete and I arrived in Flores, Guatemala with a typical itinerary in mind: a day trip out to Tikal to hike up the pyramid’s iconic stone steps, followed by a couple of afternoons spent lazing on the dock with our toes dangling over Lake Petén Itzá.

But all that changed that night at dinner when we met Sarah, a 26-year-old field hydrologist from the United States.

“Everybody goes to Tikal,” she informed us, waving a forkful of frijoles refritos. “If you really want to get off the beaten path, you should come on the two-day jungle walk to El Mirador.”

The Guatemalan rainforest canopy, with a Mayan pyramid in distance covered in overgrowth.

She explained that El Mirador had been a bustling Mayan city capital before its abandonment nearly 2,000 years ago. Although numerous pyramids and tombs were still intact, its remote location meant that it was largely unexcavated and thus rarely visited by tourists.

Pete and I were quick to agree to the adventure; I soon discovered, however, that Sarah’s use of the term walk had been somewhat liberal. In actual fact, we scrambled, crashed and occasionally squished our way through the forest. 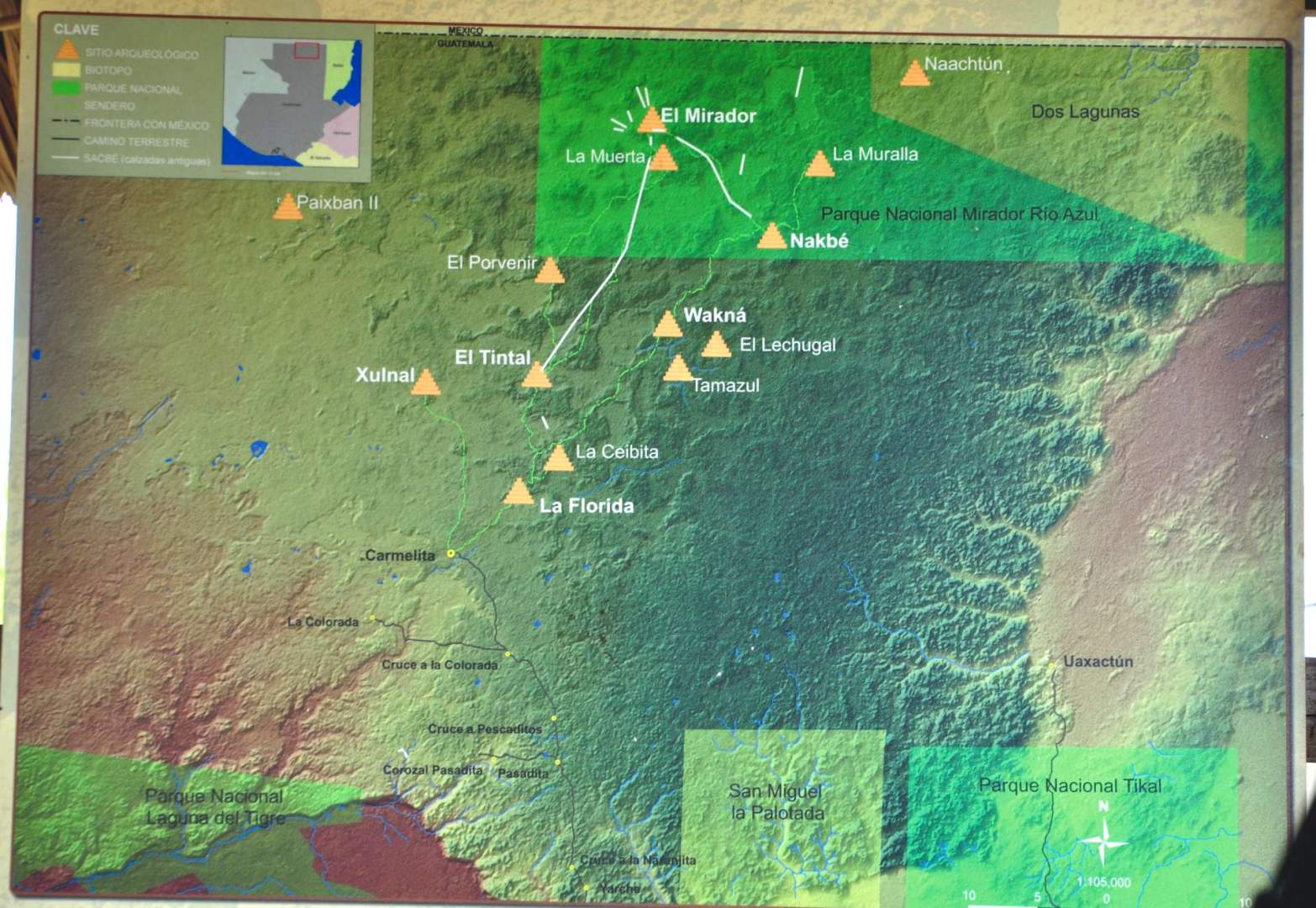 Carmelita is a launching point for a trek to El Mirador and the last roadside stop.

Mud sucked at our sneakers as verdant palms waved at us like gigantic hands and tree roots pooled in fissures like split spaghetti. Howler monkeys roared overhead and tarantulas scurried in the dead leaves as we teetered above swamp water on partially submerged logs.

Our trek was led by Alex—a spry Guatemalan who could shimmy up a vine in seconds flat—and included three other intrepid, sweaty backpackers: Matt, Sam and Rébéka. It was late that first afternoon when Alex announced our arrival at a pyramid that was part of El Tintal, an archaeological site approximately 25 kilometres from El Mirador. 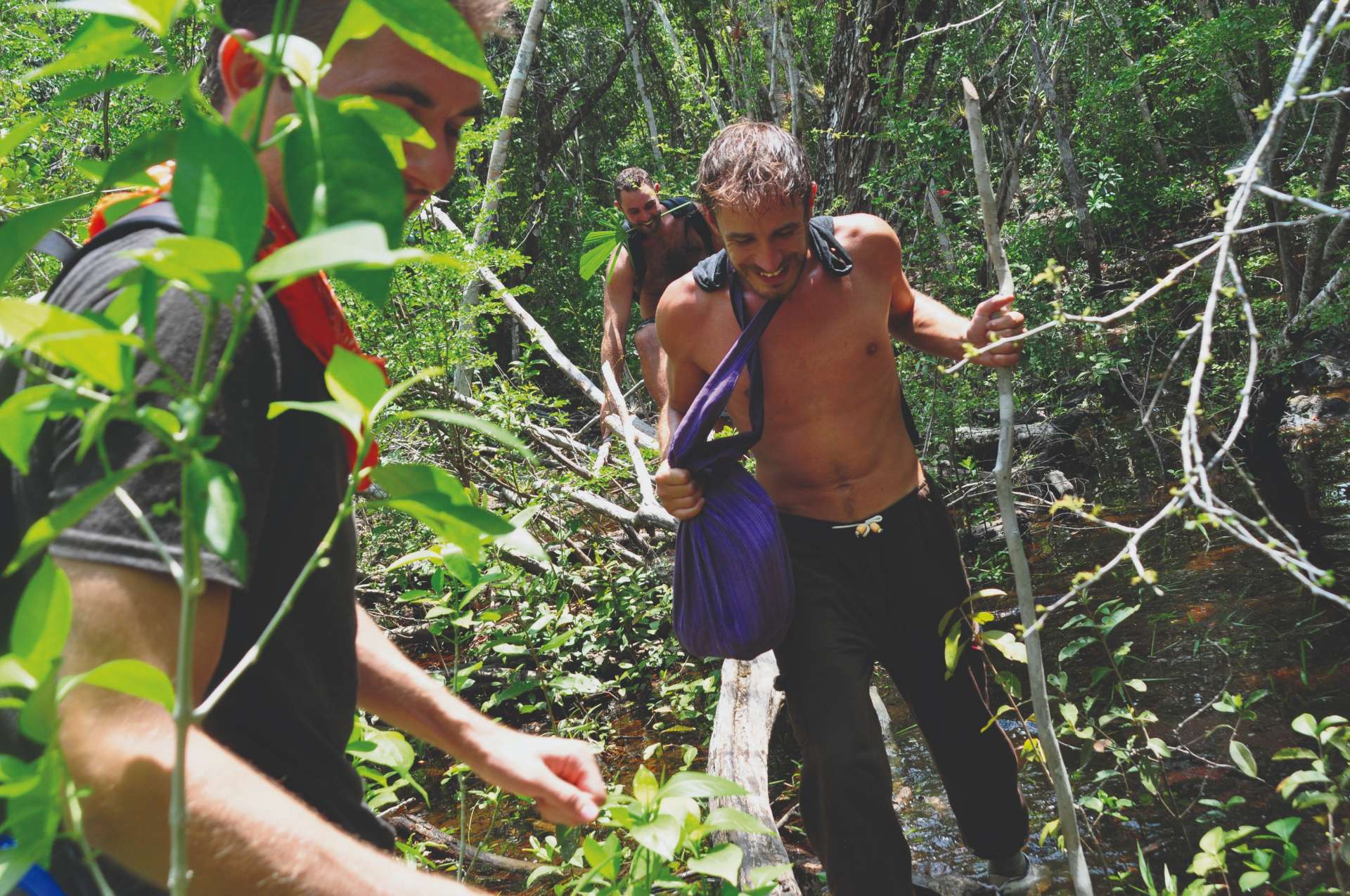 It’s a d-day trek through thick Guatemalan jungle to get to El Mirador.

A large knoll sheathed in trees sprang sharply from the ground, and we huffed and puffed up the stone stairs notched into the earth. At the summit we were rewarded with a breathtaking view of the forest canopy blanketed out below, and a sky blushing with the corals and crimsons of sunset.

Despite our sublime surroundings, Pete was frowning. “I don’t see this pyramid.”

“That’s because you’re standing on it,” said Sam, who then pointed at what looked like a jungle-clad volcanic peak in the distance. “That’s another one over there. They just haven’t been excavated yet.”

We clambered back down and pitched our tents as the rainforest transformed into a cacophonous symphony of nocturnal buzzes, shrieks, wails and crashes. As I brushed my teeth, the light from my headlamp reflected off what I thought was dew glistening in the grass but turned out to be the sparkling eyes of hundreds of spiders. 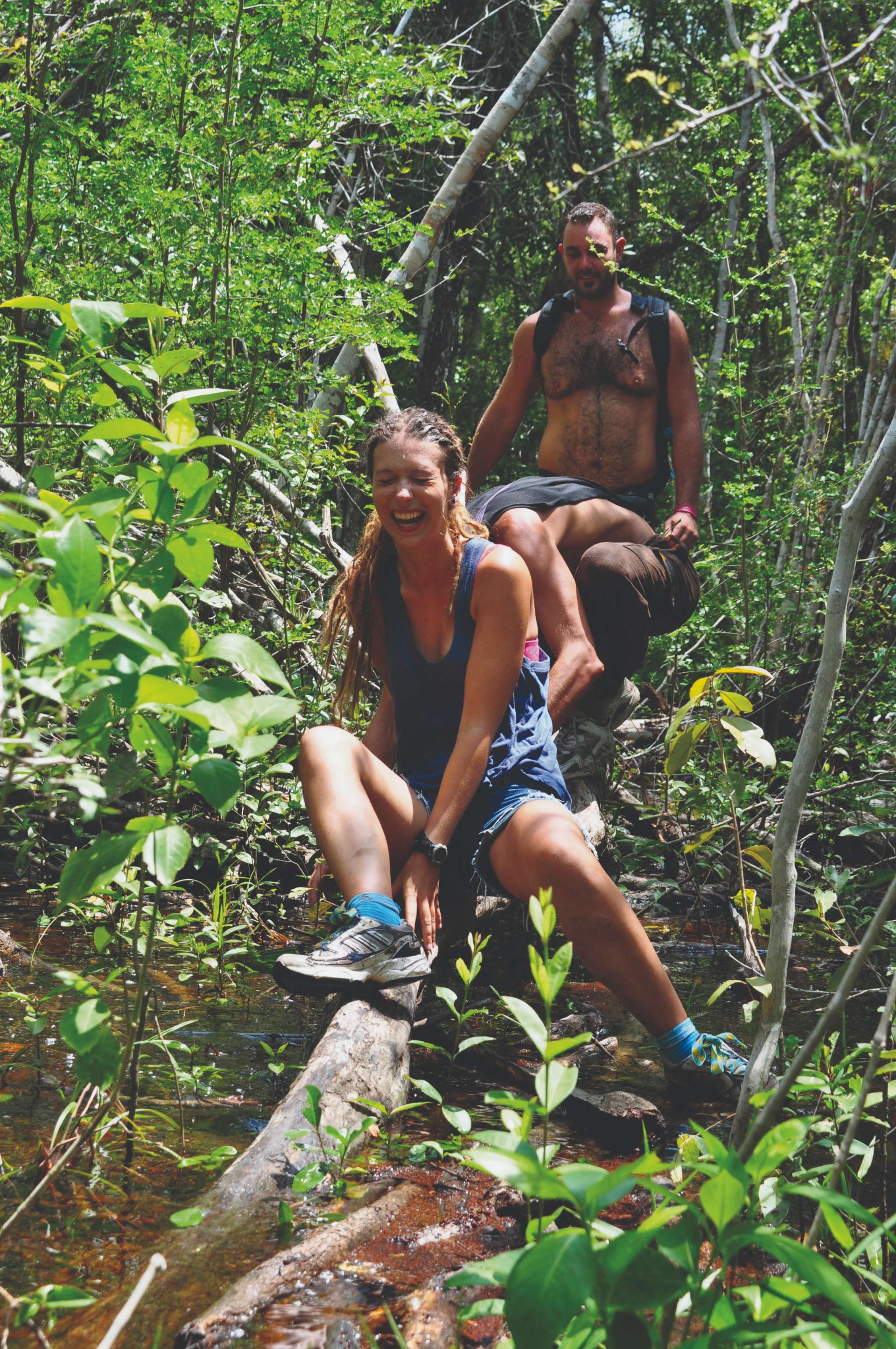 The author pauses for a break!

We arrived at El Mirador on the eve of our second day and set out to explore the following morning. Our first stop was La Danta pyramid. Although the plaza that the pyramid sat upon remained deeply buried, the limestone steps were much more distinguishable than those of El Tintal. A rickety wooden staircase led us to the top, where the view across the Mirador Basin was as jaw-dropping as it was knee-buckling. 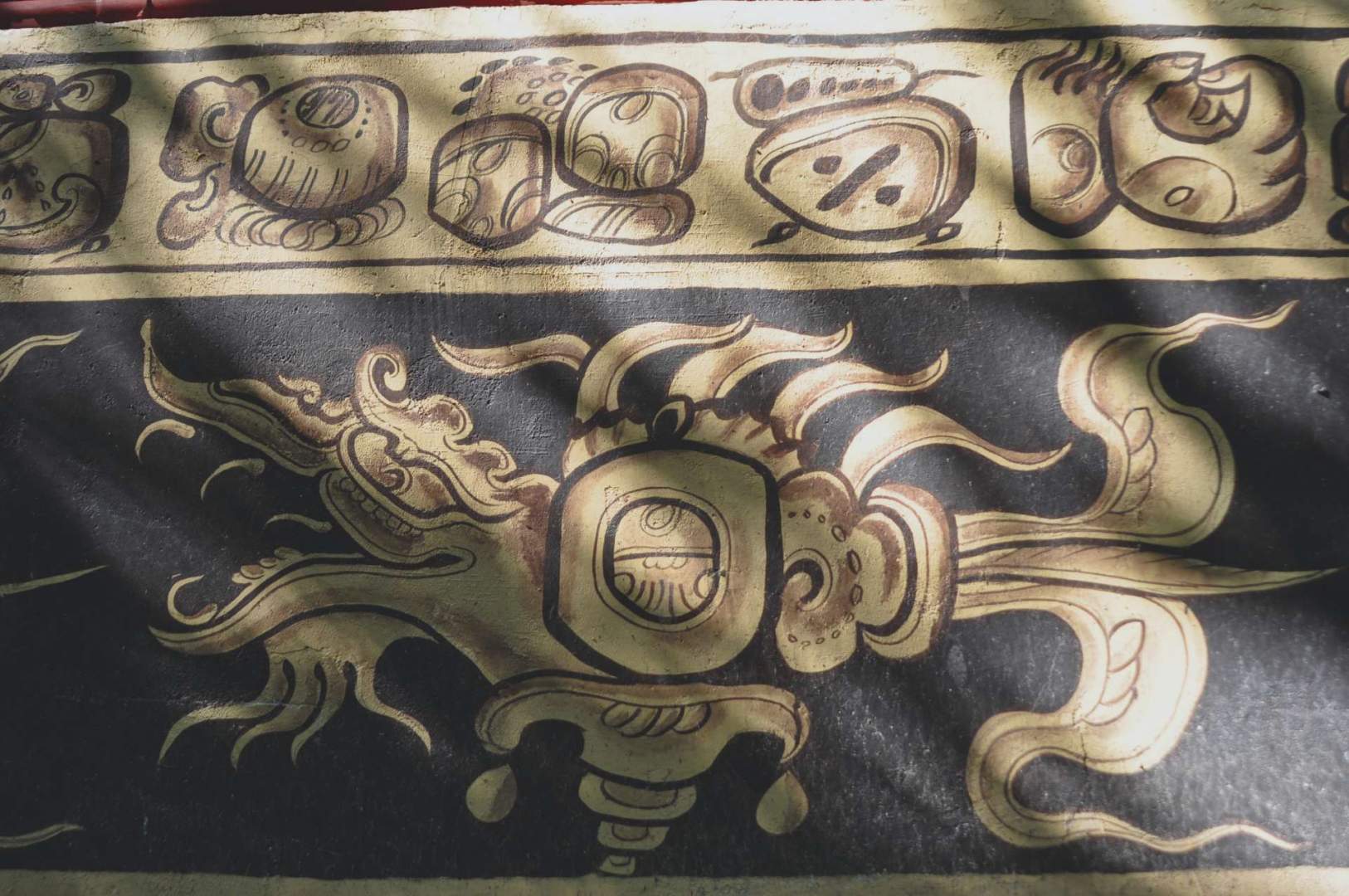 As the archaeological field season had wrapped up for the year, we had the site to ourselves. Alex took the opportunity to show us one of the most astounding finds at El Mirador: the Popol Vuh relief. Based on the Mayan creation myth, the 2,200-year-old relief had been carved in stucco on the side of a channel that funnelled rainwater into cisterns, and was amazingly well preserved. 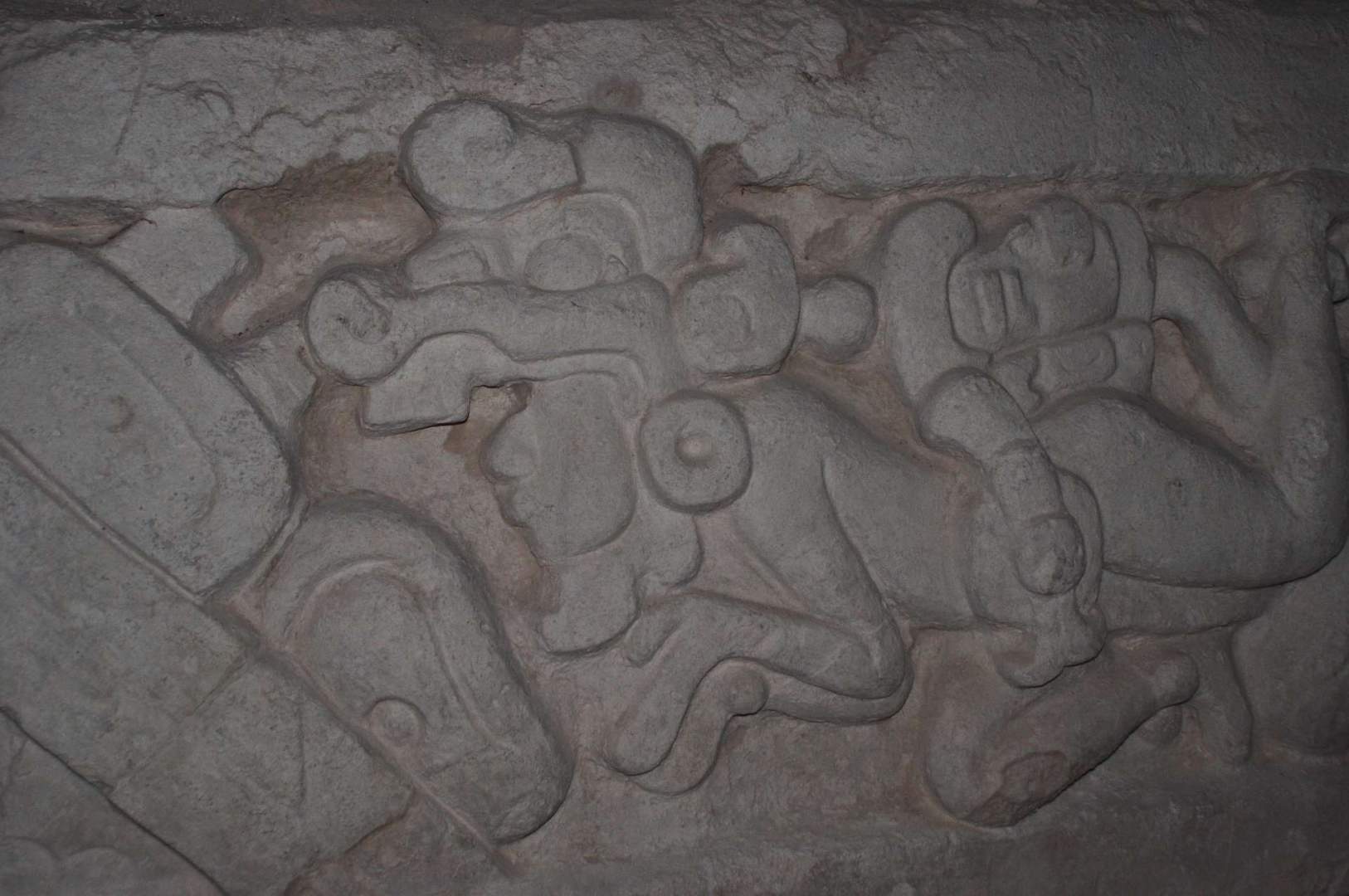 Detail of the Popol Vuh panel of the Grand Acropolis at El Mirador, depicting part of the Mayan story of creation, thought to be 2,300 years old.

Near the relief, an inconspicuous piece of plywood leaned against a limestone wall. With a mischievous glint in his eyes, Alex beckoned us over with one hand and removed the plywood with the other, revealing a dark hole vanishing downwards into oblivion.

Matt translated our guide’s lightning tongued Spanish. “It’s a tomb,” he said. “We can go inside.”

Alex went first, and my heart thumped wildly as I watched his head suddenly disappear into the blackness. Sam and Matt followed. “It’s a bit of a drop,” Sam then called up to us.

And then it was my turn. I sat on the edge of the hole and braced myself with one leg on either side of the crumbling shaft. At first, I tried to climb down inch by inch, but there was little footing and my legs scraped against the rocks. Finally—and against all natural instinct—I followed Sam’s advice and allowed myself to blindly fall, hoping that mine wouldn’t be the next dead body to lie in the ancient grave. 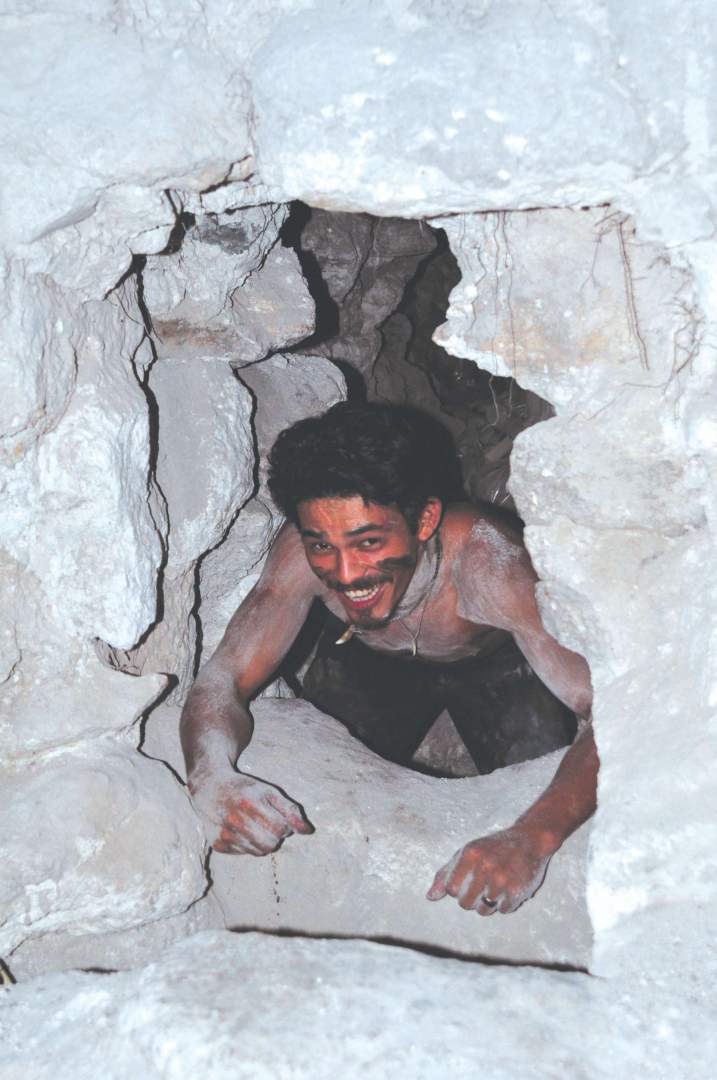 Exiting the cave, covered in chalk.

I landed safely, with a gentle thud. Crouching down, I saw a short, narrow tunnel stretching outwards where Sam, Matt and Alex were huddled by the beam of Alex’s flashlight. As I crawled toward them, limestone fragments cut into my palms and knees. The air grew cool, dank and musty.

“Everything has already been removed from here, either by the archaeological team or by looters,” explained Sam.

Matt ran his hand along the wall, and a piece broke off in his fingers. “What do you think the chances are of this caving in on us?” he asked. Alex shrugged.

“On that note, how about we let the others get in here?”

Suddenly, the tunnel felt incredibly small. I turned around and, with my eyes fixated on the dusty shaft of watery daylight, scurried back towards the hole. I pulled myself up as best I could—my fingers slipping off the sharp rocks—and then Matt gave me a boost from below while Pete grabbed my wrists and hauled me out.

“You look like you’ve seen a ghost!” he joked, as I coughed and blinked. “You’re all white!”

It was true—the powder from the stone had left me looking like I had lost a battle with a flour bag.

It was another two days’ journey back to Carmelita, the town we’d started in. En route, Alex explained that the full excavation of El Mirador would take decades, if not a century. Road construction was prohibited in the Mirador Basin to protect the rainforest, and so the dig’s progress was painstakingly slow. 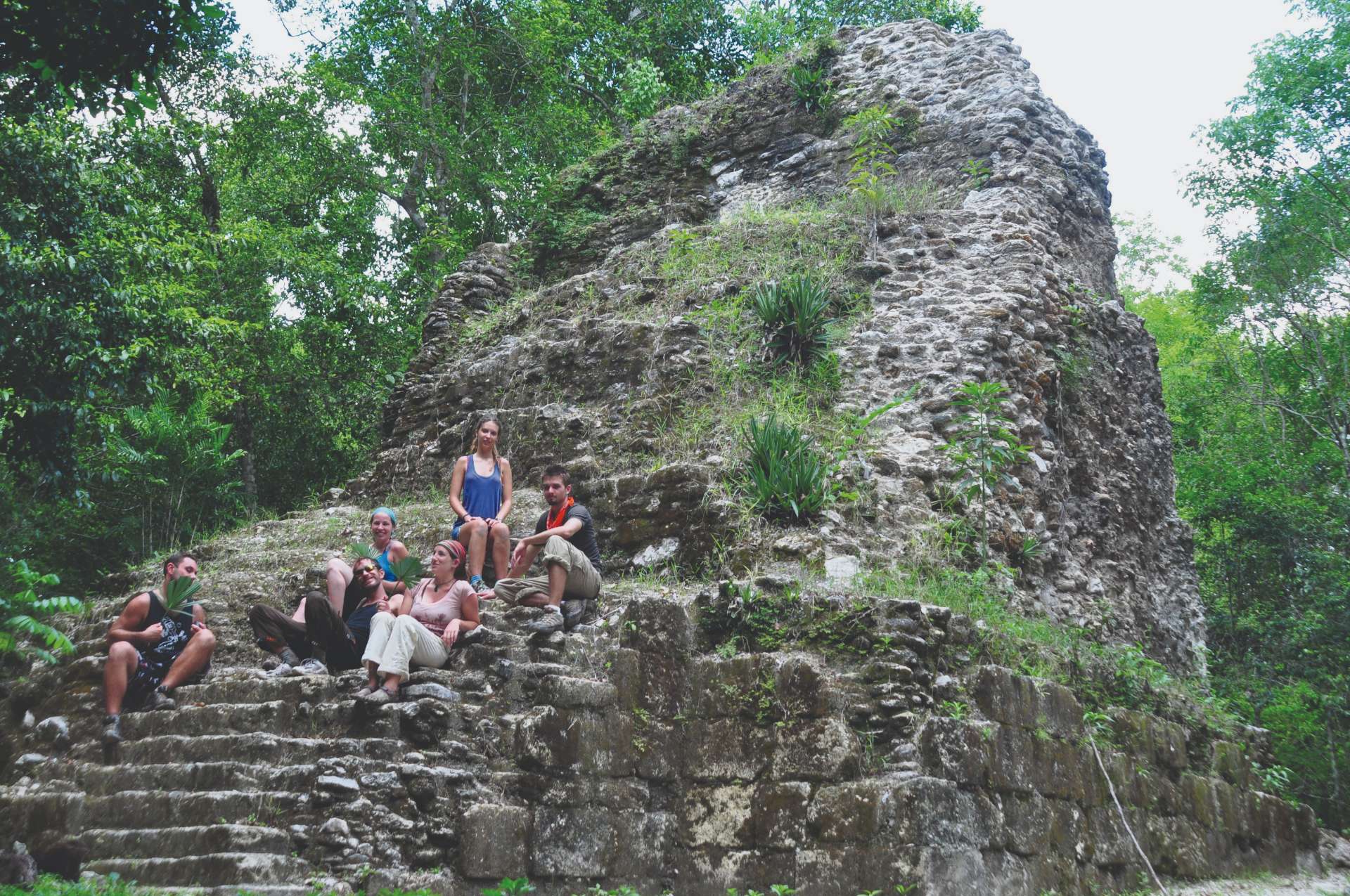 One of the Mayan pyramids at El Mirador. Much of the archaeological site remains unexcavated, and may take decades or centuries to uncover.

As we traipsed through the steaming jungle with mosquitoes tickling our necks, I wondered if in the future El Mirador would be recognized as a wonder on the same scale as Jordan’s Petra or Cambodia’s Angkor Wat.

It was thrilling to think that we had been standing on what could potentially be hailed as one of the greatest ancient marvels ever constructed—concealed from the world by a blanket of mud and foliage. **

Llama Trekking in the Highlands of Pariaqaqa, Peru | In The Land of Ayni: Part 3

In Search of Nanabijou—Sleeping Giant Provincial Park | an Outpost Expedition

Laaaaaaaambie! Neat story, I can’t help but remember the heavens opening to our absolute delight while we all raindanced in pure glee. A magical moment.

PS: I was reminded of you just now when I saw a video asking “how do hamsters fitnso.mucj food in their cheeks?”. Miss your face, hope you’re keeping well Miss.