In the second installment of his special dirty gravel bike series, where he sets out to cycle and explore the rail trails of southern Ontario, Rob Brodey takes on the Elora Cataract Trailway.

It’s still hard to believe that we’re in our second year of the pandemic. And for me, at least, this is the second year in a row I’m not hopping on a plane to travel (though, with widespread vaccinations, things are looking up!).

Hence, I’m spending another summer closer to home. I recognize that part of my inspiration for exploring the province’s rail trails on a gravel bike is to combat the notion that my life remains on hold until the pandemic ends. Life, of course, never stopped, and neither should we. Things may be different, of course, but I’m still striving for personal growth and renewal.

So how does changing our scenery and perhaps doing something new help wake us up from the lulling grind of the pandemic? As I wrote about in my feature on wanderlust in Outpost magazine (Issue: 122/Summer 2018), while repetition dulls ours senses, novel experiences give our brains a kickstart, a buzz. Known as the “orienting reflex,” the new stimuli compels the mind to focus, which, from an evolutionary perspective, helped keep us alive by alerting us to potentially risky unknowns. In non-lethal situations, this new experience makes life feel more vital, exciting, and memorable. 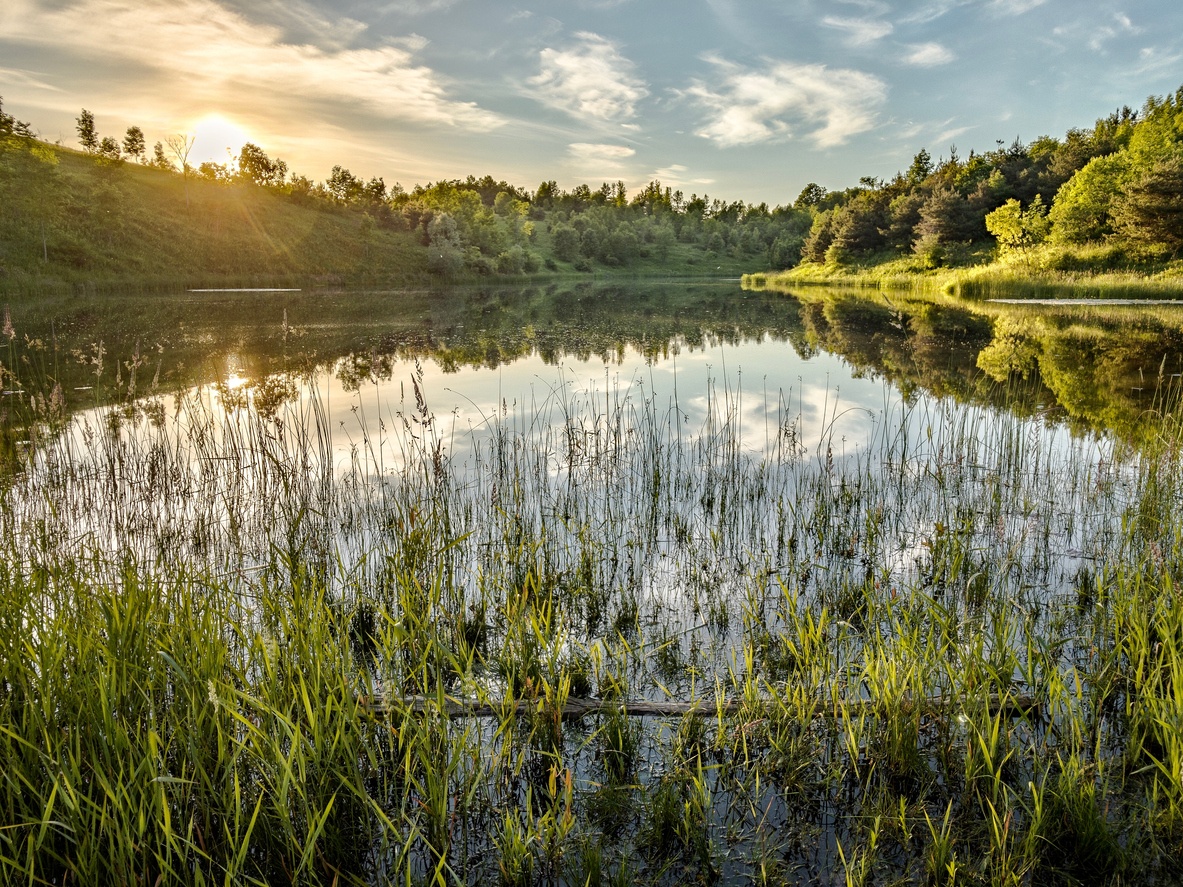 My latest mini-adventure has me driving northwest of Toronto to the scenic Forks of the Credit in Caledon, which will be my launching point to link up to the nearby 46-kilometre Elora Cataract Trailway, which runs from the Cataract Falls to the town of Elora (my plan is to yo-yo up and back the full length of the trail).

The Cataract trailhead actually sits at the top of the Cataract Falls, which sends tons of water thundering off the Niagara Escarpment. The escarpment itself is an impressive 725-kilometre-long rocky ridge that runs from New York state up through Ontario, then onward to Michigan, Wisconsin, and Illinois. 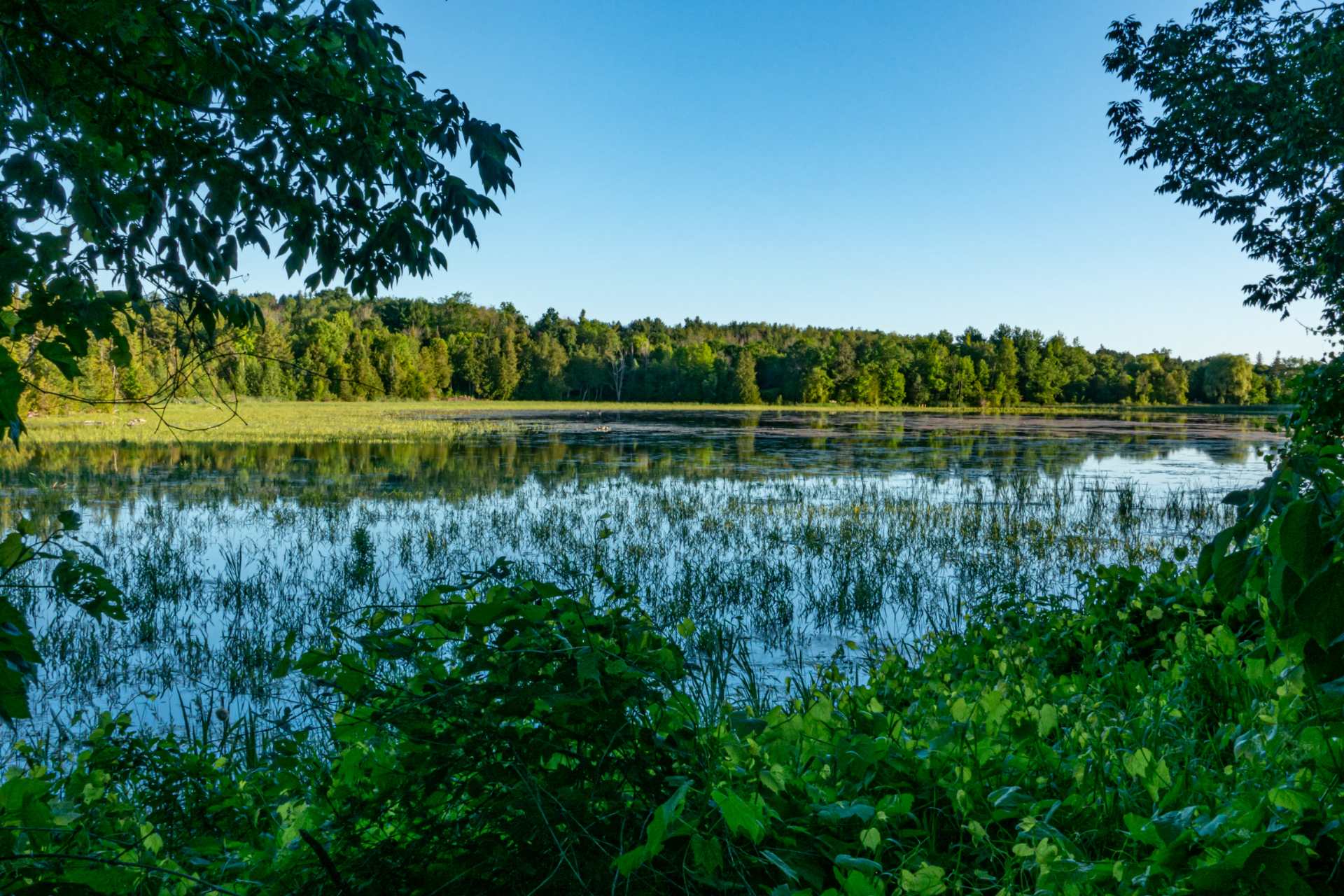 The Grand River watershed is one the largest in southern Ontario, with the river itself running about 280 kilometres.

According to the Bruce Trail Conservancy, the Niagara Escarpment began to take shape almost half a billion years ago and was part of a tropical seabed (it’s now a UNESCO World Biosphere Reserve).  The Cataract Falls may be voluminous, but the largest and most famous waterfall on the escarpment is, hands down, Niagara Falls.

In spite of this natural splendour, a proposed mega quarry (up to 900 acres and 100 feet deep) is set to start blasting and digging just a few metres north of the trail, along the northern boundary of the Forks of the Credit Provincial Park, which is a cause for concern on many levels, including protecting sensitive ecosystems. 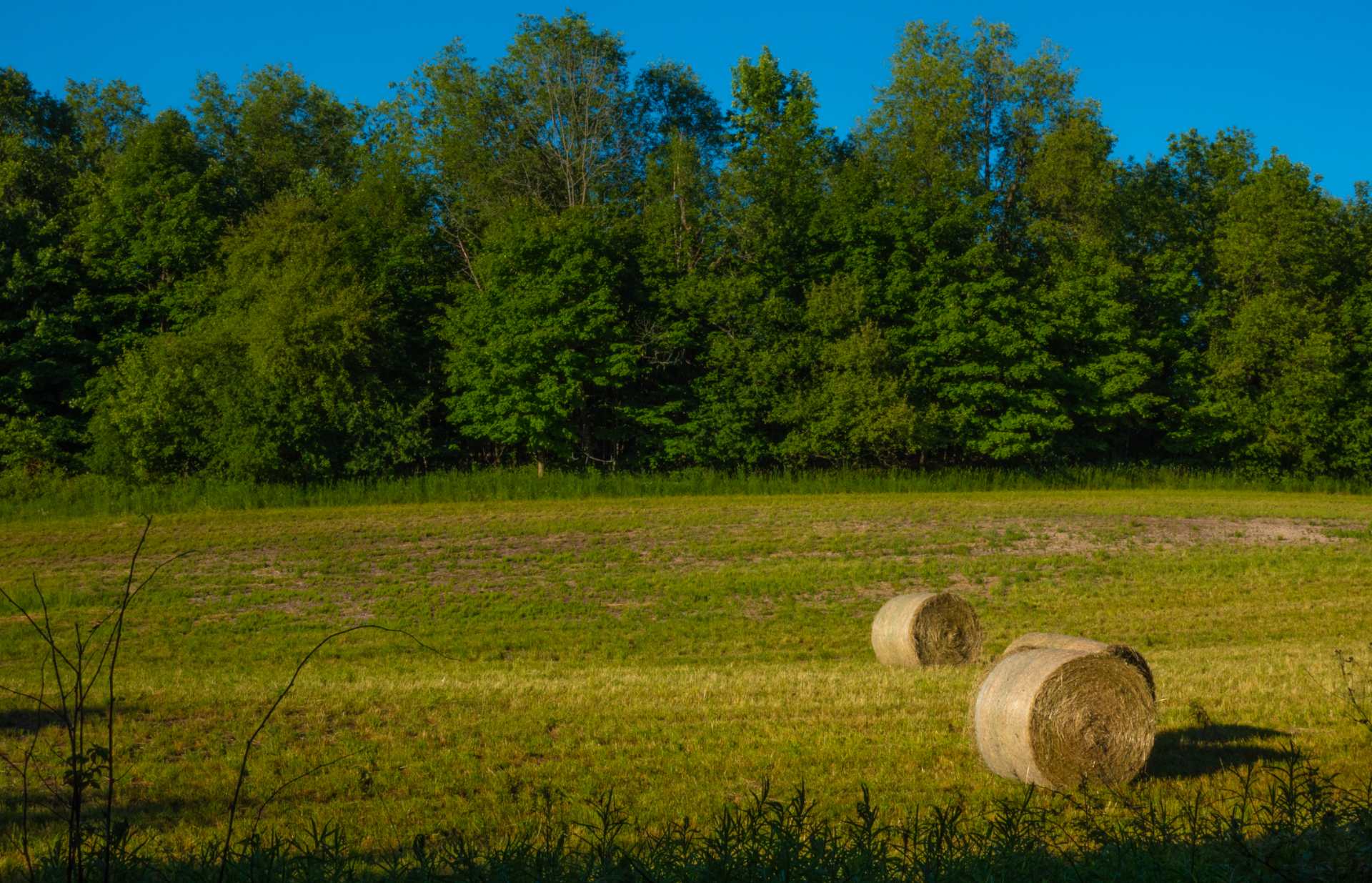 “At times, the trail dives into deep dark forests, then out to sun-kissed fields of young corn and an assortment of other crops.”

After a steep twisting climb out of the valley, it’s all flat easy cycling along the rail trail. Even in June, though, it’s cold enough at this hour to crimp my hands with cold. But it’s a minor nuisance, given I have the trail all to myself — with the exception of dozens of rabbits that crisscross the path as I ride.

There is a lot to love above these rail trails. A work colleague, Ioana, who told me about the rail trails last year, broke-down what she likes so much about them. “There is no traffic, clean air, beautiful scenery, and during this pandemic it has been the main activity for the weekends in the warm season.”

I settle into a comfortable rhythm, my body and spirit fed by my natural surroundings. At times, the trail dives into deep dark forests, then out to sun-kissed fields of young corn and an assortment of other crops.

After around 30 kilometres, I arrive along the banks of the bountiful Grand River and follow it south. It’s along this stretch that I find a sizeable turtle chilling on the path, half emerged from a hole (perhaps a female constructing her nest to lay eggs). 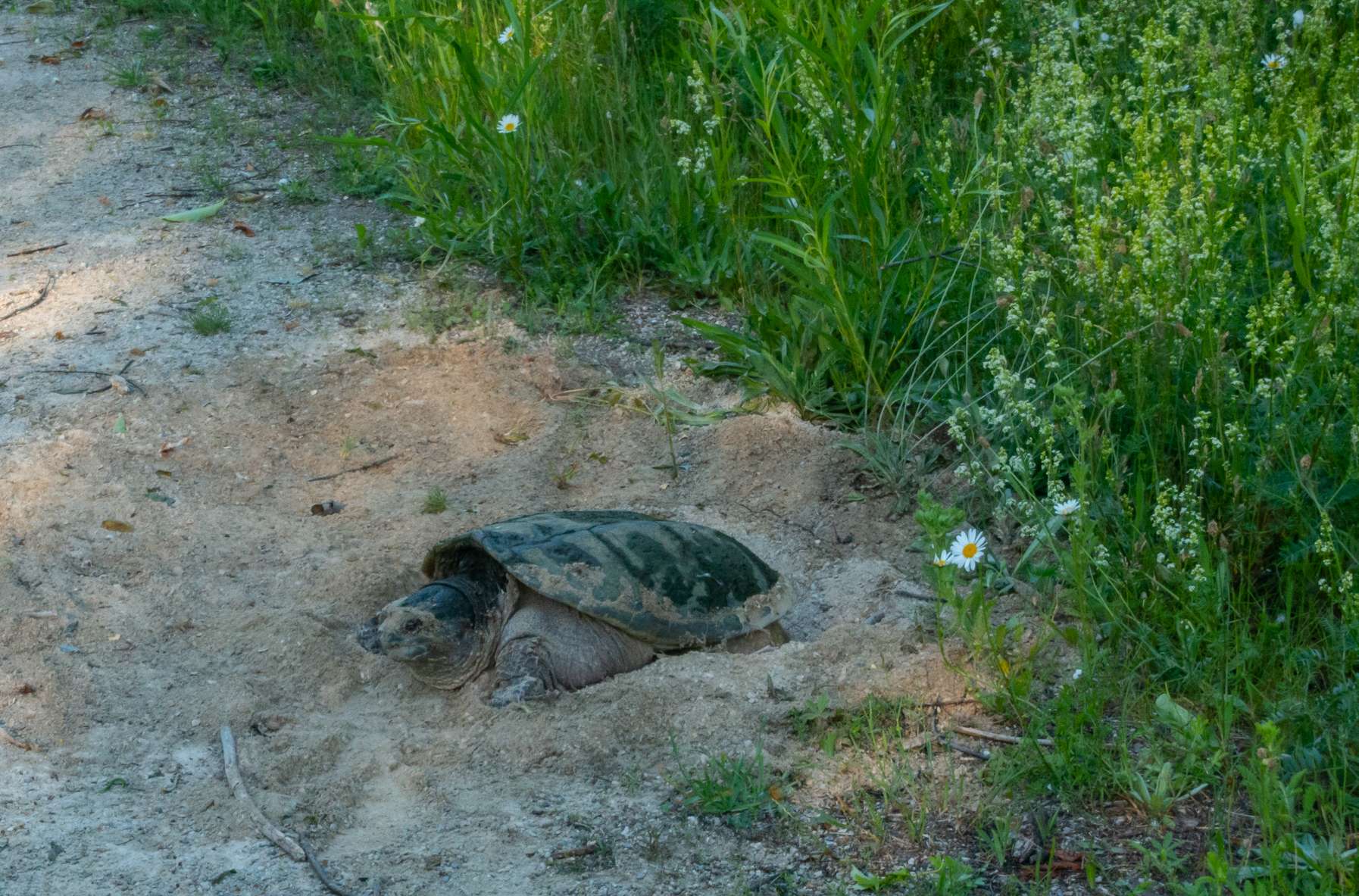 Rob spots a “sizable” turtle at about the 30-kilometre mark along the trail.

I marvel at her for a few minutes, then continue for another 8 kilometres until I cross the dazzling heights of the Shand Dam at the head of Belwood Lake.

From this vantage, it’s clear that one of Ontario’s greatest natural gifts is its plentiful fresh water — held in lakes, rivers, and subterranean reservoirs. Apparently, the province contains a staggering 250,000 lakes, which represents about one fifth of the total freshwater in the world. This life-giving water has provided the foundation for continuous habitation for thousands of years, while the waterways offered an efficient mode of movement across the region. 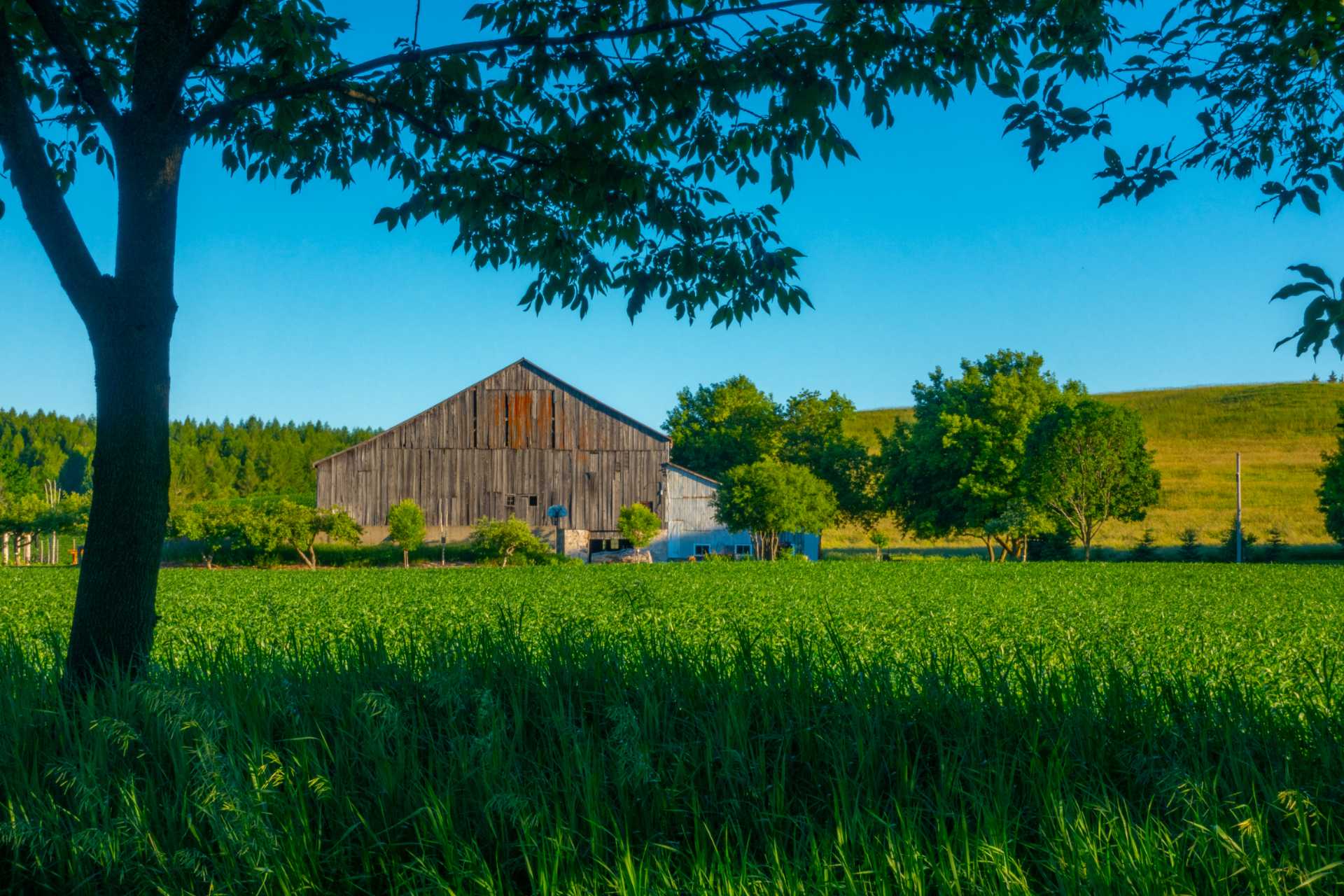 There’s a lot to love above these rail trails: no traffic, clean air, beautiful scenery, and a welcome relief from prolonged indoors life.

I approach Fergus, a quaint treelined town, straddling the Grand River. The old buildings at the centre of town provide a clue that this community has lots of history. But to go deeper, one must do some digging. It was originally named  “Little Falls” by Scottish settlers, who arrived in the area in 1833. Even today, the town hosts the annual Fergus Scottish Festival.  But before the town came into existence, it was settled by Richard Pierpoint, an extraordinary man who lived an extraordinary life.

It should be noted that this territory was historically inhabited by various Indigenous groups through the millennia, and then was granted to the Six Nations of the Grand River Territory by the British in 1784 for their support during the American Revolution — though it should also be noted that hundreds of years later, many Indigenous land claims in the region remain unresolved.

Back to Mr. Pierpoint. There really isn’t enough space here to do him justice, but, in my humble way, I will try. In short, Pierpoint was from Bundu (present day Senegal, West Africa) but was captured and enslaved in 1760 at age 16. He survived passage in the slave hold of a ship and lived in bondage in North America. Then, during the American Revolution (1776), Pierpoint, like many enslaved people, was “offered” freedom if he fought on the side of the British against the revolutionaries. After the British defeat, Pierpoint settled in Upper Canada and worked as a labourer and as an advocate for the burgeoning Black community. 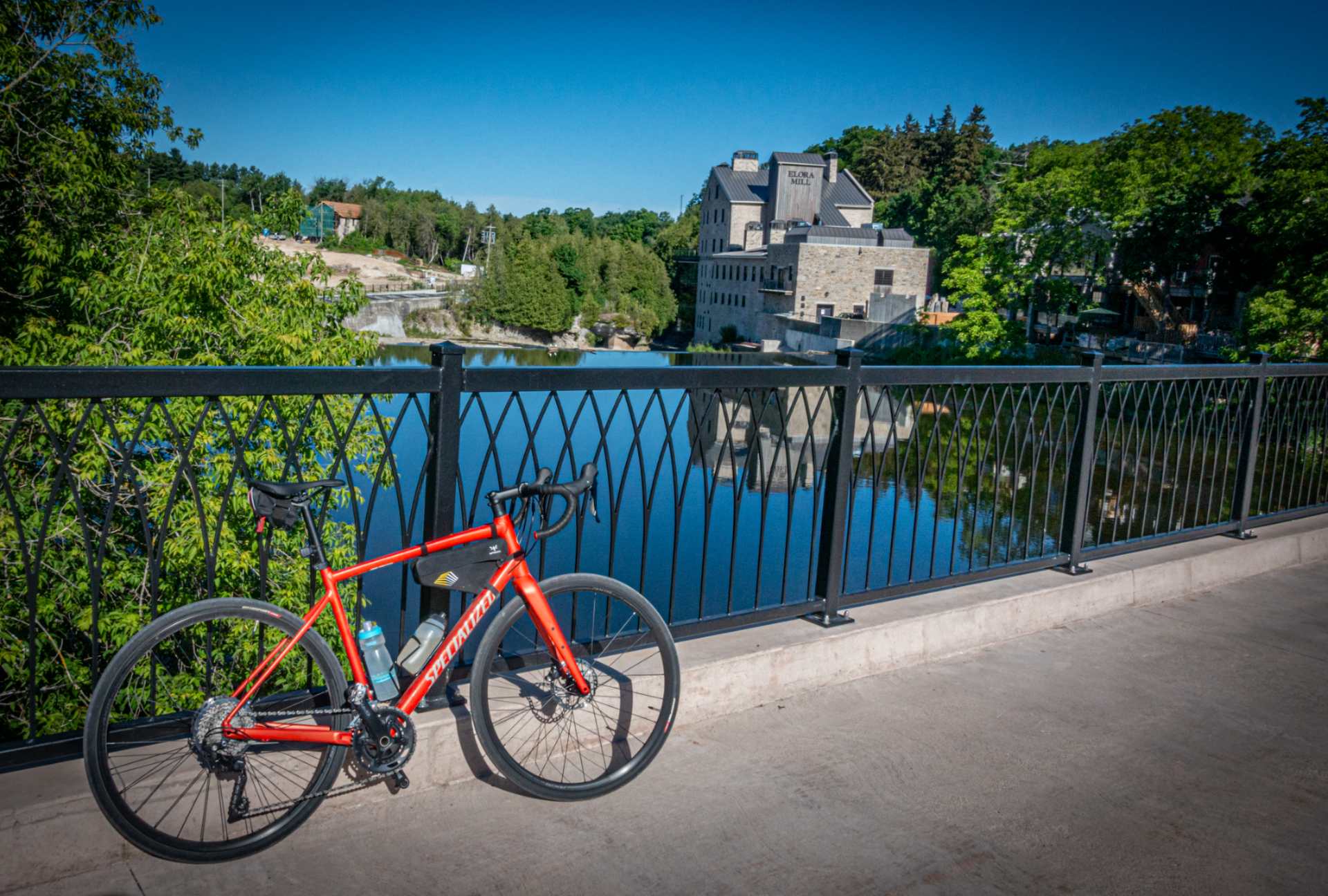 Rob arrives in Elora, famous for its picturesque limestone buildings, including its old mill. Now to turn around, and go back!

Then, in 1812, war broke out between Britain and the United States. Despite being 68 years old, Pierpoint helped form a militia of free Black men known as “the Colored Corps” and served from 1812 to 1815 — in the hope of improving the standing of Black people in Upper Canada. After the war, he was granted 100 acres on the Grand River (in or near present-day Fergus).

But Pierpoint wanted to live out his remaining days in his homeland in West Africa, and requested passage home in exchange for the land grant. His petition was rejected, and he made a life for himself on the Grand River in what became known as the Pierpoint Settlement. (Here’s a link for more details of Richard Peirpoint’s incredible story.)

To me, the history of this area is a reflection of Canada’s history — complex and multi-layered, with infinite stories of tragedy and pain, but also heroics and the human spirit. It’s also a reminder of the importance of history being recorded from many vantage points to tell a more complete story.

I may be staying closer to home these days, but I feel like I’m travelling through new worlds. Not only has gravel biking along Ontario’s rail trails given me a more intimate experience with the landscape, but each kilometre seems to reveal another story, giving me a deeper appreciation of the region’s immense history. 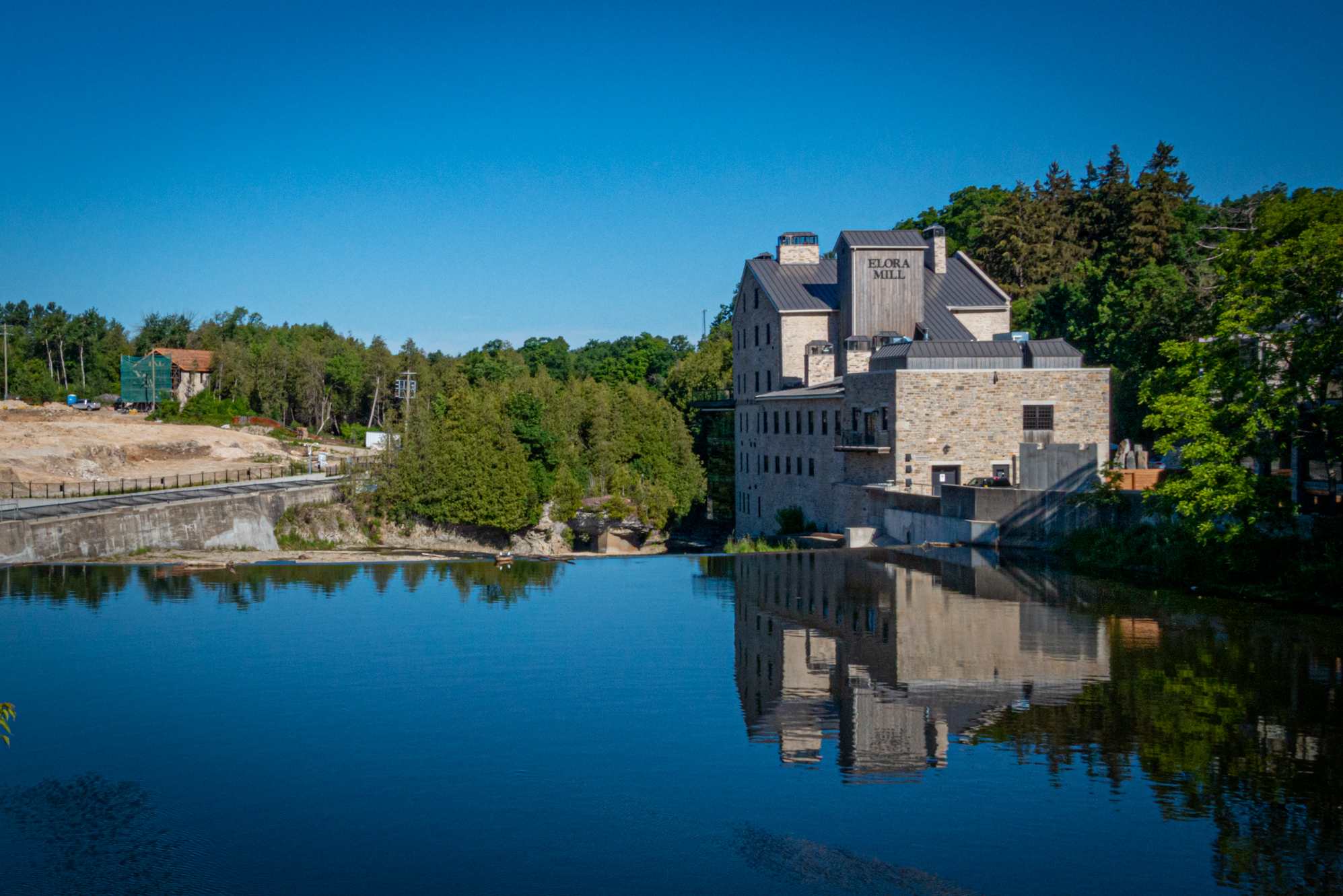 Elora’s historic mill, now a hotel and spa, in the glassy surface of the Grand River.

I bicycle on toward Elora, famous for its picturesque 19th-century limestone buildings, including the imposing Elora grist mill (built in 1832), which is now a high-end hotel and spa. The surrounding area has a rugged beauty, with lots of outdoor options, including hiking and water sports at the Elora Gorge and the Elora Quarry Conservation Area (entrance fees apply).

With 51 kilometres covered and another 55 kilometres ahead of me (the return trip), I sense my orienting reflex has been flexed, and I’m feeling more vital and excited about life.

I take in one last view of the dancing reflection of Elora’s historic buildings in the black glassy surface of the Grand River, and begin the long ride back to Cataract along those glorious car-free rail trails. ♦

In the Light & On The Trail: Jill Wheatley Conquering the Mountains of her Mind

Land of the Nunavimmiut: Nunavik, Quebec | an Outpost Adventure Report