I pride myself on travelling as lightly as possible, and like to believe that years of wandering have honed those skills to such an art that I fear one day I might shrink-wrap myself!

So skilled am I in minimalist packing that my wife and I were once victims of a scornful passenger in an airport check-in queue. Driven to distraction by the small luggage we were effortlessly manoeuvring, in stark contrast to her own wheeled matching armoires, her bitterness exploded forth.

“Do you only take bikinis with you?” she scoffed nastily, while in my mind I was surreptitiously smearing nitroglycerine heart medication all over her carryon just to give her a fun time at the airport’s security check. 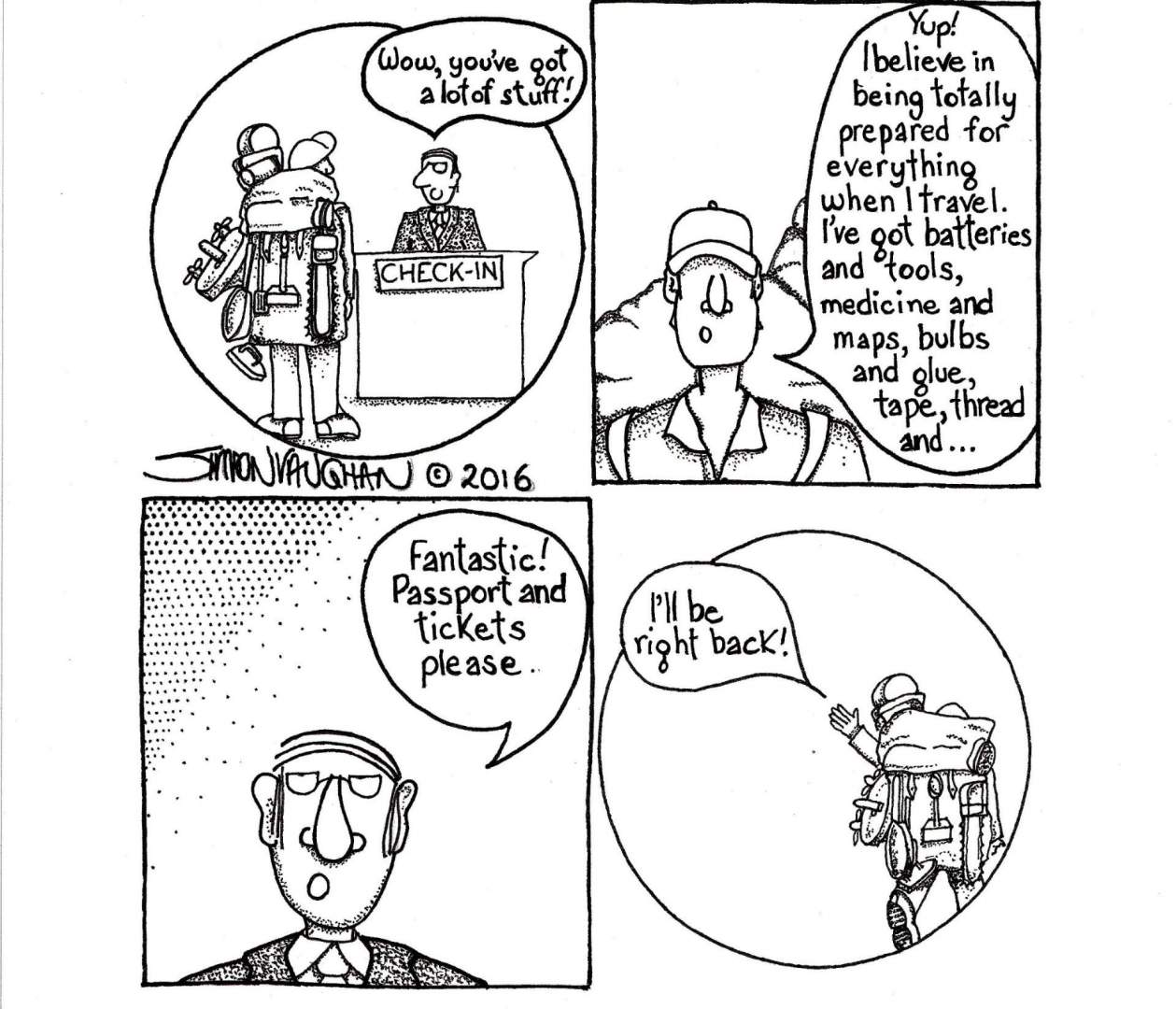 My wife and I smiled meekly, nodded and hurried forward to the counter before the next eruption.

My desire for bare baggage is sometimes challenged by my Boy Scout drive to Always Be Prepared. Years of road-trip mishaps have ensured that I always strive to be equipped for any eventuality. From spare laces for my hiking boots, to spare bulbs for my flashlight. From a thin nylon rope and a handful of wooden pegs to a spool of thread and several needles.

Then there’s gear and treatments for rain, tropical heat, cold nights, hot days, diarrhoea and dehydration and mossie bites, and a bottle of antiseptic that’s good for sterilizing wounds, and in dire, last resort, strep-throat emergencies, even gargling!

I’ve MacGyvered my way out of all sorts of predicaments on all seven continents in both tents and hotel rooms, using a little lateral thinking and the odds and ends sequestered in my special zippered bag.

There’s a great feeling that comes with being self-sufficient and able to cope with anything the travel gods throw your way. With a flashlight hanging from one side of my belt and a water bottle on the other, Band-Aids in a back pocket, utility tool in the front and gloves within easy reach, I know I am utterly invincible and ready to take on the world.

A few years ago, Outpost sent me to Nunavut for a couple of weeks on an opXpedition. We were to spend some time in Iqaluit, hike Auyuittuq National Park and explore Pangnirtung. Given the variety of terrain, climates and activities, my detailed planning and careful packing went into overdrive, and from sunblock to After-bite, thermal underwear to sunglasses, hiking poles to water-shoes, I knew I had everything expertly covered.

As our plane landed at Cape Dorset, Dan (my opXpedition partner) and I were greeted by Kristiina Alariaq, who was to be our host.

“We’re going to spend a few days on the land,” Kristiina explained, as we swung our backpacks into her pickup truck. “We weren’t going to leave until tomorrow, but the weather forecast is better today so we’ll go straight away.”

Dan and I nodded eagerly. Not only was the opportunity to spend time camping with a local family one of the trip’s highlights, but it was likely also my last opportunity to catch a glimpse of a polar bear. Being a huge wildlife buff, the prospect of such a sighting had been one of the most exciting aspects of the whole expedition.

We headed down to the shoreline and began loading the gear and supplies into the family’s boat. As we transferred everything I counted not one, not two, but three rifles and several boxes of ammunition. My heart skipped a beat. Could this be for protection from polar bears?!

With Cape Dorset dissolving in light fog behind us, I asked Kristiina and her husband Timmun if they saw many polar bears around their land.

“We’ll save the polar bear stories until we’re at the cabin,” she replied cryptically.

We spent the next couple of hours weaving through patches of fog, skirting half-submerged rocks and keeping an eye out for seals and whales. (How cool does that sound?) Finally, we turned in to a bay. Timmun slowly taxied forward, carefully scanning the land.

“Bears,” he explained, without adjusting his line of sight. “I’m checking for polar bears. You wait in the boat while I go in and make sure there are none around.”

With that, he climbed down into a motorized dinghy, a rifle in his arms and headed for shore. He clambered onto a sloping rock and stood on top of the nearest boulder, all the while surveying everything around him. With his rifle at the ready, he set off for the family hut, which he circled warily before signalling that it was safe for us to follow.

The Alariaqs have two small cabins on their land. What they lacked in electricity and running water, they more than made up for with wonderful hospitality. The family’s one-room cabin had a small kitchen area with a propane burner, a table used for food preparation and eating, two sets of bunk beds and a radio with a very high antenna mast to keep an ear on local weather and call for help in an emergency.

There were also large Plexiglas windows which let in plenty of long, watery Arctic light and provided panoramic views of Hudson Strait.

“See the scratches on the glass?” Kristiina asked as she ladled a fine lunch of caribou stew she’d brought from home. “Polar bears stand on their hind legs and look in the windows. Those marks are from their claws. And see how that back window frame is slightly bent? That was where one bear tried to climb in before being shooed away.” 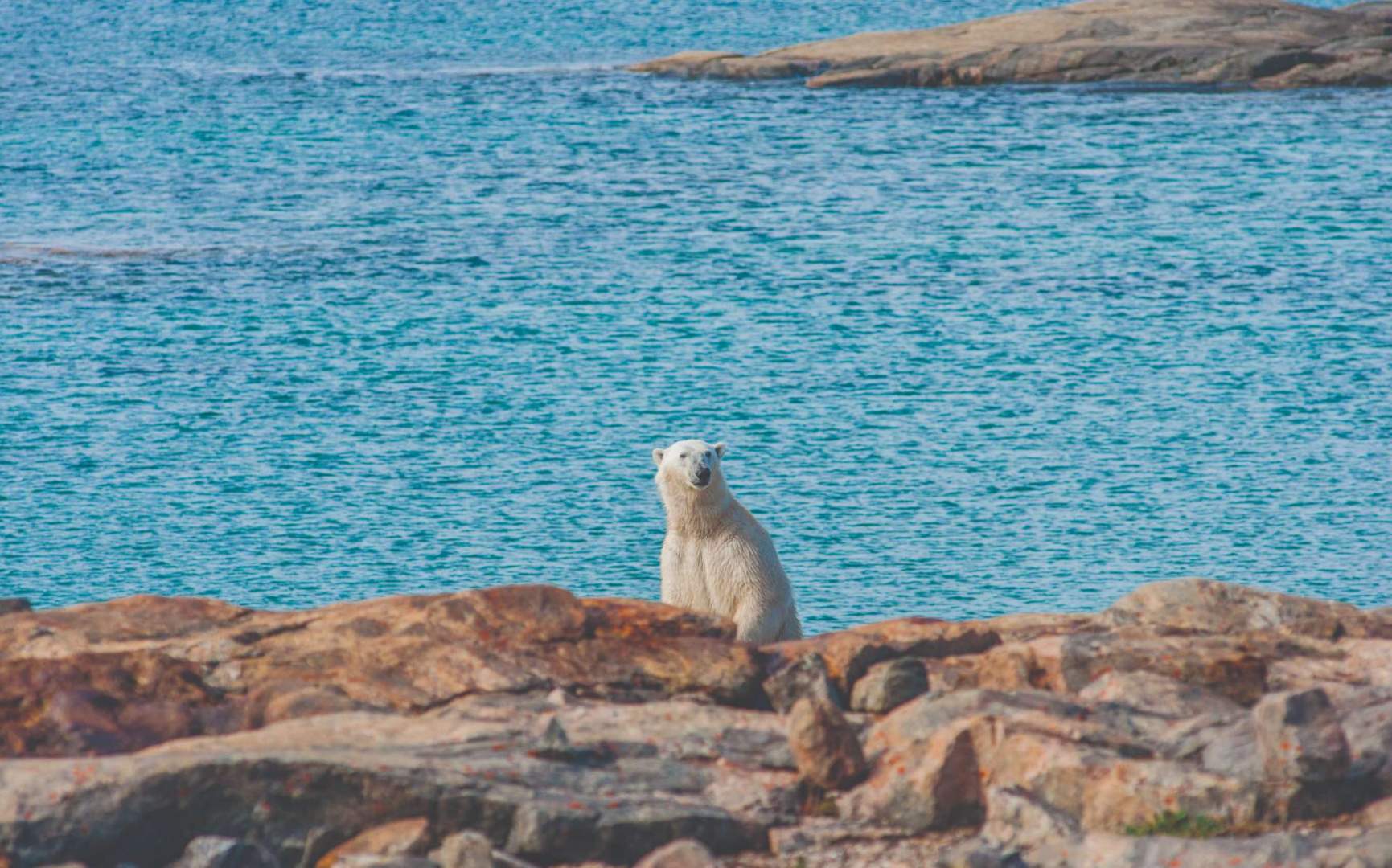 In Nunavut, this Polar Bear swam to shore and even landed, when he spotted Team Outpost on land! Who’s Viewing Who?

“We never go anywhere without our rifles,” Timmun explained, soberly. “Make sure you do the same.”

I had never handled a real rifle before. Sure, I’d had target practice with an air rifle, but never a real gun, and while I knew how they worked we agreed Dan would carry the rifle and I’d carry the camera.

Over the coming days we did as Timmun bade and whether wandering on our own close to camp or further afield with the family, we never went anywhere without the three rifles and our pockets stuffed with boxes of ammo. 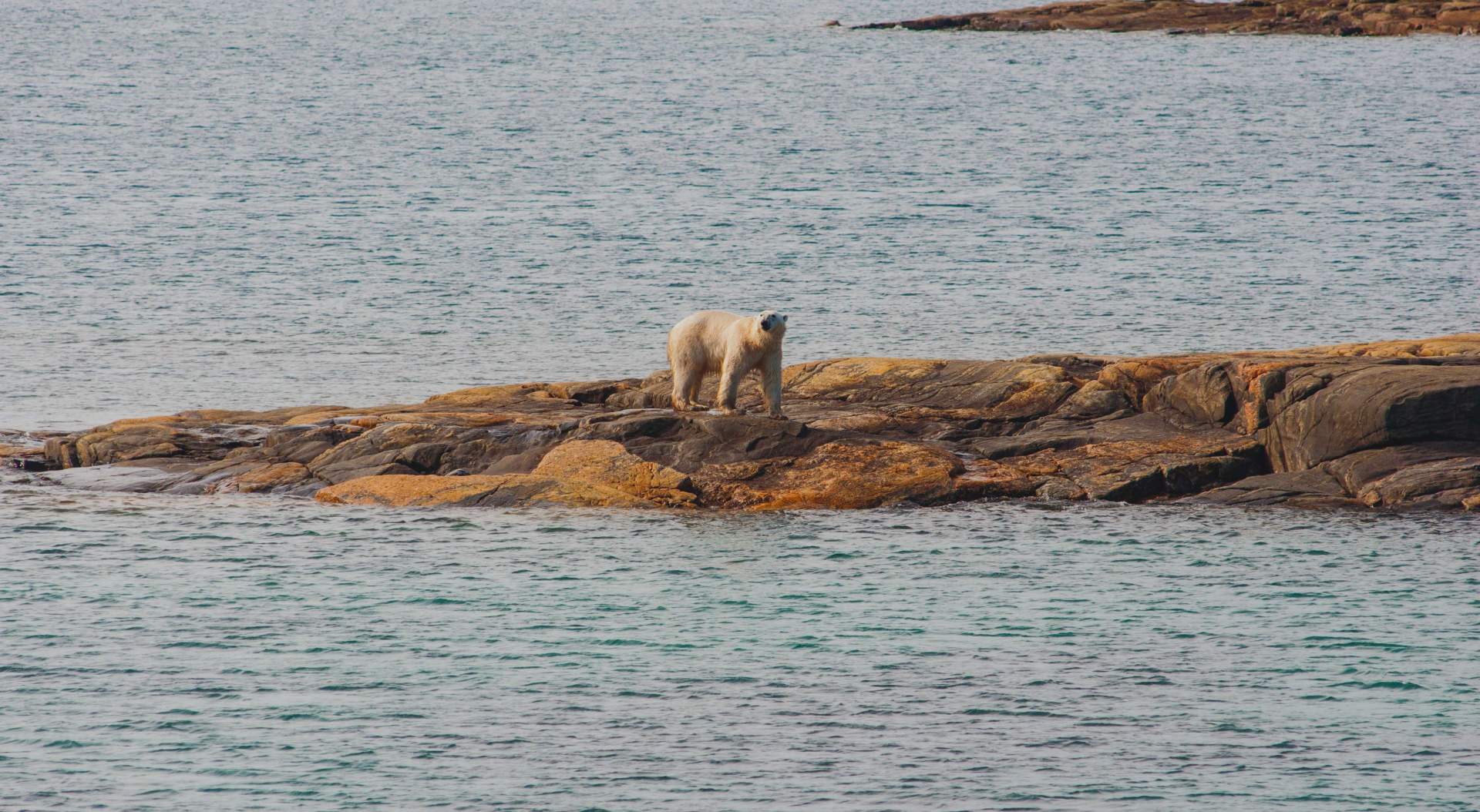 Here the same bear is hanging on the rocky outcrop, still gawking at Team Outpost on shore. So rude!

One evening after dinner, I said I was heading back to our hut early to do some writing. The tiny guest cabin was a few hundred metres away and contained a single bed and a propane hotplate.

I put on my fleece, pulled on my hat and slipped into my rain jacket. I checked that my flashlight was still on my belt and my utility tool still in its holster, then slipped on my light gloves.

As I zipped up my jacket, fastened my cuffs and made for the door, Timmun called up to me from the table.

“Don’t forget the rifle!” he admonished.

I nodded sheepishly and picked up the gun.

With the bushcraft I had mastered since arriving in Nunavut, the sixth sense for danger I’d quickly developed, my eyes methodically checking the way ahead, behind and around me and the weapon expertly held across my chest, I confidently trekked to the hut. Once inside, I placed the rifle within easy reach and settled down to my notebook.

Unlike the larger cabin with its thick Plexiglas, the second hut had only glass windows. Timmun had warned us that if a polar bear appeared we should shout and make noise. If one broke the glass and started to climb in, we should just shoot because there’d be no time for warning shots.

With the door firmly closed, my water bottle, hunting knife and flashlight beside me, my fleece folded as a pillow, my boots on standby at the foot of my sleeping bag and the rifle propped close by against the wall, I felt well prepared and supremely confident that my extensive Arctic skills and superlative organizational abilities would ensure I could take care of myself, whatever might come visiting.

As I lay on the cabin floor writing my notes, the long day’s fresh air, the trekking and a stomach full of Arctic char took their toll and I fell fast asleep, unmolested even by Dan’s later return.

The next morning, we were awake early.

“No polar bears on your way home last night, Dan?” I asked as the warm sunlight filled the hut.

“Nope. You arrived back safely?” he asked in return.

“Good job you didn’t encounter a bear though,” he said knowingly, as he headed to the propane element to make himself a mug of coffee.

“You took the rifle but forgot the bullets. They were still in my pocket. I’m not sure you could have done much with an unloaded rifle if a 1,000-pound polar bear had tried to get in through the window.”

And with that, I silently placed my combination thermometre-compass-altimeter back in my special zippered bag.

Drifting Through the Cold War Haze of Lviv, Ukraine