Excess Baggage | Postcards From Beyond the Edge

Whereby our super-senior correspondent waxes poetic on the super sounds of silence!

I once received a postcard from Hell. Not a Halloween virtual card or a gag e-card. Not some middle-of-the-night, Ouija-board turning, thumping-under-the-bed, head-spinning, up-chucking, ornament-moving sort of communication.

Nope, this was a genuine, honest-to-goodness postmarked postcard that had travelled through at least two international postal systems on its wicked way to my letterbox.

The Hell from whence the satanic verse came was Hell, Norway, a small village not far from Trondheim. The postcard showed the railway station with the sign “Hell” on the platform and an eerie purple and orange sky beyond, and it had been sent to me by a particularly thoughtful co-worker who just knew that I would appreciate a message straight from Hell (even if she hadn’t thought to sign it “B.L. Zeebub”). My Hell’s angel was so correct that I pinned the card to the wall above my desk, where it stayed for several years never failing to devilishly gain comment from visitors and other co-workers.

Postcards used to be the done thing. As much a part of travel as those fancy labels that you see stuck to people’s luggage in old films and novelty posters, no one travelled without sending postcards home to friends and loved ones.

In my early travels I never failed to send a bunch to my parents, relatives and perhaps a friend or two who I felt would appreciate the destination, the photo or just the thought. I was always worried about it being interpreted as bragging, but my intentions were always honest and honourable, and most of my friends are forthright enough that if they had misinterpreted my gesture they would have told me to go to a small town in Norway.

I sent postcards from dozens of countries. Some were mailed in big cities, others in tiny dust-blown towns, and all eventually reached their destinations—except those from Cuba, which never turned up at all. I suspect either the stamps were steamed off and resold, or my wistful holiday missives now adorn someone’s wall in that country. Some postcards travelled the world at seemingly lightning speed, arriving home within days, while others were the mail-equivalent of a message in a bottle and arrived home months after I did.

The postcards weren’t just souvenirs; in many cases, on long overland travels, they were my only communication with home. In the days prior to cellphones and emails the best my parents could hope for during a seven- or eight-week journey was a phone call to say I’d arrived at my destination, then a few postcards before I rang again to say I was at the airport, homeward-bound. 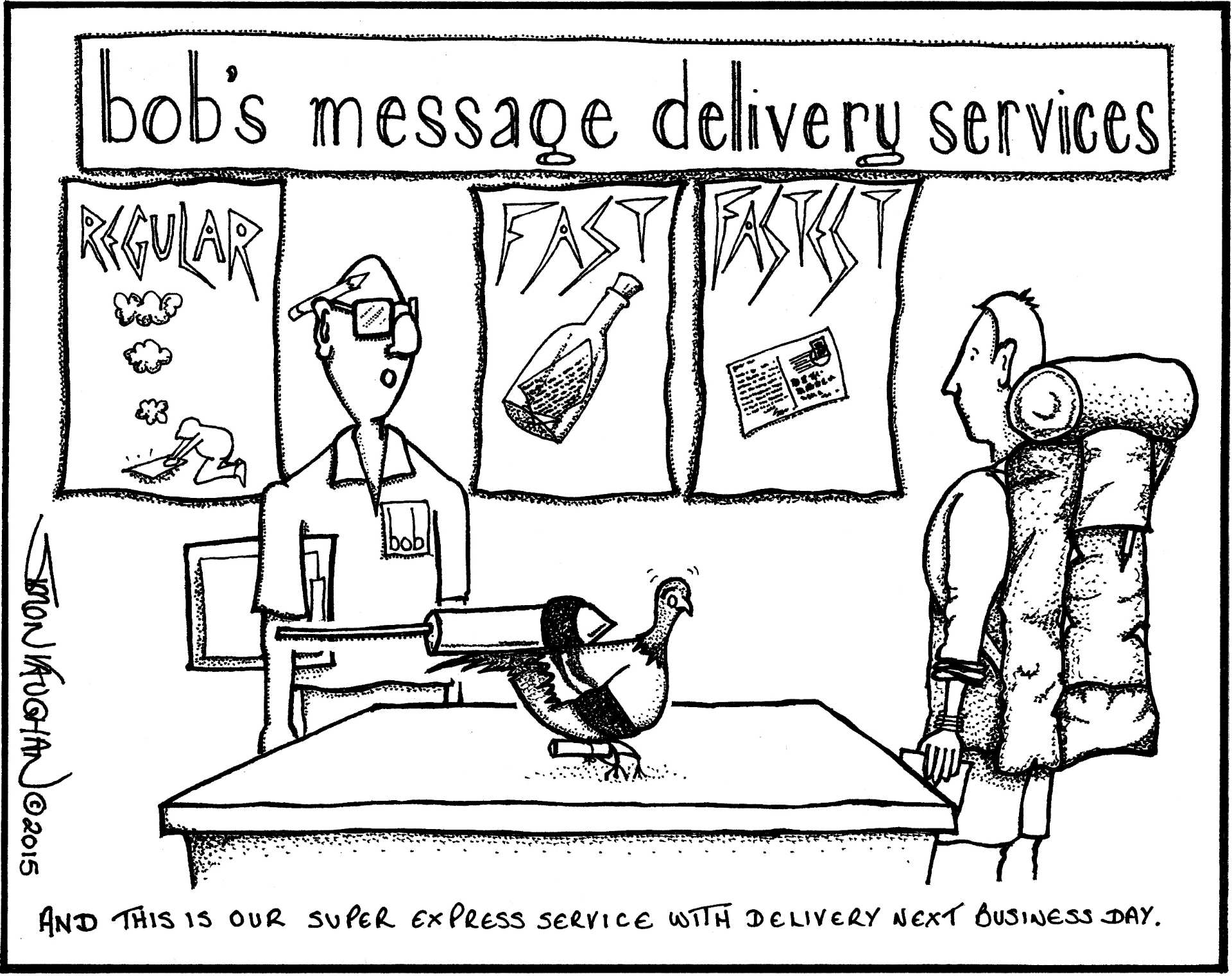 So those postcards were important to let my parents know that I hadn’t been eaten by lions, kidnapped by terrorists or stranded on a desert island. Of course, had I been abducted, my kidnappers would have had at least a four-to-five week head start on any search, given how long an absence of postcards would have been tolerated before the alarm was raised.

Alas, I suspect that postcard sales are rather poor these days, although some are likely still sent and stuck with magnets to people’s fridges until steam causes them to curl up, slip to the floor and slide to oblivion under the appliance. I would guess that selfies on Facebook have pretty much eclipsed them in general though, and like cheques, many people likely wouldn’t even know how to write on one today.

At risk of sounding like my father by saying “When I was young,” I’d have to say that when I was young(er) and travelling the world, being on the other side of this planet really was like being on another planet.

There might be the occasional call home from a payphone if I could find a phone that worked and someone selling phone cards, but it was usually just postcards, and one fax I sent from Uganda that a clerk fed in backwards so all my parents received was a blank piece of paper. (They assumed that was proof of life and contentedly moved on with their day-to-day existence. To the present I remain grateful that it wasn’t a faxed ransom note with a tight deadline or their next communication from me might have been a box containing one of my ears!)

A good friend of mine told me that when her brother was backpacking around East Africa he once went for a particularly long time without contacting his family. Nazreen’s alarmed mother took matters into her own hands, peppering all the newspapers anywhere near his possible route with advertisements that asked anyone who saw him to tell him to phone home.

It didn’t take long for the message to catch up to him, and I suspect he still awakes in the middle of the night in a cold sweat, remembering his 15-minutes of African fame.

I must confess, however, that for all the inconvenience of being incommunicado there was something wonderfully liberating about being beyond any straightforward line of communication.

Sure, if there’d been a dire emergency there were generally ways my parents could likely have contacted me within three or four days, but that would have been for extreme circumstances only. The rest of the time I was off-limits, and that helped me to embrace my brave new worlds.

On long travels, I found that it didn’t take me long to really love that sense of isolation and let myself dissolve into my surroundings and slower pace of life. Despite being a news junky, I would happily lose my desire to know what was going on in the world. News would arrive in bite-sized rumours usually from other travellers, sometimes accurately, often not. When I felt I really needed to know what was going on, I’d pick up a week-old weekly newspaper from a local vendor and eagerly devour every word from front to back before re-excommunicating myself.

Being cut off from home and my normal existence was as enthralling and rewarding as the scenery, new cultures and wonderful people I was meeting, and I threw myself into it totally and completely, leaving my own world well behind.

On one of my longest travels, my wanderings took me to Victoria Falls in southern Africa, where I stayed at the municipal campsite in the dead centre of the nearby town. It was not a particularly salubrious site, but it was shaded by trees and within easy walking distance of everything, including the legendary falls themselves.

The town was not only an adventure capital that offered everything from world-class rafting to unrivalled bungee jumping, but it also had cold drinks, a cool bar with a live band wonderfully named “Dr. Livingstone and the Presumers,” and spots where I could easily and reliably phone home. After weeks on the road it was heaven-sent, and having a week there to recharge my batteries was a great experience.

Having spent several weeks travelling through Zimbabwe, including one on foot that was deep in the bush, I felt Africa coursing through my blood.

I had Kalahari sand permanently wedged between my toes, a deep, brown African tan and a more leisurely gait. I’d come to love biltong—the cape buffalo beef jerky that was sold by the side of the road—and sadza, a cornmeal staple, and got genuinely excited by the mouthwatering sight of a scarred recycled bottle of orange Fanta, even if it was rarely refrigerated. I was moving at a more considered pace and felt I had finally left my own world behind and acclimatized nicely.

Sitting at the campsite one afternoon writing on some postcards, I made a comment to one of the camp staff about the constant noise of traffic from the motorway beyond the trees. Although Vic Falls is world-famous and attracts thousands of visitors each year, I was surprised by just how much traffic there was humming through the town.

He looked at me quizzically.

“There is no traffic,” he said. “We don’t have enough cars here for there to be traffic.”

It was only then that I realized my isolation hadn’t sensitized me to the slower pace of the developing world as much as I had liked to think. I hadn’t flushed the bustle, rush hours and big cities of home from my system at all—in fact far from it. The heavy traffic I had been listening to night and day for the previous three days hadn’t been traffic at all. The constant background noise hadn’t even been manmade.

“That noise is Mosi-oa-Tunya. It is the waterfall,” the camp staffer added, before getting up to chase away a stray baboon from someone’s tent and leaving me to realize that even after weeks on the road, cut off from modern conveniences and communication, immersed in local foods and new culture, and living just a slower pace of life, you could take the boy out of the big city but you couldn’t take the big city out of the boy!