Llama Trekking in the Highlands of Pariaqaqa, Peru | In The Land of Ayni: Part 3

In the last installment of his story “In The Land of Ayni,” explorer Jeff Fuchs heads to the highlands of Tanta, Peru, and finds the spirit of the mountain gods everywhere.

Long necks bobbling like swans on the grasslands and the chiming of bells—our llama caravan ahead eats up swaths of dry terra and bounces over the wide land. Their ambling is the only thing that stirs up the landscape. The llamas’ necks crane for whatever succulents they can find while they move.

Our conductor of all llama activity, Diego the llama herder, follows along like the mountain man he is: straining, agile, sun-blasted. His whistles scream through the air, urging on the belligerent munchers. 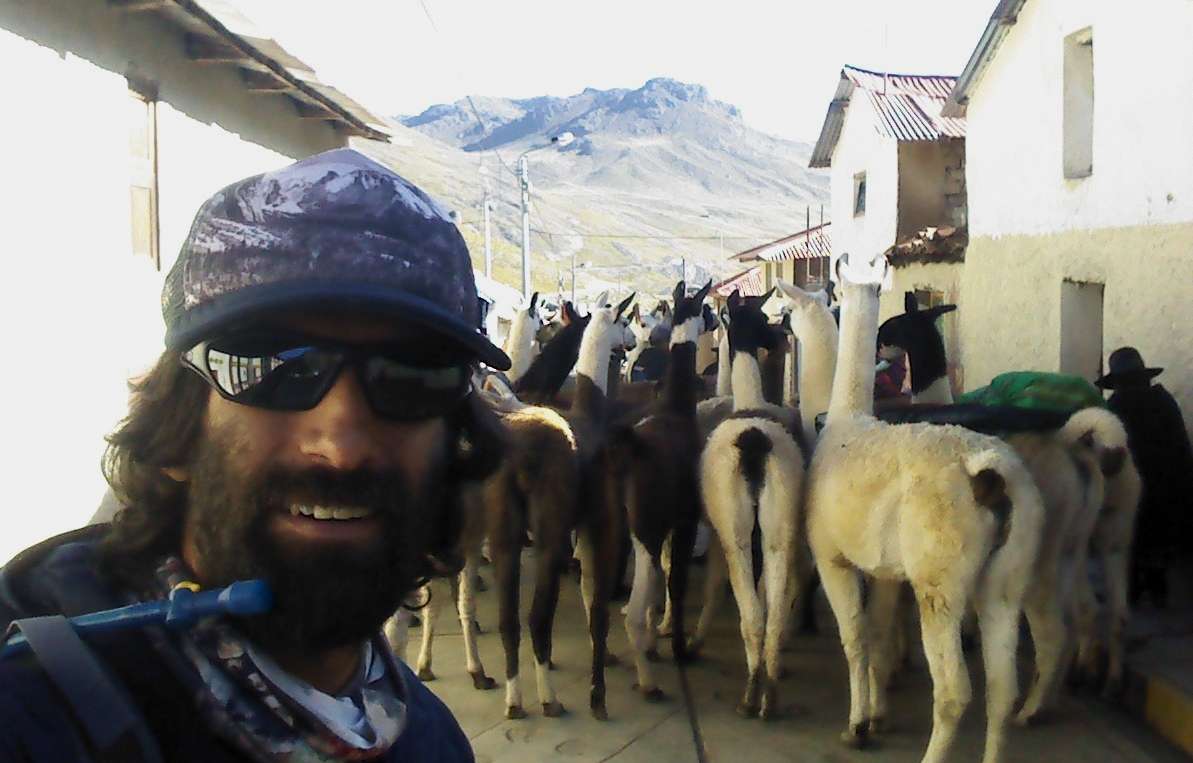 Part of our team, local guide and fixer Rodrigo, helping procure the llamas for our trek.

The creatures, known for their soft toes and usable warm wool, existed here long before anything with hoofs showed up. Like the alpaca, vicuña and guanaco, llamas are of the camel family and native to South America. But they are the only indigenous pack animal of the bunch.

With their soft rubbery lips and curling eyelashes they hint at some flamboyant genius, and virtually leave no tracks, with their brilliant malleable “footwear.” An important point actually, as much of the great road’s length trodden by mule disintegrated with the intrusion of hooves that came with the Spanish—who imported mules and horses. 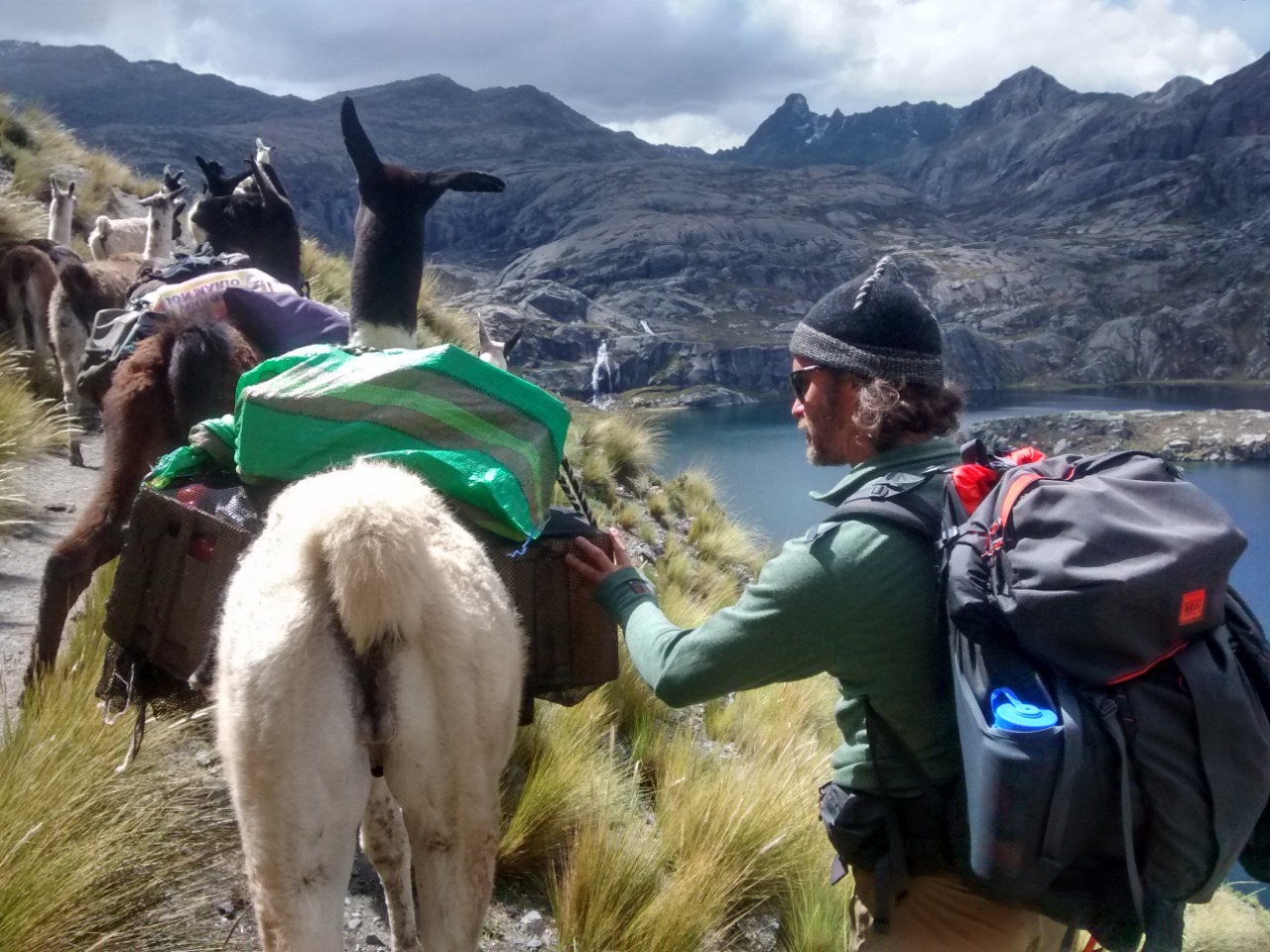 Jeff with securing a pack on the llama, on a ridge in the Pariaqaqa highlands of Tanta, Peru. 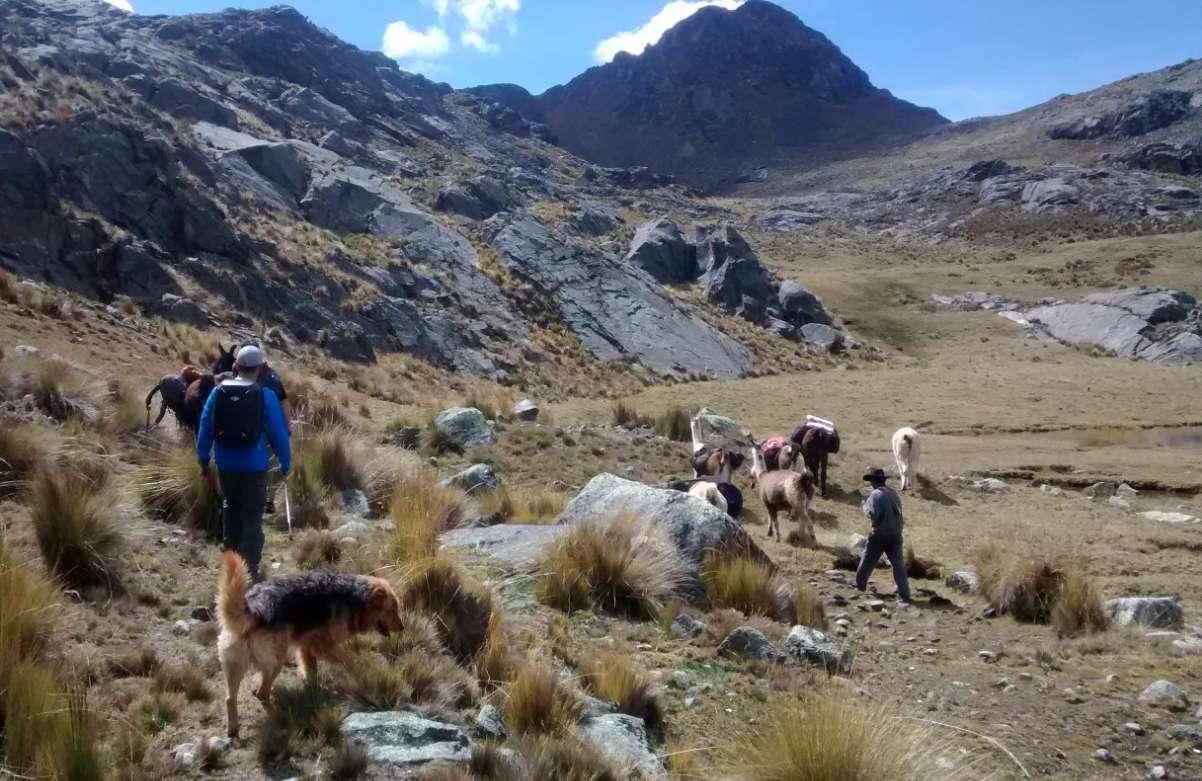 Trekking across the rugged Inca landscapes of Peru.

In contrast, the almost moccasin-like treading of the llamas did no damage, even over centuries. It is almost as if they too, seem privy to the idea of ayni, and reciprocity. As if they physically evolved just to leave little mark on the landscape, passing along its surfaces so gently.

As the animals crane and chew upon greens as we move, so too, do I. Coca has remained more than a passing fancy in my time here in Peru. It has become startlingly regular for me, with almost a ritualistic scheduling of its taking: in the morning with tea, a before-lunch followed by an after-lunch dessert course of both coca and tea, and finally a good afternoon chew that would last an hour. 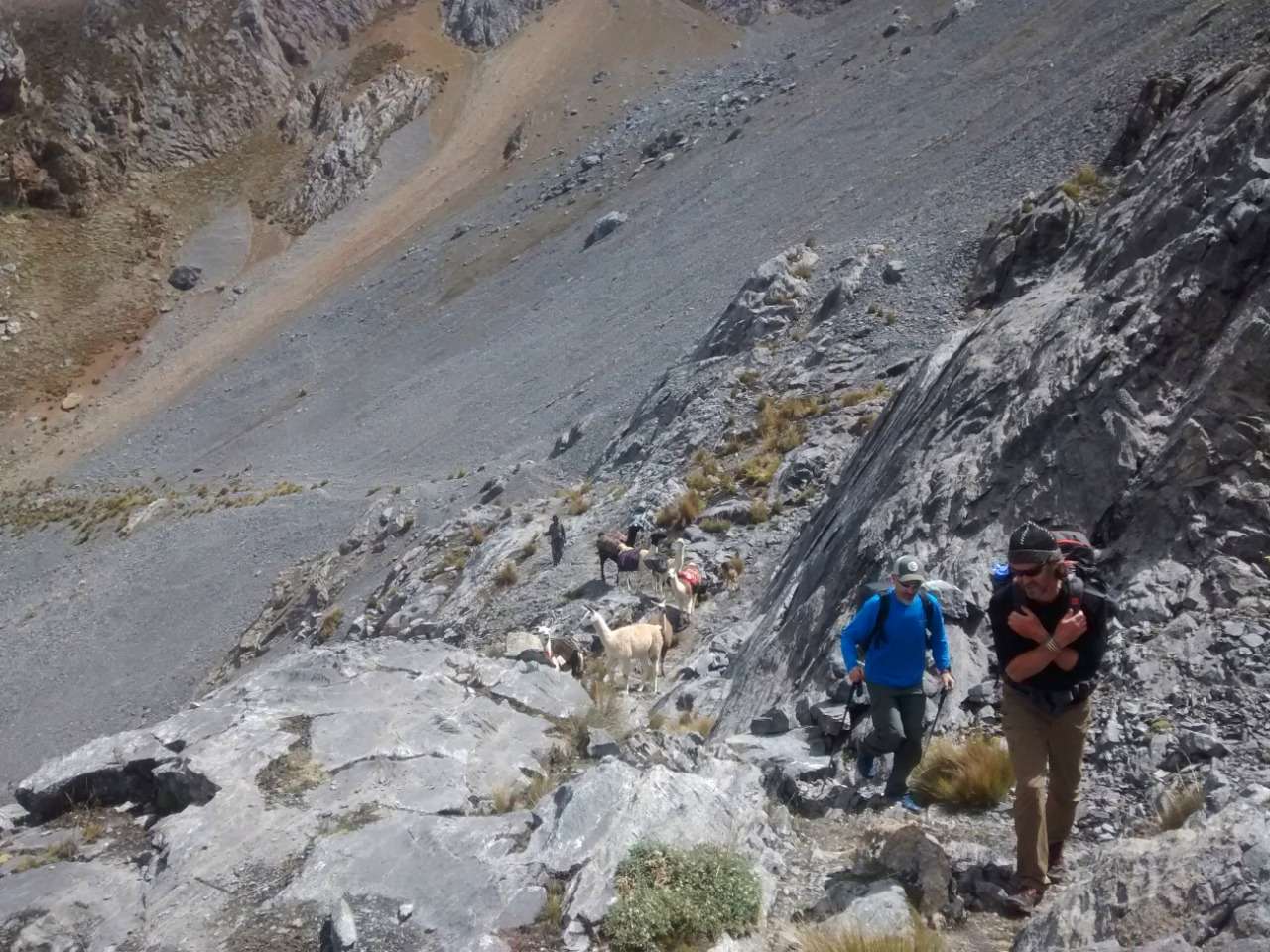 Jeff (front) and Domingo, one of our local guides and fixers, heading up a rugged Andean cliff in the Tanta district, near the region of Junín, Peru.

We have gone into the very cool highlands somewhere that lie in the vast swath of open land well beyond and east of the city of Lima—it is rugged, rough, rocky Andean topography, and we are here to llama-trek portions of the great Qhapaq Ñan. Though names scarcely explain a place, we are in the Tanta District in the province of Yauyos, travelling on an east-west transversal route of the road that moved over high Andean puna to link with the coast.

This transversal tributary accessed other worlds of people and products in times past, including fish from the Pacific. Saltwater fish was ushered along pathways here to improbable 15,000-foot-high homesteads after just a few brief days of travel along the route. 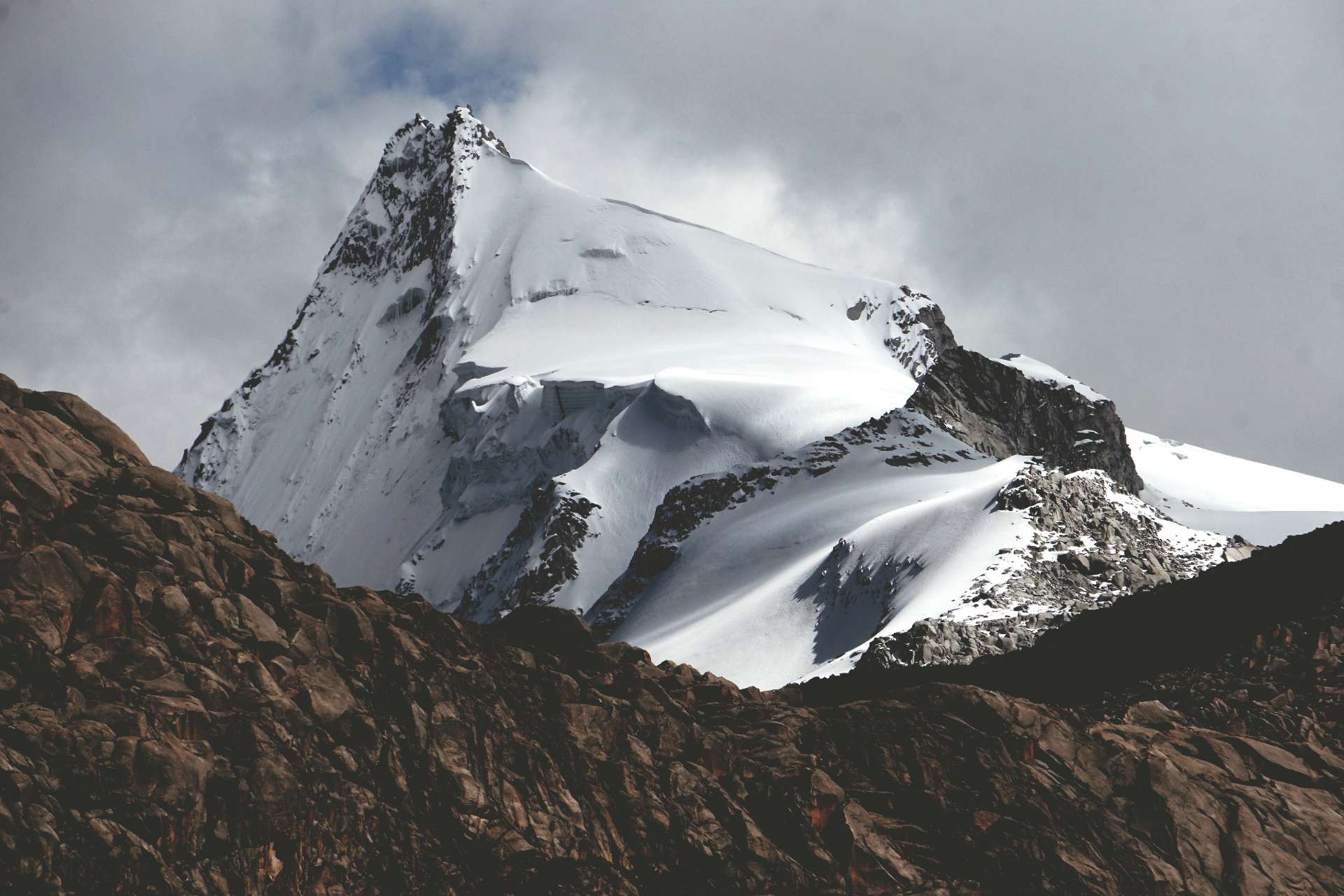 Mount Pariaqaqa in the Andean highlands of Tanta, Peru.

Mountains and ridge-lines bisect every sight-line we have, and we are now far above 4,000 metres of elevation. Our team has altered, with Jackie and Wilfredo having departed and Domingo taking the lead, thriving in this high wonderland. Alex remains, losing none of his entertainment value, nor his strength.

David continues to grow into his great mountain self. Another ultra-runner, Rodrigo, has joined us from Lima—a Buddhist and friend of Domingo’s, he sports a beard that urban hipsters would put a mortgage on to grow.

As much as this great and eternal route through the sky is a truly Andean bit of history, the particularity of the Incas find their way into the tale of interwoven tangled pathways because of, perhaps, their most important skill: the ability to amalgamate disparate cultures into a cohesive system and philosophy. Foods, cultures, strategies and wisdom were skimmed from vanquished and neighbouring cultures (and many that came before) and fused into a living philosophy of ruling and evolution. 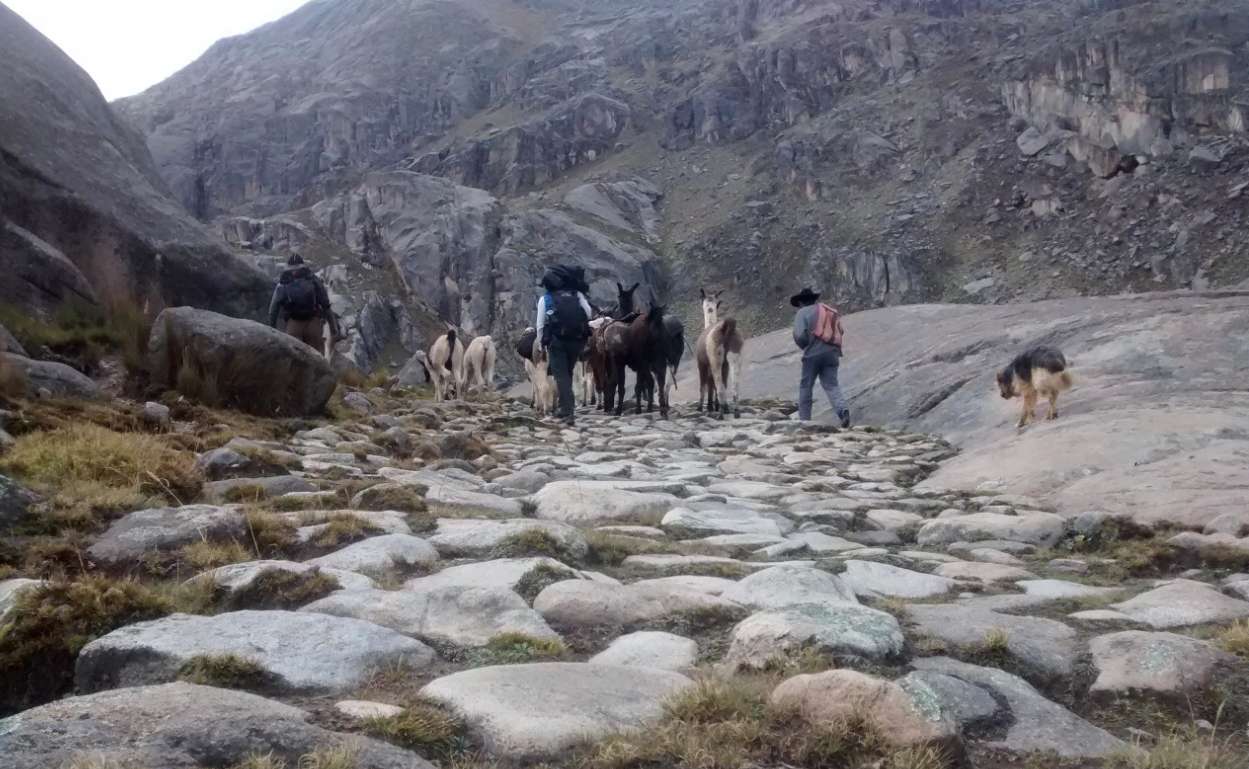 The Andean highlands are marked by remnants of the Great Inca Road Network: once a vast system of interconnected roads, trails and paths that allowed the Inca Empire to thrive.

Having little in the way of text—the Incas had no written language; therefore, no written records or archives survive—knowledge was fluid, organic, robust, alive. There was that which mattered, and that which did not, though the empire itself sprung to flame and ebbed into oblivion in less than a century.

A Sherpa once laid out the basics of his mountain world to me. “As long as there is a visible sky, there is no need to worry.”

The Andes that surround us provide a similar inevitability. They offer up sky in swaths of intimacy like few other spaces on the planet. And, as I learn in Cusco from architect/astronomer Andres Adasme, who studies connections between the sky, sun and stars to Inca and ancient Andean infrastructure, it was the sky itself that provided the mirror for much of the Andean world’s human realization.

Out here in these rugged highlands, in a space defined by sky, you feel its power immensely.

Our little fire finally burbles with orange light. Above us, the mountain version of a still and cold dusk is arriving in a quiet wave. Tucked into his beard and layers Rodrigo points to a still-lit shard of triangular snow that sits on the horizon. Alex, with a randomness to be irreverent, says simply: “She is just waiting for us to look at her.” 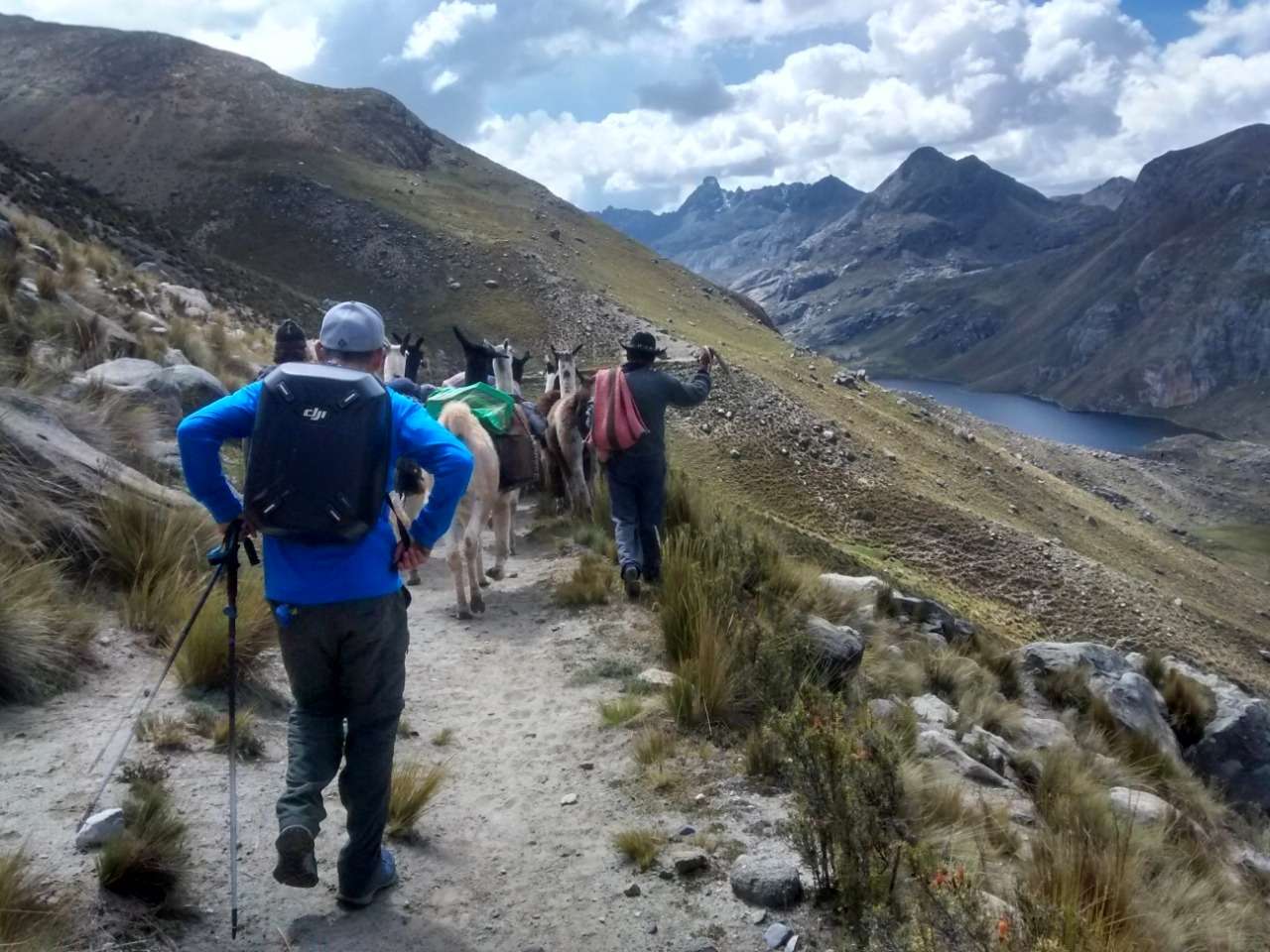 Diego, in black hat to the right, leads the trek along a ridge, with a wide swath of the Tanta highlands in view.

I contemplate grabbing some coca to chew at this auspicious occasion, but decide the moment needs nothing. Mountains have long awakened a kind of reverence in me partly because they are so entirely present while remaining tantalizingly inaccessible. Beneath them I feel the thread of a sense that tells me all is well, and all can be repaired.

They remind me vividly too, of being taken by my energy-ball of a Hungarian grandmother into the snow and mountains of Switzerland and pushed out into it all to simply be amid it. She knew their worth intuitively, and wanted it to sink in. 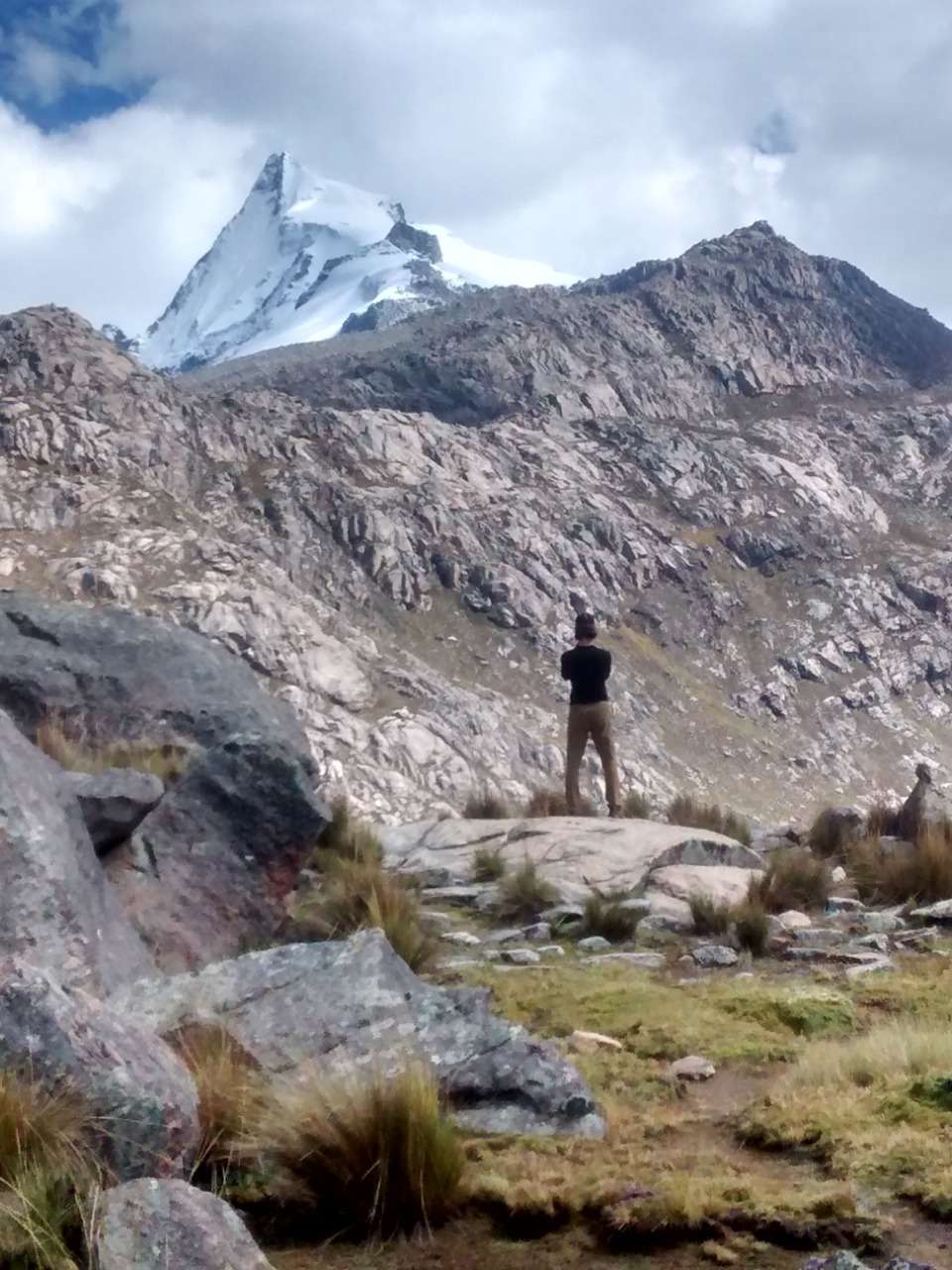 Jeff paying homage (with coca) to the “apu” (mountain deity) of Pariaqaqa.

That shard of ice and snow above us that is feeling the last bit of this day’s sun is Pariaqaqa, a sacred mountain to the Incas and to those animists before. Not only a mountain deity—an apu—and therefore sacred, but also an oracle of renown. So revered was it in ancient times that the “Sapa Inca,” the Incan king or emperor, would dress as a commoner and go on pilgrimages to address and bow to the snowcapped titan. 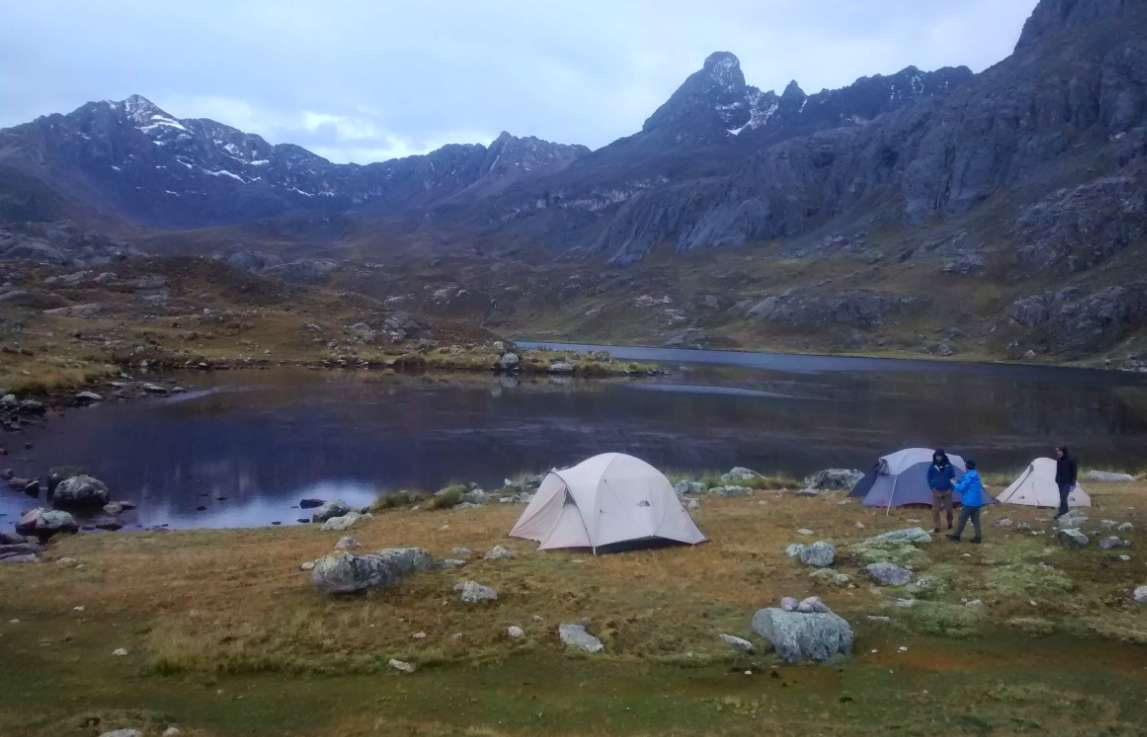 Stopping for the night: setting up our tents by the river. 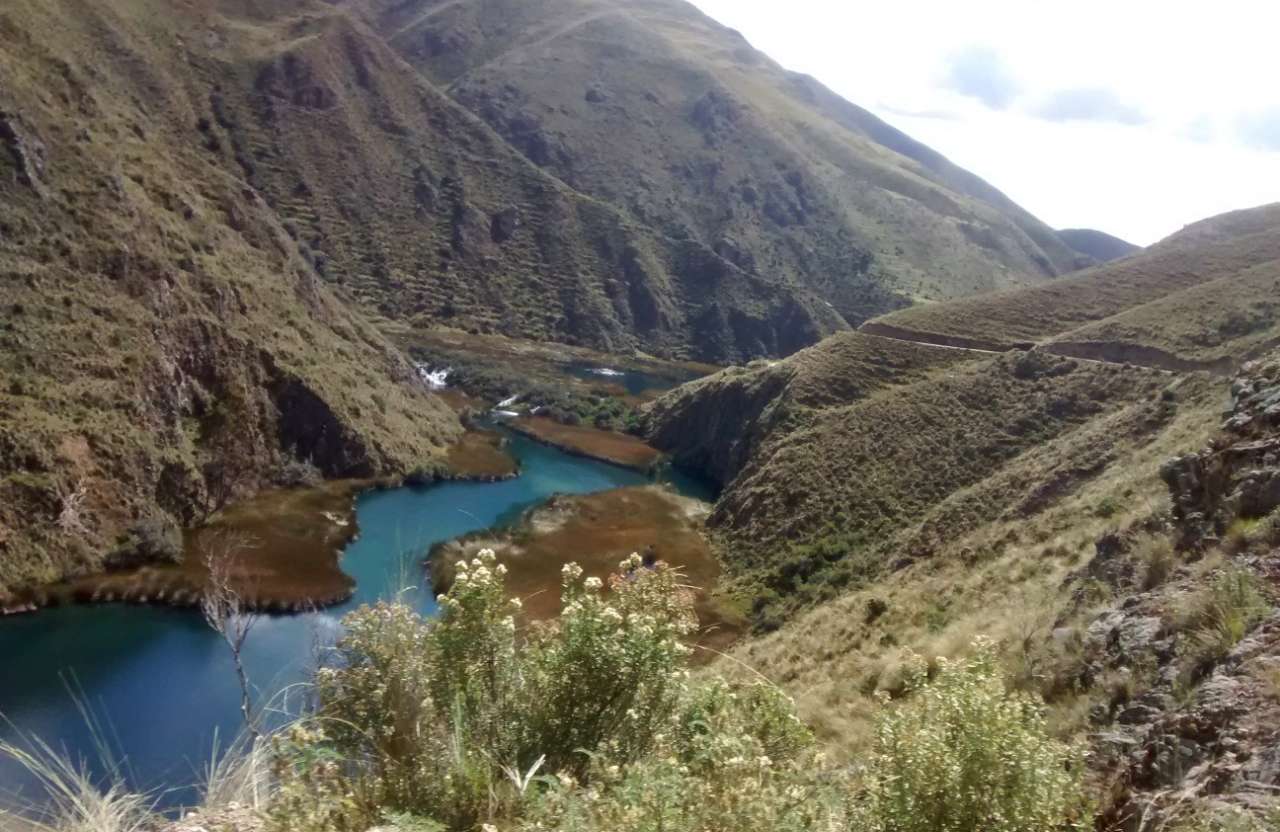 Andean glacier rivers cut the land and flow to the mighty Amazon river and rainforest.

Somewhere out there, just beyond us, one of our llamas belts out some cranky notes as it grazes. Rodrigo reminds us we are in puma country, and that llamas and vicunas are their prized treats. Alex chimes in that he is also “a hunter of the high mountains.”

Much in the world is about compromise, I have often been told—here in the Andean world (and travelling with our wonderful Alex), that has been a constant. Pachamama, “Mother of the Earth” but also the fertility goddess, was offered llama sacrifices in the past as a tribute; I am told the lungs, in particular, were extracted. So much in the world of the Andes is, and was, about duality, and so the mountains and regions had as many female deities as they had male. Nature in such spheres is the conscience, the panacea, the great equalizer for its genders.

The shard of ice and snow fades as the darker shades take over. We shuffle in closer to the fire as Diego, the llama herder, begins to tell tales. He says it is easier to tell a story in the dark where he is less self-conscious, being unseen. I reach into a pocket to a little pouch and extract some dry coca leaves, then jam them in between my bottom gums and cheek.

But not before a little offering in the dark to Pachamama, and to the now-unseen oracle that is Pariaqaqa. ♦

A Jungle Trek to El Mirador, the Ancient Lost City of the Maya