Fast Travel vs. Slow Travel: Which is Better?

When international backpacking first emerged in the 1970s, it was vastly different than it is now.  The lack of touristic infrastructure resulted in many travellers sleeping on the porches of bemused locals, waiting weeks for freight vessels to ferry them across waters, and learning how to say “No, thank you, I don’t want any partially-developed duck fetus” in Tagalog (or the regional equivalent). Travellers moved at a slower pace and were more immersed in their host culture.

Currently, many economies depend on the influx of young tourists.

Budget travel has therefore become extremely accessible; backpackers are catered to regarding accommodation, transportation and cuisine. Many hostels boast similar characteristics irrespective of where they are located—brightly coloured décor and Bob Marley music are as ubiquitous in Amsterdam as they are in Oaxaca.

Likewise, coach buses predominately aimed at tourists follow the backpacker trail in South America and Southeast Asia, and nearly every backpacker neighbourhood has an Irish pub as well as a trendy café serving coffee and pizza. 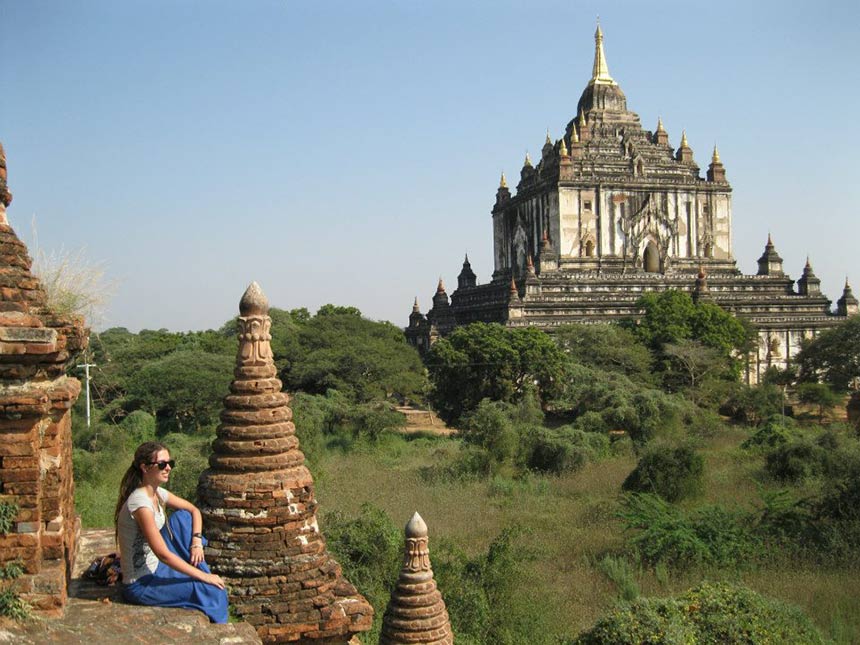 This has led to a duality in countries that boast a high concentration of backpackers—what the locals engage with on a daily basis is extremely different from what travellers experience. Thailand is a prime example: if a backpacker were to visit only Khao San Road, Koh Phi Phi and Haad Rin in Koh Phangan during Full Moon week, then their impression of the country would be starkly different than that of most of its citizens.

This duality, in conjunction with the increasing popularity of travel-related top lists (e.g. top five haunted castles in which to see a ghost, top three romantic cities in which to fall in love, top seven sacred temples in which to achieve inner peace), has given rise to the contemporary notion of “doing” a region. “Doing” refers to the act of rushing from attraction to attraction in order to check off the highlights in as many countries or areas as possible. This is most prevalent with travellers in Europe, Southeast Asia and Latin America.

Utilizing touristic infrastructure by following the backpacker trail to “do” as many places as is feasible can be summarized as the modern phenomena of fast travel.

There are obvious benefits to this approach, like being able to sample a wide variety of cultural and natural wonders in a finite amount of time; indulging in familiar comforts (e.g. Bob Marley and pizza) in order to stave off homesickness; and not feeling as though you’ve overdosed on one specific place.

Yet fast travel also has its drawbacks. Adhering to the backpacker trail may result in fewer surprises as your experiences will be similar to those of everybody else (and match what is predicted in the guidebook). As previously mentioned, it filters your interaction with your surroundings and renders it distinctly unlike that of the locals.

Furthermore, going in with set expectations of what an area’s highlights are can occasionally blind you to nuances you would have discovered with an otherwise wholly open and non-anticipatory mind. The biggest hindrance to fast travel is that it robs you of the opportunity to fully immerse yourself in another culture and soak up the detail, atmosphere and understanding that are easily missed while on a whirlwind tour.

Contrarily, slow travel is more akin to how backpackers in the 1970s experienced the world.

It involves narrowing your focus to a precise place, seeking out smaller or off-the-touristic-radar sights and communities, and taking in what the area has to offer on a greater multitude of planes. Slow travel generally includes more interaction with locals as well as frequent instances wherein you are the only Westerner on the bus/in the market/in the village/etc.

The advantage to this mode of travel is obtaining a deeper comprehension and appreciation of the sociocultural, political, philosophical, historical and natural elements of your host nation. Meanwhile, the drawbacks include a sense of isolation, as you are consciously removing yourself from the backpacker trail; greater challenges when it comes to accommodation, transportation, cuisine and (typically) communication as a whole; and the notion that you are “missing out” by investing your time and energy into just one place.

Fast and slow travel are both enjoyable, stimulating and rewarding methodologies of backpacking.

When deciding which one to implement on your next adventure, it is crucial to consider what you want to get out of your trip, and what initially motivated you to select your destination(s). If you are going for an extended period of time, consider experimenting with both fast and slow travel to discover which is better suited to you.

– Read about where you are going ahead of time so that you understand the significance when you arrive.

– Read novels or watch movies that the country or region is famous for.

– Comb through your guidebook carefully and pursue undertakings that are listed as off the beaten path or that receive little written attention. For example: one of my most exhilarating experiences abroad was staying at a traditional Dayak longhouse in Borneo, and I did so based on a mere half-paragraph of information in my guidebook.

– Attempt to learn at least a few phrases in the local language. Numbers are helpful when bargaining.

– Consider hitchhiking or Couch Surfing to become acquainted with locals.

– Be open to whatever opportunities present themselves; be flexible.