Mission Migration: How Citizen Scientists are Counting the Sandpiper

As the tiny sandpiper takes its long journey south for the winter, ornithologists, conservationists and even citizen scientists are stopping to take note.

The warm summer winds along the British Columbia coast carry a message of fear in the minds of tiny sandpipers. The handful of exhausted western sandpipers that touched down on a mud beach on the Fraser River Delta in the southwestern part of the province had just arrived on a long flight out of Alaska.

They quickly began to probe the mud for tiny food particles that would fuel another long flight on their journey to the south. These birds were in a hurry and my presence was of little concern. Instead, their big worry was of the peregrine falcon—one of their chief predators.

Falcons are the stealth bombers of the bird world, appearing unexpectedly over marsh grass along the edge of the beach or from high above on a death spiral dive. The falcon is much more effective when it uses an element of surprise rather than a high-speed chase, and most sandpipers are caught while on the mud flats rather than in the air. 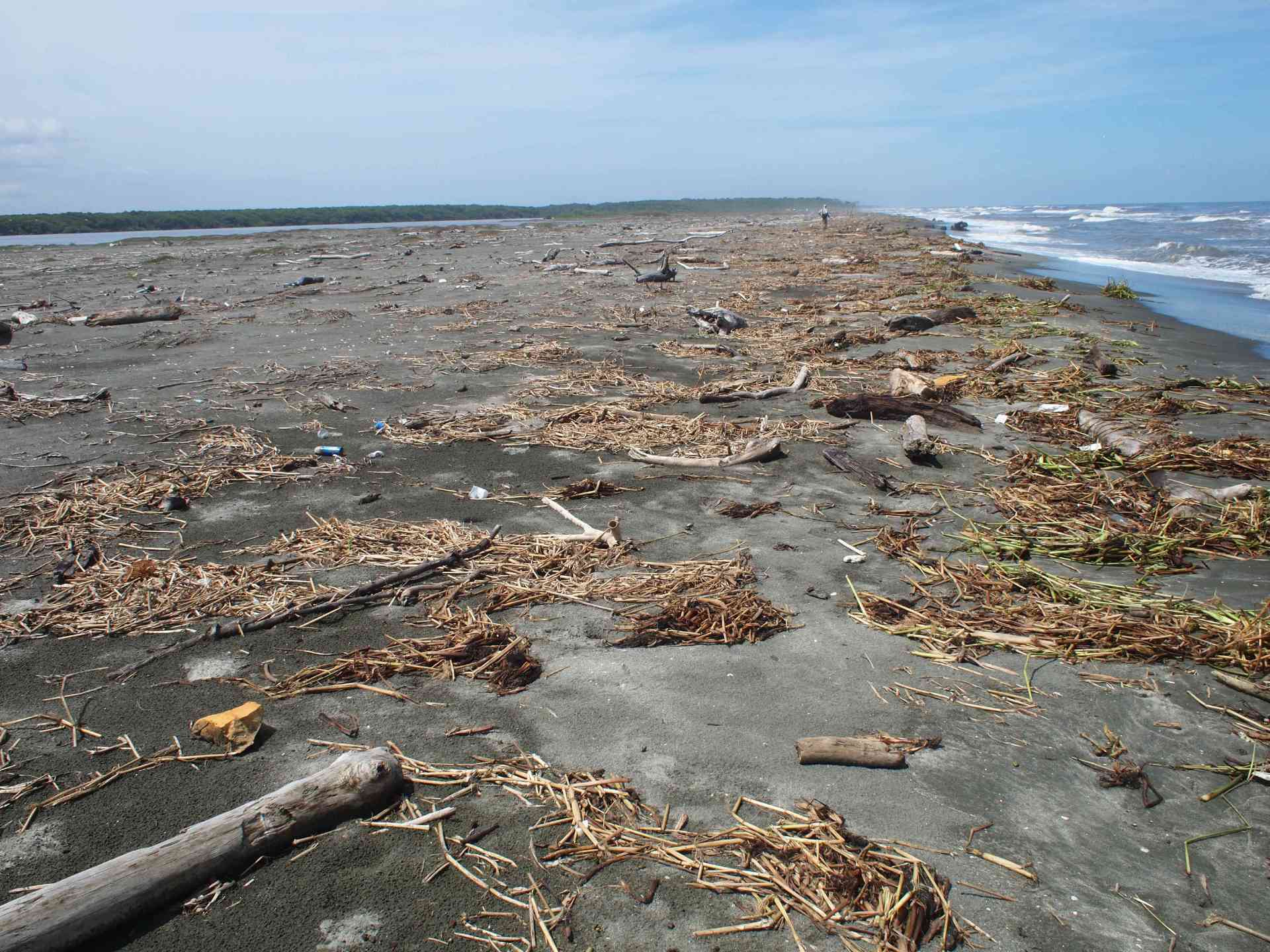 Though they nest in Alaska, western sandpipers spend winters along beaches between the southern United States and Ecuador, where citizen scientists help collect data on them.

The migration of western sandpipers is part of a horde of birds that fly each fall from breeding grounds in North America to winter quarters in Mexico, Central and South America. The four million sandpipers and billions of other birds are part of nature’s narrative that is written on the wind by the annual flight of migrating birds. Saving this story will be one of the challenges for us in the 21st century.

Although they nest in western Alaska, western sandpipers spend the winter along beaches between the southern United States and Ecuador, including those in Mexico, Panama, Peru and Colombia. As the flocks of birds migrate they need to stop along route to find food and rest. The southbound passage of adult sandpipers through North America begins remarkably early. 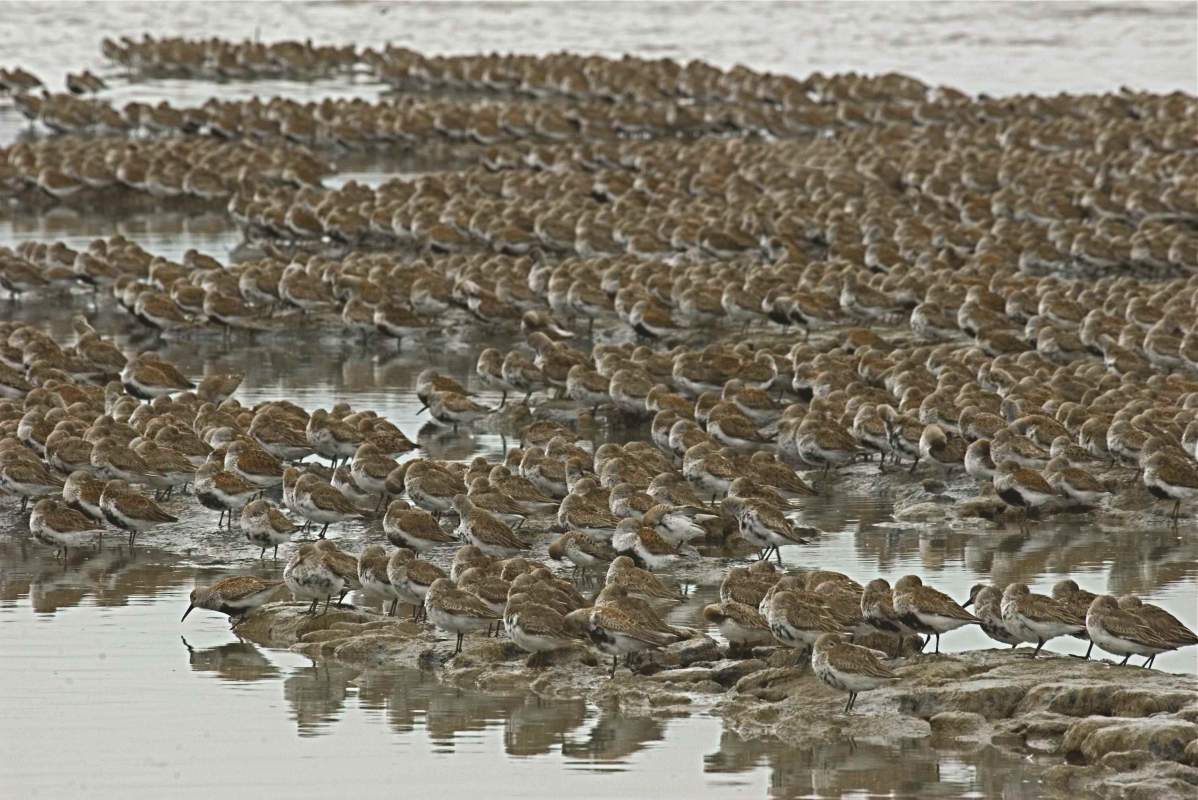 A vanguard of adult sandpipers.

By the time summer officially arrives during the third week of June, a vanguard of post-breeding adult sandpipers will be winging it south across the Fraser River Delta, and by midsummer most will be far to the south. The early migration by the adults is actually a sprint for southern climates, where they will undergo a moult of their flight feathers. Arriving ahead of the peregrines assures them enough time to discard old feathers for new before the peregrines arrive.

Meanwhile, the juvenile birds that hatched only a few months earlier arrive in August, making their journey alone and unescorted by their parents. And hot on their tails are the peregrines.

The comeback of this falcon is one of the great conservation success stories of the 20th century. Diminished in number by eggshell thinning in the last century (whereby the shell’s thickness is compromised by toxins, making it susceptible to breakage), their heralded return is a lesson in caring for our environment, and a celebration of the recovery of the ecological role the predatory falcon has played for millennia.

The life and death dance of the sandpiper and the falcon playing out on the Fraser River Delta opened our eyes to the mysteries of migration, and became the impetus for a hemisphere-wide collaboration among citizen scientists.

Each spring, hundreds of thousands of western sandpipers alight on the deltas to refuel for a flight that will take them to their breeding grounds in western Alaska. With foresight, the Forest Service realized that all its dedication to maintaining the vital Alaskan deltas for shorebirds would be rendered moot unless places where the birds spent the rest of the year were also secured.

Consequently, the Forest Service International Programs and its Copper River International Migratory Bird Initiative came together to assemble a team to collaborate on a hemisphere-wide project. With their support, I flew to Bogota, Colombia, and on to the resort city of Santa Marta on the Caribbean Coast to join colleagues from North, South and Central America. Our goal was to sketch out a collaborative project with the combined talents of professional biologists and amateur birdwatchers. The trip was also an opportunity to see some of Colombia’s birds and visit the haunts of the western sandpiper.

Our international team set off for Isla de Salamanca National Park, designated both a biosphere reserve and a Ramsar wetland. This vast mangrove wetland is home to birds with delicious-sounding names like “the endemic chestnut-winged chachalaca” and “the sapphire-bellied hummingbird.” Our destination was the beaches where western sandpipers were reported to spend the winter.

We boarded an outboard-powered dugout canoe to set off through the wetland, passing simple abodes along the waterway, where families eke out a living by fishing, before veering north to emerge on the Ciénaga Grande de Santa Marta, a large coastal wetland. The extensive marshlands between the Magdalena River and the Caribbean Sea are the heart of Salamanca. Our boat sped across the open water, past fishermen tossing nets, to arrive at a sun-soaked barrier beach overlooking the Caribbean.

I stepped out onto the beach to see a small flock of western sandpipers probing the mud for food. It was as if I had bumped into a long-lost friend. The sandpipers were busy probing the mud in a similar fashion to what I had seen a few months earlier in British Columbia.

Suddenly, as I stood there, a peregrine falcon came in for the swoop, which the sandpipers spotted long before me. Up they flew as the peregrine passed by, and once again I was alerted to an approaching peregrine by their sudden flight. Wherever a sandpiper goes, fear is not far behind.

Citizen science is becoming all the rage these days. Projects such as breeding-bird atlases and wildlife monitoring have taken hold among a cadre of keen and highly skilled amateurs.

Armed with new electronic devices to record and compile data, good-quality binoculars and telescopes, a plethora of excellent field guides, and the enthusiasm of people who want to make a contribution when they travel, a new opportunity has arisen for scientists to gather data on a scale they could only have dreamt about in the past: having local people and travellers to an area gather and collect data, effectively acting as field scientists.

Our shorebird investigation—dubbed the Migratory Shorebird Project—is a collaboration between wildlife and conservation organizations in Canada, the U.S., and Central and northern South America. An agreed-upon protocol has been established on how to census birds and how to enter the data into a data portal at the PRBO (Point Reyes Bird Observatory, a leading non-profit bird ecology and conservation research organization).

Graduate students will be exploring the data to answer specific possible causes for changes in the number of western sandpipers, such as the role of falcons, rising sea levels and habitat changes. The results are intended to provide guidance on what we can do to ensure our activities do not unduly impact shorebirds on their ancient journeys.

The opportunity to participate in citizen science projects such as this is a signal of an emerging trend in field research. Scientists are beginning to recognize the skills and abilities of some amateurs—some often surpass their own. With the right project and proper training, an army of keen observers can tackle projects that span provinces or states—and in our case, the western hemisphere. These citizen science projects are also making science more open to the amateur, who might not fully understand the design and analysis but can add to the interpretation of results.

We are witnessing a return of the amateur to field studies that was once commonplace in the 19th century. Honing identification skills adds to travel, and soon, carrying a data recorder might be as commonplace as a pair of binoculars.**

Dr. Rob Butler is an ornithologist and author with more than 40 years of research and conservation experience, many as a biologist and scientist in the Canadian Wildlife Service. Among many things, he has played integral roles in Canada’s Important Bird Areas Program, the Breeding Bird Atlas of B.C., and the Pacific Wildlife Foundation. Butler is an international fellow of The Explorers Club of Canada, and you can find out more about him on his website here.  (This article first appeared in the “Field Notes” section of Outpost magazine.)