Hiking, flying and exploring the most beautiful rock formations in Turkey, where floating high above is possibly the best way to see it all.

The sun is still rising above the horizon when the hot-air balloon begins to gain altitude. As we do so the moonscape of Cappadocia begins to take shape: a wide stark plain crossed by valleys and rock formations so bizarre they resemble some of Salvador Dalí’s famous paintings in which objects bend, melt and blend together challenging the rules of nature.

If Angeliki and I didn’t know that we were in the heart of Turkish Anatolia, we’d swear we had ended up on the Moon or maybe on Mars. 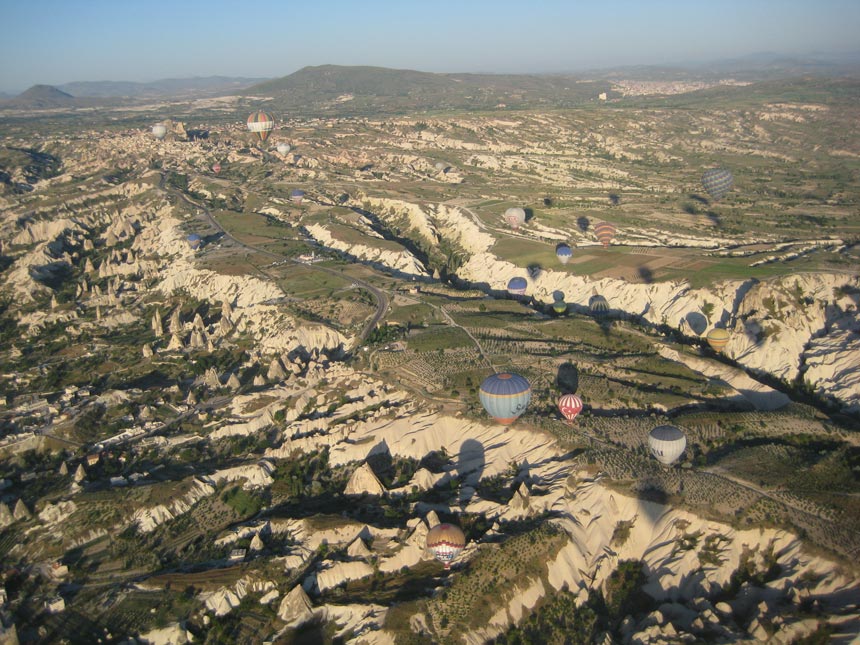 A hot-air balloon flight gives you a unique view over the landscape. Only from above one can truly appreciate the beauty of the scenery as a whole: the deep canyons connected to each other, the orchards and the vineyards growing in the valley floor, the honeycombed ridges, the rock forests, the villages, the geometrical patterns of the fields, the towering mountains in the distance…

Facing this awe-inspiring frame, we can’t but acknowledge how nature is the greatest of artists.

As a matter of fact, what we see was molded over millions of years by the erosive action of the elements on the soft tuff rock left by apocalyptical volcanic eruptions.

The work of man, as if the work of nature was not enough, has made Cappadocia an even more magical place. Since antiquity people have dwelled the area, taking advantage of its geological features to carve out fascinating cave houses and temples and even build large underground cities. 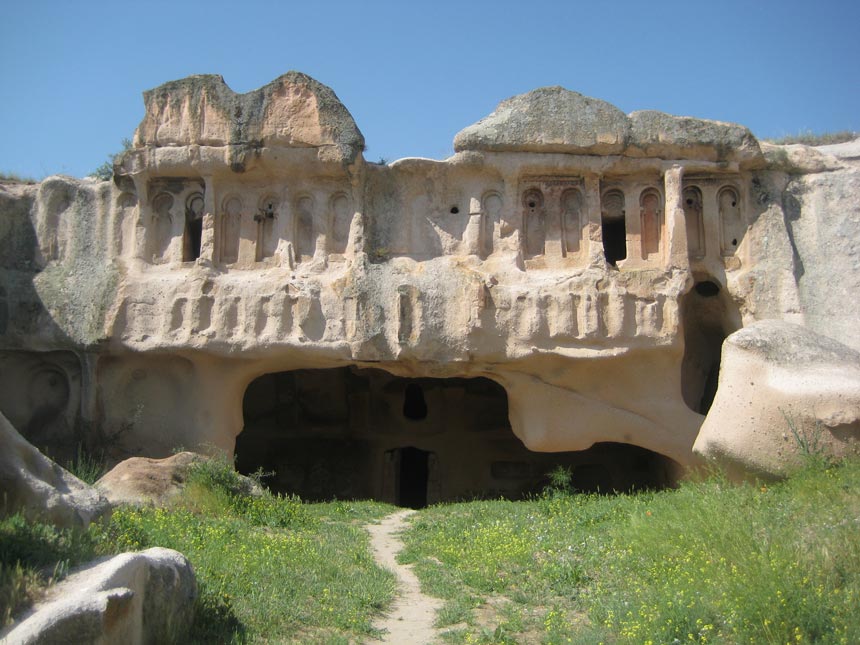 As the presence of stairs, windows, doors and antennas reveals, many fairy chimneys (as are called, these natural spires of rock) are still inhabited; actually some of them have been converted into boutique hotel and B&Bs very popular among tourists.

Some fairy chimneys are as huge as castles. The tallest and most remarkable of these natural fortresses is Uçhisar, whose summit offers breathtaking vistas of the surroundings. If a hot-air balloon flight is out of your budget (prices start from 100 €), make sure you climb up Uçhisar in order to get an glimpse of what you would see from the sky. 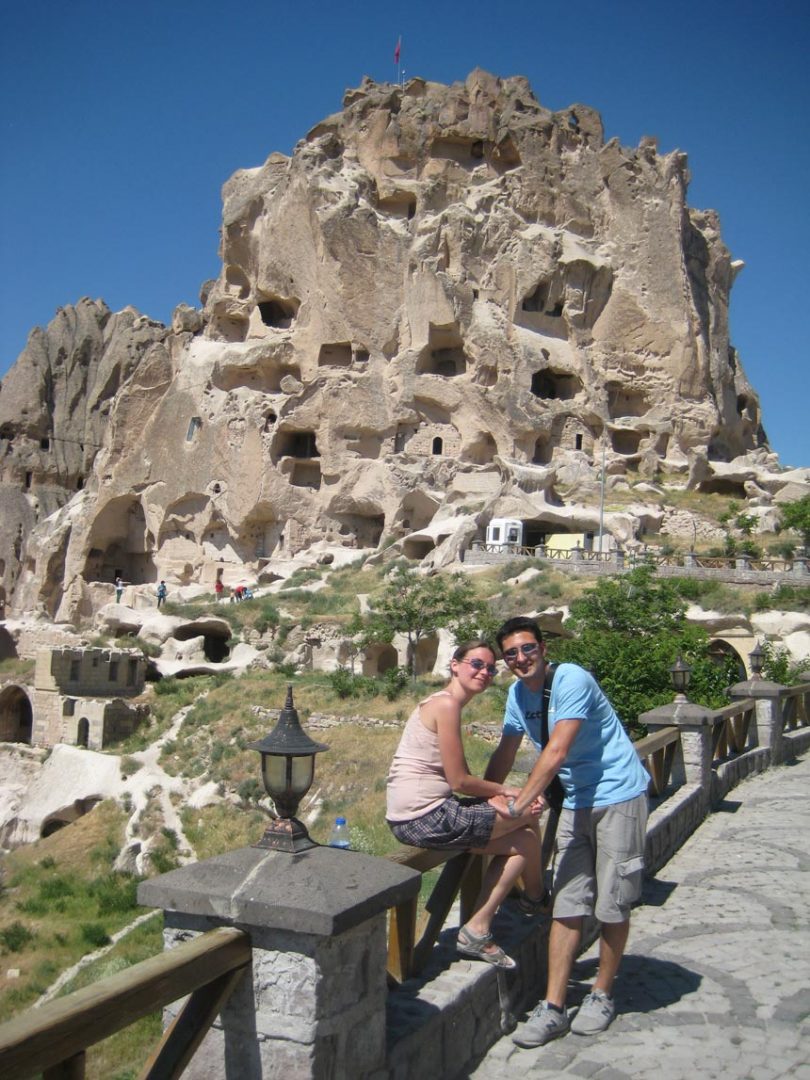 Despite the damages inflicted by the weather and vandals, many frescos are well preserved so that we can still be amazed by the skills of the Byzantine monks who painted them.

Other attractions not to miss are the underground cities of Derinkuyu and Kaymakli, only two of more than thirty similar sites spread around Cappadocia. We reach the former by hitchhiking, a very effective way of getting around here. The labyrinthine complex dates back to Hittite times and was dug by people seeking refuge from raiding armies and religious persecution. The more we enter into the bowels of earth the more we gasp and grope in the dim light. It’s hard to believe that up to 20,000 people could live in these claustrophobic rooms used as dorms, stables, cellars, churches, cisterns, olive-presses etc. 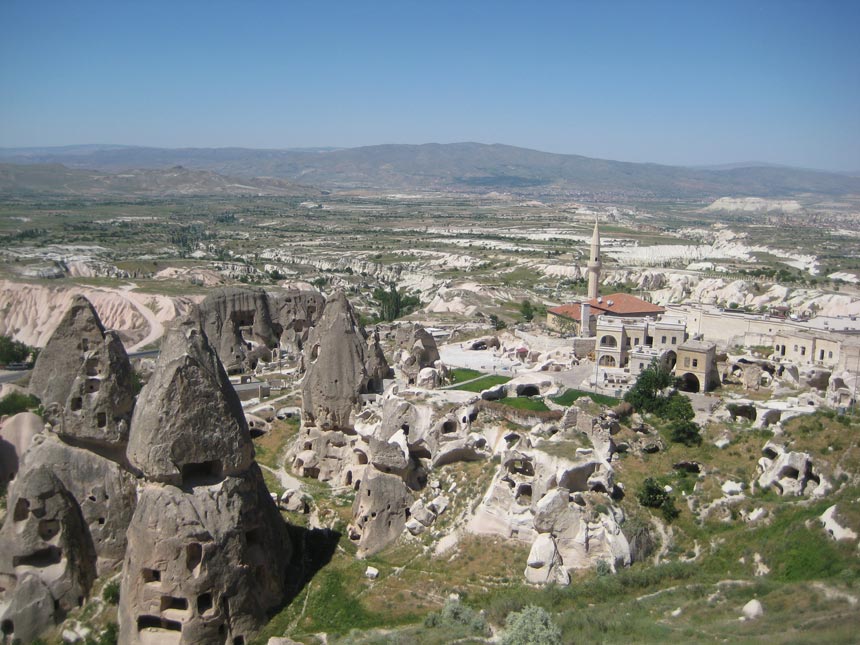 Cappadocia is a real mecca for hiking lovers like us. One can choose among countless walking trails which run through the valleys nicknamed by their own peculiar features: Pink Valley, Red Valley, Pigeon Valley, Love Valley etc. Most of them are easily accessible from the main towns and well sign-posted.

Hiking under the burning sun is quite tiring but we are well rewarded by the mesmerizing landscape made up of fairy chimneys, polychrome ridges and cave-dwellings located in apparently inaccessible locations in the hillside. The hike through the Ihlara Valley is somewhat different from the others as the landscape is not barren but covered with lush vegetation fostered by a stream.

Along its 16-km path, hundreds of rock-churches and monk cells are found.

After visiting the most interesting ones, we treat ourselves to a fish lunch in a little stilt restaurant over the river. At the end of the valley, we still have some energy left to climb the astonishingly huge Selime monastery which occupies an entire hill.

Ihlara Valley is a bit out of way from the centre of Cappadocia (about 40 km south-west), nonetheless you can get here by joining an organized tour, renting a car or, with a bit of luck as we did, by hitch-hiking. The numerous Cappadocian Greeks had to leave their homeland in 1924 when the Greek-Turkish Population Exchange was enforced. Following this mass migration, many villages of Cappadocia were abandoned and partly repopulated by ethnic Turkish people. 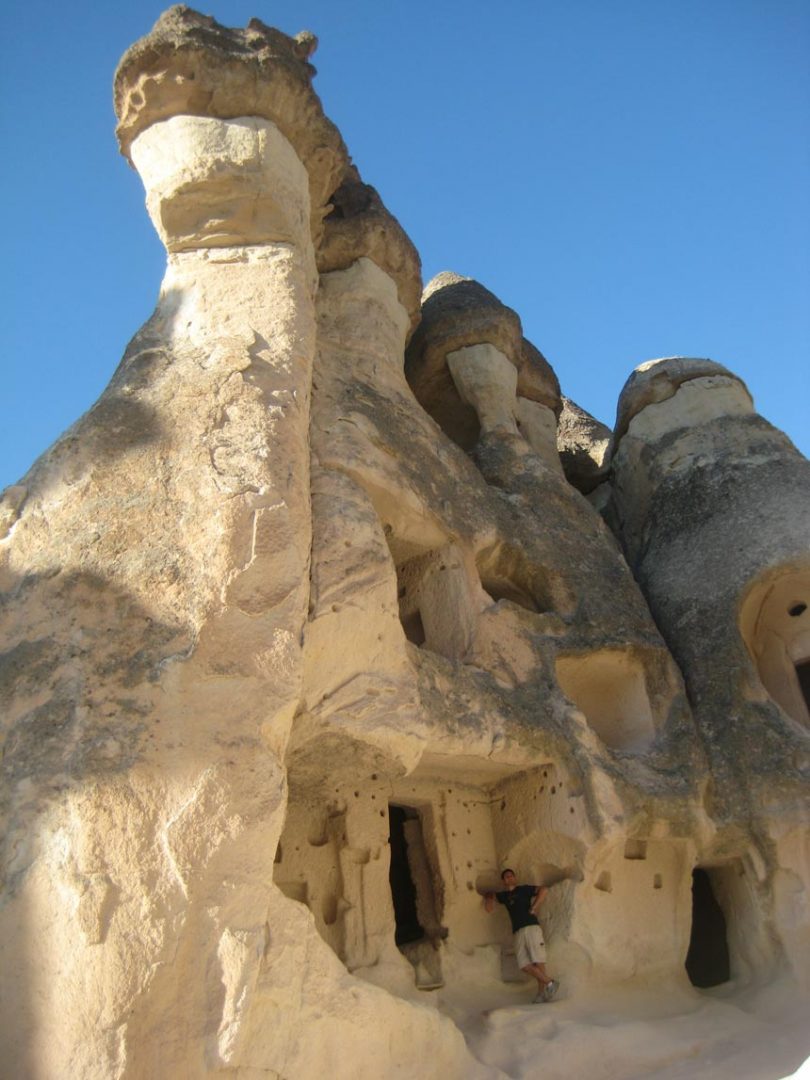 Dario poses for scale near an enormous rock structure.

As a Greek, Angeliki is particularly touched by the visit to Mustafapasa, formerly known as Sinasos. Walking through the pebbled streets, we come across an old church and fine yet neglected buildings that once belonged to the wealthy Greek community. Most tourists spend only two, three days in Cappadocia limiting their visit to the main sights. That’s a shame because there are plenty of places to see and activities to do: horse-riding, mountain biking, pottery courses, wine-tasting tours, shopping and dining in charming towns. A whole week wasn’t sufficient for us to do all we planned to, but it was enough to make us fall in love with this dreamlike place.

A Stranger at Home: On Reverse Culture Shock