Buttermilk-Fried, Finger-Lickin’ Chicken: Our southern-fried classic is just as mmm-mmm good as that “other” one!

By Emma Waverman and Eshun Mott

From French fries to samosas, hot oil is the secret to many addictive foods. And fried chicken is no exception, ranking up there with the ultimate in deliciously greasy pig-out meals. 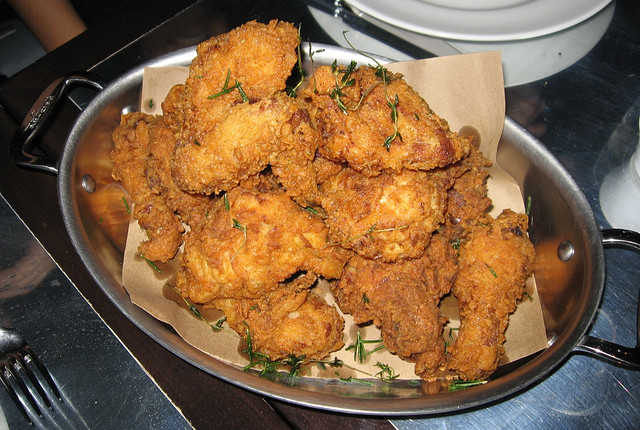 While we may think of fried chicken as a distinctly American Southern classic, many cultures have a tradition of battering up poultry and slinging it into hot oil, including Vietnam’s Ga Xao, Italy’s pollo fritto and Austria’s Viennese fried chicken (Wiener Backhendl).

But it was the Scots who brought fried chicken to the United States and the American slaves who popularized it. Slaves were allowed to keep cheap sources of meat, such as chicken, for their meals and they found that frying it in the Scottish manner, but adding their own spices and seasonings, enhanced the flavour of the tough birds.

We can thank the Colonel (yes, that one) for bringing fried chicken up north and into the modern diet. In 1930, Harland Sanders started frying up chickens on two cast-iron pans in Kentucky. By 1964, Colonel Sanders had more than 600 franchises and shortly after sold the company for $2 million.

In 2006, KFC reported to serve more than a billion pieces of fried chicken, using the Colonel’s secret recipe of 11 herbs and spices.On the other end of the dining spectrum, you have Thomas Keller of the famed high-end French Laundry Café and Ad Hoc. He serves a complicated two-day fried chicken that his diners won’t let him take off the menu.

So it seems fried chicken appeals to fast-food lovers and foodies alike. But, luckily, you don’t have to venture out for delicious fried chicken. It’s not hard to make at home and it’s worth it! Just don’t nibble off all the crispy bits before it gets to the table, like we did!

Great fried chicken is all about the little details. Soaking the chicken pieces in buttermilk overnight keeps it amazingly juicy through a long frying process. A cast-iron pan is essential and a 12-inch pan is the minimum size you need to cook a whole chicken at once, otherwise cook the chicken in batches and keep it on a rack at room temperature. And you must watch the temperature of the oil—a candy/frying thermometer is helpful here—because while the coating on the chicken can get quite dark brown, the chicken inside may not be fully cooked inside. A tangy coleslaw makes a nice accompaniment.

Emma Waverman and Eshun Mott are longtime food writers and recipe developers who penned a column for Outpost magazine, and co-authored the family cookbook Whining and Dining: Mealtime Survival for Picky Eaters and Families Who Love Them. You can find Emma regularly at Here and Now on CBC Radio One.

Emma Waverman is a food and lifestyle writer. Her work has appeared in Toronto Life, Outpost and Food & Drink, and just too many others to list! Eshun Mott writes about feeding picky-eater kids, and is a trained chef and professional recipe developer.