Funding Your Expat Life With ESL | The tortured sounds of the alphabet song drifted across the lobby for the fifth time that day. From the next room, rising above the muffled voices, I heard, “Teacher, what does it mean, ‘feces’?”

I sighed and rubbed my eyes, fighting sleep.

“What is…what is surprise?” said Tomio, the pudgy bald Japanese salaryman sitting across from me. He jiggled his leg beneath the table and looked up from his textbook. “I don’t know this word surprise.’”

Without blinking an eye, I nailed the table with my fist. Pens and pencils leaped to the floor. Tomio bleated like a startled sheep.

“Bikkurishita! I am scared!” Struggling to control his fluttering heart, he twitched and squirmed and adjusted his tie. “You are mean! Ryan is mean!”

“Well, you won’t forget ‘surprise’ again, will you?”

Looking back on my teaching years, I’m certain that I had the easiest job in Japan. A foreigner’s job in Japan is always easy compared to the local standard, but mine was easy compared to other English schools. I was paid a generous full time salary to spend four or five hours a day talking to people, playing games with children, and nodding, smiling and faking polite interest. 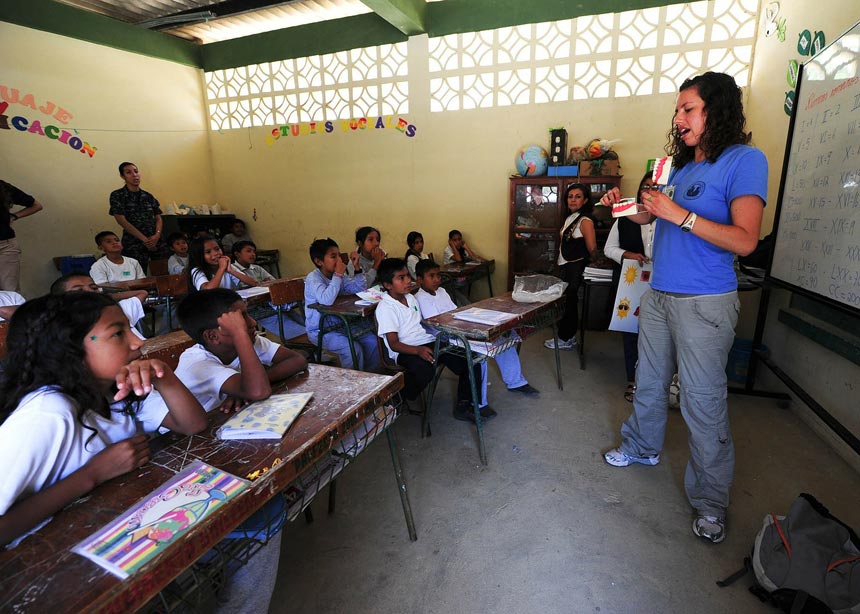 And I spent every break—and those frequent one-hour blocks when someone didn’t show up—writing my first book, Vagabond Dreams.

Expat jobs aren’t always like this, but they can be if you shop around.

Teaching English as a Second Language (ESL) can be a great way to travel, to experience life in a new country, and to save money for further adventures. I used it as a way to find a job and relocate to Japan within 2 weeks when my girlfriend at the time—now my wife—finished university in Canada and had to go back home.

That was my first experience of Expat Life. I spent just under two years living on the outskirts of Tokyo, in a little suburb called Tachikawa. And then I took the nice pile of money I’d saved and I traveled to the remote corners of Mongolia and China. Of course, not everyone is cut out to be a teacher. I wasn’t. But you’ll find a surprising number of professionals in this field who devote their entire careers to ESL abroad.

How can you get into ESL, and how does the field scope out?

English conversation schools are a thriving global business, and the necessary qualifications depend upon your target region.  The Middle East generally offers the plushest contracts, but they also require the most experience, and employers generally prefer hiring teachers with graduate degrees in ESL.

Most of the Latin American possibilities are in countries like Chile, Mexico and Costa Rica, with the odd one cropping up in smaller places. The pay isn’t as good there, and they seldom offer airfare. By far the most abundant teaching jobs are to be found in Asia, especially China, Japan, Taiwan and South Korea. Some contracts include airfare, generally paying the return portion of the ticket upon completion of a one or two year term. And others include paid vacation time and benefits.

When searching for a contract, an ESL certificate course such as TESOL can help, and some countries require a university degree to issue a work visa. But many schools require nothing more than being a native English speaker. The higher the demand for teachers in a region, the more latitude you generally have.

It’s an interesting world, with some amazing opportunities to live and work in a country you might only have passed through with a backpack. But be warned. Horror stories about unscrupulous schools exist, so make sure you do your homework before committing to a contract.

And don’t worry if you haven’t got a lot of experience. There are plenty of resources to get you started.

Dave’s ESL Café is the most comprehensive online resource for teaching tips and lesson ideas. And their international job boards are second to none. That was where I found my teaching job back in 2000 when I moved to Japan.

If you decide to give teaching ESL a try, keep these 5 tips in mind:

Many of the teachers I met abroad were professionals who cared about their work, but just as many were irresponsible slackers whose priority was their own free time. Don’t be one of the latter.

Montenegro, South to North | An Adriatic Beauty Worth Exploring

Could Airlines Start Weighing Passengers Before They Board?