From the OP archives: “You can go there if you like, but watch out for the police: they don’t like people poking around!” That time our super-senior correspondent ventured into forbidden territory in Panama. Or…was it?

The Boeing 747 swept low over Lake Victoria before landing with a bump and taxiing to the terminal building. From the open window of my cab a few minutes later I glimpsed a bullet-riddled building overrun with weeds and surrounded by swaying grass.

“Yes,” my driver answered from the rearview mirror, before I could even ask. “That’s the old terminal building, from the hijacking.”

Entebbe would be largely unknown, if not for a headline-grabbing event in 1976. An Air France Airbus flying from Tel Aviv to Paris was hijacked and forced to land at the Ugandan capital’s airport. There, the country’s dictator, Idi Amin, welcomed the hijackers and provided Ugandan troops to guard the Israeli and Jewish passengers held hostage in the terminal. Several nights later, Israeli commandos swooped down on the airport and freed 102 hostages, much to Amin’s anger and embarrassment.

“What do people think of Amin today?” I asked my driver hesitantly, reminded that you should never discuss religion, politics or Justin Bieber in company.

“I wish he was still here,” he answered.

Although I know taxi drivers don’t necessarily reflect the majority opinion, I assume they are representative of at least some of their fellow citizens, so I was rather shocked by his response.

I didn’t expect to find many fond sentiments for the infamous tyrant believed responsible for possibly 500,000 deaths.

“We wouldn’t have AIDS or crime or the war in the north,” he added, proving that even the worst of dictators can find some support for any number of reasons. Amin’s not the only dictator whose infamy long outlives their rule, however.

In Central America, Panama pulsates with centuries of history and legend, yet pirates and explorers have been overshadowed by recent events, and one ruler in particular.

“Can you believe that when the Panama Canal was owned by the U.S., if a Panamanian crossed this road toward the American Zone without a good reason they could be shot?” asked Amelia, as we drove through Panama City. “They could drink in our bars and eat in our restaurants, but we couldn’t do the same in the zone that cut our country in two.”

“And over there is the Chorrillo neighbourhood,” she continued, as we made our way from the airport to the Pacific Coast, “which burned for days when the U.S. invaded in 1989 trying to get General Noriega.”

“What do people think of him now?” I asked, referring to Manuel Noriega, Panama’s former strongman dictator.

“Noriega was America’s man,” she said. “Until the U.S. decided they didn’t want him anymore. So they invaded. We’re glad he’s gone, but he was always their man.”

I settled into my hotel room, and took a stroll down to the beach.

“Fancy a Farallon?” asked Enrique, referring to a local rum drink. “It’s named for the neighbouring town. It’s long been a popular spot for Panamanians. The [country’s] former [unofficial] president Omar Torrijos had a home here. And down there,” he said, pointing toward the end of the bay, “is General Noriega’s old beach house.”

“Who lives there now?” I asked, sipping the creamy concoction.

“No one, it’s abandoned,” Enrique answered, before looking around and leaning forward conspiratorially. “You can go there if you like, but watch out for the police: they don’t like people poking around.”

Clearly, this was too good an opportunity for an intrepid travel editor to miss, and I decided to pay a visit to it the next day. But first, just to be culturally sensitive, I downed another Farallon!

My completely casual and totally unpremeditated stroll along the beach began in the late morning. Disguised as a common or garden tourist in my floral blue swim shorts and ubiquitous Panama hat, and with my camera hidden in a straw bag, my dedication to spycraft knew no limits—I threw in a minor sunburn and a final swig of Farallon to complete my cover. 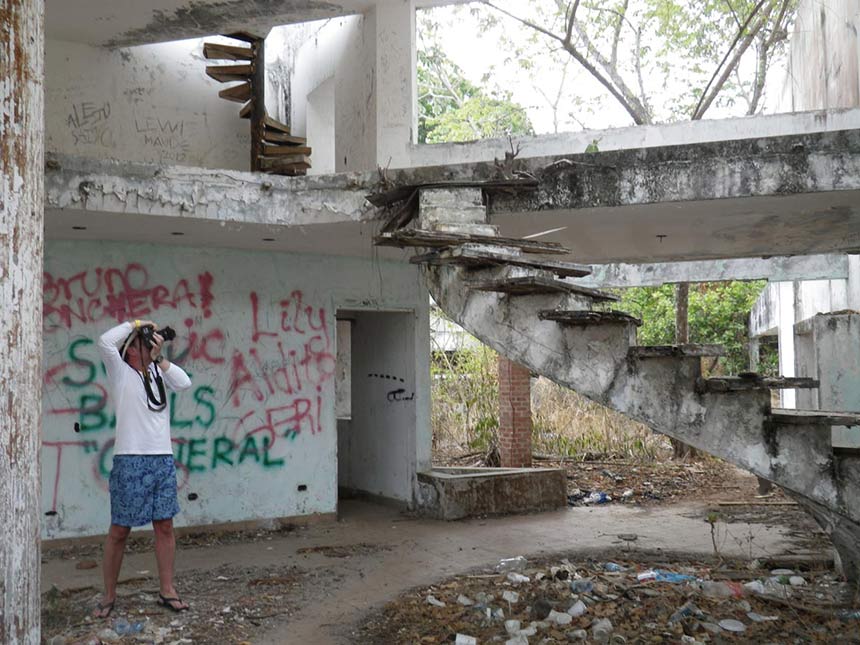 I skirted the stray dogs and sidestepped the cannonball jellyfish that lay pulsing on the sand, stranded by the previous evening’s high tide, and casually ambled along the white sand. Checking to see if I was being tailed, I stopped and bent down to retie the laces that my laceless flip-flops didn’t have.

It was only as I rose and carefully surveyed the flotsam and jetsam for concealed secret police that I glimpsed a sun-faded curving balustrade peeking through the palm fronds. I edged forward for a closer glimpse, and there between the trees was the fallen magnificence of a once beautiful beach house. 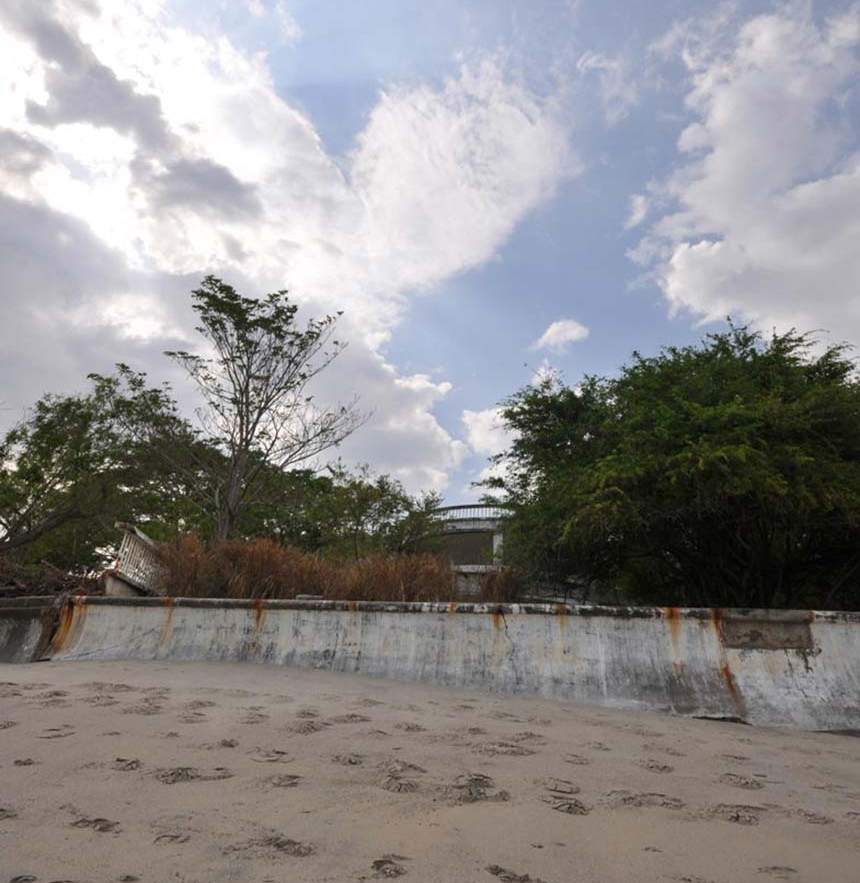 The old house sits on one of Panama’s best beaches in Farallon, just metres from the crashing surf of the Pacific.

Edging to the dilapidated concrete retaining wall that marked the property’s boundary I halted once more, and using a swat at an imaginary mosquito as cover, scouted for a way in, while making sure I was truly alone. Finally, I clambered over the fallen wall, eased through the rusted fencing and silently followed the remnants of the paving stones, now cracked and covered with brittle leaves and windswept sand. I ducked under the low branches of a tree, sidled by a weather-worn wooden bench and found myself staring into the General’s exposed living room.

As there was no doorbell to ring, I ventured inside unannounced, rudely devoid of either housewarming flowers or a bottle of wine.

The room was large, bright and airy, although that likely had more to do with the missing walls and ceiling than the original design of the architect. The remnants of a spiral staircase rose from the corner, winding up into a circular aperture. The walls were covered with daubed graffiti, some anti-Noriega, but most of the “Kilroy was here” variety.

The house had long ago been stripped of anything of value, but the remaining floor and wall tiles hailed to the days when Noriega—resplendent in the red thongs he’d reportedly fled in as U.S. troops approached—hosted his wild parties. That was only 24 years ago, yet the jungle was already reclaiming the house, leaving it to dissolve into the forest like a forgotten Mayan village. 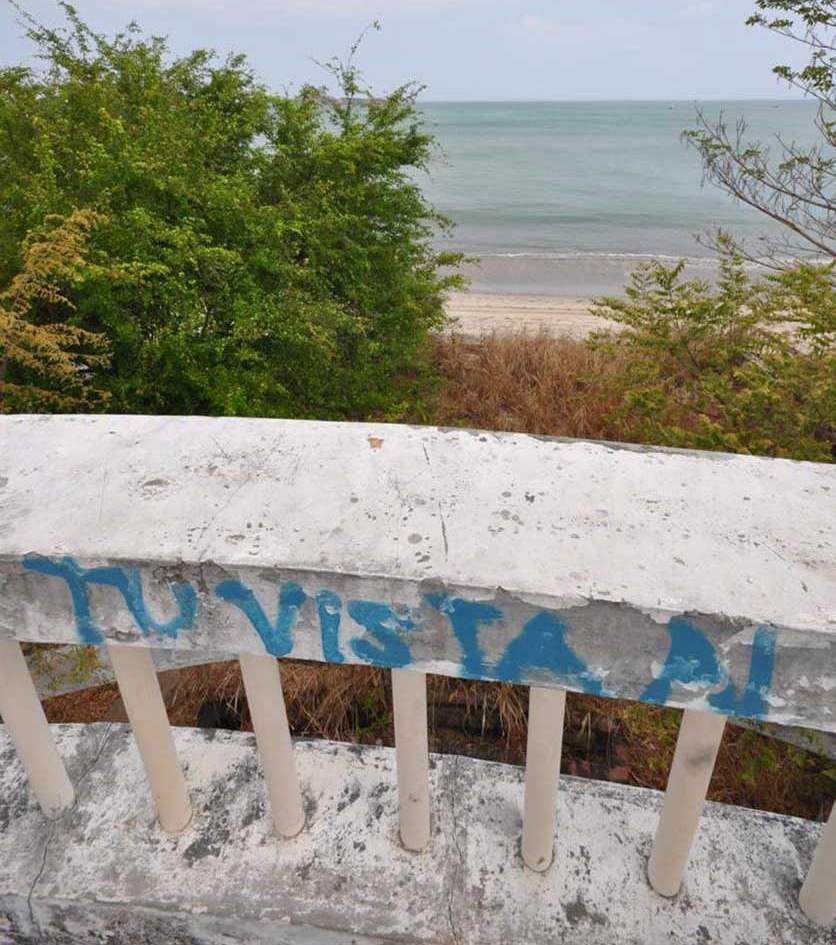 The graffiti reads “Your view of the sea,” possibly a taunt to Noriega’s current view: cell bars.

Suddenly I heard a noise and froze. Wary of squatters, the secret police (or just the fashion police, who might be insulted that my Panama hat had been made in Italy!), and creepy crawlies, given my non-snake-proof sandals, I listened intently. But the stirring was nothing more than a salty ocean zephyr swirling through the leaves.

I headed for the remains of the spiral staircase. The banister was long gone and most of the steps were nothing more than their concrete spine, but I quietly balanced upwards through to the second floor and emerged into a set of rooms that faced out toward the crashing waves and backwards to the overgrown gardens.

During their invasion, U.S. Forces had landed at the nearby Rio Hata Air Base—now being developed into an international airport—and once secured, a detachment headed down to the beach house. They were greeted by Noriega’s domestic staff, who told them the General was not there. Inside they found the very room in which I now stood lined with mirrors and adorned with porcelain figurines of young girls and a king-size bed with a Hindu love goddess carved into the headboard. They also found a 50-kilogram bag of cocaine…which they later admitted was actually just tamale flour. 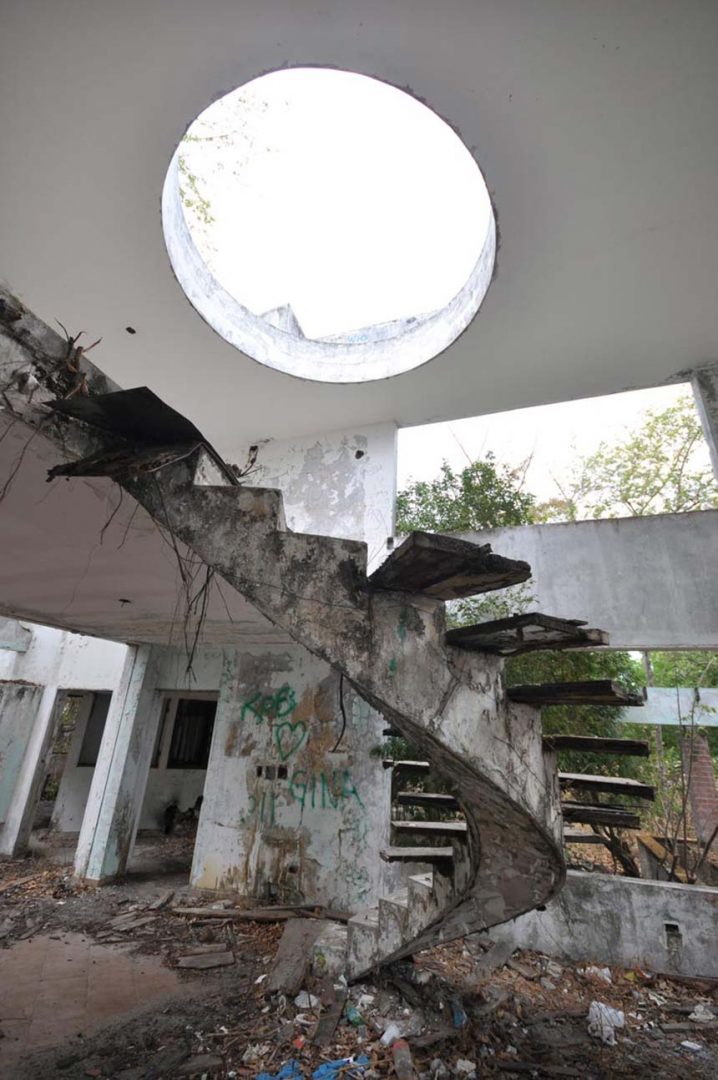 In his other homes, the Americans had found a walk-in cigar humidor and an elaborate altar for Voodoo-like Santeria worship, so it was hard to tell whether the tree I found growing through the tiled shower-cabinet was a natural modification or just one of Noriega’s eccentricities. Vines wound up the walls, while a small green lizard scampered across crumbling masonry.

Tiptoeing up a second staircase, I found myself on the roof terrace whose arcing balustrade I had glimpsed from the beach. There was still a tiled bar in the corner and a panoramic view of the beach and the bay.

Graffiti painted on the railing read “Your view of the sea,” possibly a taunt to the previous patron whose most recent views had been nothing more than the bars of a prison cell.

A path wound its way through the overgrown back garden toward a big metal gate in a high wall. I peeked down the quiet road, which I imagined was once guarded by heavily armed soldiers but was now protected by nothing more than a sign in Spanish threatening me with a fine or arrest for trespassing. 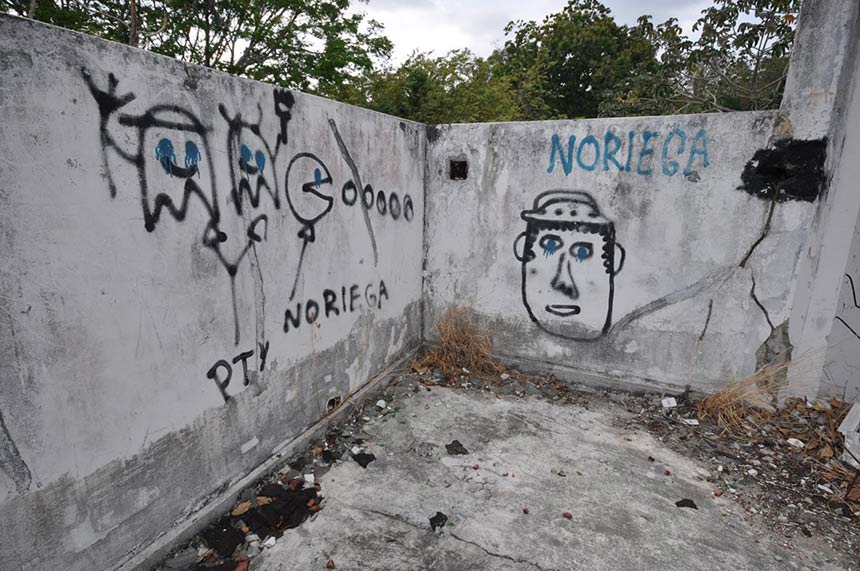 Noriega once hosted extravagant parties on the rooftop patio, but the closest he now comes to the property is in graffiti likeness.

Back on the beach, I gazed once more at the concrete steps that had been knocked askew by time and were sinking elegantly into the sand. I slipped my camera into its hiding place, and in my deep disguise headed back the way I’d come, proud of the intrepid investigation that had unveiled this forgotten slice of modern history, and my ingenuity and courage for exploring it.

A few steps down the beach I encountered a small group of brightly clad sunburnt tourists. Their leader held aloft a furled sun umbrella, and was speaking, just as I passed.

“OK everyone, follow me. Next stop is Noriega’s old beach house.” ♦

Travelling RTW: What To Do