Georgia’s adhoc bus system is chaotic, dangerous, bumpy and amazing. Here’s how to ride them like a local.

Story and Photos by MaryAnn Ciosk

At half-past midnight we found ourselves hurtling down a potholed road, with no light from either the moon or street lights, in a van that my Canadian sensibilities regarded as little more than scrap metal. Georgi, our driver, sipped his Coca Cola as he revved up the engine, pushing us to 150 kilometres per hour.

He wove through traffic with the grace and finesse of an inebriated, rampaging rhinoceros. He blazed down the road to the rear bumper of the car in front of us, then, seconds before contact, abruptly swung into the lane of oncoming traffic to pass, without any forethought.

How do I know there was no forethought? Because blinding car headlights told me there was a car in the oncoming lane, mere metres ahead of us. Another sharp, nauseating swerve back into our lane returned us to comparative safety.

You might assume the most likely causes for this harrowing experience were a) abduction or b) an ill-advised joy ride. In fact, this was just another routine trip to a new city in the country of Georgia. Unless you happen to be following one of the few train routes through the country or can afford an expensive taxi (which is no safer), riding a marshrutka is the only option to get between cities. 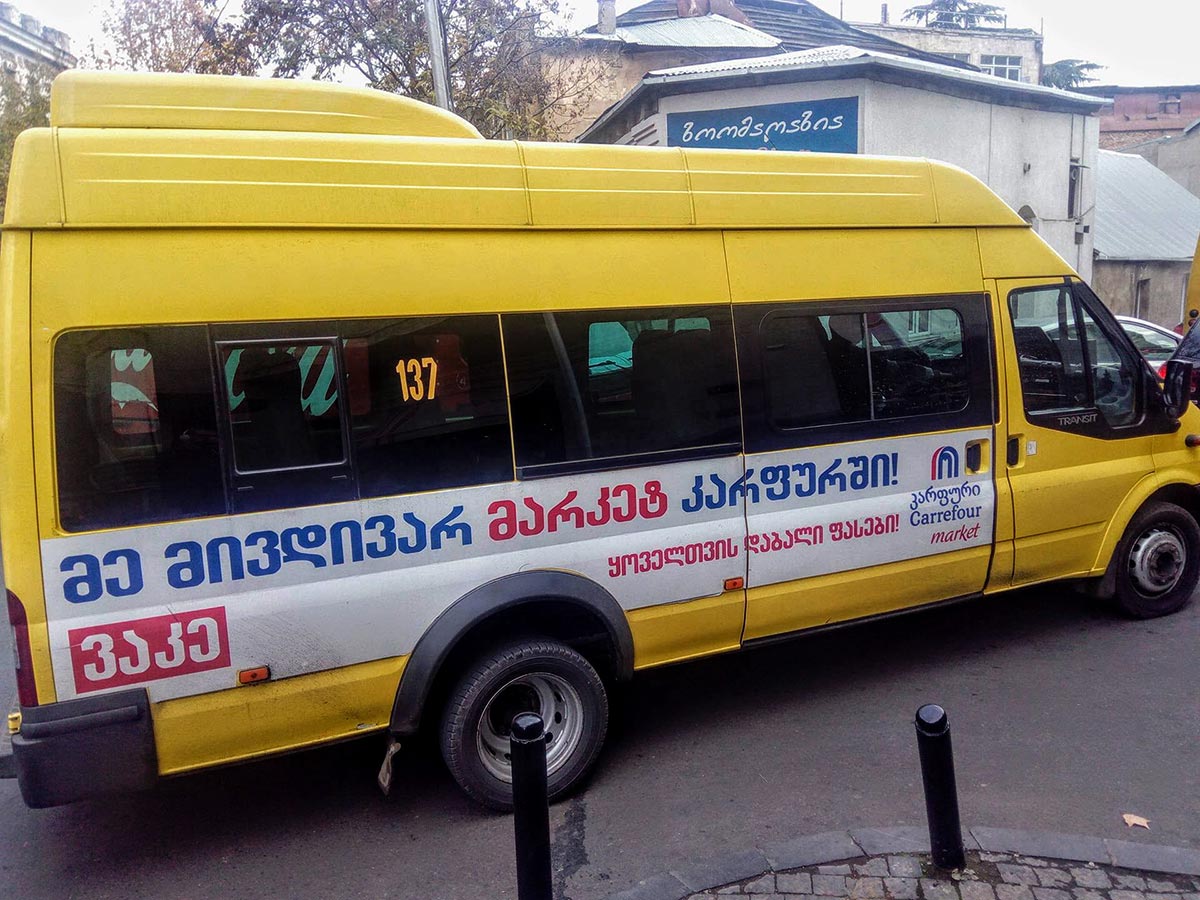 What is a marshrutka? That depends on a host of variables such as your departure city, the time of day and your luck. Most often, however, a marshrutka is a large, old, unmarked white van, complete with a roomy interior made roomier by large chunks of car-meat missing from the walls and ceilings. The little curtains adorning the windows are so old, threadbare and dirty that their primary purpose seems no longer to be keeping out light, but transporting passengers back in time, allowing them to experience authentic filth from the past decade.

There are usually three or four rows of three seats (the operational definition of “seat” being a hard surface haunted by the memory of a bygone seatbelt); however, the whole concept of what a seat can be has been completely deconstructed in Georgia. A driver earns according to how many people he can fit inside his vehicle, so it’s common to squeeze an entire family into three “seats”.

Fasten Your Seatbelts (If You’ve Got ’Em)

To find passengers more quickly, there’s often a sort of marshrutka-specific town crier whose job is to repeatedly call out, in a mesmerizing sort of chant, the name of the city to which the marshrutka will try and deliver you alive.

The first time we saw the marshrutka crier, we mocked him.

“Yeah, like people just walking by on the street are going to be like, ‘Oh shit, did that guy just say Tbilisi? You know what, forget dinner, I could really go for a two-hour drive to the capital right now.’”

But the marshrutka crier is not to be mocked. He has a valuable role to play.

We later learned this in Kutaisi’s “bus terminal”. This is no greyhound station—there’s no reception, ticket booth or timetable. It’s instead a large, open space near a market place where dozens of marshrutkas congregate and wait for enough people to fill their vans before departing for their respective cities. 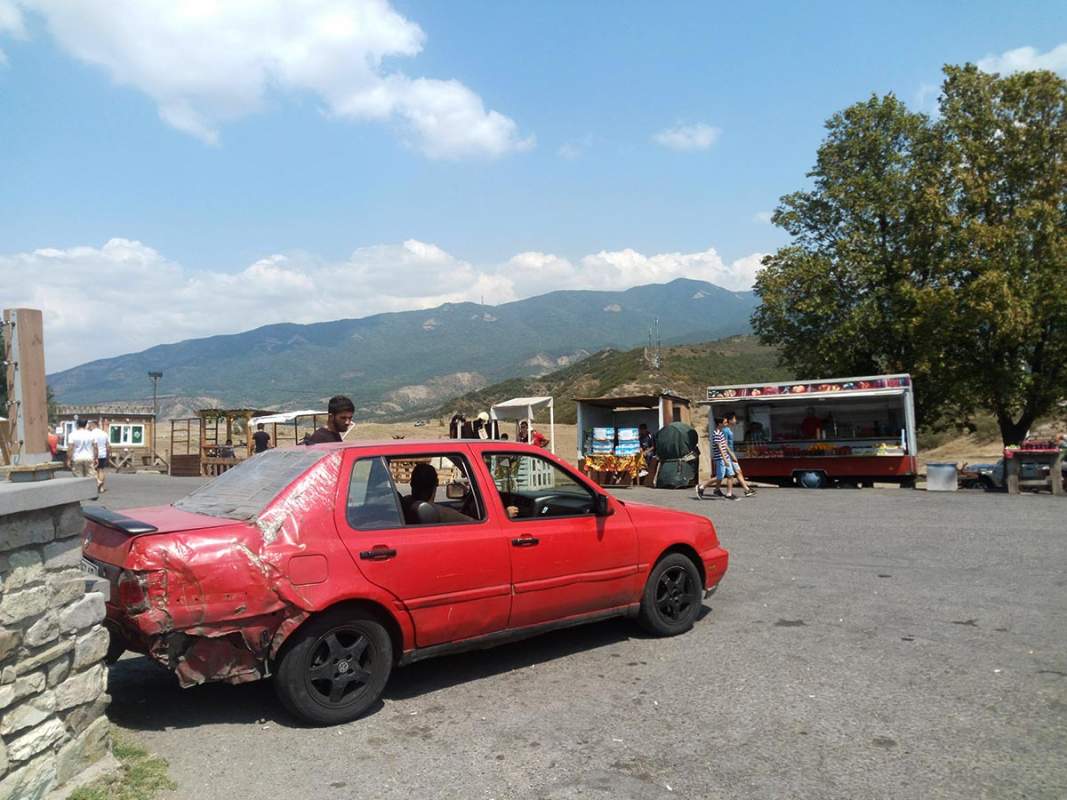 The trouble is that there are dozens of marshrutkas haphazardly sitting together. While there is some signage, there’s none in English.

Where’s the marshrutka crier when you need him?

We approached each driver (identifiable by being the guy standing outside a marshrutka, smoking, talking with another guy, or having a beer) and asked the name of the city we were looking for.

The first man we asked shook his head and pointed farther into the muddled mass of broken-down off-white vans. We saw two guys in an animated conversation outside a van.

They look up. “Tbilisi?” They shake their heads in unison and wordlessly point in the same direction, towards a man standing with his hands on his hips, a dirty white tank top pulled up over his rounded potbelly.

When we mention the country’s capital, he nods curtly and ushers us into the backseat of the most glamorous marshrutka I’d ever laid eyes on. It was definitely produced this current decade, with seatbelts and, amazingly, TV screens for every person! (Each person, not passenger—there was also a screen beside the driver’s steering wheel.)

Although you might sometimes wait hours in a smaller city until a marshrutka is full enough to depart, ours filled up in just 20 minutes. And, astoundingly, our driver only allowed as many passengers as there were seatbelts in the car!

But the magic of marshrutkas is that you never quite know what you’re in for.

As soon as the van was full and the doors closed, all 11 TVs simultaneously began blaring Russian music videos. As this was a night trip, it was impossible to see anything but the scantily clad teenage Russian girls dancing on the screen barely a foot in front of my face, nor could I hear anything but the painfully loud club music. It was impossible to even form coherent thoughts, let alone have a conversation.

This strange torture continued for the entire three-hour duration of the trip.

So Why Ride a Marshrutka?

While you might be put off marshrutkas because of the drivers’ penchant for high speeds, laissez-faire attitude to the van’s physical condition, or the torture methods seemingly appropriated from the Cold War, I would still recommend taking one.

Yes, they’re wildly unsafe. But they’re also really cheap—like, “$2 to go 200 km” kind of cheap. And the lack of organizational structure means they’re also absurdly flexible. You can wave down a marshrutka on the road and they’ll stop to squeeze you in; you can tell the driver wherever you want to get off along the way; you can even get him to wait for you while you pee somewhere (provided you’re a good mime if you don’t speak Georgian or Russian).

Besides, this is how Georgians have travelled between cities for their entire lives, and it’s basically the only option if you want to discover the rugged beauty of Georgia’s beaches, venture into its massive underground cave network or marvel at the oddly reverent depiction of Stalin in his hometown’s museum.

Georgia is a strange, chaotic, and wonderful country, and I couldn’t think of more appropriate vehicle in which to explore it than a marshrutka.

MaryAnn is a Canadian in Paris—and since she can’t sing or paint, she writes. She’s been globe-wandering since childhood and has meandered through six continents looking for weird things to do.

SO glad you made it back home for Christmas in Canada!