Sicily, an island southwest of Italy’s boot, is the stuff culinary dreams are made of. But before diving into the mouth-watering topic, it’s important to note that Sicily is an all-around fantastic tourist destination. It boasts world-class beaches, hiking trails and nature reserves, several lava-spewing volcanoes, traces of ancient Greek and Roman amphitheatres and temples, elaborate Baroque architecture and sprawling open air markets. And, yes, the food there is simply divine.

Close to northern Africa and surrounded by the sea, it should come as no surprise that Sicilian cuisine is quite different from the pizzas and pastas that define Italy. In Sicily, you’re more likely to stumble upon fresh fish couscous than spaghetti or lasagna. Other Sicilian classics include cannoli, arancini (fried and stuffed rice balls) and granite (sorbet that, to my delight, is encouraged for breakfast).

But as I quickly learned, it’s impossible to talk about Sicilian food without mentioning the Sicilian pistachio.

In Sicily, pistachios are added to everything—pasta, pastries, gelato, liquor. Also known as “green gold,” the pistachio is a member of the cashew family with Middle Eastern origins. It’s said that pistachios were first imported and planted in Sicily during the Arab rule in the ninth century. 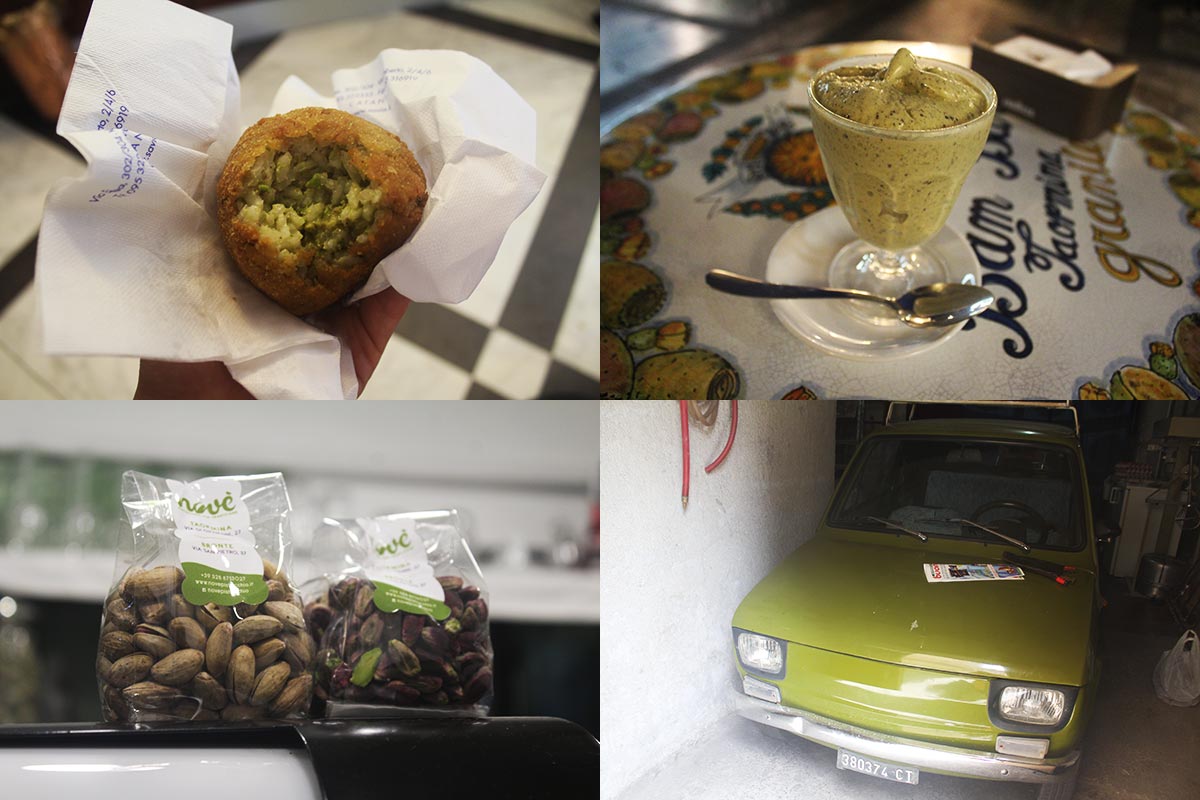 The most impressive thing about this little nut is where it grows best—on the foot of one of the world’s most active volcanoes. About 80 percent of the region’s pistachios grow on the fertile lava soil at the base of Mount Etna, about 900 metres above sea level.

Etna is so active, in fact, it erupted in March 2017 and the summit remained closed for several months. (I managed to climb Etna—twice, by sort of accident—but that is a whole other story.) 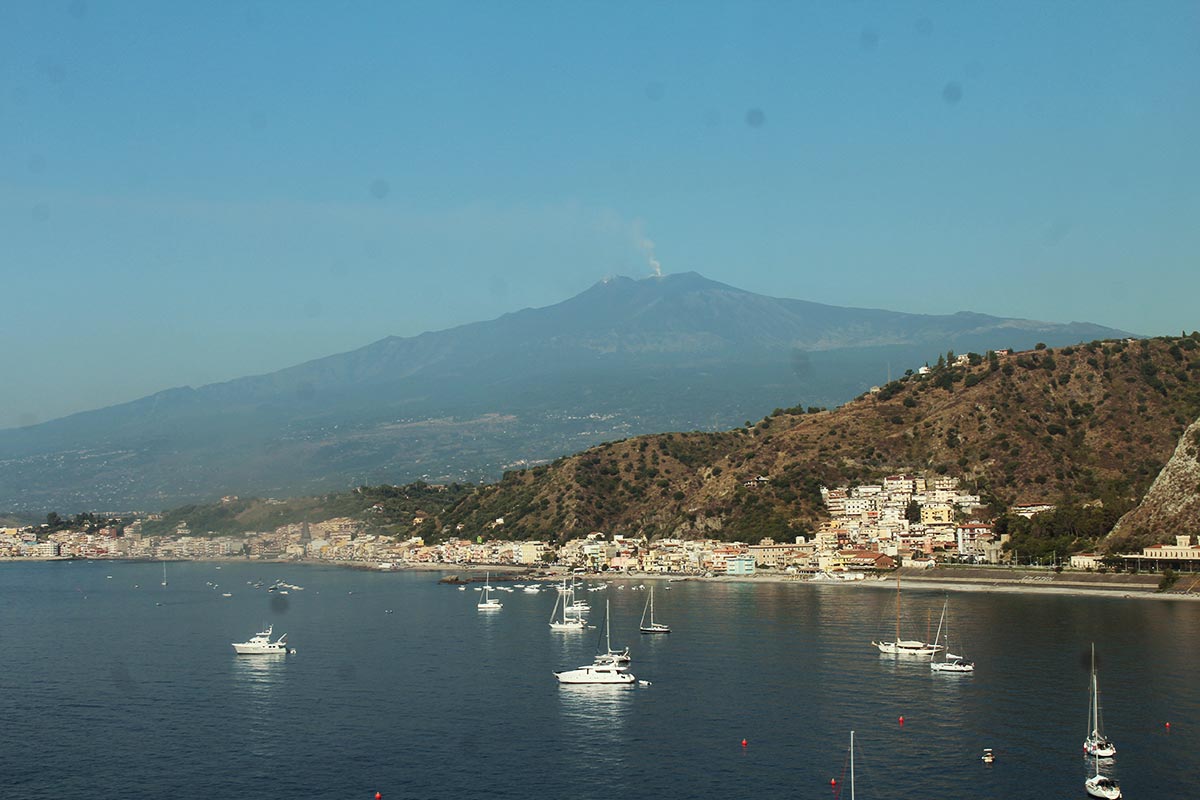 The town of Taormina, shadowed by Etna.

The first time I saw Etna smoking was when it towered behind Taormina, a coastal town made famous when Audrey Hepburn and other glamorous Hollywood legends vacationed there. On this occasion, I was curious to taste the real Sicilian cannoli, so I followed my nose to Pasticceria Roberto, specializing in the dessert. Roberto greeted me from behind the counter. With a shirt that read “Il Mago dei Cannoli” (“The Cannoli Wizard”) and a wide smile, he told me his family has been making pastries for three generations, and that he’s personally worked in the business for 30 years.

There were several sheets of fresh cannoli shells on the table. Roberto filled them with ricotta and dipped them in powdered almonds. His secret to making great cannoli is to prepare them on the spot for each customer. And I can verify this is true—one bite and I was in cannoli heaven. 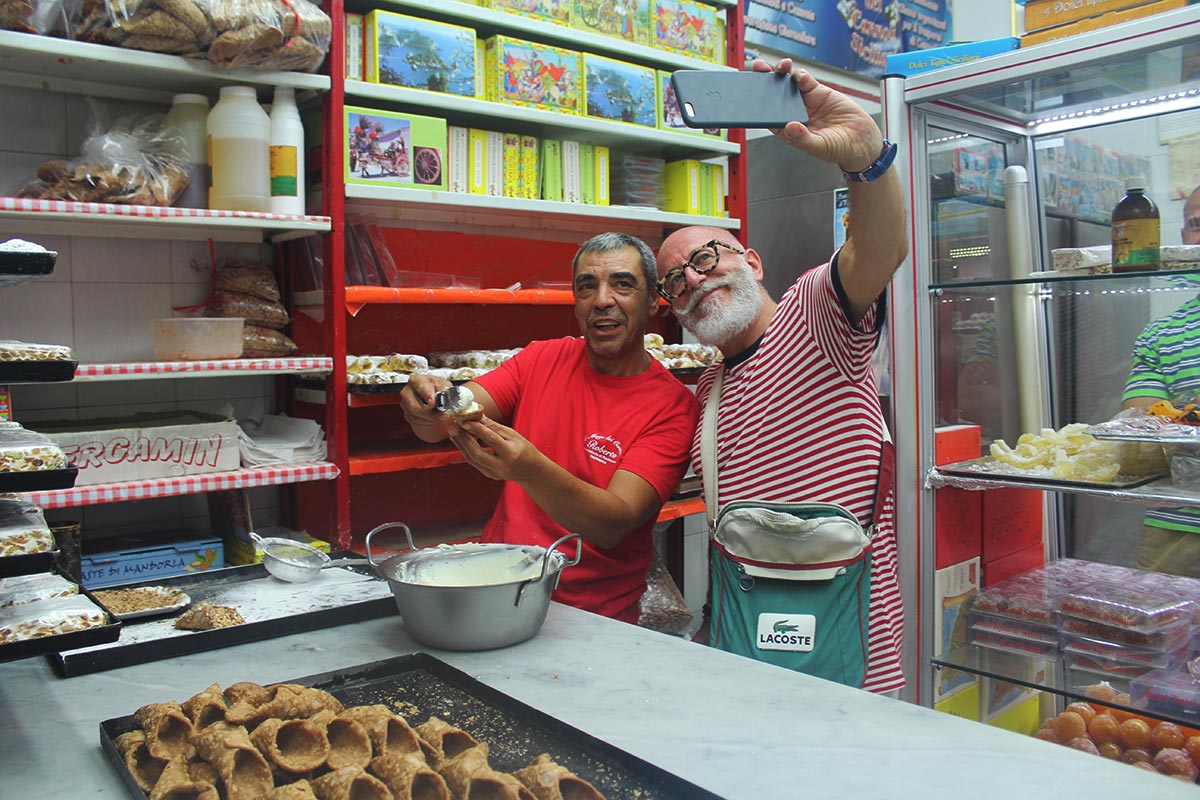 The only thing that woke me from my stupor was the aroma that hit me next. It was the mafiosi, pistachio dough balls named after the infamous Sicilian mobsters, which had just come out of the oven. “It’s too bad you can’t capture the smell with your camera,” Roberto quipped as I took a photo of his tasty creations.

When I asked him about his use of pistachios, he mentioned he sources them from Bronte, a town about 65 kilometres away. We got caught up in a long chat and his shop soon filled with hungry locals and tourists alike. Nevertheless, he still took the time to joke around with everyone and pose for selfies. Letting him get back to work, I said arrivederci to my new friend and thanked him for adding an unplanned stop to my itinerary: Bronte.

Bronte is a small village on the slopes of Etna, which has avoided destruction by its fierce eruptions three times. On this day, the volcano seemed a little too quiet for comfort, but the drive provided some majestic views to soothe the worries of impending doom. In the heart of town, I stopped by Nove (which in Brontese dialect means “surprise”), a shop with locations in Bronte and Taormina that sells all things pistachio. They are masters in the traditional Brontese filletta, a sort of pistachio pancake with a recipe that from the late 1800s that’s been passed down for generations. 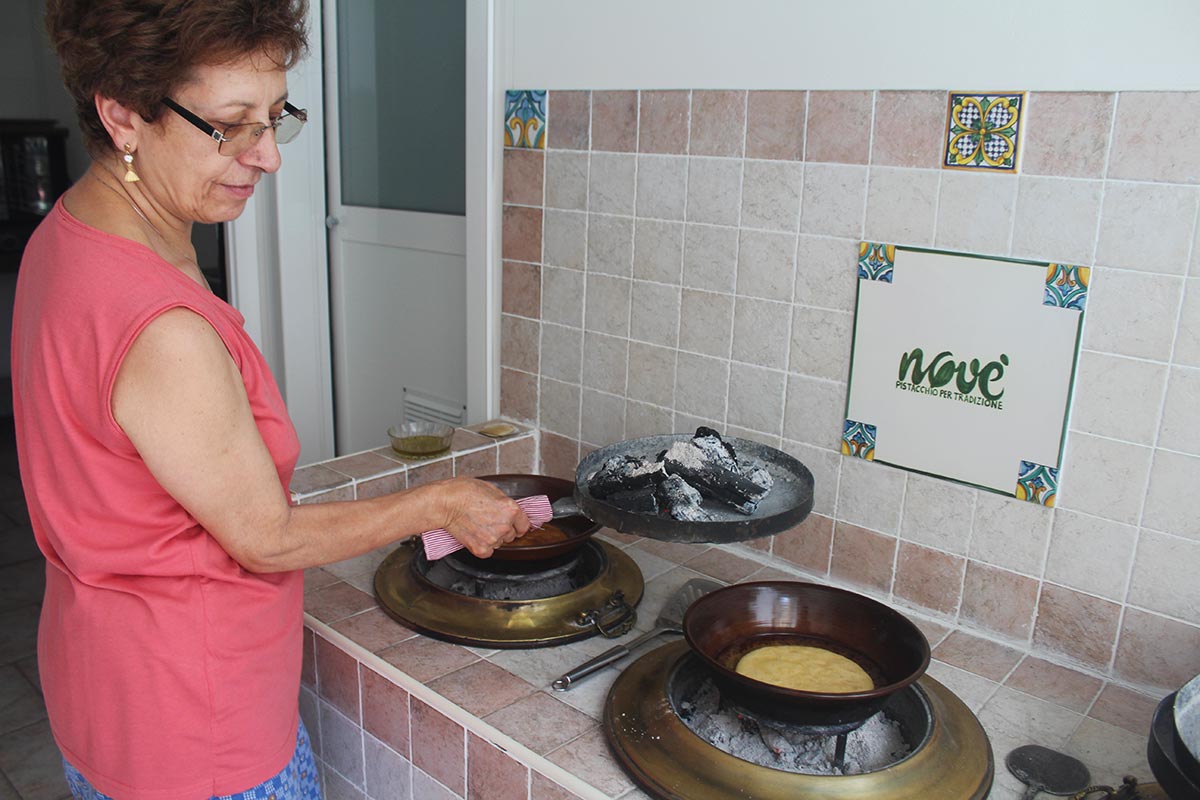 Rosa, the owner, showed me firsthand how to make it in a copper pan placed on hot ashes and covered it with a lid and coal embers. After my taste buds had done their fair share of research, her husband Placido dropped by. When I embarrassingly admitted that after all of this, I still had no idea what the pistachio plant actually looked like, Placido insisted on taking me to their farm.

To my surprise, the bearer of green gold is a tree a couple of metres high that somewhat resembles a fig tree. The resilient plant has thick foliage that needs little water and thrives on steep volcanic terrain and scorching Sicilian summers. The mature fruits are green with red splashes and carry the shell and edible seed inside. Pistachios are costly because their harvest is tedious (the fruits are all hand-picked) and takes place every other year in September—it’s important to let the trees rest because of the tough conditions.

When I asked Placido if he’d been working with pistachios for a long time, he laughed. “I think I did my first harvest when I was about 10 years old,” he said. To this day, the harvest involves townsfolk young and old and culminates in one giant pistachio party.

In true Sicilian hospitality, Rosa and Placido invited me to have lunch in their home next door to the shop and made sure to send me on my way with a doggy bag full of pistachio goodies. As they said goodbye and entered their home for siesta, I couldn’t help but smile reflecting on the day and catching one last glimpse of their adorable vintage Fiat parked in the garage. The colour? Pistachio-green, of course.

A Tale of Two Vespa Crashes

The Caribbean is Open for Business, Just in Time for Winter

Carla how lucky you are to live all these adventures in wonderful places and how lucky we are to enjoy them so much all these places because of your wonderful way to tell us your stories. ! Thanks a lot! 😊

Thank you for reading and for the support! :)

I’ve visited the base of mount Aetna’s bronte and it produced some of the world’s finest pistachios that locals call them green gold. They’ve even got their own twist on the classic arancini which is like Sicilian Street food and it’s got like pistachios on top. It’s a risotto ball that’s been fried. Very delicious.

Pistachio arancini is probably my favourite deep-fried food of all time… I’m glad you also got to visit Bronte. Thanks for reading!