The West Coast Trail is a 75-kilometre backpacking route that follows the southwest coast of Vancouver Island. Consisting of sandy beaches, coastal rainforests and steep slopes, the West Coast Trail has developed a reputation for being one of the most gruelling treks in North America.

Hiking the West Coast Trail calls for a high level of expertise and endurance – something only the most experienced backpacker would possess. The irregular trail, which consists of 70 ladders, 130 bridges, and four cable cars, requires hikers to cross deep ravines and navigate the great wilderness.

But not to worry, the hike is definitely worth it! Attracting more than 5,000 backpackers each year, the trail offers the chance to explore all the tidal pools, forests, caves, and waterfalls that the coast has to offer. Exploring the trail’s natural features is an adventure in itself.

Not only does the coast’s geography lure backpackers, but so does its history. Originally, the Aboriginal Peoples of the Nuu-chah-nulth group inhabited the west coast of Vancouver Island. However, when Europeans arrived in 1778 the coast’s climactic conditions turned ugly, resulting in many disastrous shipwrecks. The area quickly developed a reputation as the “Graveyard of the Pacific”and the West Coast Trail was constructed in order to help save any future shipwrecked victims. Then in the late 1960s, the trail became part of the Pacific Rim National Park in British Columbia. 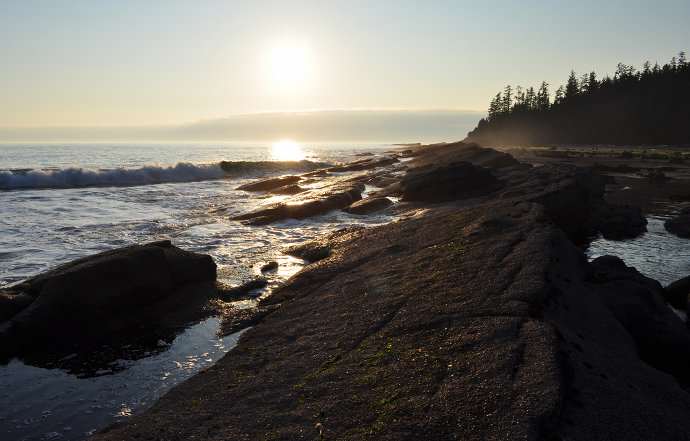 A glistening sunset after a long hike.

The West Coast Trail usually takes between five and seven days to complete, depending on how leisurely the backpacker wants the experience to be. Generally, starting from the north at Pachena Bay is much easier than the south at the mouth of the Gordon River, as the northern half is much less strenuous. Alternatively, backpackers also have the option of starting at a mid-way point at Nitinat Narrows, a three-day journey from either end point. Nonetheless, all three starting points can only be accessed by ferry or water taxi.

With its intriguing history, unique geography, and spectacular scenery, there is nothing more rewarding than completing the West Coast Trail. It may be a hard, arduous journey, but it’s an experience you won’t regret.

So, are you up for the challenge?