How I Survived Three Days of Being Penniless in Norway

When I arrived in Oslo at dawn, bedraggled from my overnight flight from New York, I expected the brusque line of interrogation that sometimes accompanies the border-control ritual. The agent, a woman of perhaps 40, began with the typical questions: “Why are you here? How long are you staying?”

But when I told her I was starting a two-month couchsurfing adventure across Europe, she smiled and told me I was crazy. After a minute or two of amused small talk, she stamped my passport, wished me luck and laughed as I entered the European Union.

The simplest transport from Oslo’s airport to the city itself was a high-speed shuttle train. The cost was steep, but the train was clean, fast and included Wi-Fi. Getting on the train, however, proved trickier than expected. A small army of polite machines guarded the tracks, but when I inserted my credit card to buy a ticket, they repeatedly asked me for a PIN. As an American, this was akin to asking for my third arm—I didn’t have one, and I didn’t know anyone who did. I was accustomed to PINs for debit cards, but our credit cards only required signatures, and most didn’t even have chips at the time. 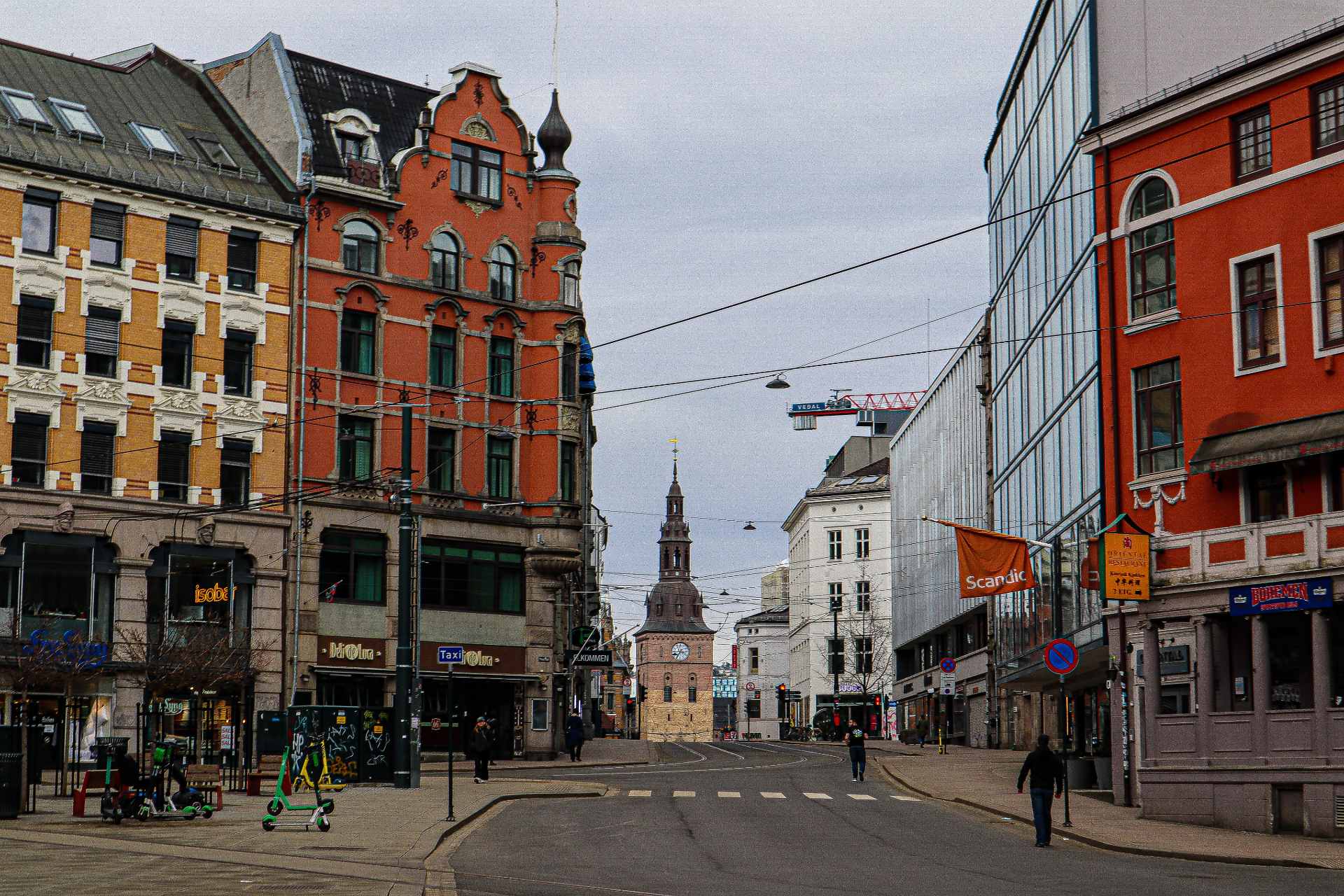 There was no way to convince a machine that my card required neither a chip nor a PIN, so I resorted to the fine art of pantomiming confusion through exaggerated gestures—head scratching, shifting my weight from leg to leg with my hands on my hips, etc. It’s rarely a useful tactic, but, fortunately, it worked this time. A nearby employee witnessed my performance, took pity on me, and brought me to a counter where I could swipe and sign in the traditional, apparently foolish and unsecure American way.

My host for two nights in Oslo was called away on business at the last minute, leaving me friendless, but remarkably not homeless, in Norway. Even though we’d never met, he left a key and a map for me at the train station along with a note welcoming me to my “new home.” I was stunned, but certainly not going to reject his trusting generosity.

I dropped off my bags and headed straight out to explore. My mysterious host also left me his monthly bike pass, so I spent the day pedalling around the small, hilly city, fuelled by adrenaline. 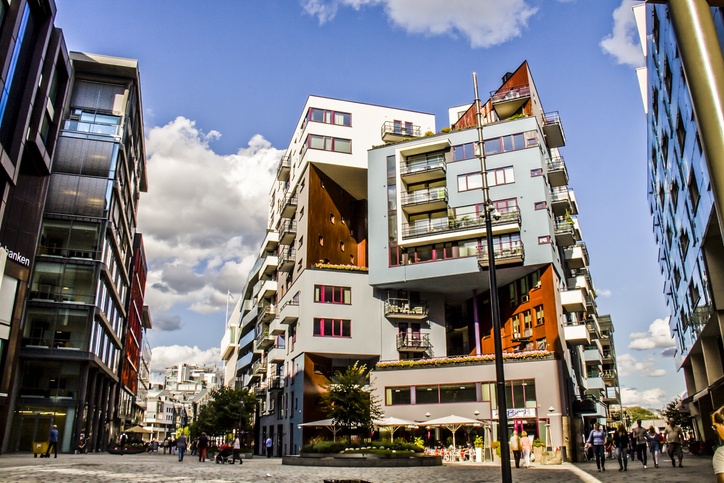 Building in Aker Brygge, a popular area for for shopping, dining, and entertainment in Oslo, Norway. (Batalina-iStock)

By night, I realized I hadn’t really eaten or slept for nearly 36 hours, so I returned my bike and walked up to a restaurant window to scan its menu. Oslo is the most expensive city in Europe, and, after perusing just a few menus, dining out was quickly stricken from the agenda. My limited budget needed to sustain me for 60 days, so stop number one of this Eurotrip would need to consist of grocery store bargains.

The sticker-shock of bananas selling for $5 each was eye-popping, but I needed to eat something, so I picked out the least expensive morsels and headed to the checkout counter.  I swiped my card and, prompted to enter my PIN, explained to the clerk that I didn’t have one and asked to sign instead.

“I’m afraid that’s not possible here. We can’t accept payment without a PIN.” Polite, but firm. Apparently my ability to sign at the airport was an anomaly that wasn’t to be repeated within Oslo’s shops.

The embarrassment of not being able to pay was nothing compared to the realization that I would have no access to money in this city. My credit cards didn’t have PINs, and my debit cards didn’t have chips, so I couldn’t withdraw cash, either. I’d had a modest upbringing, but I’d never known an existence of true pennilessness, and as the implications of having no purchasing power flooded my mind, I felt foolish in my lack of preparation, isolated in my helplessness, and a bit dizzy.

I returned to the apartment.

Afraid of violating an unspoken trust, and already so grateful for the tremendous welcome I couldn’t have imagined from a stranger in my own country, I did not scavenge my host’s kitchen. I drank a large glass of water and went to bed without a eating for a second night.

On my final day in Oslo, it rained. A lot. Cold and wet with a hollow stomach, I only managed to explore the city for a few hours before discomfort and hunger drove me back to my temporary home, defeated, where I would lay low until leaving for Stockholm the next morning.

When I turned the key, I was greeted by my host’s friend, Vegard, who had arrived from the woods where he lived full-time, emerging for sporadic weekends to work as a waiter for little cash. I also met Susanne, who was apparently living in this apartment for a short time, too. Susanne was leery of the couchsurfing lifestyle and had never encountered it before. It was as new to her as it was to me, foisted upon her by my absent guardian. “It’s a bit strange having people you don’t know in your house. No offence.” She wasn’t unkind, just honest.

Susanne was hosting a small get-together with a few friends that night, and she invited Vegard and me to join. One of the great rewards of couchsurfing is the chance to meet people in foreign places, so I showered and prepared for my first Norwegian house party, glad for the distraction from my starvation.

I made six new friends that night. I learned that Vegard and I shared a birthday, and that Susannah and her friends loved dancing to retro American music. I also ate my weight in potato chips, peanuts and crackers, devouring junk food as I hadn’t since I was a child.

Toward the end of the evening, the girls invited me to go dancing with them, but I would be leaving very early in the morning, so I offered to clean up while they were out. We said our tipsy goodbyes, and I gathered the empty glasses and wine bottles as everyone left. When all that remained of the mess were the snacks, I sat on the sofa and finished every last crumb before setting up my bed, my belly full for the first time in days.

I never found out what Norwegian restaurants were like. But by “admitting defeat” and turning in on that last day, I found much more than I would have as a city tourist. Spending a day indoors, I found friendship and experienced the life of young Norwegians, talking to Susanne for hours about her education, career, family and goals. And I began to uncover what would become the most important lesson of the two months ahead: recognizing limits is not defeat. It’s progress. Adaptability is often the key to surviving and to thriving.

Susanne returned home a little past 3 a.m. and tiptoed into the living room, where I was sleeping on a fold-up. “I’m sorry to wake you and I know we already said goodbye, but I just wanted to thank you for spending time with us today,” she whispered. “I didn’t realize how much I needed to talk, even about nothing in particular. I thought hosting couchsurfers was crazy before tonight, but now I’d do it again.”

I would have found none of this in Oslo if I’d had any money.