How to Buy Groceries in the Mediterranean | I experienced a sudden reunion with consciousness when I felt my wife elbow me in the ribs. She was shaking me hard by the shoulder, and I removed one earplug just in time to hear her mumble, “Doorbell.”

And then I heard it for myself: an irritating ring like a school lunch bell, reverberating down stone hallways from somewhere deep within the house.

My brain was filled with cotton wool, but I managed to grab a pair of pants and a shirt as I stumbled towards the bedroom door. I had no idea what time it was, but it felt like the sun had recently come up.

Somewhere in my head I was assuming it was the girl from Malta Post—the cute one with dark curly hair and aviator sunglasses—and that she was bringing me a shipment of books. She often showed up at 8 a.m., but being a late night writer, I was never awake.

And so I stumbled down the hallway, pulling on my pants as I went. Now keep in mind that we were renting a palazzo, and the front door was half a block away from our bedroom at the back of this sprawling house. I got there slightly out of breath, with my heart thudding in my ears. I unhooked the giant cast ir on bar and opened the heavy wooden door.

And I squinted into the early morning sunshine and saw… an old lady with a baby’s pram filled with a handful of vegetables. 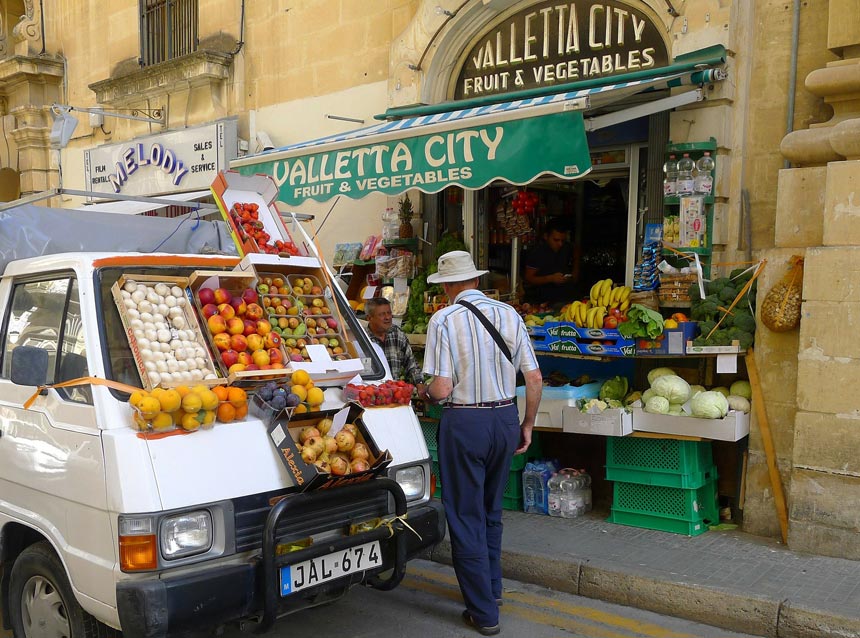 She looked up at me with a smile and said, “You want squash?”

I mumbled something and shook my head, still trying to process just what the hell was happening. When she said it again and held the giant gourd out to me, I automatically took it, reached into my pocked, and gave her the euro coin she was demanding.

“You want carrots?” she asked next.

I dropped the squash on the kitchen table on my way back to bed, and took a quick glance at the clock. It was 6:30 a.m.

I thought this had all been some kind of bizarre dream, but sure enough, the squash was there when we emerged late that morning. It had “€1” drawn on the side with black marker. And it regarded us accusingly from the centre of the table, castigating us for laziness without saying anything at all.

This was our first experience with vegetable vendors on the island of Malta. We hadn’t yet learned that they came door to door. In fact, we hadn’t eaten very much at all, because the shops always seemed to be closed.

And so I share this expat advice with you today, so you will never starve if you move to a Mediterranean island.

Food purchases in Malta can be roughly divided into commodities bought from roving vendors, and stuff you buy in shops.

When you live in a village, you’ll need to figure this out very quickly, or you will be hungry for much of the time.

The first vendor to come to your attention will be the bread guy, mostly because he sits outside your house in the street blaring his horn at sunup.

That agonizing drone which sounds like someone fell asleep on the steering wheel is the call that summons old ladies from every doorway to purchase their morning loaf.

The bread guy is like some sort of geriatric Pied Piper. I had the misfortune of being awake once to witness his delivery, and I saw flocks of old ladies I didn’t even know lived in our neighbourhood.

Maltese people love fresh bread, and they eat it with every meal. It’s always the same: a round white, slightly salty loaf, and it only tastes good when it’s fresh. And so the bread guy drives around in his van, winding through small village streets, first thing in the morning and again around 4:30 a.m.

Vegetable vendors sometimes come to the neighbourhood too. They drive large open-sided trucks with veggies displayed in baskets and boxes. Some vendors circulate through the villages, stopping at the same places and sounding their horn. And others park their trucks in a roundabout and never move from there.

These mobile vendors come every couple days. But they also drive down the road with their produce uncovered, amongst all the dust and black car fumes that clog the air on an island without emissions standards.

The thought of all that filth leaves a diseased taste in my mouth. And so we prefer to buy our vegetables from a shop. More on that in a moment.

During the brief 3 or 4 months of damp Mediterranean winter, you’ll also want to listen for the gas man. There is no central heating in Malta, and houses are “warmed” with small portable propane heaters which run off a gas cylinder, like you’d use for your barbecue.

The gas guy brings his truck around the neighbourhood once a week. And if you miss him and run out, you’ll spend a lot of time huddling under blankets. While this can be a great excuse for a little afternoon delight, you will develop bedsores if you have to spend the entire winter that way.

He’s pretty irregular, so you’re better off finding out where he does his half day each week. You can usually find these big trucks in each village, at a busy roundabout or main road. They park there every Saturday morning for about 3 hours. And because these vendors have a monopoly, this is your only chance to buy gas for the week.

Finally, we come to an elusive phantom known to locals as the Bigilla man. Bigilla is a local snack made from crushed fava beans, with a sprinkle of chilli and olive oil. It’s only good when eaten hot, fresh off the back of the truck, spread on a cracker or on a chunk of bread.

The Bigilla man announces his presence with a recorded cry from the speaker on top of his van. My wife swears that this voice says, “Tal-bigilla!”, but I have never heard this no matter how hard I try. And I know she only believes in it because our cleaning lady Josephine told her with great conviction.

You’ll hear this ghostly recorded cry echoing down winding village streets, reverberating off stone walls, and seemingly coming from everywhere at once. And you’ll follow it through the village core like the song of the Sirens, down dead end alleys and double-back streets, until you’re thoroughly disoriented. But in spite of your most earnest efforts, you may never see the Bigilla man at all.

That’s it for the roving vendors. Now we turn to local shops.

Most villages have separate shops for everything, as though they were based on medieval guilds. And you’d think that simply walking into a store to purchase necessities would be a straightforward procedure. But alas, you would be wrong.

Take our butcher shop, for example. On Monday he’s only open in the mornings. And on Tuesday he opens after 4 p.m. The other days are equally irregular, but everyone seems to know his hours, and to show up at exactly the right time. I don’t know how they keep it straight without a chart.

Maltese people eat a lot of pork and chicken, and you’ll find a very good selection of both at the local butcher. Beef can be more hit or miss, and it often comes from Ireland—I guess because Malta is too small to play host to cows.

The local fish shop runs along similar lines as the butcher, though in our current village his hours are a bit more regular.

Oddly enough for a people who live in the Mediterranean, the Maltese don’t eat very much fish. They prefer deep fried fast food and pasta. But when they eat fish, they tend to consume whitefish like sea bream and sea bass, always prepared in exactly the same way: baked or grilled, with olive oil, tomatoes and capers.

Those are the staples, but you can also find good tuna steak, swordfish, imported farmed salmon, and things like octopus and squid.

The shop that my wife visits the most—several times each week—is our neighbourhood vegetable vendor. We have a very good one in Zurrieq, right around the corner from our house.

He buys directly from local farmers at the cruel crack of dawn each morning. He’s very proud of the products he sells, and he knows exactly who grows what, how they farm it, and which farmers produce organically. He sources the very best local stuff, like strawberries, eggs and snails. And vegetable vendors in Malta also give away parsley and celery for free, and sometimes basil too.

But Malta is a very small island, and much of our food comes from abroad. The best time to go to the vegetable shops is Monday and Thursday, because that’s when the boat comes from Sicily. If the ferry doesn’t arrive because of rough winter weather or mechanical breakdown, then the shelves will be bare, and sometimes the shops will close.

So there you have it.

This system can seem completely baffling at first. Especially when you’re figuring it out on your own. But there is some sort of twisted logic to it, and it does function, more or less.

Your village life will become much easier when you get to know the vendors—and when you train those damned old ladies to stop ringing your doorbell before the crack of noon.

The pram lady eventually got the message, but not before blindsiding me on two or three other random mornings when I was so tired I didn’t know my own name.

Oh, and you want to know the worst thing about that early morning squash that arrived at my door?

It was stringy and watery, and it didn’t taste good at all.

Creepiest Places in the World | Part 1