If you make only one wild decision in your life, decide to go on a RTW (’round the world) trip. If you make two, go twice | This is the first installment in a five-part series on How to Travel RTW (round’ the world).

When I was 13, a distant cousin from England arrived in Toronto with a satsuma-coloured tan and a backpack large enough for me to crawl inside. The 20-something-year-old explained that she was on a year-long, RTW trip and my jaw dropped open with such force that one of my braces’ elastics snapped. “Around the world? For a year? You can… like… do that?”

Fast forward nine years: I’d just dropped out of university for the second time and was employed as a waitress when my then-casual friend called me one afternoon, jet-lagged yet elated after having returned from her inaugural backpacking trip only a few hours prior. As I had embarked on a couple of indie travel adventures myself, the two of us giggled fondly over the exhilaration of life unleashed. 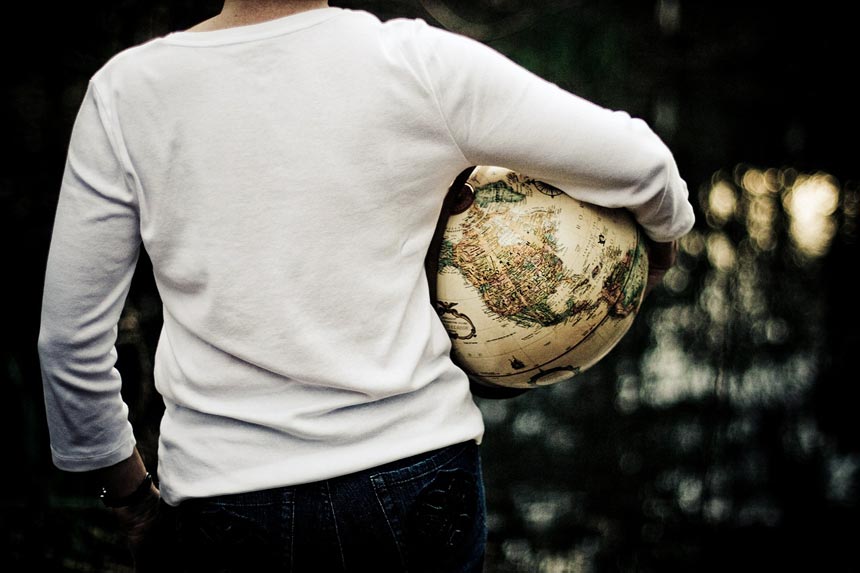 It was then that I remembered my satsuma-coloured cousin and off-handedly asked if my friend would be interested in embarking on a RTW trip with me. She agreed that instant, and it would come to be the most rewarding decision we’d ever make.

A few weeks later, we congregated on her bedroom floor with homemade cookies and milky tea to kick-start the planning process. First, we wrote out a list of every country we wanted to visit—and were utterly crestfallen when we realized it would take us approximately three years and $70,000 each to see them all. Eighteen months later, however, we had a solid plan, a workable budget… and boarding passes clutched in our clammy, trembling hands.

Ask yourself: where do you want to go?

If you’re like most wanderlusting travellers, then your answer is probably “Everywhere.” Yet no matter how much time and money you’ve set aside for your RTW trip, it never seems to be enough to do it all. Here are a few ideas to keep in mind when (sorrowfully) narrowing down the scope:

Depending on how quickly you move, one example of an itinerary would be Latin America (either southern Mexico to Patagonia or a South American loop) for five months, India and Nepal for two months, and Southeast Asia for another five months. The traditional Thailand/Laos/Cambodia/Vietnam route takes most people two to three months, while India and China require at minimum one month each. That said, you could easily spend your entire year in Latin America or Asia if you would rather a deeper immersion in one macro-culture.

No matter how hard you strive to avoid it, you will probably find yourself travelling in monsoon season at least once. But this doesn’t necessarily mean you’ll be backpacking in your galoshes. In certain areas, it only downpours for an hour each day, and is warm enough the rest of the time as not to greatly impede your adventure. Furthermore, backpacking during shoulder season (the time between high and low season, when the weather is typically not at its finest) means lower prices and fewer crowds. Consider what activities you’ll be engaging in and whether your parade can in fact withstand a little rain.

While nobody likes to be told to do their homework (did I mention I dropped out of school twice?), it is vital you know where you’re going so as to understand what you’re looking at when you get there. This means researching the countries themselves as well as the attractions. If you’re an avid reader or film buff, consider checking out novels and/or movies that the region is famous for producing.

When selecting a guidebook, flip through a few to compare highlights as well as the in-country focus—some publishers concentrate more on natural beauty and outdoor activities while others hone in on culture. Remember, publishers tend to tweak their top lists in every edition despite the shadowed ruins and soaring moutainscapes remaining unchanged; be sure to read the entire book as there are many buried gems listed as off-the-beaten-trail or summarized in a brief paragraph.

If you’re using online resources like Trip Advisor, keep in mind that many people who post are predominantly vacation travellers, not hardcore backpackers, and are less impressed by the weird or rugged adventures that indie travellers seek. Even if you’re not planning on taking any organized tours grab a handful of glossy magazines from your nearest travel agent anyway to use for inspiration (or just Outpost).

Finally, stay flexible: you never know when an incredible opportunity will pop up while on the road and you’ll want to be able to take advantage of it, so allow for leeway in your schedule.

The next installment in this five-part series on How to Travel RTW will be Part Two: What to Do. Stay tuned!

Get Your Australian Working Holiday Visa Before These Tax Changes

Cultural Identity | Should I Change to Fit In?