What happened when our gorilla-tracking correspondent got malaria in the rainforest of Africa? Here’s the facts, just the facts.

Long before tweeting travellers lay awake at night dreaming up ways to go viral, I was regularly going viral without the help of the Internet. Alas, my success was of the IV and rubber-snapping, latex-glove variety; but success it was nevertheless, and I quickly became a legend…if only in my doctor’s waiting room or local emergency department.

There’s nothing particularly humorous about an exotic ailment, especially for those across the planet whose lives are constantly at risk from mosquitoes or unclean water.  But as a true adventurer, a modicum of fully-cured malaria or dash of dengue fever can earn you a free drink at most explorers’ bars.

I’d never ever advocate going out of your way to contract a contagion (just to be uber-clear); but saying you’ve missed the office Christmas party because of trypanosomiasis or schistosomiasis sure beats feigning an in-grown toenail.

I am a huge advocate of travel insurance and have had more needles than a clumsy masseuse at a porcupine parlour. I can speak of the veritable merits of chloroquine, mefloquine and Gin’n’Tonic’o’quine better than most pharmacists, and have on several occasions been told by local ER physicians that I likely know more about malaria than they do. Strangely though, they demur at the suggestion of paying me a consulting fee as they huddle around their notepads when I am self-diagnosing.

Malaria in the Western Lowland Gorilla is thought to have been the precursor for malaria in humans (though Simon’s photos here depict mountain gorillas, the lowland’s nearby cousin).

While most travellers know the difference between an SPF 35 and an SPF 75 sunscreen, I somewhat sadly know that malaria is transmitted by the Anopheles mosquito—not the Culex, Haemagogus, Aedes or Culiseta, duh!—and that like Quentin Tarantino characters they prefer to sup from dusk to dawn.

I also know that the word “malaria” originates from the Italian for “evil air”—and that some believe its fever was the cause of the decline of the Roman Empire (but not the Great Pasta Strike of 1461).

In the jungles of Suriname, a local guide once gave me a piece of bark to chew on before curling up with laughter as my face spiralled into itself like a kaleidoscopic image. The core ingredient of the bark is the puckeringly bitter quinine, and has been used by indigenous tribes forever. In 18th-century India, British officers made quinine more palatable by mixing it with water and sugar as a tonic for their fevers…then threw in some gin for good measure. Though today’s tonic no longer contains enough quinine to fend off a bout of malaria, I prefer to err on the side of caution and down a few anyway, just to be safe.

Short of being bitten by a Bengal tiger, malaria must be the ultimate badge of honour for most tropical travellers. Despite it being amongst the most appalling of diseases in the world today, for would-be Hemingways it tends to be a must-have.

For centuries, the blight once known as marsh fever or ague was lent a certain romanticism by explorers, adventurers and writers who luridly scribed about their night sweats, violent shakes and hallucinations, before donning be-tasselled fezzes and retiring to the opium lounge for a recreational top-up.

It’s that infamy that for many makes malaria top-of-the-chart when adventurers gather over a few flaming sugar cubes and some wormwood spirit and do the old “I’ll see your giardia and tarantula bite, and raise you toxoplasmosis and a Pamplona impaling” kind of brag-fest.

Perhaps absinthe makes the heart grow fonder, but once fully recovered, a dalliance with disease, or visitation with venom, can sometimes be recalled like a favourite exotic delicacy.

Sometimes though, for all your knowledge and care, no matter how many precautions you take you can still fall afoul of the fever. In hindsight, I have had many magnificent maladies, and while none were particularly fun at the time, some have a certain raconteur value now.

There was the jellyfish sting, sea urchin pricks, tsetse fly bite and dengue fever, the second-degree burn, the armpit tick, TB, and the dengue-fever and antimalarial hallucinations, all of which are pretty decent in the one-upmanship stakes—but it took me a while before I’d had the piece de resistance of tropical diseases. 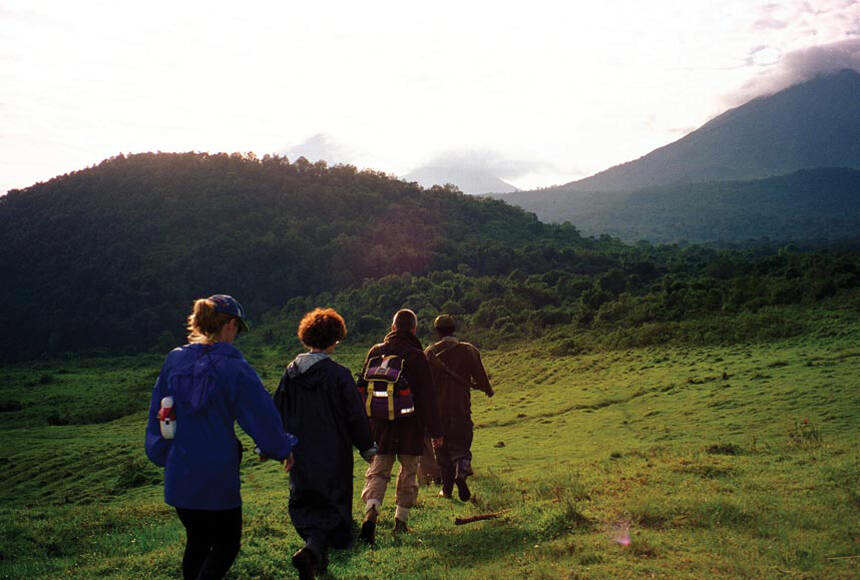 On the search for some gorillas.

As usual, long before arriving in Uganda, I had taken my antimalarials and a whole slue of vaccinations. I filtered my drinking water, kept my mouth closed while showering, carefully selected my food and washed and/or peeled my fruit and vegetables. I covered up in the mornings and evenings, wore light colours, and sprayed hands, neck and face with insect repellent. I pre-sprayed the inside of my mosquito net before retiring and even—oh, horror of horrors!—wore socks with my sandals at prime mosquito-supping time.

And yet, here I was, lying halfway up a jungle-clad mountain having hallucinations of a small man watching me from the edge of the forest through the mesh-flap of my tent.

My head was pounding like the worst migraine I’d ever experienced, and my teeth were chattering as though I was riding an ancient bike over a corrugated track.

The next moment my soaking-wet body spasmed, and I lapsed into a fitful sleep. Then it began all over again. All while the little man looked on impassively.

Initially, I thought perhaps my headache was caused by dehydration after a taxing day tracking gorillas in Mgahinga National Park. Or maybe it was altitude sickness from spending so much time in the Virunga Mountains’ moderate altitude; but once the sweats, chills, shakes and hallucinations kicked in I knew from my vast literary experience of explorers books that it was malaria.

I’d just spent a week in Joseph Conrad’s Heart of Darkness across the border in the former Zaire—otherwise known as malaria central—so it didn’t take a brain surgeon, or tropical disease specialist, to figure out what I had. Still, if I’d actually been conscious, I suspect I’d have been proud of my powers of self-diagnosis. 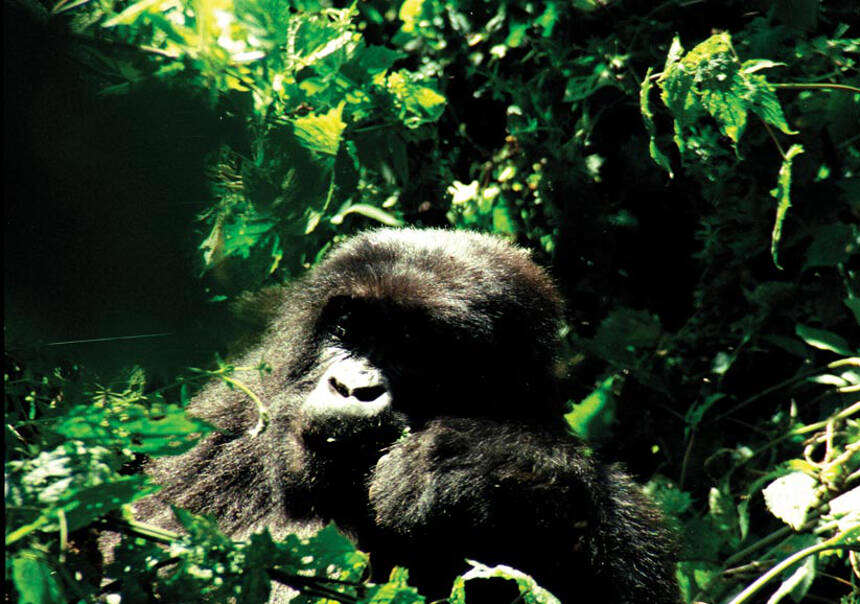 At daybreak I staggered off to find my guide. A veteran of malaria, he promptly agreed with my verdict and gave me some chloroquine tablets. He vowed to keep an eye on me until we reached the nearest hospital, and then I crawled back to my tent to spend the rest of that day in a blur.

By evening I was tired of popping pills under canvas, and so dragged my sleeping bag to the campfire and lay there gazing longingly at the blinking lights of airliners flying 40,000 feet overhead, wishing Scotty would beam me up.

By the following morning, I was feeling somewhat more human, but still as though I had been trampled several times by a herd of directionally-challenged elephants.

I dozed through much of the long drive back to Kampala, and as the shadows drew longer on the capital city’s edges, I came to realize that the worst was over. As I was flying out the next day I opted against visiting the local hospital, and instead chose an early night and promised to go straight to the ER for a check-up when home.

My guide shared his own malaria moments with me.

“Anyone who lives here for any length of time can’t take antimalarials as a prophylactic (preventive) because of long-term side effects,” he explained. “So we just take precautions, and then, if we get ill, that’s when we dose-up on the antimalarials. We have to be able to recognize the symptoms quickly though, as getting treatment immediately is vital. Well done to you for spotting yours so quickly,” he added, clearly impressed by my paramedic prowess.

“When did you first think you had malaria and not just flu?” he asked, somewhat breathlessly.

“The clincher was my hallucination of being watched by a little man,” I laughed, while blushing modestly.

“Oh,” he harrumphed, turning away to collect his room key. “That wasn’t a hallucination. He was a Twa: a Pygmy [an Indigenous people of Equatorial Africa who tend to average only five feet tall]. He guides us on forest walks.”

How to Travel Despite a Weak Canadian Dollar

3 Essential Tips to Make the Best of Your Trip